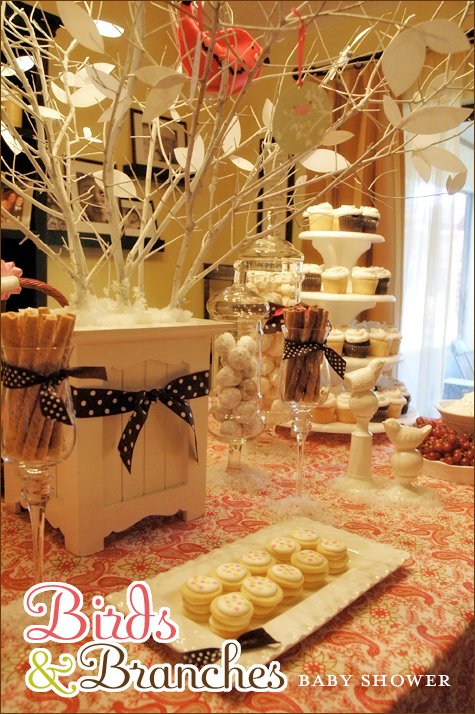 Added bonus: This theme could also be adapted for a “Love Birds” bridal shower or a baby shower for boys or girls hosted at any time of year swapping out some of the colors and winter accents. The centerpiece would be super cute for an Easter table as well! 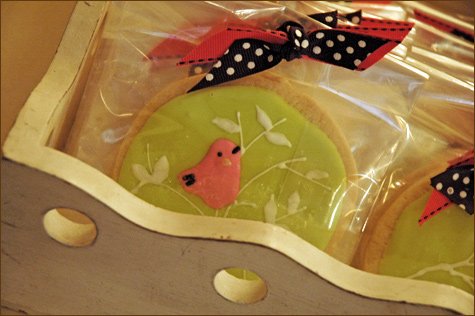 Read on for lots of pics and all the fun details, as told by Jessica… 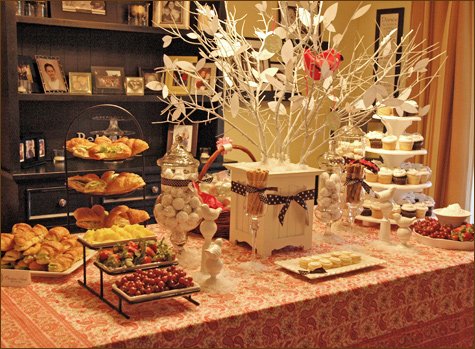 For me, the invitation is the most important detail when starting to plan an event/party. I believe this is a key element in ensuring a good number of attendees as well as providing a platform of inspiration to follow for planning the details of the party/event. 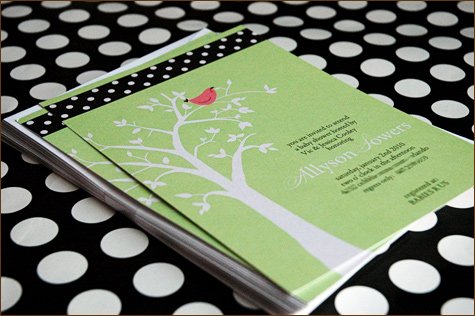 With that said, I designed an invitation using crisp colors & simple lines to reflect the winter season in which the shower was held. I referenced the white vinyl tree decal used on the nursery wall to create/design the tree on the invitation, then recreated one of the birds from PB’s Penelope Bedding and added it to the tree.

I chose a green background on the invite to tie in the green in the crib bedding and created a digital black & white polka dot ribbon along the top of the invite for contrast and “pop” as well as to add a splash of whimsy.

With the invite finished I had 4 focus colors for the party: 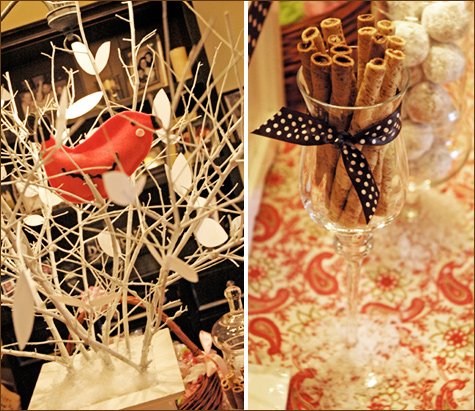 Simplicity was key for this shower. Focusing on a dessert buffet eliminated the need for excessive decorating.

The centerpiece would need to be substantial for the “wow” factor and it seemed a tree was the natural choice to infuse the design elements from the invitation. A DIY centerpiece proved to be cost-effective when I chose a container I already had and spray painted branches from my own yard. (The full tutorial is on my blog). 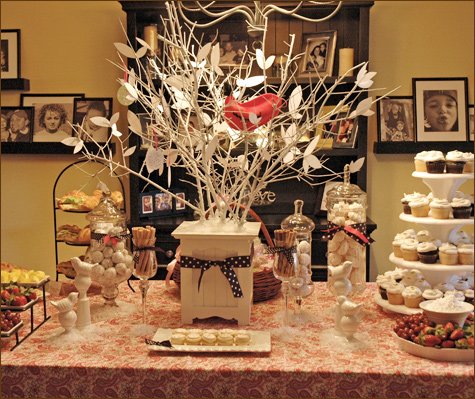 Using a white, pink & green paisley tablecloth from the mother-to-be, I chose to use a combination of white and clear vessels for displaying food.

By hosting the baby shower at 2 o’clock we were able to offer a buffet of simple food items. 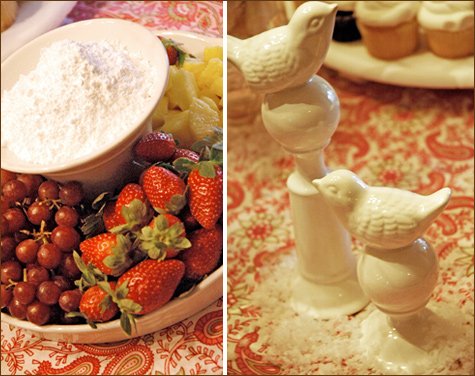 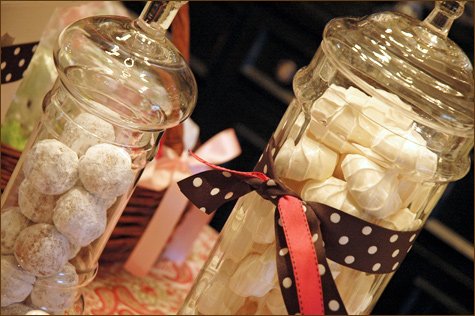 An apothecary jar filled with meringues served two purposes…an easy baby shower game for guests to “guess the number of meringues” and then later as sweet treats. 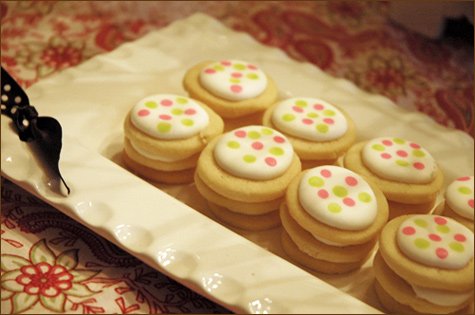 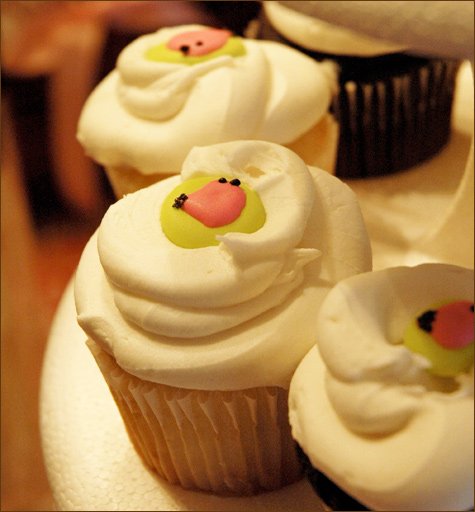 Coordinating food labels for two different types of chicken salad sandwiches were placed on the dessert buffet for those guests who needed something a little more substantial. 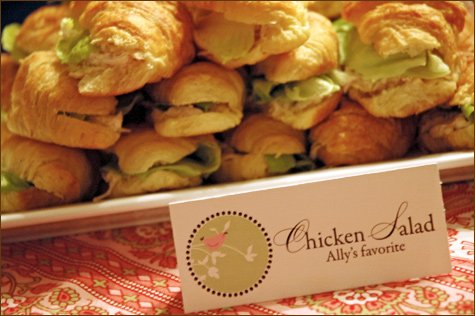 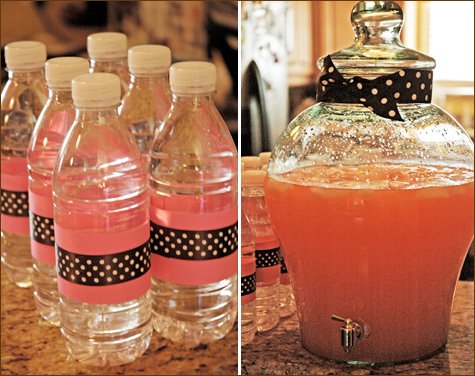 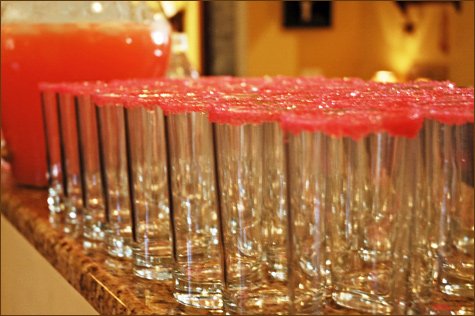 Water bottles were wrapped in solid pink scrapbooking paper along with a strip of black and white polka dot ribbon. 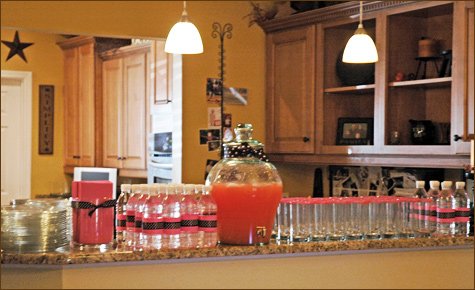 As guests arrived, they were led to a “sign-in” table where they were encouraged to grab a pen and a “wish tag“. 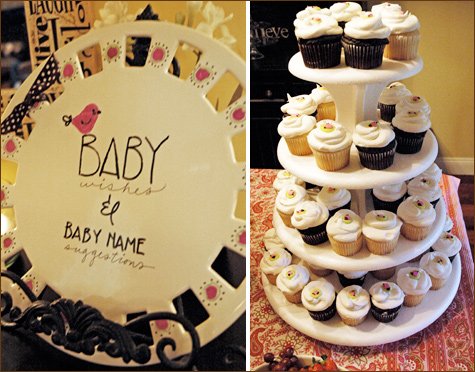 I created the circular wish tags to match the invites and they served five different purposes:

First, the guests were to write a “wish” of some sort for the new baby. Second, guests were encouraged to write down a suggestion for naming the baby. Third, the wish tags were hung on the buffet centerpiece as an added design element. Fourth, the wish tags served as another shower game because one of the wish tags was secretly marked & at the end of the shower a winner was announced. And finally, fifth, these wish cards were given to the mom-to-be at the end of the shower as a keepsake. 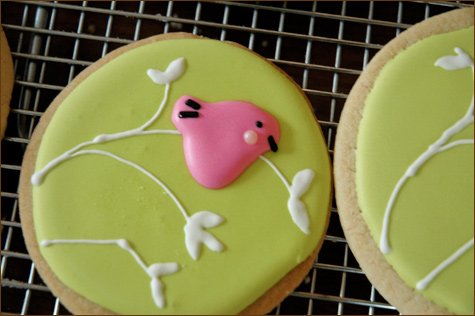 For the favors I decided to make jumbo sized sugar cookies to match the shower decor. The cookies were packaged in clear cellophane bags. For another splash of “winter” I sprinkled white cake sparkles inside the bag to mimic snow.

I stapled the bags closed using matching ribbon and then displayed them in a white wooden tray filled with snow. The tray also had a miniature white christmas tree in the center for the cookies to surround. 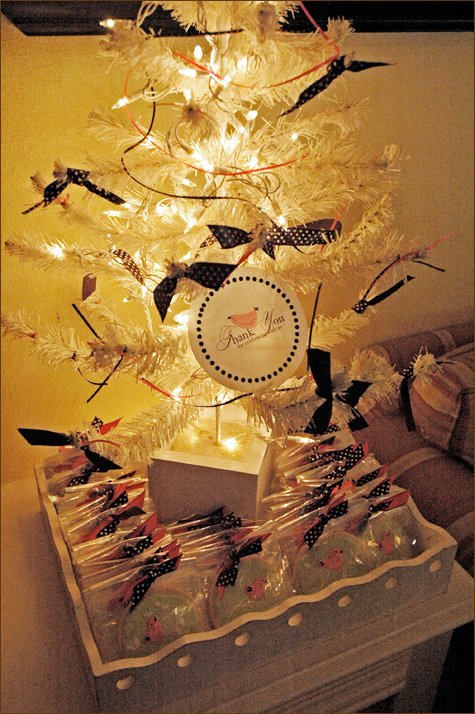 Keeping it simple, I created one large “thank you” tag and placed it in the branches of the tree instead of creating a “thank you” tag for each individual favor. It was just as effective. 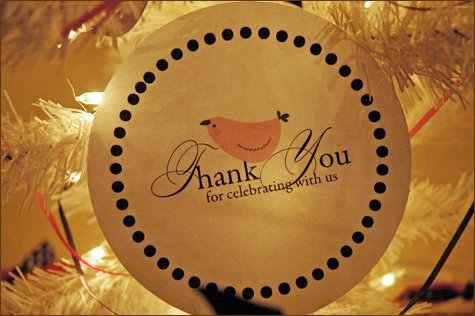 I was repeatedly approached by guests commenting on how simple, yet how beautiful everything was!

• Fake snowflakes – used at the base of the tree centerpiece as well as around jars/vessels/table decor and in the favor tray.
• Ribbon – Black & White Polka dot ribbon in various sizes as well as some hot pink ribbon with black fake stitching. This was used on just about all glass vessels & serving trays, wrapped around the tree centerpiece, on the pen holder at the sign in table & used on the favor packaging.

The beauty of this baby shower is that it can easily be adapted to welcome a baby boy.
It could also easily be transformed into a “Spring” shower by removing the winter elements and adding bits of wheat grass to the decor.”