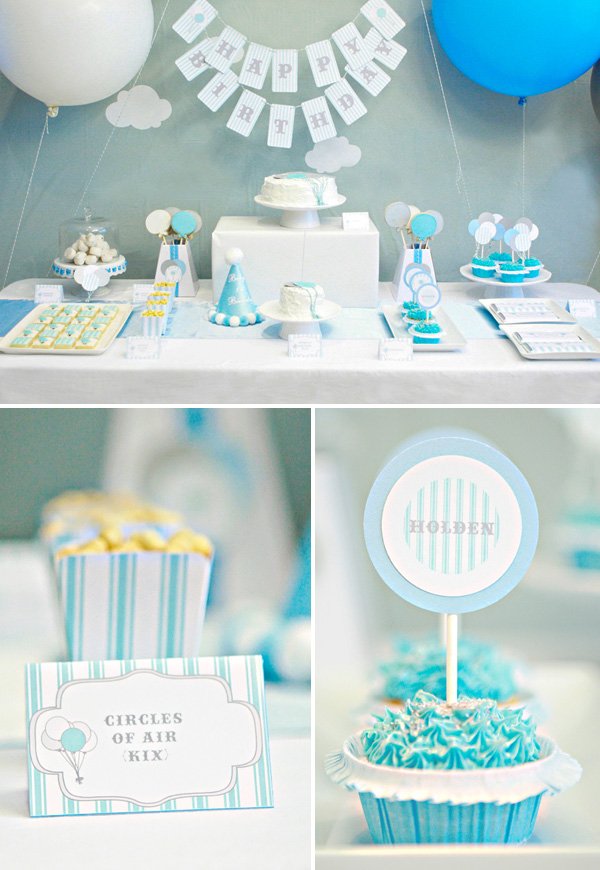 This beautifully designed Balloon-themed Birthday Party by Kori of Paper & Pigtails is sweet, creative, and perfectly suited for a first birthday party! I’m especially in love with the darling balloon-themed cupcake toppers, giant balloon backdrop on the dessert table, and adorable balloon cookies “floating” out of blumeboxes! There are even mini cheese rounds made to look like balloons!

Many elements of this theme would also be perfect for an UP-themed birthday party – or vice versa! 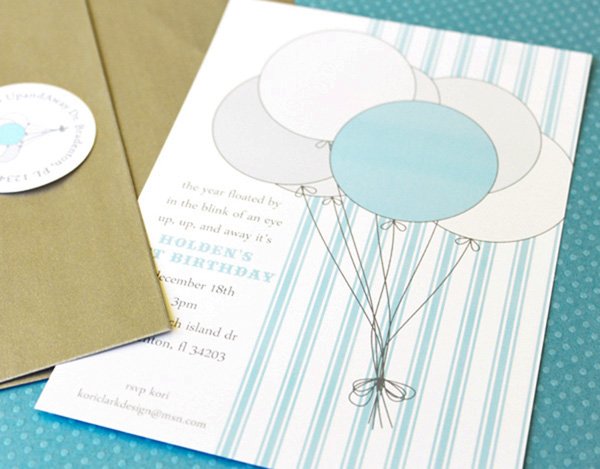 Read on for lots more inspiring pics and all the ultra-creative party details, as told by Kori… 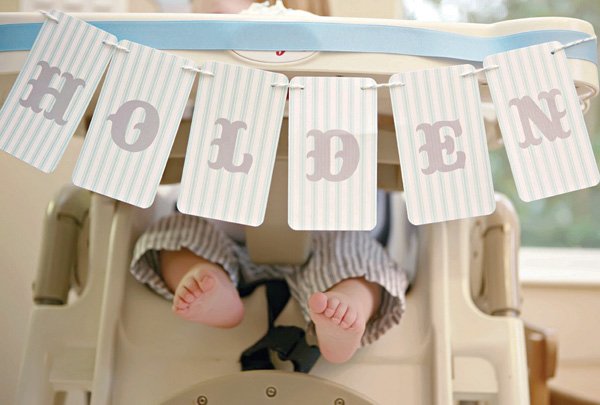 “I wanted a theme that was ‘simple and sweet in nature’ and had a traditional feel. I also wanted to choose something that my son loved, so after a trip to a friends party where he couldn’t stop laughing at the balloons, I knew that would make the perfect theme!

The party started with the invitation design… a group of perfectly round balloons in front of a soft teal ticking stripe pattern set the tone for the party. We used silver, light teal, and whites to keep it feeling seasonal, youthful, and clean. My friend Courtney Vickers did all of the photography!

For party decorations, I found 36″ balloons in our exact colors, which were used behind the food/dessert table, and throughout the party as well as paper circles we displayed like balloons! I used a blue and white yarn as the balloon strings and in many of the design elements. 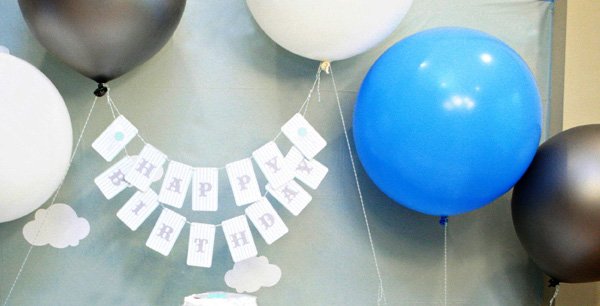 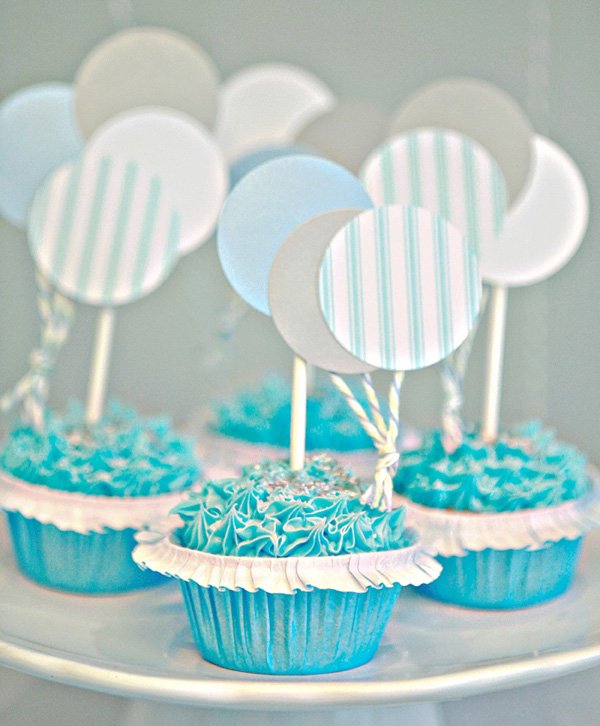 My favorite aspect of the party was the mini banners that were strung above the food table between the balloons and on his high chair. They were printable banners that I designed to be a little larger than playing cards and strung together with yarn. 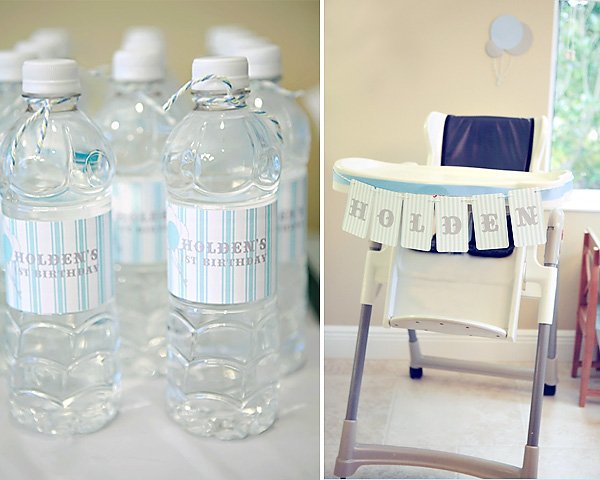 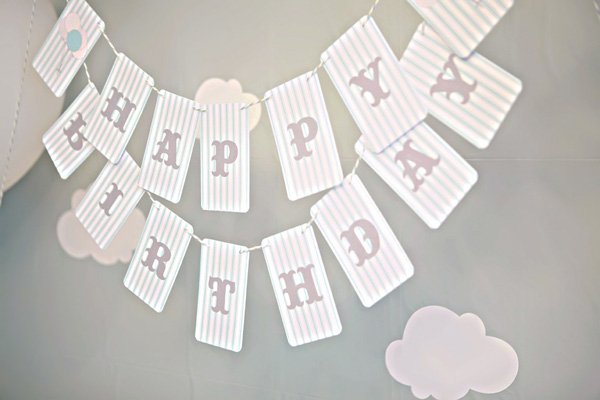 There were also striped and solid table runners from Straight Stitch for the food table and dining table.

As the party was the middle of the afternoon, we had mainly sweets, with a few appetizers. I made the cake, smash cake, and cupcakes. 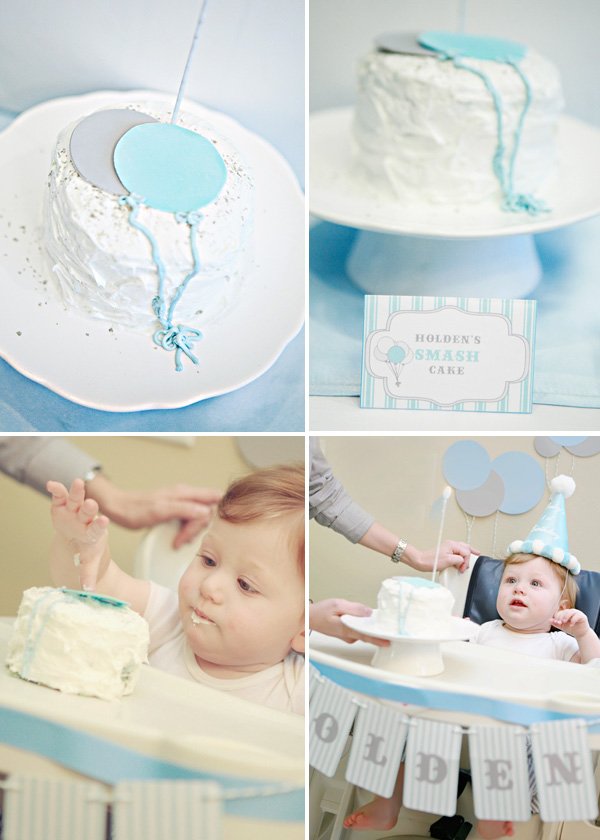 We had some kids with allergies, so I wanted to make sure they were covered and I figured it would allow me to have a little fun baking. Inspired by the ‘rainbow cakes’ I have seen, I used a bit of food coloring to make our cake and smash cake light blue inside. It was a fun treat when we cut into it! 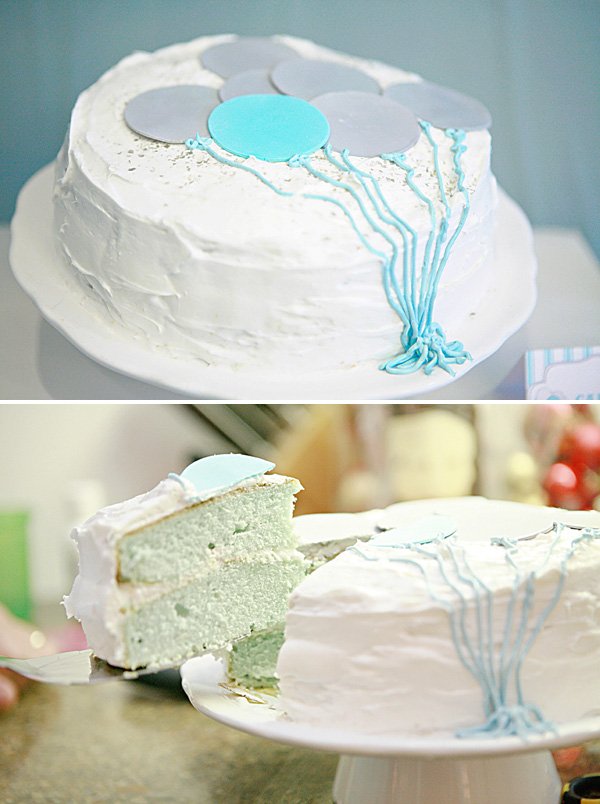 The cakes were topped by fondant circles made by Two Sugar Babies and icing was used for the ‘strings.’ We also had large balloon cookies on sticks made by Bees Knees Creative, ‘circles of air’ {a.k.a. Kix cereal} in paper snack cups for the little ones, and mini sugar cookies made by Better Bit Of Butter, who also used the invitation style to design the cookies! 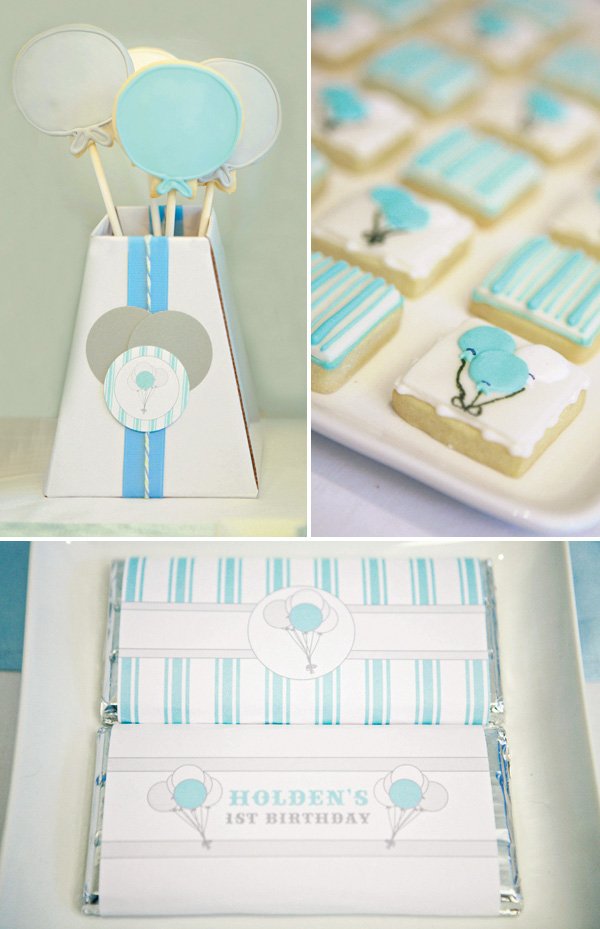 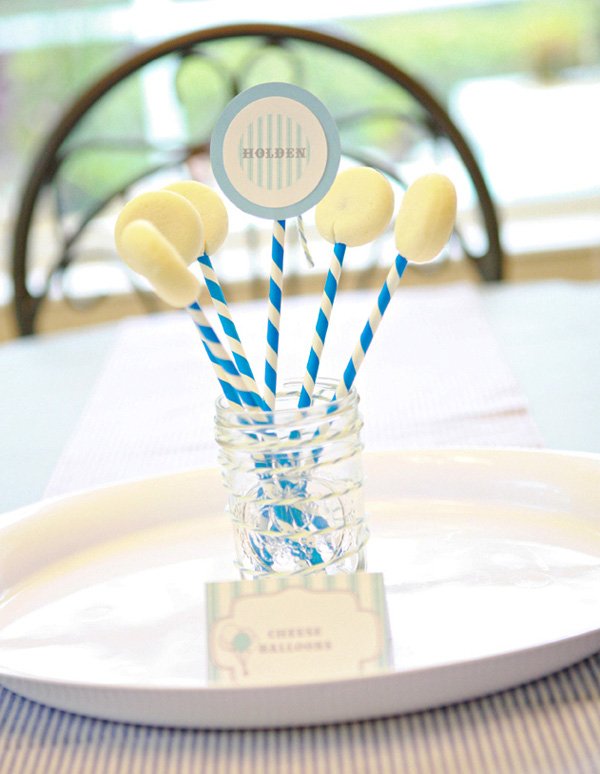 The children played ‘Pin the String on the Balloon’ Even the youngest ones were interested in ‘trying’ to play and watching them ‘help’ one another was just too funny! 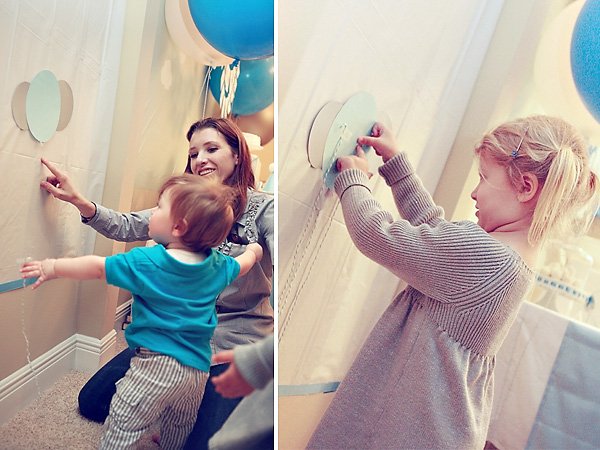 For favors, we sent each family home with Balloon Cookies on a stick made by Bees Knees Creative and old fashioned ‘punching’ balloons. The balloons were placed in silver glassine bags with labels and a balloon design.

At the end of the day, my ‘baby’ had a wonderful time, and I will remember the sweetness of his first birthday for the rest of our years!“