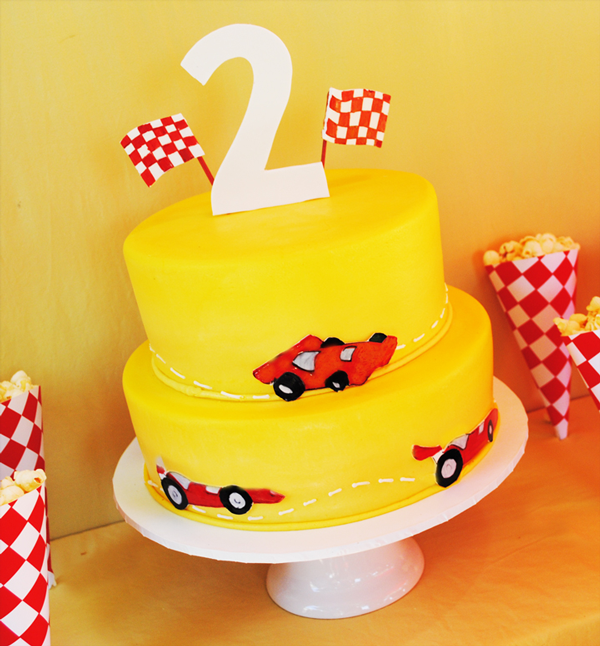 {posted by HWTM contributor Jessica Wilcox}
Being a Mommy of three boys, I love to see creative and colorful birthday parties for BOYS. This incredibly inspiring Race Car second birthday party sent in by Gwynn of Gwynn Wasson Designs gets my creative wheels turning, so to speak! From the super fun “race car” themed activities to the delicious red & yellow dessert table Gwynn thought of everything…this party takes the checkered flag!!

No birthday party is complete without an amazing cake (or cupcakes, which happen to be my personal favorite), and this party is no exception. Gwynn did a wonderful job adding creative touches throughout such as the race car speedway and the blow-up race car filled with cushy pillows. I’m also loving the super fun bubble tins and crayon caddie party favors that the kids can enjoy after the party is over! What little boy wouldn’t love this fun birthday party?!

Read on for more Race Car Photos + party details, as told by Gwynn… 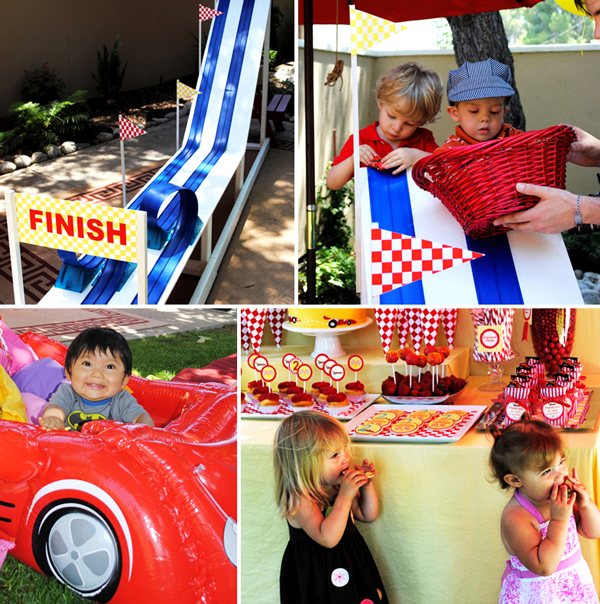 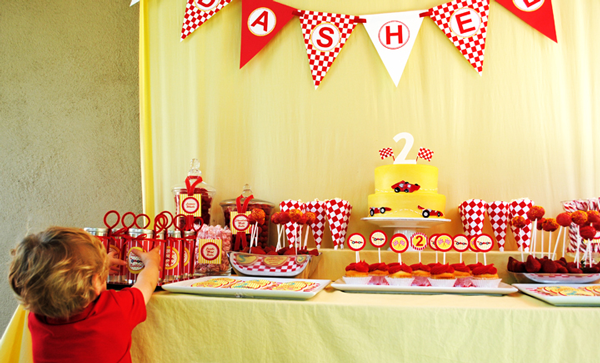 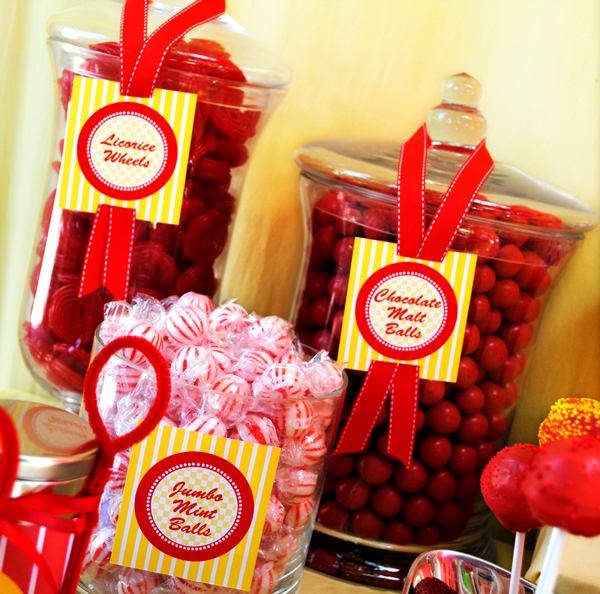 PARTY DETAILS, as told by Gwynn…

PARTY INSPIRATION
“I don’t know about you, but when I start planning a party that is always the question for me. Sometimes I’m stumped and sometimes it just magically comes to me (or someone comes to me with a great idea). But it always starts somewhere: a color choice or a theme or a pattern or a cute saying.

With Dashell’s Race Car party, I knew that I wanted a party with a theme that could incorporate at least one activity that would be good fun for a bunch of two year olds. Two is a tough age. They’re a little young for games and they don’t really play together yet, but they definitely need things to do at party or they get restless (and mommies can’t get in all the visiting we “need” to do!)

My son, Dashell, is really into garbage trucks, trains and cars just like most 2 year old boys. So when I started to plan his birthday party, a few months ago, I started there. At first I thought trains but I came up with SO many ideas that I decided it might be better to have that party next year when he could actually participate a little more. As far as garbage trucks…well, truth be told,  I just couldn’t come up with too many activities that didn’t seem like they should involve orange jumpsuits and a state penitentiary bus or random pieces of recycling littered throughout my garden.

That left me with cars. Race cars seemed like a really fun theme. And when I thought about it, I immediately had an idea for an activity (provided my husband agreed to help construct it!) So, it was decided… race cars!

COLOR SCHEME
Now all I had to do is decide on a color scheme. It should have been obvious, I guess, in hindsight, but it wasn’t. I got stuck on the whole black checkered flag thing for a little while. But black seemed so “big boy” to me. After all my little guy was only turning two! He had plenty of time to go through his “black period”. (I think I hit mine in my early twenties.)

I definitely wanted a limited color palette but I still wanted it to say “race car”. So I thought about going blue and white or green and white or even green and yellow, but in the end I really thought about where I was going to stage the party… my backyard. You should know that I didn’t do my yard in a neutral palette (which maybe would have given me more fixability for staging events). Instead all my throw pillows and all my outdoor umbrellas are red. Bright red. So, red and white it was. Oh, and then I threw in a some yellow to give the color scheme a little zing. And there you have it. Where to start… at least for this party.

THE INVITATION
I designed some invitations to let everyone know right from the start what kind of party it was going to be. And on the day of the big event, I decided to line the driveway with huge 3 foot balloons to kick off the red and yellow color scheme from the get go and mixed in a some of the traditional black and white flags as well. Dashell had a blast running around with a giant balloon on his wrist! In fact, there is so much helium in those things that it kept pulling his arm up into the air!

DESSERT TABLE, FAVORS & ACTIVITIES
I designed a dessert and favor table that incorporated the theme and party colors. As I mentioned, I recruited my husband to build the “activity”… a race track! All the kids had a blast. And I purchased a blow-up race car and filled it with 120 tiny pillows for the kids to flop in. We made sure that no one left empty handed. Each child was given some “Fastlane” bubbles, and a crayon caddie made by the wonderful Melissa at Beau Melange. Originally I’d shipped her the fabrics to match our party theme, but now she has almost the exact same one in her shop!!

It was a pretty wonderful day. And most importantly, Dash had a blast!!

TIPS & HINTS
I also wrote a post with Tips & Hints for throwing your own Race Car Party which includes things like how to hang a backdrop for your desert table, how to prop up your treat cones, and plans for building your own race track.}