GET 20% OFF YOUR ORDER with code: MAKEITFUN
Skip to content
July 4th / Patriotic, Sweets 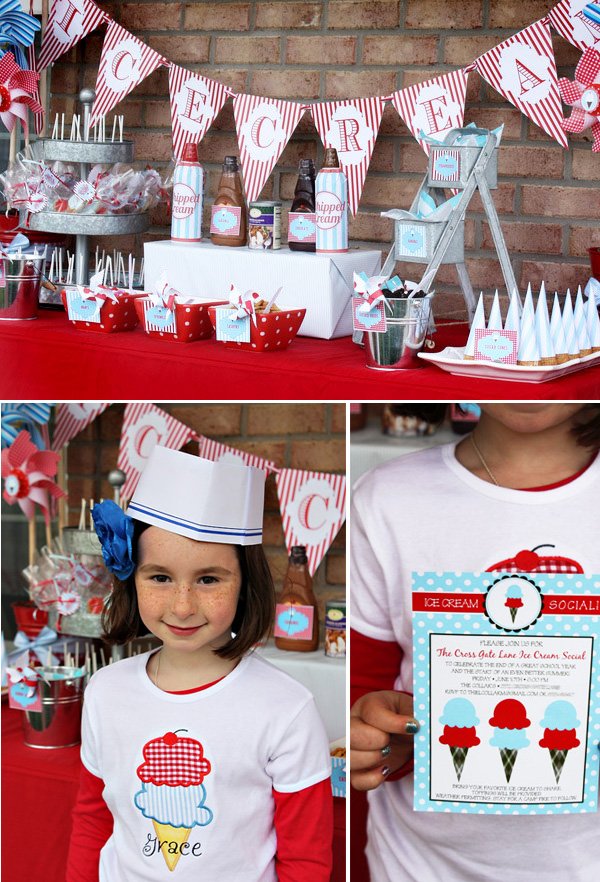 Ice Cream Socials are always a fabulous party theme for summer… ESPECIALLY when they look as adorable as this particular ice cream social block party by Melissa from Buckets of Grace!

The retro-modern vibe of this party makes it fun for all ages, and the red white and blue palette also makes it fabulous inspiration for 4th of July! From the soda-shoppe-like printables and “Make Your Own Rootbeer Float” station to the thoughtfully styled ice cream toppings, the kids’ shirts, and more, Melissa did such a great job thinking of all the little details! And also on the smart-thinking side of things, she used the exact same color palette as her son’s upcoming carnival party that was already in the works so that she could use a lot of the elements for both parties and not break the bank! 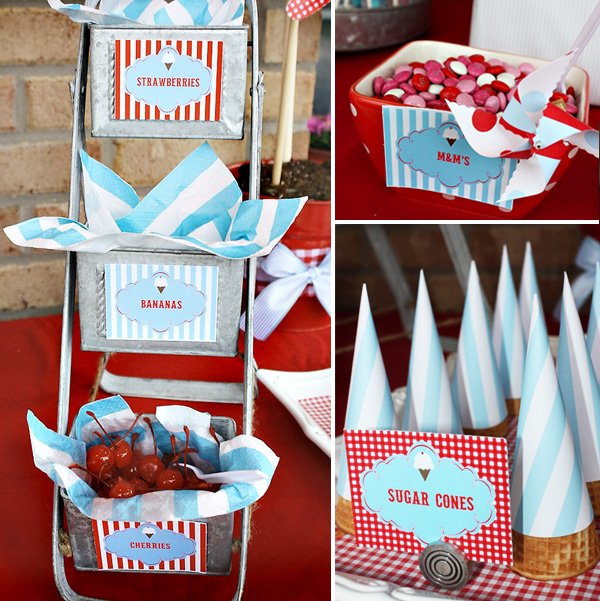 Read on for LOTS more yummy images + all the creative details… 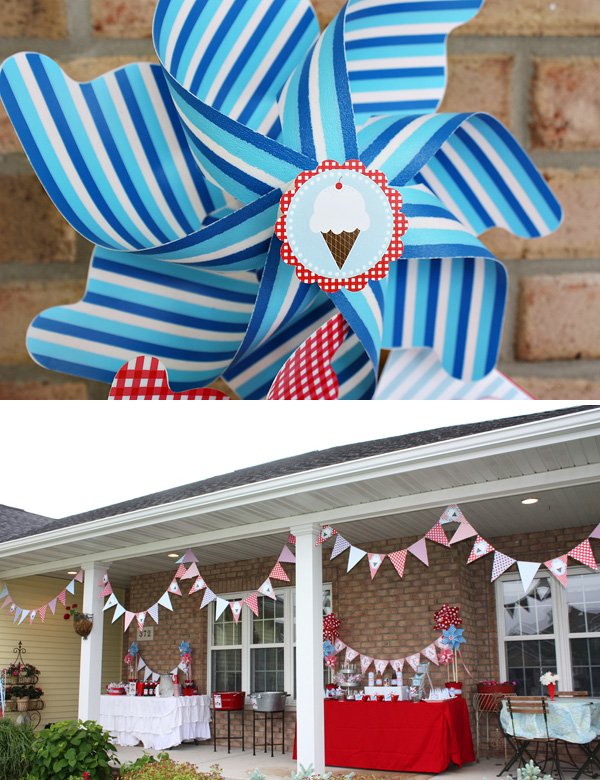 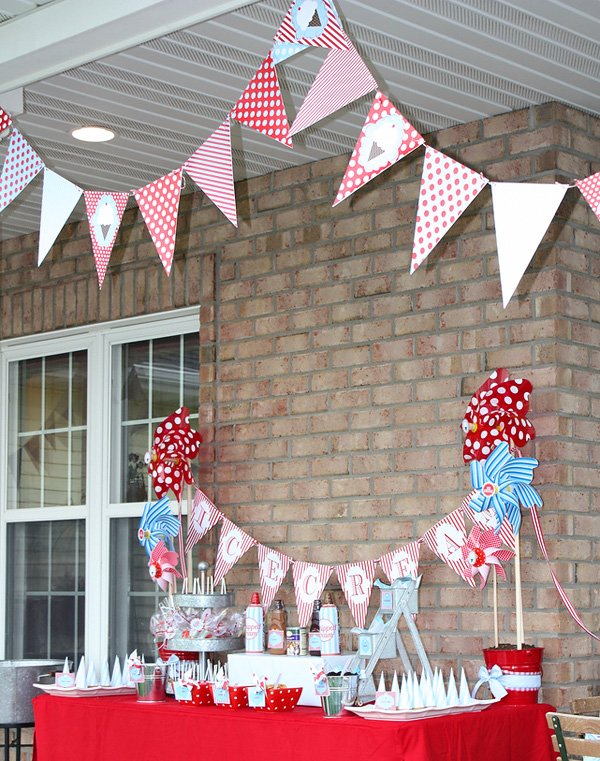 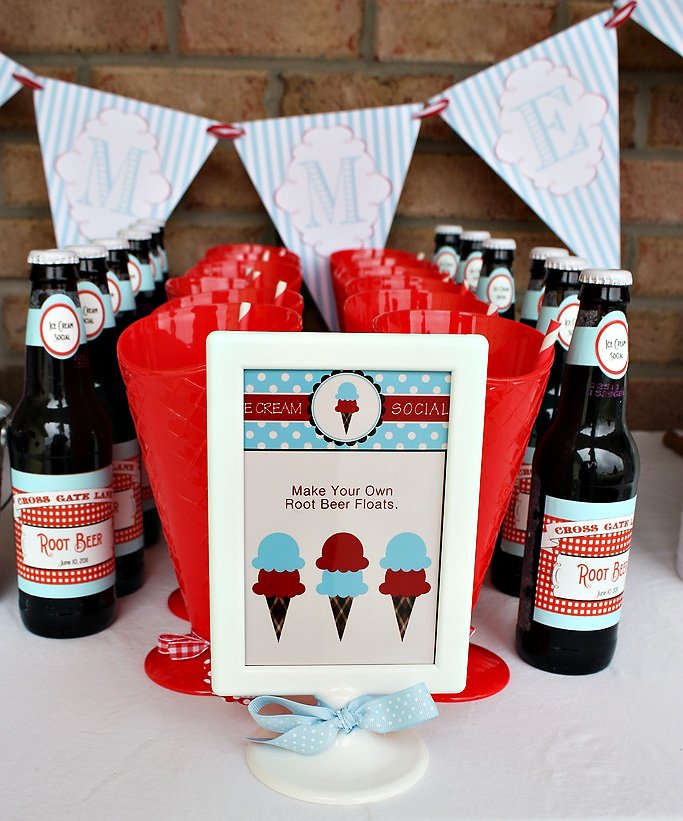 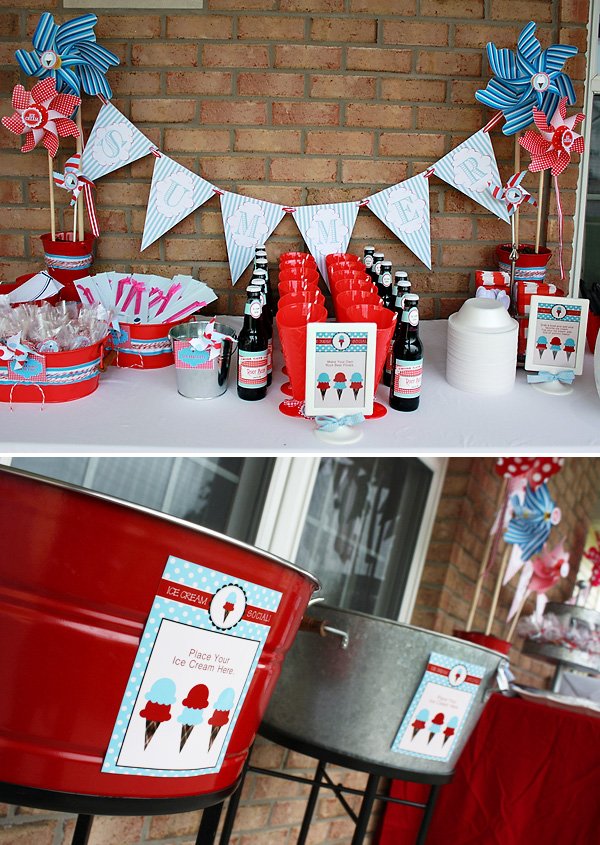 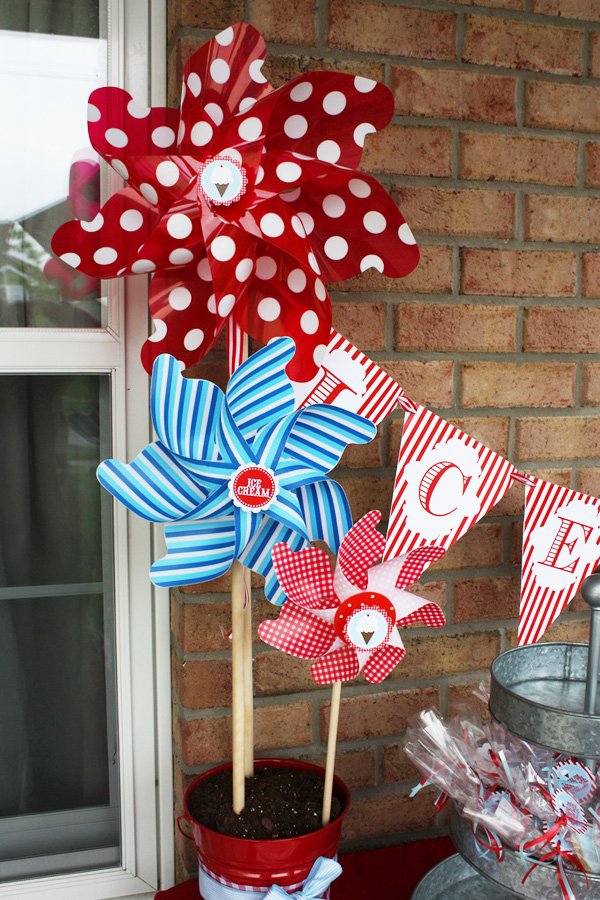 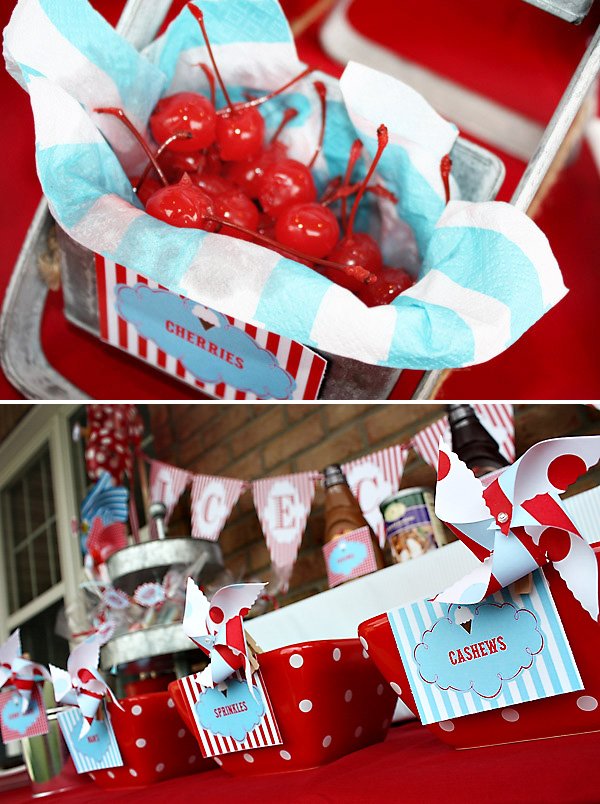 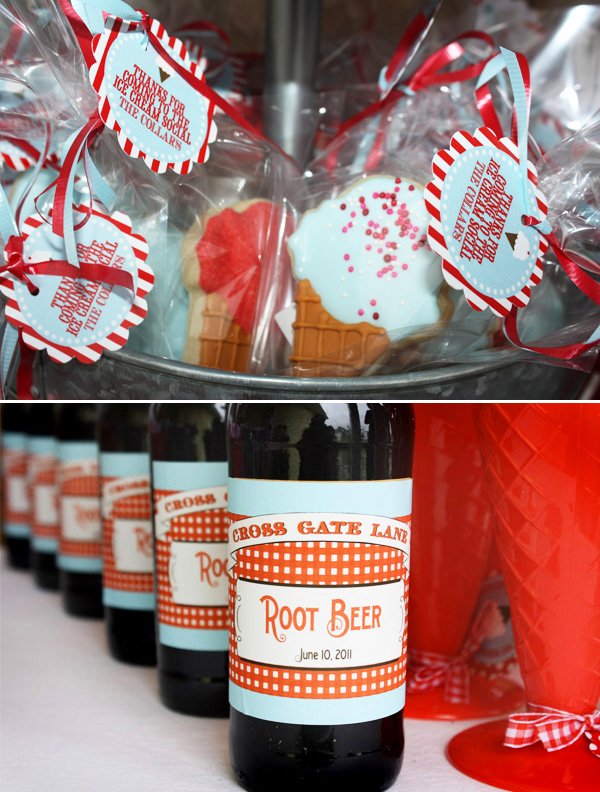 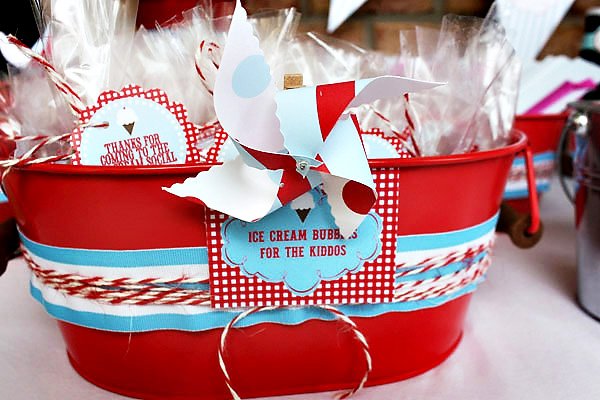 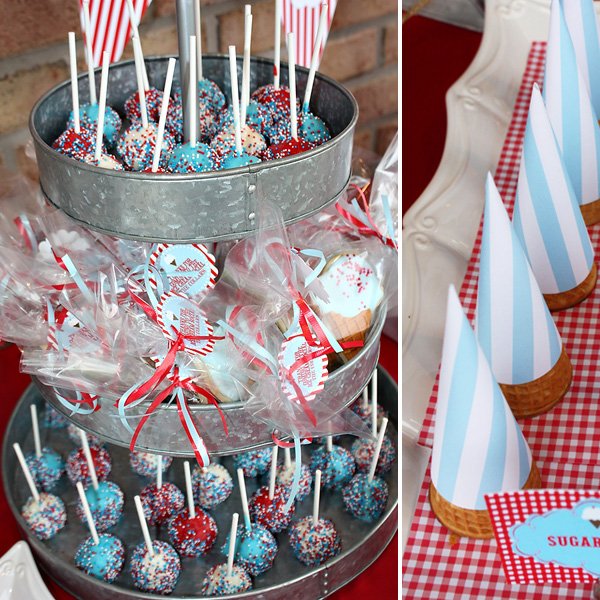 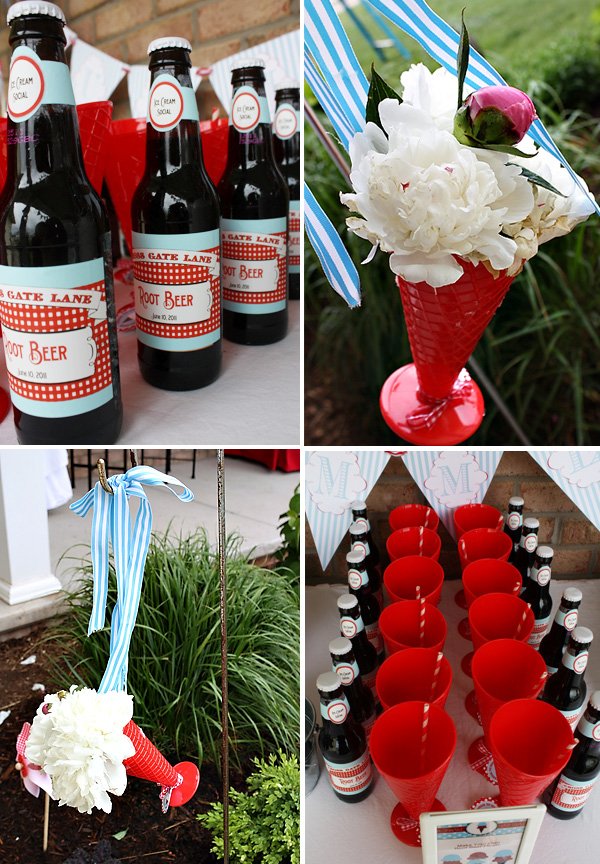 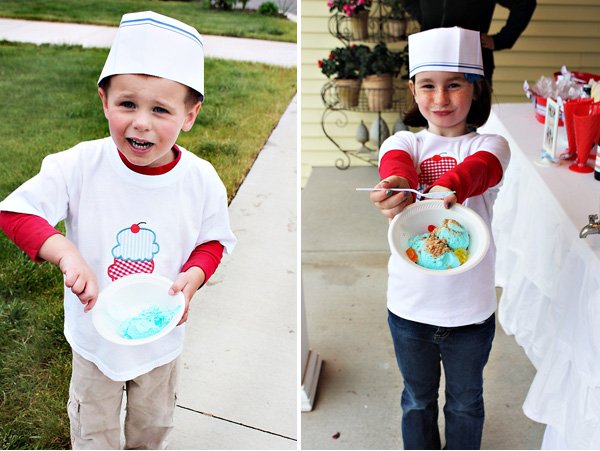 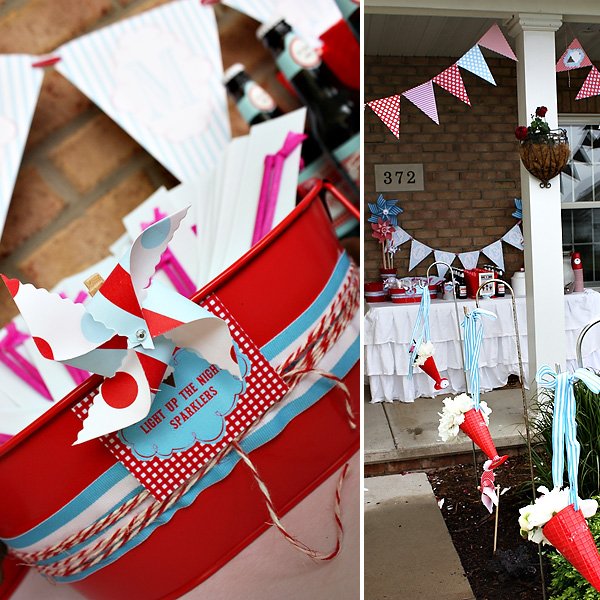 “My neighbor and I wanted to think of a fun way to celebrate the end of the school year as well as the start of summer.  What better way than with ice cream!  We thought it would be fun to kick off summer in the neighborhood by inviting our friends and neighbors to an ice cream social.  During the winter months, we don’t get to see our neighbors too often so we thought it would be a great opportunity to reconnect at the start of summer.  My kids and I had fun going up and down the street placing the adorable invitations from Anders Ruff in our neighbors’ mailboxes.  We provided the toppings and everyone was asked to bring their favorite ice cream flavor.  I had vanilla on standby for DIY Root Beer floats as well.

The inspiration for the party was really the color palette.  I did not want to break the bank on this get-together so I decided to go with the same color palette that I am using for my son’s upcoming carnival party – lots of the items will serve double duty!  I also think the light blue and red color scheme evinces summer fun and is a great combination for an ice cream party.  This party was really planned last minute so we did lots of DIY details.  I also wanted to have a hint of a nostalgic ice cream parlor.  As soon as I found Carli from Dimple Prints Ice Cream printables, I knew that was the look.  She graciously agreed to do a color change of the printables for me.  I think they set the tone for the entire party.  I also found the Root Beer bottle labels and labels for the Whip Cream from LoraLee Lewis.  Her products are just amazing!

Unfortunately, the weather was awful!  It had been in the 90’s all week and the day before the party, it turned unseasonably cool – even for Wisconsin.  Despite the temps in the 50’s, the kids were bound to have some summer fun.  The rain graciously held off and we were able to have a great party.  We had a camp fire going so people could eat their ice cream by the camp fire and not get too cold.  As it turned dark, we lit sparklers for the kids.  A perfect ending to a perfect neighborhood get-together!”