GET 20% OFF YOUR ORDER with code: MAKEITFUN
Skip to content
Styled by Jenn, Theme Parties 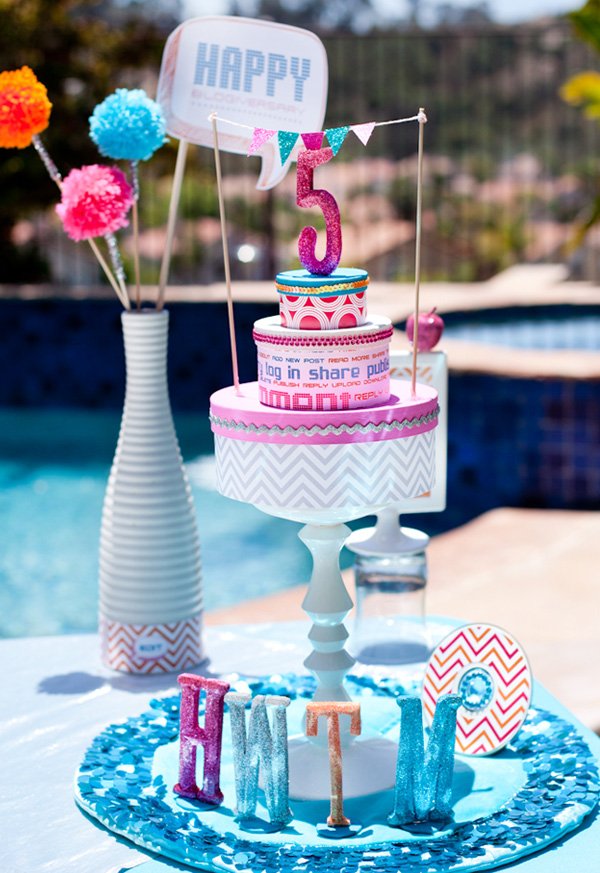 So… I should start off by saying that this post really should’ve been up back in June – on June 26, 2011 to be exact – but the fact that it’s up at all is kind of a mini miracle at this point (full story below). And, as it turns out, the more-than-2-months-late post date is actually kind of perfect…

…because now that it’s finally up & done, I’ve come to realize that this post – which so innocently started out as what was supposed to be a mini “virtual celebration” of the 5-year anniversary of this blog, has instead unwittingly become the perfect metaphor for my last 5 years of blogging: filled with shiny moments, not-so-shiny moments, full blown fall-on-your-face crashes, and multiple restarts… to use computer terminology. And despite the obstacles this project presented, I couldn’t help but laugh when I realized that…and might even venture to say there’s something I kind of love about it (hello there, silver lining).

Here’s the full story, plus a super inspiring video just because I think you’ll really love it too… 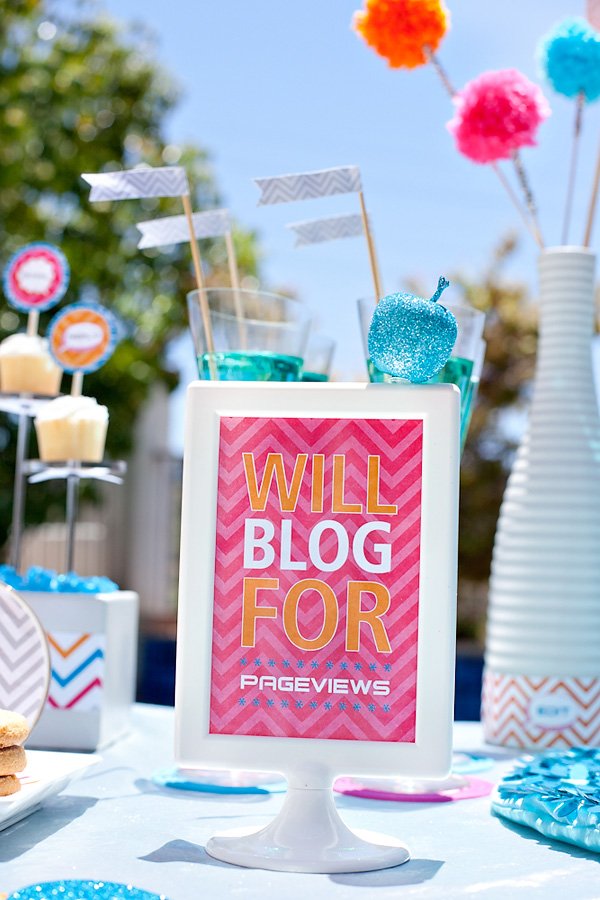 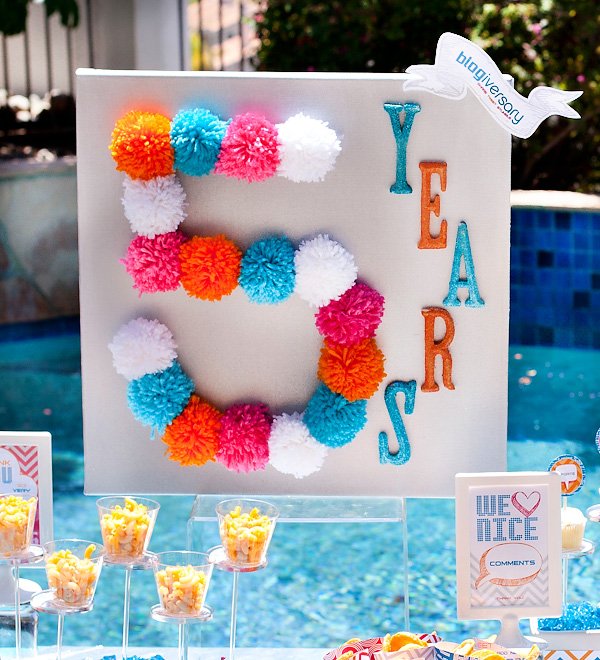 THE STORY:
As I mentioned before, this little photo shoot/project was originally supposed to be in celebration of the 5 year anniversary of this blog, which officially occurred on June 26th (hooray!). I’ve never really done anything to celebrate “blog birthdays” or “blog-iversaries” before, but 5 is such a nice round number that I thought it deserved some sort of little virtual “hurrah” this time, and what better place to host a virtual celebration than on the blog itself – where the people that keep me blogging every day also happen to be – right? Yes… my thoughts exactly. =)

So…using the “celebration” aspect & colors of the blog as my inspiration, I set out to design a “computer geek meets girlie glam” type of theme, which should only sound like a ridiculous theme to those that don’t read, follow, or author girlie lifestyle blogs themselves… or “woman-oriented” lifestyle blogs for a more sophisticated sounding description. 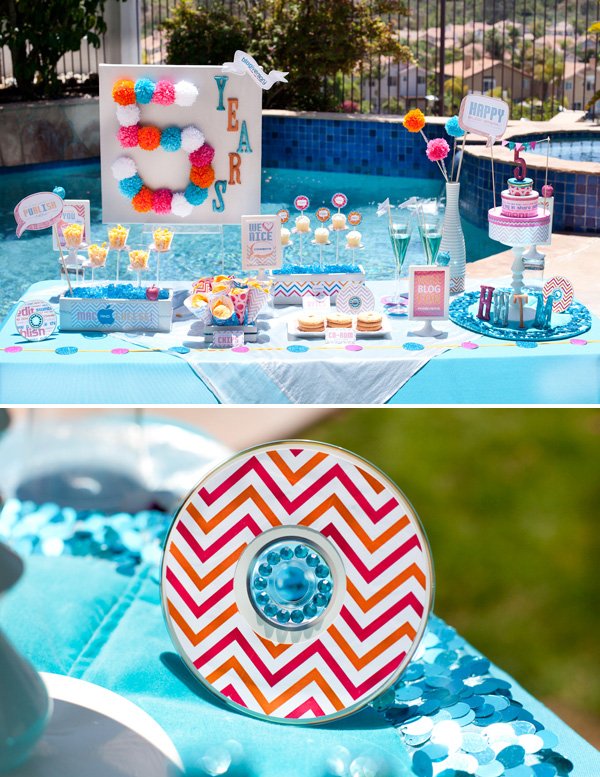 I made 2 signs to serve as the focal point of the table, but it was too hard to stagger them diagonally with 1) no wall to lean against outside and 2) the wind factor described below, so I settled for shooting them one at a time. 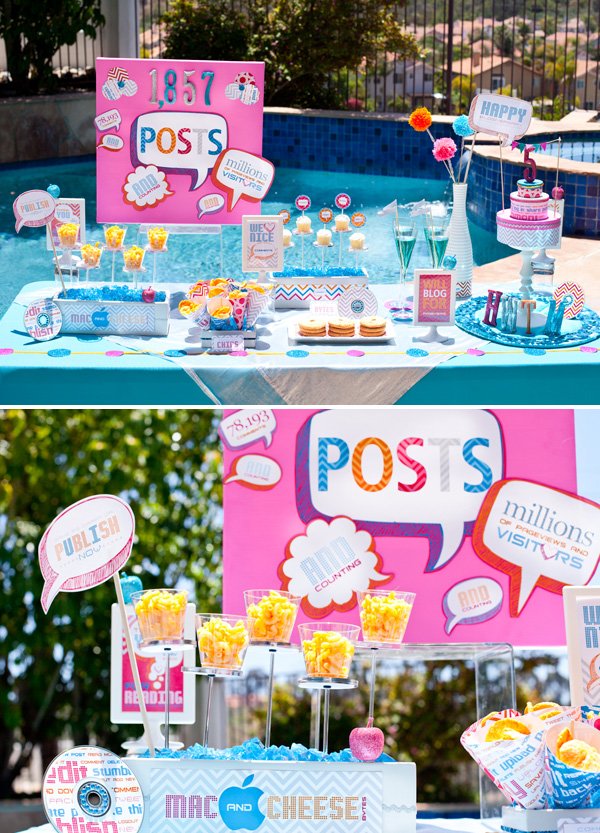 I also wanted this post/project to serve as an inspirational how-to for or for my fellow bloggers looking to celebrate their own blog-iversaries – OR for anyone that’s looking for computer related party inspiration in general (think robot parties, gaming parties, etc). So the plan was to do a mini shoot at home mocking up some of the party ideas, as well as offer free downloads of party printables for others to use in their own celebrations. (Happy Blog-iversary to YOU!) So…

I started by designing the printable patterns and party elements – decorative signs, napkin rings, cupcake toppers, labels, etc. At first I wasn’t sure if this theme was going to translate well to printables, but I was actually pretty happy with how they turned out! (Cue a SHINY moment!) I’d wanted them to look computer-ish (I really need some better adjectives to work with here) but also girlie and FUN, so a combo of bright colors, computer generated looking fonts, mod patterns, and sketched word and thought bubbles seemed to do the trick. Here are a few of them: 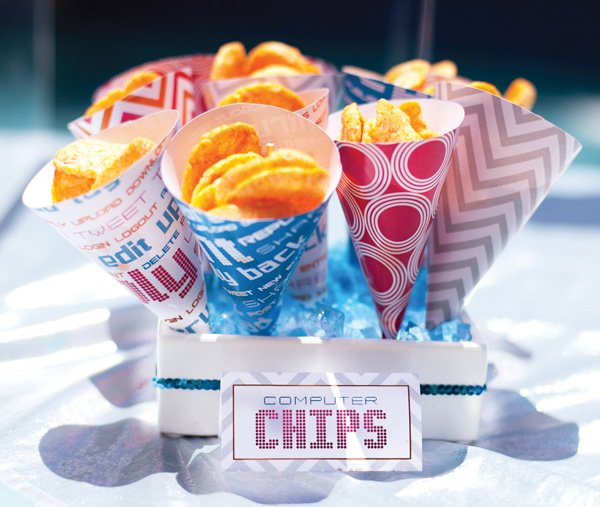 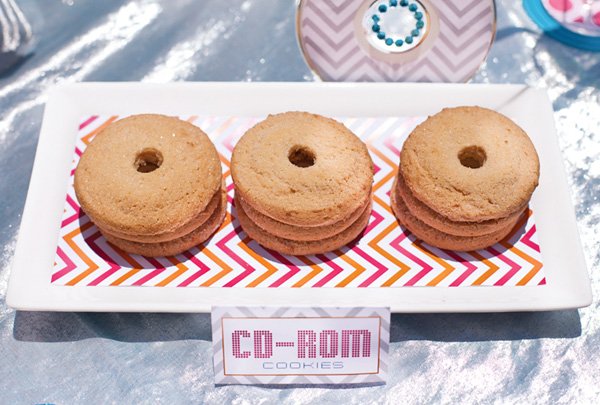 (In case you’re wondering I just used a really small circle cutter to punch centers from regular cookies to make them look like CD-Roms. Easy!) 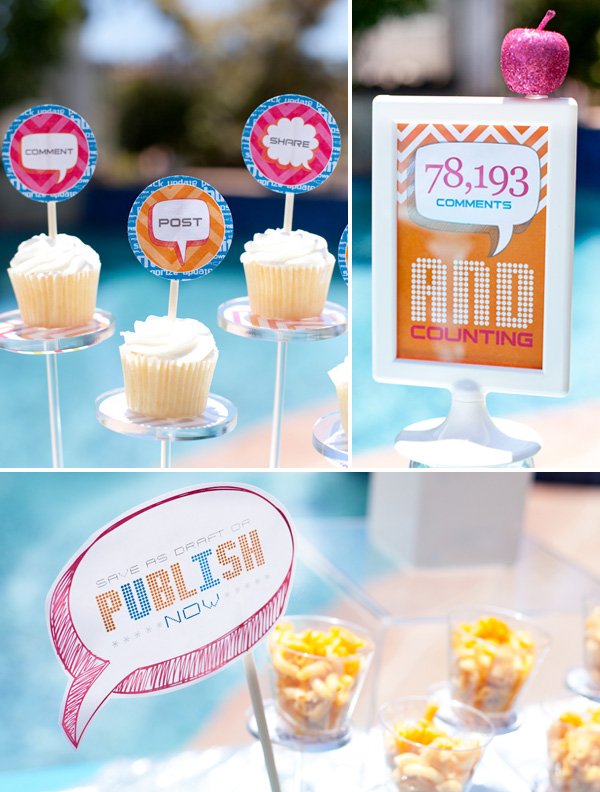 So now that the paper elements were done, printed, & cut, it should be easy to whip out a mini photo shoot and get this thing posted right? Wrong. This is where things started their downward spiral…(cue some not-so-shiny moments). I’ll fast forward through all the little “difficulties” that come with just trying to craft, paint, glitter, and glue with a toddler either attached to your leg or to your hip. Instead, let’s just breeze right through to “project: set this thing up”…

And speaking of breeze, that would’ve been nice because the proper term here would be “angry wind“. I’m a stickler for good photography and things photograph SO MUCH BETTER in the natural outdoor light, so i was bound and determined to shoot this in our backyard. 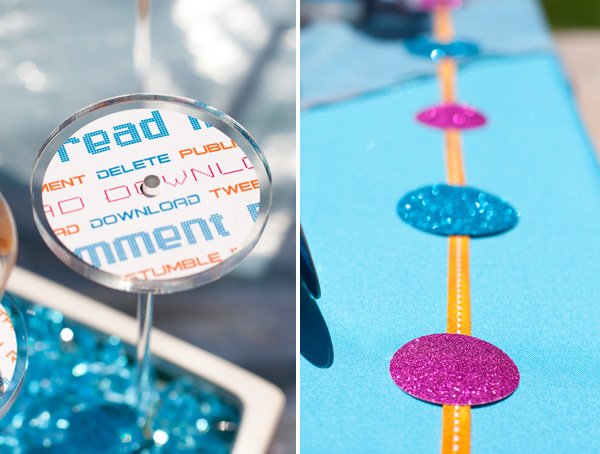 Things were nice and calm when I started, but unfortunately the wind was unusually present in our backyard all throughout that particular week and was also just as adamant about knocking every single thing over as I was about setting it up…. again, and again, and again…and yet again. Everything would be calm for a bit and I’d think we were home free – grab the camera! – then right at that moment a huge gust would come out of nowhere and send paper elements flying, blow the mac-n-cheese “bytes” into the pool, topple the signs …it was not a pretty picture (pun intended) and it looked absolutely nothing like this: 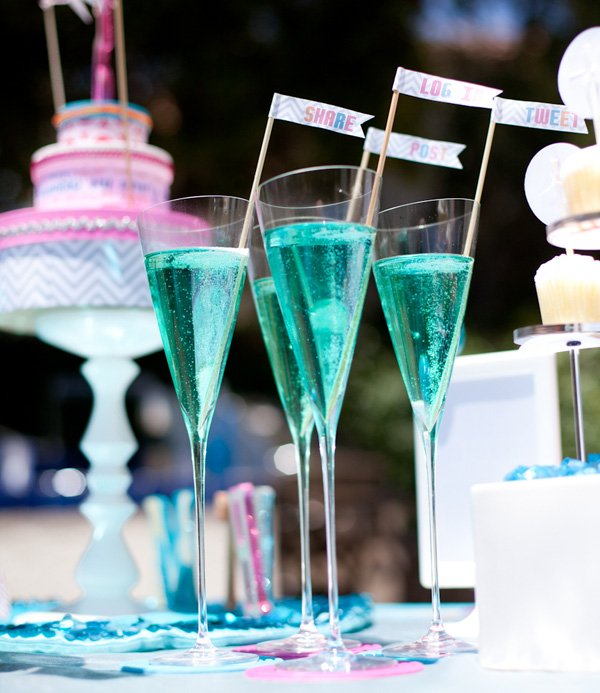 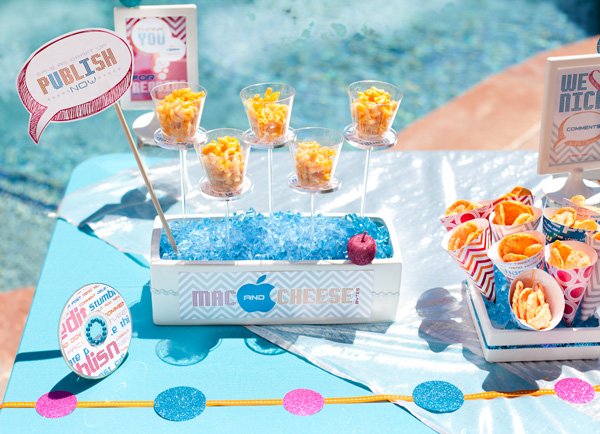 The first day ended up being impossible and I finally gave up by sundown, especially after tiring not just of the wind, but also of listening to my husband/photographer ask why on earth I thought this was going to work at all. (Because I needed it to, that’s why?!).

The next day seemed a little better wind-wise so I got everything set up again, and just when it was all “perfect”, Mother Nature strikes again! Broken glasses, mac-n-cheese on the cement this time, ripped signs, cupcake frosting all over the place… at least the dogs were happy to help clean up this time. Since our fence isn’t exactly sound proof, I’m sure the neighbors were quite aware of how frustrated I was too…oops! :0

Anyways, just as I was about to give up again on day #2 and throw the rest of the props in the pool myself, DH thankfully decided to be more of a cheerleader this time, and we somehow figured it out – more at the turtle’s pace than the hare’s – but we crossed the finish line nonetheless. Sometimes this meant me holding things in place and literally diving out of the shot the minute the wind died down so he could snap a picture – and sometimes it meant fixing the same thing a zillion times until we actually got a picture of it right side up instead of sideways – but one way or another we actually got it done. Here are some more right-side-up pictures: 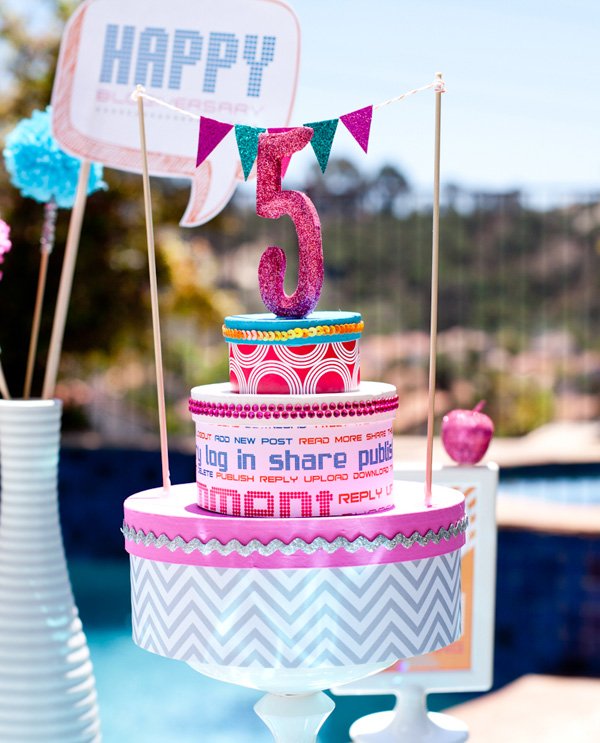 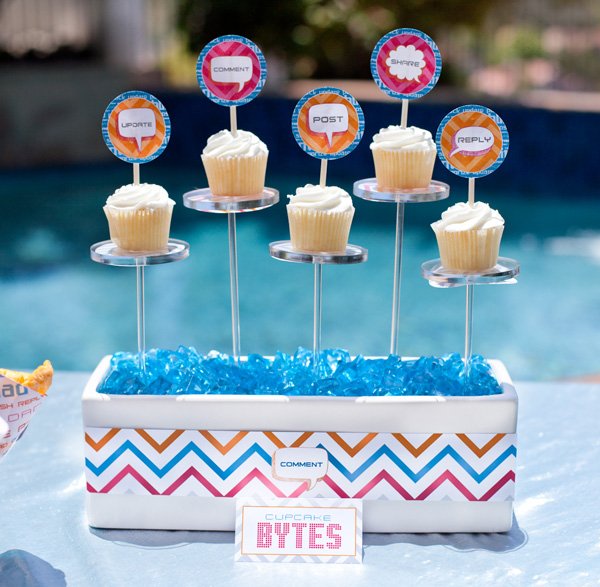 (Like these cute little food stands? They’re called Pastry Pedestals and you can find them right here!) 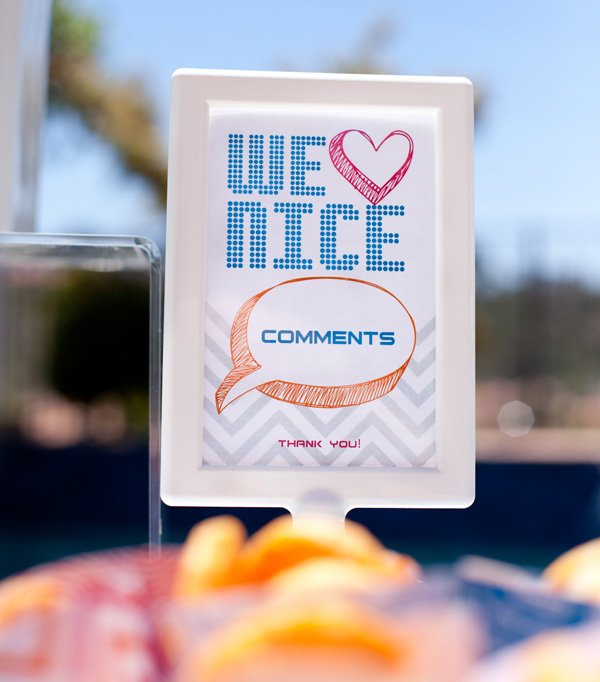 And now onto the full-blown crash/spinning-rainbow-wheel-of-death moment of this project (to use a term my fellow mac users can appreciate)…you know those party printables I designed & ended up being so happy with, which I also planned to offer as free downloads to blog readers? Well… I lost them. Or maybe more accurately – my computer ate them. And of course this is BEFORE I was able to share them. *tear* Cue ironic picture below… 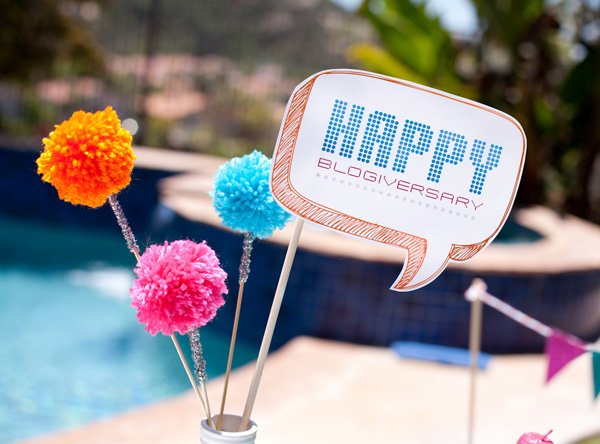 I’m talking every inch of the printables too – not just the downloadable PDF versions, but the original layered photoshop files – which accounts for HOURS of design work – ugh!!! I’m honestly still not quite sure how it happened, but I must’ve somehow either overwritten or permanently deleted that folder along with a couple other recent design projects – bringing the casualties up to at least 20 hours of design work. I’ve seriously never, ever done that before in 12 years of graphic design. Seriously… what was the deal with this project?

After digesting this latest blow and mourning those lost hours/projects for a little while though, I saw this video and decided to get up, dust myself off, and finish this thing once and for all. I’d still like to recreate these printables at some point (ideally in multiple colorways), but for now I’ll have to settle for at least posting the party inspiration and lessons learned. You could still recreate most of these ideas with your favorite papers too – and of course the food ideas, covered CD Roms, stacked paper mache box “cake”, yarn pom signs, etc could be used for all sorts of themes… 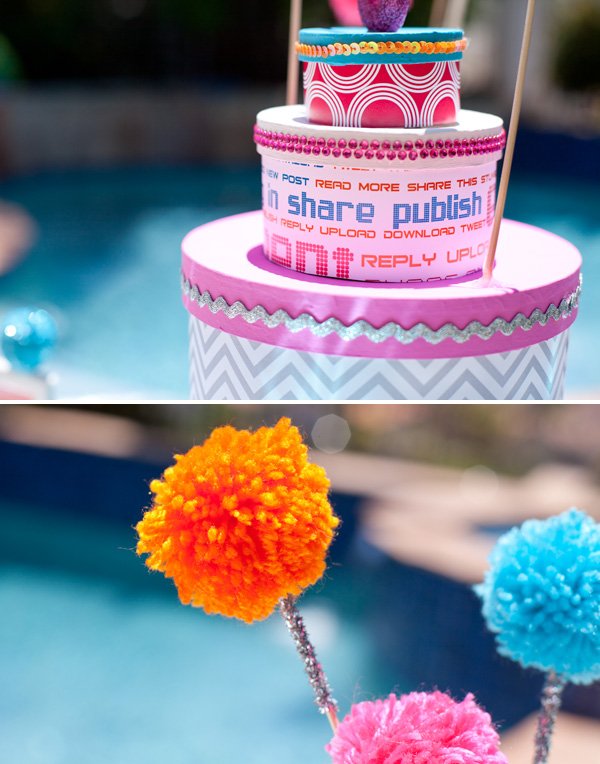 So although this project was a pain in the you-know-what, the important lesson here is that it eventually got done. And while it’s actually a very light hearted metaphor in the scheme of things – when compared to some of the really big issues and lessons we’ve faced/survived these last 5 years at least (maybe there’s another post on that later) – I still can’t help but enjoy a sense of satisfaction in looking at this finished post now, even if it isn’t exactly what I’d originally planned for it to be.

If you’re a blogger, entrepreneur, or really any warm-blooded human being, I’m sure you’ve experienced this sort of lesson one way or another yourself, which is why I leave you again with the video mentioned above. I might not be able to offer you free printables today, so this is my substitute gift… if you’re ever feeling especially down or like you’ve fallen flat on your face with work or any sort of issue in life, take a couple minutes to watch this video. Chances are good it will help reignite your fire, whatever it may be… 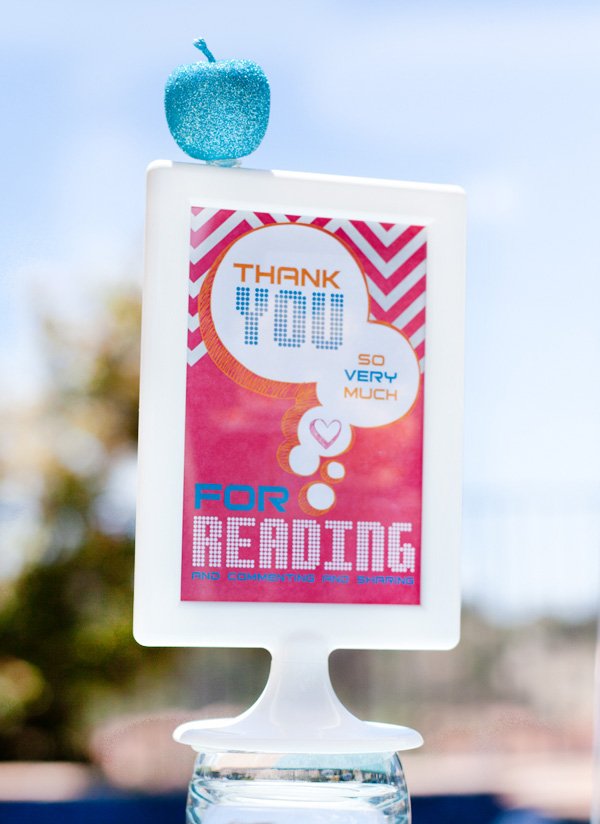