We are LOVING this fun spin on the car/racing inspired birthday party – a MINI COOPER theme! Kristen‘s son specifically requested this theme and she decided to incorporate a British Invasion vibe “to give it a little edge” – SO FUN!

Scroll down for lots more images of this super cool birthday bash plus all the creative details, including a ridiculously cool British flag/Mini Cooper Cake,  a toy car “table runner”, popcorn funnels made out of silver bubble wrap (very clever!), “spare tire” cookies, and more… 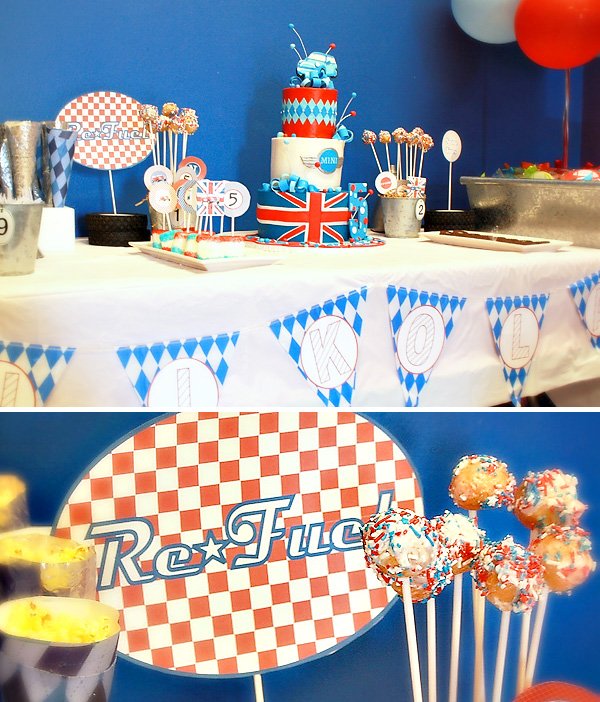 PARTY DETAILS, as told by Kristen…

“My son is a HUGE car fanatic and can name every car on the road at 4 years old. For his fifth birthday he specifically wanted a Mini Cooper themed party. I decided to incorporate the British Invasion theme into it to give it a little edge. The colors were Royal Blue, Powder Blue and Red. I made all of the decorations and had fun playing with the graphics, trying to keep the theme strong.

I took tires from Lowe’s and used them to prop signs on the dessert table reading ‘Re-Fuel’ and ‘Spare Tires.’ The spare tires were chocolate cookies that I painted with edible silver to give them little hubcaps. Giant marshmallows were dipped in red and blue sanding sugar and topped with a cupcake topper. Popcorn funnels were made out of scrapbook paper and silver bubble wrap envelopes filled with popcorn.

Munchkin donut holes covered in red and blue sprinkles from Dunkin Donuts became cake pops when I inserted them on lollipop sticks in little galvanized buckets.

One of my favorite parts of the party, was the kids table, where I printed a road as a table runner and used black and white checkered duct tape to secure it to the tablecloth. I lined the road with diecast Mini Cooper model cars for the kids to play with.

Each child got to take home a car cookie with a number ‘5’ on it as a favor.”