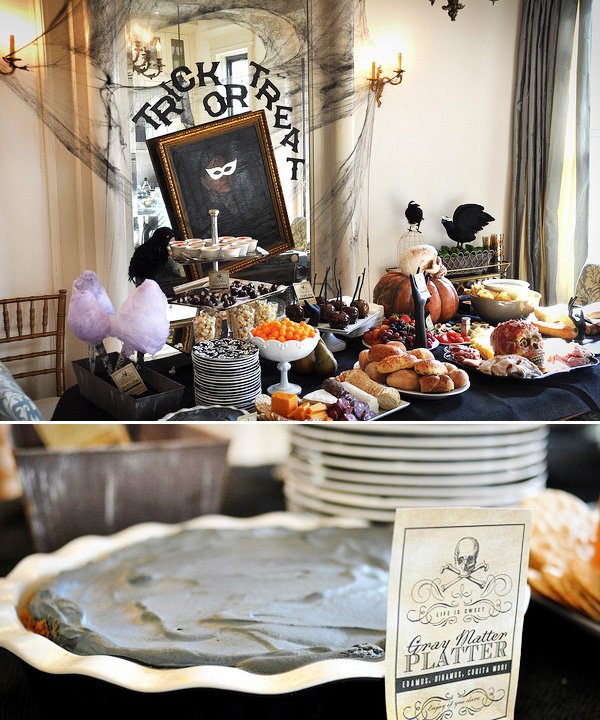 In continuation of the cool “Carnevil” Halloween Party by Brooklyn Limestone, here we go with Part 2… the CREEPY FOOD & DRINKS!

And trust me, there are some REALLY creepy {and oh-so-creative!} dishes on display here… like a seriously disturbing dip featuring all too realistic-looking charred, bloodied fingers reaching out “from below”. {That picture is farther down the post – consider yourself warned!} I’m also equal parts grossed out and amused by the genius “Off with his Head” Cold Cuts, which are cleverly displayed on a skeleton head, complete with pimento olive eyeballs of course! 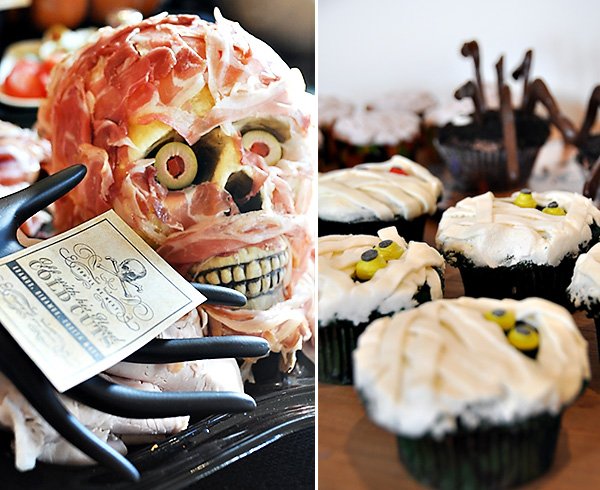 More creative edible ideas include things like a “Gray Matter Platter“, wicked-looking “Secret Ingredient Apples“, and “Black and Blue Brew“, in addition to some Mummy Cupcakes & chocolate covered Mice Cherries, both of which are a lot heavier on the cute than the creep. ;) Read on for the full Halloween feast… 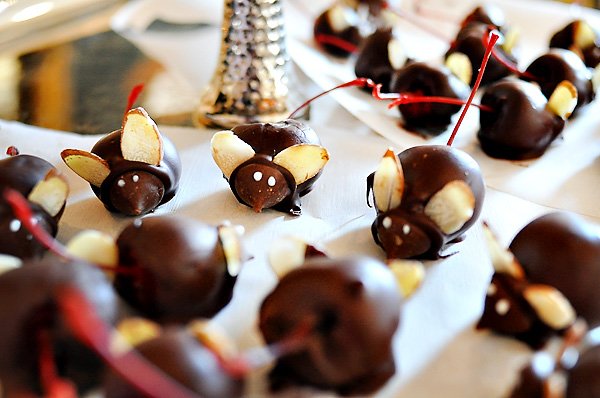 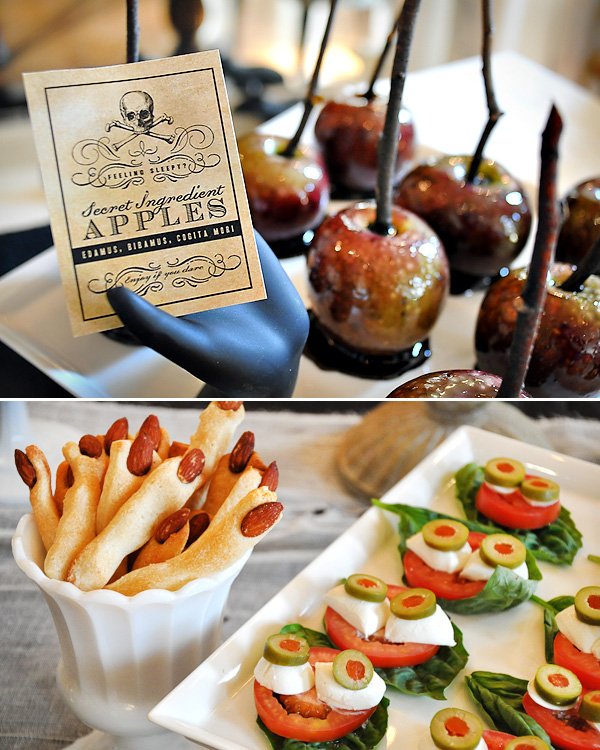 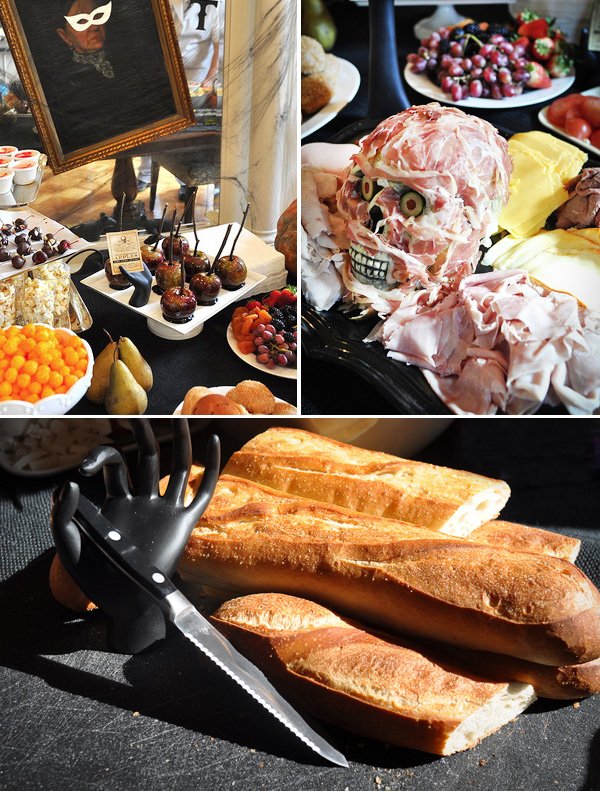 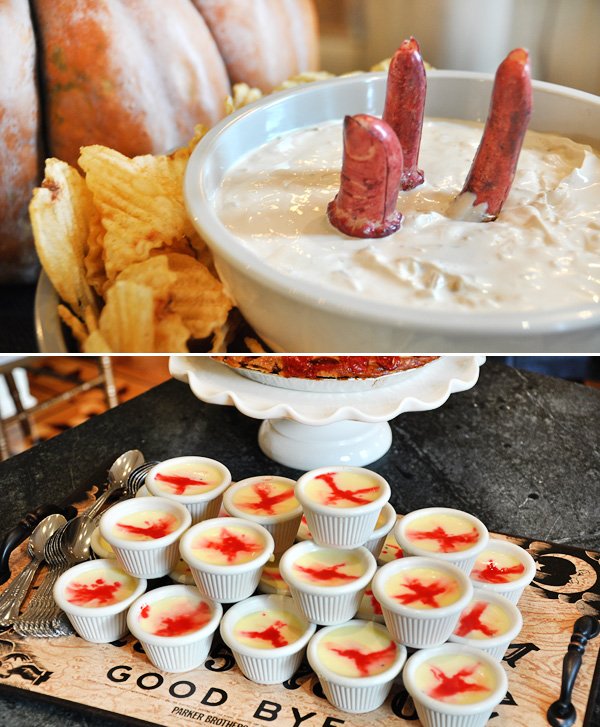 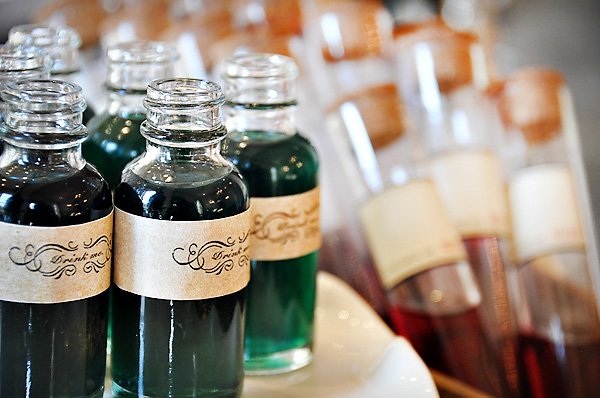 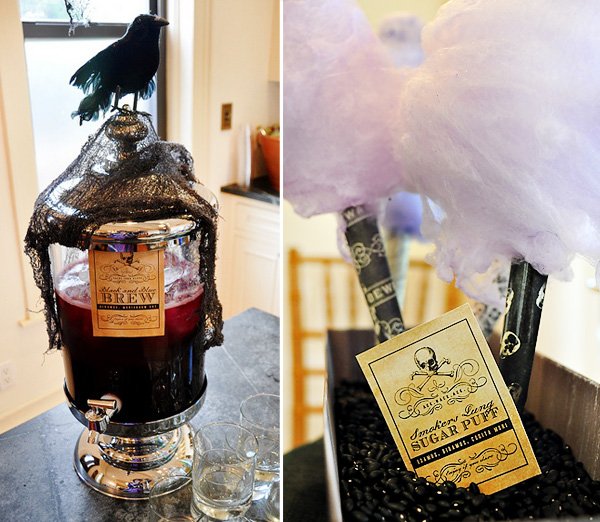 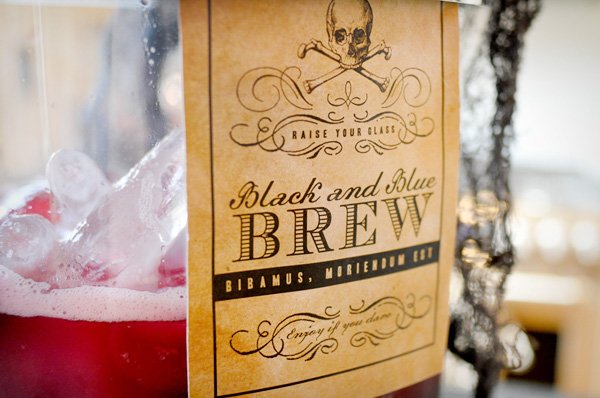 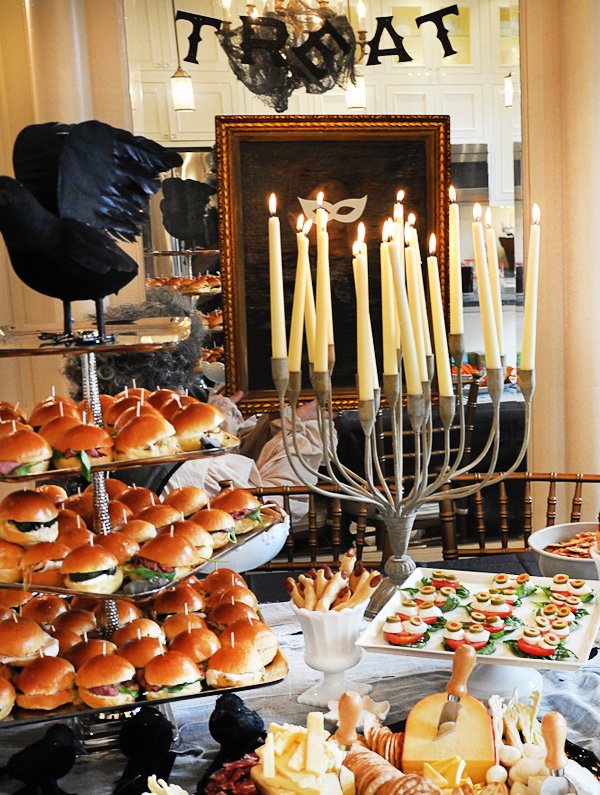 “CARNEVIL” DETAILS, as told by Stefanie… {same details as Part 1}

“Every year I like to have a little backstory that inspires the look. (i.e. spider infestation, dead bodies trying to crawl into the house, etc.). This party was a Haunted Victorian Side Show/Circus. The concept of ‘Carnevil’ was suggested by my brothers girlfriend.

Invitation
I don’t think this one quite tops the previous year’s “Creature Survival Kit” invite, but I don’t know if I’ll ever top that one! That said, I’m loving how this version turned out too. It’s a little more twisted than the previous year, but works well with the “turn of the century sideshow look” I was going for.

The little ‘specimen’ jar has a two sided tag attached. One side introduces the “twins” and the other side reads:

‘Come one, come all,
for only one night.
You’ll marvel and gasp
at our shocking sights.
Oddities of nature,
all on display.
Come see for yourself
on Halloween day.’

Some fun facts about this years decor:
I made all of the signage (with a lot of inspiration and imagery pieced together from what I could find on the web). I didn’t want to shell out for printing large posters so I printed everything on letter sized paper and glued it together on sheets of plywood. The clothing for the ‘ticket seller’ came from a thrift store in Staten Island. The fabric ‘banner’ that is hanging from the top floor is painted drop clothes. My brother wrote the news article that is hanging on the fence.

As in years past, we had a ton of trick or treaters. We gave out 1000 pieces of candy! This particular celebration was even crazier with the addition of a cotton candy machine. Somehow I thought that most parents wouldn’t let their kids have any because it wasn’t prepackaged – and figured it would be mostly for the party guests and the people on the block that know us. WRONG! At one point we had a huge line with kids and parents all waiting for a little sweet fluff. Crazy. Thankfully we had the bearded lady and the strong man to help the production line and a few other guests doing crowd control. :)