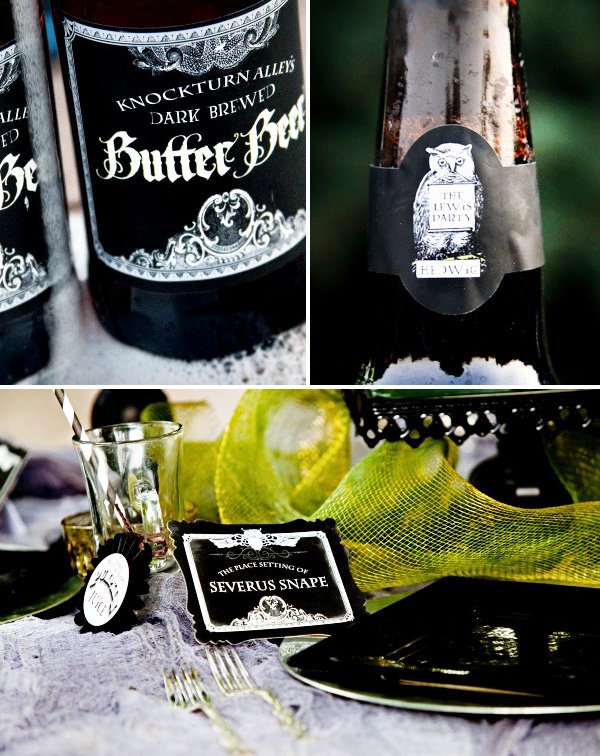 If you’re a fan of the Harry Potter series, prepare to flip over this absolutely fabulous DEATHLY HALLOWS Dinner Party dreamed up by the talented Loralee Lewis!

From the elegant drippy-wax candlelight and traditional English meal to beautiful vintage-gothic-style paper details and a delightfully dark “forbidden forest” setting, this is definitely a more mature take on the popular child wizard series… and a spectacular one at that! Loralee didn’t miss a thing when it came to bringing the details of the story to life either…guests enjoyed everything from Polyjuice Potion and Dark Brewed Butter Beer to Chocolate Frogs and Three Broomsticks Pumpkin Juice! This is SUCH a fun idea for an adult-friendly Halloween celebration too. 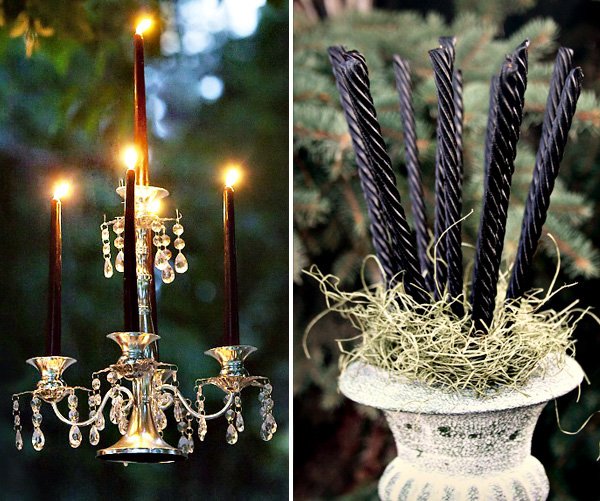 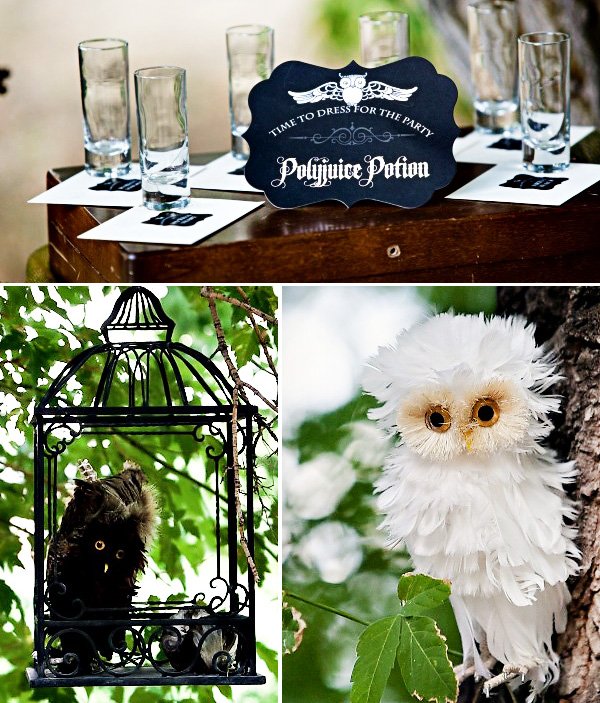 Read on for lots more dazzling images and all the magical creative details…. 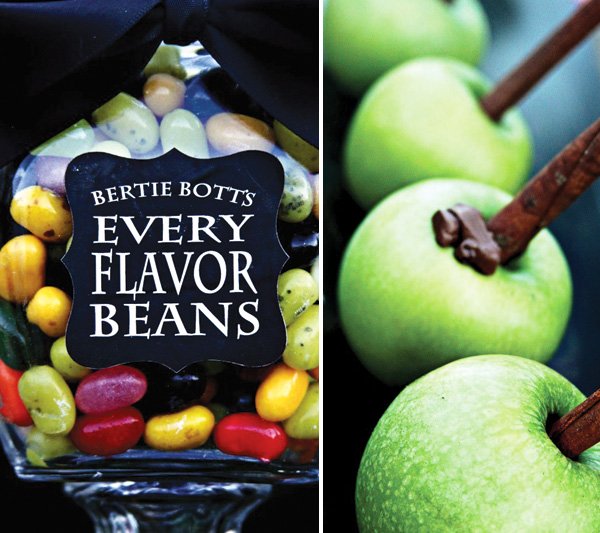 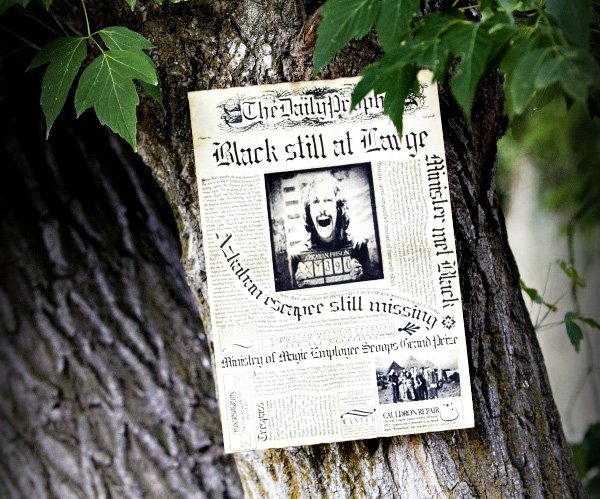 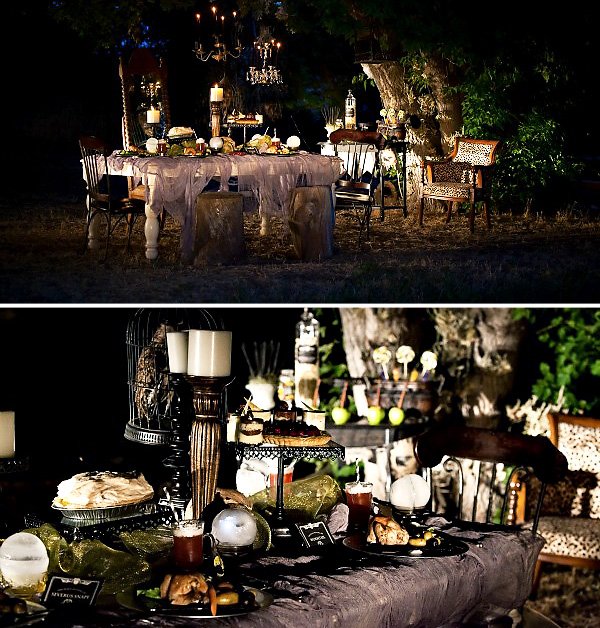 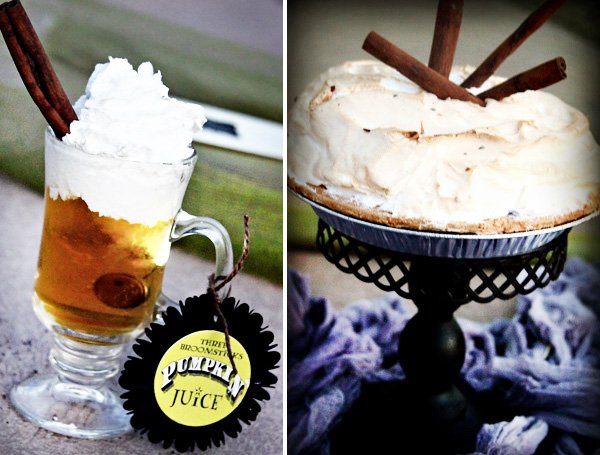 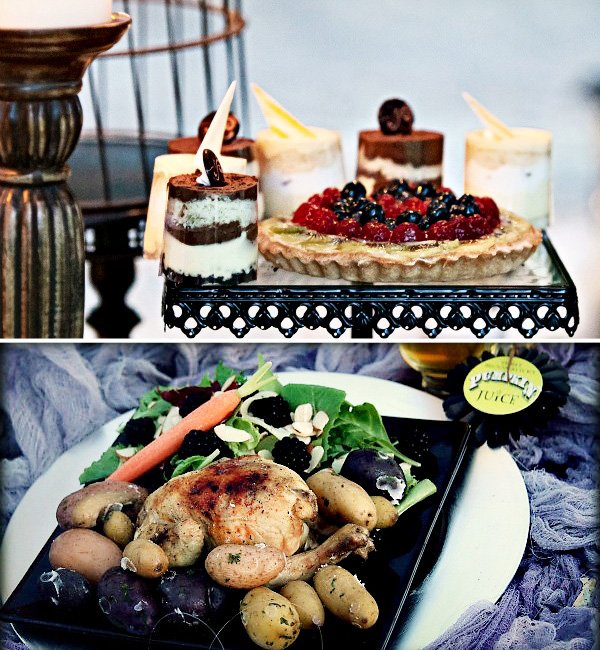 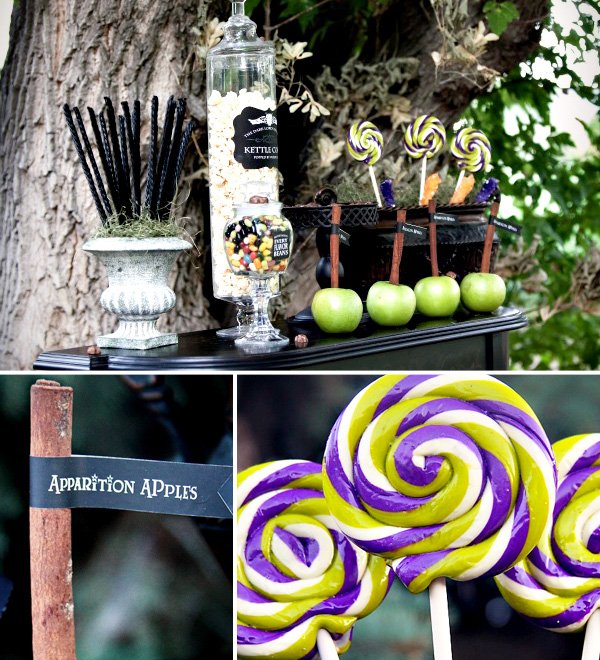 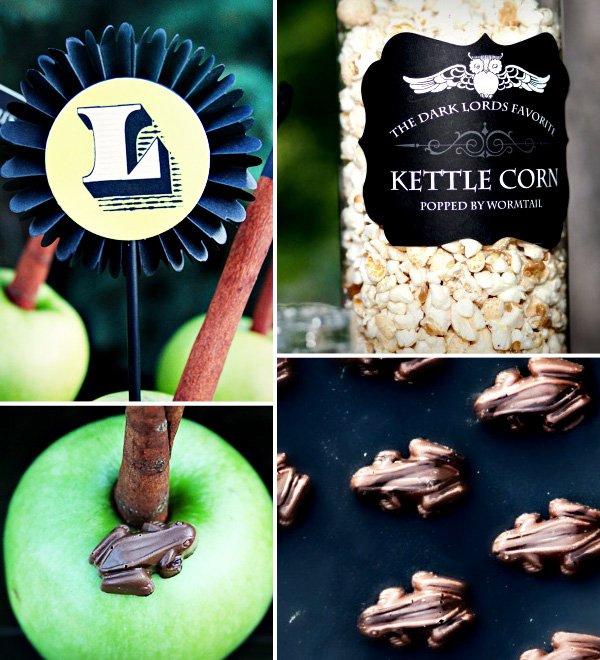 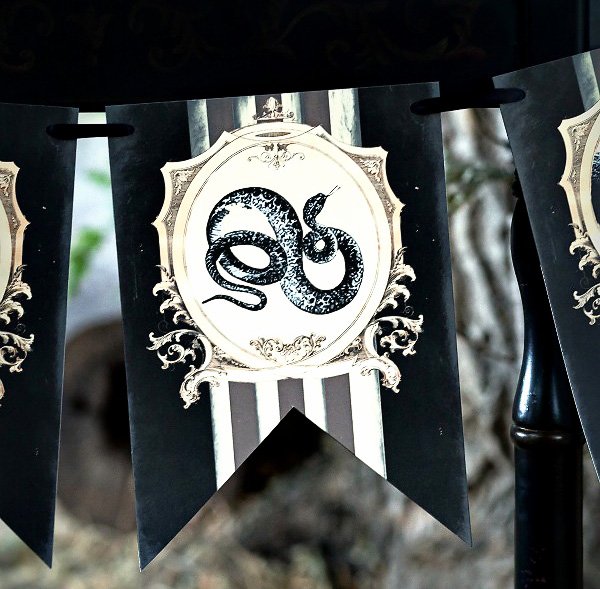 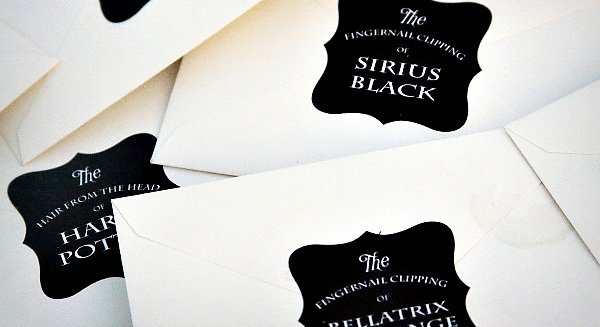 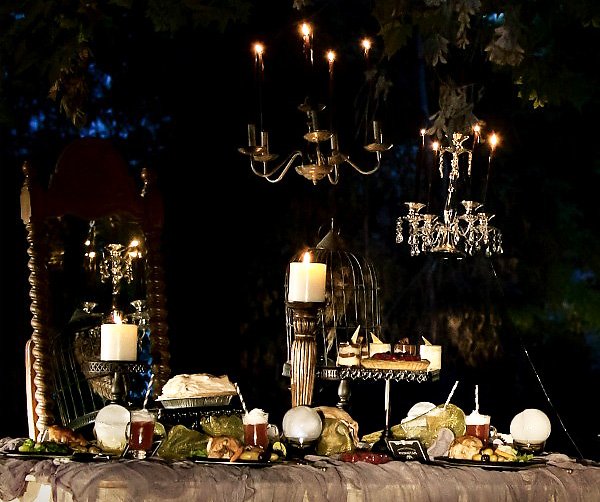 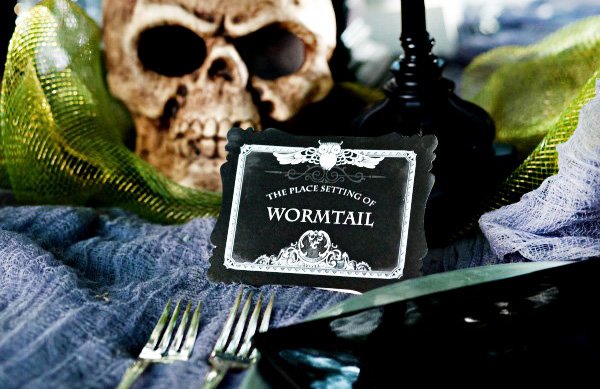 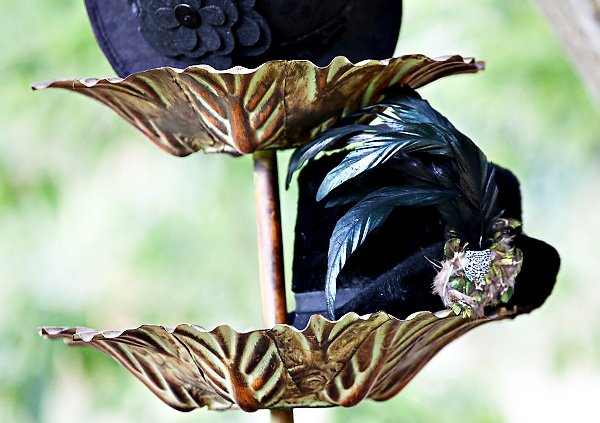 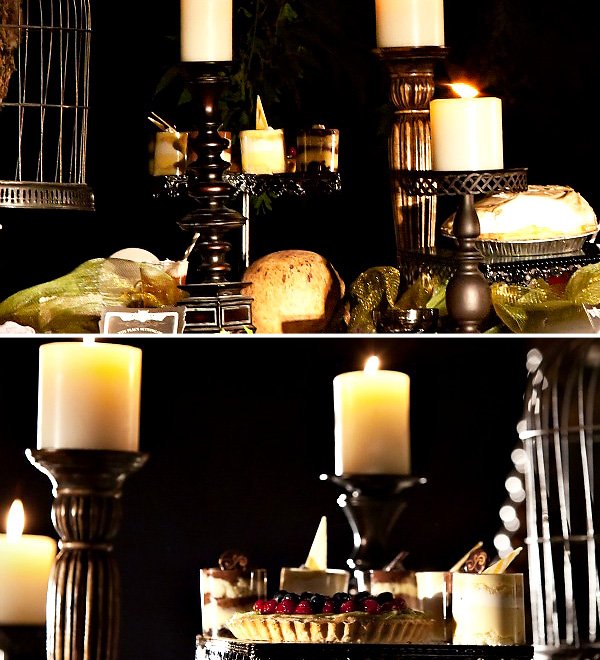 PARTY DETAILS, as told by Loralee…

::
“We love Harry Potter and had previously created a party for younger children based on the series, so we decided it would be fun to try more of a Halloween/Noire/Mature take on our favorite child wizard for the next get-together.  So in celebration of the finale and October, we created a Deathly Hallows Dinner Party.

The idea was to stage an outdoor dinner party with the look of a wizard gathering in a darker setting, the forbidden forest.  We tried to recreate as many details as we could, including glowing crystal ball “prophecies,” floating candelabras, virtually all light cast through real, lit wax candles (keep the fire extinguisher nearby), and appropriate food with details from the book. Here are some specifics:

1. I set out little glasses filled  with “Polyjuice Potion.”  Aside each small glass was an envelope labeled with a character specimen from the movie, such as “a hair from the head of Bellatrix Lestrange”.   The envelopes were really filled with a small amount of powdered drink mix.  As each guest arrived, the idea was that they would pick which character they wanted to be that night, drink the “Polyjuice Potion” and sit at the place setting created for that character.  I also set a large stand filled with black English hats for the ladies to wear.

2. If you look carefully in the dinner photos and you will see “Prophecy” orbs.  I created large round ice orbs and placed glowing LED lights inside them (powered by small batteries and covered in wax to prevent water from shorting them) in order for them to glow at night.  These were on each place setting and were each guest’s personal  ”prophecy.”  Seriously, they looked dynamite – wish I had a close up for you.

3. I hung a chandelier and two candelabras from the tree using fishing line to make them look like they were floating above the table.   These “floating” lights created a dramatic and fun addition to the event.  When we placed them in the trees and lit the candles, no douse of humility could have made me feel less than brilliant.  Watch out though, the candles can burn through the line if not positioned right and drop flames onto your table.  Hence, keeping a fire extinguisher nearby.

4. Owls were everywhere at the party.  I had them in the trees, in steel bird cages, and on the table.  I really don’t think you can have enough owls at a Harry Potter party.  They are currently on sale at Michael’s.  I may have already bought them all though.  You can also see a Renaissance Pennant banner around the candy table with an image from each of the four Hogwarts Houses (Lion, Snake, Raven, Badger)

5. I tried to stay true to an English meal.  The dinner included Cornish Hens, potatoes, a mixed green salad, carrot, and a variety of desserts.

6. I held the event in a dear friend’s field.  I thought this gave the event a Forbidden Forest feel that was a meeting place in the last movie.

7. I had a jar filled with “wands” on “loan from Ollivander’s Wand Shop.” (not photographed)

9. I placed lots of sealed envelopes all around to echo the first book when Harry received his exorbitant amount of letters from Hogwarts.