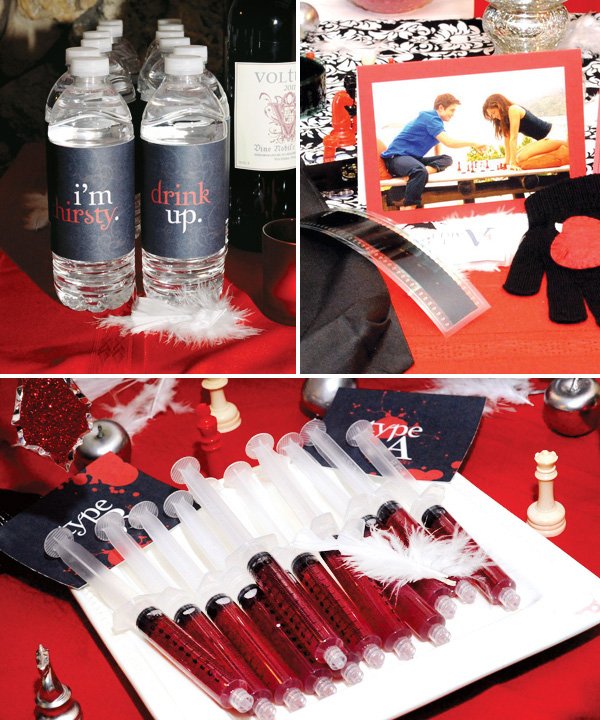 Premiere parties are so fun to create, especially when they’re for a mega-popular series like the Twilight Saga. The night before Breaking Dawn Part 1 released, Erin from Bringing Up Burns hosted this amazing and super-creative Pre-Premiere Twilight Party for 30 of her girlfriends! If you’re in search of ideas for your own Twilight celebration – maybe a pre-party for Breaking Dawn Part 2 this November? – Erin’s party is filled with with tons of glitzy, vampire-inspired inspiration for food, games, party favors, and more… (P.S. I spy free Twilight printables from HWTM too!) 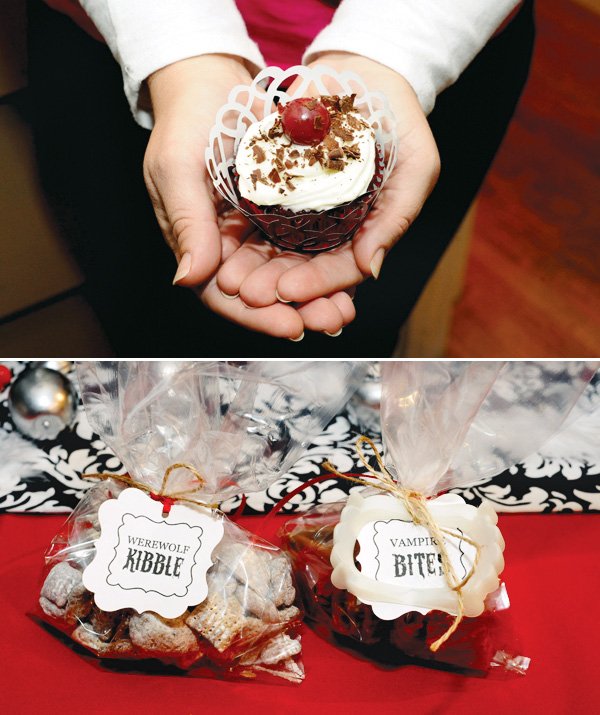 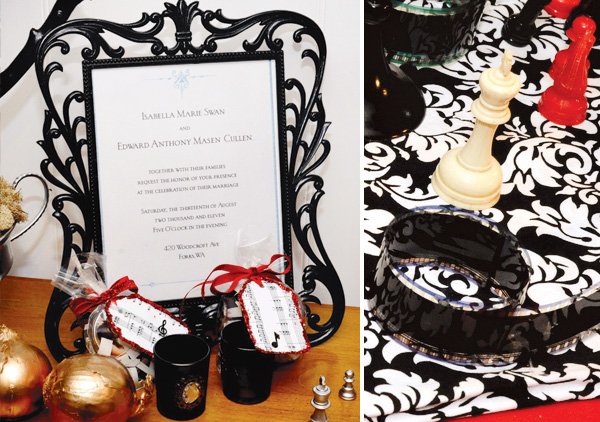 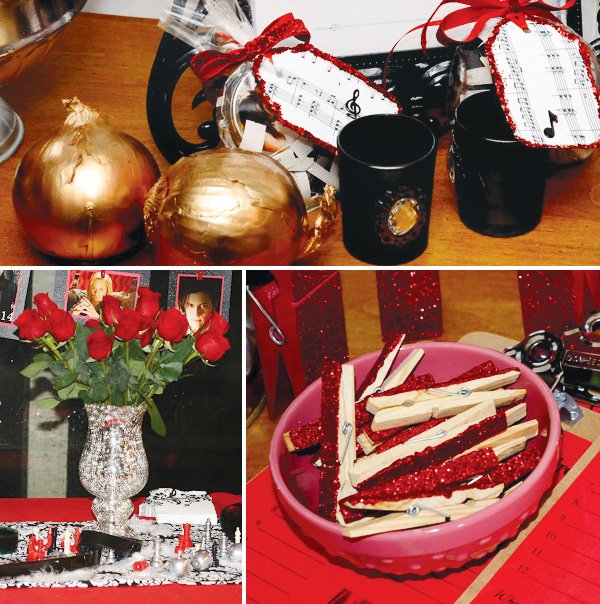 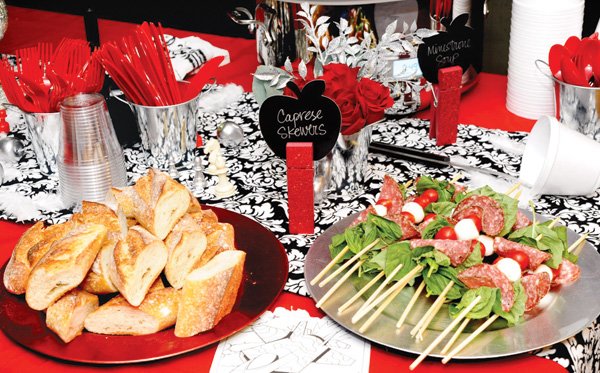 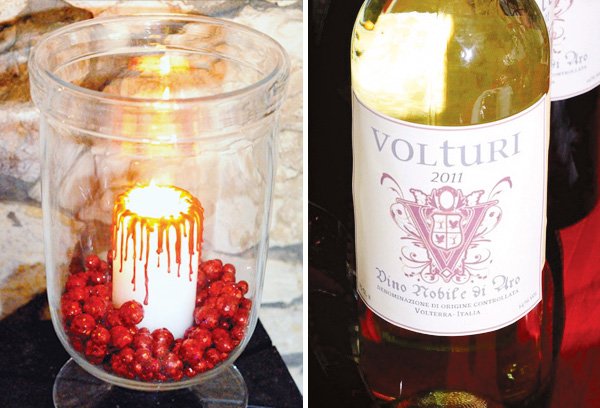 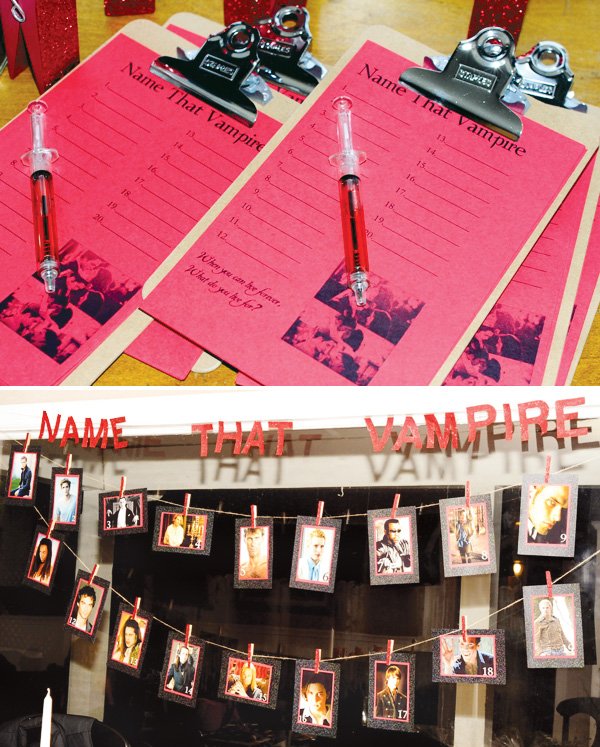 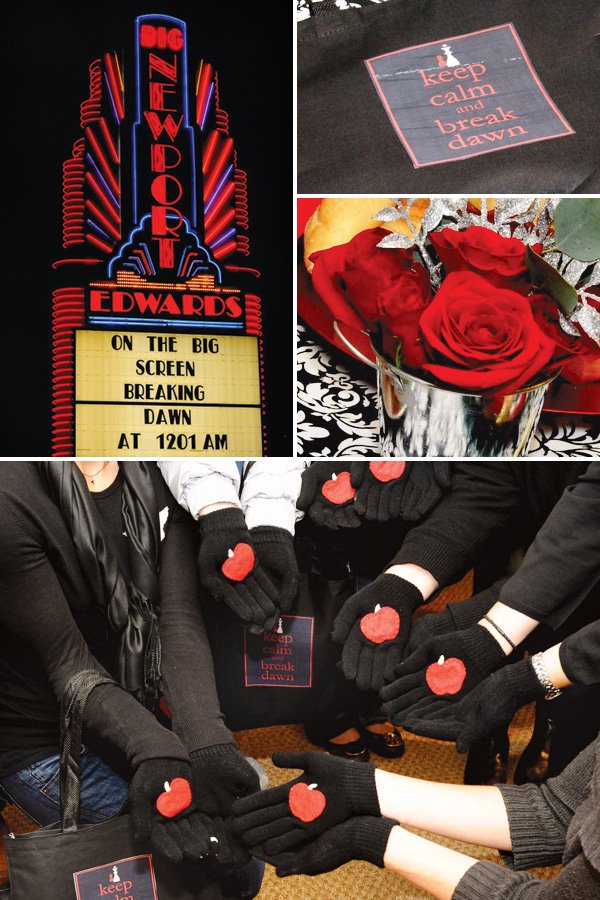 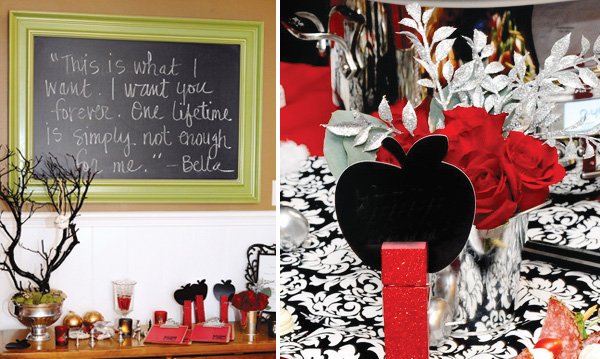 PARTY DETAILS, as told by Erin…
:

I hosted a Pre-Premiere party, the night Breaking Dawn came out, for about 30 girlfriends.

That night, the house was taken over with everything black, red and sparkly. I set the tables with red table cloths topped with black & white damask runners. Flower arrangements were red roses in silver buckets with glittery foliage. There were candles everywhere – tall tapers, red & black votives, and even a bloody one in an urn outside by the drinks! (Easily made with a white candle from the $1 store and some red sealing wax.) I also incorporated chess pieces (destash) and spray painted, apples and feathers where ever I could. I bought several yards of 35mm film (it was actually Eclipse, also found on Etsy) and draped it around the tables.

For the food and drink, I went with an Italian theme. Bella and Edward’s first date was at an Italian restaurant… the Volturi are from Italy… Bella flew to Italy to rescue Edward… so, it seemed like a good idea! I served minestrone soup and caprese skewers for dinner. The wine was from Montepulciano (the town where New Moon was filmed), so technically it really was Volterra wine! I made an Italian looking wine label with the Volturi crest on it to put on the wine bottles. I also had “Vampire’s Dream” shots served in syringes just to be totally over the top. The water bottle labels are free printables from HWTM. For dessert I made Port Wine & Chocolate Cherry cupcakes.

I also planned games for the party. We played “Name That Vampire” and “Twilight Trivia.” For Name That Vampire, I made numbered pictures of 20 different Vampires, mounted them on some glittery paper, and hung them across my plate glass window with twine and glittered clothes pins. I made up an answer sheet complete with Bella & Edward pics and quotes. I found the blood syringe pens at Oriental Trading on super sale after Halloween! Twilight Trivia was a Power Point I projected onto our Tree Screen in the front yard (a huge screen and LCD projector my teacher husband brings home from his classroom and hangs from our large tree!) Winners of both games received prizes of NOX Twilight nail polish, Red Rose Statement Angel Face Designs earrings in a cute tin I made, and a Golden Onion, of course. I got a little obsessed with metallic spray paint this party.

And you can’t have a party without party favors, right?! I made Swag Bags for everyone filled with fabulous Twilight Themed Treats! The bags were black canvas that I labeled with “Keep Calm and Break Dawn” on the outside. Inside, guests found a 35mm film strip bookmark (I just cut the film into 10 frame pieces and laminated,) gummy fangs, a fang ring, a bag of candy blood (type V for Vegetarian prescribed by Dr. Carlisle Cullen, of course) feathers, a CD I made with songs from all 4 movie soundtracks (printed the CD sleeves on red card stock and then sewed up the sides with black thread. I loved how they turned out!) Apple mittens, and a handwritten card thanking everyone for indulging me in my crazy!

The mittens were my favorite part. I found the black mittens in the $1 bin at Michael’s about a month before the party. I knew we would be standing out in the cold waiting for the movie to start at midnight, so I bought them up! I wasn’t sure how I would make them “Twilight” themed however. First I thought of stitching a Queen chess piece to the outside or adding a black and white checkered ruffle to the cuff. But then, I thought of adding the felted apple to the inside. When everyone put on their mittens and did the “Twilight pose,” I must admit I squealed with delight! It’s so fun when a vision you have comes to life and is exactly what you wanted. Huge THANKS to my mom, who helped me hand cut and blanket stitch 30 apples!!

Finally it was time to leave for the movie! I had packaged Werewolf Kibble and Vampire Bites for everyone to take with them. (Mommy Holly made the tags special for me!) I tied glow in the dark fangs to the Vampire Bites. The bites were pretzel squares topped with white chocolate circles, then I piped little red blood “bite marks” onto each white circle. They were cute! I also threw in some licorice. And…I embellished some popcorn boxes too…cause when I get going, it’s really hard for me to stop.