GET 20% OFF YOUR ORDER with code: MAKEITFUN
Skip to content
KIDS BIRTHDAY, Parties for Boys, Theme Parties 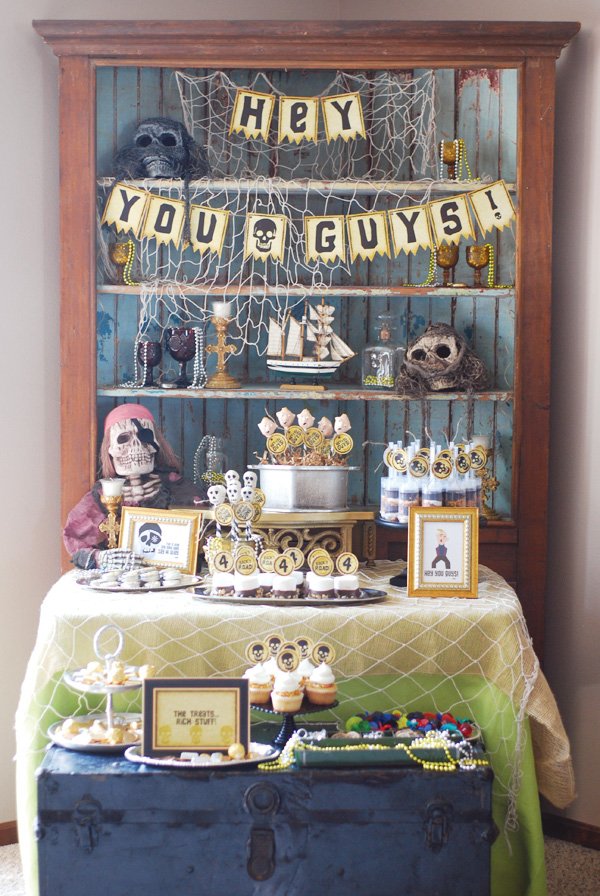 Last year, Audrey of Sweet Cheeks Tasty Treats dreamed up an adorable Vintage Tractor-Inspired Birthday Party for her son, and this year she did an equally incredible job with the GOONIES Themed Party he requested. What a fun theme… little Dane’s got good taste already! ;) We’re loving all the classic movie quotes and details Audrey worked into this birthday party, including lots of pirate themed elements to create the look. For any other fans of The Goonies looking to bring the movie to life in party form, this is some of the best inspiration you’ll find! 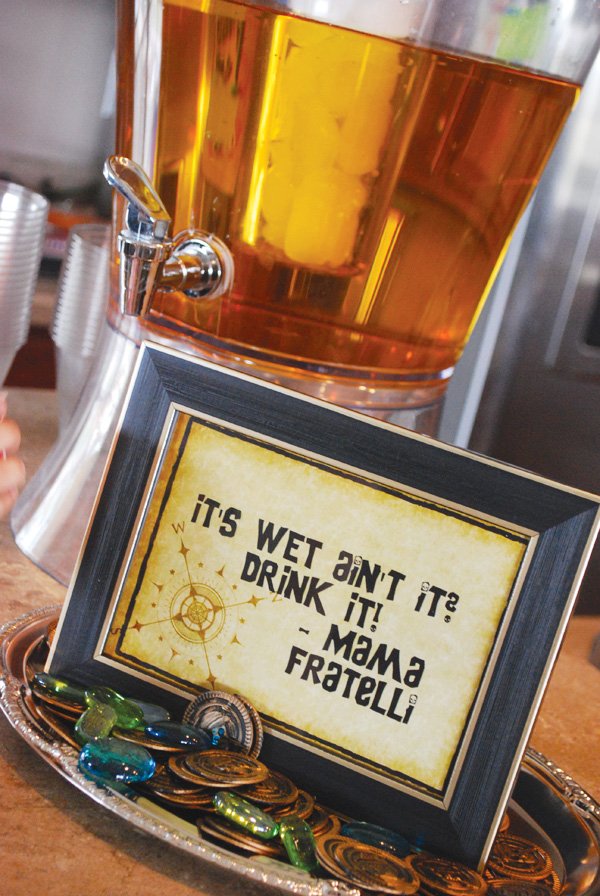 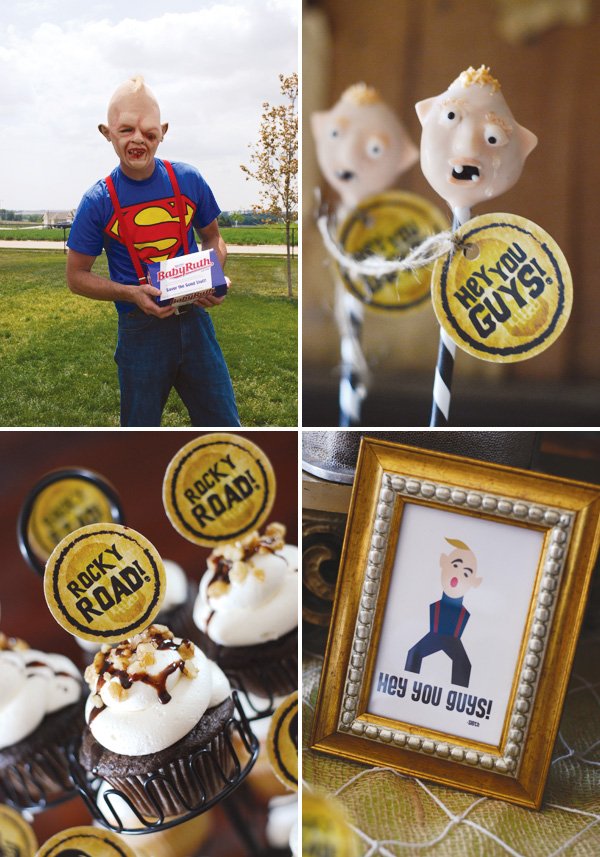 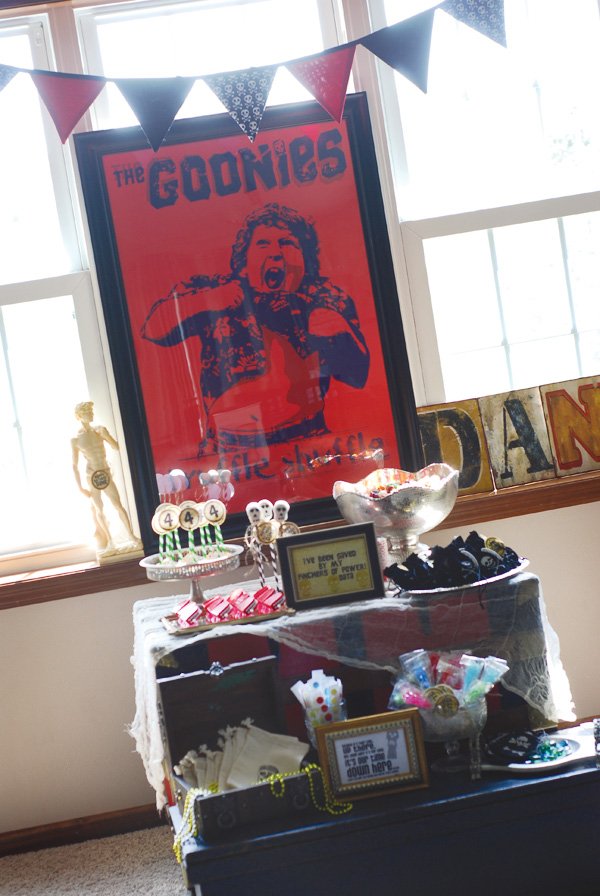 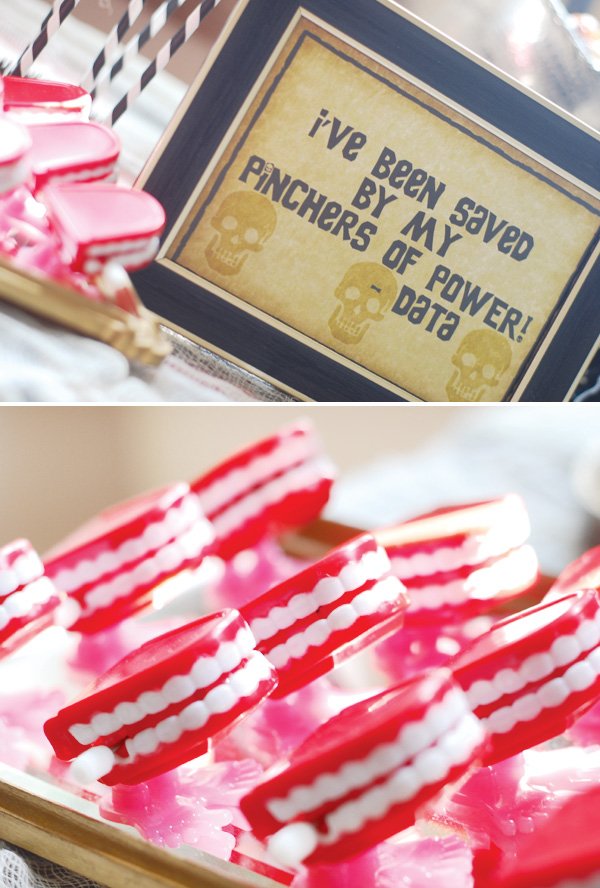 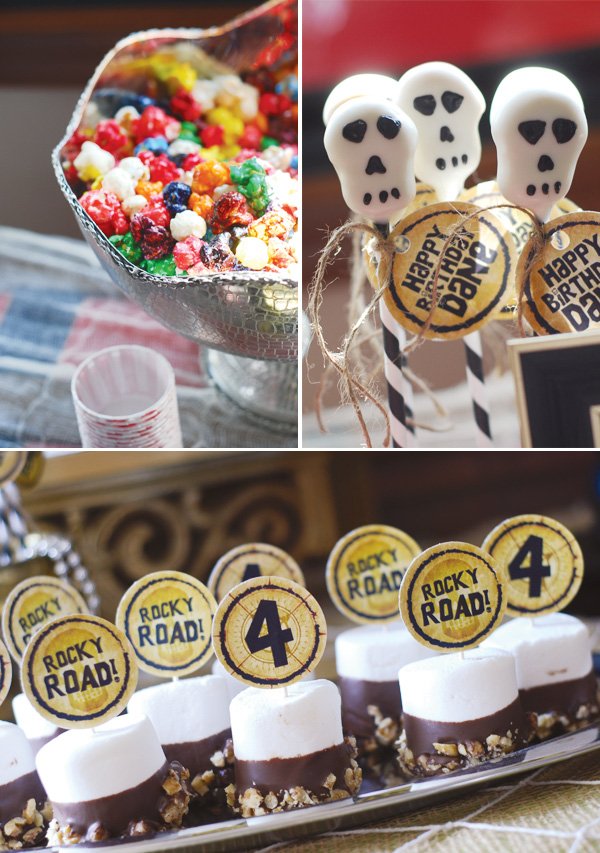 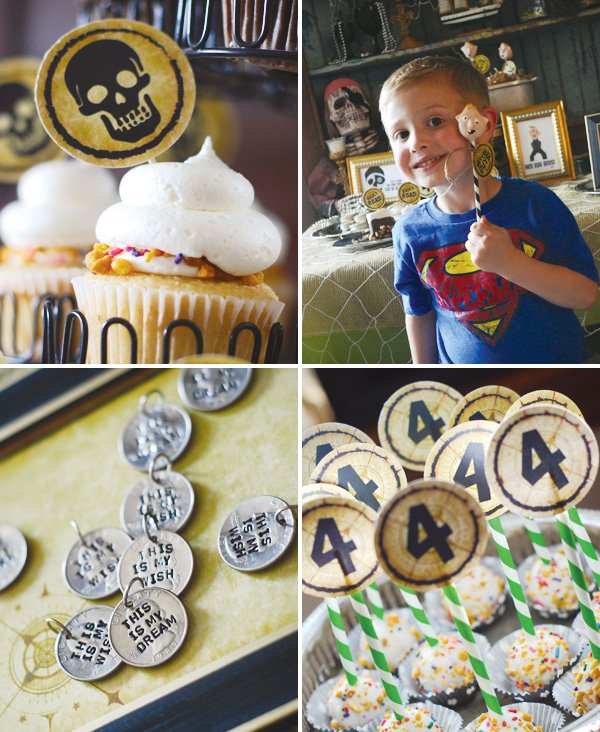 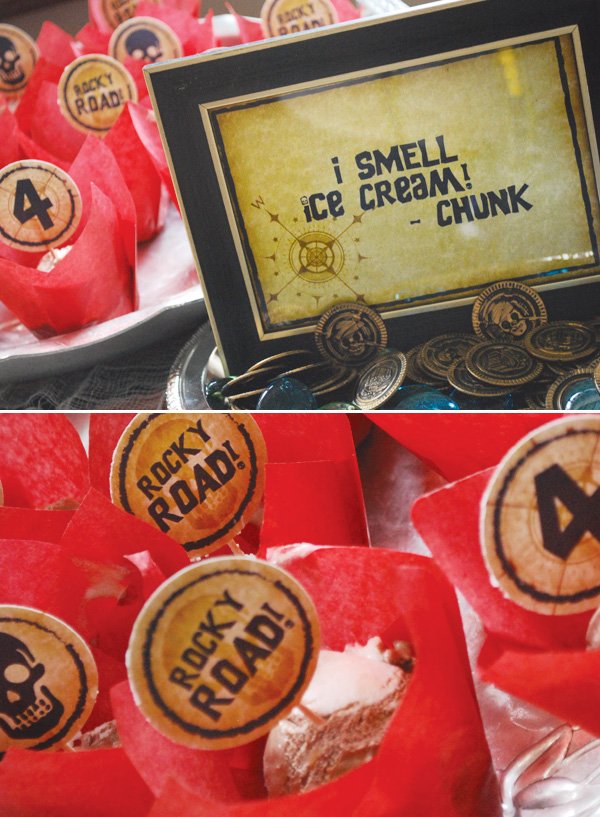 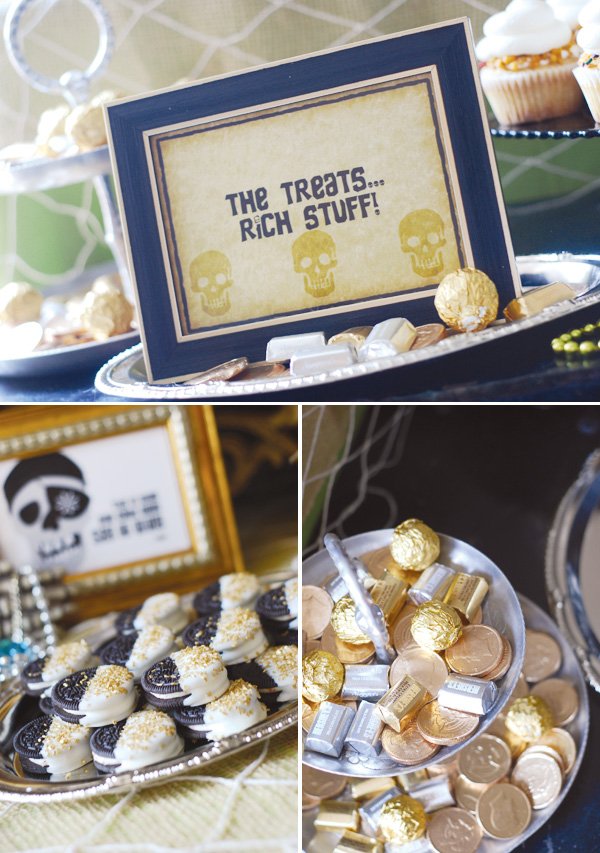 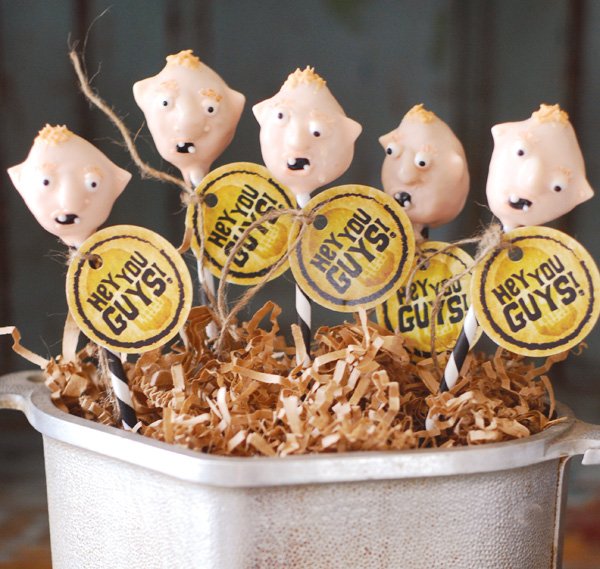 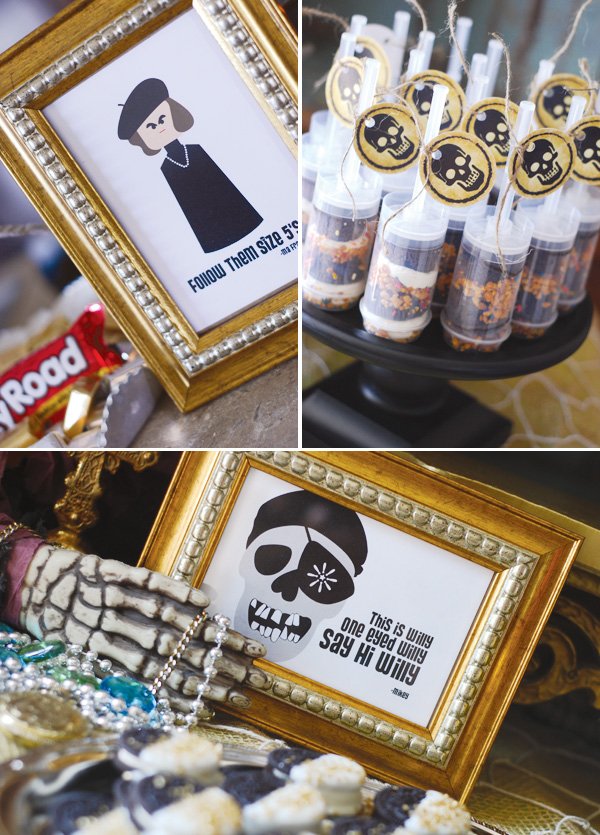 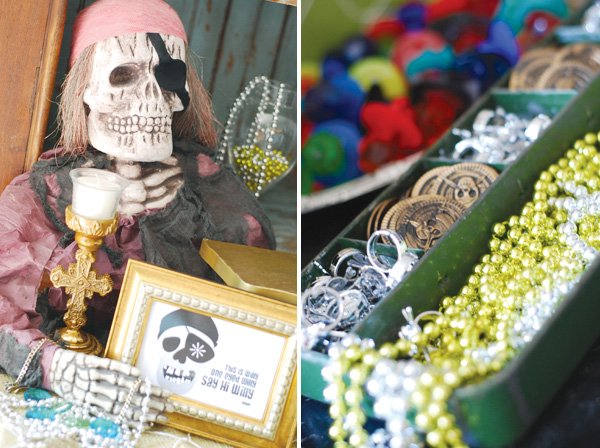 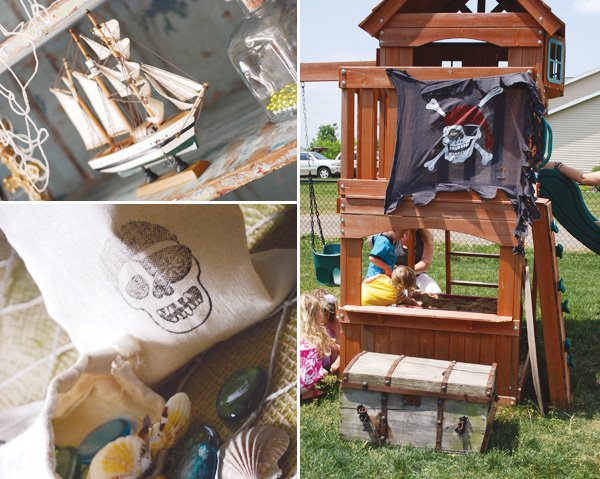 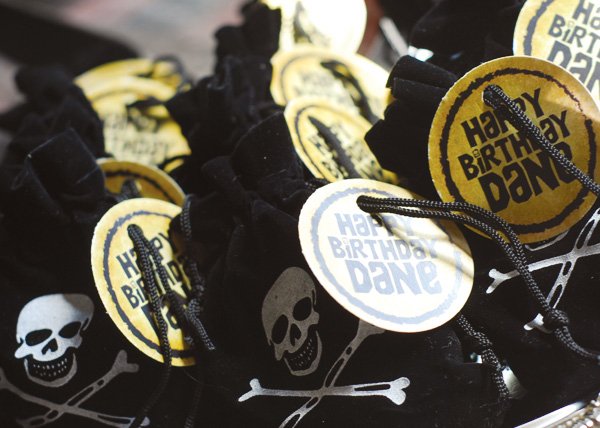 PARTY DETAILS, as told by Audrey…

THEME & DECORATIONS
To celebrate my son’s 4th birthday we planned a GOONIES themed party! We are all BIG fans of the movie around here, and after all the guests left he told me it was his “BEST party EVER!”

When Dane originally told me he wanted a GOONIES party, I have to admit, I spent a couple of weeks trying to convince him that maybe he wanted a different party theme… one that was a little easier to plan! He had his mind made-up and I figured out a way to make it work. I decided we’d have GOONIES elements, with some pirate decorations, skulls, lots of treasure and hoped it would all come together. I tried really hard to not make it just a pirate party and didn’t want a Halloween feel… I think the end result was more than I could have hoped for!

Squared Party Printables created a themed party package for me. It really gave the party a cohesive feel! I wanted to incorporate several quotes from the movie in the printables, and they looked great framed throughout the party. I used the 2” cupcake toppers on so many things… cupcakes (of course), Cake Pops, Cupcake Shooters, favor bags and several other treats!

I found a few different GOONIES movie posters online and hand them hanging throughout the house. We framed the Truffle Shuffle poster and plan on hanging it in my son’s room after the party.

I also framed some printed GOONIES cards from Thunderpeep Designs. She had created caricature-style renditions of some of the key characters, Sloth, Mama Fratelli and One Eyed Willy.

I used a ton of borrowed items to decorate, along with lots of thrift store finds. My Grandma had most of the trunks that we used just tucked away in her basement. I also managed to borrow a Statue of David figure! I’m not sure that all of our guests got the movie reference on that one… but true fans of the movie thought it was hilarious!

FAVORS
The favor station included lots of fun goodies including ring pops, rock candy, skull rings, necklaces, jewels, golden coin candy, candied cornfetti, eye patches and Pinchers of Power, to name a few. I put out paper bags and skeleton stickers so the kids could decorate their own goody-sack to fill-up!

I also had some cool favors for the grown-ups at the party. Inspired by the Lost Garden Wishing Well scene from the movie, Two Jennifers created stamped quarter charms! Some were stamped with “My Wish” and some with “My Dream.” They look great on necklaces or even key chains and turned out so super cool!

DESSERTS
I created all of the desserts for the party… I love doing it and had lots of fun ideas! To honor our favorite character from the movie, Sloth, I made several Rocky Road-inspired desserts! We served Rocky Road Cupcakes, giant marshmallows dipped in chocolate and then rolled in walnuts, and cupcake shooters. I pre-scooped Rocky Road ice cream into cupcake liners…and then forgot to get them out during the party! I also made “Buried Treasure” Cupcakes, they had a layer of Crunch Coat topping under the frosting… so fun! I have to say, out of all the desserts… the Cake Pops stole the show! Dane had requested some skeleton pops and… SLOTH Cake Pops! I figured he was already lumpy to start with, so they were worth a shot! They turned out hilariously cute… I was literally laughing out-loud as I was making them.

Another fun movie reference, I wanted to serve a drink that looked like the grody-water Mama Fratelli serves to the boys in the Lighthouse. I made an Apple Juice/White Grape Juice combination and put it in our big beverage dispenser. Next to it, I put a framed printable with a quote from that scene in the movie.

ACTIVITIES
One activity the kids really enjoyed was digging for buried treasure in our backyard. We buried a bunch of seashells and colored gems in our sandbox and the kids dug away! They put their buried treasure in some super cute, hand-stamped canvas bags from Thunderpeep Designs. We also had a bench in the backyard so they could walk-the-plank! I planned on having a Truffle Shuffle dance-off, but the kids were having so much fun playing outside, we just never got around to it!

When I started planning the GOONIES party my son asked me if we could invite Sloth to the party! I immediately got online, found a Sloth mask, Superman Shirt, red suspenders and made the purchase. The next day, Dane informed me that maybe Sloth shouldn’t come to the party because, “Sloth kinda freaks me out sometimes Mom!” LOL! I told him it was rude to uninvite people, but if he was scared when Sloth got to the party, he didn’t have to see him. Well… Sloth arrived… Baby Ruth Bars in-hand… and most of the kids were willing to go up to him since he was giving out full-size candy bars. Dane hid in his playhouse and told Sloth he could just toss one up to him… SO funny!

After all of our guests went home, Dane still told me his favorite part of the party was when Sloth came, but quickly added that he didn’t want him to visit again anytime soon.