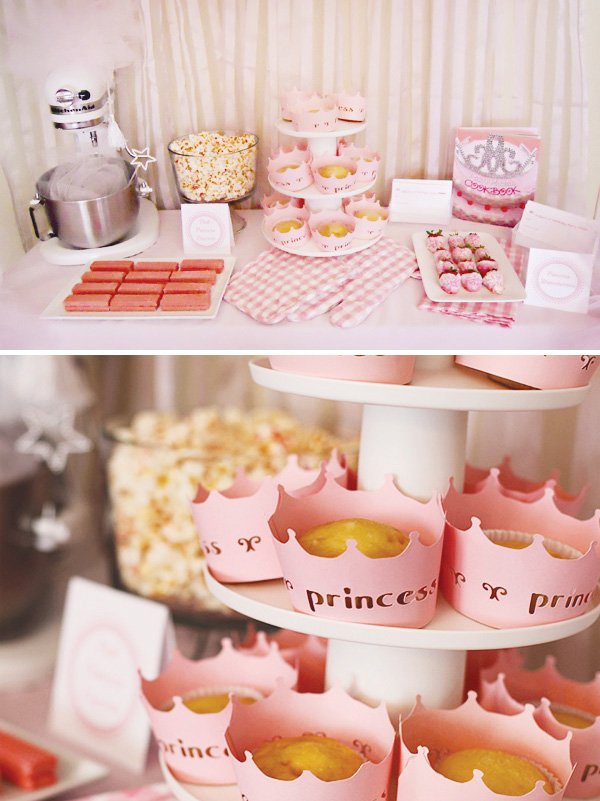 Inspired by the Pink Princess Cookbook, twin birthday girls Ashlyn & Adyson decided they wanted a “Princess Cooking Party” for their 5th birthday… how fun! With activities like pizza dough rolling, cupcake decorating, and working up an appetite taking cracks at the giant crown-shaped pinata, Mom (Shelley of Divine Party Concepts) definitely whipped up a cooking party fit for a princess… or two! ;) 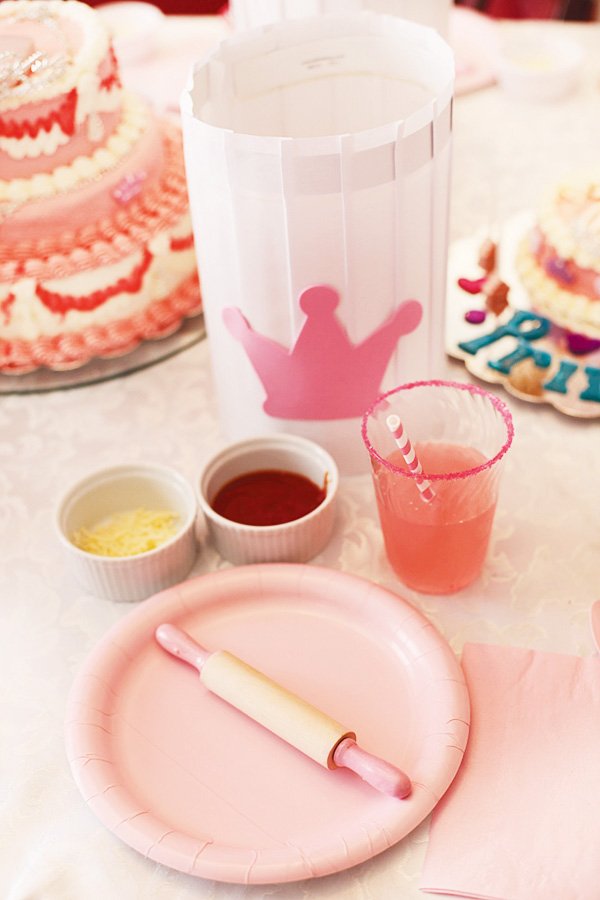 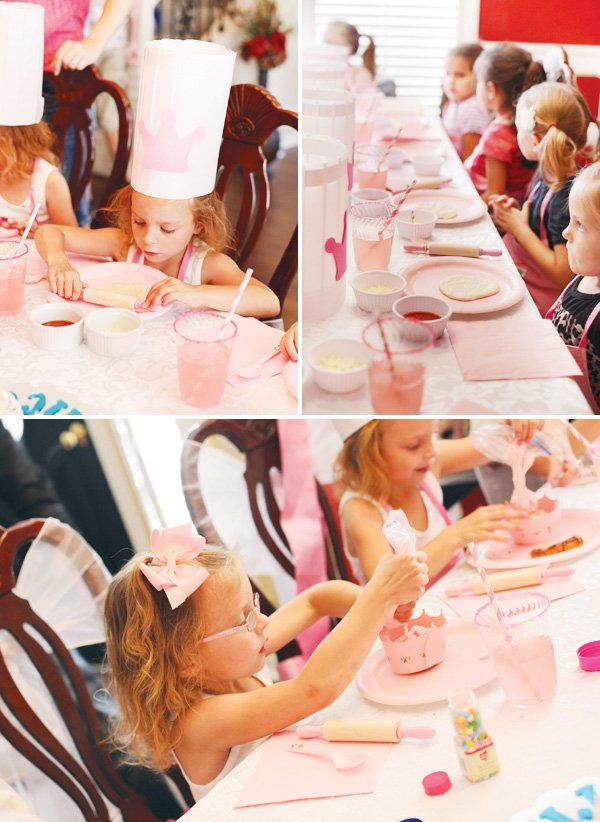 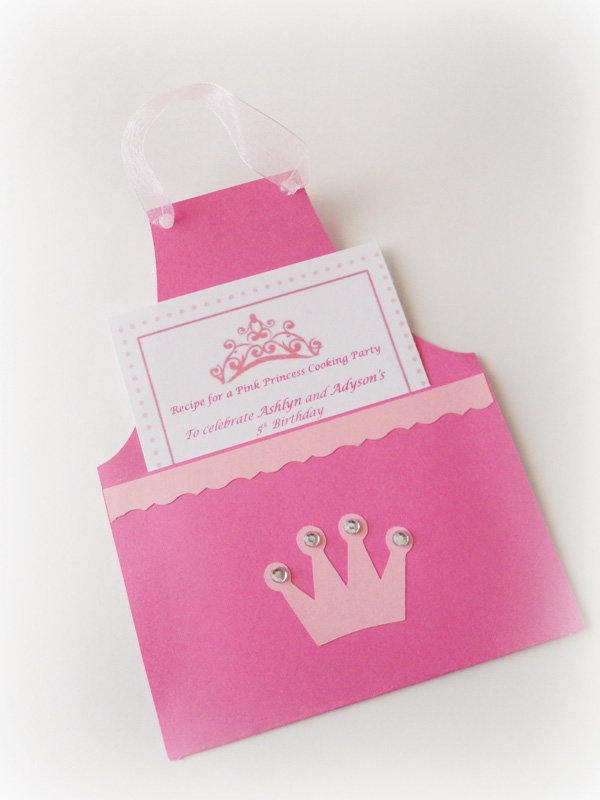 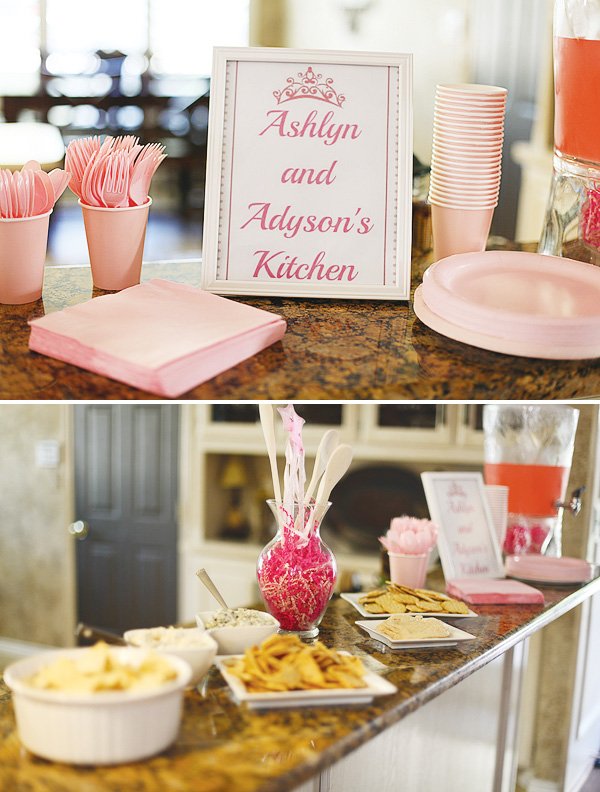 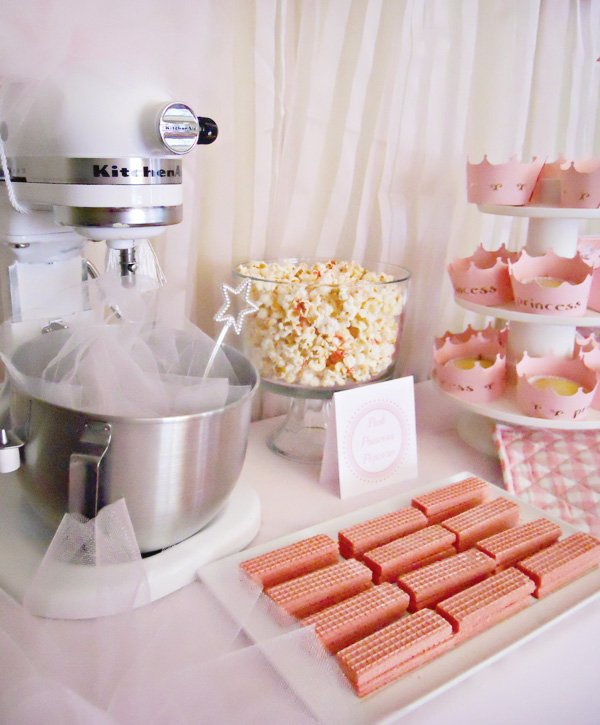 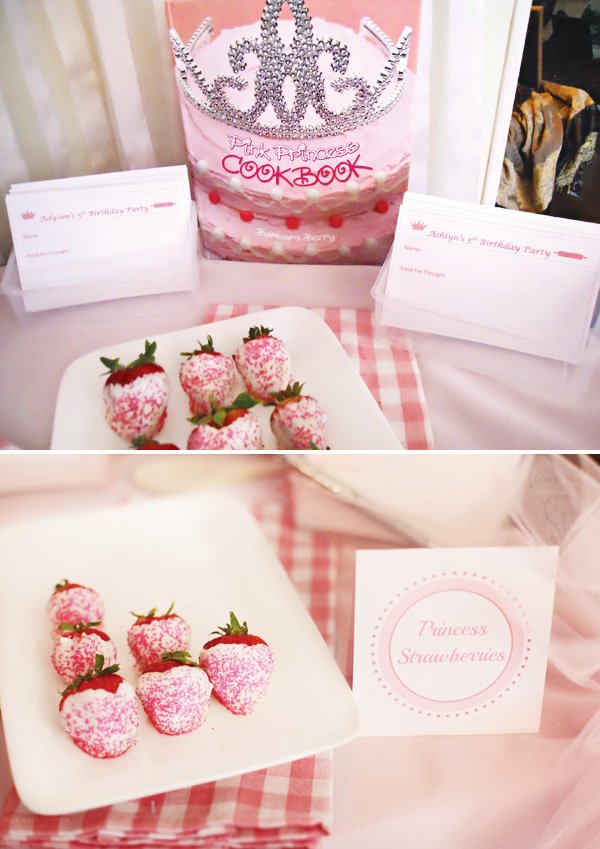 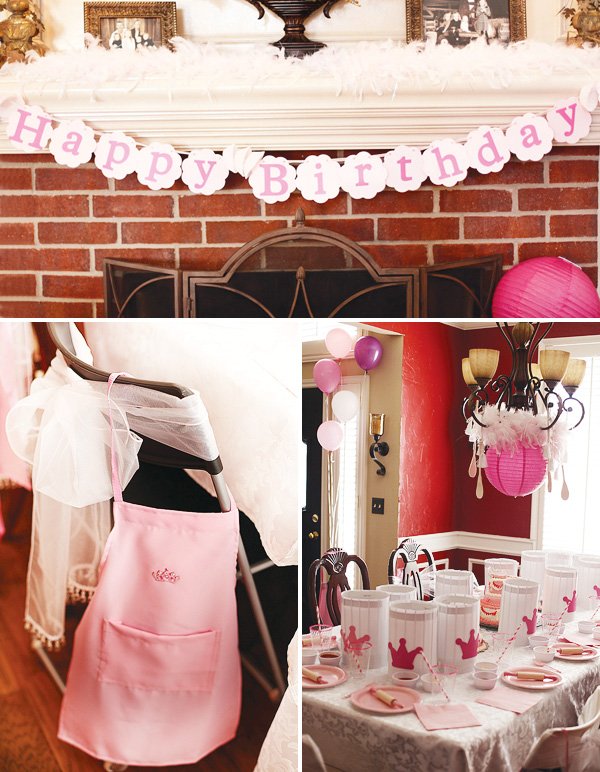 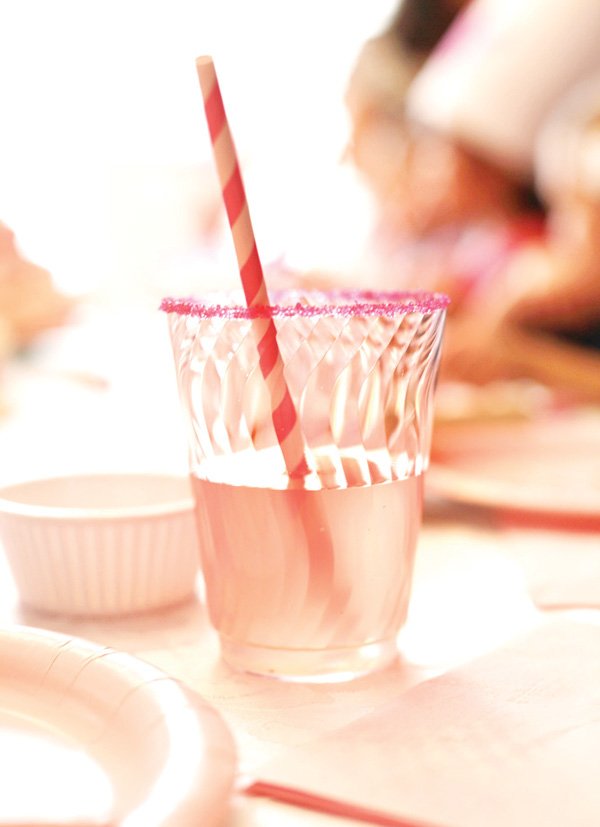 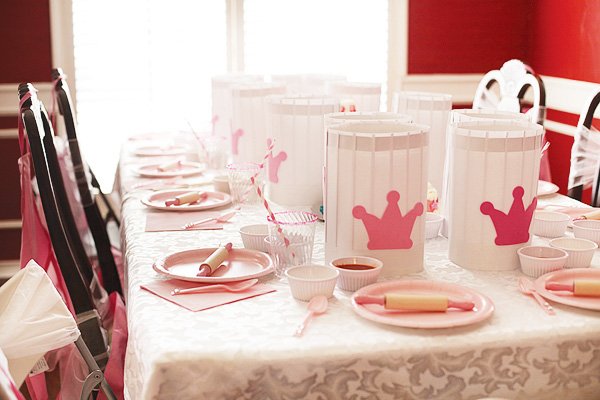 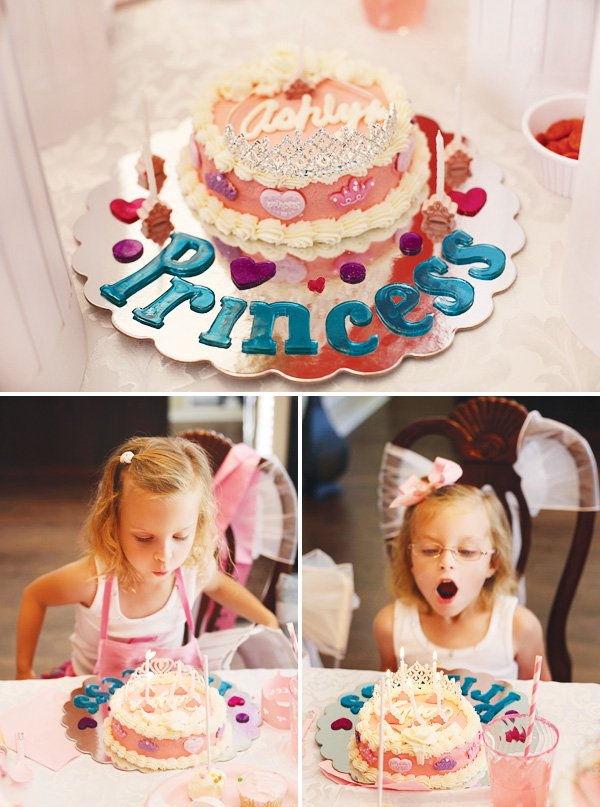 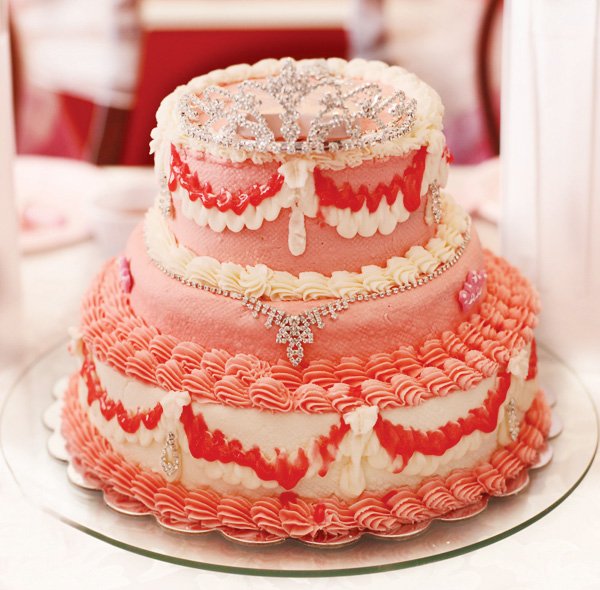 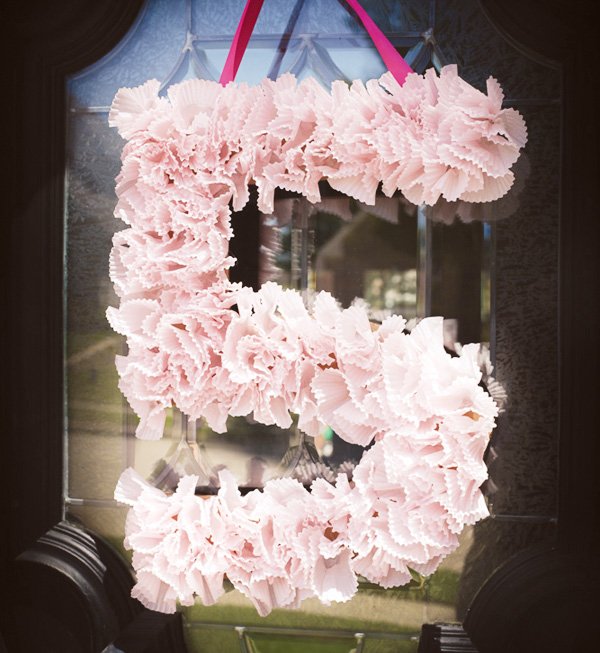 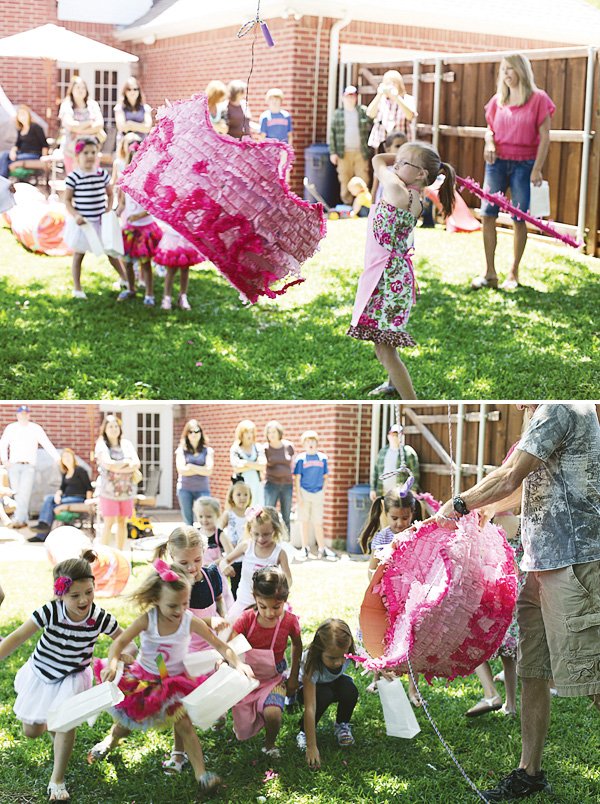 PARTY DETAILS, as told by Shelley…

My twin daughter’s had seen the Princess Cookbook at a friend’s house so when they were deciding what theme they wanted for their 5th birthday one of them suggested a Pink Princess Cooking Party. They both loved this idea and they helped with a lot of the planning!

INVITATIONS
I made an apron invitation and added a tiara and some bling to fit the entire theme.  The information insert card was made to resemble a recipe card.

ACTIVITIES
As each guest arrived, they received a princess apron and princess chef hat.  Each place setting had a rolling pin to roll out pizza dough and toppings for the pizza.  While the pizzas were cooking, we headed outside for some fun with the princess tiara piñata.  After that, the pizzas were ready to eat and the girls did a great job baking them.  Next, the princess chefs got to decorate cupcakes.  I think they enjoyed this the most.  After the cupcakes, they also decorated ice cream on a stick with sprinkles.

EATS & SWEETS
I had set out dips for the parents to enjoy and we also had pink princess strawberries, pink princess popcorn, strawberry cookies and pink princess lemonade.  The girls each had their own individual cake with their names on it in addition to the bigger cake that was a beautiful princess cake with jewels that they were able to keep.

DECORATIONS & GOODIES
My girls requested that EVERYTHING be pink for this party (in fact one of them wanted to paint the entire downstairs pink just for the party!)  For the party, we made a number 5 door hanger out of pink cupcake liners.  This was easy and something fun for my girls to help with.   I used boas, tulle poms and cooking utensils as décor.  I also make a banner that hung on the fire place with cupcake liners and cooking spoons.  All of the guests got to take home their aprons, hats, rolling pins and bag of treats from the piñata.

Everyone had so much fun and of course the best thing is to see my girls smiling faces and enjoying this special day!