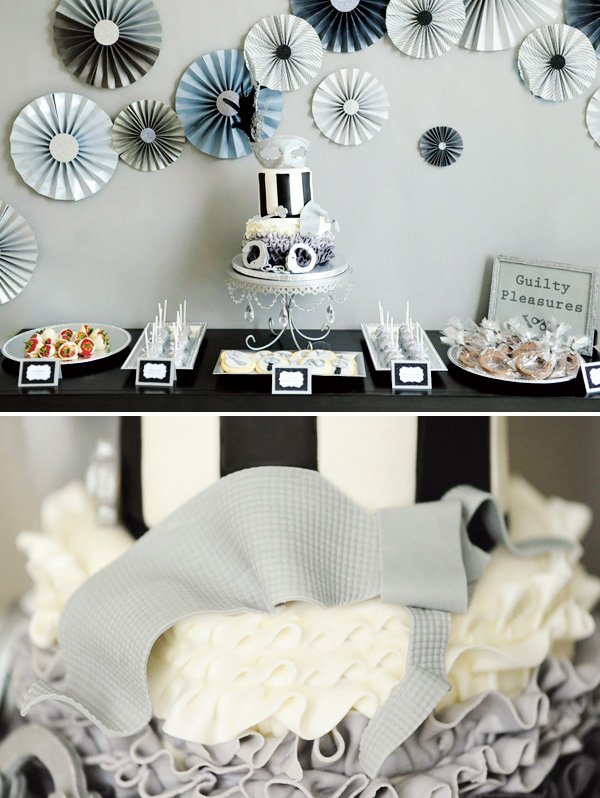 We have another 50 Shades of Grey Themed Birthday to share for the EL James’ fans out there! With glam glitter cake pops, fabulous favors and gorgeous guilty pleasures on the dessert table… Ashley of Sole Luxe Events would have me tied up at this birthday party all night! ;) 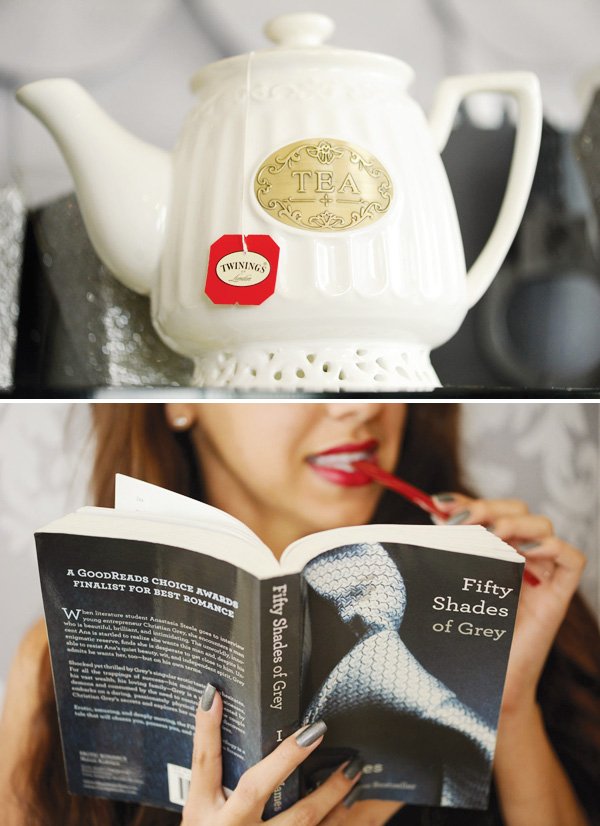 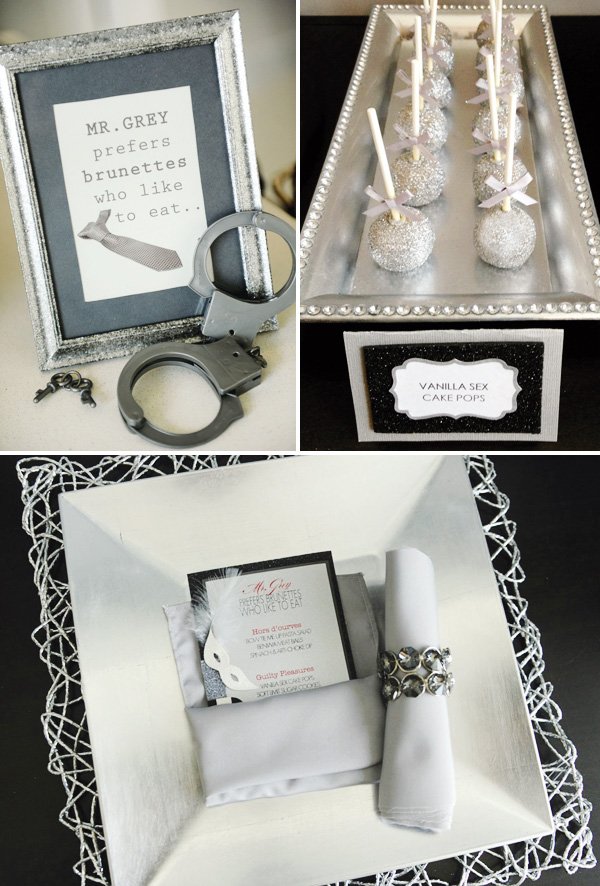 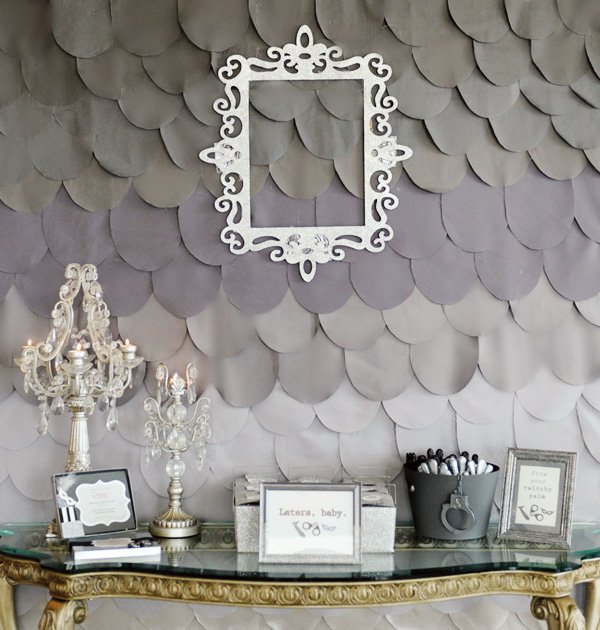 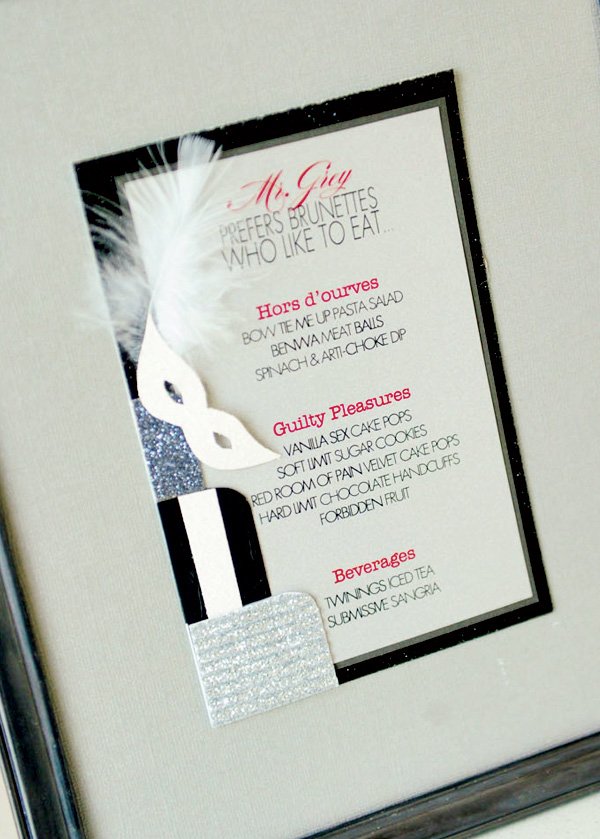 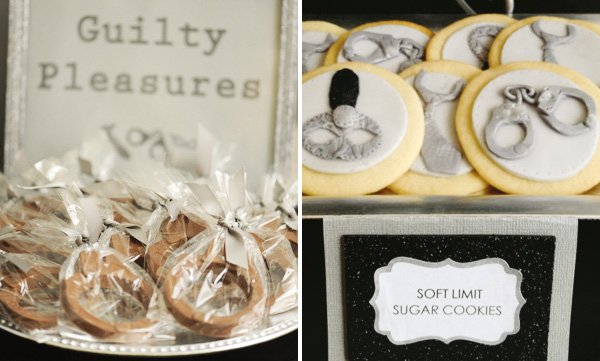 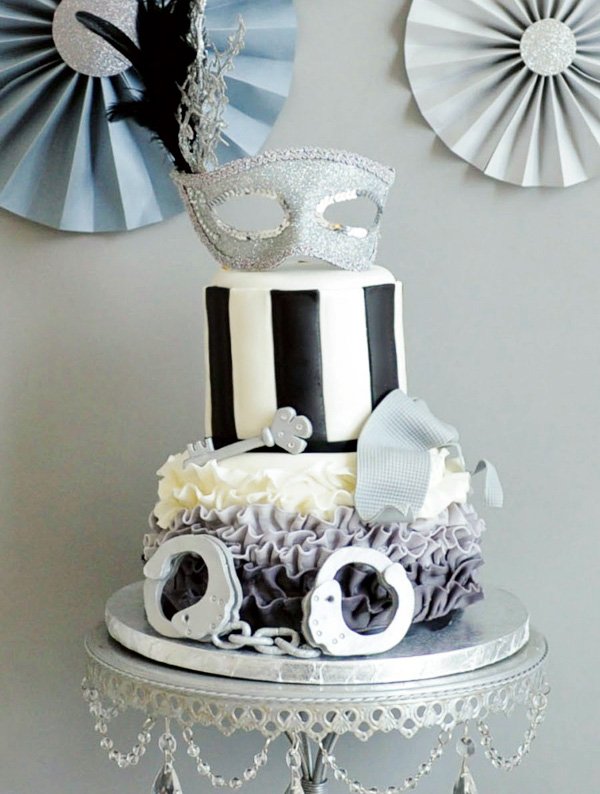 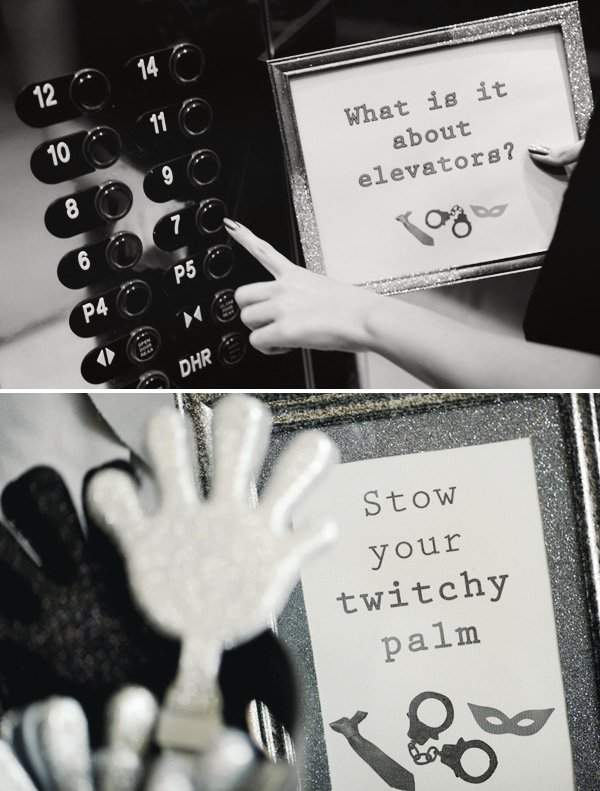 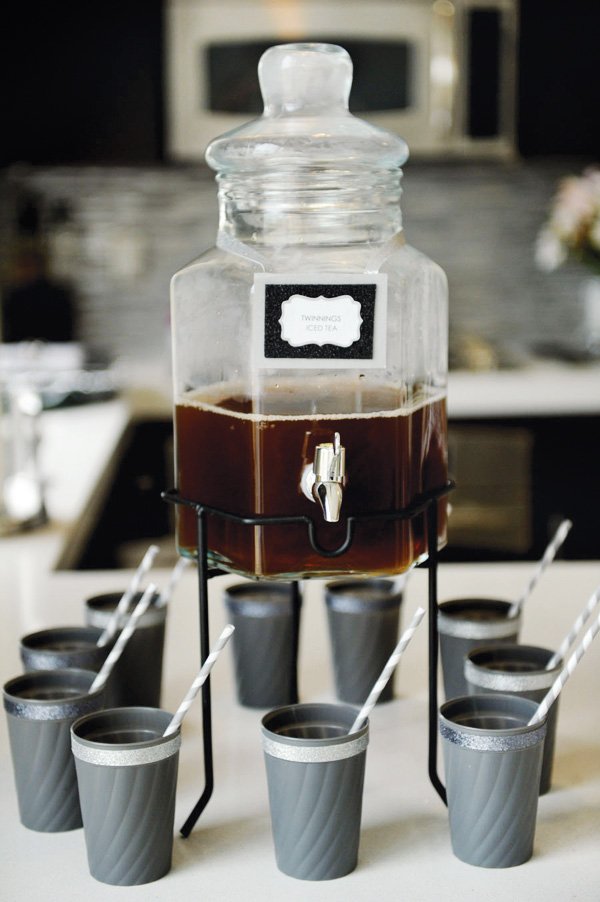 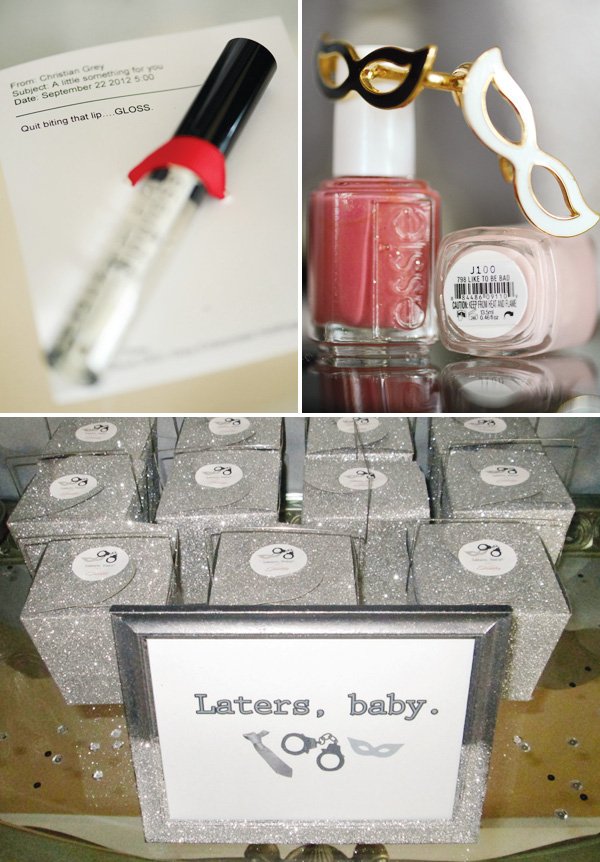 What else would a single 20-something gal want on her birthday other than a “50 Shades of Grey” themed party with her closest friends? I know, I know, pretty sure a “real life Christian Grey” would be at the top of that list but lets face it ladies, he’s fictional (insert loud sob here). So, you do the next best thing; let your Inner Goddess out to play and have some fun with all of Mr. Grey’s “50 shades” while enjoying the company of your best friends. And that’s just what we did… After being obsessed with this trilogy and longing for more after finishing the books, it was quite easy to gather up ideas and run with this theme!

DECOR
First and foremost, I knew everything would be GRAY, lots & lots of gray, silver, metals & etc. The best part was being able to mix and match all the different “shades” of gray and not have to worry about them matching exactly. I also knew that I wanted to add a bit of “bling” to give it that wow-factor and this is where the glitter fun came to play! Glitter was used everywhere possible, from glittered frames, chinese take out boxes, hand clappers to even the cake pops! It added that sparkle to catch your eye and the femininity I wanted to portray.

INVITATIONS
Starting with the invitations, I wanted the guest to feel the “glam” of the event (sort of like the ridiculous amounts of money Mr. Grey has! Haha). The invitations, made by Monica of Le Petite Papier, were an amazing 3D silver boxed invite. The outside of the box was wrapped with a black satin ribbon down the middle where it met with a quote from the book regarding Anastasia’s “Inner Goddess”, along with a pair of gun metal handcuffs. Once opened, you were directed to the 3D cutouts of the cake (I’ll explain more of the cake a little later) made up of different shades of gray glitter, black and white glittered card stock and a white glittered mask with a matching white feather. The event information was adorned with silver metallic paper, textured gray card stock and a hint of red in the font. Monica had the most amazing idea ever, in incorporating the typewriter-like font from the book in both the invite and menu. For the menus, we wanted to keep the same look and make sure it all stayed cohesive. The menu started off with an enticing line, saying; “Mr. Grey prefers brunettes who like to eat…” and then listed all the delicious food! We’ll get to that next.

FOOD & DRINK
It was coincidental, but the venue worked out great with this theme. The guest would take an ELEVATOR (yes, an elevator!) up to “Escala” where they arrived to an entrance table with a sign saying “What is it about elevators?”. Guest enjoyed appetizers such as “Bow TIE ME UP pasta salad”, “Spinach & Arti-CHOKE Dip” and “BENWA MeatBALLS”. For beverages, guest could choose between “TWINNINGS Iced TEA” or “SUBMISSIVE Sangria”.

DESSERTS
One of my favorite parts was putting together the dessert table & coming up with all the fun names that were made up of “RED ROOM OF PAIN Velvet Cake Pops”, “VANILLA SEX cake pops”, “SOFT LIMIT Sugar Cookies”, “HARD LIMIT Chocolate Handcuffs” & “FORBIDDEN Fruit” all tied in with a “Guilty Pleasures” sign. Since I wanted the dessert station to also be the main table we put the cake in the middle as the center of attention. The cake done by Ashley of Simply Sucré, was not only beautiful, but just as delicious! For the cake, I wanted to incorporate the three main “symbols” from all the books; the tie, mask & handcuffs. The cake began with a glittered gray mask (just like Anastasia’s) on the very top. For the first layer I wanted a bit of contrast and thought black & white stripes to symbolize the very unforgettable piano from the book, would be a great way to do that! Then of course, the second layer was a ruffled ombre look in different shades of gray. The inside of the cake was 3 layers of ombre as well. The cake was finished with gray and silver details such as handcuffs and the infamous gray tie.

As an element of surprise, I created a “Vanilla” Ice Cream Sundae Bar for the guest. Here they were able to create their own sundaes using “S&M” (Sprinkles & M&Ms, which were gray of course!), “WHIPPED cream”, FORBIDDEN fudge” and “CHARLIE TANGO Cherrys”. Along with these yummy toppings were framed quotes from the book where they talked about ice cream, cherrys & hot fudge! YUMM! Another mini surprise for the guest was a little photobooth fun. I had props made to the theme where each guest could take pictures and just be silly with!

FAVORS
Last but not least, each guest was given a goodie bag before they left, with quite a few more surprises inside. This favor box has to be, by far, one of my favorites. Much thought and creativity was put into it to be able to “tie it all” together in the end. Each goodie bag was a silver glittered chinese take out box, which enclosed the following:

A lip gloss tied to a mock email from Christian himself, A bag of Twinnings Breakfast Tea (Just like Anastasia’s favorite!), Nail Polishes all with names matching the theme (such as “All tied up”, “Guilty Pleasures”, “Masquerade Belle”), A masquerade ring, Massage oil, Sweets such as Twizzlers, Suggar Daddy and Now & Laters. All sealed with a “Laters Baby” thank you sticker. One of my favorite things was coming up with a little poem to explain each favor! The purpose of the favors (besides being fun!) was to encourage the girls to embrace & let out their “Inner Goddess” to play! Another little favor the guest got to take with them were glittered hand clappers that I renamed and decided to use as “twitchy palms”!! All these fun favors sat neatly in front of a DIY gray ombre backdrop made by my friend Olivia (Cookie) Trigo.

It was SO much fun planning this event and being able to run free with ideas. It was great to have such a fresh theme, that hadn’t been done! All the vendors contributed so much and it definitely couldn’t have been done without them! A big thank you to E.L James for writing such an enjoyable & different novel that inspired me to run a little wild with the mindset of what all girls really want… Fifty shades of fun & fabulous!