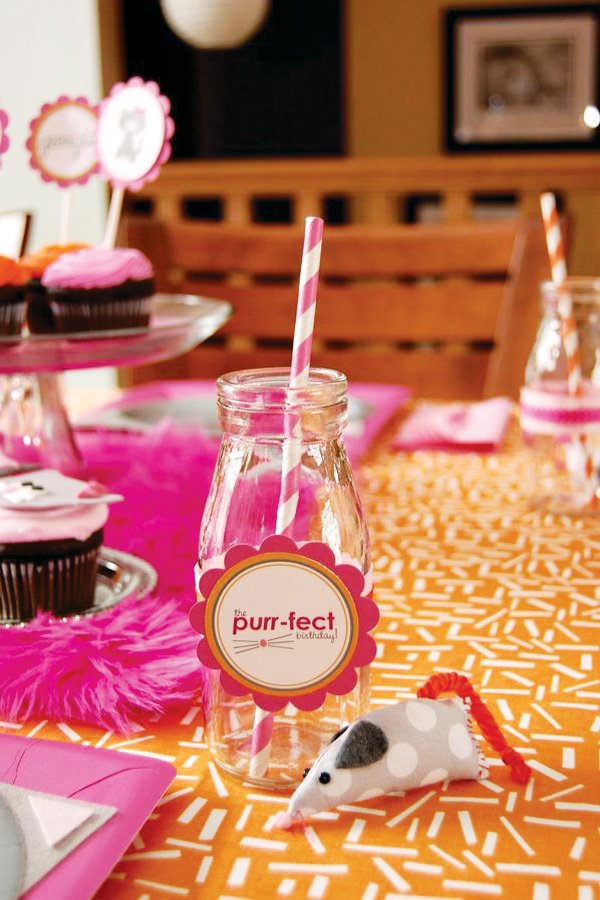 The cat’s out of the bag… this Cute Kitty Cat Party by Heather Nawolski is absolutely purr-fect! Georgia’s 5th birthday was the cat’s meow with all the clever & cute kitty decorations- I just love the cat paper lantern & the “adopt-a-cat” party favors! 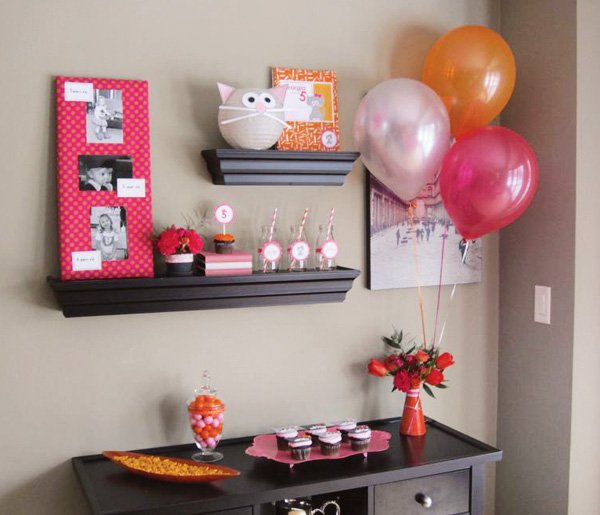 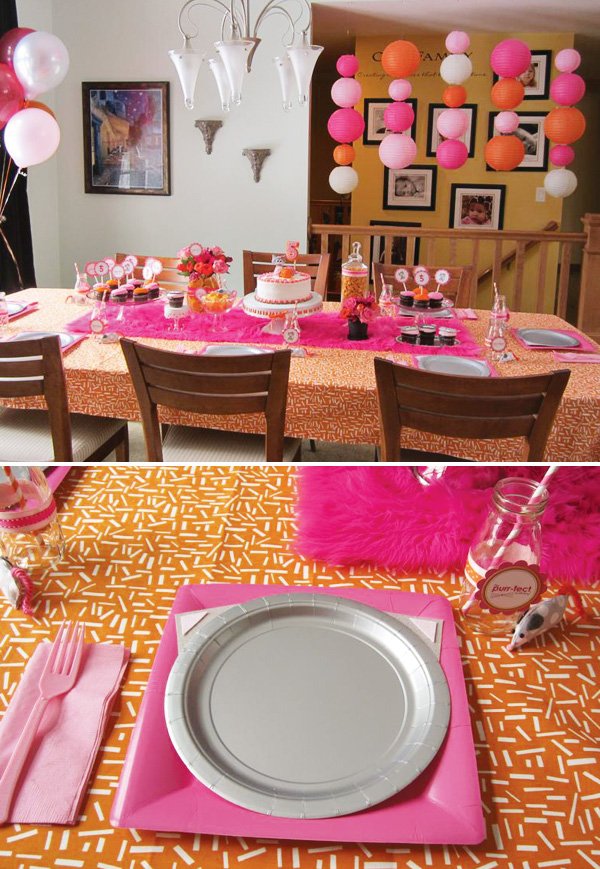 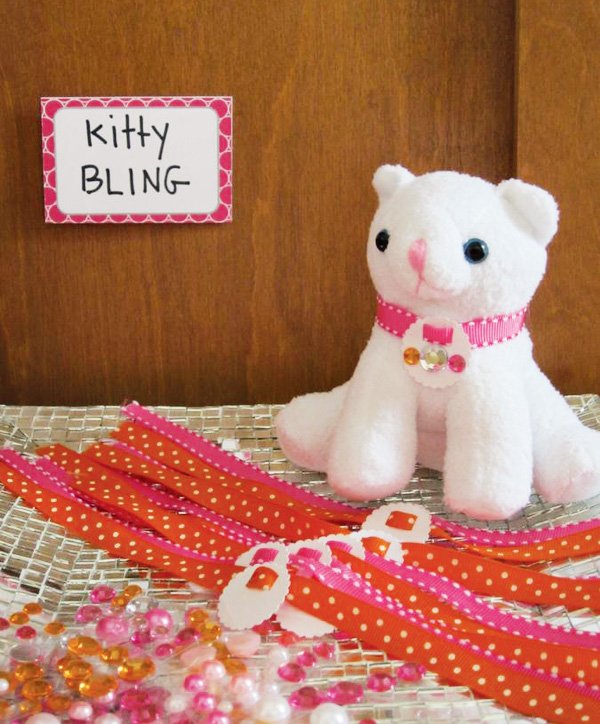 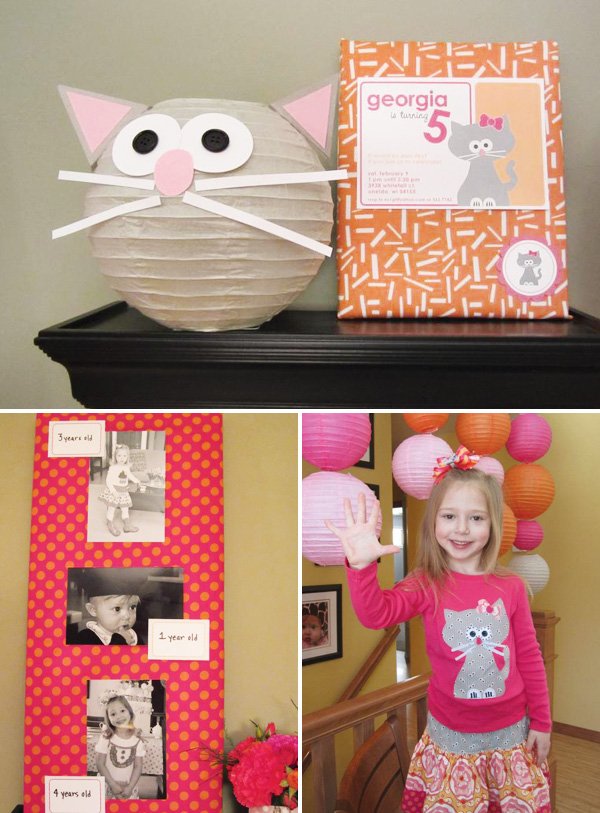 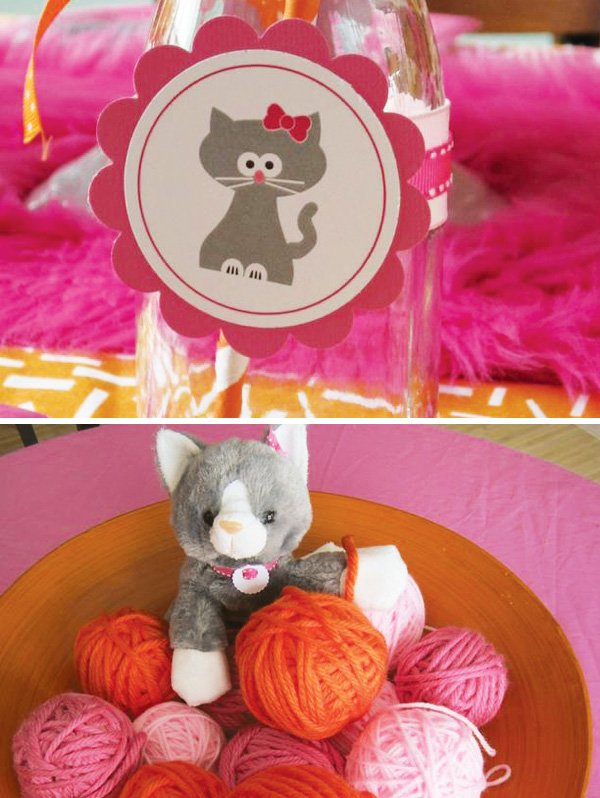 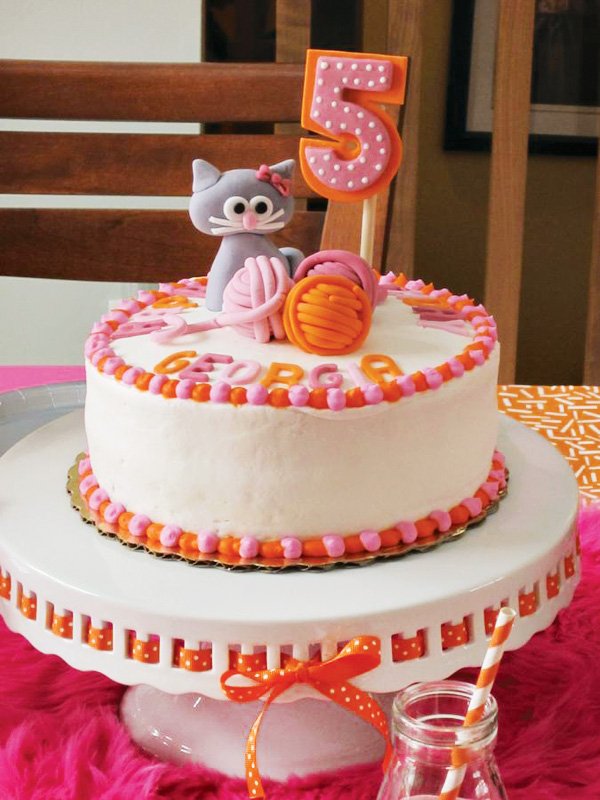 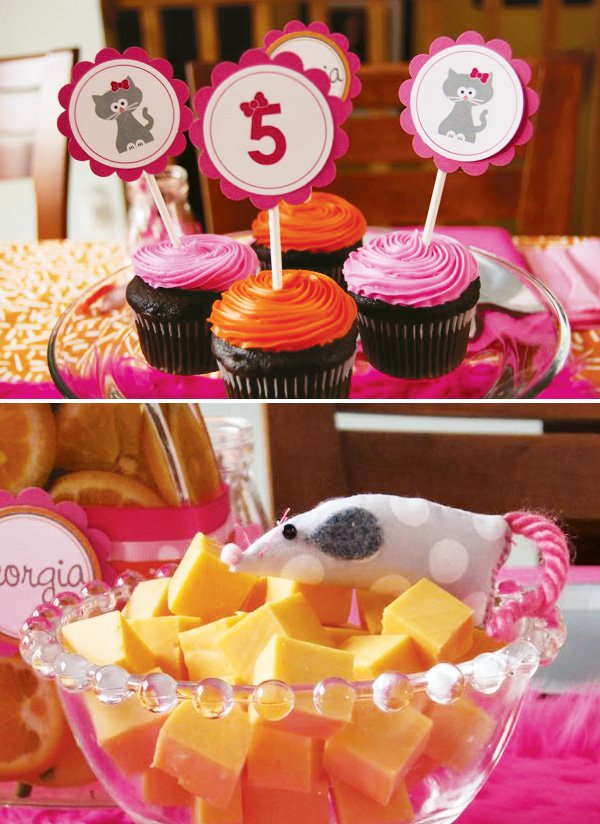 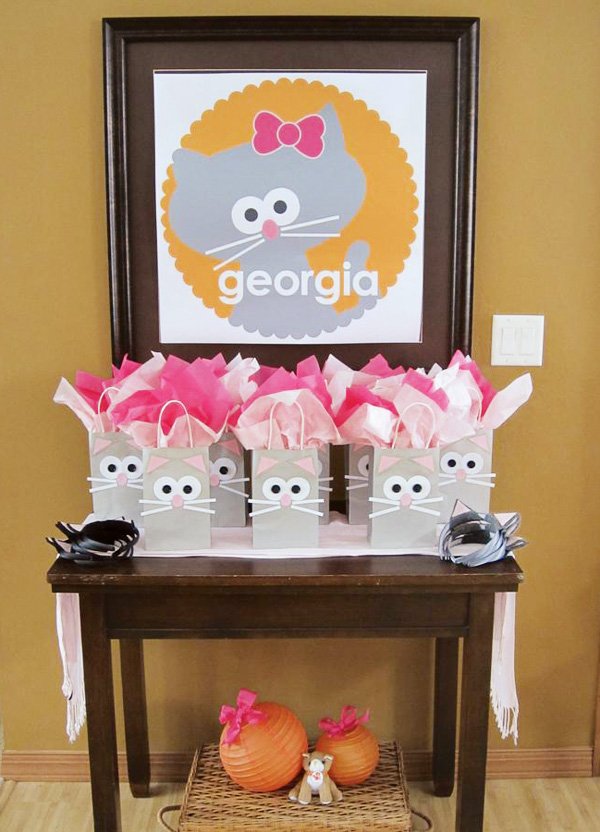 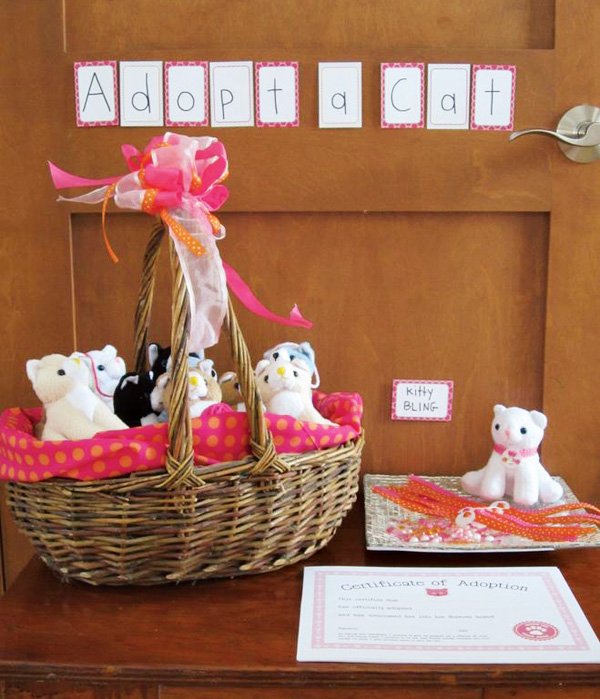 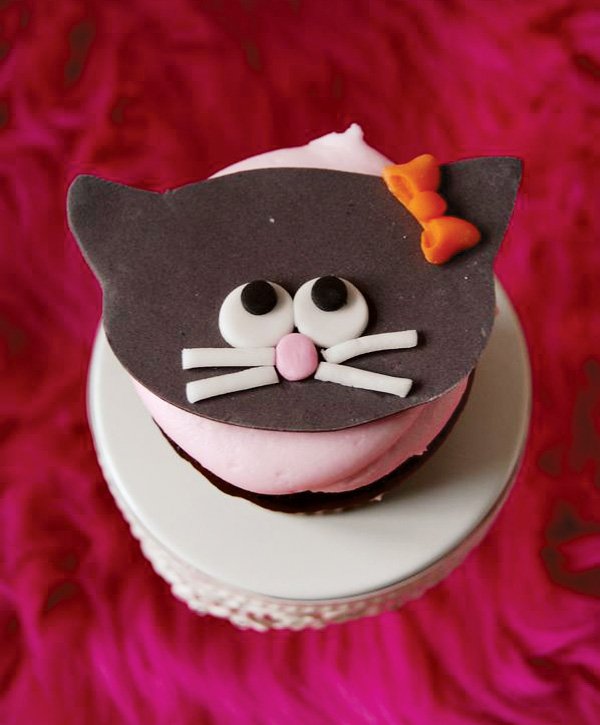 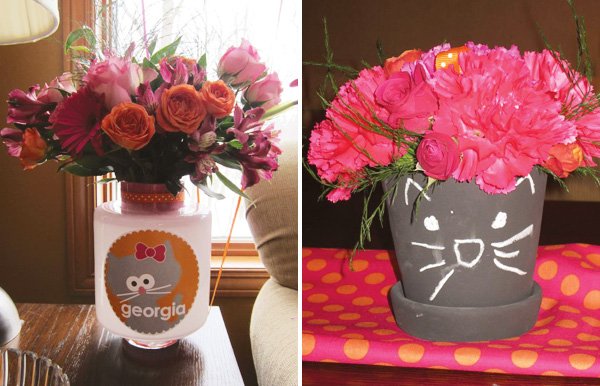 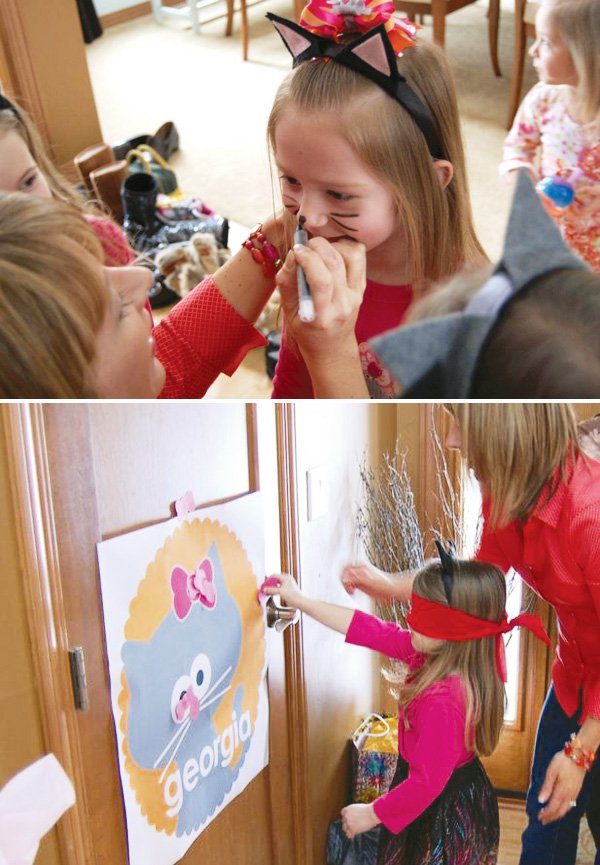 PARTY DETAILS, as told by Heather…

This kitty cat party was truly “purr-fect!” The color scheme was gray, hot pink and orange and was fashioned after our adorable invitation cat. Decorations included a “wall” of paper lanterns (simply hung by fishing line and then connected to one another), chalk pots with cat faces (with floral), a gray paper lantern made into a cat face, orange tablecloth made out of fabric with a hot pink “fur” table runner and paper plates with cat ears (hot glued a thick felt ear to the backs of the plates).  The food included a beautiful cake with a custom fondant cat topper with balls of yarn and cupcake toppers made to match our invitation cat.  Milk bottles with paper straws were used on the table with ribbon and paper circle accents.  A clear glass container with goldfish and a container of cheese with a fabric mouse added a sense of whimsy to the tablescape.

In another room, I needed a centerpiece.  I used a stuffed cat in a large bowl with balls of yarn that had many “oohing and aahing”.  I used extra fabric over picture frames to feature our invitation and to highlight my daughter at different ages (making the photos black and white).  A glass container with orange and pink gumballs finished off the space (which I found were less expensive to purchase individually then by the pound!).

The 5 year olds did a game of pin the bow on the cat, they wore their cat headbands (made by me) and I whiskered them up when they came in.  They had an adopt a cat station where they used “kitty bling” to make a collar (using ribbon I cut, a small paper medallion and then rhinestone stickers for them to accent).  We completed an online adoption certificate to make it “official”.  They then hunted their own mouse (I sewed one for each girl and put her name on it hidden within the house) with their new kitty cat.

I used the 5” cake paper centerpiece and had it blown up by a local printer to play the pin the bow on the cat game.  I used pink cardstock to cut the bows out and then a tacky wax for them to adhere it to the paper poster.  The favor bags were made with a plain gray paper bag.  I used a 2 “ paper punch for the eyes and added a button.  Paper ears and whiskers finished it off.  They included party items that were cat themed and my daughter insisted Kit-Kat bars be included! 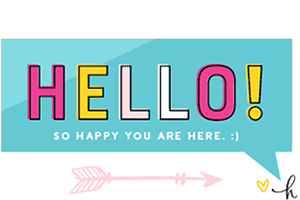