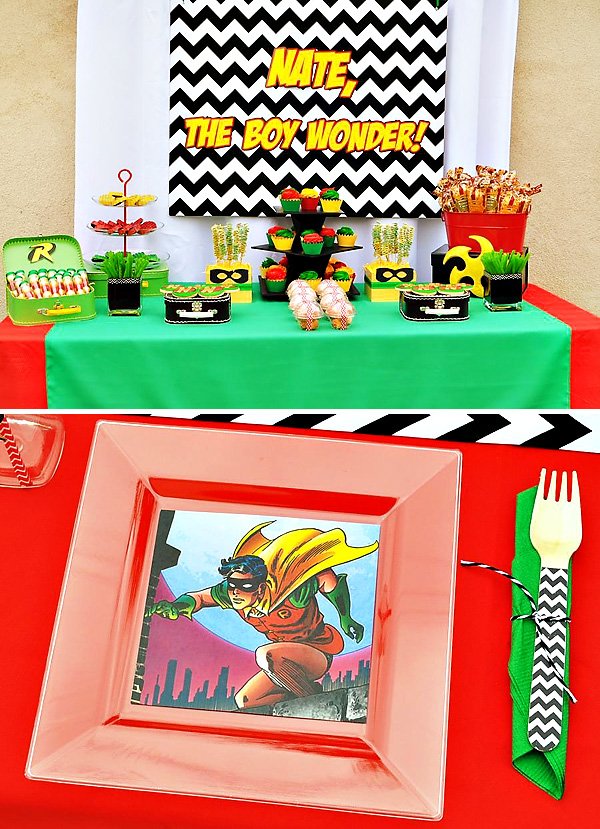 Every superhero needs a birthday party… especially when you’re Batman’s super sidekick! This Robin ,The Boy Wonder! Themed 4th Birthday Party by Jeannette of J. At Your Service is totally AWESOME! With cool costumes and amazing colorful treats like the Robin cake made by (talented friend) Silvia Morales, little Nate’s party was a SUPER day! ;) 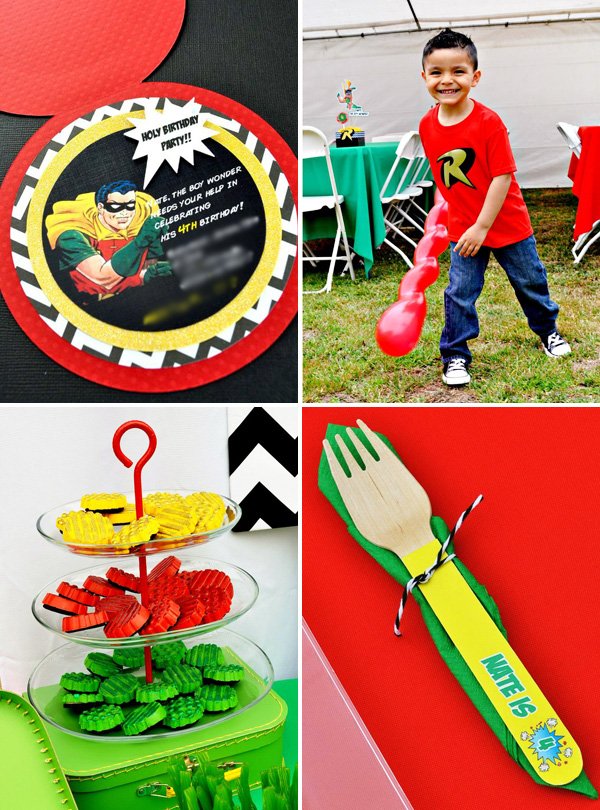 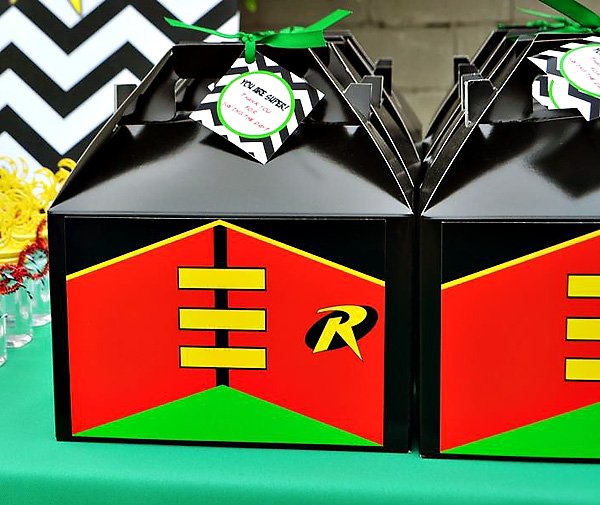 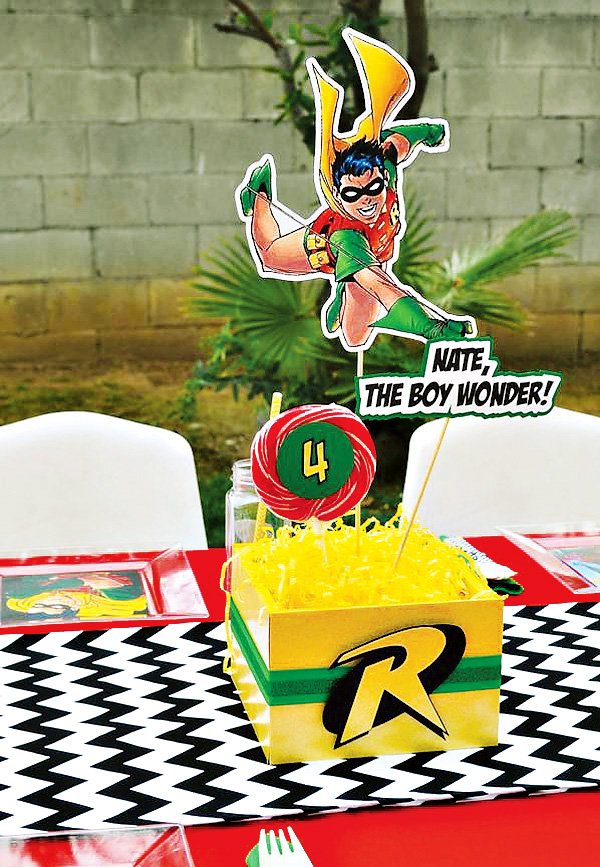 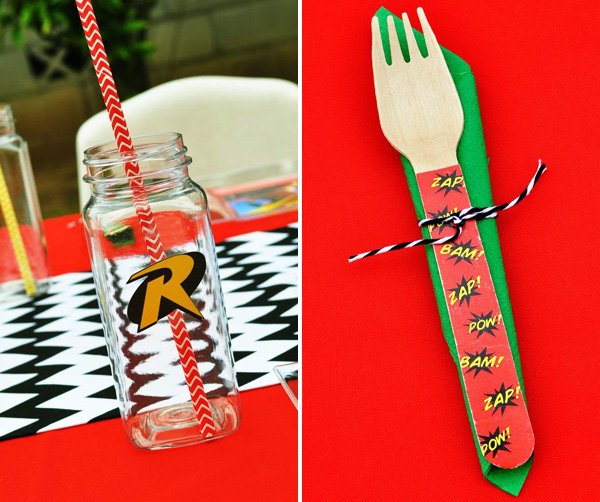 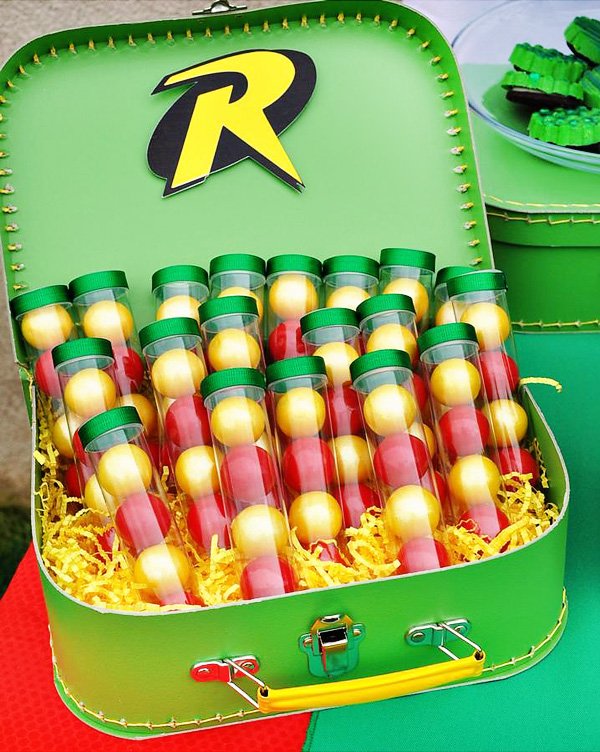 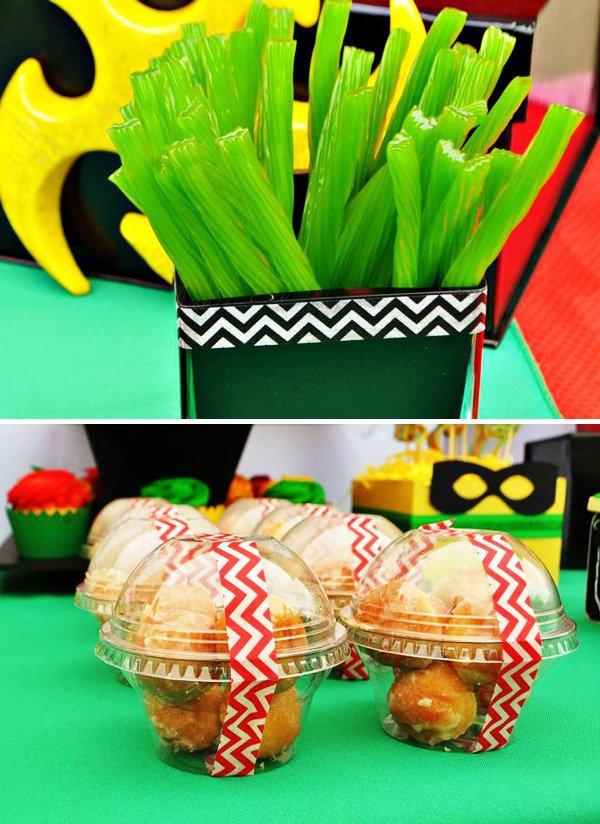 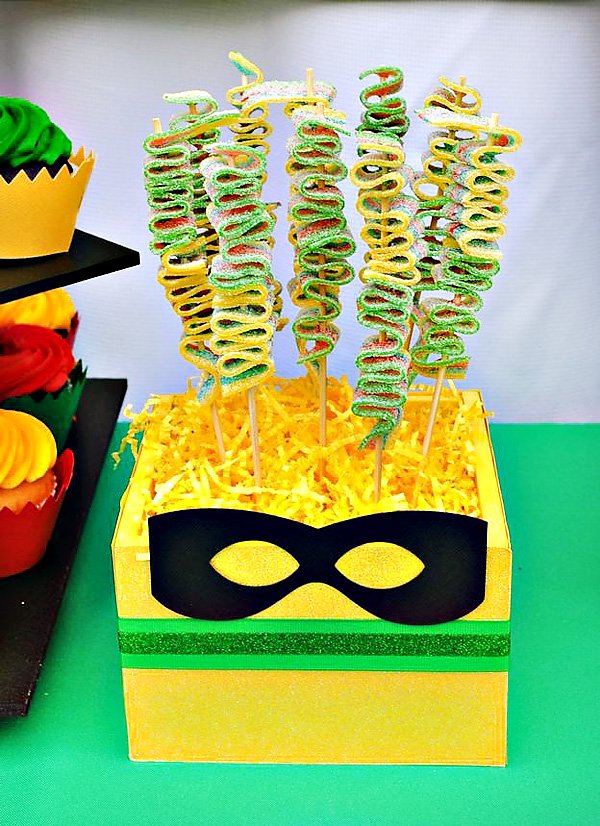 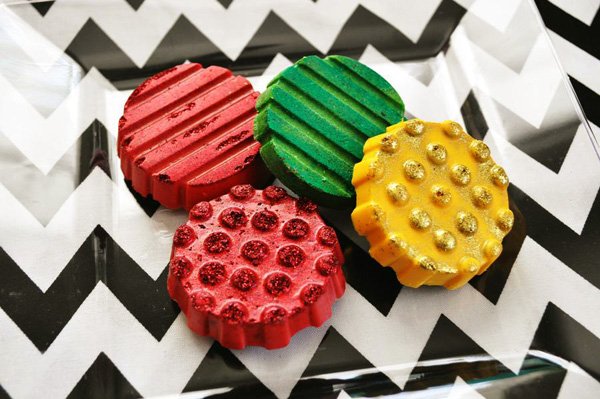 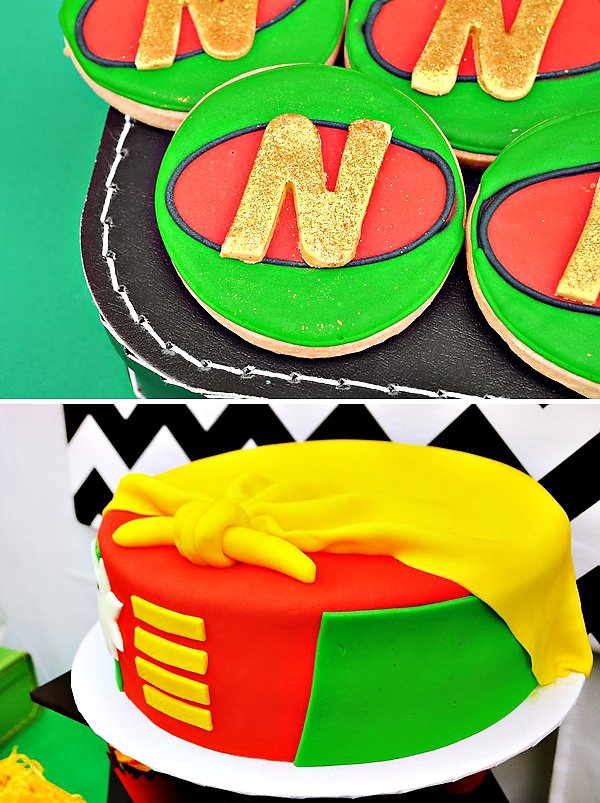 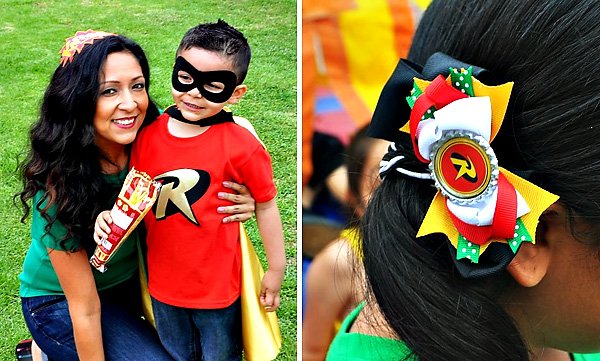 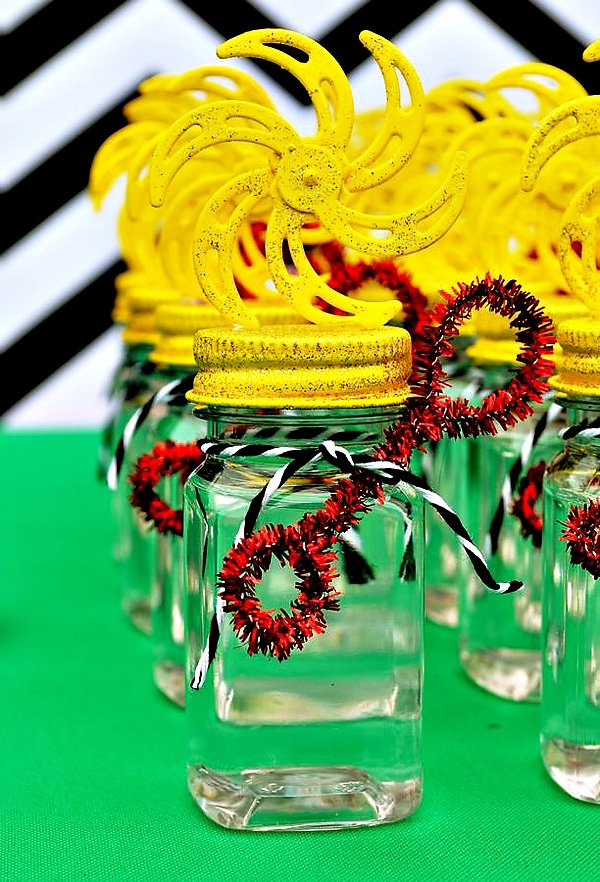 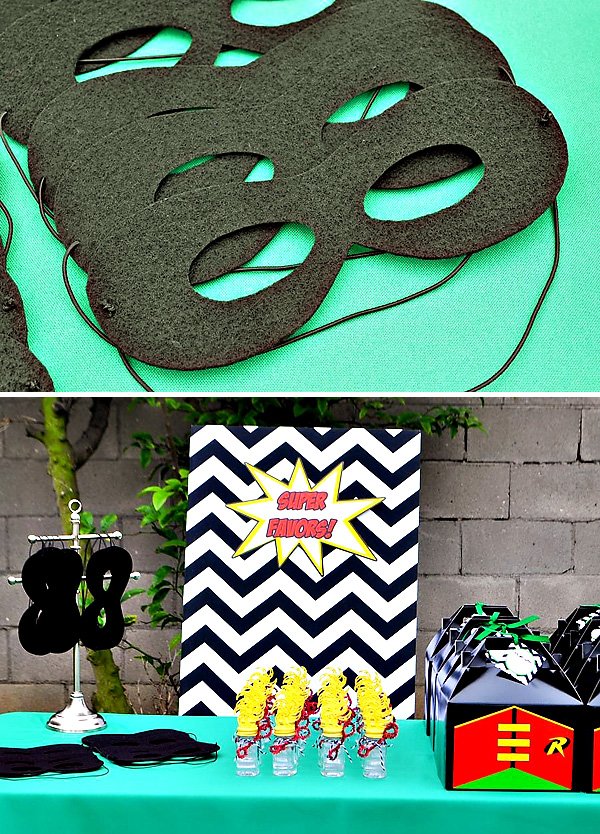 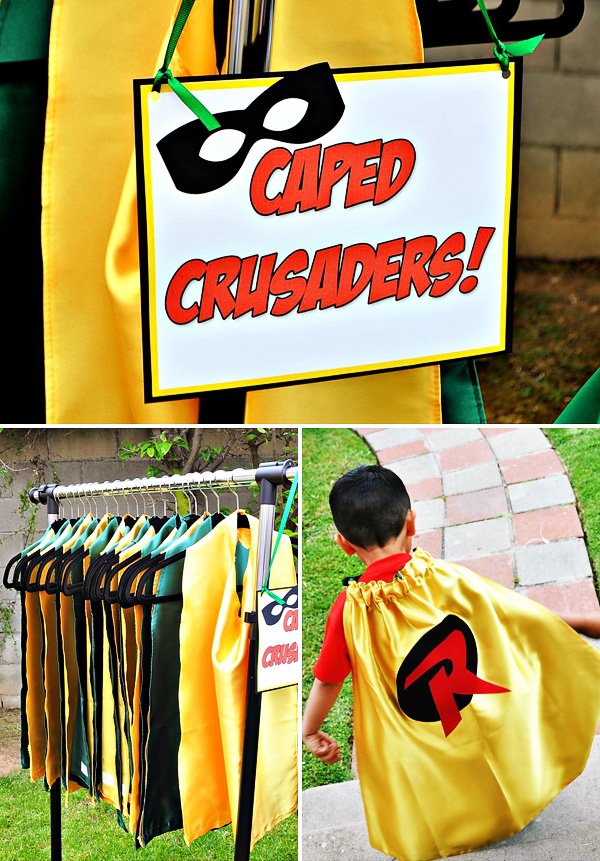 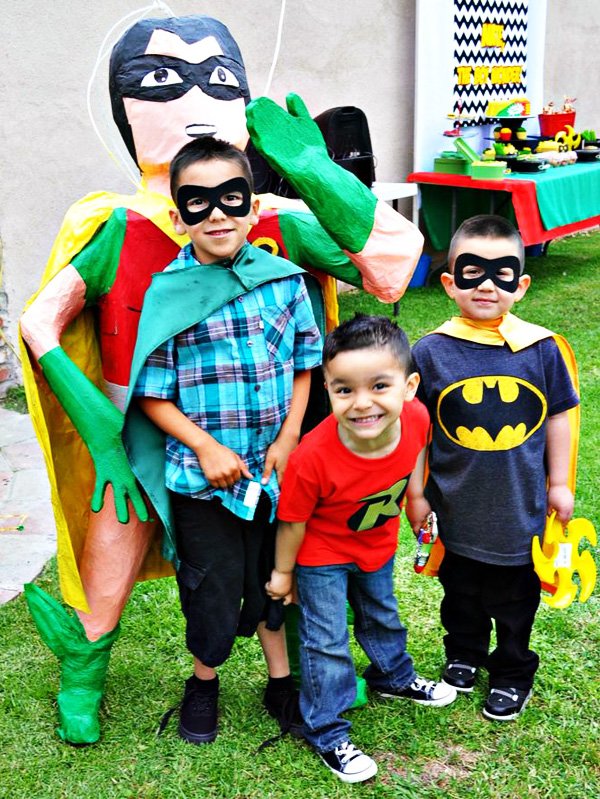 I recently planned a 4th birthday party for my son Nate. The theme he chose was Robin, the Boy Wonder. Of course that totally blew my mind, since the more popular character is Batman but he was so dead set on having a ‘Robin party’. Finding things for this party was NOT easy at all. I had to create everything and think really hard on how to bring him out. I decided to use the Robin colors (red, green and yellow), also black and white chevron for a pop of modern/funky patterns. I found some great vendors that accommodated my requests and worked up some major cuteness.

I designed the invitation and set the tone for the party in the process. Using red, green, yellow and chevron print.

My guest tables were decorated with yellow, red or green linens. The centerpieces were made with unfinished wood boxes purchased at Target, that I painted black. I wrapped each one with a chevron print ribbon as well. Each box had a Robin cut out, with a sign I created, saying “Nate, the Boy Wonder”. I also added a red swirl lollipop with a number 4 label on each.

The kiddie table was my favorite element! I made a chevron print table runner to go over a red linen with the same style centerpiece as the guest tables. I made these in a glittery yellow so they would be different from the rest. The place settings consisted of clear square plates that I added Robin images to the bottom of. Each setting had plastic french milk bottles and chevron straws, which I added a Robin logo to, along with fun superhero and chevron print wood forks.

FAVORS
I created a “Super Favors” sign to go over a chevron print wall art piece. I displayed black gable boxes, with labels I created, resembling Robins suit, then adding thank you tags to each. The gable boxes contained snacks (chips, cookies and crackers), as well as a toy superhero glider, superhero theme wrist bands and crayons with chevron labels I made for them. I also laid out black eye masks and mini bubble jars. I spray painted tiny toy spinning tops, as well as the lids of each bottle with yellow and gold. I attached each spinning top upright to resemble birdarang weapons and made red pipe cleaner wands. There was also a clothing rack, where I hung green and yellow satin capes for each little superhero.

DESSERT TABLE
The back drop was a foam board covered with a black and white chevron fabric. The letters reading “Nate, The Boy Wonder” I created, print and cut, then pasted on the chevron covered board. I had a spread of all my sons favorites! Candy tubes with red and yellow gumballs, rainbow sour belt skewers, Krispy Kreme donut hole cups (sealed with a red and white chevron washi tape) and green apple licorice. We had cupcakes, glittery chocolate covered oreos in red, green and yellow (by Cookies Sweet Treats), as well as custom cookies (by Roni’s Sugar Creations) with a similar Robin logo look but with an “N” letter instead. I also added small Popcornopolis bags. The Robin themed cake was made by my uber talented friend, Silvia Morales.

COSTUMES
My son wore a Robin logo shirt, custom made by Tini Posh and a gorgeous cape by Frogs, Snails & Puppy Dog Tails. My daughter had an adorable hair bow by 3 Piggy Tails Boutique. My amazing friend DeAnna of Pink Laundry Events also helped me fit in with the theme, with a SUPER cool “KAPOW” headband.