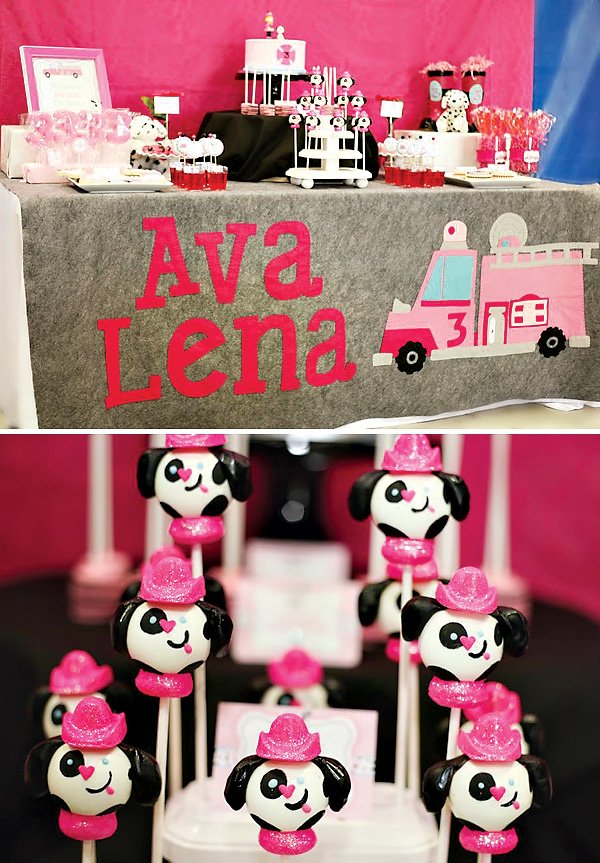 It’s 3 Alarms for Ava! This Girly & Pink Fire Truck Party is decked out in Dalmations, Pink Firegirls and the prettiest firetrucks around! Christie Skerski of Flaired Affairs designed this glammed up tomboy themed bash for her special birthday girl with a wonderful group of vendors including Dyal Photography, Swish Designs and more! 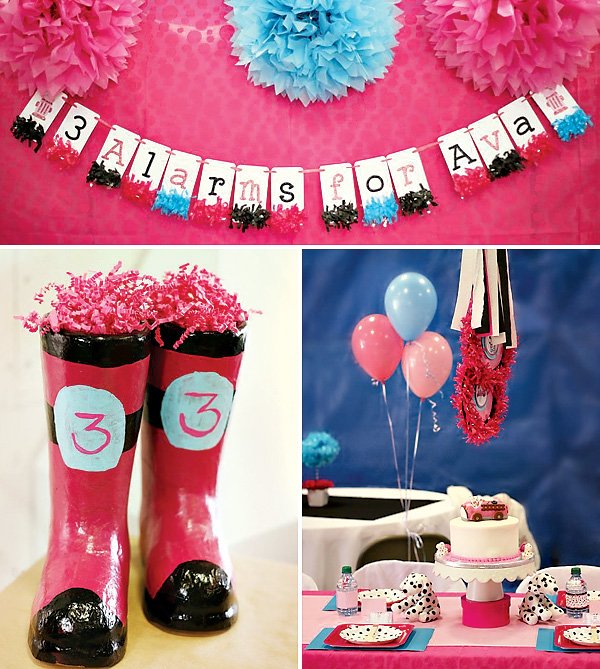 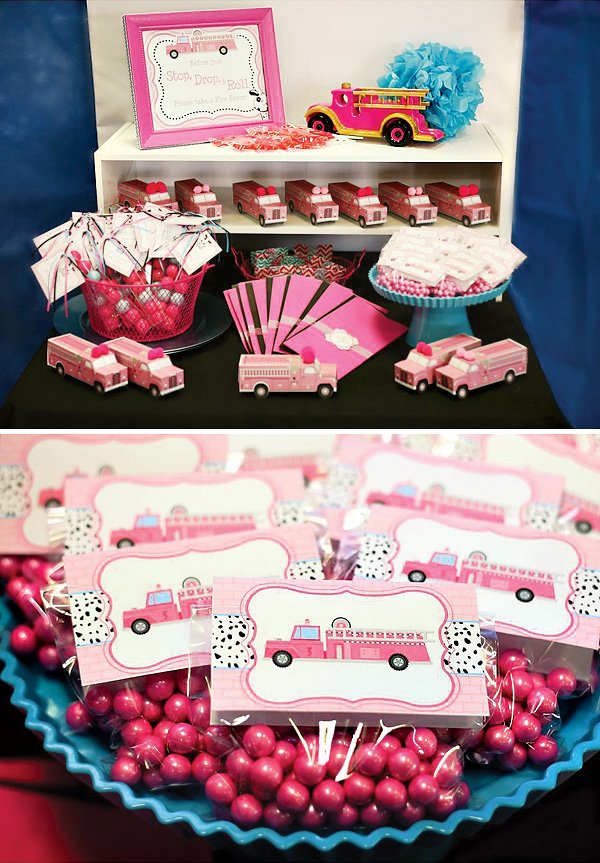 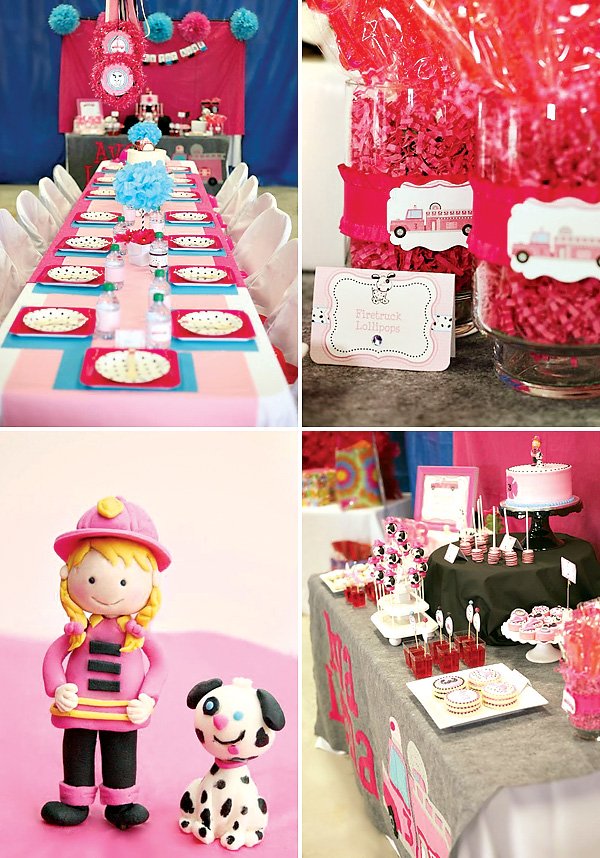 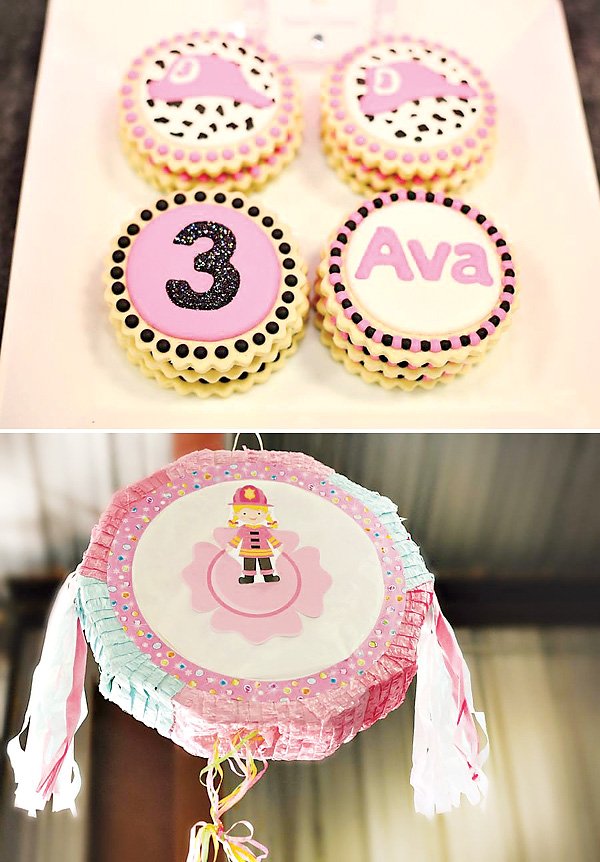 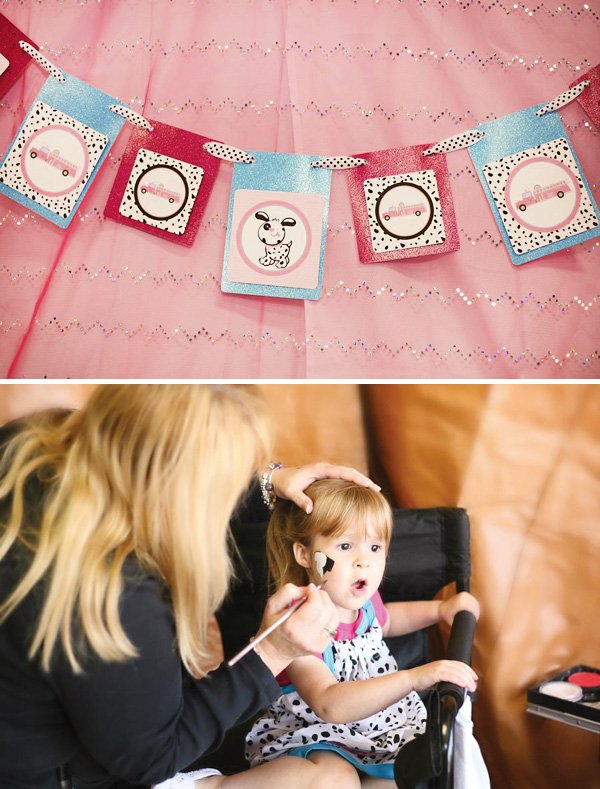 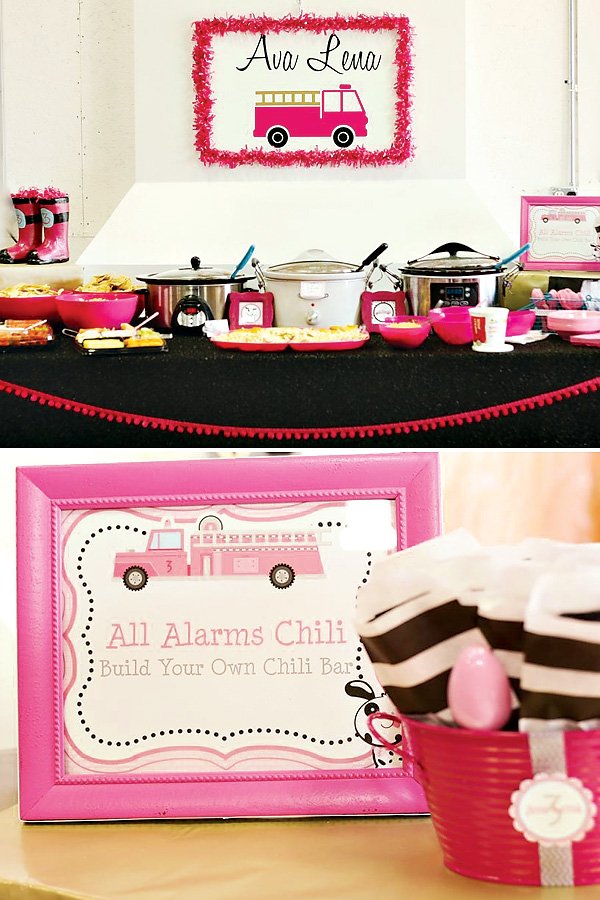 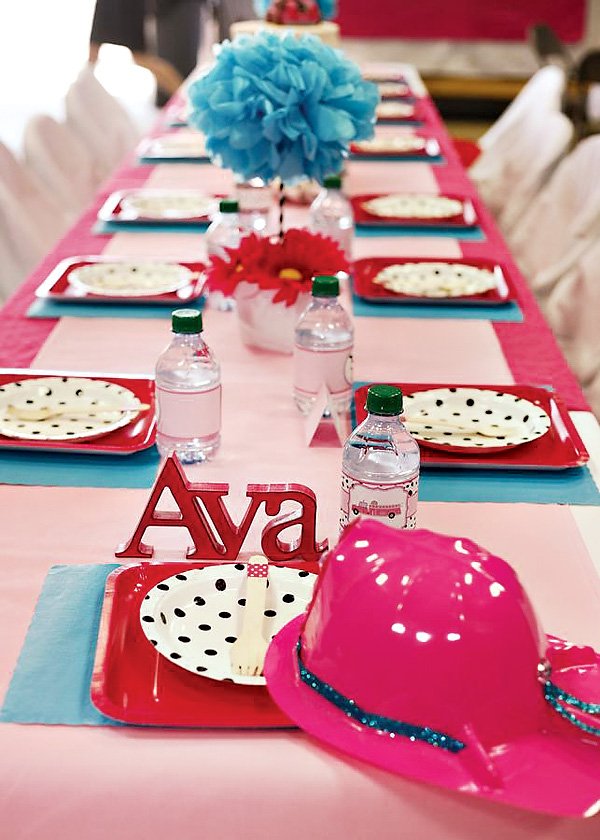 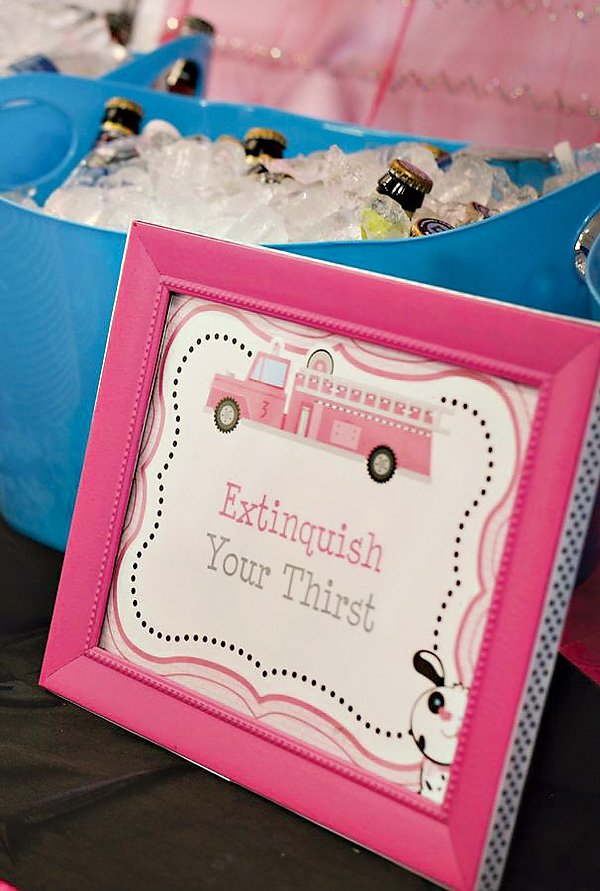 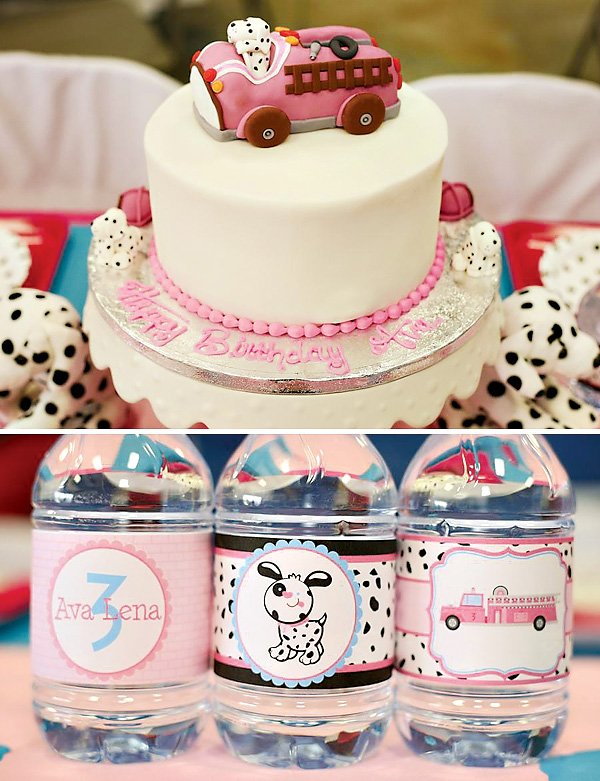 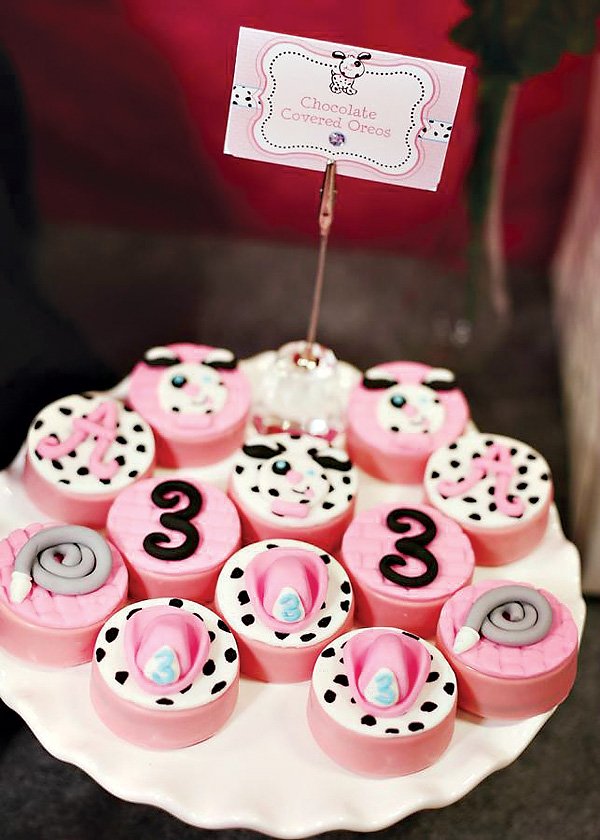 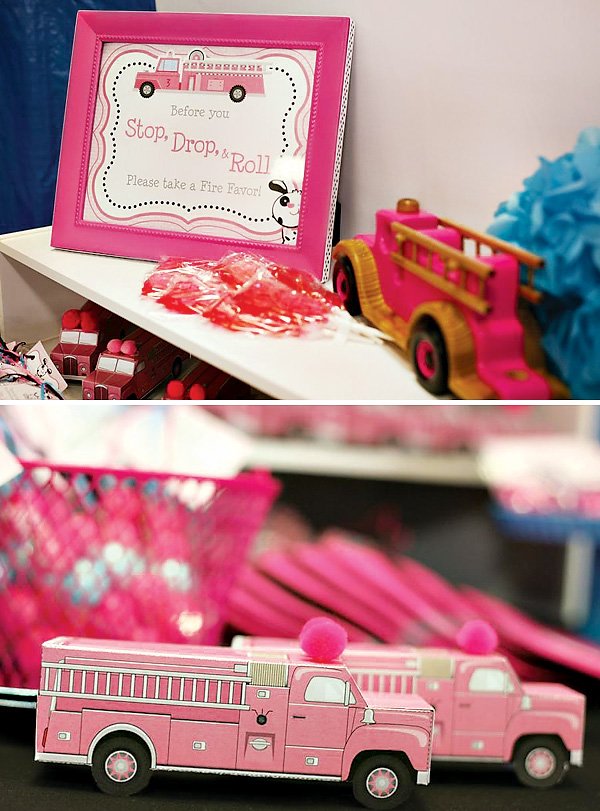 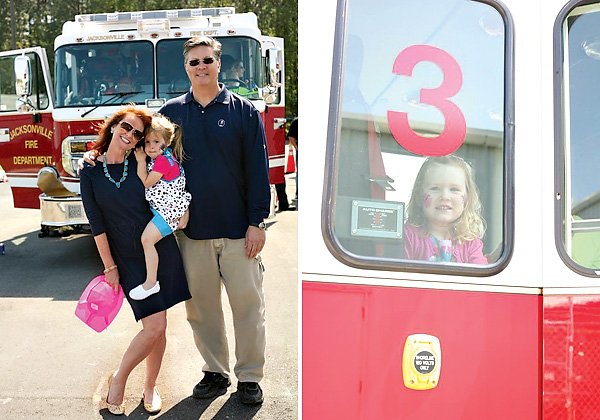 PARTY DETAILS, as told by Christie…

INSPIRATION
The inspiration was quite easy: my daughter Ava became obsessed with fire trucks over the past few months. As in stalker obsession. We do fire station drive-bys looking for those beautiful shiny trucks sunning themselves outside. Not going to lie, my town does have some really adorable firefighters, so that is always a bonus for Mommy ;) I kid.. I kid…. Seriously, of course, as I did my research on these parties – there was a blaringly obvious ‘flaw’ in my execution here – Every. Single. Party. was really designed for and focused on little boys. The flames, the bright red everything, the coats, even the sweets were really geared towards boys.. so what that really meant for me was having to have everything truly custom created for all things fire truck related. My daughter is a little Diva – it had to sparkle and frill.. and still be cute. So Pink had to be the color and cute puppies had to show up..

DECOR
THIS is where the fun for me really began.. everything made was custom starting with the graphic design. Donna of Swish Printables hit it out of the park again for me. As soon as I told her the theme and its twist, I know I heard her squeak with delight.. and she had a blast. Goodbye to the red, orange and yellow and HELLO Pink, Teal and Black! With lots of glitter and bling! Now, that makes a girly fire truck and dalmatians party! One of my favorite elements of the party, ok well, there were a few favorites – was the tabledrop created by Linckids.. It was so personal and one of the things that made it truly just Ava’s.. Also, a special place is her 3 Alarms for Ava banner by Kristy at The Purple Pug… these two things made it the most personal for my little girl. But it doesn’t end there for sure!

FOOD/DRINKS/DESSERTS/CANDY
Ok, I had 2 cakes. Yes.. because I had two cake toppers – so I needed 2 cakes. I always get the best cakes my town has to offer over at American Dream Cakes. Although I’m not going to lie, I had a favorite of the two toppers – Rachel with Fondant Flinger rocked it when it came to making a likeness of my baby dressed in her pink fire jacket! And the little trusty dalmatian side kick had me squealing with giddyness when I opened the box. I still get light headed when I look at it. Did I mention that I had to work the imagination center of my brain into overtime? Well, I did but these crazy visions would not come to life it weren’t for the most fabulous creators of so many of the sweets on the table. The spread of goodies made it difficult to eat because they were just oo adorbs.. Kudos for ridiculously awesome Chocolate covered Oreos of fire hats, dalmatians and fire hoses by Love & Sugar Kisses, sugar cookies of insane deliciousness by the always fab Sweet Goosie Girl and The Cookie Jar, the ultimate crazy cake pops ever by The Sweet Tooth Bar and the most fabulously, firery french macarons from the always sweet EarthandSugar…. chocolate covered marshmallows, chocolate suckers and lollipops were part of the sugar feast,too.

PARTY FAVORS
Bacon-flavored firetruck favor boxes made by Piggy Bank Parties were too cute for words..Of course, Ava had to put her spin on the sirens by using hot pink poms instead of the more realistic ones I was supposed to. Since it was her birthday party first (and my party to style second), she won out.. Goodies bags were available to fill up on the ever addicting Sixlets, lollipops and Thank You gumball tubes before they were to Stop, Drop & Roll on home..

PARTY ACTIVITIES
All the kiddos had fun with the face painting, classic pinata, over sized slider bouncy house and pin the tail on the dalmatian but it was the visit of a shiny and beautiful fire truck that hailed from Firehouse Station #3 pulling right up to the event site that was the highlight for every  guest (and their parents!). Everyone except for the Birthday Girl – HA! She absolutely refused to go near it – was happy from a distance. Really? Yes, really. And that was ok.. She and Mommy will just continue to obsessively stalk via drive-bys and look for the sunning fire trucks and squeal with unbridled enthusiasm like its the first time we’ve ever seen one when we catch them outside.

Because, frankly, it won’t be long before she will be old enough to drive one, so I’ll take it.