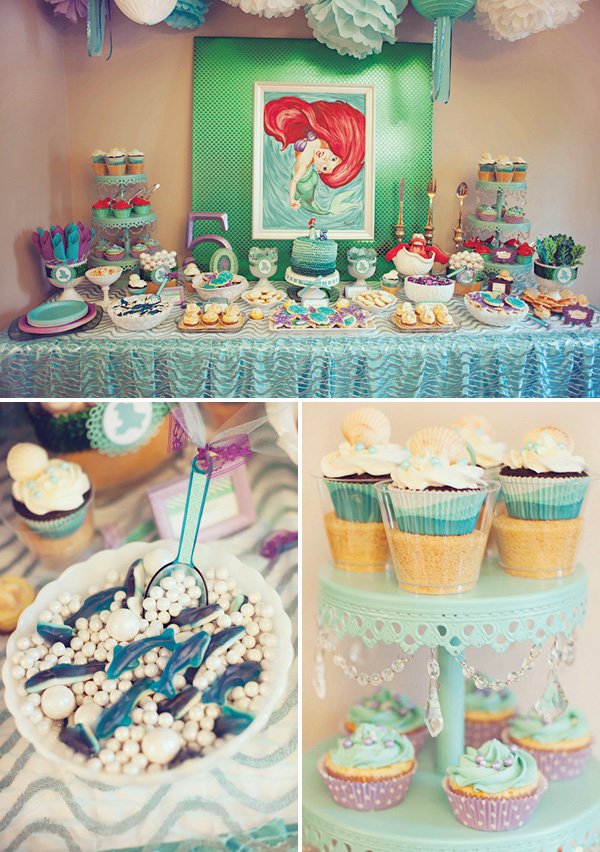 Under the Sea parties will always be popular and I will never get tired of looking at all of the shimmering details & creative ideas ‘down where it’s wetter!’ Beverley Piacente used her amazing talents to create this Ariel Themed Little Mermaid Birthday Party for her little girl. Believe it or not, Beverley DIYed ALL of the decor — painting, sewing and crafting every last detail! She even hand painted the iconic shot of Ariel behind the dessert table — simply amazing! 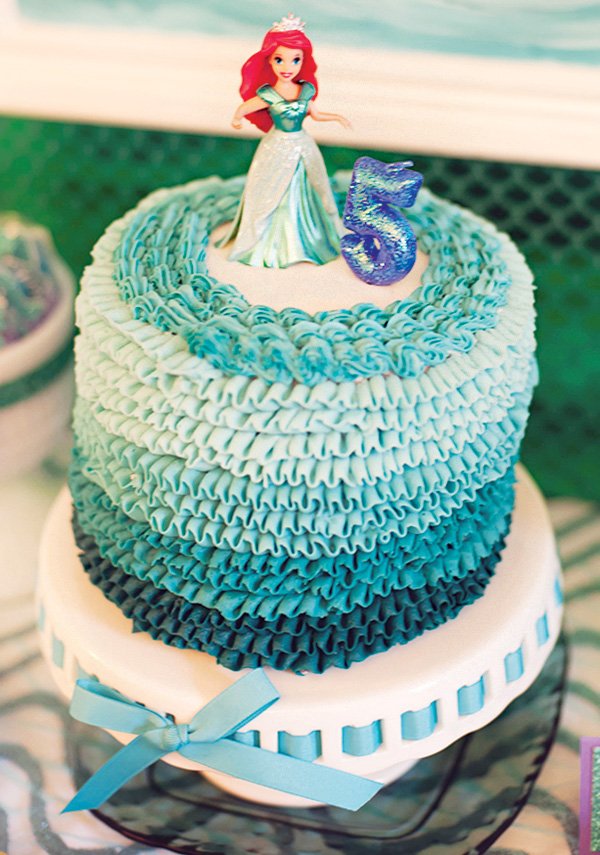 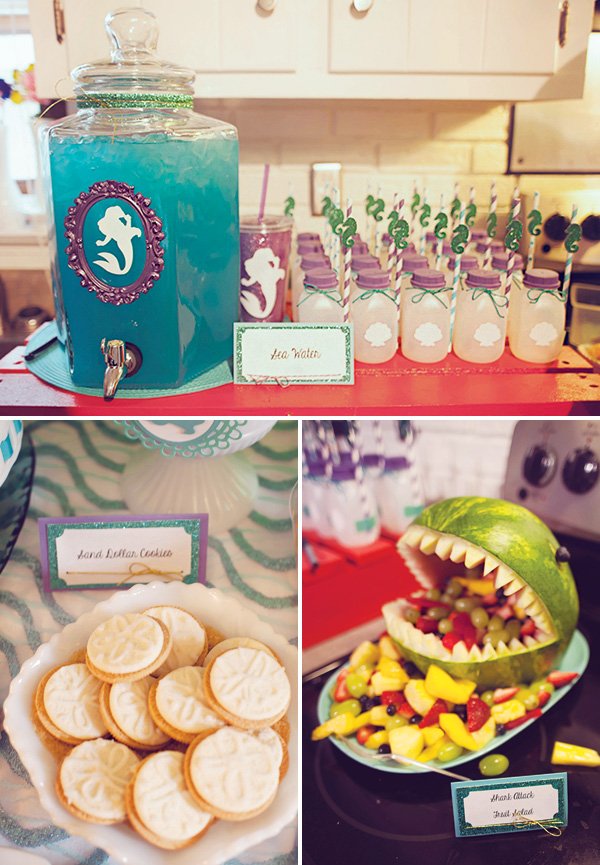 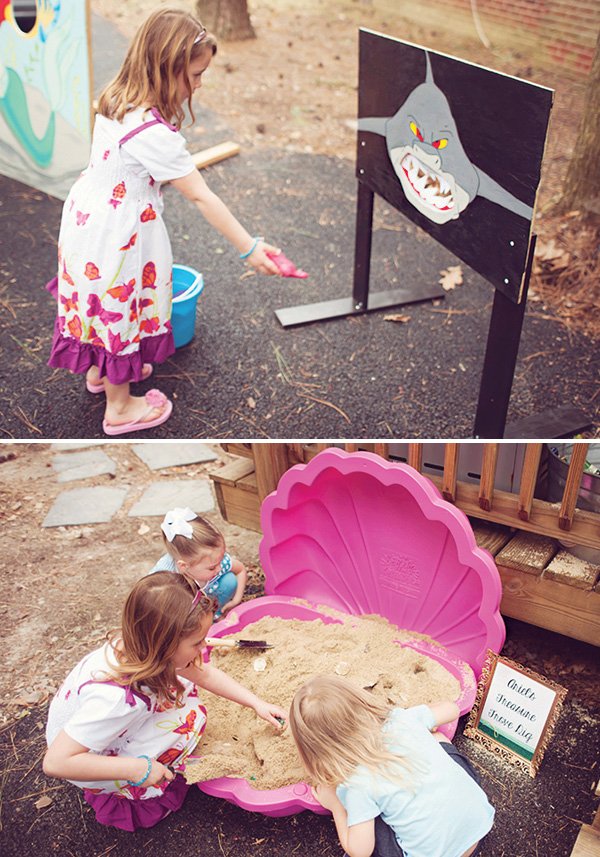 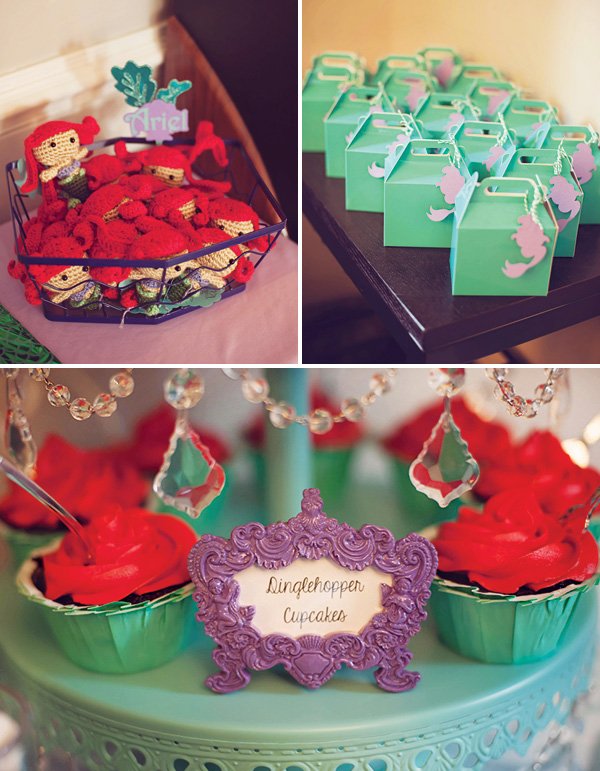 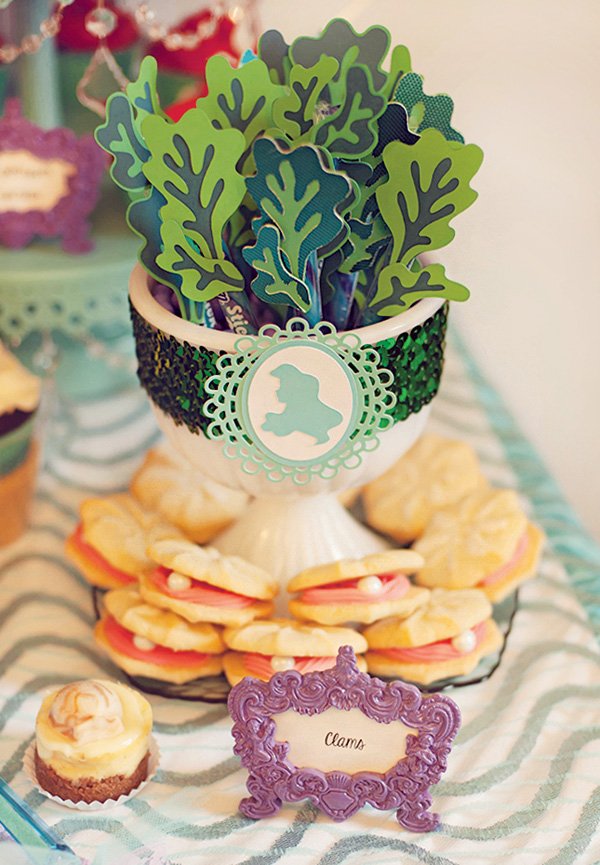 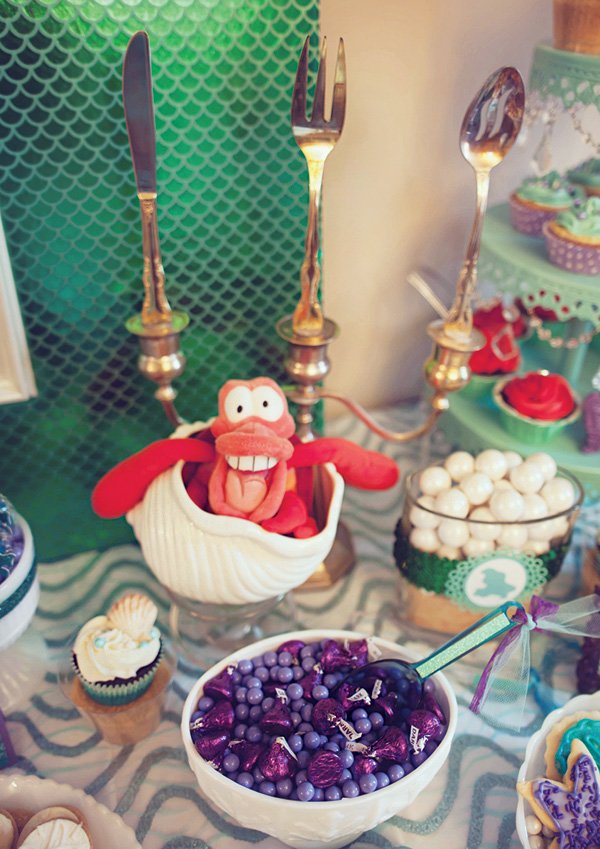 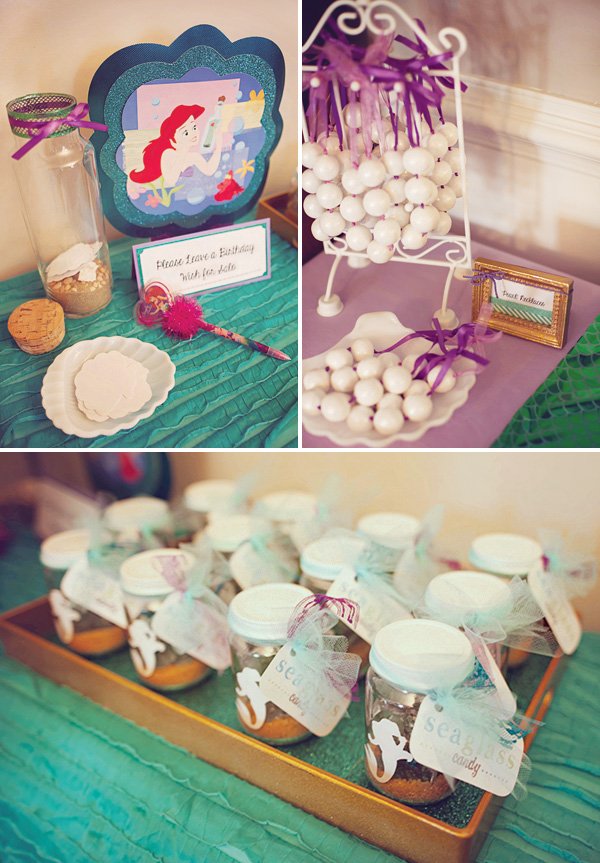 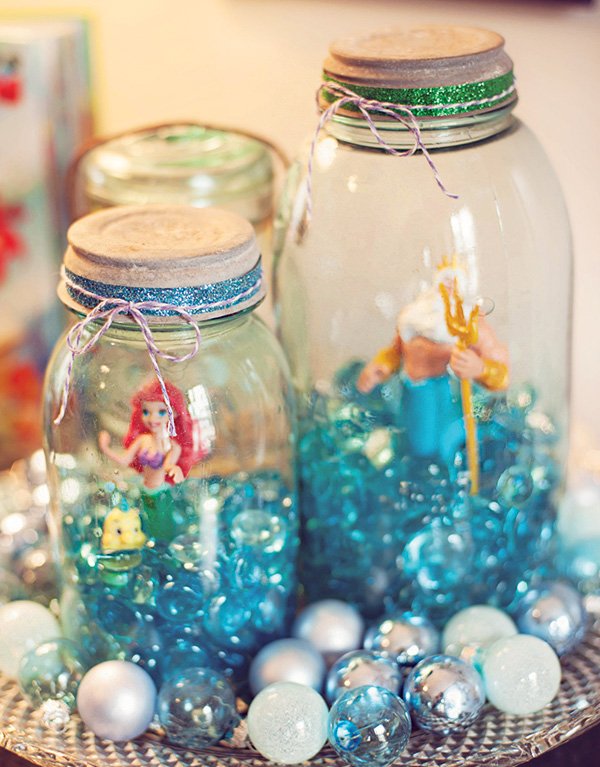 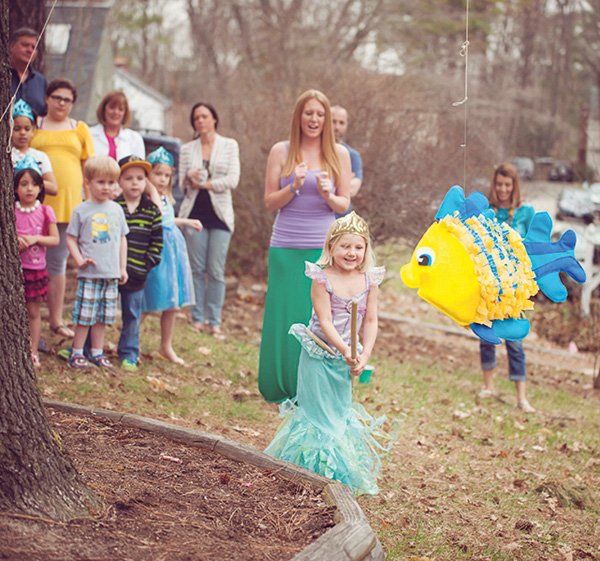 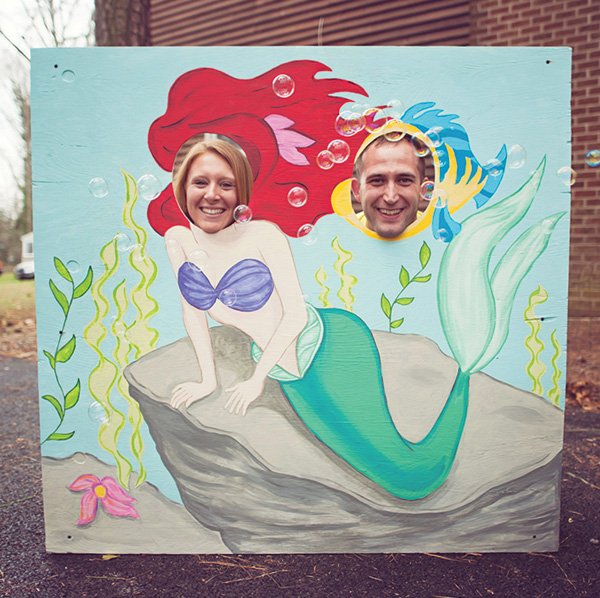 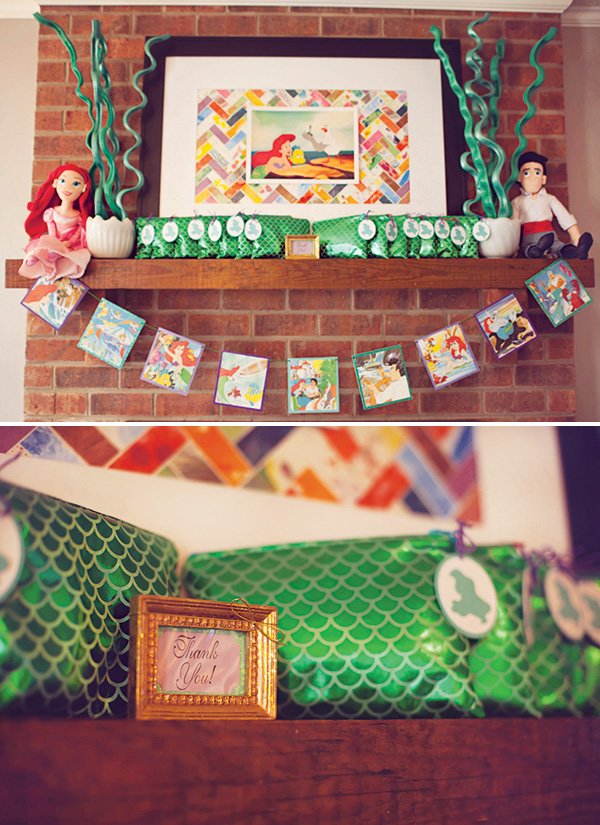 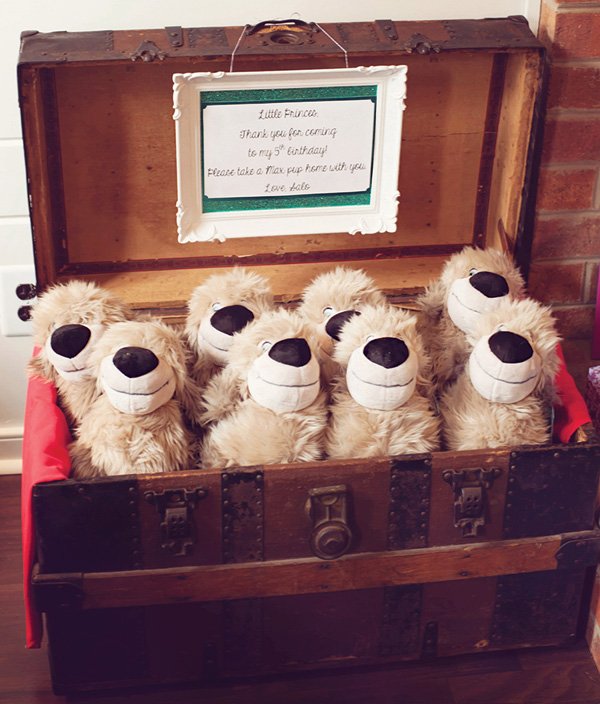 PARTY DETAILS as told by Beverley…

For my daughter’s fifth birthday, she requested an Ariel themed party. I’ve seen several others, but wanted to show off more of the deeper teal, emerald, red & purple colors for this event.

For the dessert table, I hand painted an Ariel portrait hung on a mermaid scale fabric board and hung poms and lanterns in shades of teal, white and purple. I sewed the satin table skirt and purchased some yardage of a wavy blue lace to throw on top and give it an extra touch. There were cupcakes iced in red with mini forks in them (“Dinglehopper Cupcakes”) and cupcakes that were sea themed and placed in clear cups filled with raw sugar to look like sand. Also on the desert table were “By the Beach” mini cheesecakes, “Sand Dollar” Oreos, “Clam” cookies and sugar cookies that I made & iced that were shell and starfish shaped. The more savory food was set up in my kitchen. For example, the shark themed watermelon fruit salad, crab dip & “shell” pasta.

The Favors
Boys were given plush stuffed animals from the Disney Store (Max, Prince Eric’s dog) and girls were given zip pouches stuffed with manicure kits (sewn by me) and crochet Ariel dolls (made by my friend who also did the photography for the event). Also passed out at the party were bags and jars of “seaglass” candy, gumball pearl necklaces (painfully made by me – ha!) and aqua sequin tiaras.

The Activities
A flounder piñata (made by me) & a large wooden cut out, painted by myself with Ariel and Flounder on it, which the kids AND adults had a blast taking their pictures with it! A shark toss game (also made by me), “Ariel’s Treasure Trove Dig” and coloring pages were some of the other activities we had at the party.

I used my cricut machine to make a lot of the party details, included the Ariel silhouettes found on most items. I was also excited to use most of my vintage milk glass collection to display food and treats in. There are so many other details, but I think these were most of
my favorites.