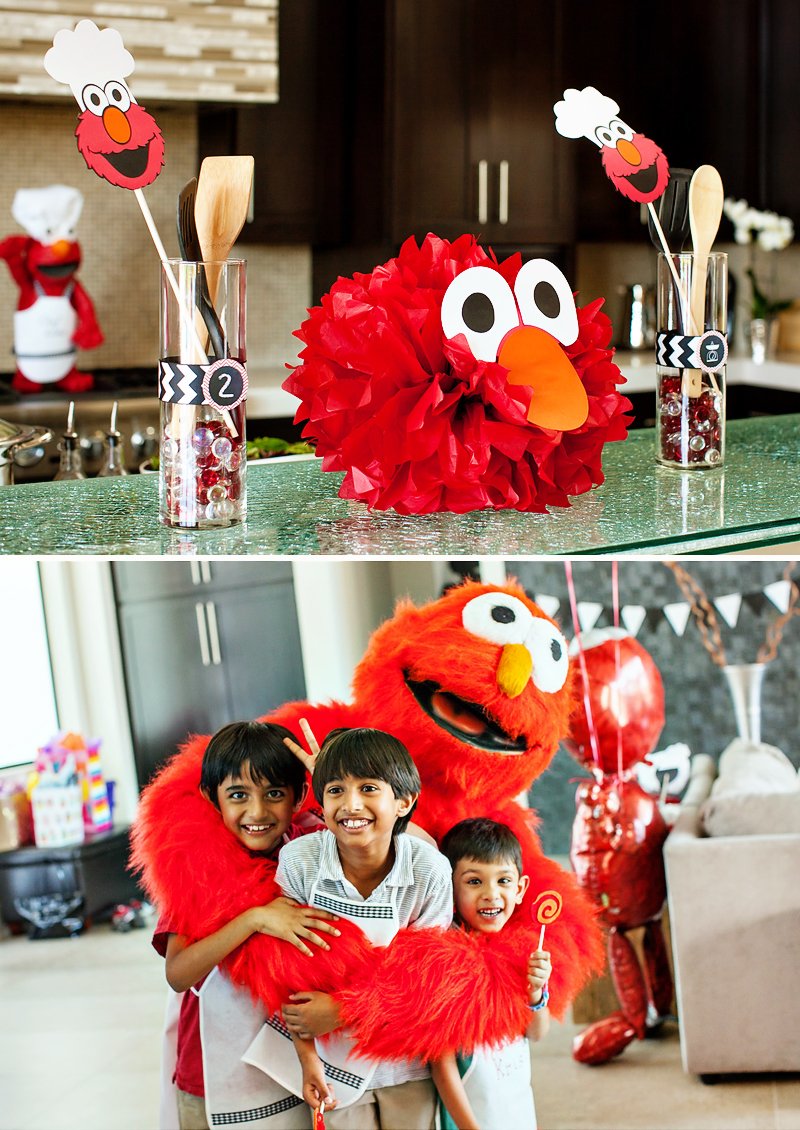 Welcome to Aashi’s World! Filled with pizza, groceries, cookies and more, Smita Bhakta of The Party Wall designed a “Chef Elmo” Play Kitchen Inspired Birthday Party, that is napkins-out AMAZING! The birthday girl’s love for make-believe games and her favorite Sesame Street character cooked up to be a playful afternoon for budding chefs and hungry guests. Enjoy browsing through all the yummy photos from Kathie Tam – they’re so cute I want to eat them all up! Ha! 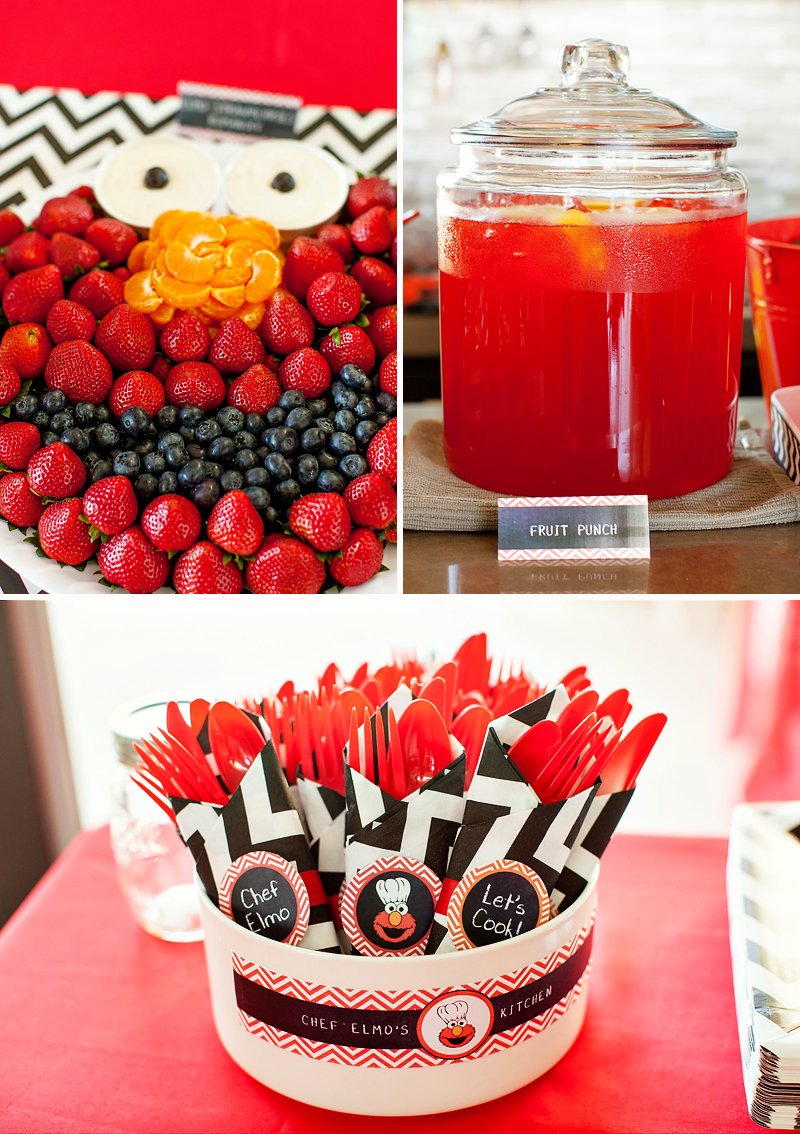 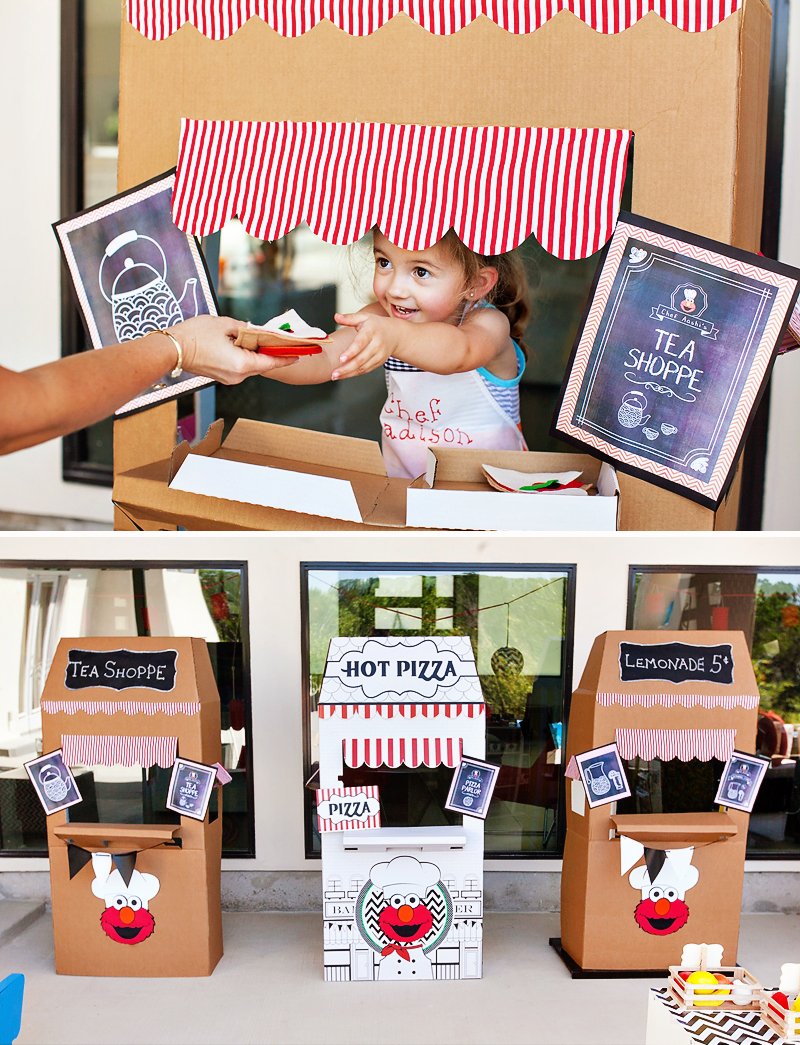 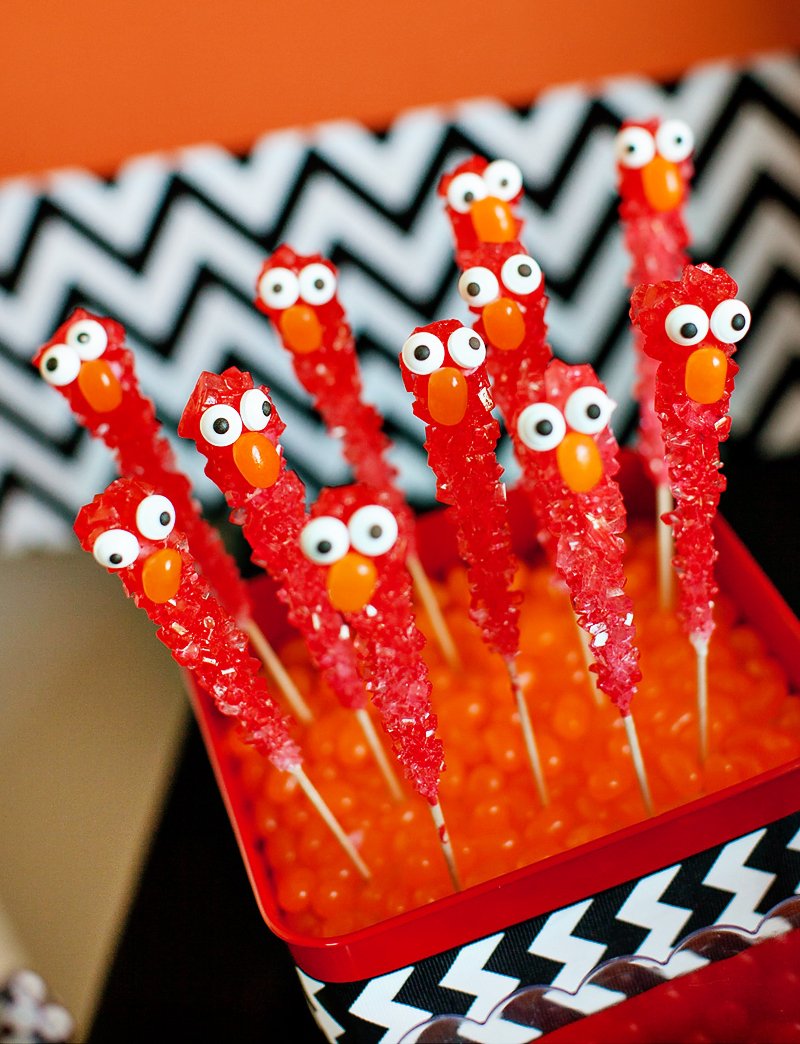 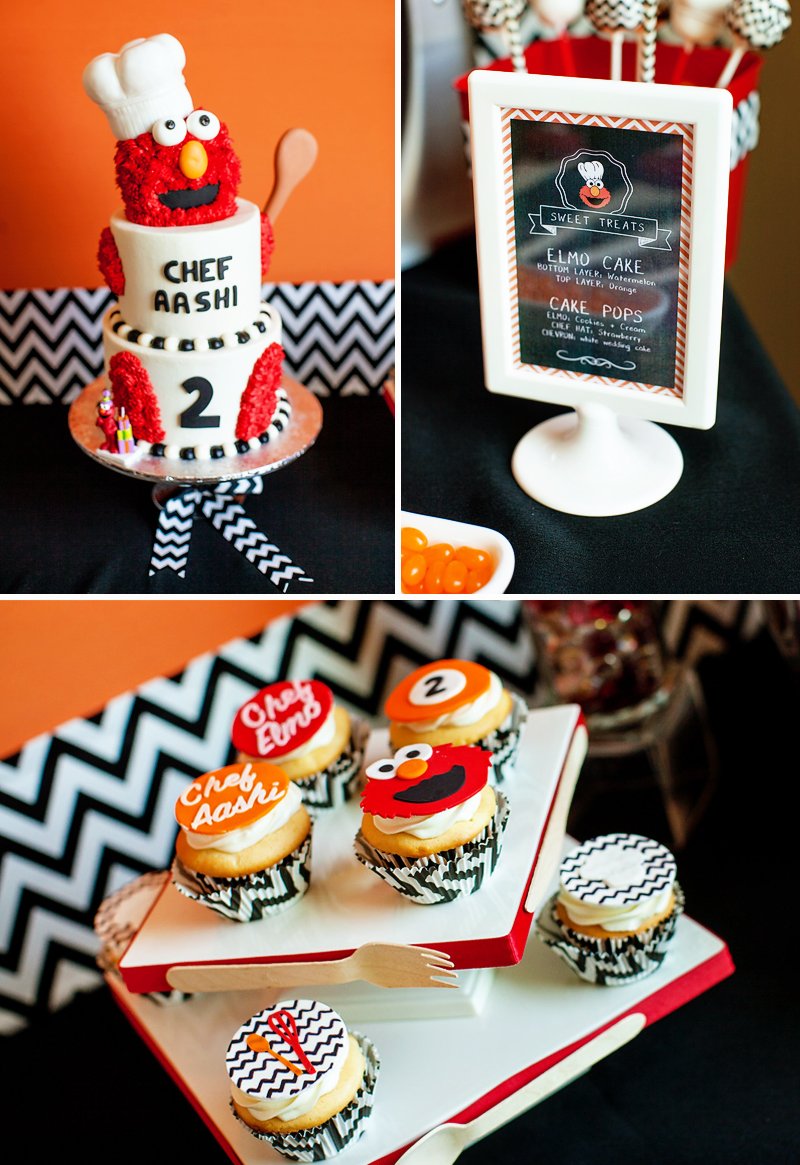 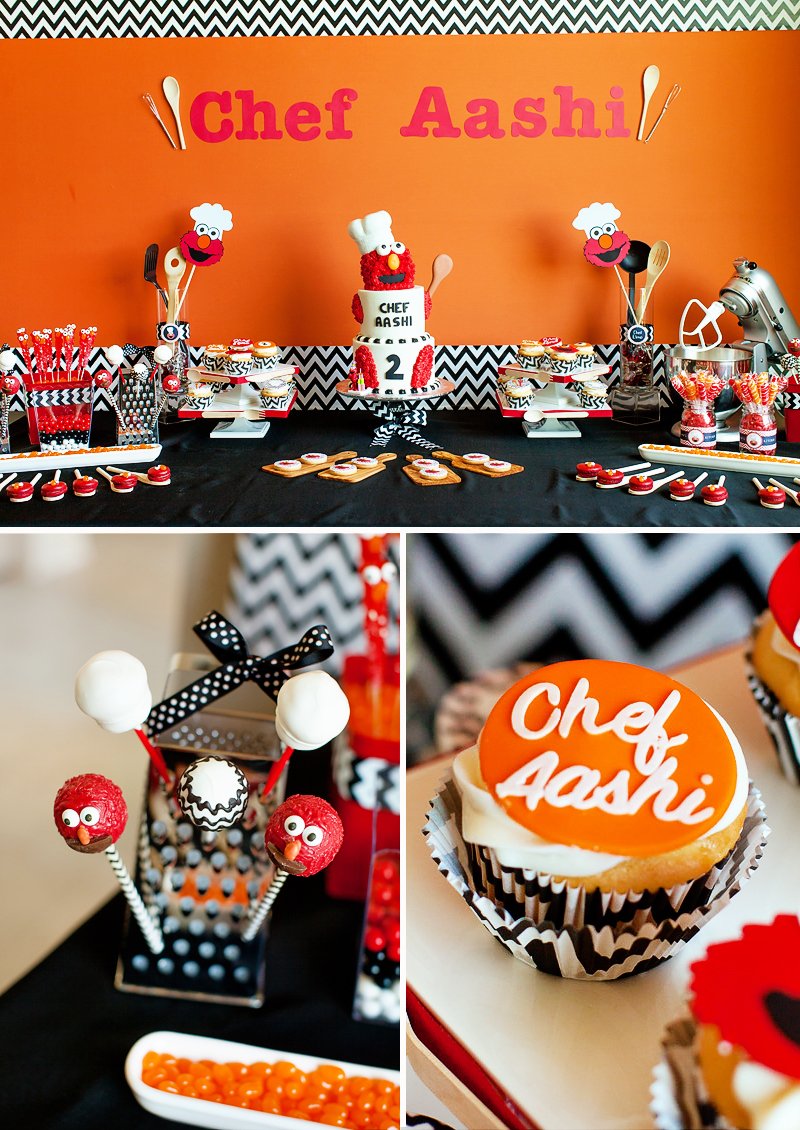 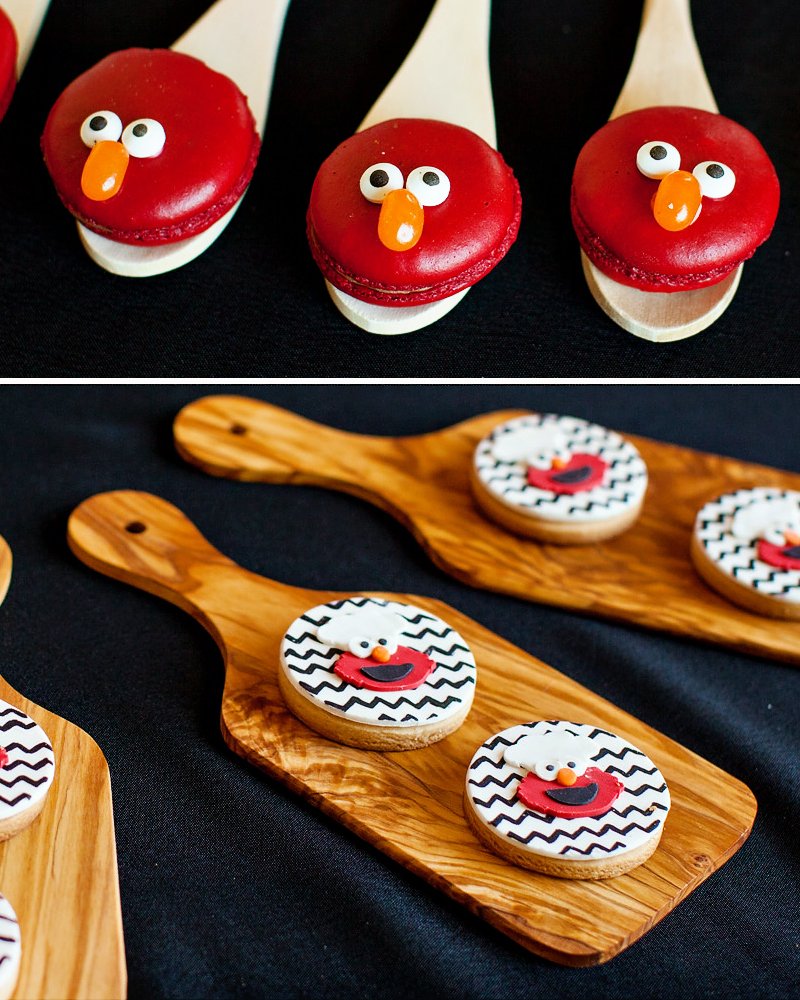 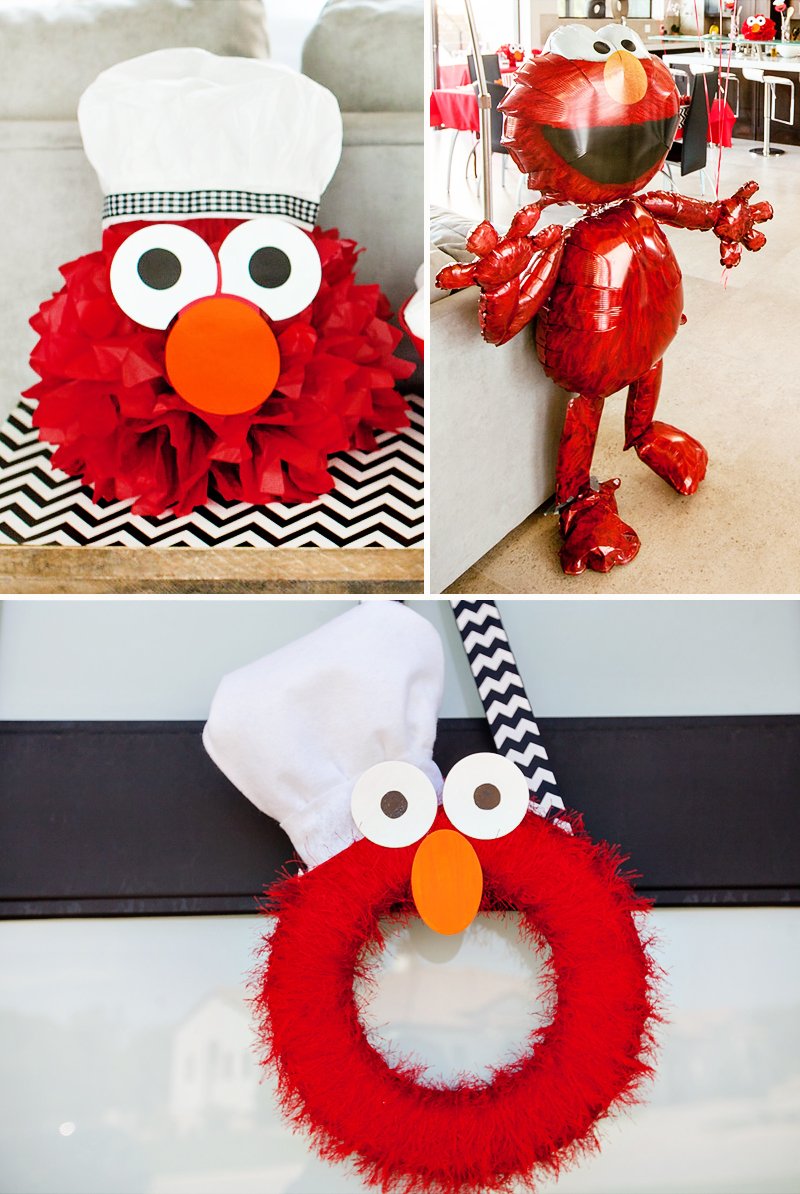 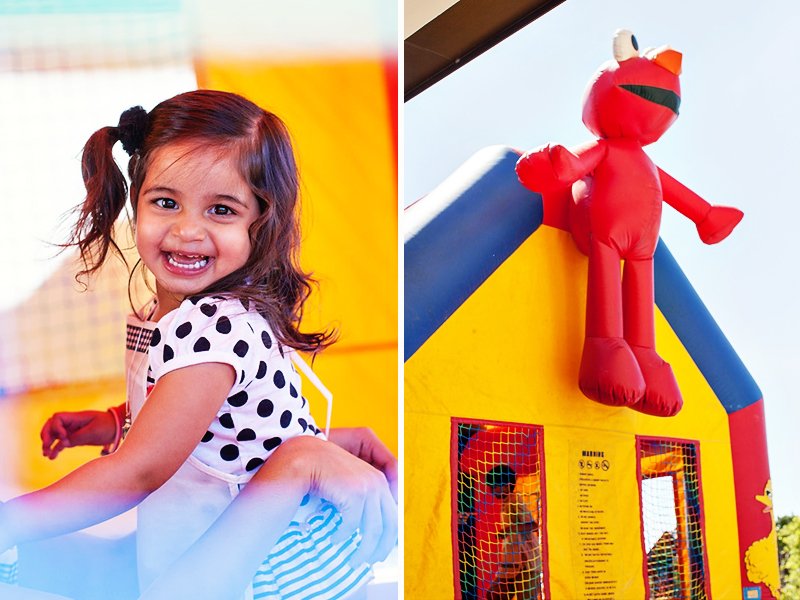 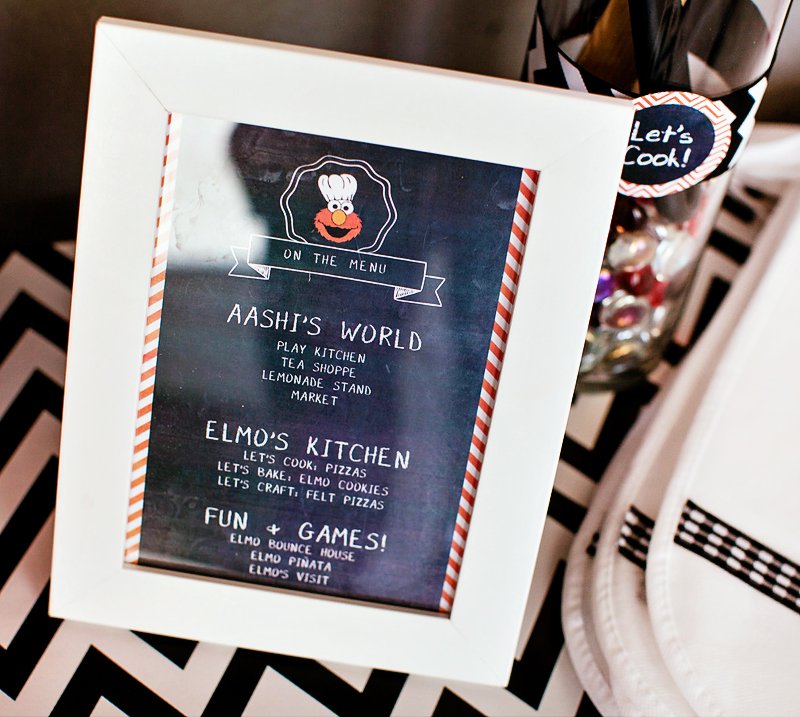 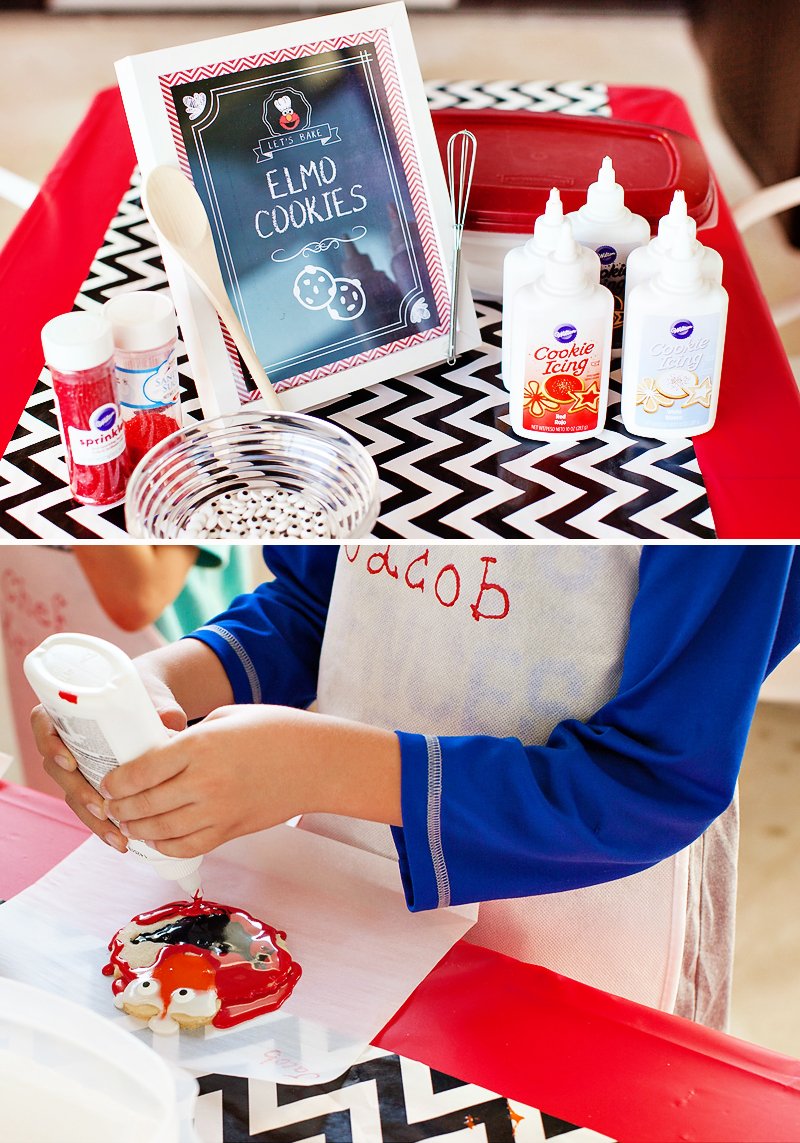 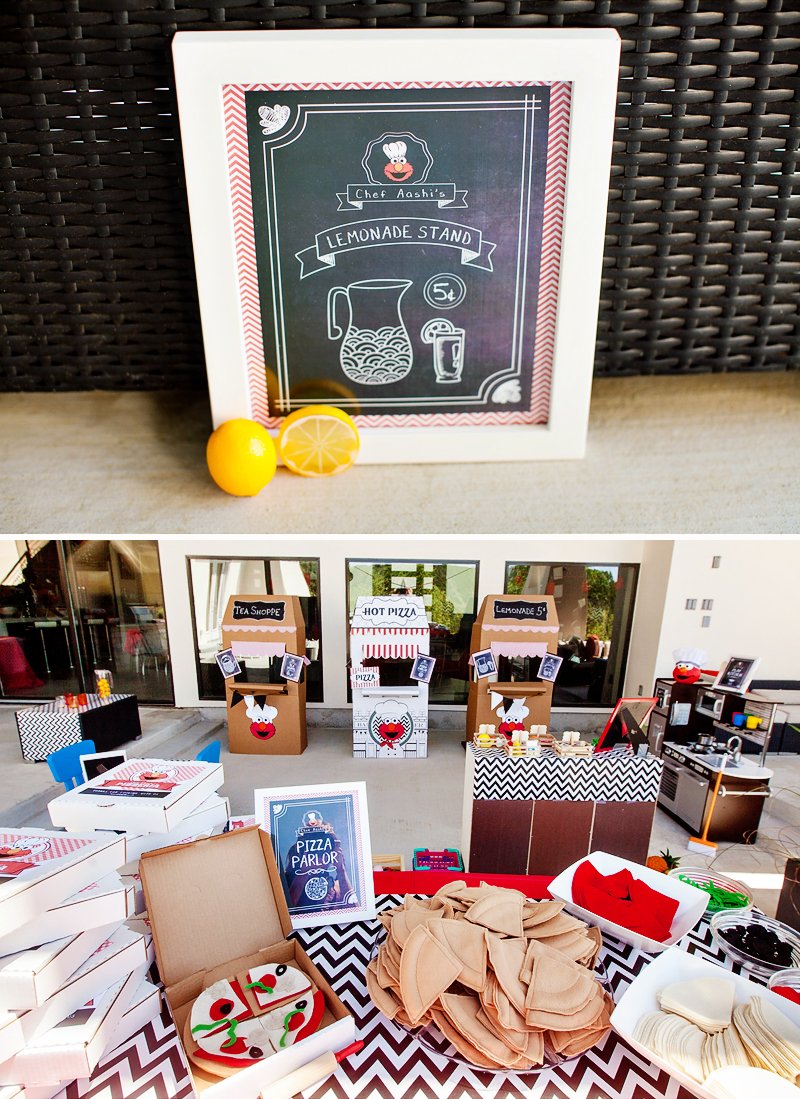 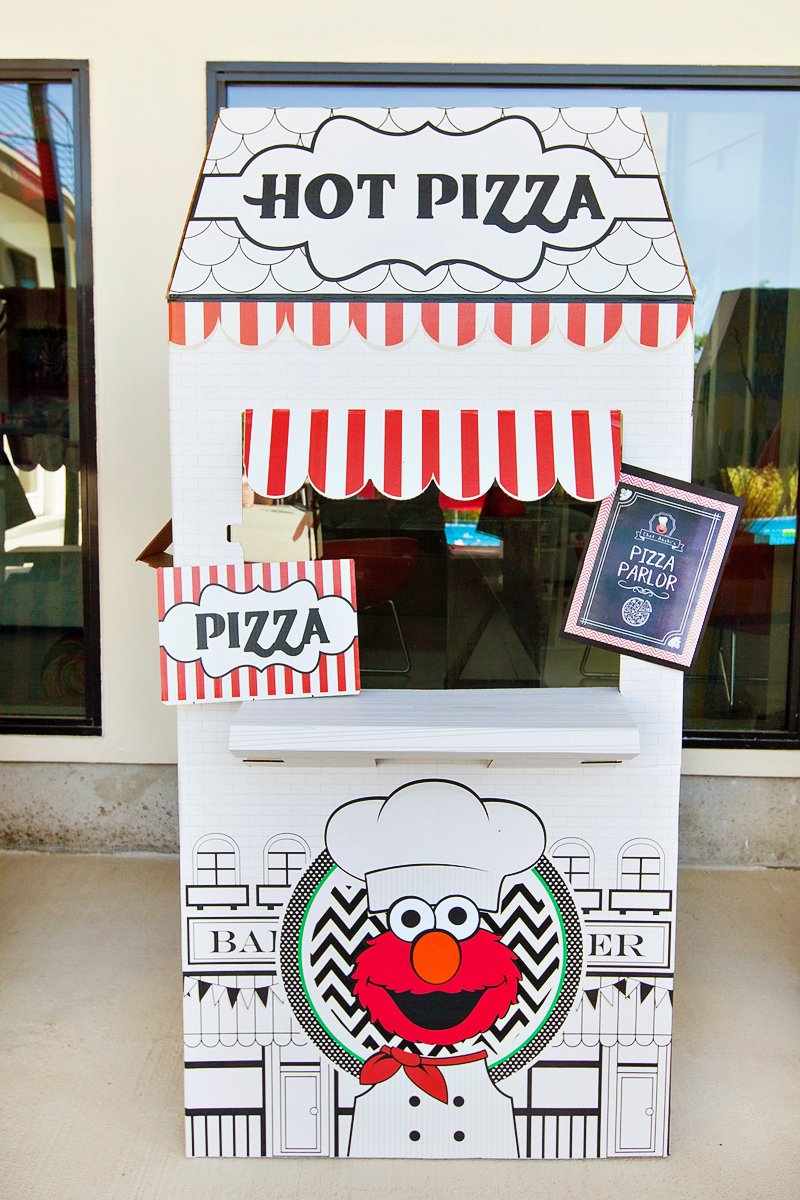 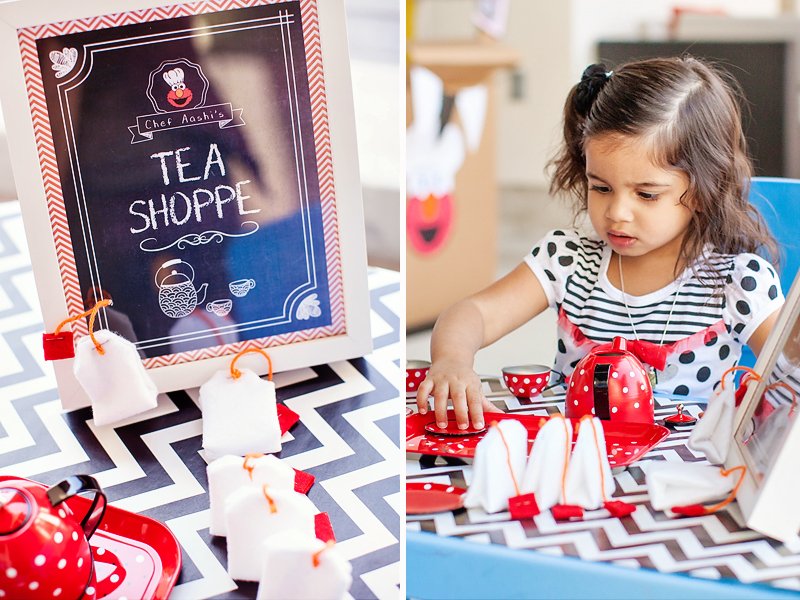 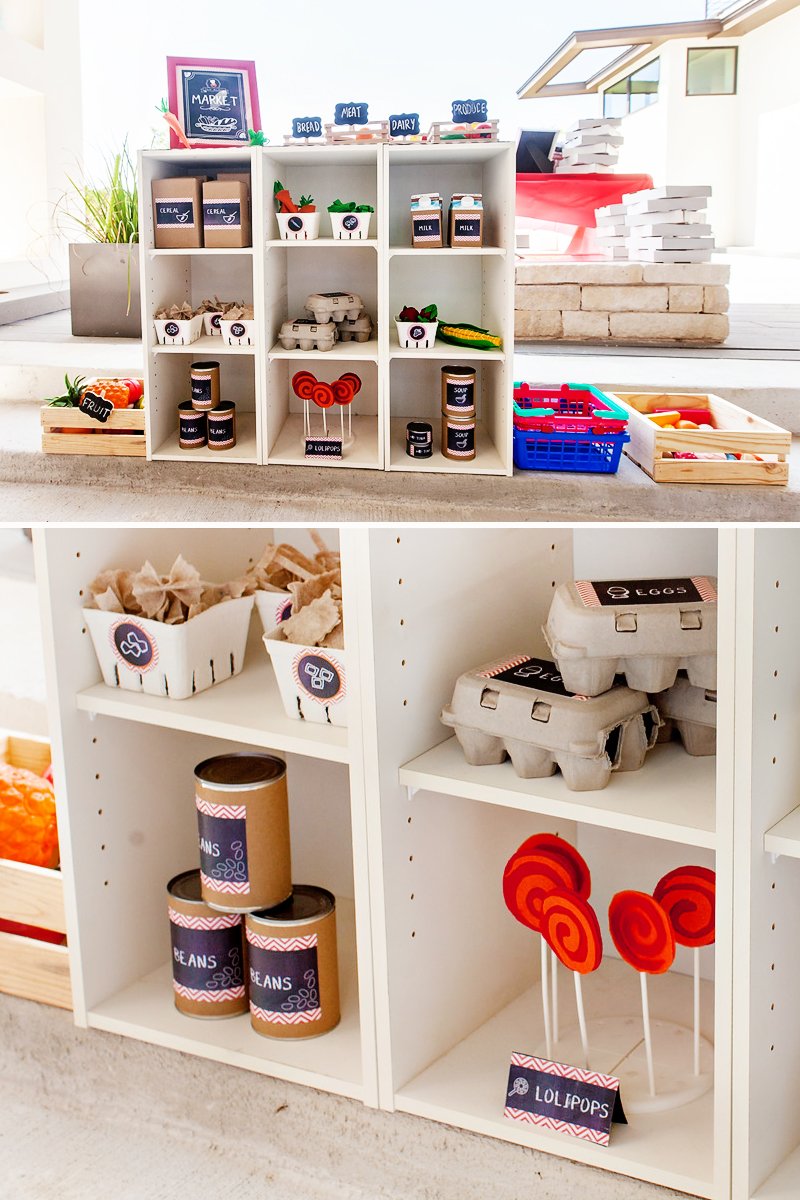 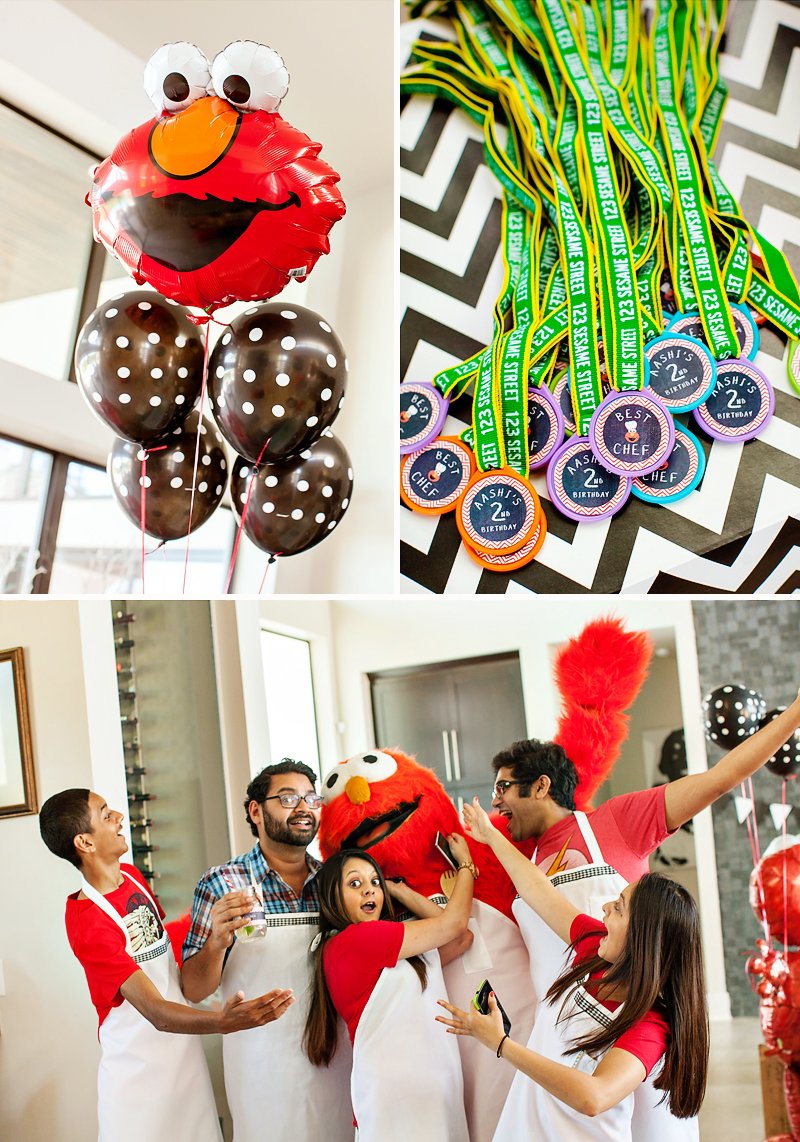 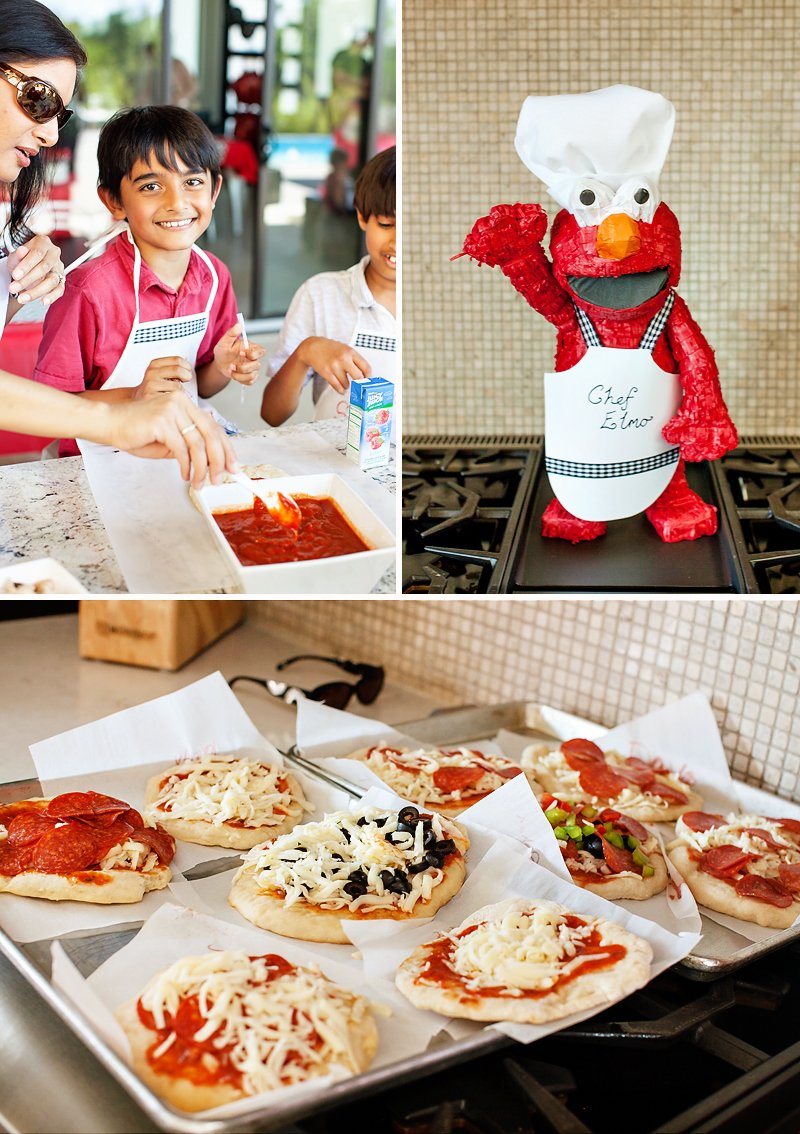 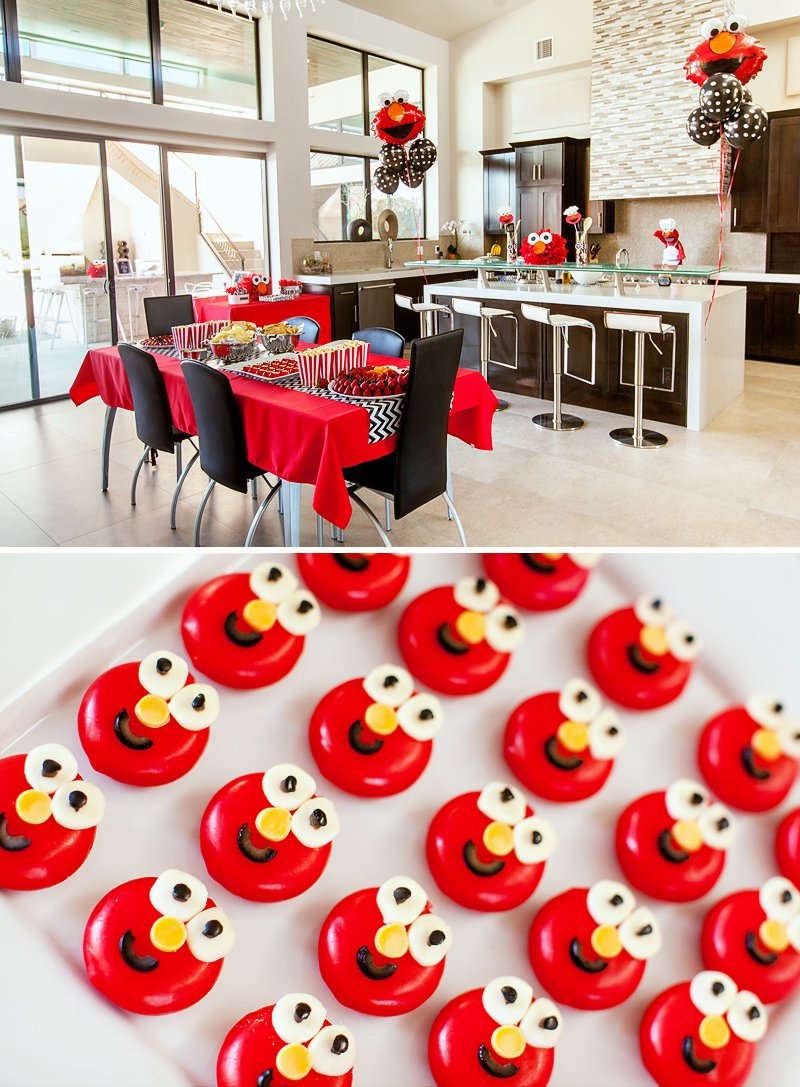 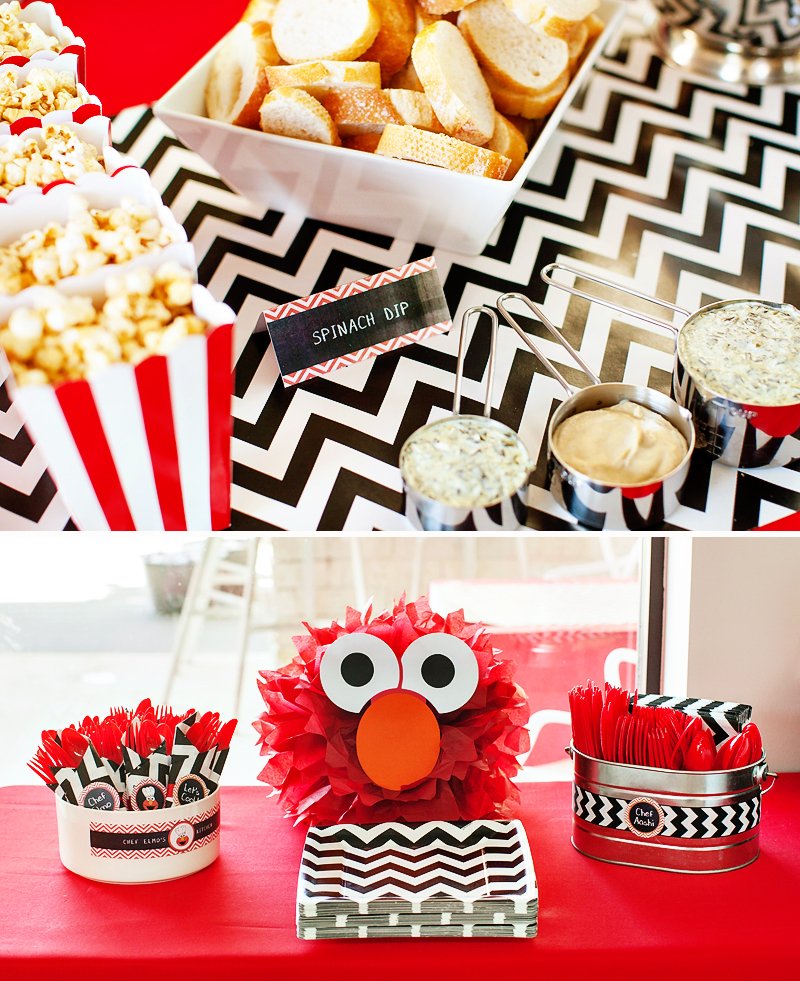 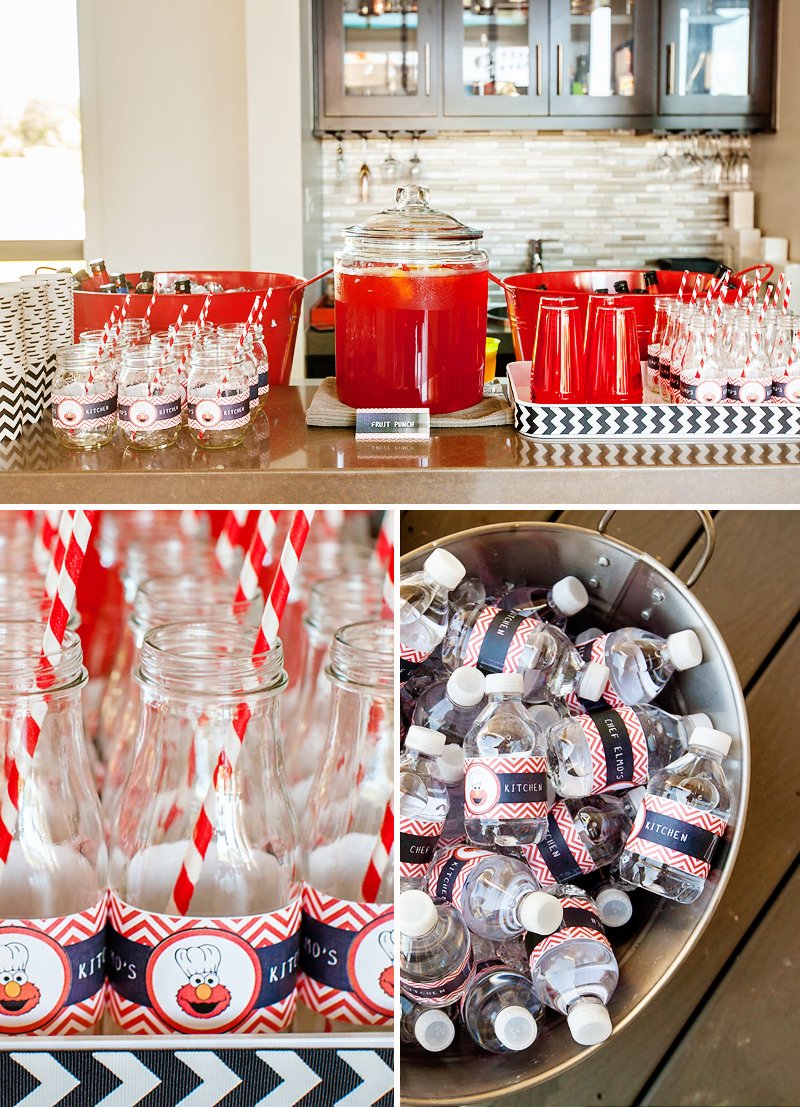 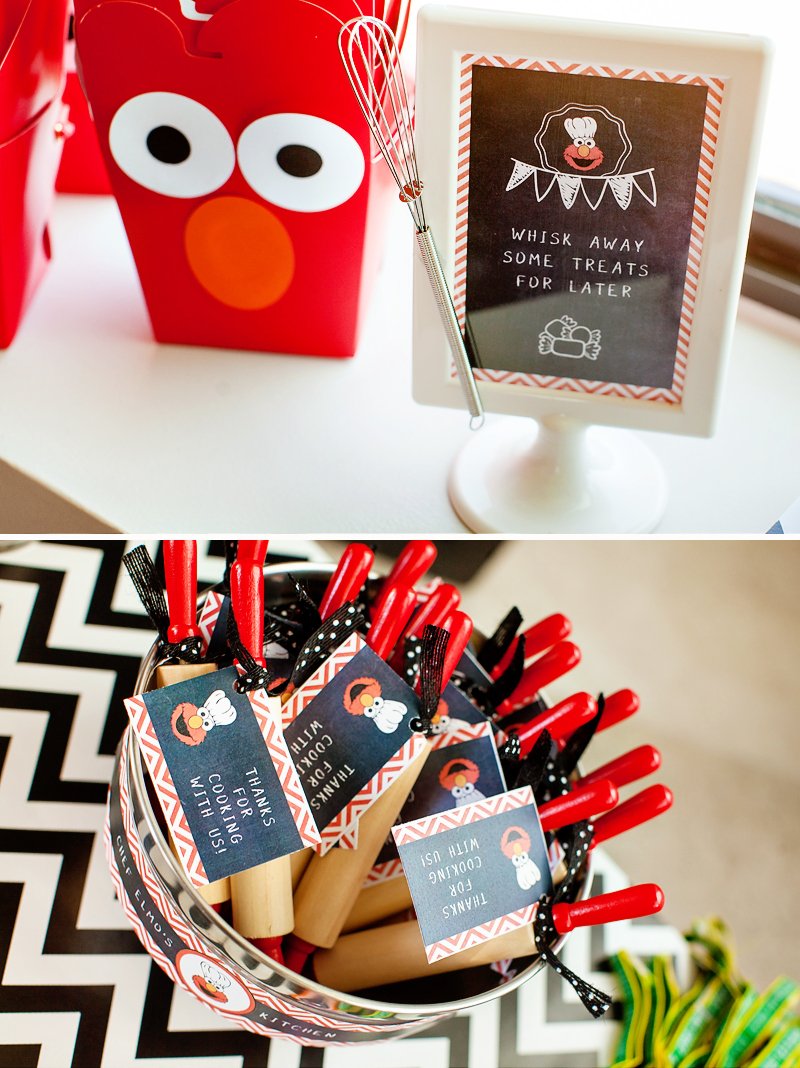 Birthday girl, Aashi, loves to make-believe. She spends countless hours in her play kitchen making pizza, tea, lemonade and other tasty treats! With that thought in mind, we wanted to throw her a play kitchen-inspired 2nd birthday party. She also loves Elmo, so we decided to incorporate Elmo into the theme as well. We did not want to make the party Sesame Street-themed, per se, so we made Elmo the “head chef”, but we ditched the rest of the Sesame Street gang. Sorry, Cookie Monster! We opted for a sleek, modern (but girly) color scheme of black, white and red, coupled with hints of orange, a vibrant chevron pattern and chalk writing.

DECOR
On the big day, an Elmo wreath on the door greeted the arriving guests. Throughout the party area, we placed Elmo paper pompom decorations and hung paper lanterns. Custom printable signs were placed on tables to guide the guests through the various activities. We used inexpensive chevron gift wrap as runners on the tables. We also made “utensil holder” centerpieces for the tables.

ACTIVITIES
When the guests arrived, each guest was given a personalized apron and chef hat to wear (and also take home as party favors). They were then free to explore the various activity stations:

DESSERT TABLE
For the dessert table, we wanted to incorporate as much kitchenware as possible. The Elmo macarons were presented on wooden spoons; the marshmallows were served up in the bowl of a stand mixer; the Elmo-, chef hat-, and chevron-cake pops (from Faye’s Cake Pops) were displayed in box graters; and the Elmo cookies (from MJ Tabush) were served on cutting boards. Children always come up with the most creative ideas and our favorite idea for this dessert table came from Aashi’s 7-year old son: Elmo rock candy! Other treats included cupcakes topped with Elmo fondant toppers (from MJ Tabush). The two-tier birthday cake (by Cake Crumbs SA) featured Elmo popping out of the cake, wearing his chef hat and carrying a fondant wooden spoon. But the most amazing thing about this cake was the taste—one layer was watermelon flavor and the other was orange flavor. Yum!

FOOD & DRINKS
In addition to an Elmo berry platter and an Elmo veggie platter, we made a platter of Elmo Mini Baby Bel cheeses. We also served dips in measuring cups, in keeping with the kitchen theme. Of course, we also had a bowl of goldfish crackers, since Elmo loves his goldfish! Dinner for the children consisted of their homemade pizzas, but for the adults, we served “Elmo Lagasse” meatballs and “Mr. Noodle” pasta.

FAVORS
In addition to the felt pizzas, personalized aprons and chef hats, guests left with mini rolling pins (from Birthday Express) and “Best Chef” medals (from Party City). We also placed some Elmo take out containers near the dessert buffet so guests could “whisk away” some treats for later.