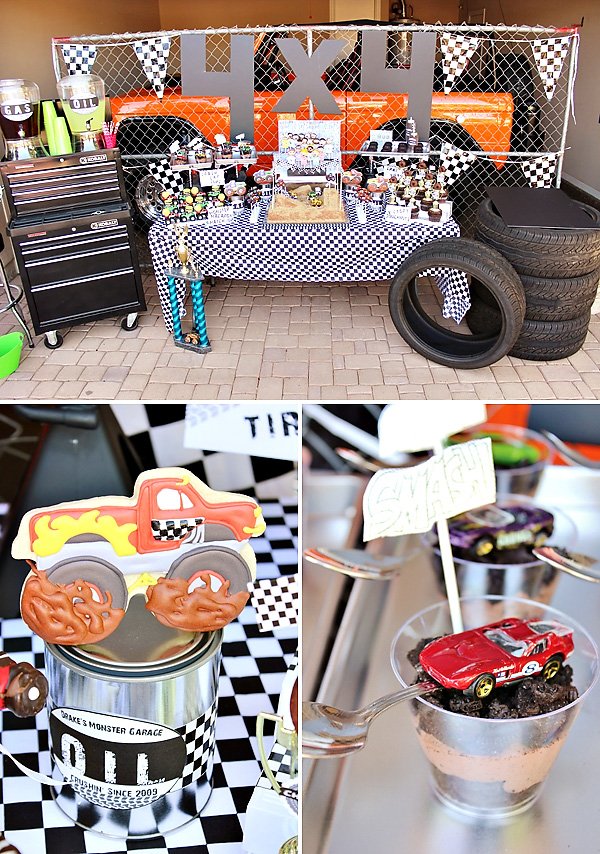 Ladies & gentleman, start your engines! Buckle up and get ready for this Awesome Monster Jam Truck Party by Nicole {and identical twin sister, Tonia} of Million Dollar $mile Celebrations! With an amazing arena birthday cake, monster truck races, and victory doughnut trophy cupcakes Drake’s birthday was a definitely a SMASH! 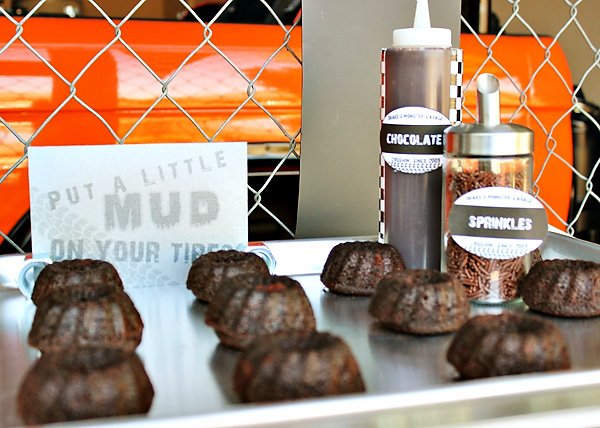 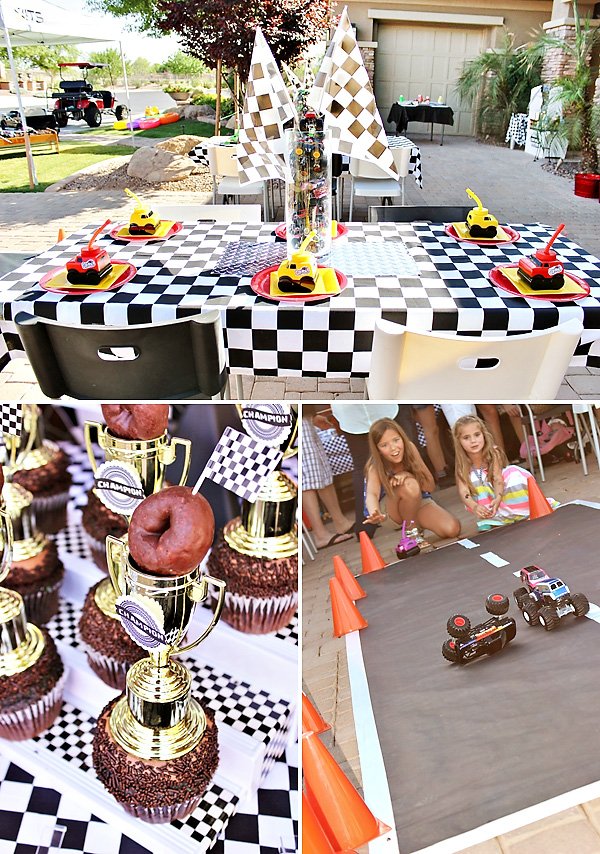 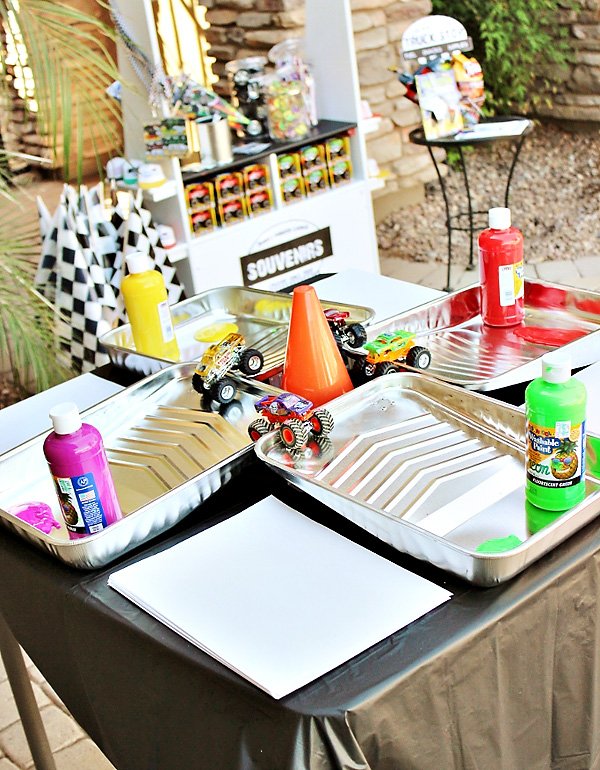 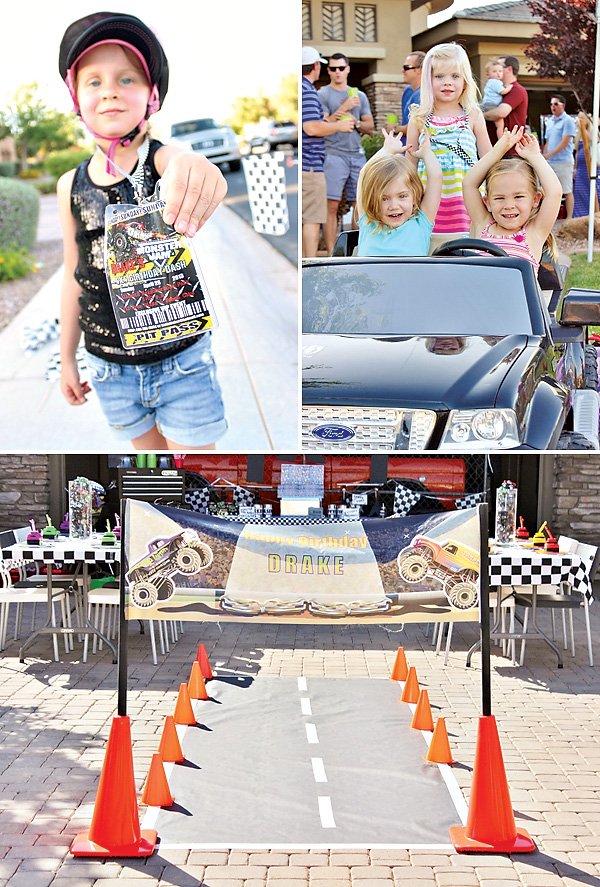 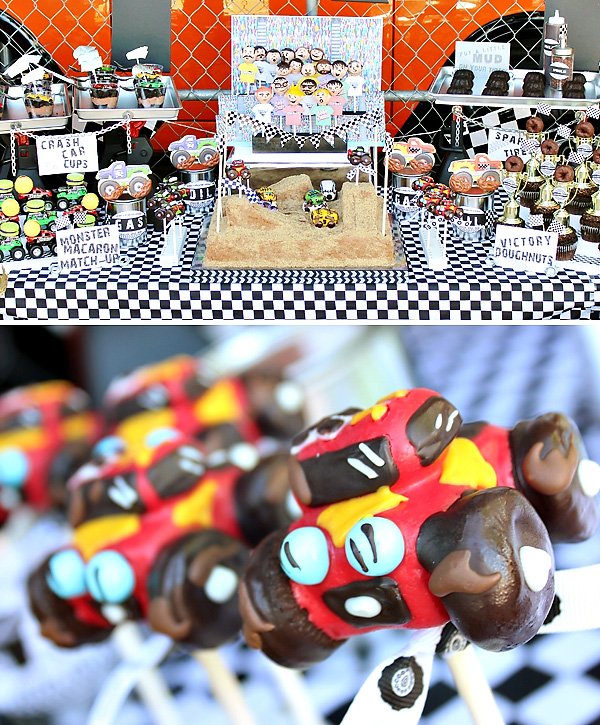 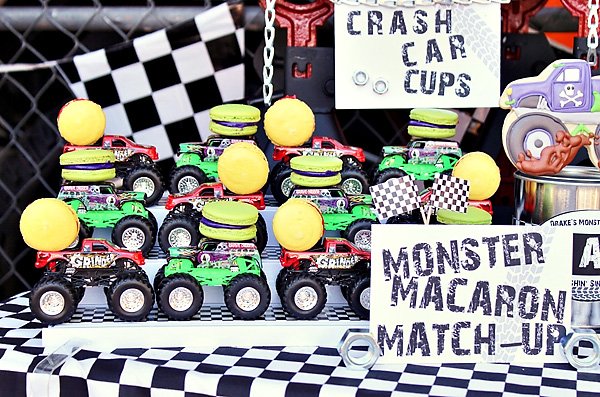 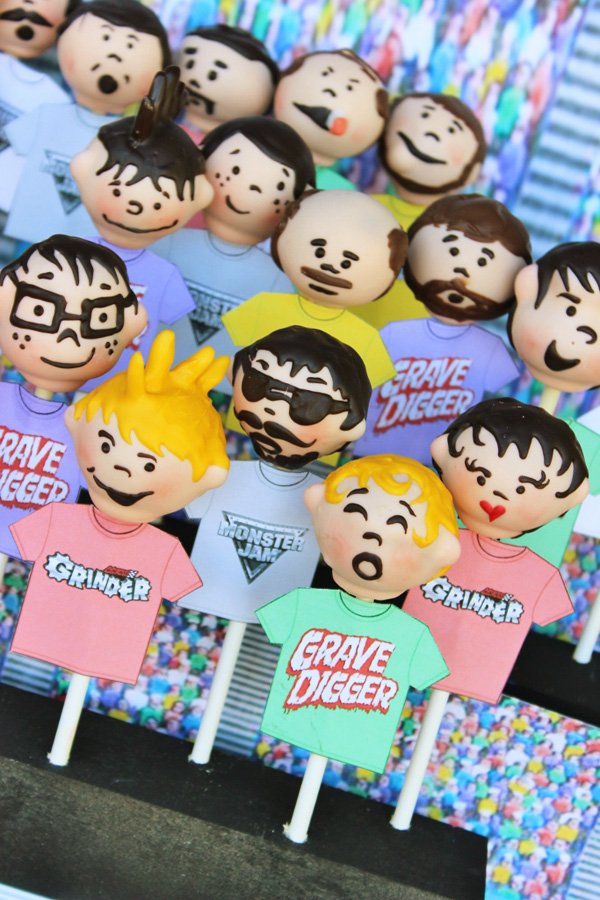 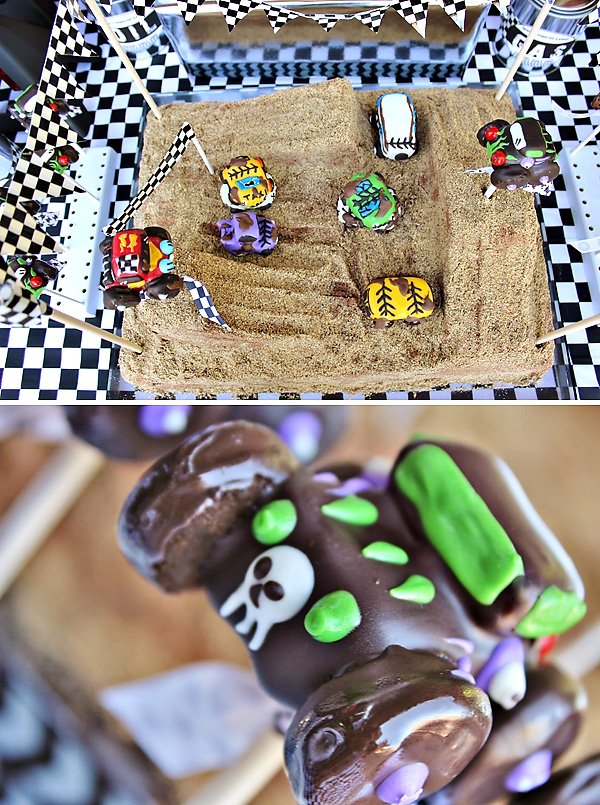 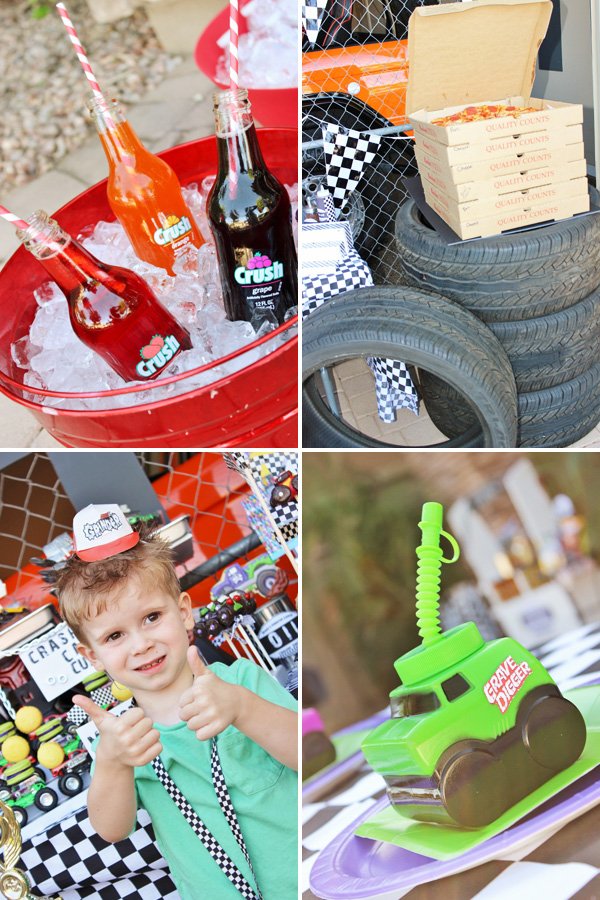 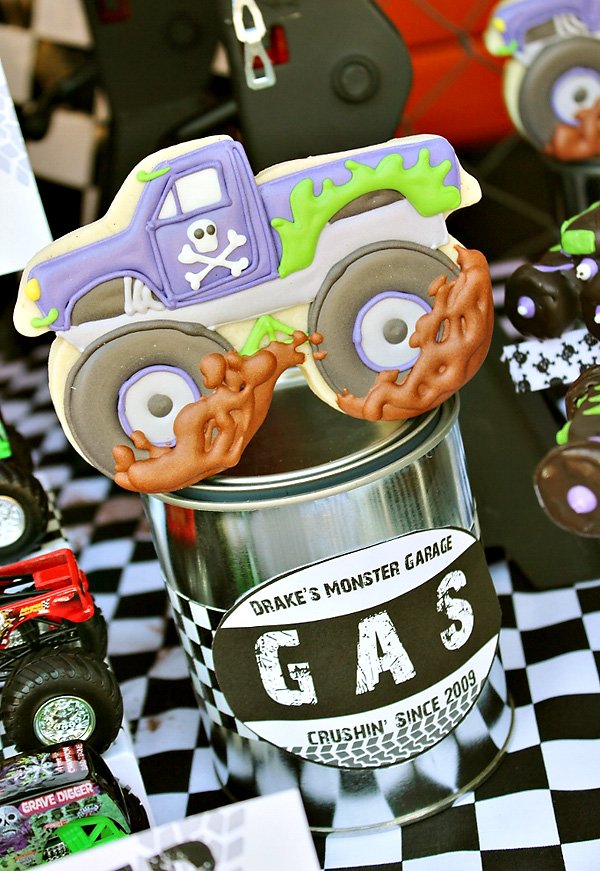 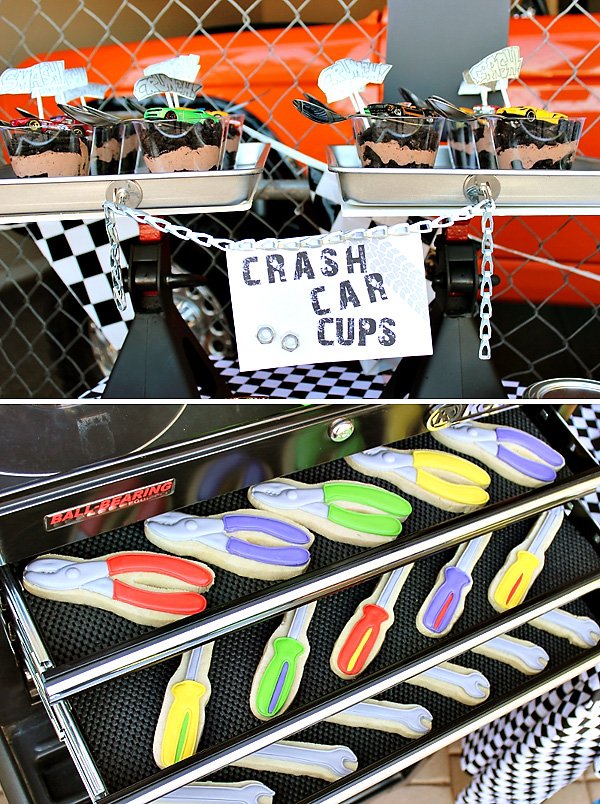 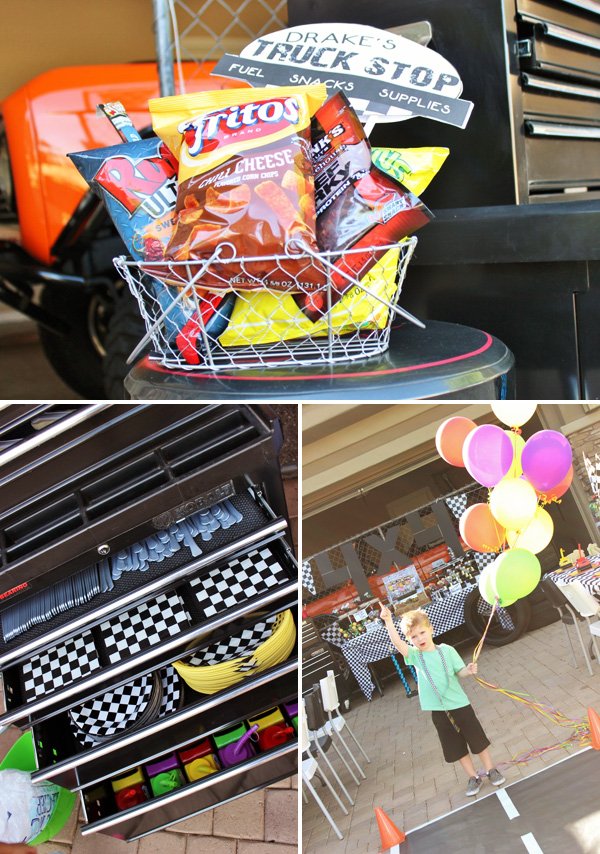 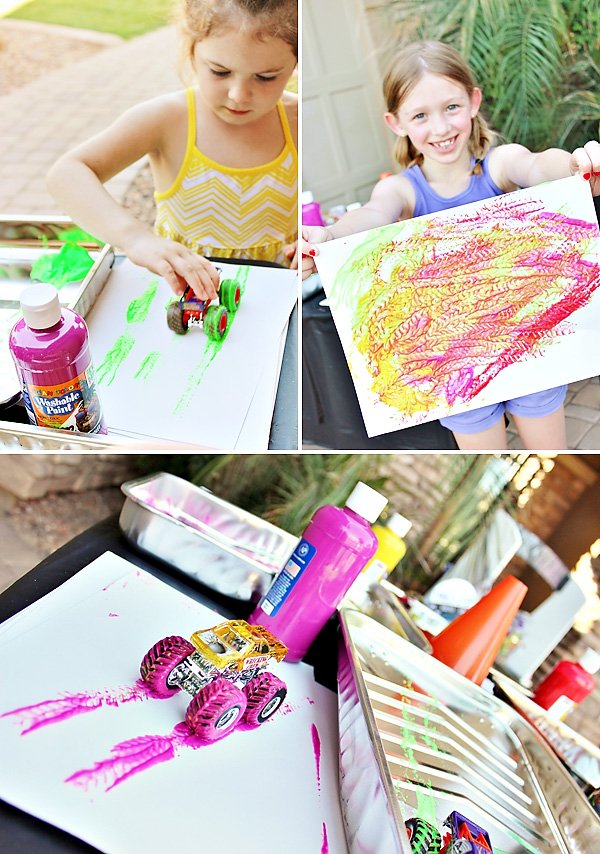 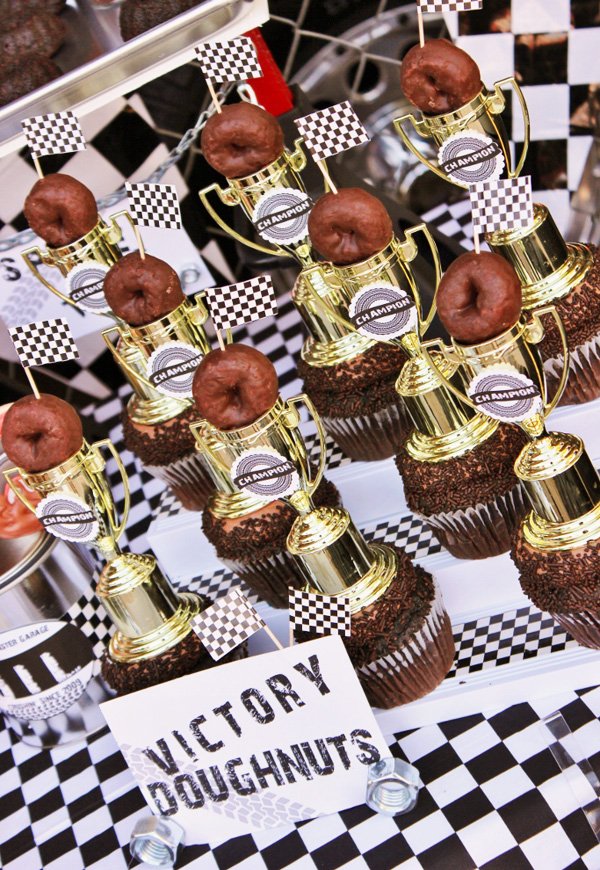 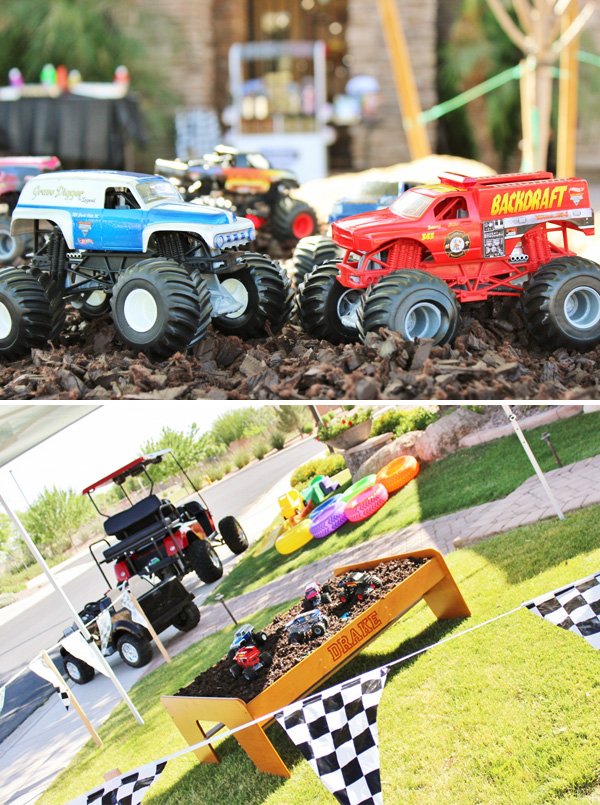 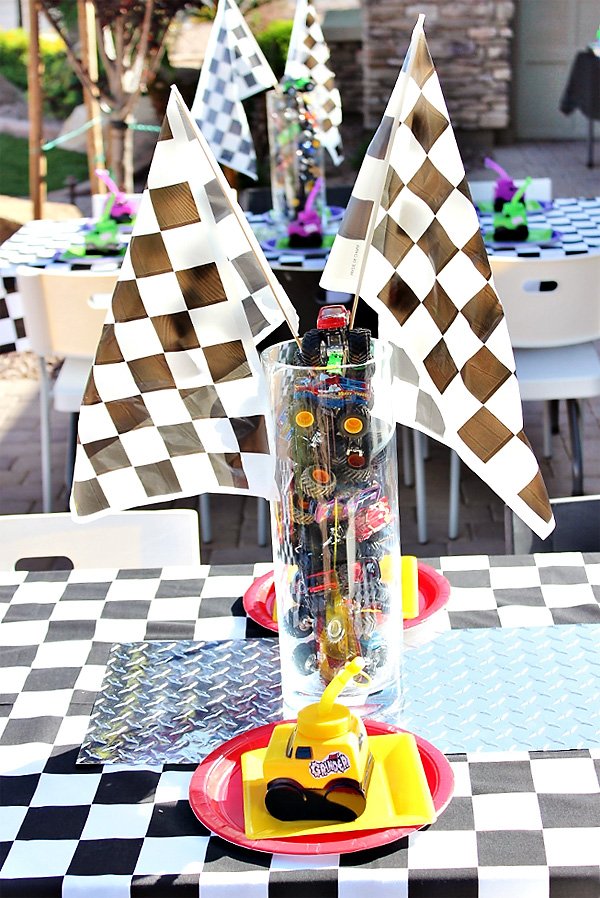 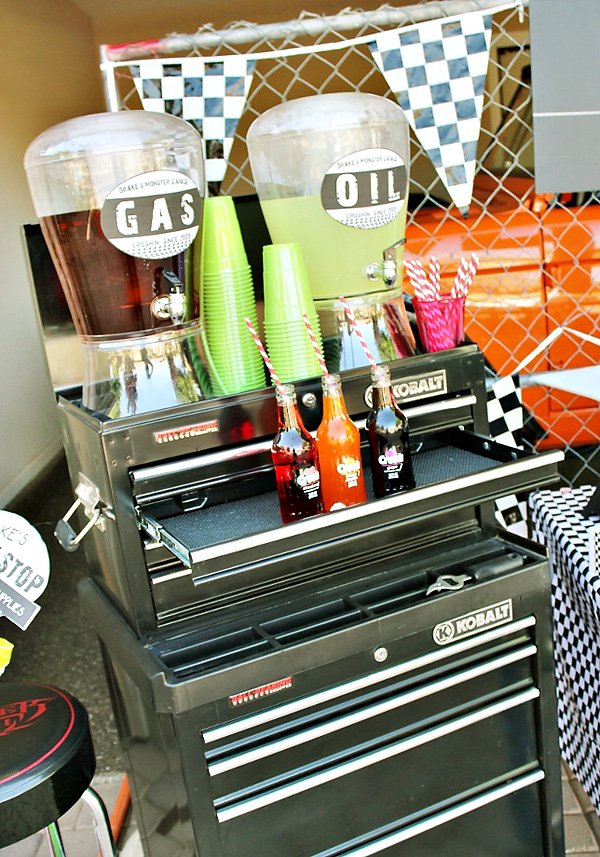 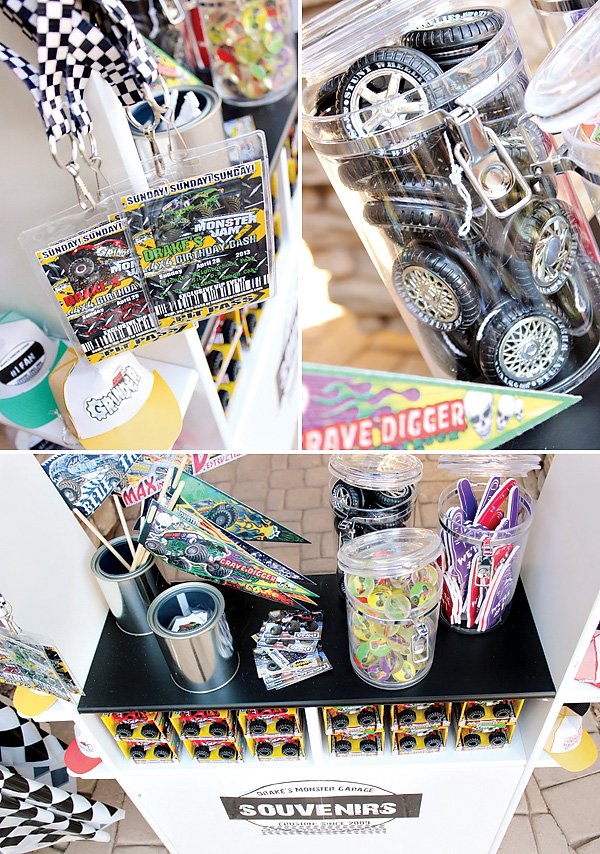 “Ladies… start your engines!!! You are going to just die over this party! My identical twin sister, Tonia, and I put all this together for her son, Drake. It’s so out of my girly-girl league but so perfect for any little truck-toting toddler (or big boy for that matter!) I was dreading helping with such a boyish theme and just fell in love with all the small details and clever angles we took. And… the pictures of the kids showed how ridiculously rad this party was for all the guests. Buckle Up!

The Tinker Family presents… Drake’s Monster Jam Party! One Kid!  Four Years!  One Night Only! Featuring the birthday boy himself and the monstrous match up… Grinder vs. Gravedigger! Catch all the engine revving, high flying, car crushing, and adrenaline pumping action!

This party is OUT OF CONTROL!!!  Check out what happened when guests were asked to bring ‘wheels’ to ride, and the party-planning Momma and Dad provided all the ‘Big Boy’ toys and treats! Not a single kid left without stains and smiles!  Speaking of smiles, the Tinker family celebrated the Million Dollar $mile way by requesting donations instead of gifts to a favorite local charity, The Ryan House.


Tonia, birthday boy’s party-lovin’ Momma, executed the most daring, dangerous and delicious display of Monster truck treats!  Scott pulled his amped-up vintage Ford Bronco into the garage and a chain-link fence was set as the backdrop, decorated with checkered flags and huge 4 x 4 signs!  After all, we are celebrating a 4th birthday!  Arranged to look like a Monster Jam arena, Tonia’s knack for dessert table design collided full speed with her son’s love for the car-crushin’ sport.  It was the perfect match-up between beauty and boy… tough and talent… pretty and ‘pretty awesome’!!!


They don’t call this thing ‘all utility’ for nothing!!!  From top to bottom drawer, it was stuffed with all things a party mechanic would need… utensils, plates, napkins, plastic food baskets, and monster truck sippy cups!!  Did we mention the top three drawers were filled with delicious cookie tools created by Casey’s Confections?!?!  I’ve never seen a wrench, screwdriver or pliers look or taste sooo good!  Topped with a refueling station, guests filled up on gas and oil… I mean tea and lemonade.  Bottles of CRUSH (clever) soda fizzed and fueled in three crowd-pleasing flavors!


“Sitting monstrous in the center of the table, weighing more than a single person can lift is… the cake!!!”  Laurie from Confection Perfection Desserts helped Tonia’s vision become a reality with the jumps and ramps of a real monster truck arena… just smaller and a lot tastier.  Racing through the track are Grinder (birthday boy’s favorite) and Gravedigger cake pops!!  And what’s a Monster Jam rally without some crush cars and demolition derby racers!  Piled high and smashed into the delicious cookie crumble dirt are adorable cake pop treats from Mom’s Killer Cakes!  In the crowd… on the edge of their seats… are the spectators cheering on their favorites, hooting and hollering, and screaming and shouting!!  Every single cake pop pal is different and you just really have to look closely to enjoy the humor that was added to each member of Drake’s Monster Jam crowd!  Way to rock it, Mom’s Killer Cakes!


In case you did not know, when a driver wins, they head straight to the center of the arena to spin around… and around… and around in an act called Victory Doughnuts!  Well, Tonia topped a Sweet Daddy’s Cupcake with a golden ‘Champion’ trophy, and then added a single checker-flagged adorned chocolate donut to the trophy!


When competing head-to-head, it’s hard to say who’s going home the champion… Grinder or Gravedigger???  But when it’s a monster macaron match-up, I’m happy to root for both teams!  Made by the skillful Confection Perfection Desserts, the macarons were made in team colors and loaded on the beds and roofs of the Hot Wheels rides.  Whose team are you on??


Let’s be honest… Monster Trucks are made for crushin!  So, Tonia didn’t feel too bad to ask Grandma Dianne and Grandpa Walker to take some of Drake’s cars and crush them using a vice (seriously HARD CORE) before gluing them to a silver spoon for digging into the tasty treat!  Tonia did some crushing of her own, layering homemade pudding and crushed up Oreos in clear cups and topping with topper sayings, “Crash,” “Smash,” “Crush,”!

Pizza was served… beer was tapped… and anyone with the munchies stopped at Drake’s Truck Stop for fuel, snacks, or supplies before driving off into the sunset!