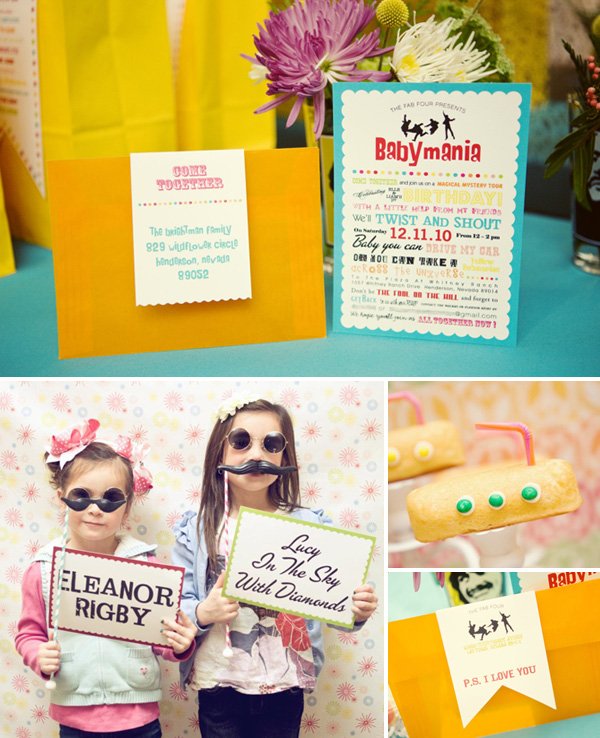 I’m SO excited to share this ultra-creative party with you today! It’s a fantastic Beatles-inspired “BABYmania” theme designed by the ridiculously sweet & talented Suzanne of SHEPAPERIE… and from song lyrics woven throughout the invite & party decor to vinyl record pedestal stands for the sweets table and DIY retro mustache props for the “photo booth”, the entire party is just overflowing with outside-the-box thinking and witty details! Suzanne created this theme to celebrate the first birthday of her adorable TWINS – Elle and Liam… hence the inspiration for the baby MANIA! Pretty clever, right? =) 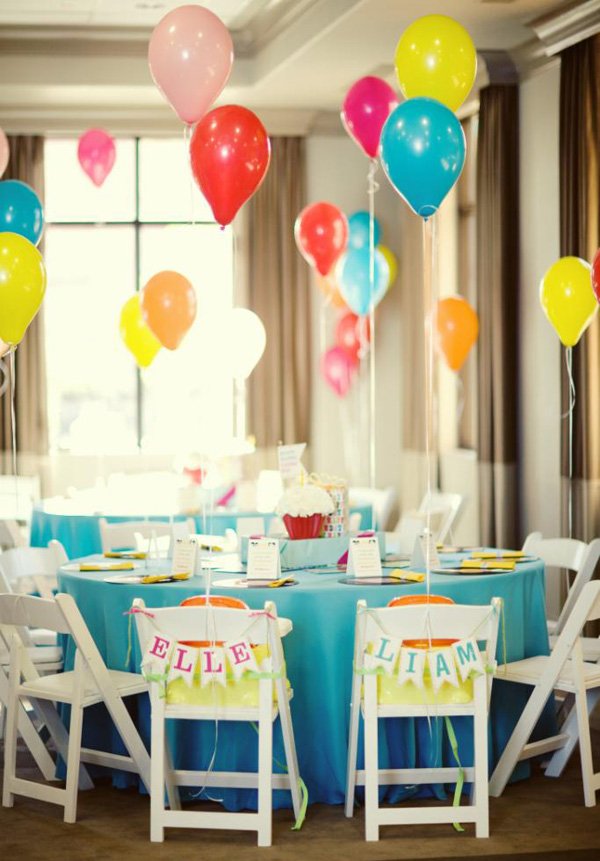 Since there are so many fabulous pics to share (as captured by the wonderful Jeanna Hayes), I’m going to make this one a 2-part feature. You’ll find all the details on the invites, decor, photo booth, and favors here in Part 1… and Part 2 will feature the equally creative MENU, complete with theme-appropriate items like “yellow submarine twinkies” and an “Octopus Garden” salad station! 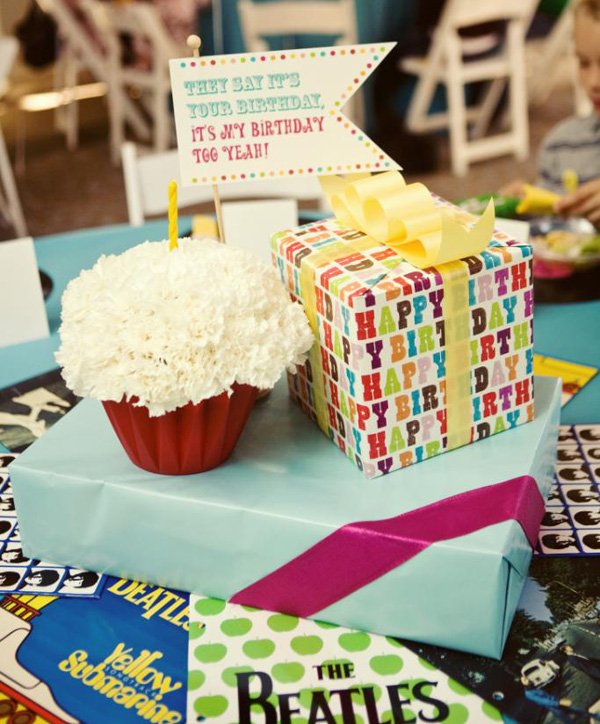 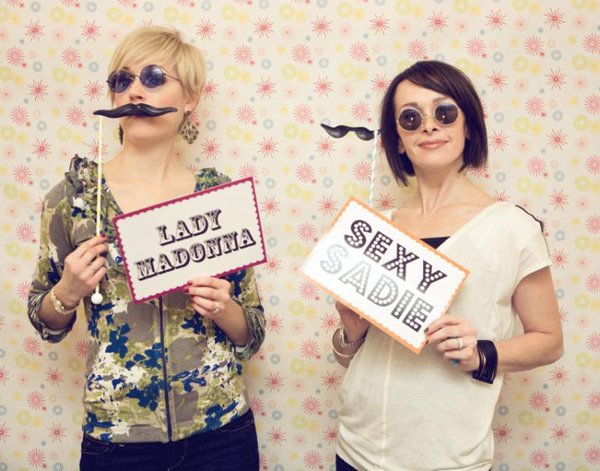 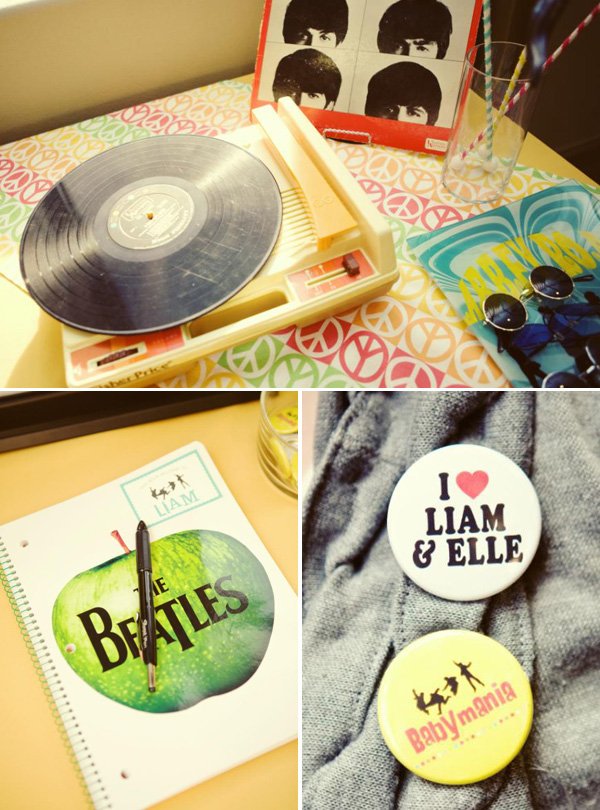 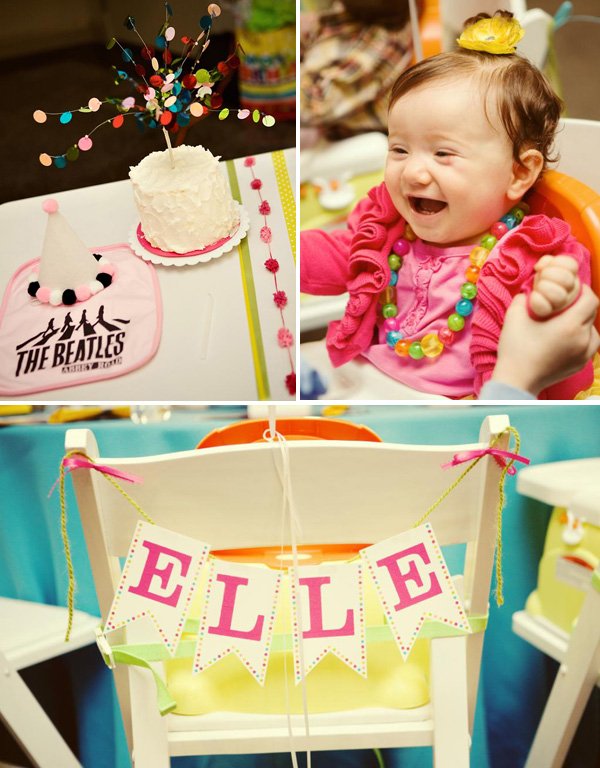 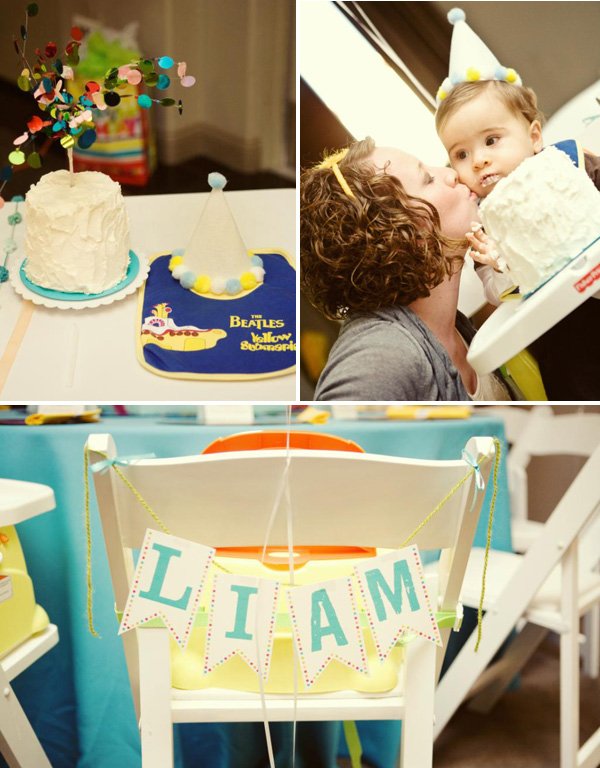 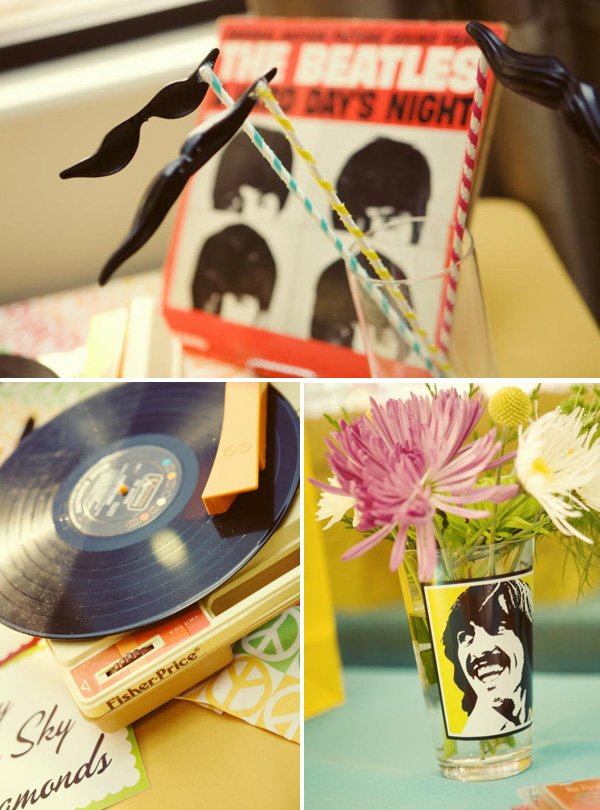 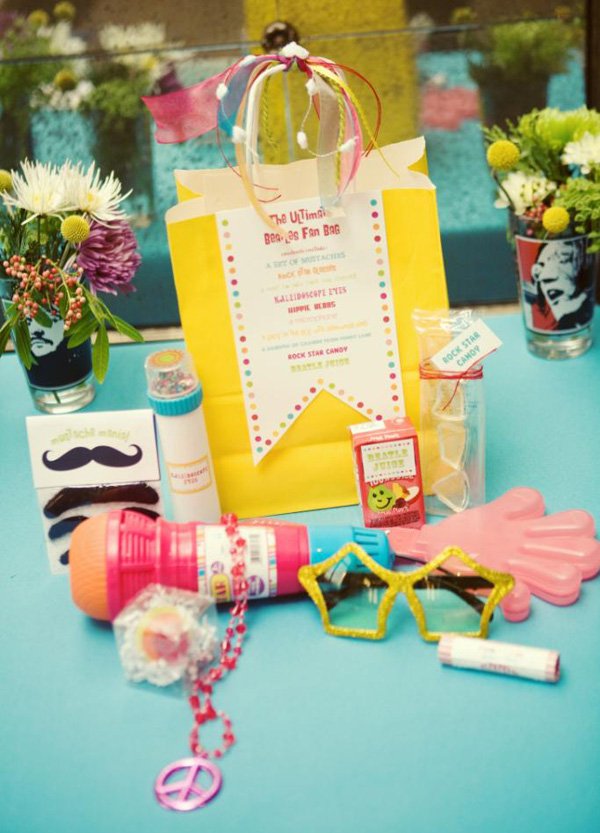 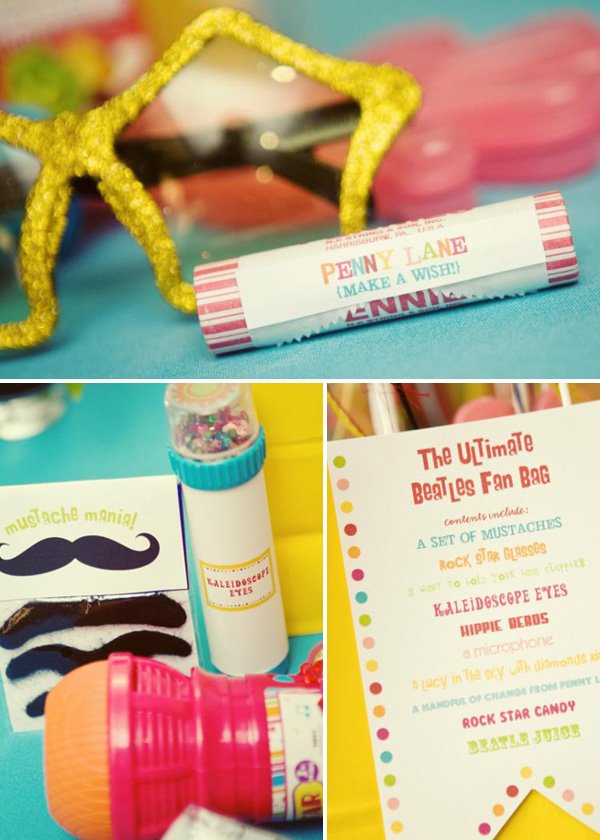 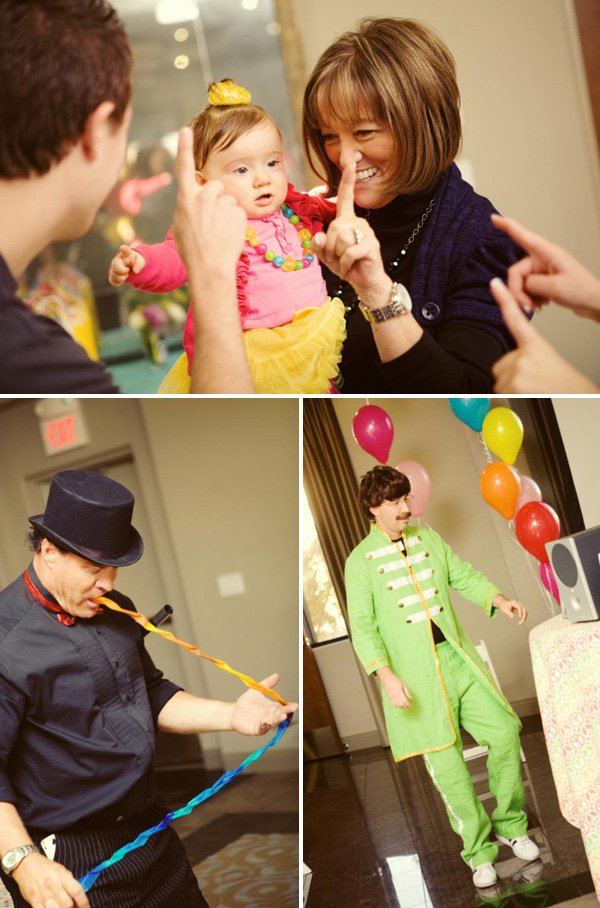 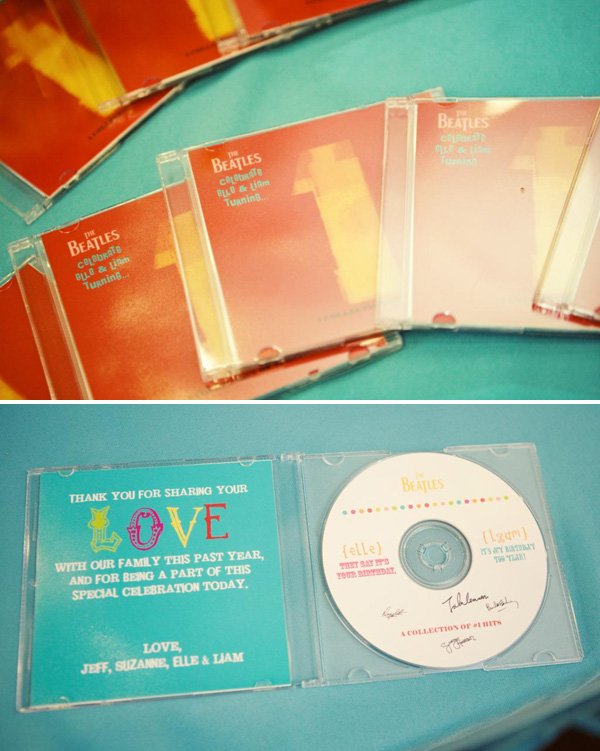 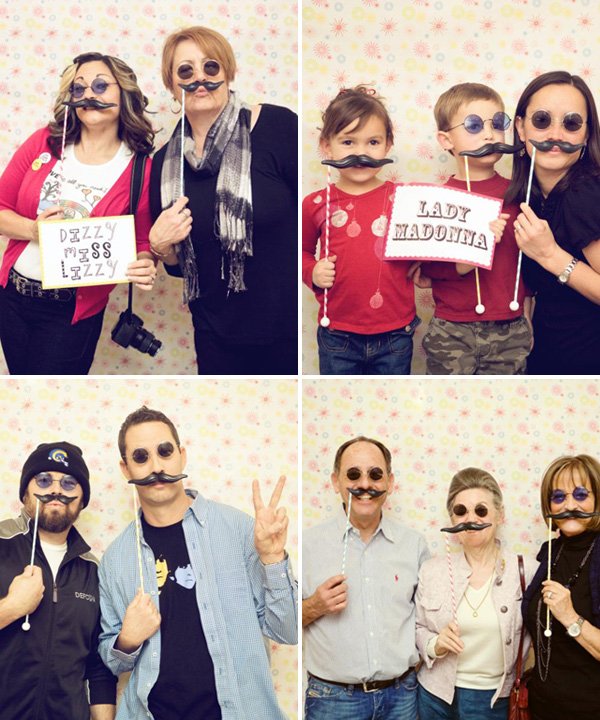 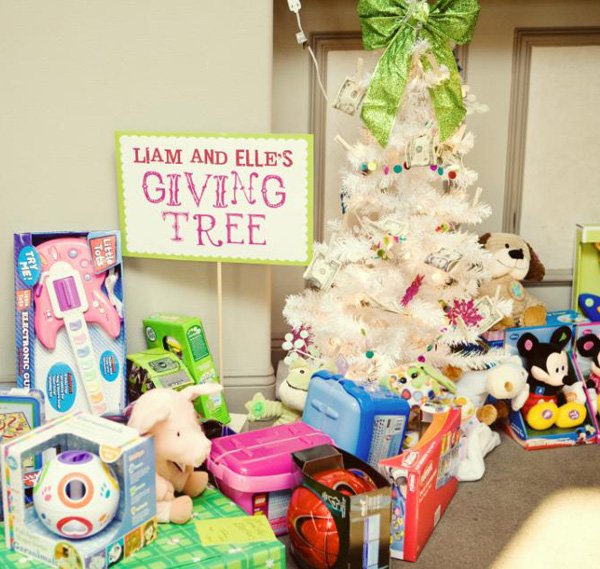 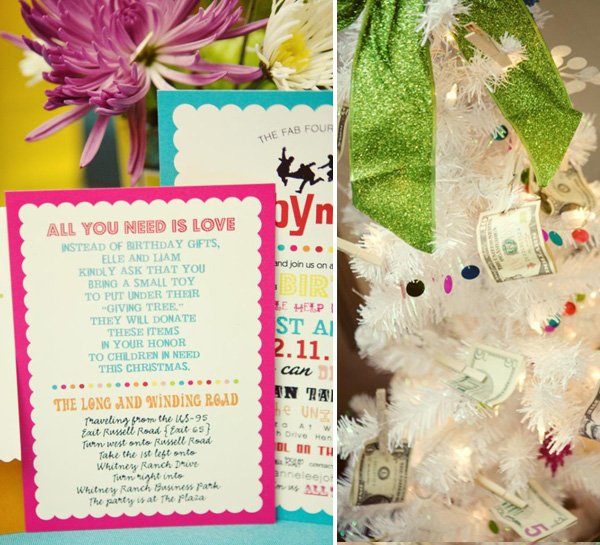 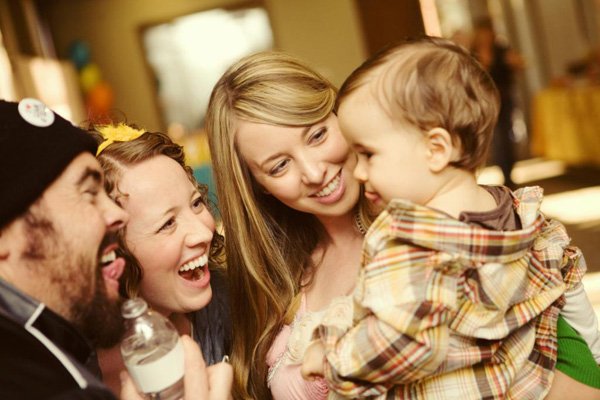 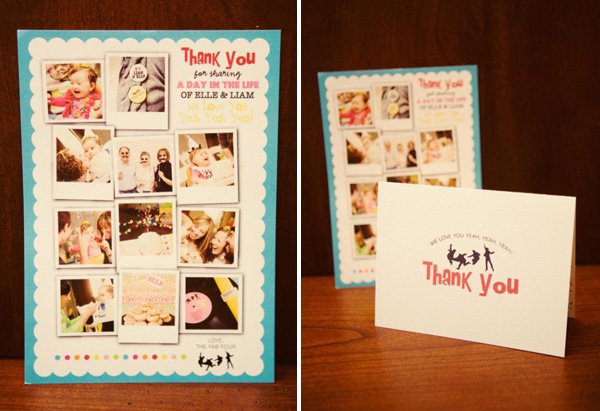 I wanted a motif as unique and special as they are to us. My husband and I both LOVE The Beatles, and since the babies are too young to really be into anything yet (and we figured all those princess and Star Wars parties will be coming soon enough), we wanted to go with something that was so “us.” So out of that, BABYMANIA was born.

I racked my brain trying to come up with concepts and a color scheme that wasn’t too girly and frilly, and not too boy-ish either. I took a cue from the “Yellow Submarine” and incorporated a lot of yellow since it’s such a bright, happy color and of course gender natural too. I also pulled hints of turquoise (for my son) and hints of hot pink (for my daughter) into the mix and I since I love color, the look and feel turned out to be really cheerful and fun!

As you will see, a lot of time, effort and love went into making this party such a special celebration for our family and friends. All those sleepless nights leading up to it were worth it though! So you asked for details, and well, there are details galore! So here is a run down of BABYMANIA…

THE INVITATION
I really wanted the wording of the invitation to have several Beatles songs woven throughout the ensemble so I enlisted the help of my crazy fanatic husband for this portion of the invite. Between the invitation, the enclosure card and the address label, I think we incorporated 14 different song references.

THE DECOR
The decorations were all inspired by anything and everything Beatles. As guests entered the party, they made a stop at our “photo booth” to have their picture snapped with a few fun props. We had John Lennon glasses and Beatles mustaches on a stick for the guys, and for the girls, I had 5 different signs to choose from to hold up that featured a woman’s name in the song title (ie” “Lucy In The Sky With Diamonds,”Eleanor Rigby,” etc.). They also received a “fan button” to wear that day that either said “I LOVE LIAM & ELLE” or “BABYMANIA.”

THE CENTERPIECES/TABLE DECOR
I was inspired by the song lyrics “They Say It’s Your Birthday, It’s My Birthday Too, Yeah” since the babies obviously both share the same birthday. I did a classic birthday motif and had wrapped gifts, a cupcake arrangement made out of fresh flowers, and a pennant sign, which all sat on top of an array of Beatles folders that I found months prior. I also tied balloons in varying colors and heights to the back of each person’s chair.

Other table décor included a record at each person’s place setting (I found vintage records from thrift stores and designed and printed a new label to go over top), a napkin with a “Ticket To Ride” napkin ring, and a tented menu card.

DIY PROJECTS
This whole party seemed like a massive DIY project (!), but some of my favorite projects included:

ENTERTAINMENT/ACTIVITIES
Since you can’t very well go on a MAGICAL MYSTERY TOUR without having any MAGIC, we thought it would be fun to hire a magician to come and perform tricks for the kids. I’m pretty sure some of the adults were quite entertained as well!

I also asked (ok, maybe bribed) my husband to make a special appearance as John Lennon, dressed head to toe in a Sgt. Pepper costume! He lead us all in singing “Happy Birthday” to the babies as he presented them with their birthday cakes

And lastly, my husband also took on the job of creating a photo montage, set to all Beatles music (“In My Life”, “Here Comes The Sun,” and “All You Need Is Love”), which highlighted the babies’ first year. This one was by far the most touching (and tearful) part of the day.

LIAM AND ELLE’S GIVING TREE
Instead of our guests bringing gifts for the babies, and since the party was 2 weeks before Christmas, we thought it would be a nice idea to have “Liam And Elle’s Giving Tree” where guests could bring an unwrapped toy to be donated in their honor to children in need that holiday season. It was really awesome being able to give so many great items away to children who needed a little something extra to lift their spirits during Christmas time.

FAVORS
We had both adult and kid favors. The adult favors were CD’s that my husband made that had a collection of The Beatles #1 hits on them (similar to the one that was released a few years ago) and for the kids we gave them each “The Ultimate Beatles Fan Bag.” Contents included:
– a set of Beatles mustaches -rock star sunglasses
-“I Want To Hold Your Hand” clappers that lit up
-“Kaleidoscope Eyes” (a kaleidoscope)
-hippie beads -a microphone -a “Lucy In The Sky With Diamonds” ring (Ring Pop)
-a handful of change from “Penny Lane” (a roll of pennies)
-rock star candy -and Beatle Juice (a juice box)

And there you have it, BABYMANIA! This was certainly my most favorite party I’ve ever planned and one that was very close to my heart. It was wonderful having a husband who was really on board with it too and anxious to help out with many aspects of it. Having his creative touches throughout the party made all the details that much more meaningful and special to me. I guess it’s fair to say that we truly are CRAZY for Liam and Elle!”

P.S. Check out full details on the FOOD & SWEETS TABLES in Part 2!