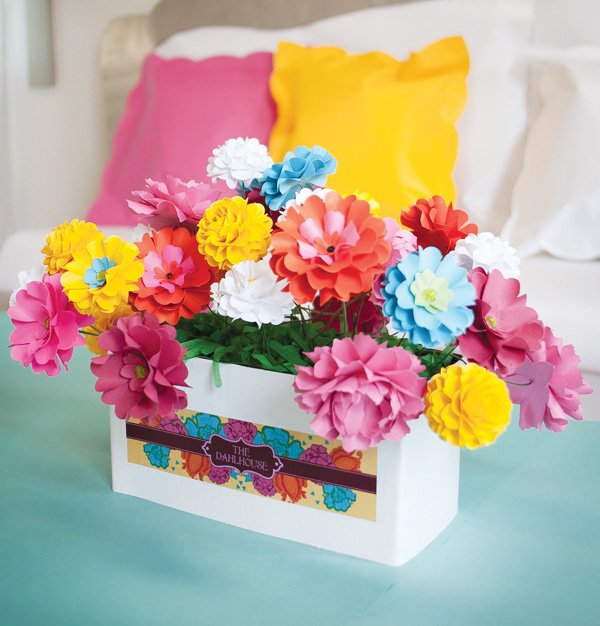 This “Dahlhouse” celebration was for Erin’s daughter, Dahlia, and it was brought to life by transforming a bare Town Hall into a real, life-size dollhouse using only paper materials! She used laser cut cardboard and paper materials for everything from the chairs and tables to the kitchen cupboards and {crepe paper} curtains. Inside and out, this space was completely altered to look like a life sized doll house for the party guests to enjoy! 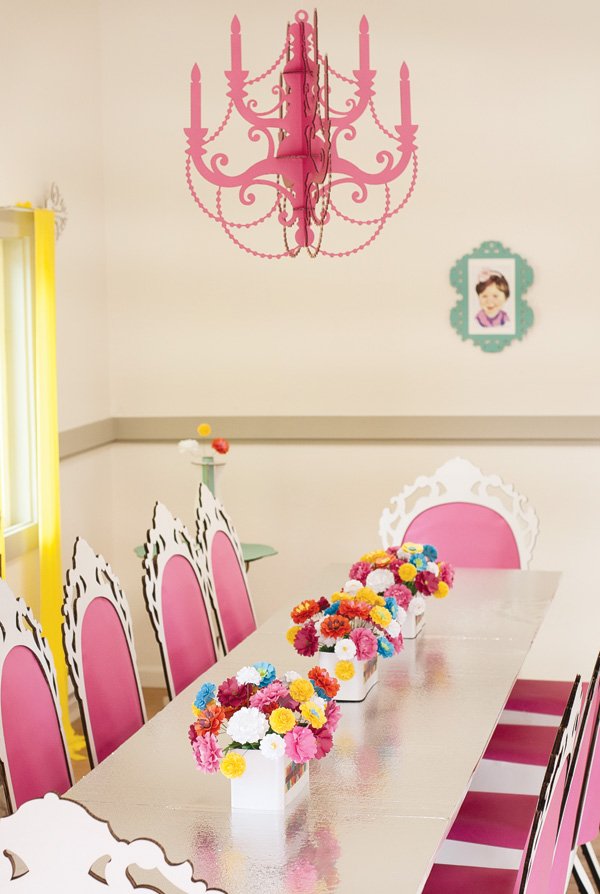 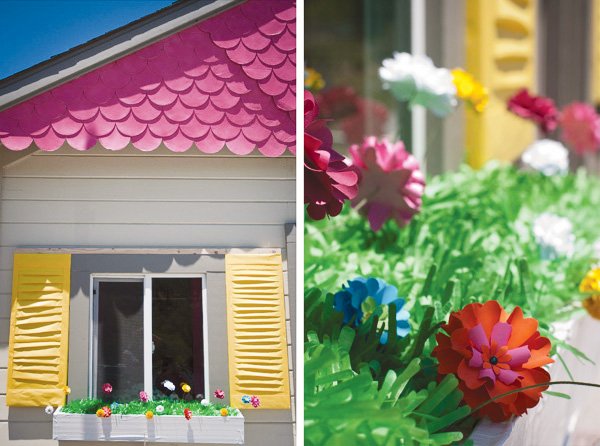 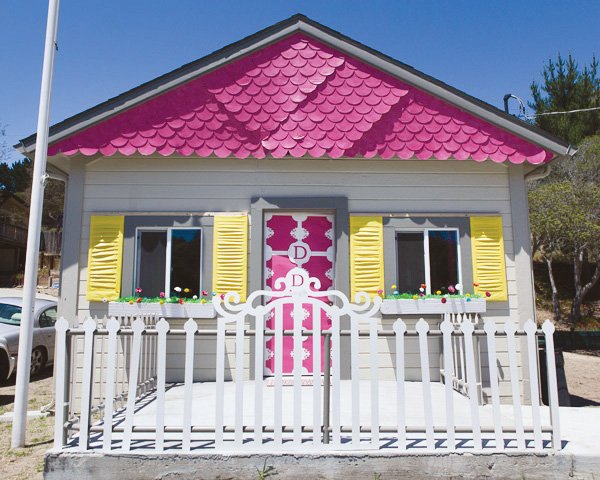 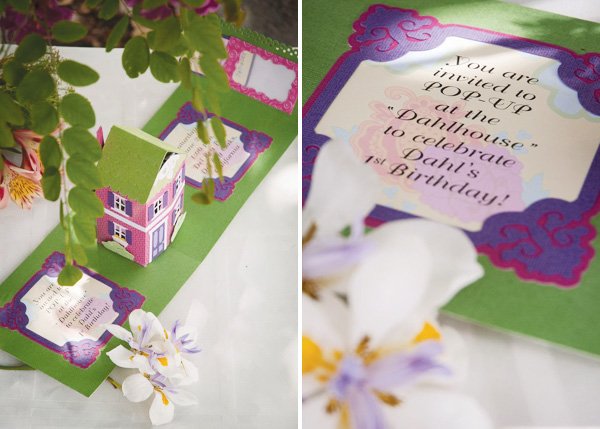 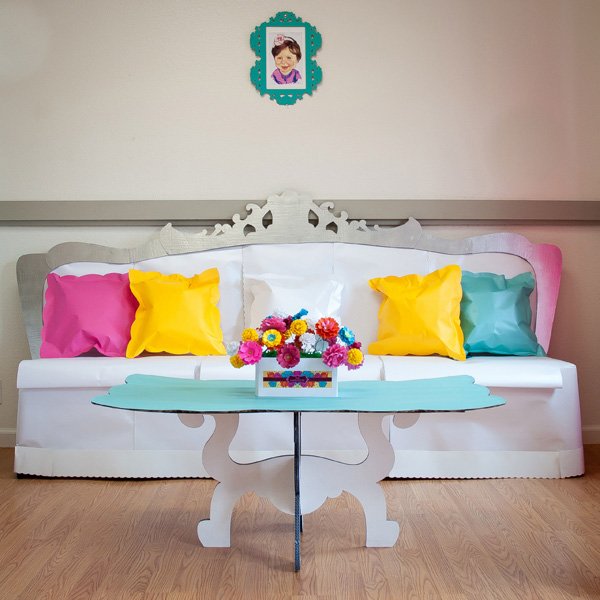 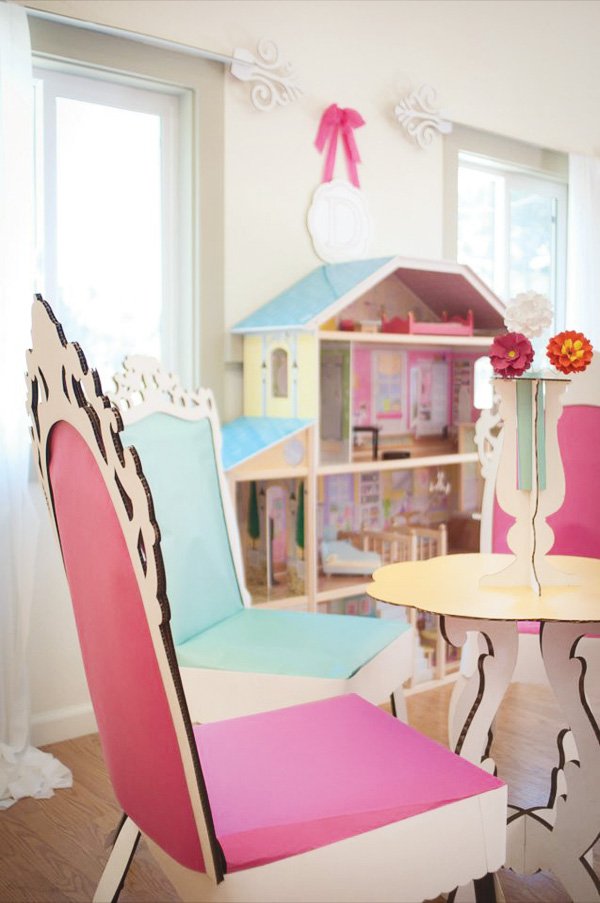 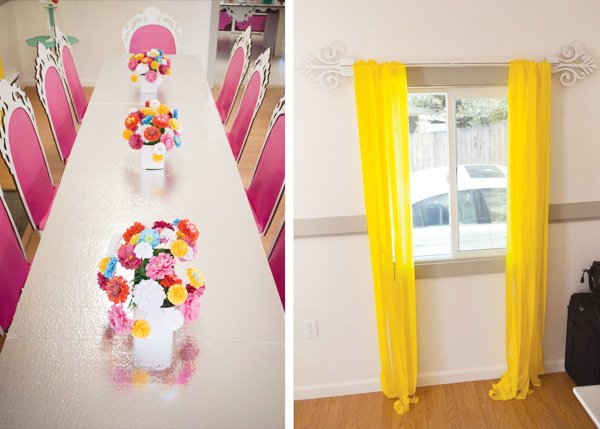 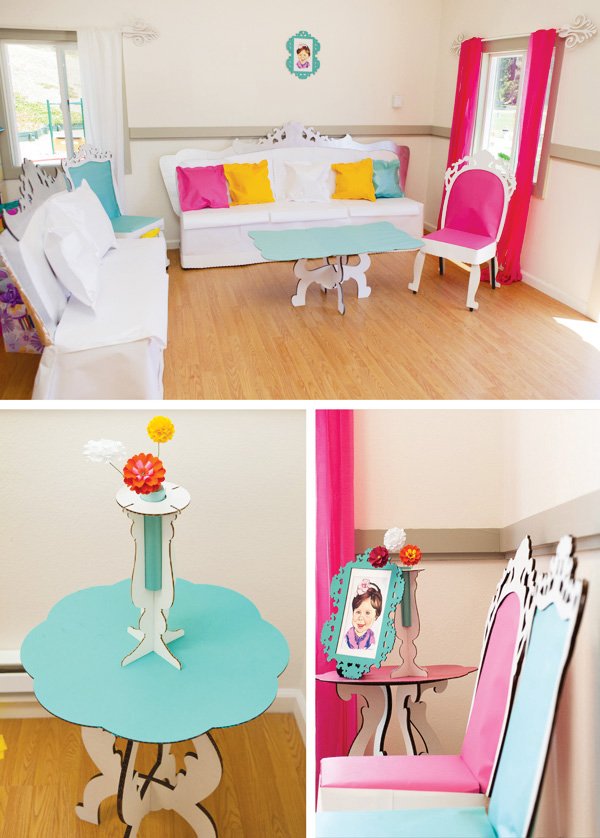 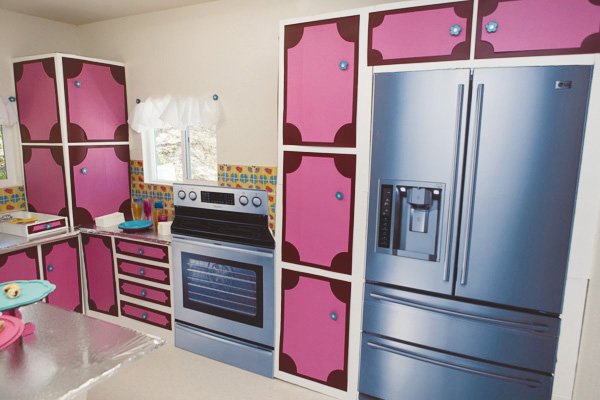 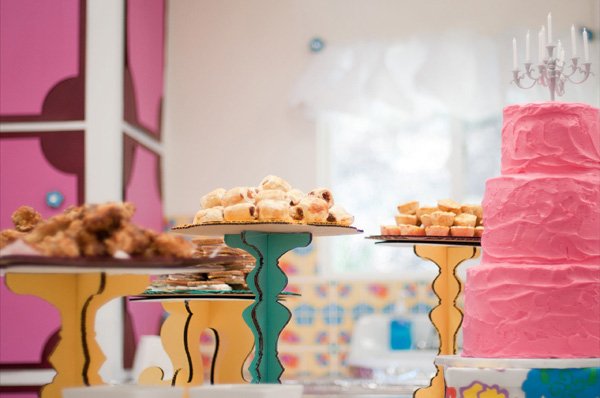 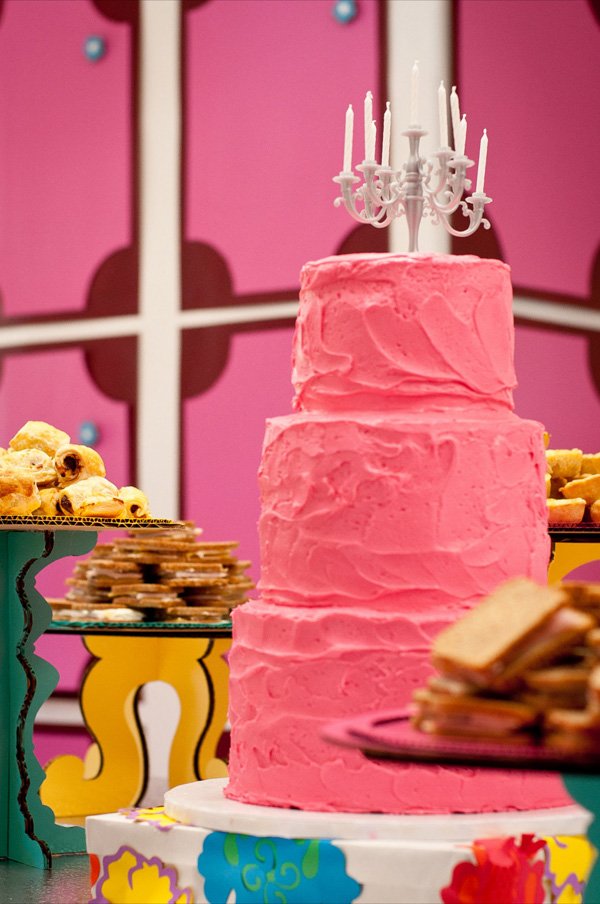 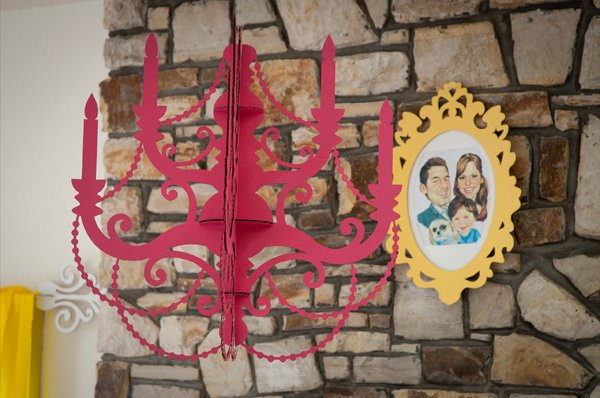 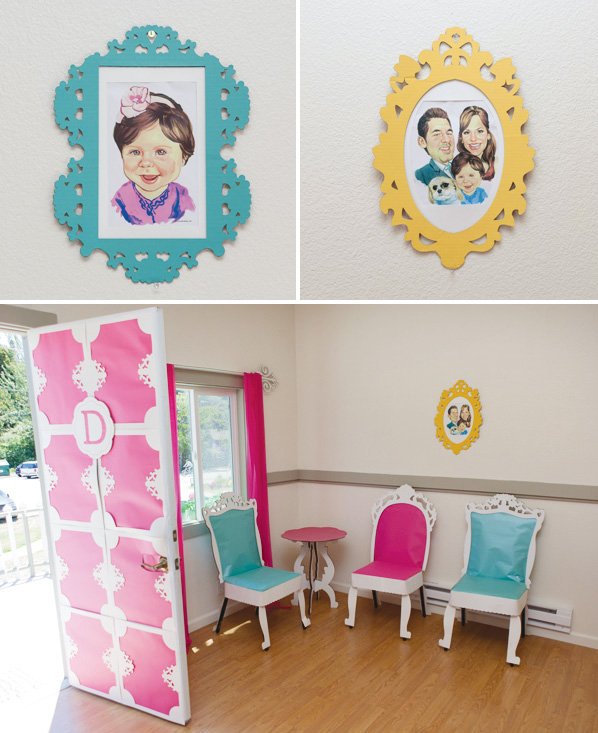 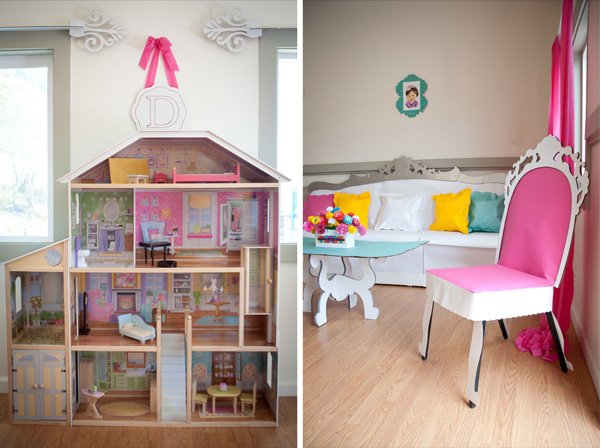 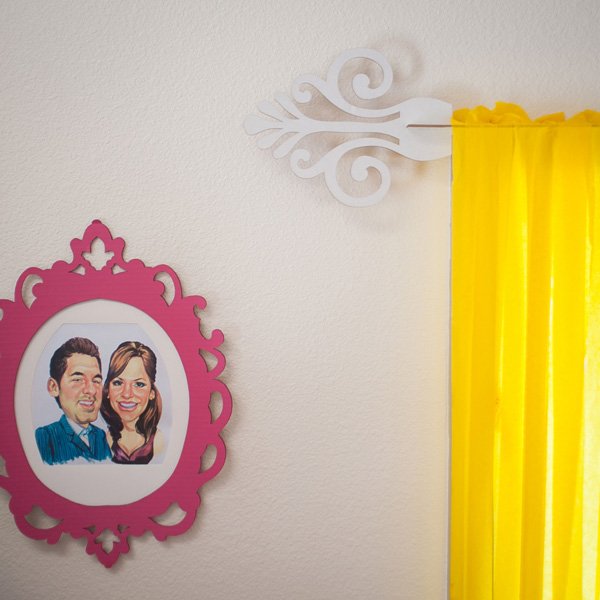 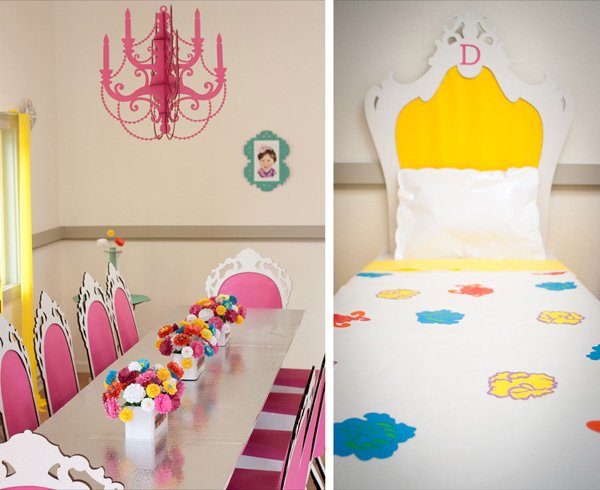 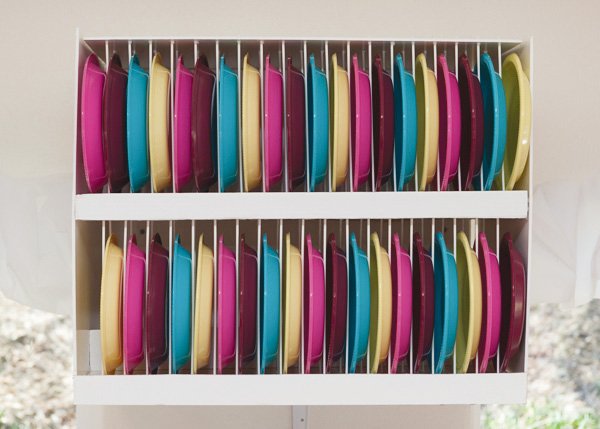 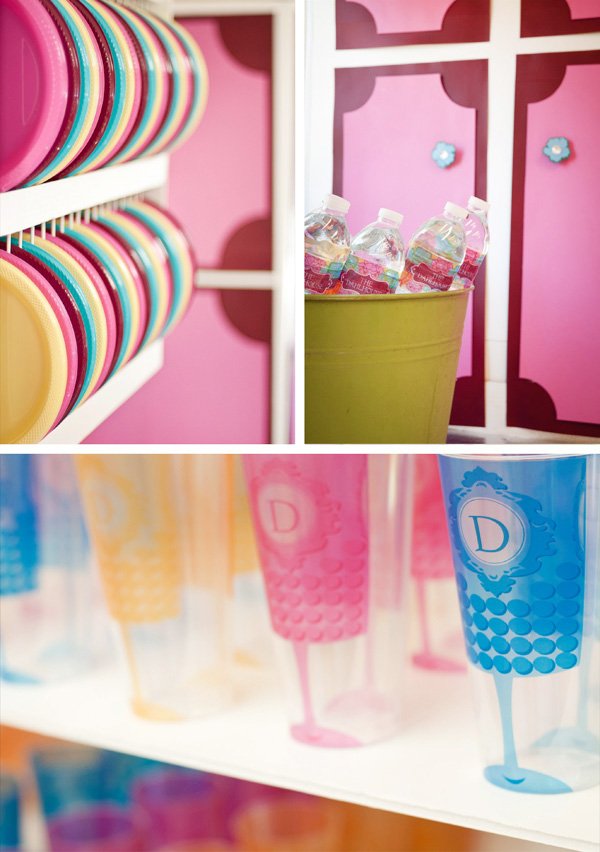 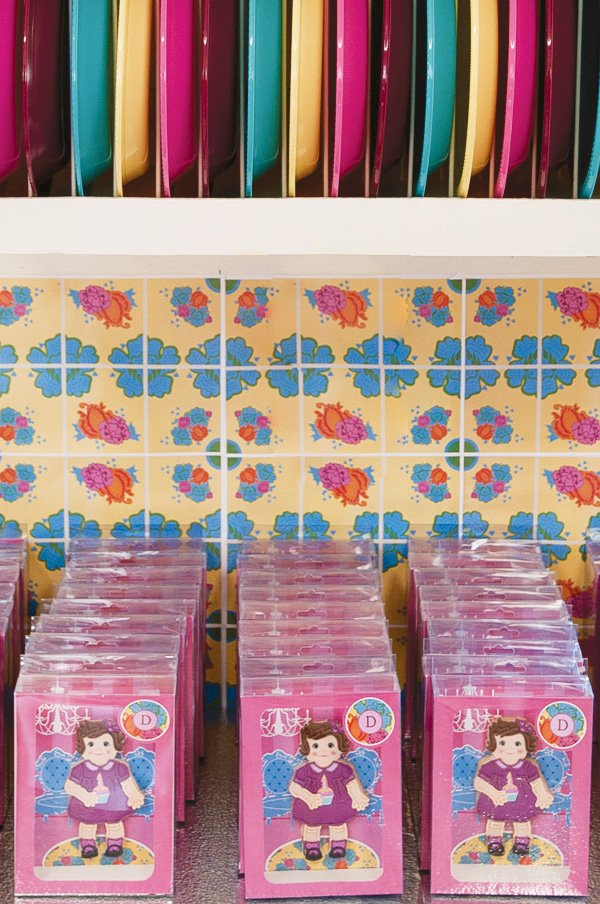 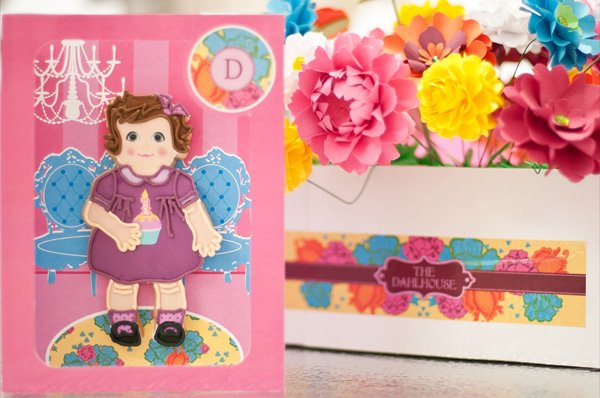 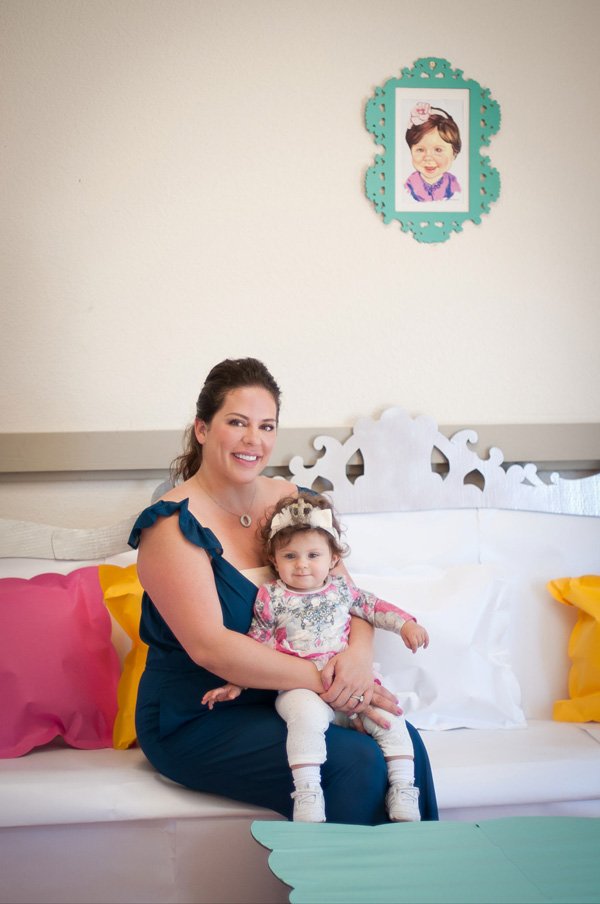 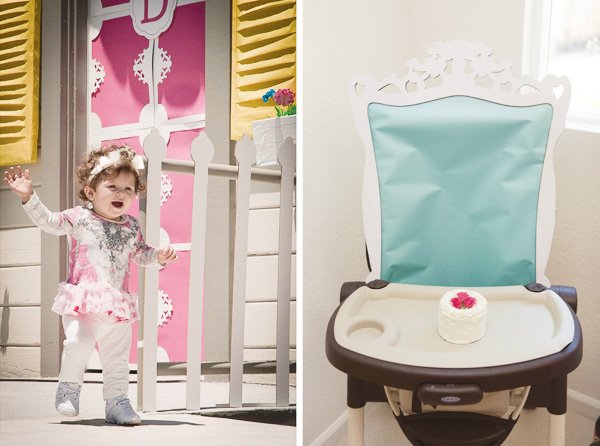 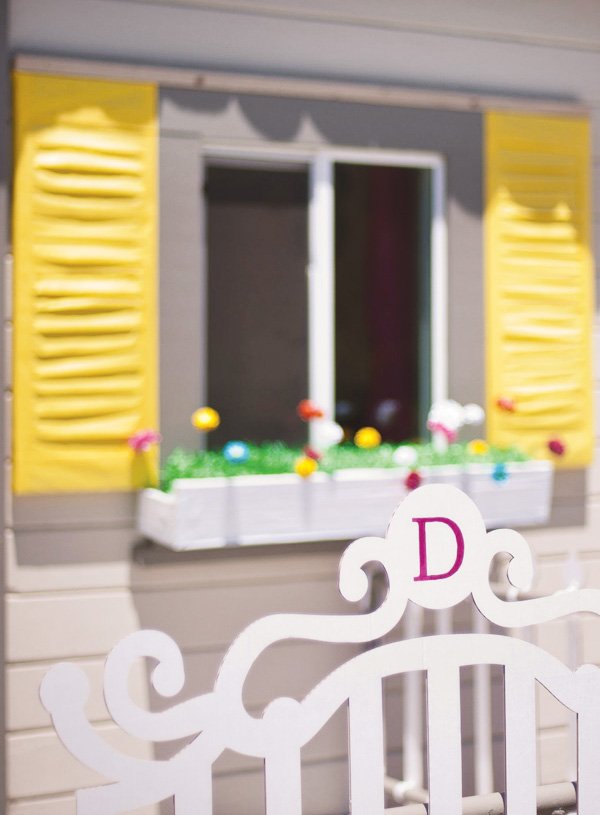 PARTY DETAILS, as told by Erin…

As an Event Designer, I am accustom to weddings and corporate events but being a new mom, I was quickly inspired through the eyes of my beloved daughter, Dahlia to bring something new to children’s parties.

Due to the economic times, I wanted to showcase a party that my clients could envision throwing for their son or daughter and translate the concept to any theme. I wanted to show how budget does not equate to a sacrifice on style and that a eco friendly event goes far beyond mason jars and burlap.

The concept started with the guest of honor , “Dahlia” who is called “Dahl” for short. A pop-up “Dahl-house” was designed in a Barbie Baroque fashion. Everything was fully functional and 100% paper based! The shingled roof was composed of hundreds of pizza circles, the exterior shutters were folded butcher paper, the curtains were streamers, chairs, tables and furnishings were all cardboard and the kitchen was mostly chipboard and paper. The favor was inspired to look much like the Birthday girl herself and was brought to life by Pastries and Petals and placed in a custom Barbie inspired box which featured a thank you verse on the reverse.

From the lollipop stick fabricated plate rack to the faux appliance cardboard facades, no detail was left out!

I selected The Old Town Hall at Del Rey Oaks Park for the venue because it came equipped with banquet tables and chairs to accomidate 40+ guests. My daughter’s name is Dahlia but we affectionately call her, Dahl so I knew a “Dahlhouse” theme fit the bill. I wanted the environment to feel as if you were a part of a Barbie/Baroque pop-up.

I sourced my most talented vendors and staff to support my creative vision and bring this never before theme to life! The insanely gifted and talented Debbie Denomme of DebDen Designs worked with me tirelessly for months crafting 40+ stunning pop-up invitations that really set the tone for the event.

I then worked with the always amazing Anders Ruff to create a repeating pattern for the event that was used to accent everything from the favor boxes to the kitchen back splash!  Additionally, Anders Ruff worked with me to create faux Baroque style stemware and tumblers for the guests.

All of the Baroque cardboard elements such as the chair backs, chandelier and sofa frame were cut by laser cutting extrodinaire, Haley Tessier of Seequin.  Everything was constructed of 100% cardboard.  The appliances were cardboard props that were just facade images. I then constructed the counter tops from insulation sheets. I made the plate rack from lollipop sticks that I punctured into cardboard and the curtains were tissue paper. The kitchen cabinet knobs projected out and were die cuts from your floral pattern.

The kitchen back splash was an Anders Ruff printable pattern that I just printed and used double stick tape on to the walls.

Also the exterior roof was composed of cardboard pizza circles that I hot glued and suspended. The shutters were butcher paper that I just folded, the window boxes were boxes covered in white duct tape for a wood grain texture.

The multi colored paper flowers that graced the dining room table and exterior window boxes were compliments of Chantal Laroque of Dragonfly Expression.

The guests each left with a unique memento as well. I worked with Carmel’s finest bakery, Pastries and Petals to create a custom cookie that resembled Dahl. They mounted each mouthwatering goodie into the custom Barbie inspired box and with a sweet treat like that, who else but Pastries and Petals to cater the event and bake a delicious 3 tiered pink cake.

Many elements of the party were handcrafted by myself such as the plate rack which was composed of 12″ lollipop sticks and the cheerful pink shingled roof made entirely of layered cardboard pizza circles!

Of course an event like this requires a supportive team and my all-star team who faithfully get’s down and dirty with me on a regular basis consists of Lead Florist, Pamela Mielke, Operations Manager, Molly Williams, Assistant, Marianne Haas and last but certainly not least, my supportive, loving Husband, Dr. Shawn Borges D.C.

The important part of this whole concept was that every single tiny detail and element of this event was entirely crafted from a paper based material and every elements was fully functional.