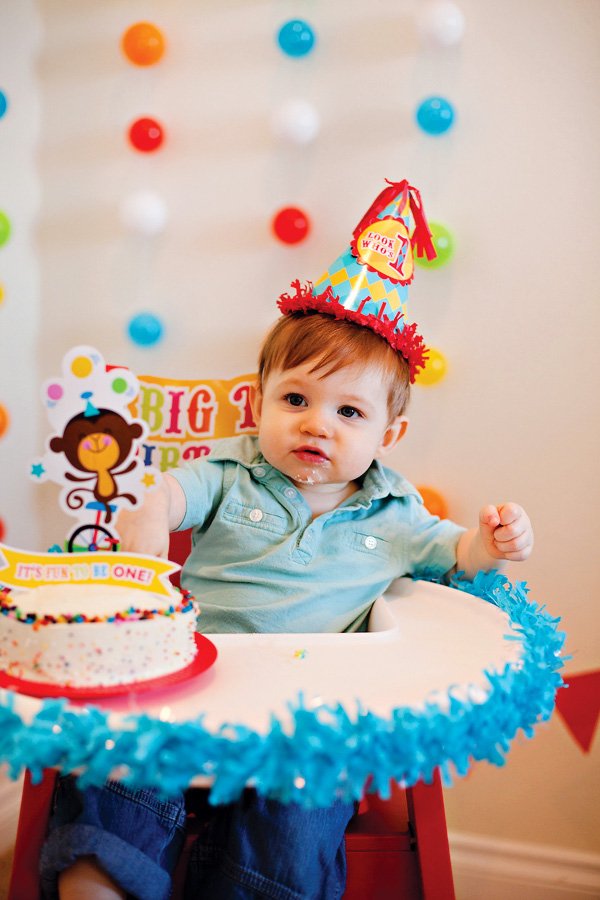 I designed this Big Top First Birthday Party for Fisher-Price a while back, and I’m super excited to finally share it with you!

This theme was inspired by their adorable Lion, Elephant, & Zebra Clicker Pals™. These toys are seriously just as CUTE as can be. I mean, circus-inspired baby animal toys with sweet faces and rainbow feet? Yes, please! ;)

There are lots of different ideas to take in here, from centerpieces and homemade desserts to DIY accent decor. Speaking of which, my 2 very favorite DIY projects from this party are both pictured in the image below… the Ring of Fire centerpiece (more on this later) and the Circus Animal Pedestals, which are made from $1 Ikea pails turned upside down + colored duct tape! 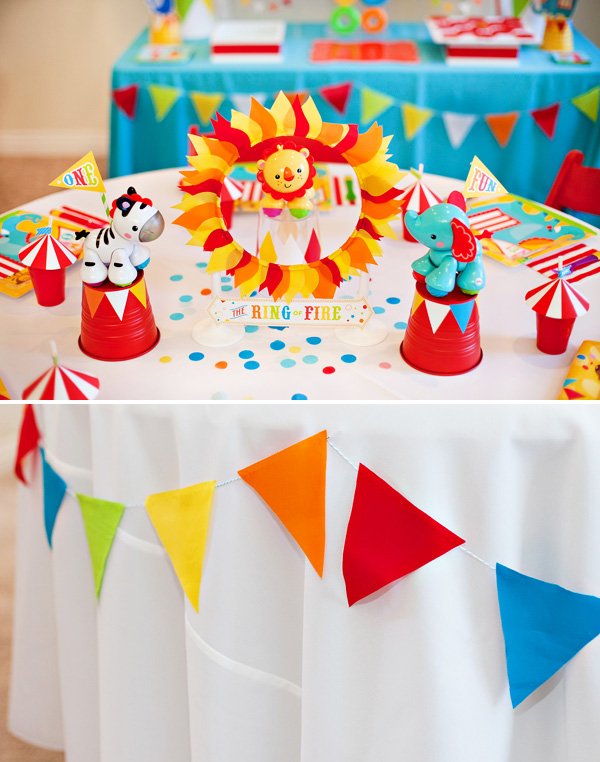 Rainbow triangle bunting (in various sizes) also played a big role in this party. I opted for bright fabrics with a shiny finish – kind of like a “kite” material– to best match the look of the toys.

The fabric bunting was pinned & swagged around both the kids table and the dessert table: 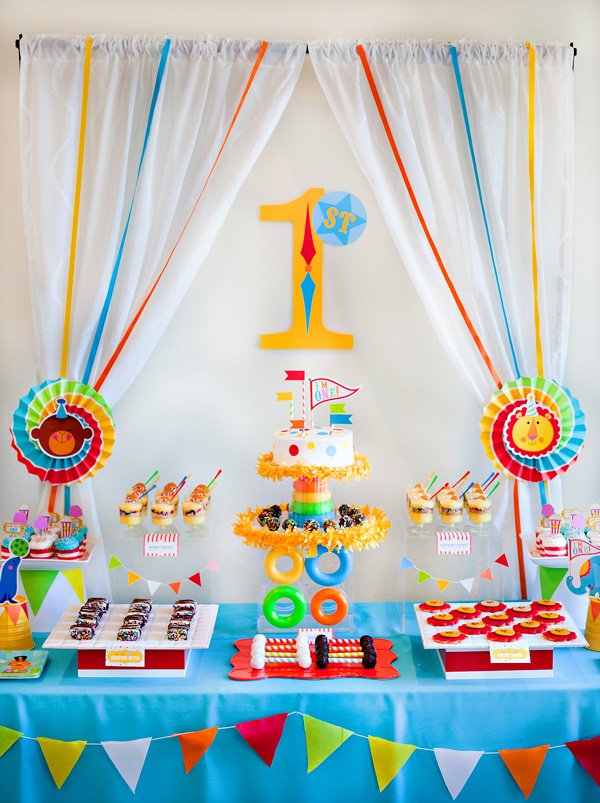 The dessert table backdrop was made from white curtains ($12/pair at Ikea) + a few long strands of colored ribbon. I originally wanted to make “curtains” entirely out of ribbon for this backdrop, but quickly realized that was going to cost a small fortune. This was much more doable. :)

We also made a big foam core “1st” Sign to put in the middle of the curtains. It was designed to match the “1” in the circus partyware collection. 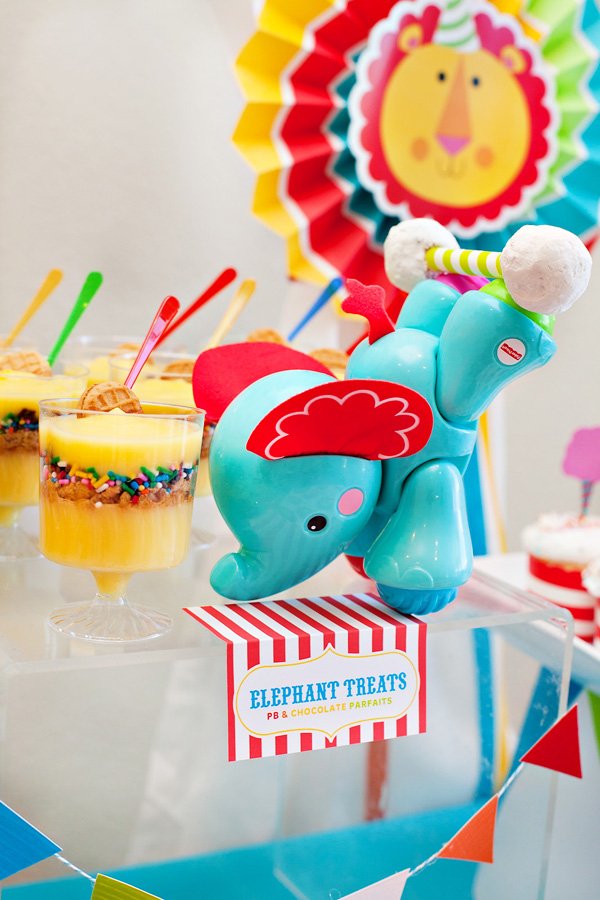 All of the treats were a combo of grocery store-bought and homemade, but my favorite one was also the very easiest: “Strongman Barbells” made from donut holes + jumbo stripey straws! Even the Elephant Clicker Pal had some fun with these (see above). ;) 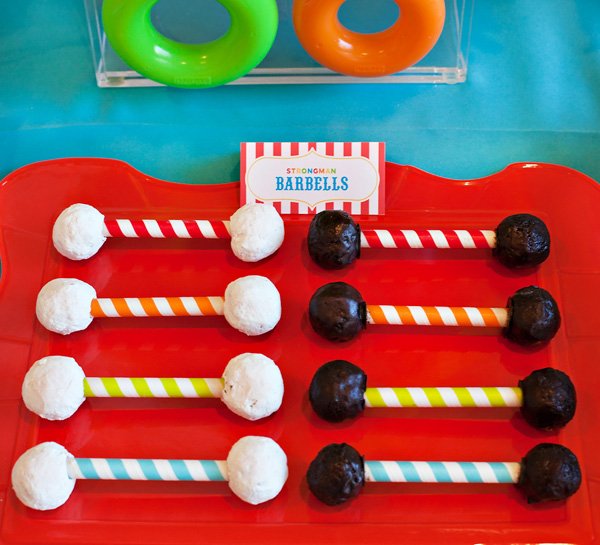 Regular sized stripey straws were also used as sticks for printable decorative flags. I attached them to the toy animals with a strip of colored duct tape: 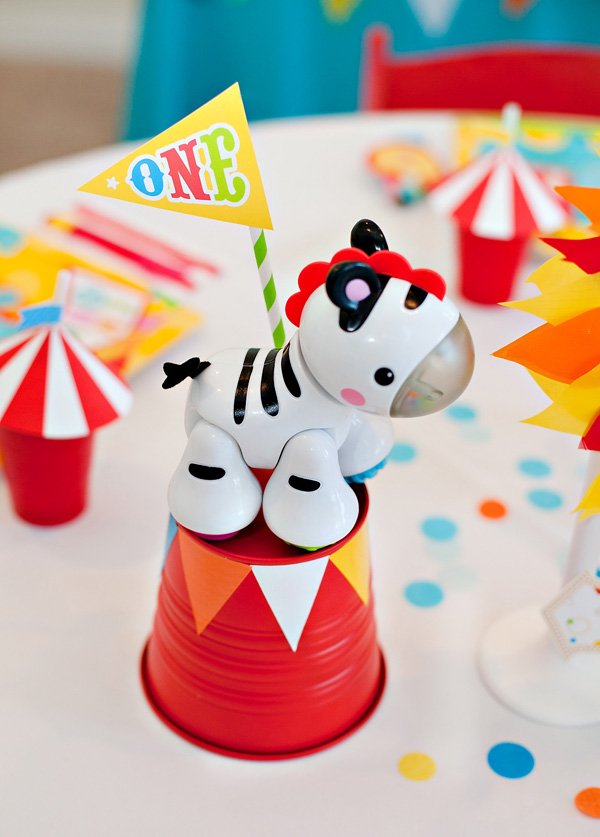 Here’s a closer look at the aforementioned Ring of Fire Centerpiece… do the stands look familiar at all? 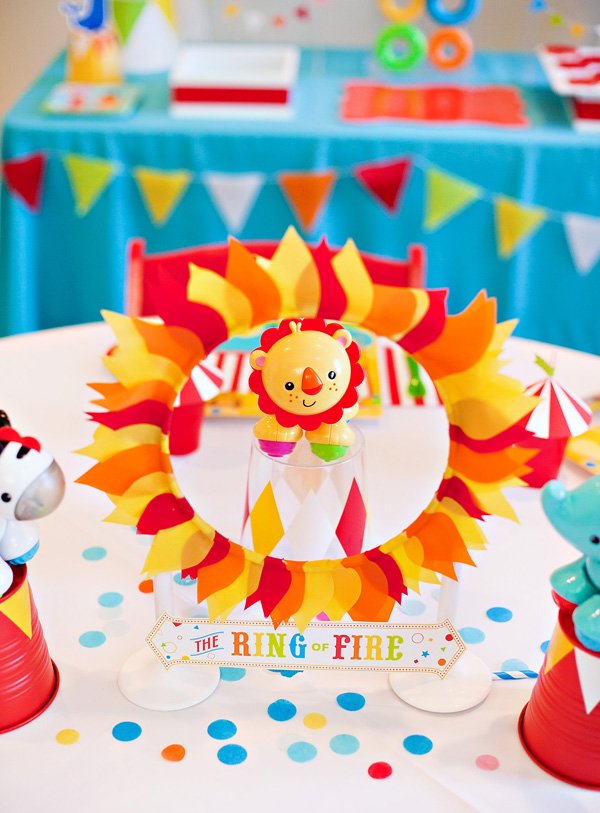 The stands are actually made from the bottom portion of Ikea’s $1 Tolsby frames + a really thick wooden dowel! I spray painted the dowels white to match, then hot glued them to the back of the “fire” ring.

The Lion Clicker Pal toy is sitting on an upside down clear plastic cup (purchased at Party City). I added colored duct tape “diamonds” to the cup to dress it up a bit.

These DIY Big Top Cups were another fun project. They’re made from a printable  “tent top” template + kid-sized “to go” plastic cups (purchased at Target). 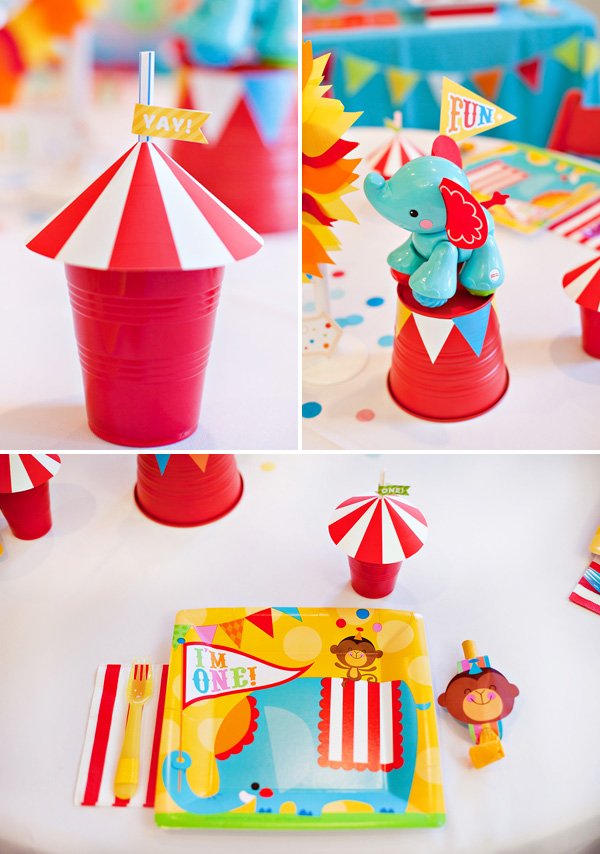 Tissue-fringe is always a go-to for inexpensive embellishments. I used glue dots to attach short strips of them to the wooden folding chairs, as seen here: 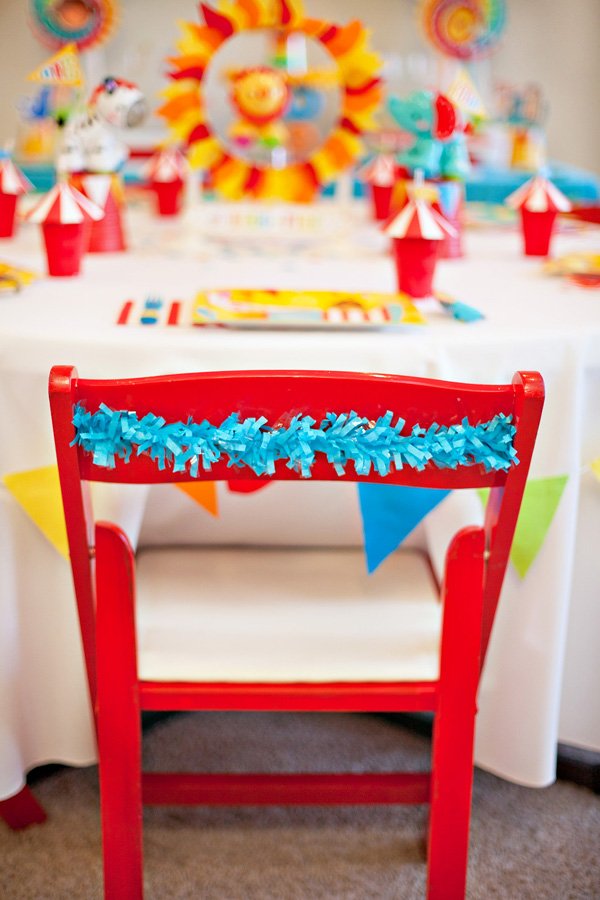 You’ll see tissue fringe accents used throughout the rest of the party too, including in this Elephant Mask Photo Prop, which was designed to match the Elephant Clicker Pal toy and his signature big red ears! 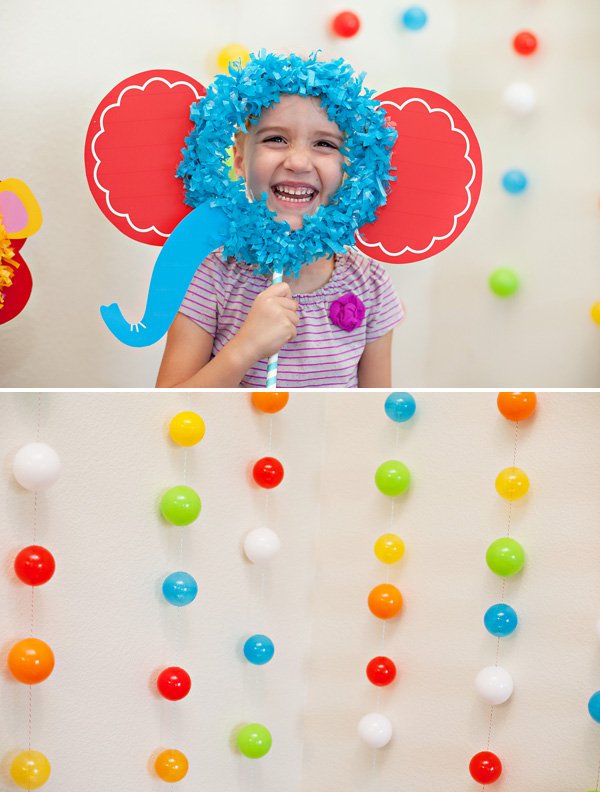 I’ve been having a lot of fun with Plastic Ball Garlands lately, and for this party I hung them vertically to create a fun photo wall backdrop! Very fitting for a toy-inspired party, right? ;) 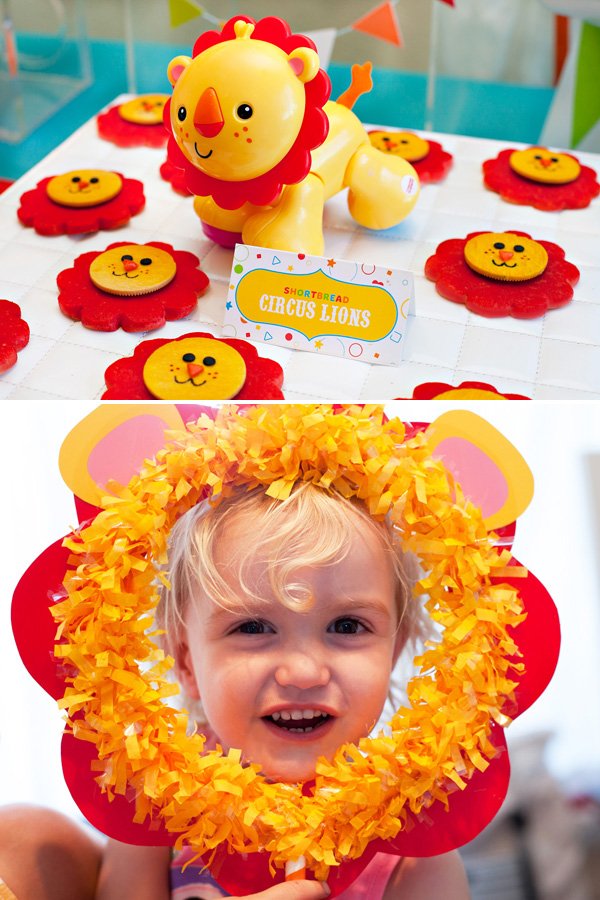 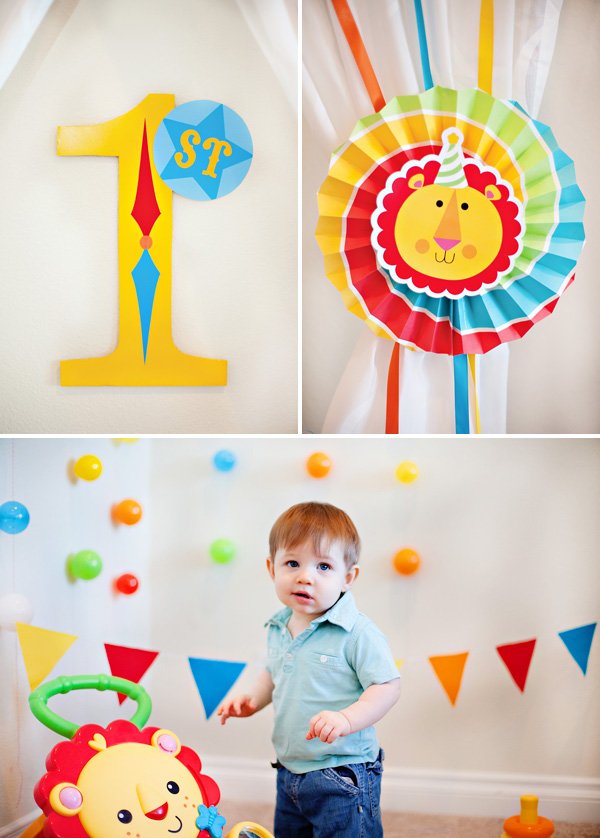 For the main party cake, which was also the centerpiece of the dessert table, I went super budget-friendly but still love how it turned out! 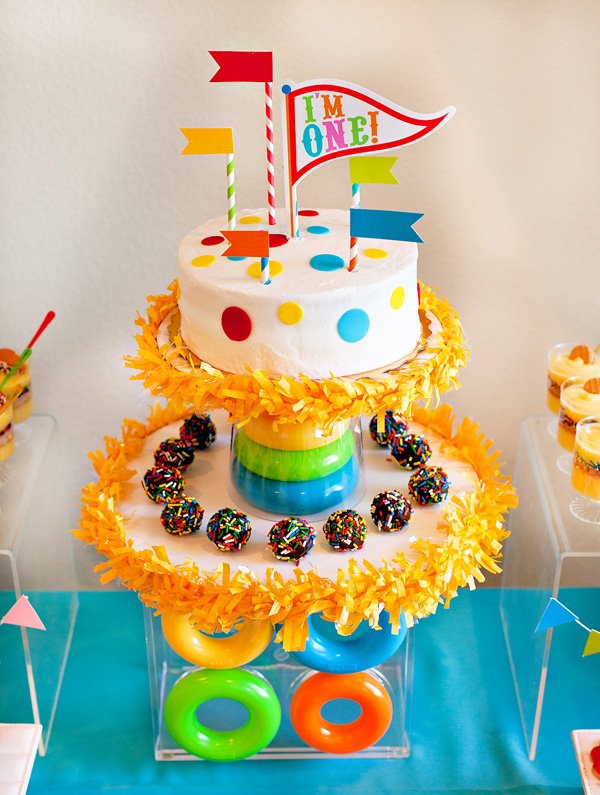 This was a $9 grocery store cake… I asked them to keep the frosting simple & add fondant circles in red, aqua, and yellow. Colored duct tape “flags” + stripey straws made for a fun DIY cake topper, and Rock-a-Stack® rings stacked inside an upside down jumbo plastic cup created a fun pedestal for the cake stand.

I rolled store-bought chocolate donut holes in sprinkles for the 2nd tier of the stand. The bottom acrylic portion of the stand is actually a wine rack (from Target) with more Rock-a-Stack rings crazy-glued to the front. (Note: you have to use crazy glue for this…  hot glue doesn’t stick to the rings for some reason!)

Didn’t want the cute little zebra to feel left out, so she got her own “Rainbow Zebra” Brownie bites… the sprinkles are inspired by the tiny little rainbow balls inside the nose of the toy. 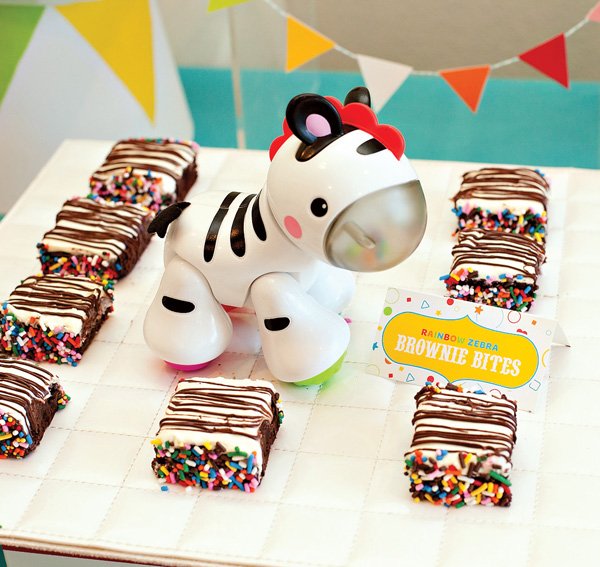 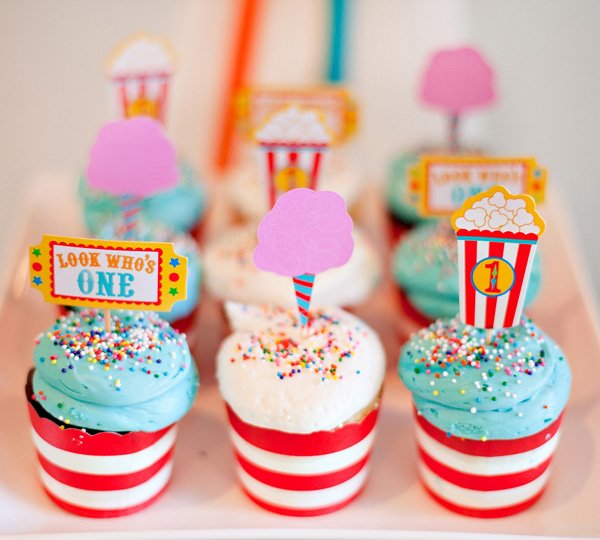 These circus banana parfaits are quick & easy too… just layer banana pudding with crushed cookies and rainbow mini chips or sprinkles. I brushed mini Nilla Wafers with a stripe of Karo Syrup & rainbow nonpareils for a colorful garnish. 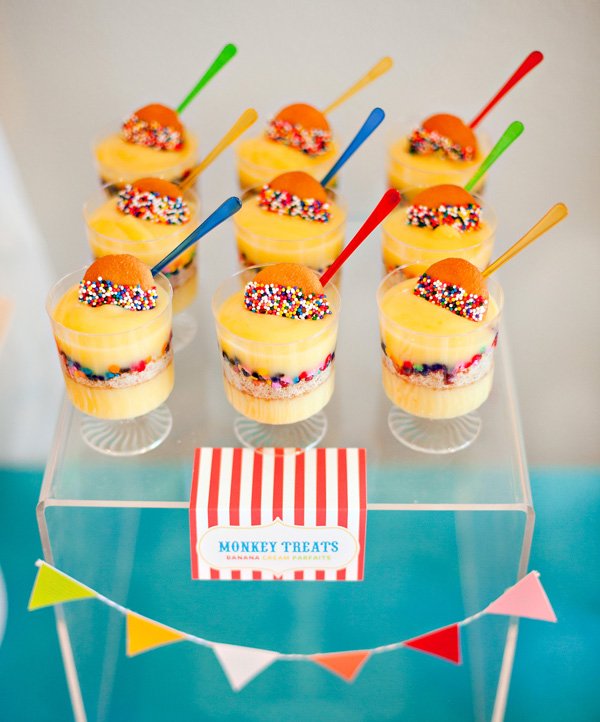 The mini rainbow bunting pictured above is made from colored duct tape. Just put strips of duct tape onto cardstock then cut small triangles out & hot glue them to baker’s twine! 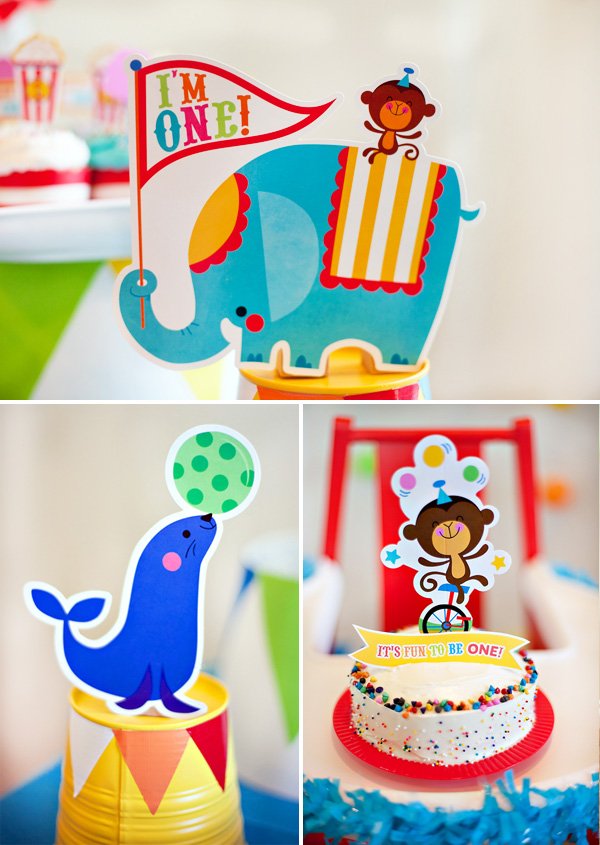 Of course it wouldn’t be a first birthday without a SMASH CAKE! This homemade 6″ rainbow smash cake is decorated with a border of rainbow mini chips + some nonpareils. I topped it with one of the paper cut outs from the Fisher-Price 1st Birthday collection + a small printable banner I designed. (You can download it on the FP site.) 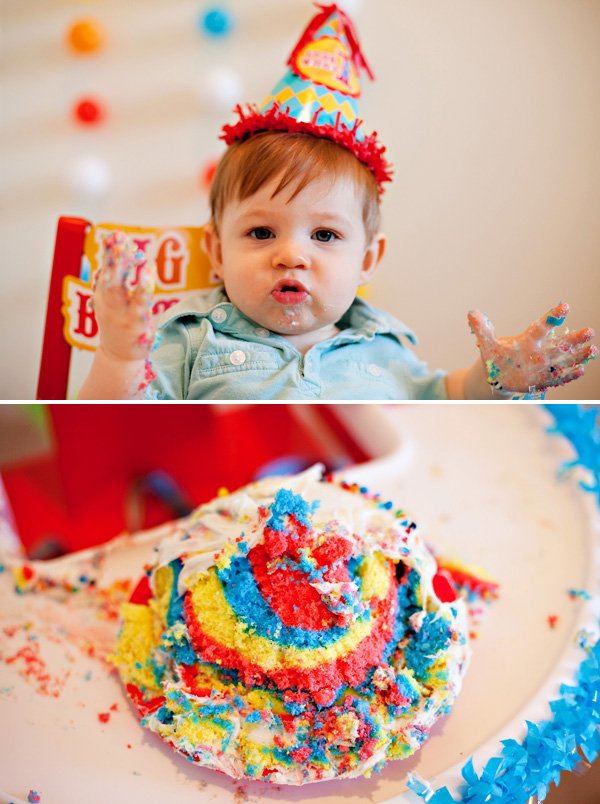 For a fun favor/activity idea, we set up an “Elephant Adoption Station” with plush elephant toys from the FP Party City collection… 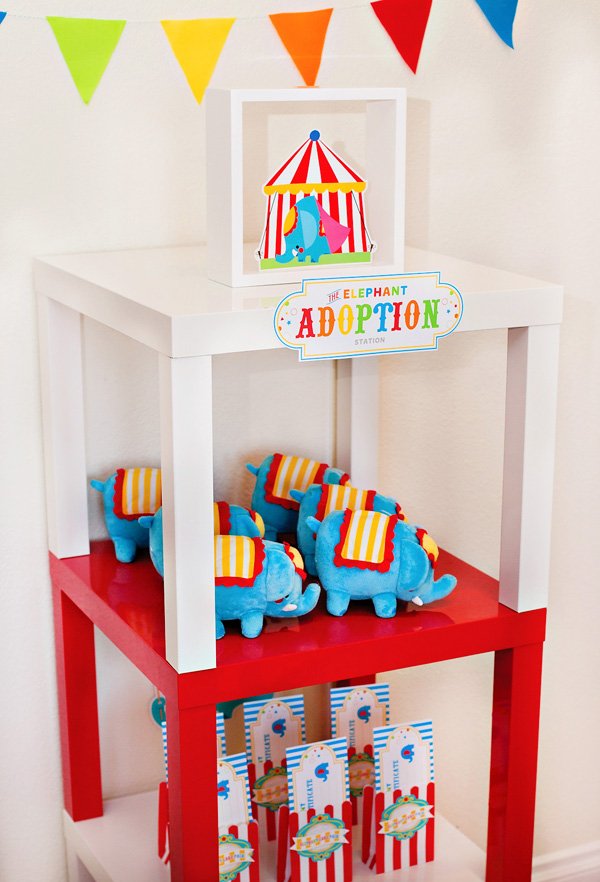 I also designed some “Elephant Adoption Certificates”. Macy named her elephant Lollipop. I have no idea why, but thought it was cute. :) 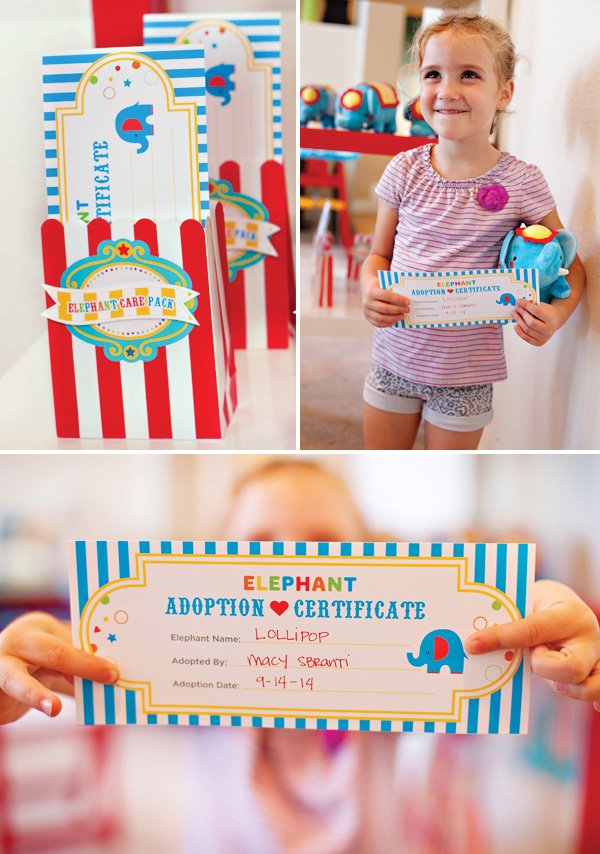