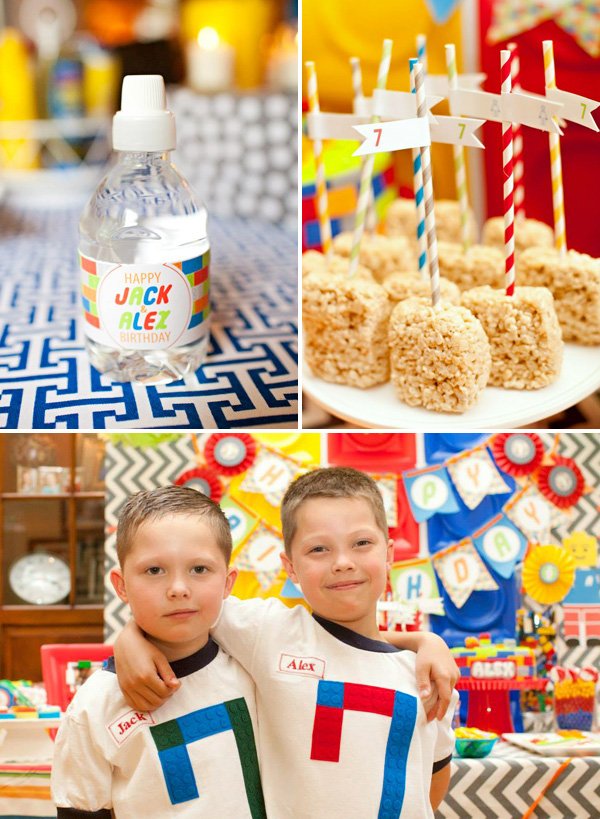 When your babies turn 7, it’s about time they get a big kid party! Valerie Gimre of Charming Touch Parties created this Colorful Lego Themed Party for her twins Alex and Jack with printables by The Paper Plume. I’m lovin’ all the patterns, colors, and creative ideas for real parties at home! (And for more Lego Inspired Party Ideas go here and here!) 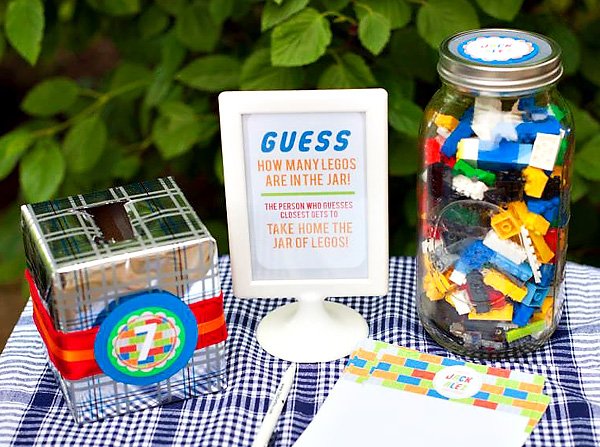 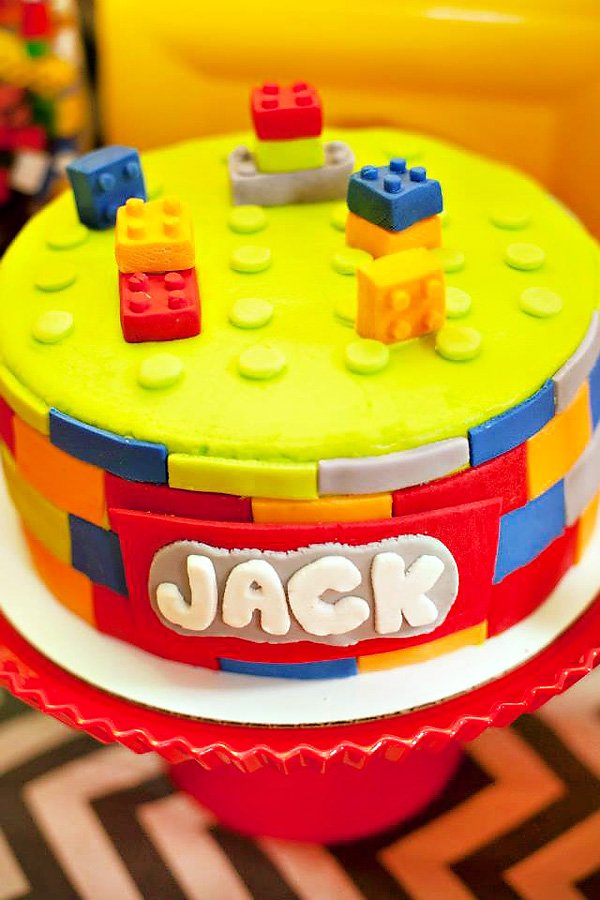 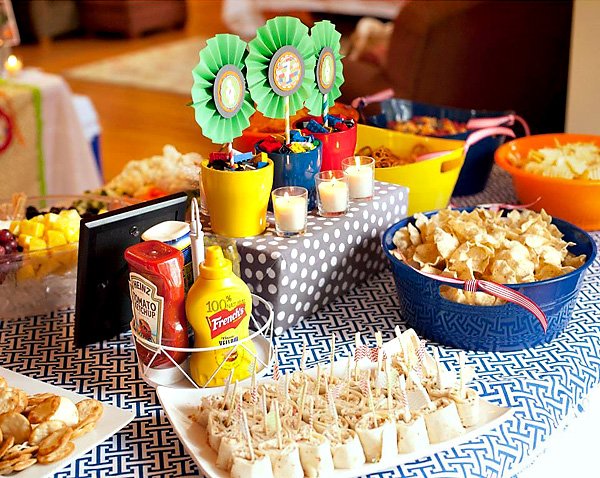 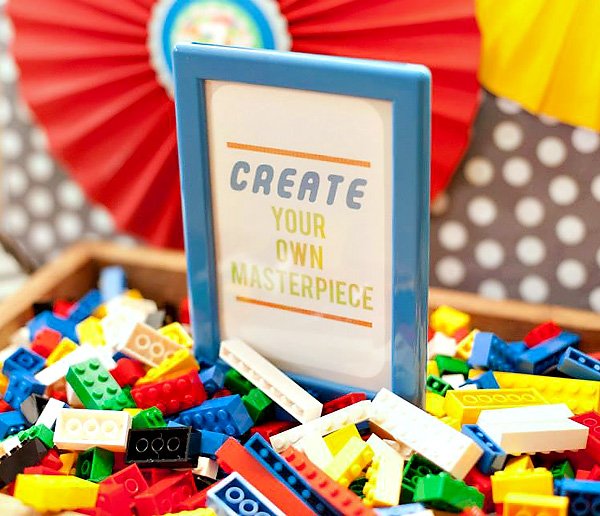 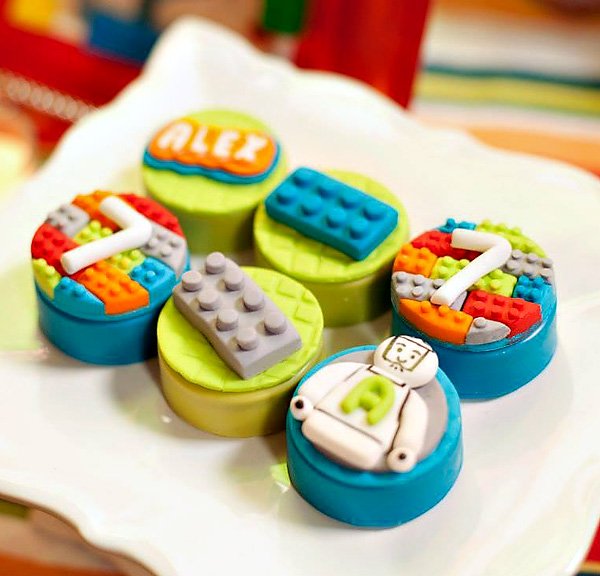 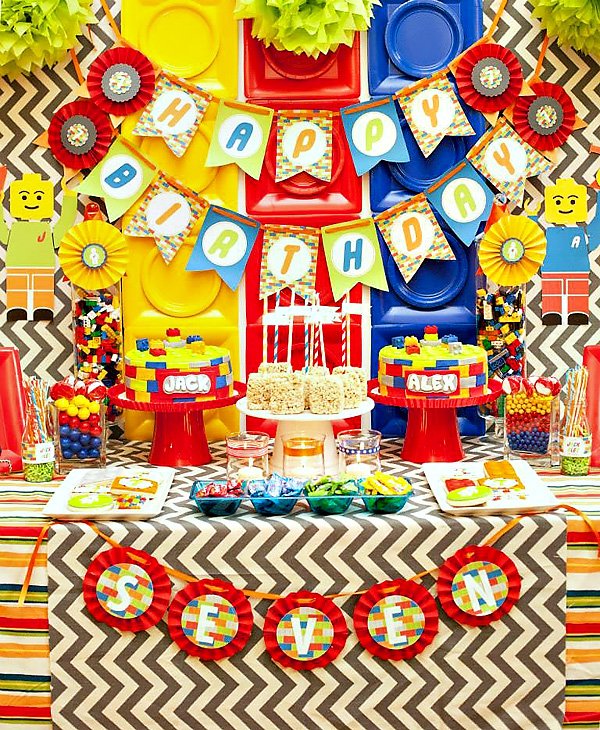 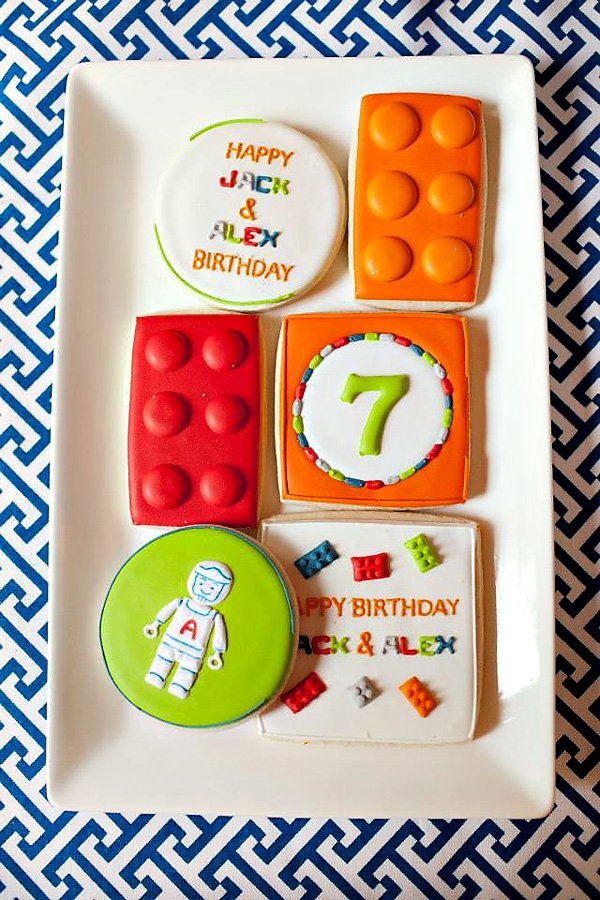 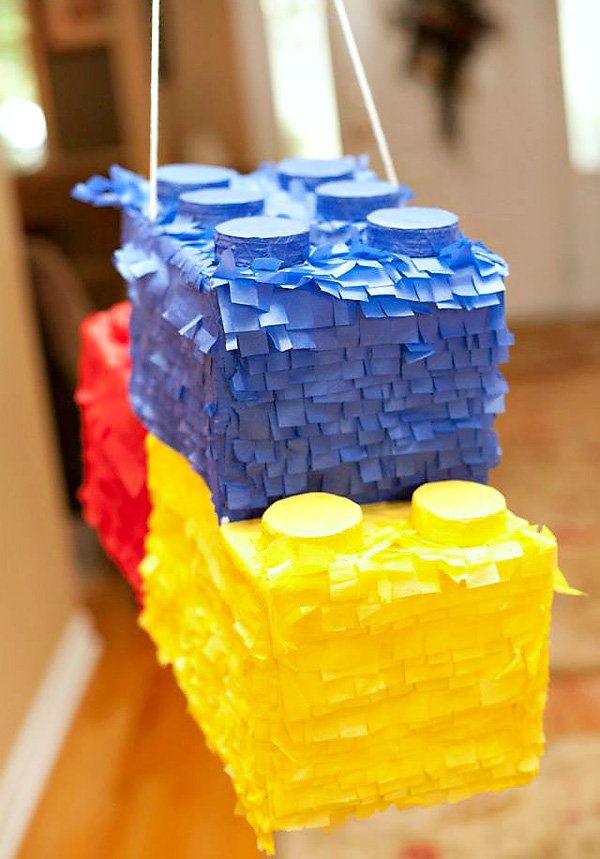 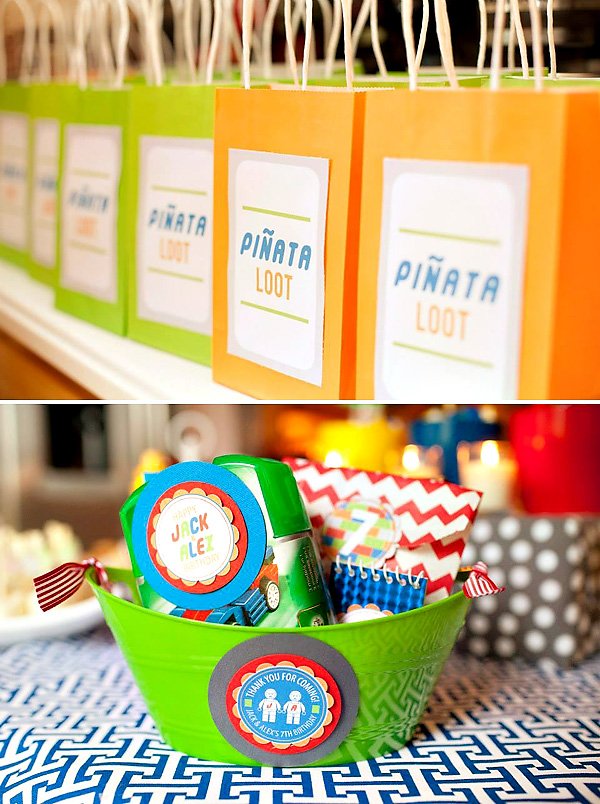 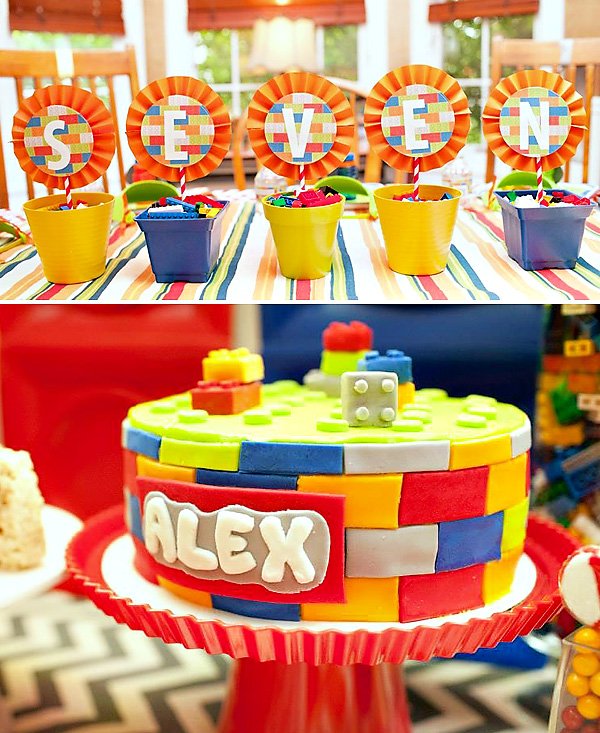 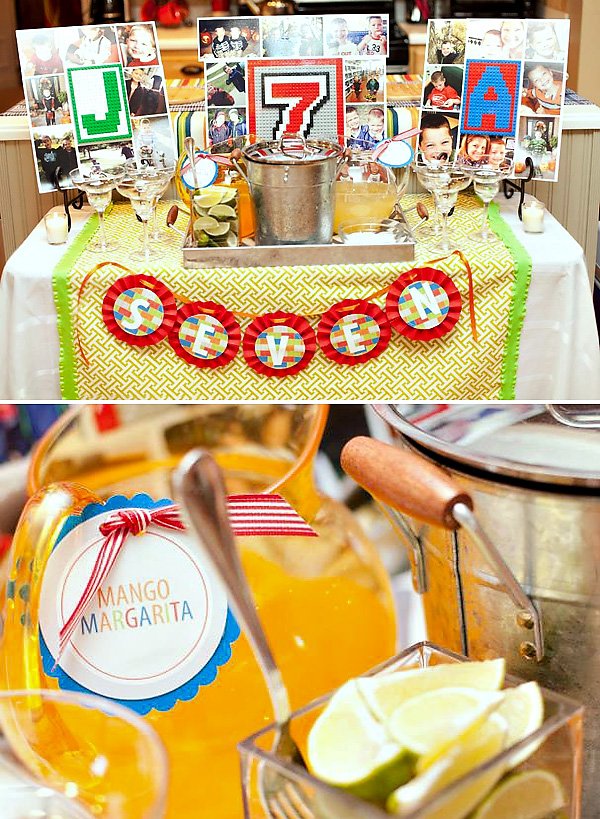 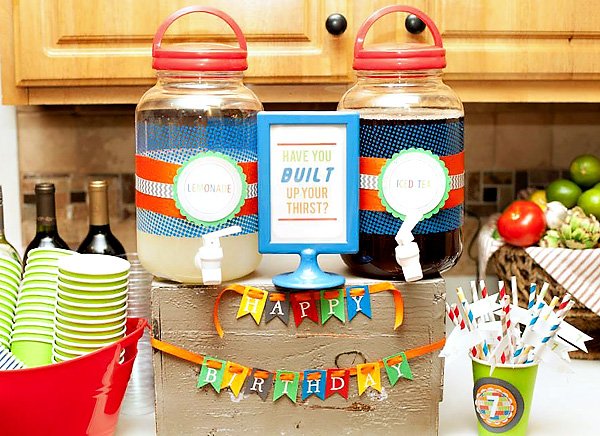 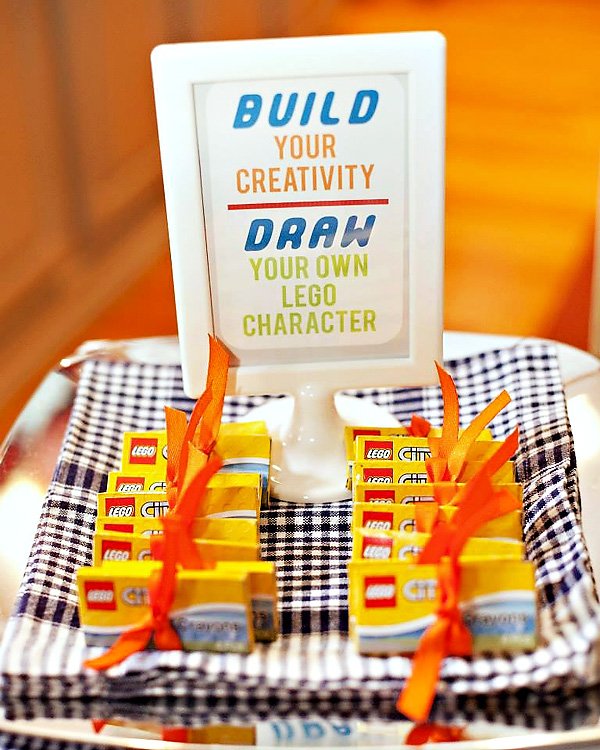 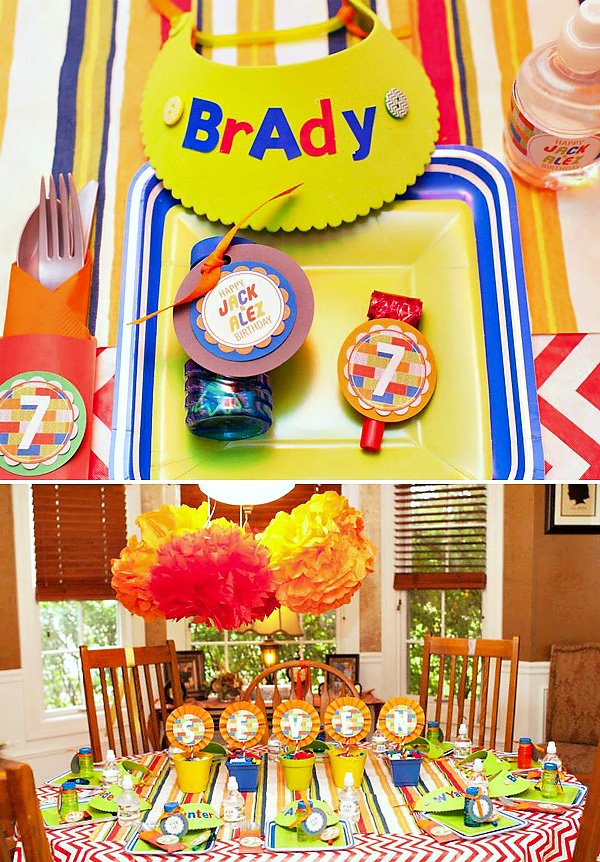 PARTY DETAILS, as told by Valerie…

My twin boys turned SEVEN this year.  My “babies” aren’t babies anymore.  The toddler years are over.  I don’t even think you can really qualify them as little kids anymore.  Seven seems to be THE BIG TIME — the entrance into the “big kid” years.  They are riding bikes without training wheels, going to school for entire school days, and are blossoming into little social butterflies.  And like so many “big kids”, my boys are Lego-crazy!   Deciding on ONE theme isn’t always the easiest process with twins, so we were just thrilled when Lego seemed a mutual party theme winner.

In my party stylist quest to make their celebration original and modern, we decided for a more colorful approach to Lego. I enlisted the creative assistance of The Paper Plume to create some simple and modern printables.  We added gray and orange to the traditional Lego color palette and played around with a variety of modern fabric patterns.  We kept the building concept alive with angular lines and graphic details.  My dessert table backdrop is a blend of modern fabric and building block details. Paper rosette bunting adds a playful touch to front of the table and were incorporated again in various places throughout the dessert table and rest of the party.  Our dessert table included two modern Lego block cakes, custom coordinating chocolate covered Oreo’s, wonderfully custom boutique cookies and other fun colorful candy and treats.

We created a memory wall of their 7th year — LEGO style.  A large J (for Jack), 7 and A (for Alex) were created out of Lego’s and surrounded by photos of each boy individually and together throughout the previous 12 months.  It was a pretty special way to reflect back on their past year of life.

Since this party was held in mid June, our food was BBQ inspired.  My husband grilled up hamburgers and hot dogs, we had a variety of summer sides and salads, iced tea and lemonade and even had a margarita bar setup for the adults.

For activities, we created a “Create Your Own Masterpiece” activity and each kid was given free range to a huge bucket of Legos and a specified amount of time to build.  The kids were allowed to pair up with a friend and afterwards, each child was allowed to announce what they made.  This was such an easy and successful activity.  The kids loved being able to build with a friend and show off their creations. Next up, we had a fun “Build Your Own Creativity” activity.  Each kid was allowed to take a basic Lego coloring form and color it in to their liking.  I hung up the pictures throughout the kitchen during the party so each kid could see their work.  Our last activity was a Lego pinata — always a crowd pleaser!