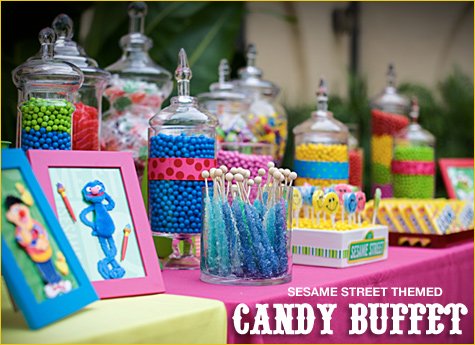 Here are some photos from the Sesame Street candy buffet that I created for Ashby O’Dell’s birthday party last month… which was so much fun to work on! You’ll find all the details below for this particular buffet, in case you want to create something similar for your own parties…

All of the candy is from Sweet Factory – you can buy in bulk on their website! I really wanted to play up the bright colors – just like you see in the Sesame Street characters. I was told that Ashby loves chocolate, so the first thing I ordered was candy-coated Decorator Sixlets in yellow, blue, lime green, red, and hot pink. You can buy them in 10-lb or 1-lb bags. (I used about 2-3 lbs per jar at a time, depending on the size.) 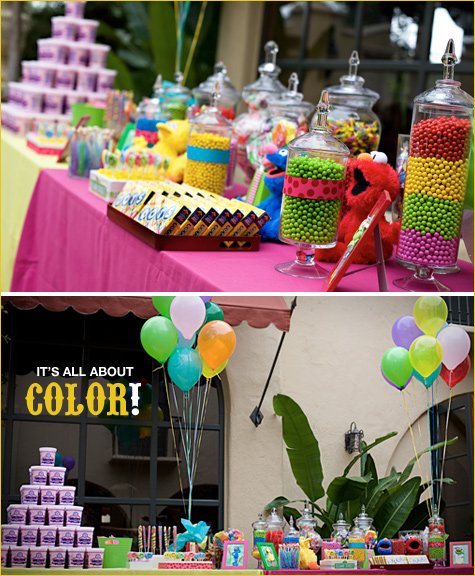 Other candies in the buffet included: Jolly Ranchers, boxes of Dots, Saf-T-Pops, Alphabet Gummis,  Smiley Happy Face Lollipops, Round Whirly Pops and Flower Lollipops (displayed in colorful Blumeboxes), Giggle Pops, Gummi Centipedes, Rock Candy Sticks, Red Swedish Fish, and individual buckets of Cotton Candy displayed in a pyramid. The final buffet was 12-ft long! There were favor bags on the table so that guests could make their own take-home “favor bag” with all of their personal favorites.

LOTS of candy, I know! But there were about 100 guests at this party – a little more than 1/2 of which were adults – so we needed quite the mass quantities. You can definitely do something similar to this on a much smaller scale though! (Here’s an example of a smaller candy buffet I did last weekend for a 16-person baby shower.) 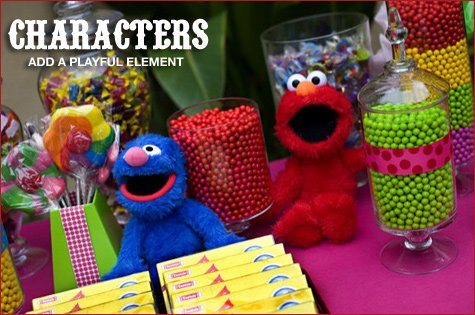 Plush Sesame Street characters like Elmo, Grover, and Big Bird sat between some of the candy jars and helped to play up the theme. I also found some 3-D Sesame Street Stickers at a local scrapbook store, framed them in bright, inexpensive frames from IKEA, and set those throughout the buffet.

Balloon bouquets displayed in colorful Blumeboxes added a nice pop of color to the tables as well! 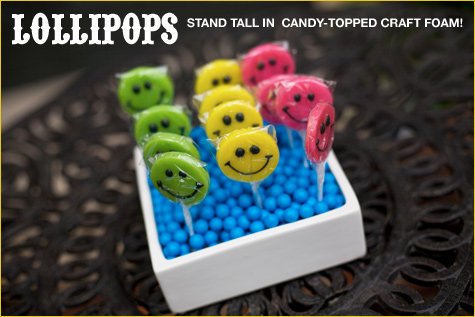 It’s fun to creative with lollipop displays! You can use white craft foam to make them stand up in trays and shallow containers like the white ceramic vase pictured above. Just cut the foam to size and make sure it’s a little bit shorter than the container. Stick the lollipops in, then pour on a a layer of candy or popcorn to hide the foam.

There were several of these types of displays (featuring both small & large lollipops) on the candy buffet and all throughout the party – they make great table centerpieces too! 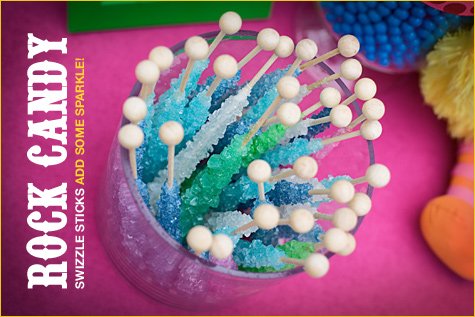 All of the candy jars were purchased at Home Goods for around $7 – $20 each, depending on the size. (They were about 1/2 the price at Home Goods from other places I saw them!) Embellishing some of the jars with a simple band of color-contrasting ribbon is super easy to do and makes a big difference in the overall look! 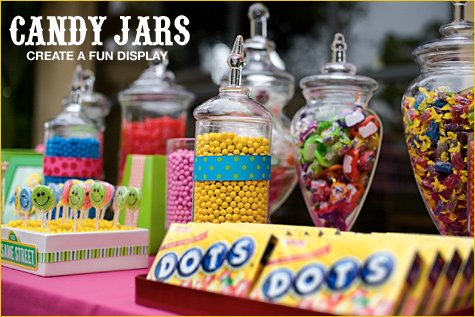 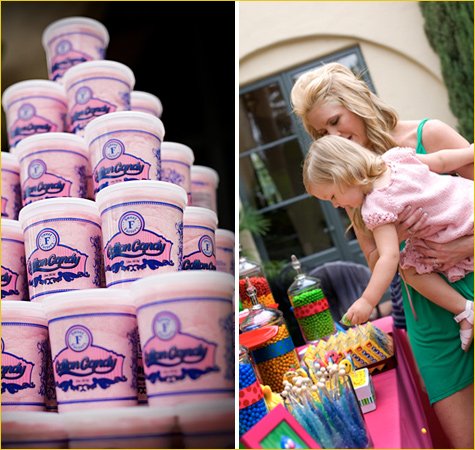 Here’s a fun shot of  The Jumpitz – the kids group that performed at the party (and did a great job!) – goofing around at the candy buffet. 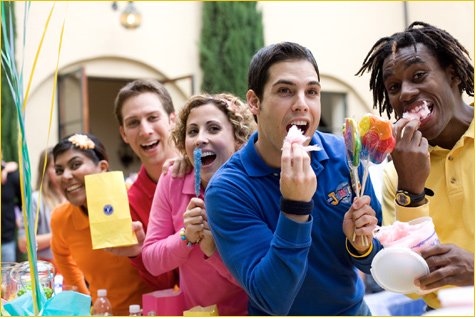 For more pics from this party, check out the Facebook Album. {Complete details from the entire party will be available in the Party Themes section soon!}

Special thanks to Jayneoni Moore for asking me to style this party – and to photographer Gina Lee for the fabulous photos!