Skip to content
Parties for Girls, Styled by Jenn 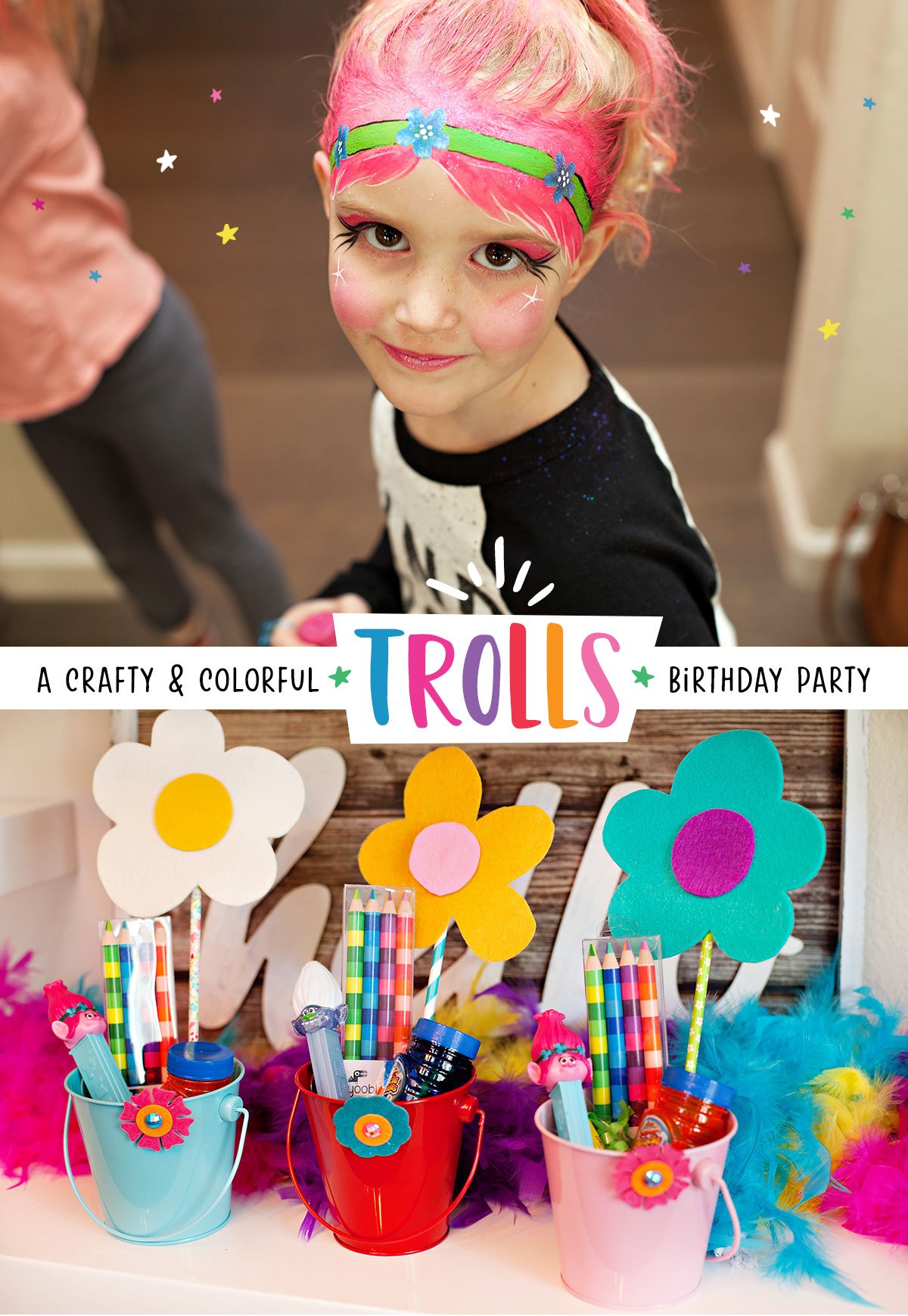 I just found out there’s a new Trolls movie coming out in April. 🌈✨🤗🎤 Which means there are going to be lots of little movie fans that want it for their birthday theme!

So…. it feels like a good time to *finally* share my daughter’s Trolls birthday party from a few years ago, in case you’re on the lookout for party ideas. This was her 5th birthday and she’s turning 8 in 2 weeks, so it’s been a little while. 😳😂

The ideas are still super relevant for any Trolls party though. I was super inspired by the bright colors and felt textures in the movie and went for a colorful, crafty feel. My main decor/theme elements were felt, craft poms, tissue paper, and LOTS AND LOTS OF GLITTER, of course! 😉 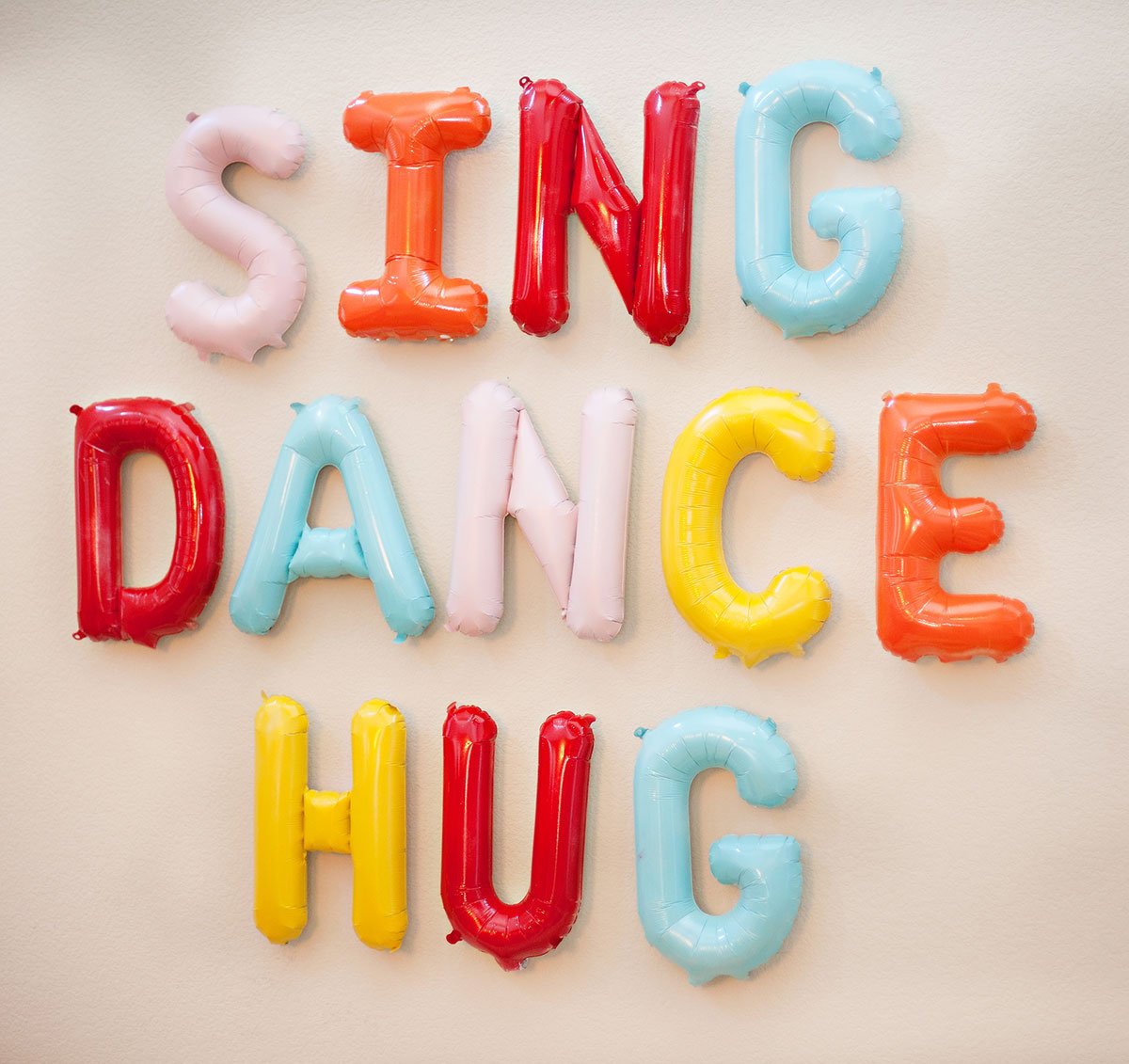 If you’ve seen the movie, then you know that Poppy and crew are always ready to DANCE! and HUG! and SING! So I used balloon letters to put that little mantra on the wall. 🎉

I wanted the letters to be rainbow though, so I spray painted them. 🌈 Not gonna lie – this project was kind of a pain and took a few coats. But still worth it in the end I think. 😉 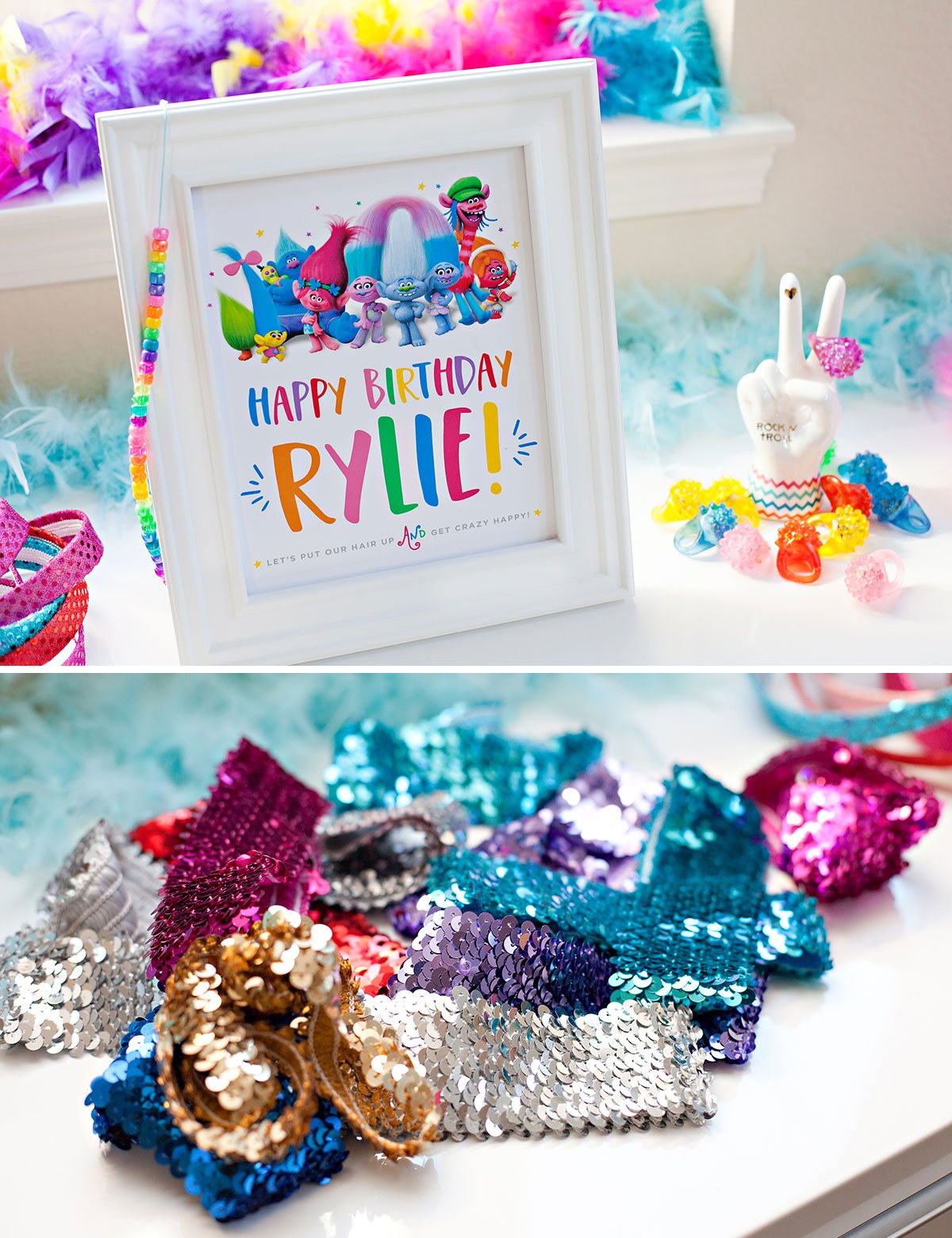 There are lots of high resolution Trolls graphics online, so I was able to whip out a couple signs for this party. Since I don’t own a license for the Trolls images myself, these designs were just for personal use at our party. I’m trying to figure out if I can still offer them to you as free printables since that’s giving them away instead of “selling” them. 🤔 Stay tuned…

One way you can DEFINITELY get some cute characters into your party though is through wall decals and other official licensed character merchandise. Instead of buying Trolls themed plates, etc I bought a set of (removable) Trolls Wall Decals on Amazon and used them to put characters on the chairs and elsewhere around the party… 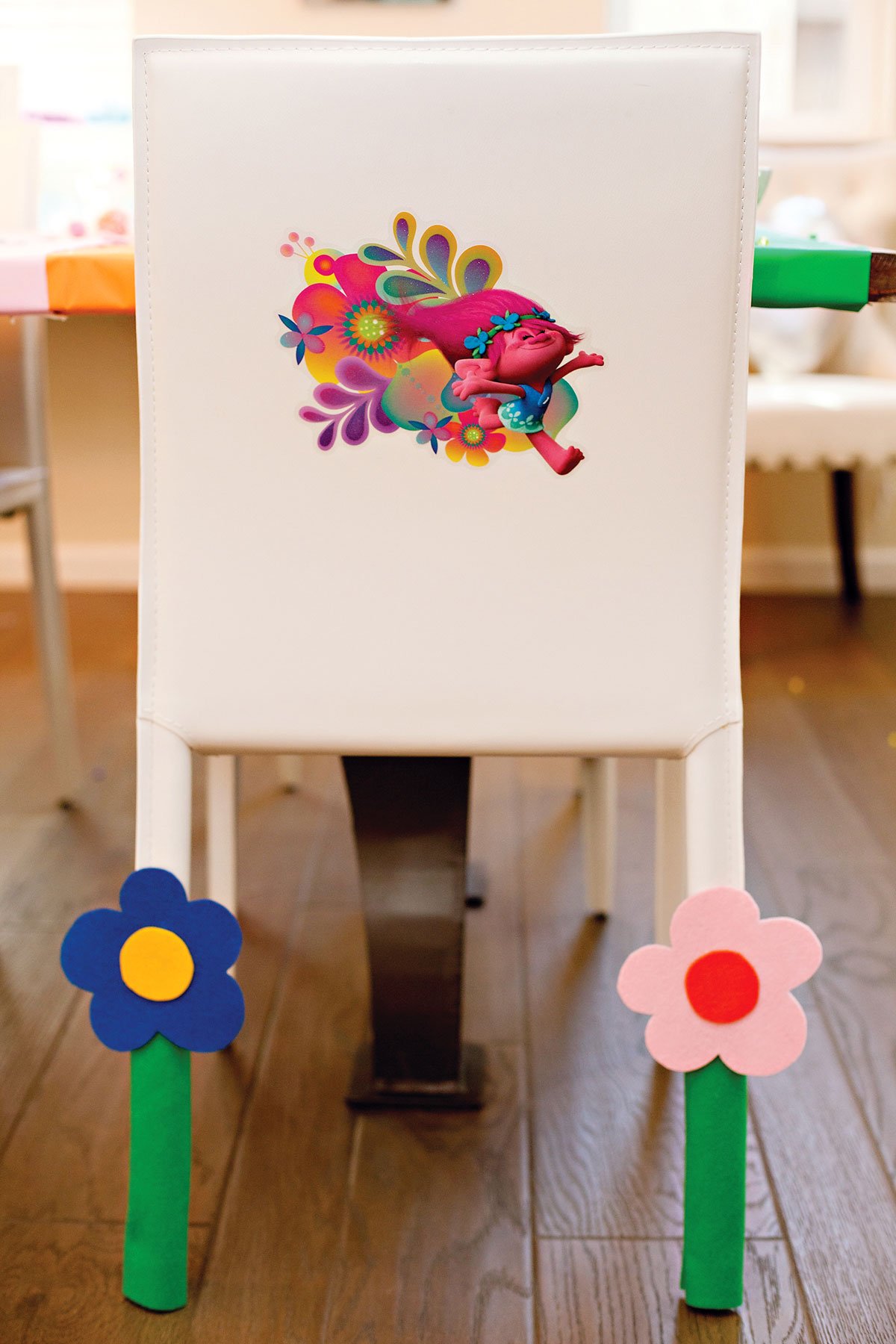 The character decals were such a quick and easy way to theme up the party! I also added felt flowers to the chair legs for a playful & unexpected detail.

The main craft activity was a rainbow bead station. I basically set out tons of beads and little ice cream cup holders and let the girls go to town making super colorful necklaces… 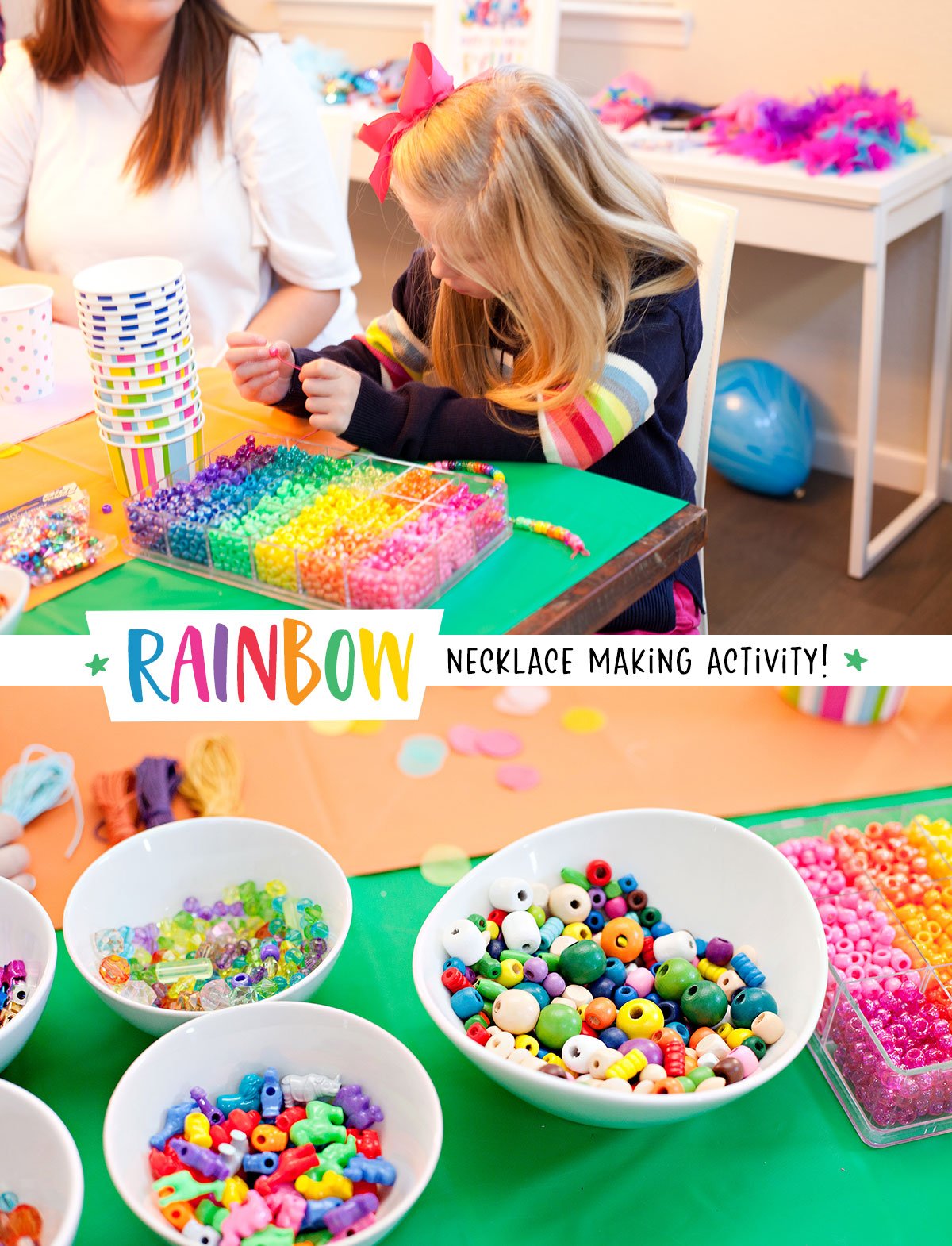 I love how their necklaces turned out… they look like happy little parties in themselves! 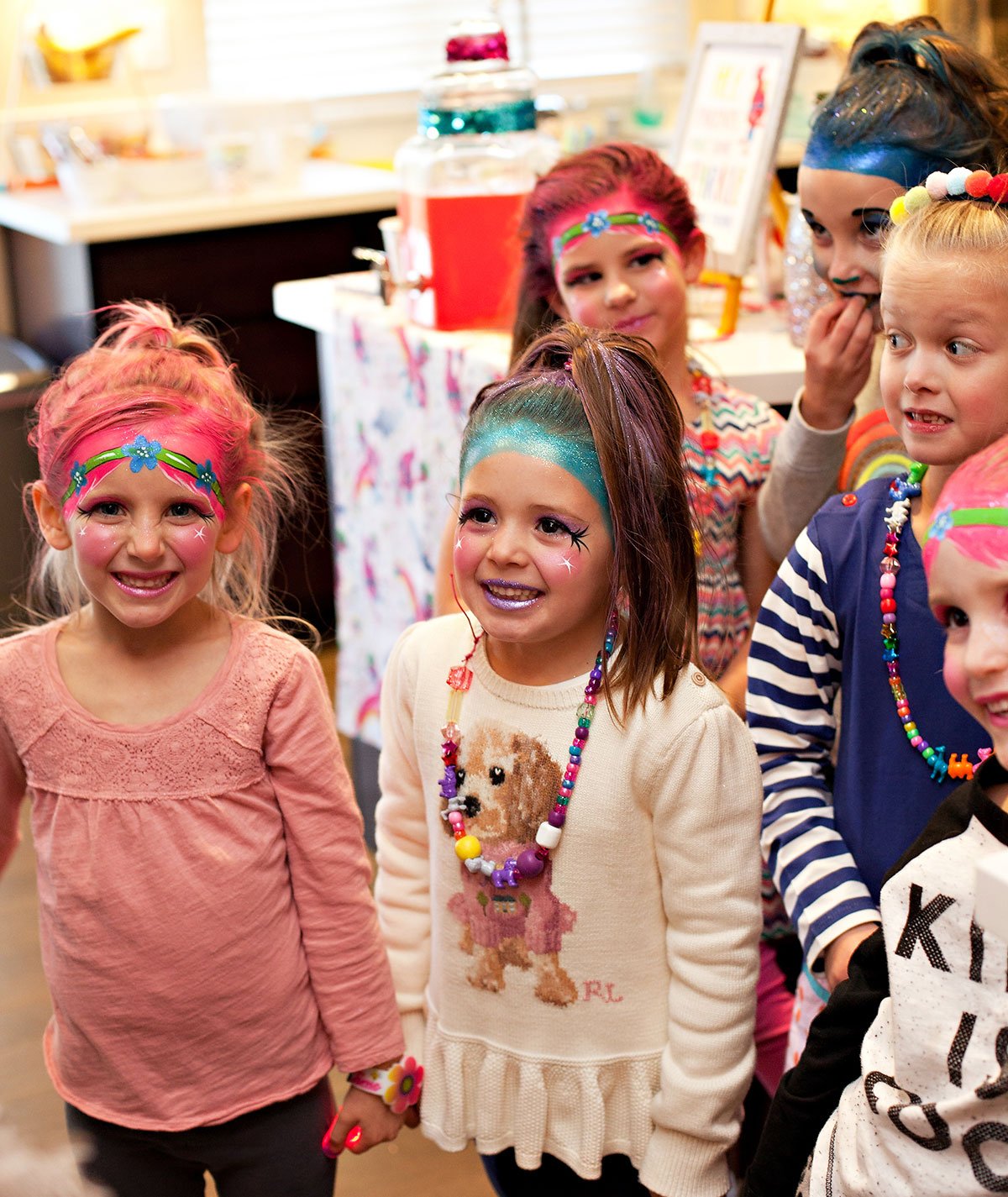 I remember having such grand plans for creative Poppy-inspired centerpieces, and then realizing the clock had other plans. (As in, it was definitely not giving me enough time to actually do my grand plans.) Well… all was okay in the end, because I’m actually pretty happy with the totally random centerpieces we ended up with. 😆 And they only took a few minutes to put together! 🙌 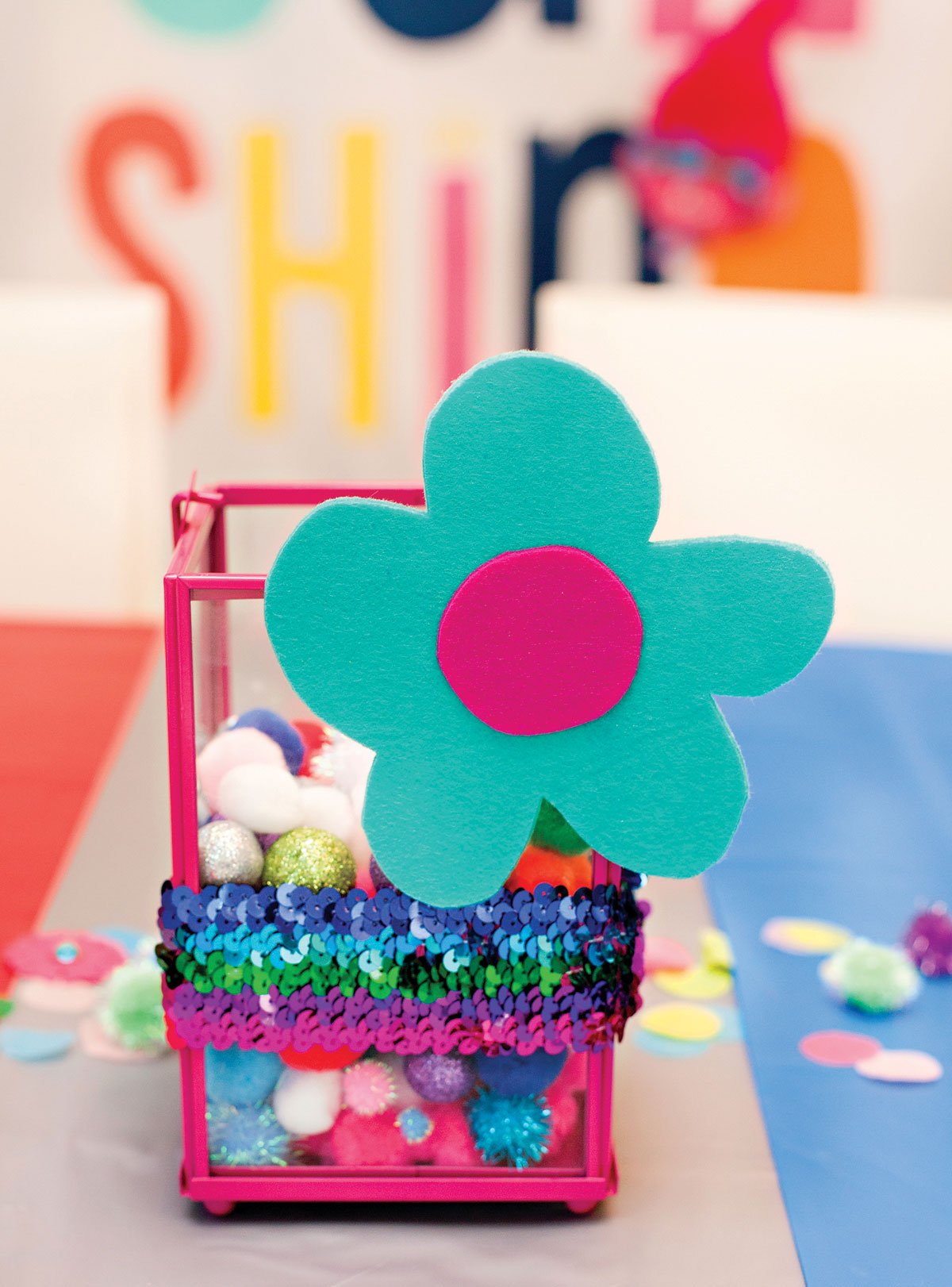 For the first centerpiece, I filled a small table lantern (picked up in the dollar bins at Target) with a variety of colorful craft poms. Then I hot glued some sequin trim around the middle and added a felt flower to the top. Done!

For the second centerpiece, I tied balloons together to make a giant flower (see my tutorial on this here) and attached the flower to a dowel rod “stem”. I glittered a wooden vase for the base and filled it with floral foam to hold the giant flower in place. The foam was covered with more of the craft poms. 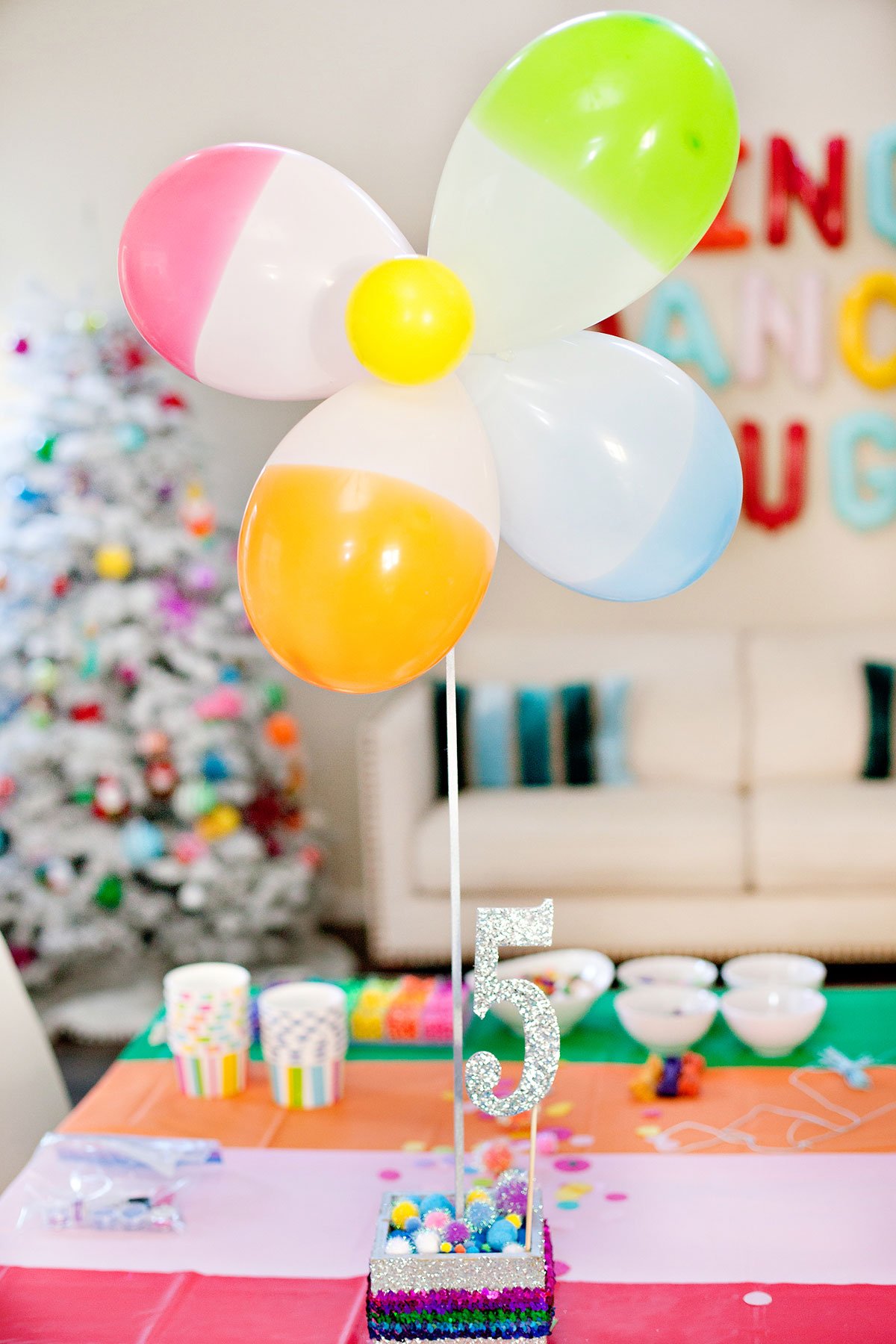 Note: I used these Two-Tone Balloons for the giant balloon flowers. You can use any sort of balloon you want though. :)

Rylie (our birthday girl) has always loved makeup and dress-up, so our big splurge & the main activity for this party was hiring a face painter. Stacy from Color Me Cutie was AMAZING. (And I remember her saying she’d never done Trolls characters before this party. 🙌) 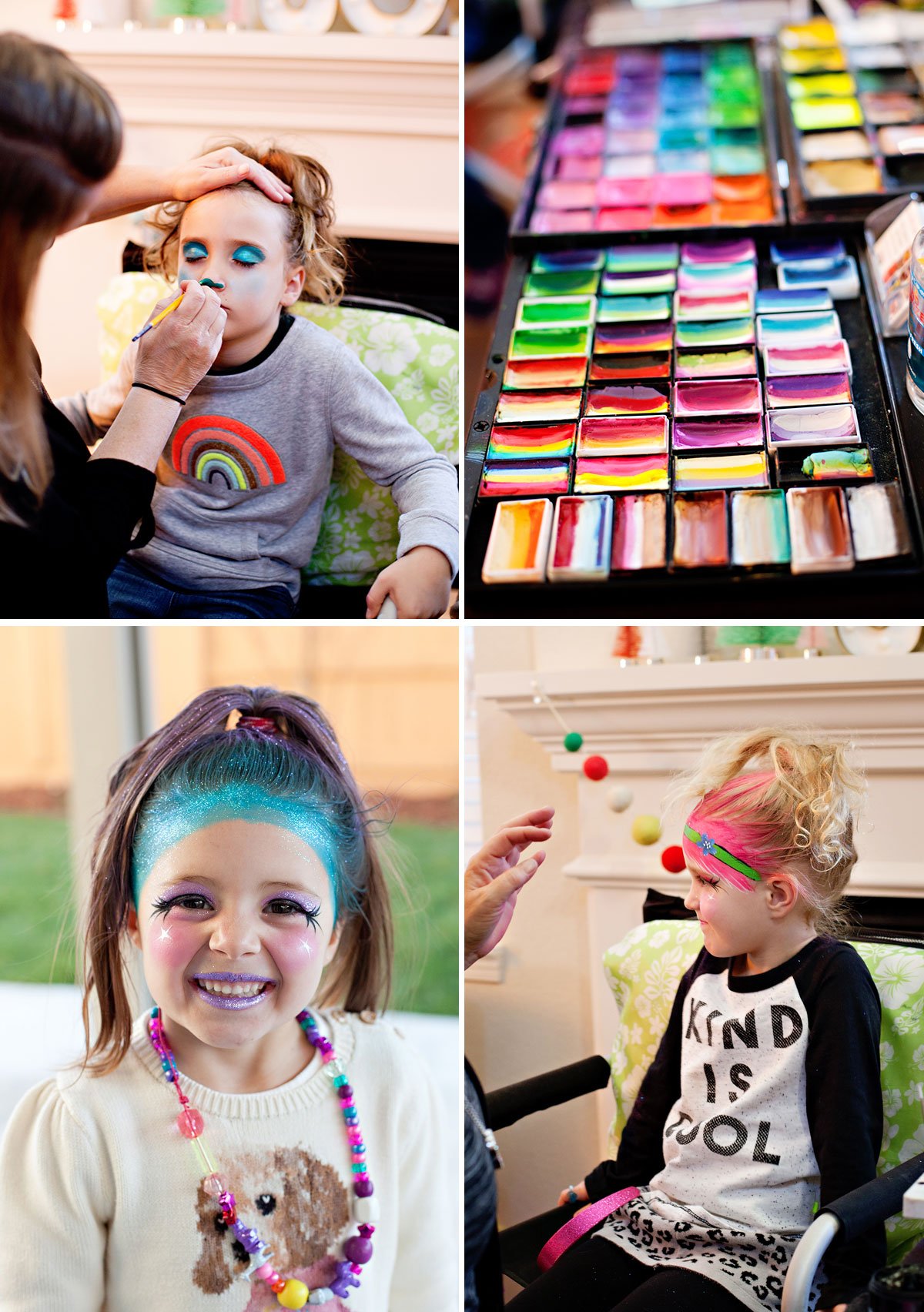 We also had a small dress up station with light-up rings, feather boas, and sequin headbands for the girls to play with and take home. Designer Betsey Johnson had a really fun Trolls line out at the time. I bought a few of those pieces, including this fun ring holder! 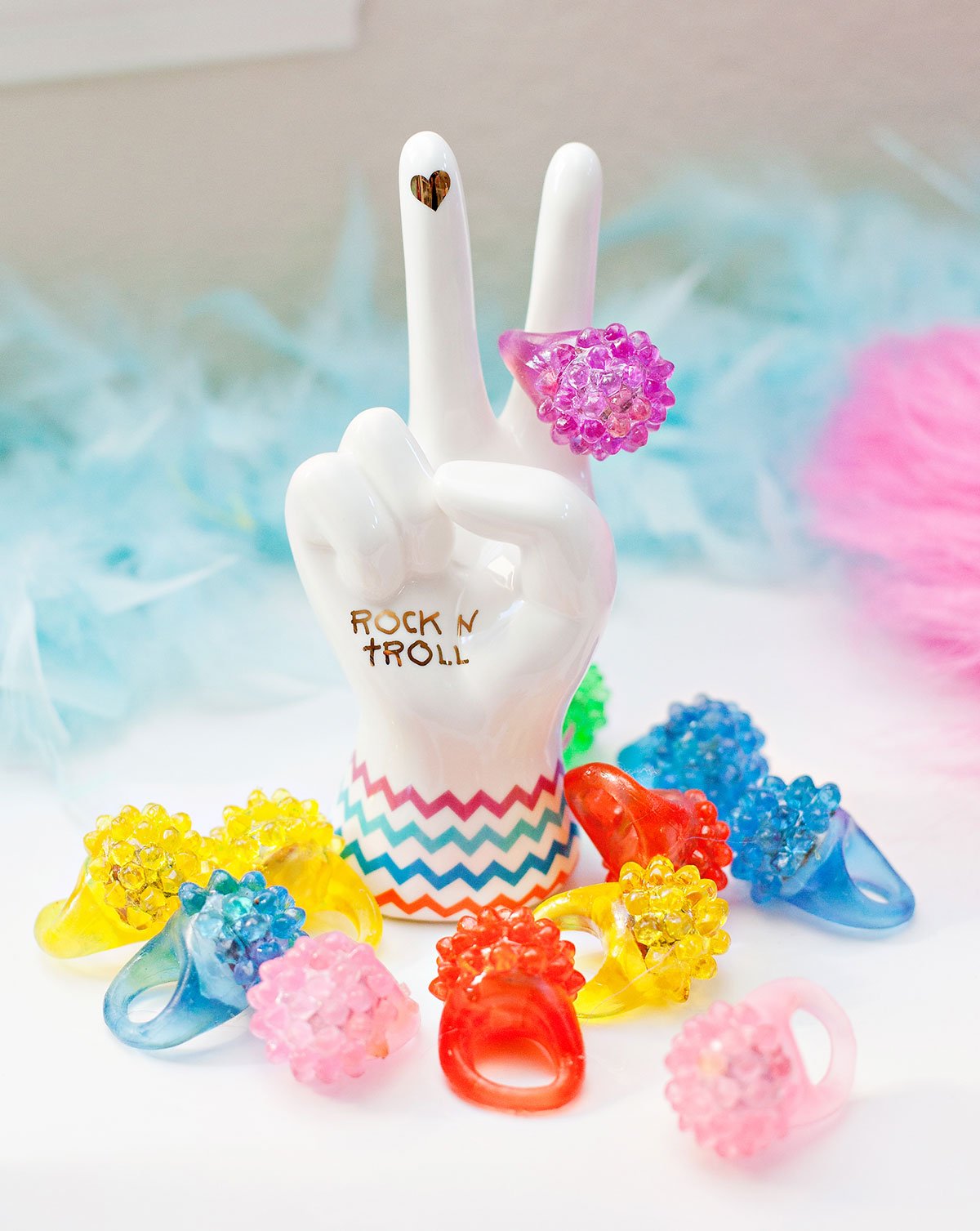 The other official party activity was a pinata. I found a colorful one at Target that wasn’t necessarily “Trolls” themed but it still totally went with the rainbow + crafty vibe. 😊 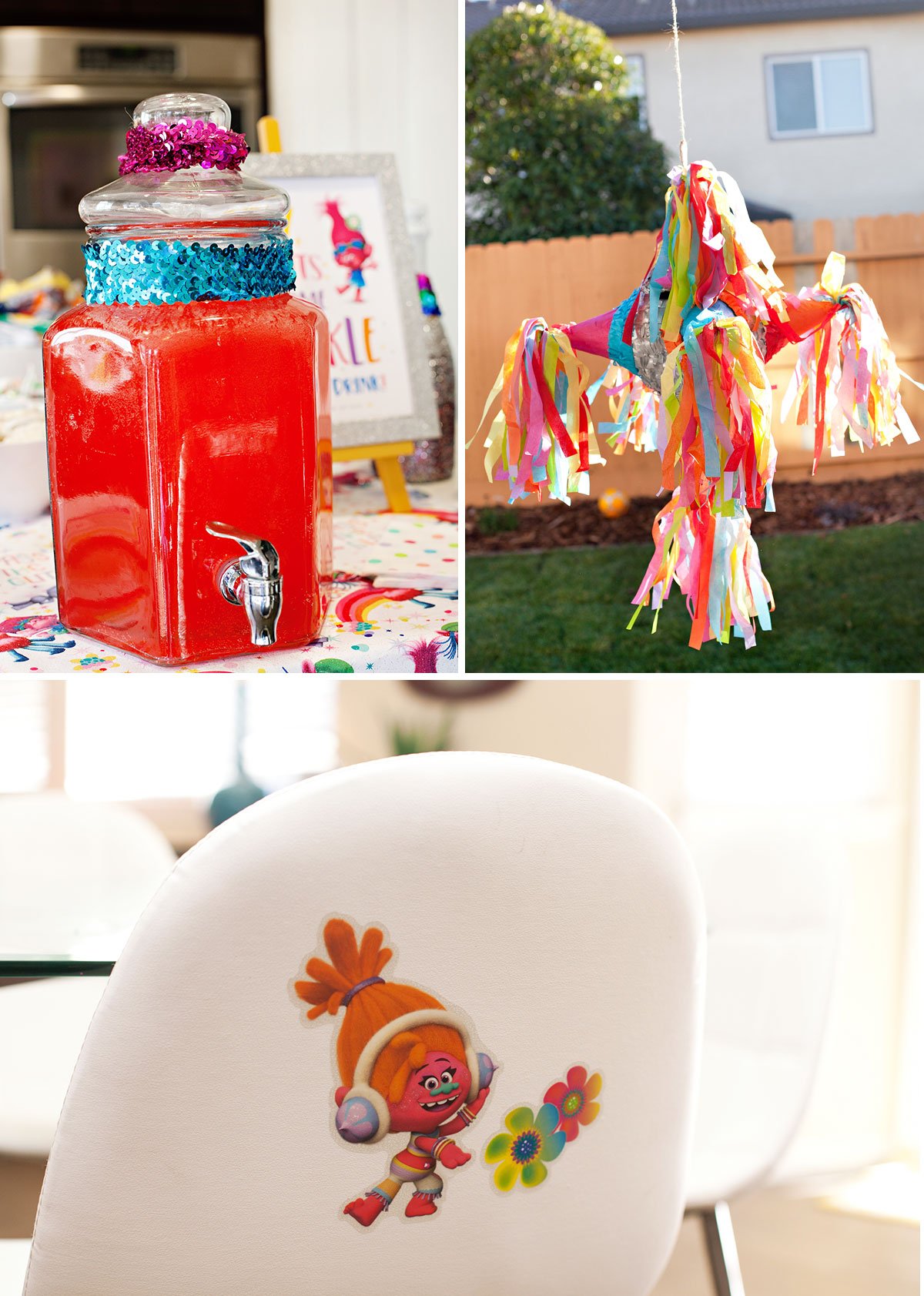 When you’ve got young kids, your social life is often overtaken by kids birthday parties and activities. So whenever other adults are actually around for me to have grown-up conversations with 🙌, I like to have something special just for them.

In this case… CHAMPAGNE! Served in glittered champagne bottles of course. 😉 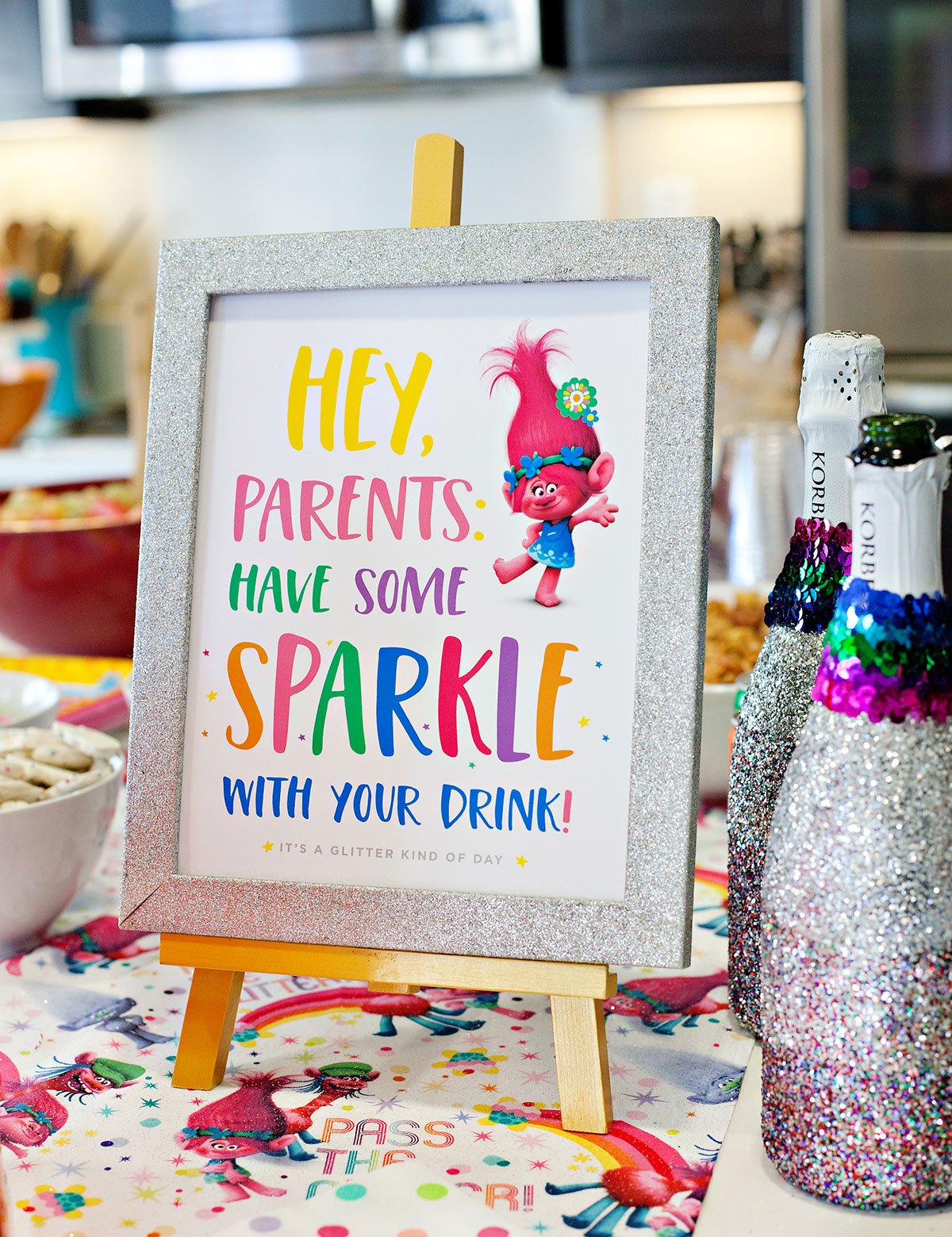 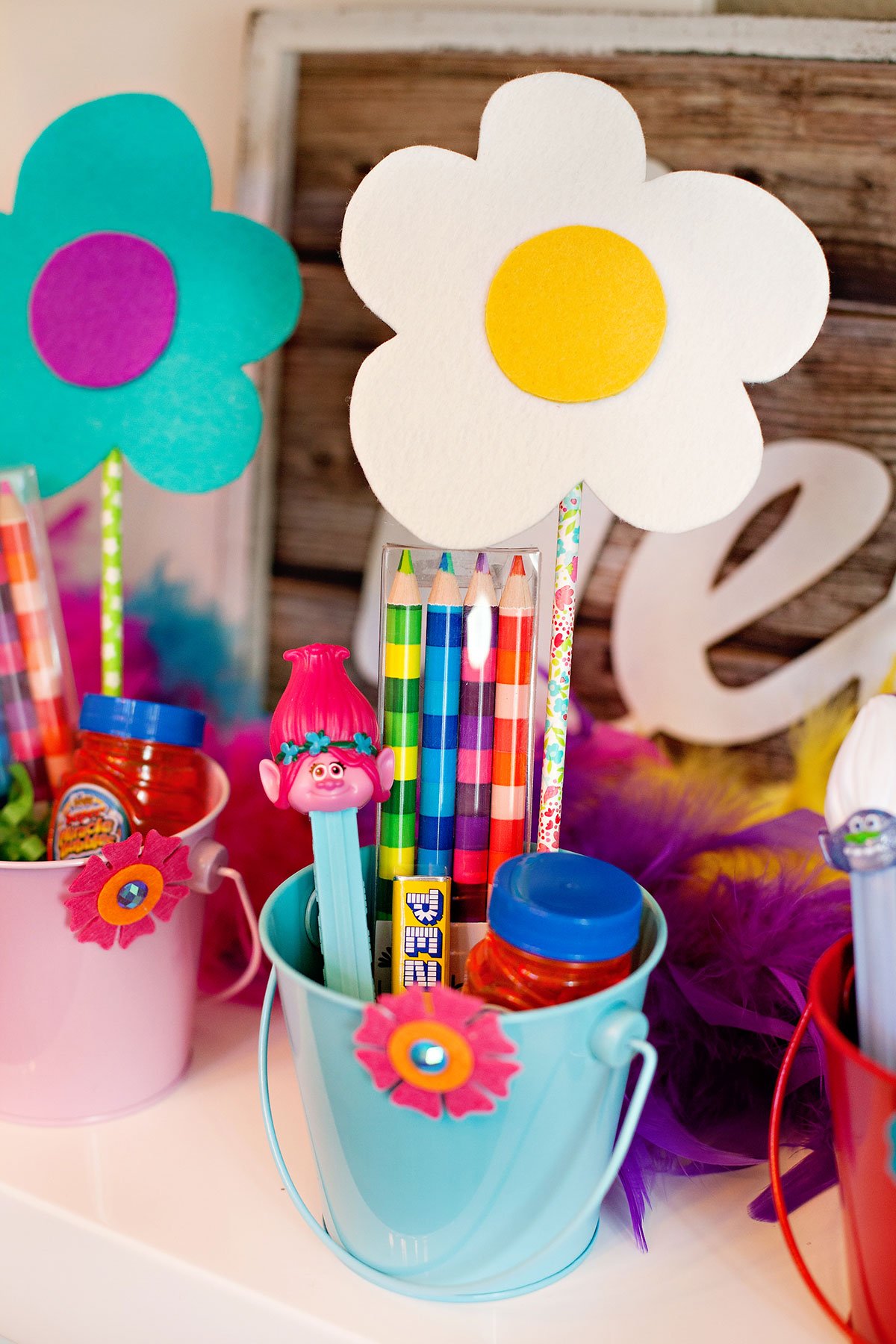 Last but not least were the party favors!

I’m a big fan of giving away favors that are useful beyond a few minutes of playtime. This means I’ll either spend a little more money on “good stuff” or just skip the party favor all together. (Especially if guests are doing an activity they can take home – like the necklaces.)

Since this was a smaller party, though, I spent a little more on the favors and put together colorful favor pails. The main gift was a cool Jumbo Color Stripe Pencil Pack from Target. Trolls Pez Dispensers helped to play up the theme. And then bubbles and rainbow candy rounded out the gift. I also added another big felt flower (attached to a party straw this time) to make them look extra cute. 🥰

And that’s a wrap for our rainbow glittery whirlwind of a birthday party! Hope you’re able to use some of these ideas for your own Trolls party, too. 💛🌈

If you have any questions, please feel free to ask away in the comments!