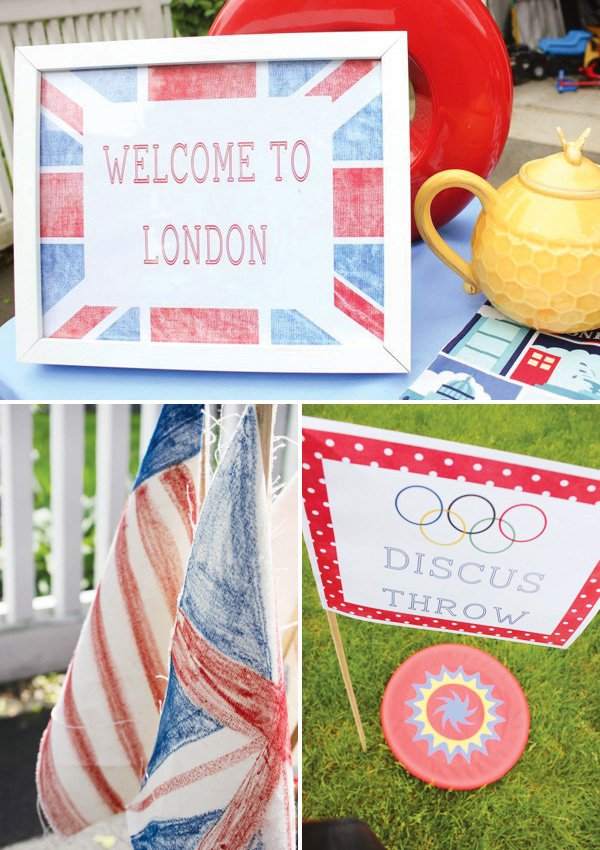 Grab a (felt) torch and let the games – and the party – begin! Margit of Dot & Dash thought up incredibly creative activities, table decorations & more for her daughter’s Olympic Themed Birthday Party. And I’m pretty sure Margit deserves a gold medal herself for creativity here… read on to check out lots of clever & budget-friendly details – like the DIY “Olympic rings” table centerpiece fashioned from colored paper plates! 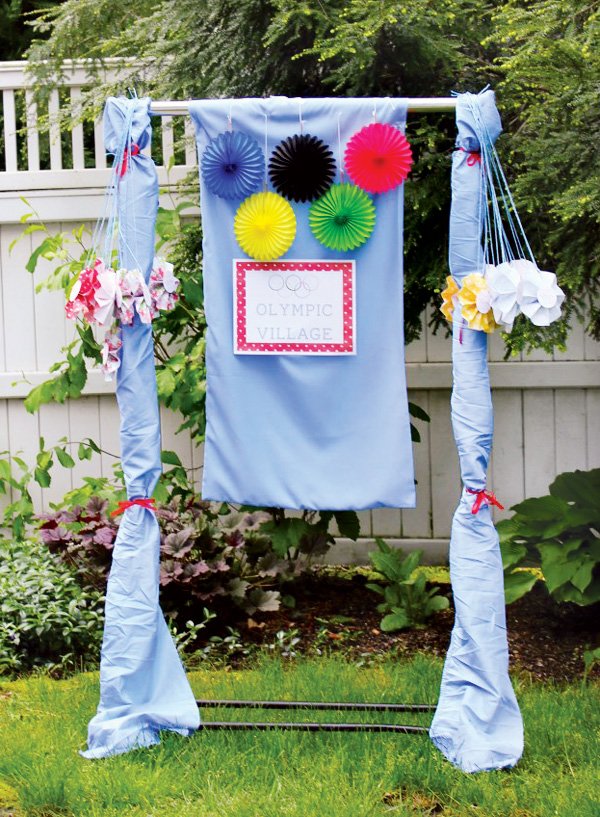 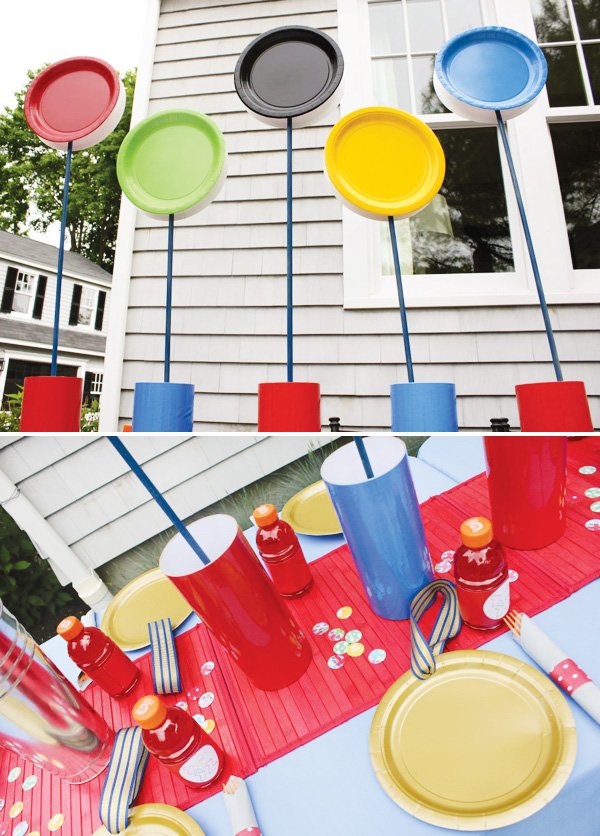 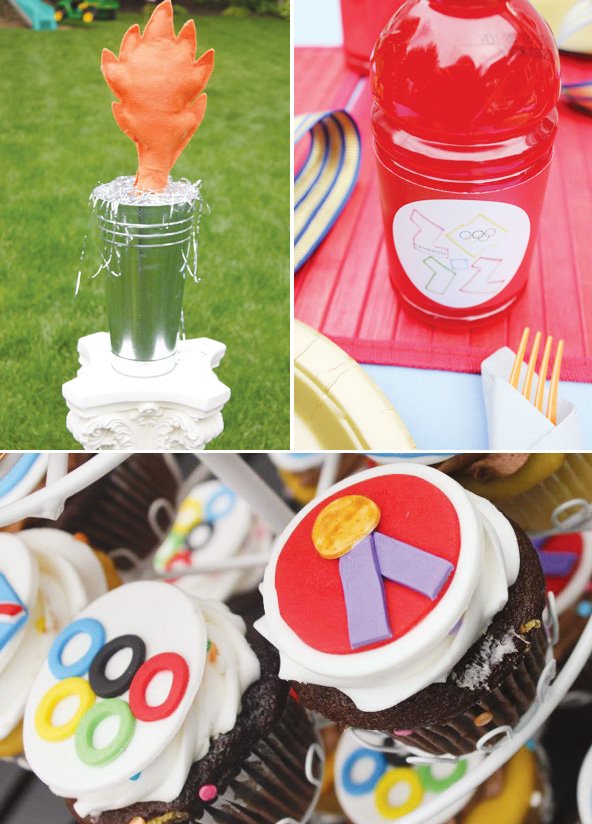 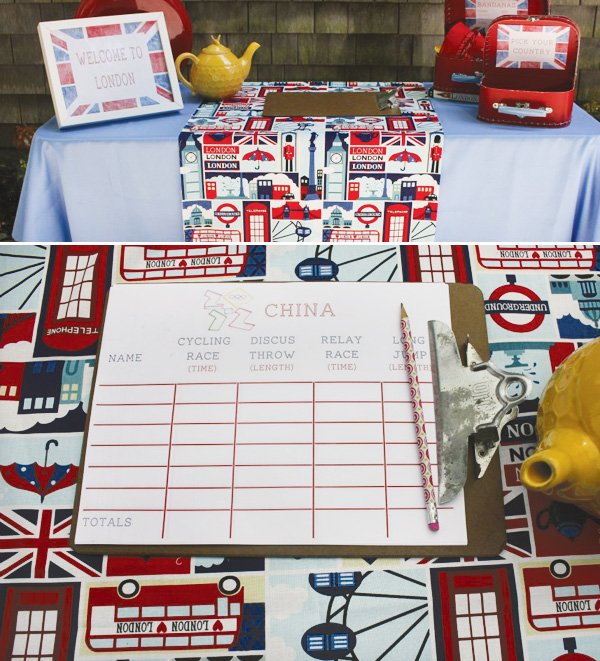 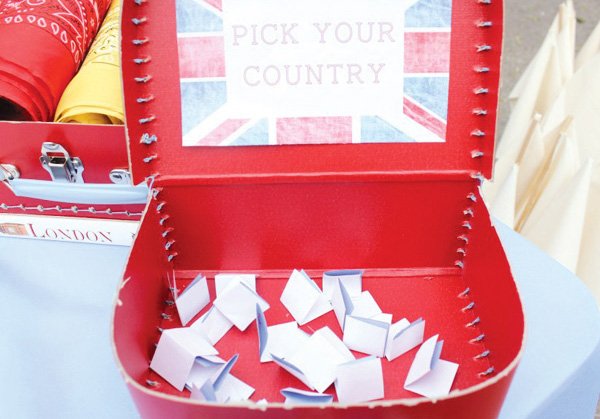 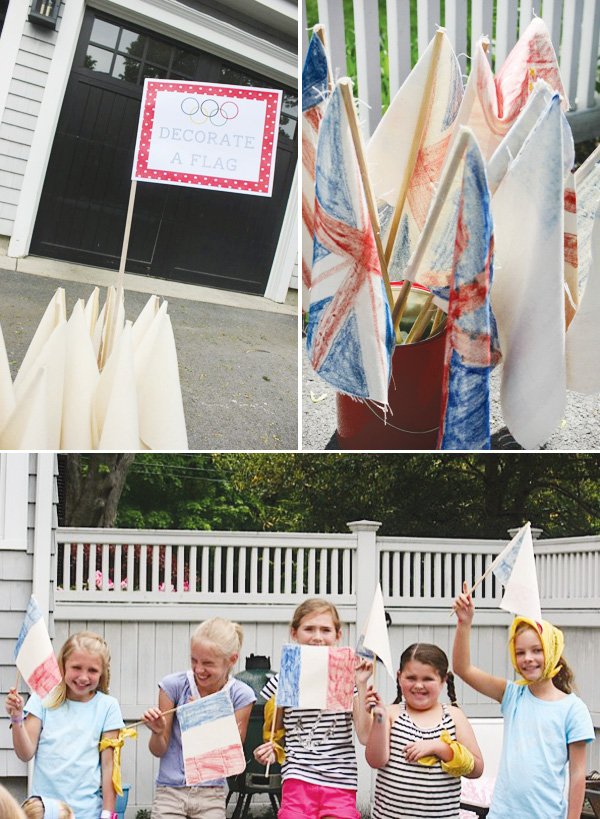 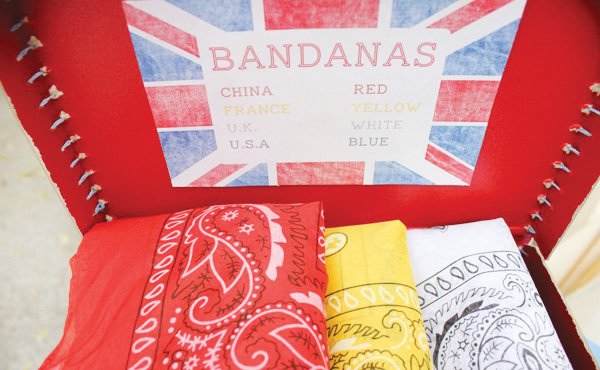 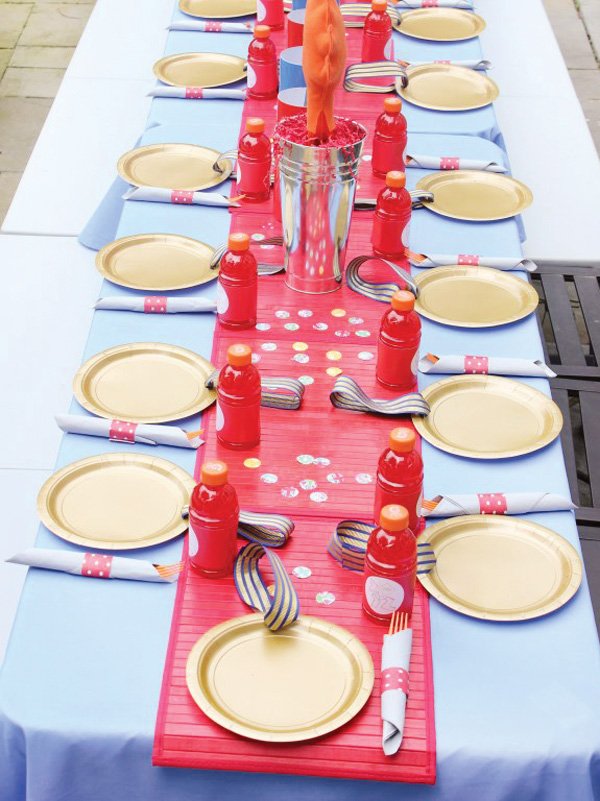 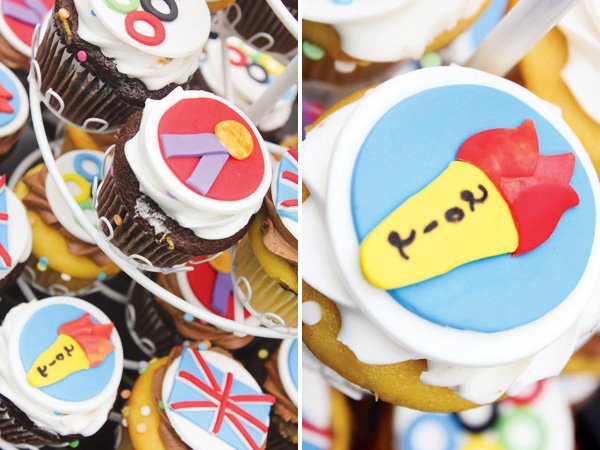 PARTY DETAILS, as told by Margit…
:

This Olympic party was created for Cameron an adorable, sporty, 9 year old girl. I think an Olympic theme will always lead to a very fun party, however I especially loved pulling this event together while knowing that the official games will be starting soon.

The starting point for this party was to relate back to the 2012 games and to that end we added a London bent to the theme. I started by creating a logo for Cameron that resembled the “London 2012” logo and this was used throughout the party.

When the girls first arrived they went to the “check in table”. This was set up with fabric with images of London, a “welcome to London sign” a teapot and two suitcases all in coordinating colors of red, white and blue.

Before the party we had written the names of 4 countries (China, U.S.A, U.K. and France) on pieces of paper. These were placed in one of the suitcases. Upon arrival each girl picked one and that became the team they were on.

Once the team had been assigned they were given a bandana in a coordinating color to wear as well as a blank flag (these were made by cutting a wood dowel in half and attaching a thin piece of cotton duck) and were able to go over to the “Olympic Village”. Here they divided up into teams and colored their flags to match the country they had been assigned to (examples of each countries flag were put out for reference).

Once the flags were colored the opening ceremonies began. They marched through the backyard with their flags to the U.K. Anthum. Cameron carried a torch created by attaching a felt flame to a flashlight. Then it was time to let the games begin.

There were four events: Discus Throw, Cycling Race, Long Jump and Relay race.For the discus race we set up a torch on a greek column (this was the same torch that was used for the opening ceremonies and served as the “lit” torch through out the party) and the girls were asked to throw the discus as close to the column as possible. The distance from the column was then measured and recored. Individual distance was also recorded for the long jump while total team times were recored for the relay race and the cycling race. After each country had competed in each event it was time to eat.

The table was set with gold plates made to look like medals by stringing a ribbon through the top. The silverware was orange wrapped in a silver napkin which resembling the torch. Gatorade bottles were wrapped in labels featuring Cameron’s Olympic sign. The centerpiece was an oversized Olympic insignia which I created by attaching colored paper plats to dowels. It had an impressive effect for being relatively simple.

The girls dined on pizza and cupcakes topped with the most amazing fondant toppers by Maria of Love & Sugar Kisses. She was kind enough to take this on as a special order and make 4 different toppers: torch, olympic insignia, Union Jack and Gold medal. I adore how they turned out.

While lunch was taking place the girls individual scores were averaged to get a team score for each event. Once the total scores were figured out a medal ceremony took place. Medals were created out of digital papers I purchased from etsy. The center of each medal featured the special “Cameron 2012” logo that I had created. I love that after going through all the events we could actually present each girl with a medal like this – it made the party feel just that much more “real”.

At the end of the party each girl left with the bandana, the flag she had colored, the medal, a star ballon that said U.S.A 2012 and a marshmallow pop with a tag which said: “Olympic sized thanks for coming to my party, Love Cameron”. All the girls had such fun at this party.

I loved this party not only because it is so relevant considering the upcoming games, but also because it was active, engaging and could truly be fun for all ages and genders. It is a simple theme that has certainly been around for a long time and with very good reason.