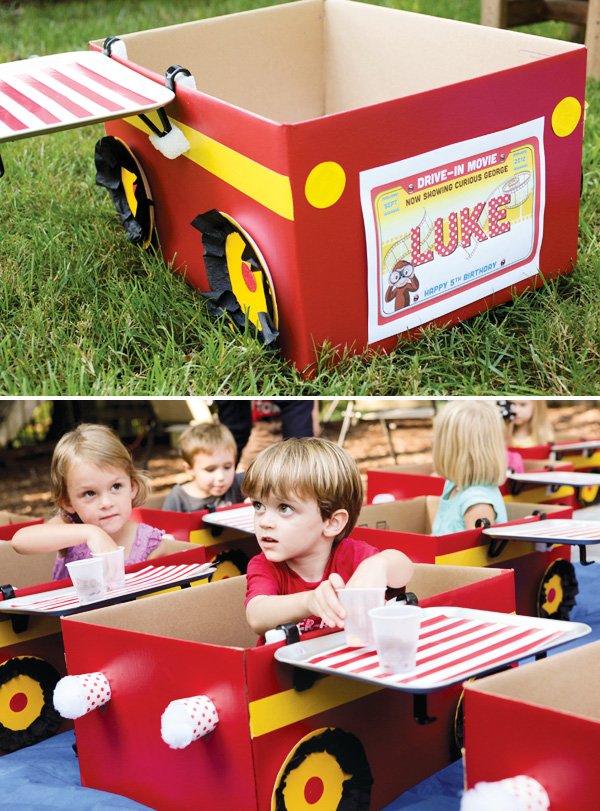 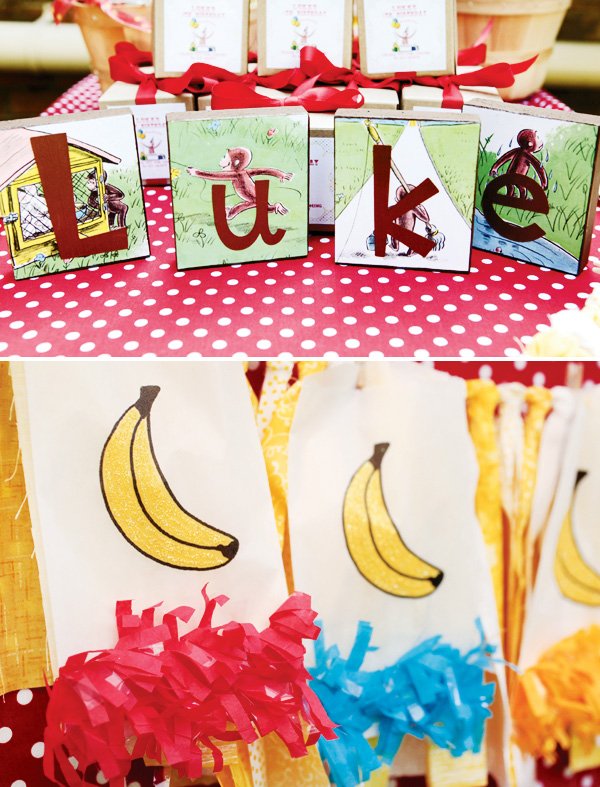 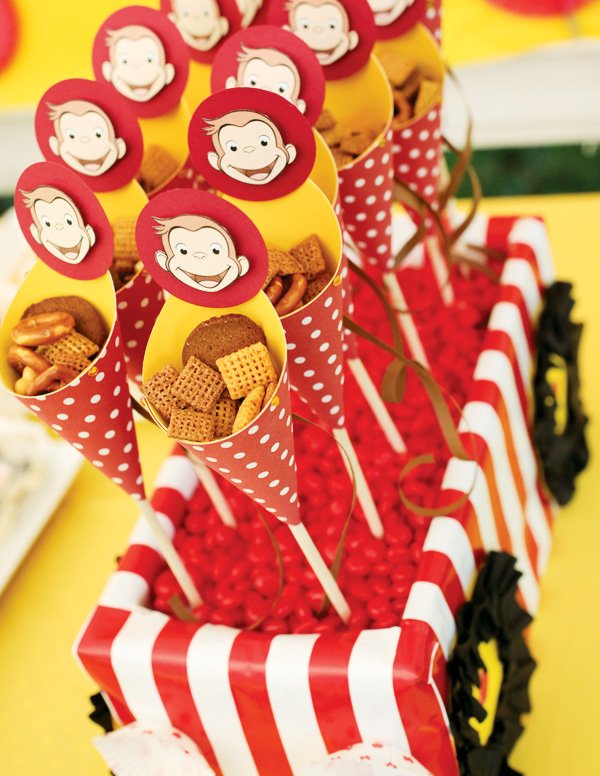 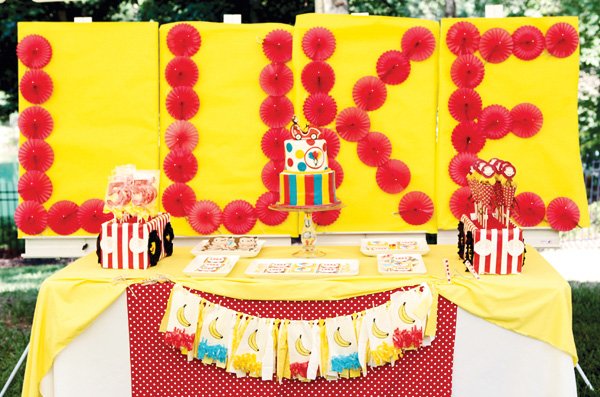 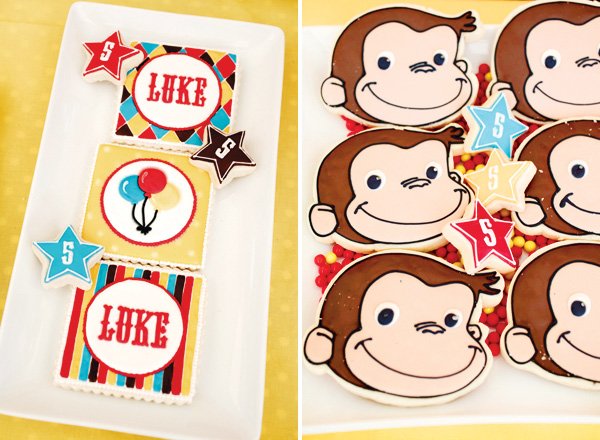 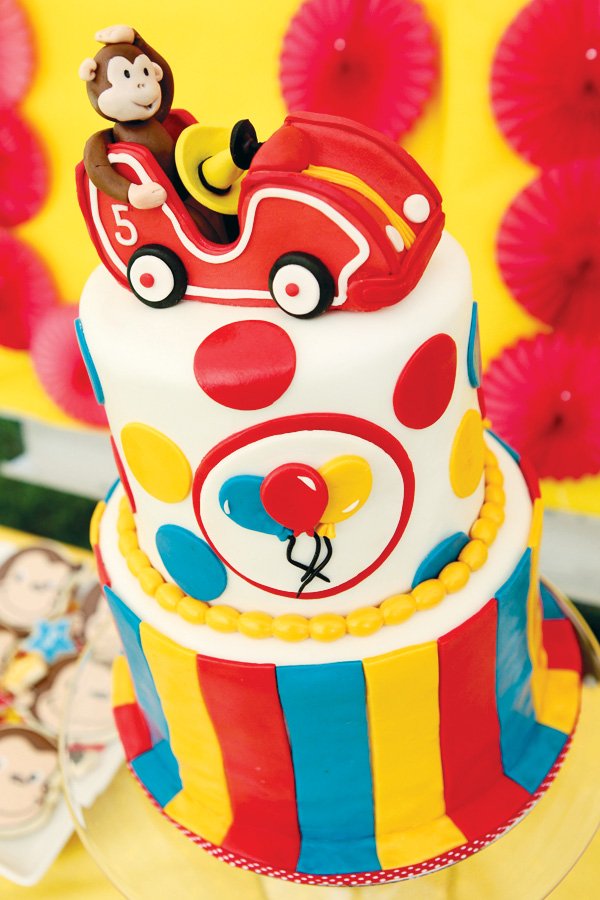 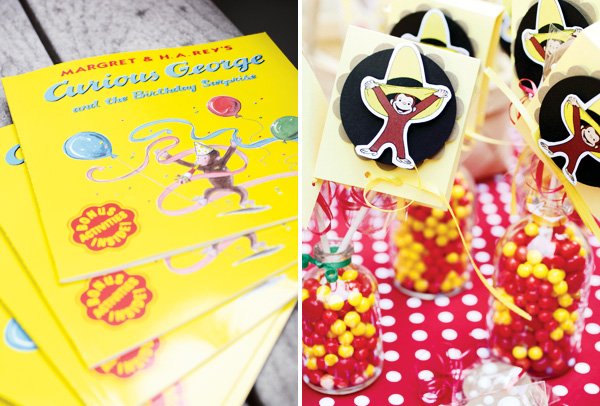 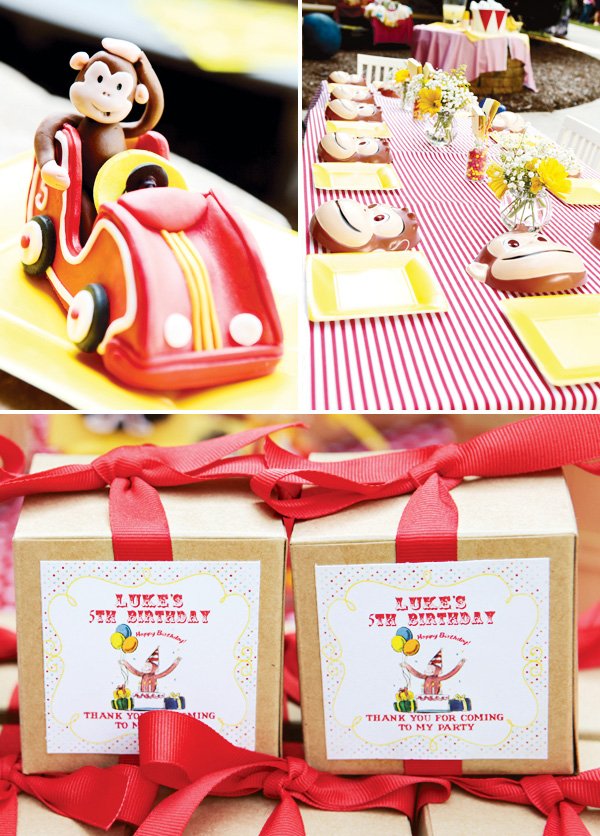 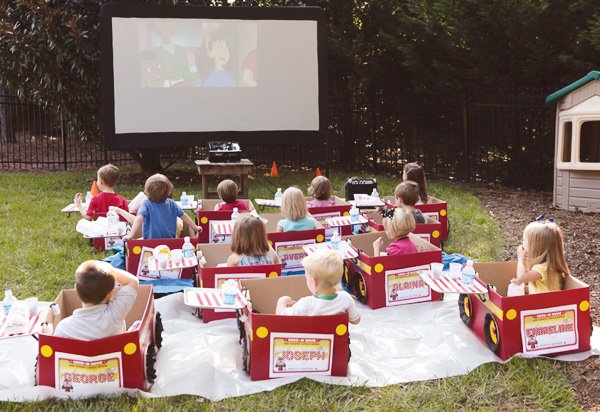 PARTY DETAILS, as told by Lydia…

This party was planned for a Birthday Boy who was turning 5!  His mom wanted to have an outdoor movie, and Luke asked for a Curious George theme.  We combined the wishes to create Curious George at the Drive-In Movie!

I made 12 little cars for the guests to sit in during the movie.  The boxes were painted red and had wheels made of yellow paper plates with black crepe paper “tread”.  I added a yellow “Duck Tape” racing stripe on each side, headlights made of paper candy cups with a white tulle pom inside, yellow taillights, and DARLING customized license plates for each guest.

I thought it would be complete with official car hop trays and so those were added to each car for the children to enjoy their snack in style and with ease!  Each car hop tray had a piece of red and white striped paper for extra color.  These were fun and a really big hit!  What child doesn’t love to play in a box (and they were great party favors!)?   The party took place during Hurricane Issac and so we had to put down tarps on the wet grass- amazingly, we had just enough time to have the party before torrential rain poured!


Luke’s mom requested an amazing cake and so we decided on 2 tiers of dots and stripes with Curious George in a car on top!  The inside of the cake was a yellow cake with chocolate chips.

BEAUTIFUL custom cookies were a huge hit with the party guests!  Using the party colors of red, yellow, brown, and blue, the cookies incorporated Luke’s name, his new birthday number, Curious George, bananas, and stars.  I loved the harlequin pattern and the stripes!  The Curious George face cookies were the kids’ favorite!

To temper the sweetness, we had Chex Mix served in the CUTEST cones especially made for Luke’s party!  The cones were on a stick and had George’s face and a long, curly monkey tail.  I displayed them in a “car” so that it looked like a car-full of monkeys ready for the movie!

In another “car”, I displayed red suckers with the number 5.  To keep the yellow jackets away, I kept them loosely covered in their wrappers.


Birthday Boy Luke also loves Super Why (that theme was a close second to George), and so I incorporated his love of spelling (Luke loves to spell everything!) by spelling out L-U-K-E behind the dessert table.  Using cork board on easels, yellow paper and red fans, it was easy to add Luke’s name to the party fun.  There was no doubt whose special day this was!  On the front of the dessert table, I hung a ripped fabric garland in yellow and white and then added ADORABLE, hand-glittered, hand-drawn banana bags with festive fringe.  The bags were the perfect way to tie together all of the party colors and to add a little shine!  I also LOVED the “Now Showing” poster made especially for Luke’s party!


The activities were kept very simple…the children had a ball playing on the playscape, eating cake, pulling the strings on a pinata, and watching a Curious George movie in their shiny red cars!


A favor table was set up and was loaded with treats for the children.  Each guest had the adorable banana bags with fringe to put their favors in to take home.  Chocolate Lollipops with polka-dots were covered with Curious George lollipop wrappers.  We spelled out Luke’s name again with wooden blocks that can be used in his room for decoration- and as a nice reminder of such a fun and special day!  Banana crayons and bottle cap necklaces fit perfectly in the little favor bags.  Each guest also had a box of cupcake mix with a customized label so that they could keep the party going at home while they also read their new Curious George book given to them by Luke.


Luke decided on asking his friends to donate dog biscuits instead of bringing gifts.  When he made his donation to the local animal shelter, he had the special treat of being able to give each pup in the shelter a dog biscuit.  Luke also made the front page of the local newspaper for his sweet and thoughtful gesture.  Luke and his friends donated 26 bags of treats to the shelter- Hundley would be proud!!

It was a great day for monkeying around with Luke and his friends and family!