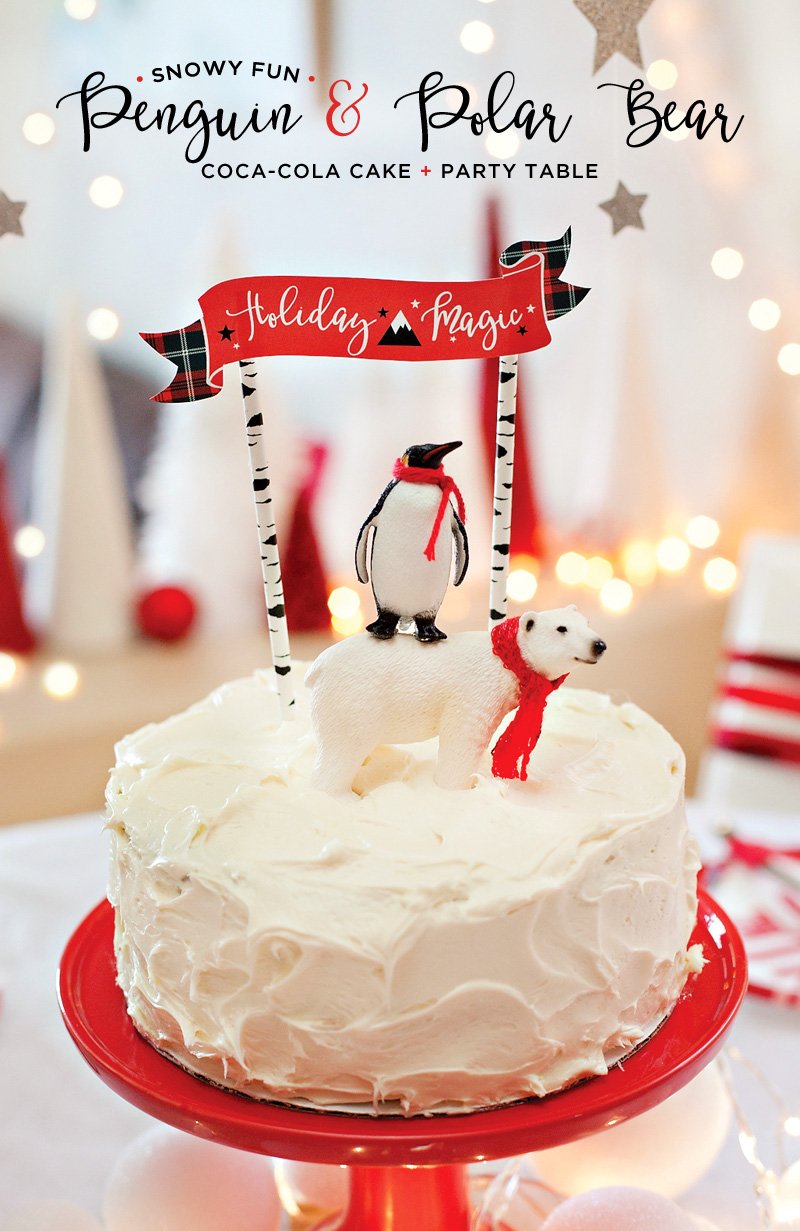 Inspired by the adorable penguin & polar bear Coca-Cola commercials from a while back, I thought it would be fun to make a playful “snowy” cake topped with a penguin and polar bear. And of course they’d be getting along *swimmingly*, because we ARE talking holiday magic, after all! 😉


One of the best things about this cake, though, is how EASY it is to make. I used a Coca-Cola cake recipe that only requires 5 ingredients, then covered it in “snowy peaks” of store-bought vanilla frosting. This is one of my favorite ways to frost a buttercream cake, and you don’t have to be a dessert decorating pro – AT ALL – to make it look good! 🙌

Read on for full details on:

P.S. This is the first time I’ve used the Coca-Cola mini cans… Why is everything so cute when it’s mini sized? 😍 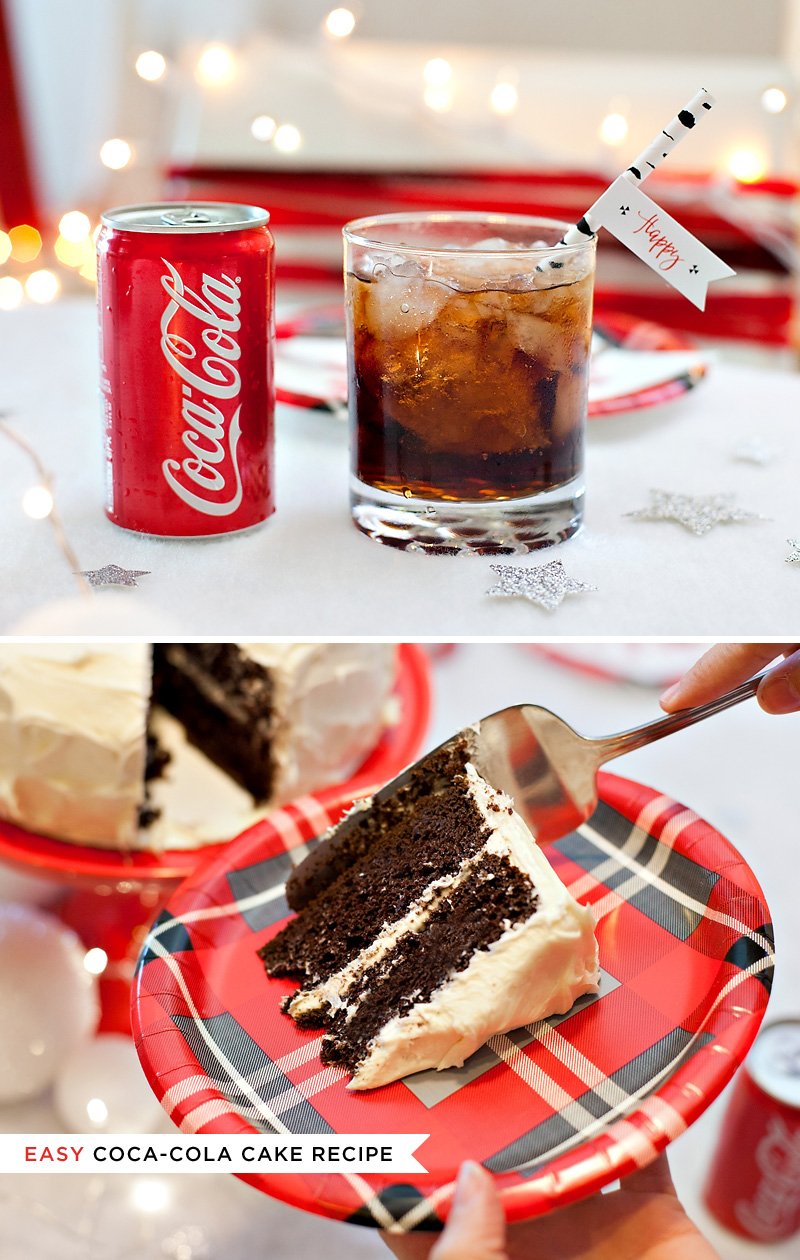 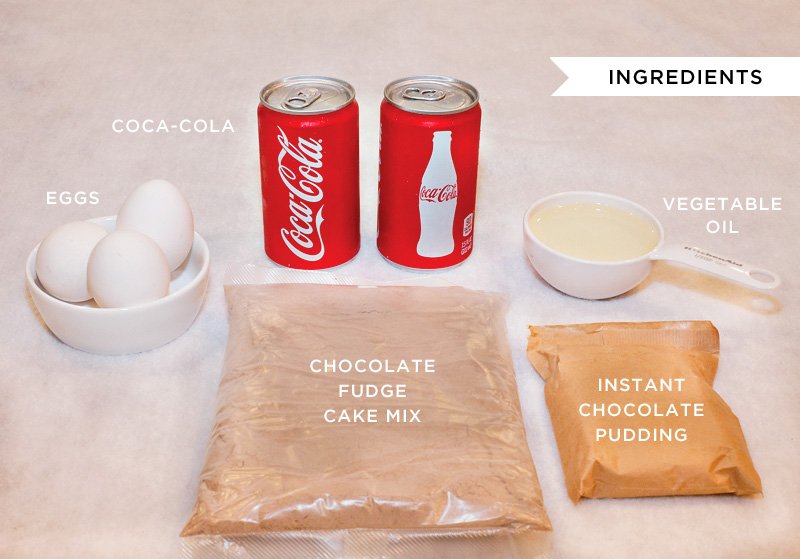 2. Beat ingredients on medium speed for about 2 mins. 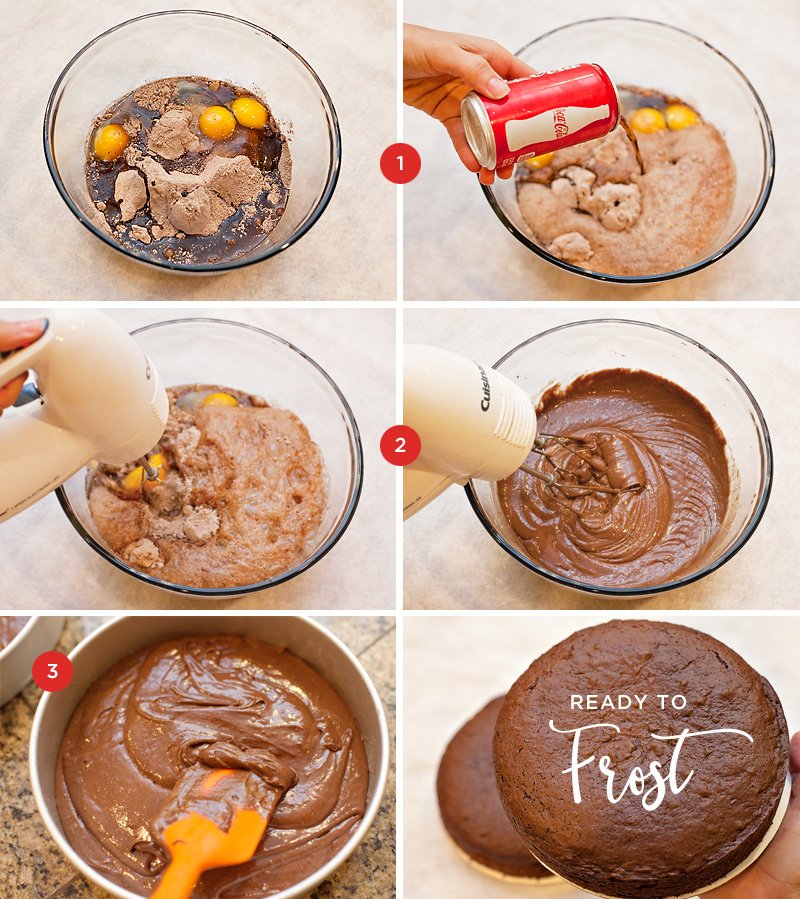 Once your cakes are done, remove from the oven and let cool completely. Now we’re ready to FROST!

Step 1: The Crumb Coat
If you’ve never tried a crumb coat before, these 2 little words will change your life the next time you frost a cake at home! 🙌 The crumb coat is simply a thin “base layer” of frosting that you put down first to catch up all those messy crumbs that like to get mixed into your frosting. (I used almost 1 full container of frosting for this step.) 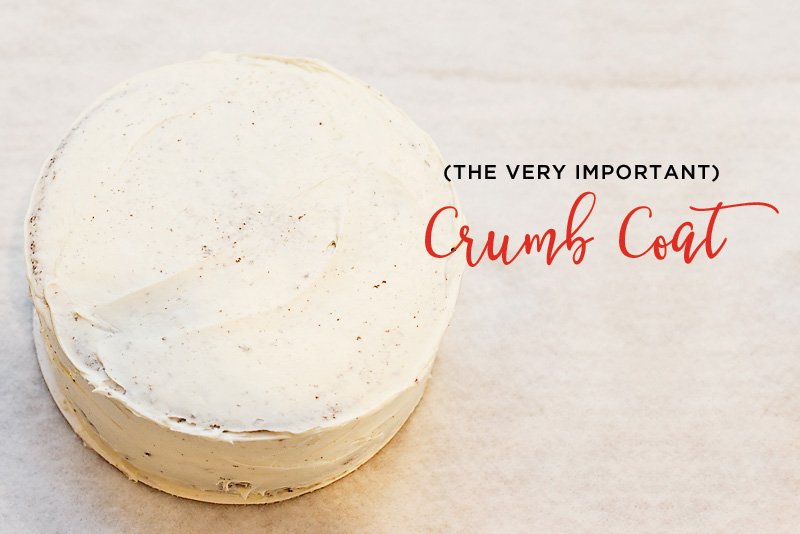 Chill the cake for 30+ minutes after the crumb coat is finished. The frosting should harden and form a nice, smooth base for your main frosting layer… that’s completely free of messy crumbs! 🎉

Step 2: The Top Layer
Using an angled spatula, heap generous amounts of frosting onto the cake. Start on the top, then work your way around the sides. Spread the frosting into a thick layer. (I used the rest of my 1st container of frosting + the entire 2nd container for this step.) 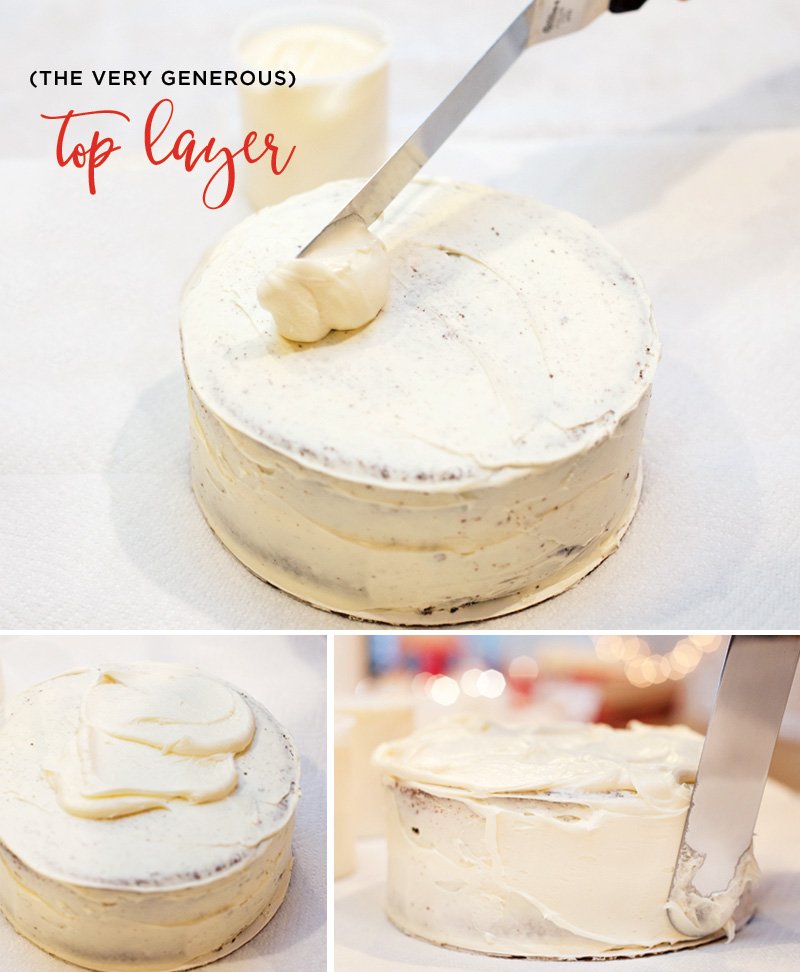 Now you’re ready to form the “snowy peaks”. Gently press the bottom of the spatula into the frosting, then turn your wrist and lift upwards. Continue adding peaks until you’re happy with the look of the cake.

Once you’re done, it should look something like this: 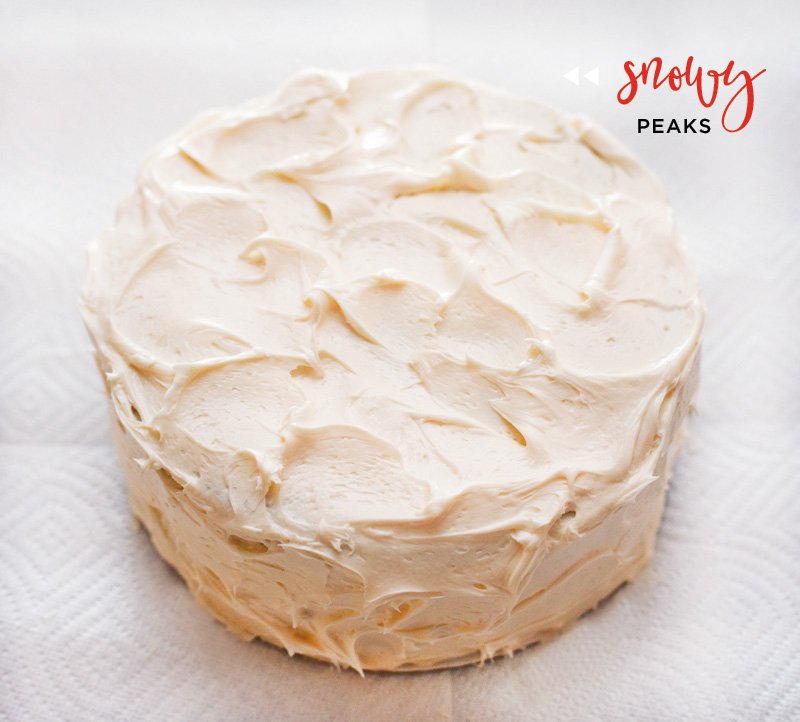 Fun, right?! This snow looks like it’s ready to be played in…. which brings me to the cake topper!

I purchased small penguin and polar bear toy figurines on Amazon, then used yarn to give them little scarves. Hot glue the penguin’s feet to the back of the polar bear so that it looks like he’s taking a ride on the bear’s back. 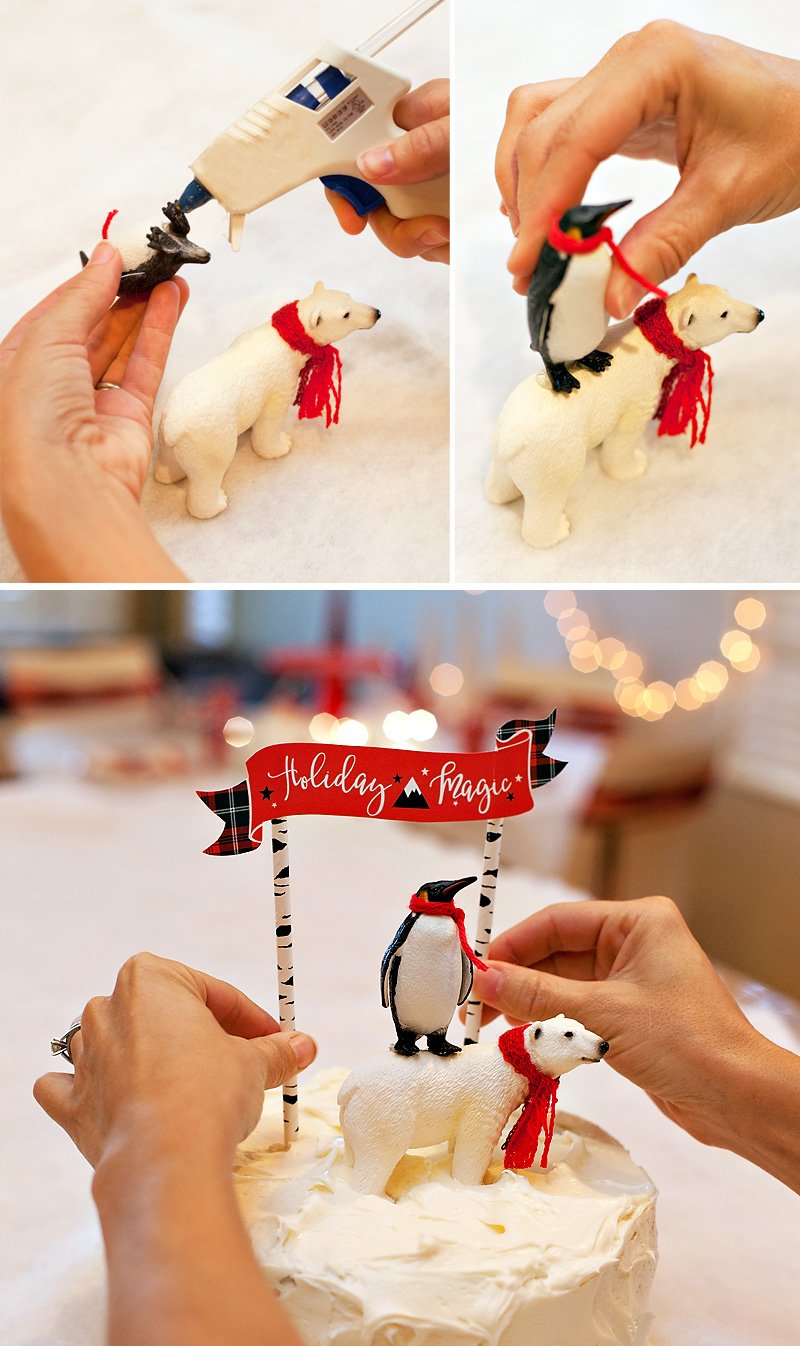 For the finishing touch, I designed a little “Holiday Magic” scroll banner and attached it to some cute birch straws. You can download the printable banners here. (There are actually 2 versions in case you want to make your cake topper double-sided. The 2nd banner faces the opposite direction and reads “Bring on the fun!”)

I couldn’t resist expanding the “snowy fun” a bit further, so here are a few simple ideas for setting a coordinating table for a special family night or holiday party. 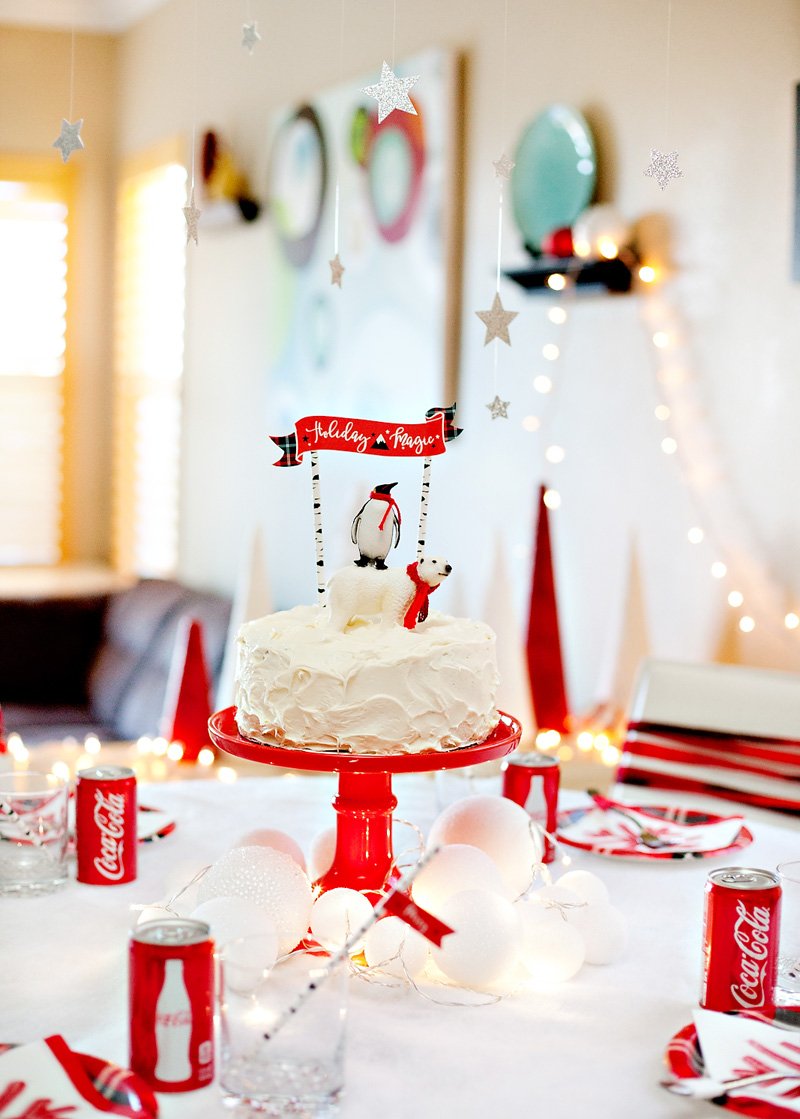 My very favorite detail of this set up is the glittery stars hanging above the cake!

It’s kind of hard to see them in the pictures, but I used a craft punch to cut stars from silver glitter paper, then attached them to fishing wire and hung them from the light fixture above our table. My kids were particularly happy with this decoration too. ;) 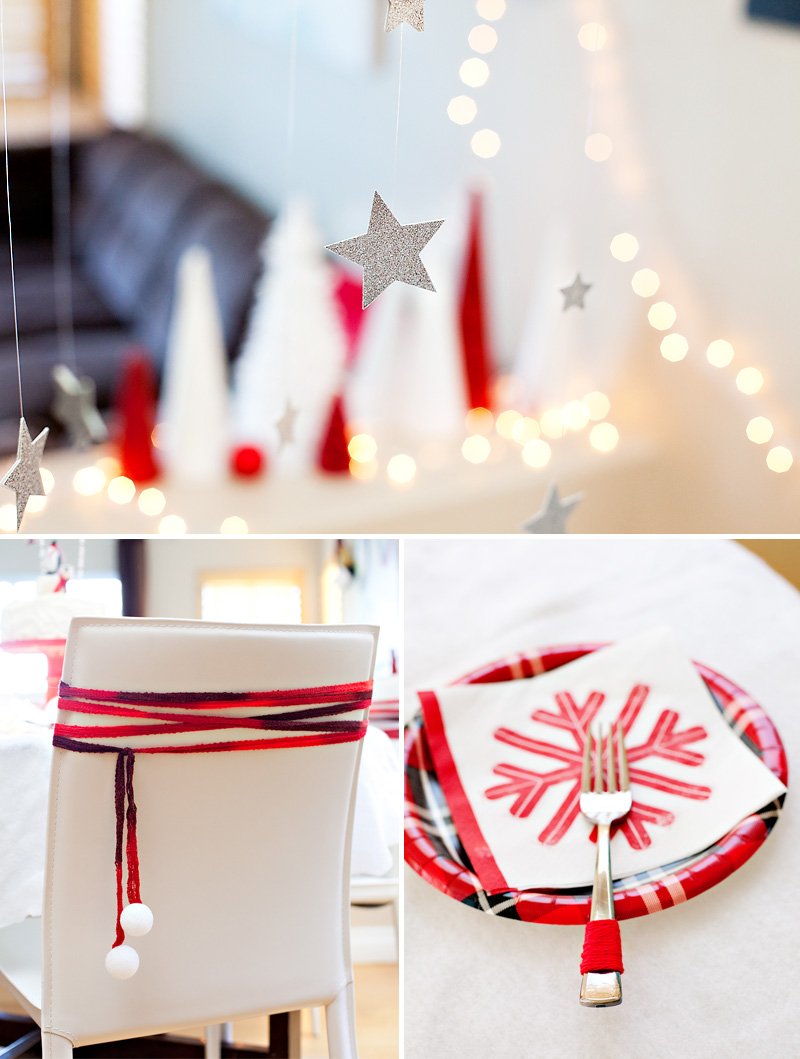 Yarn is one of my favorite elements for holiday decorating! I used a wide-than-normal, ombre yarn to decorate the chairs, and hot-glued small styrofoam balls (that look like snow balls!) to the ends of the yarn. The dessert forks were embellished with a standard red yarn as well.

The plaid plates and snowflake napkins are from Target, and I set Coca-Cola mini cans at each place setting. They’re the perfect tie-in the cake… not to mention an adorable “decoration” themselves! 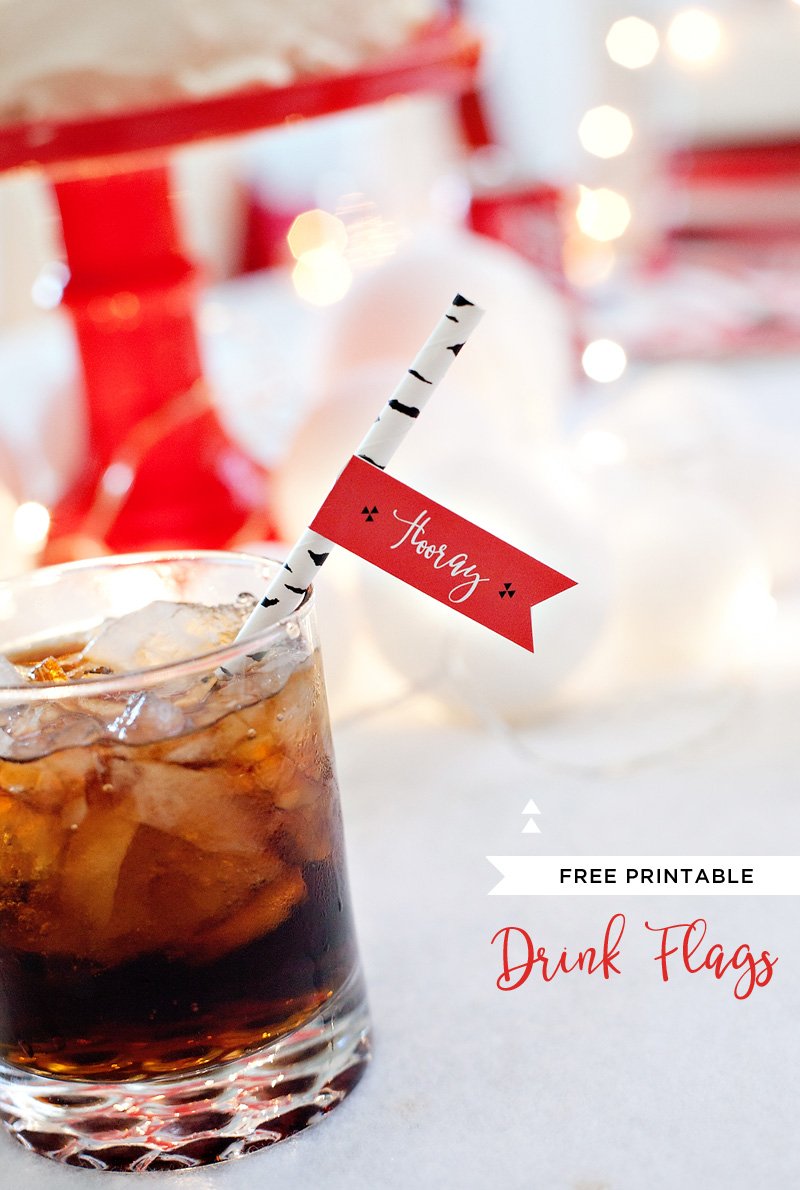 The mini party flags used on the straws are included in the free printables, too. There are 4 styles (2 red, 2 white) – and they read Hooray, Jingle, Merry, and Happy. I folded them in half and hot glued them to the straws. 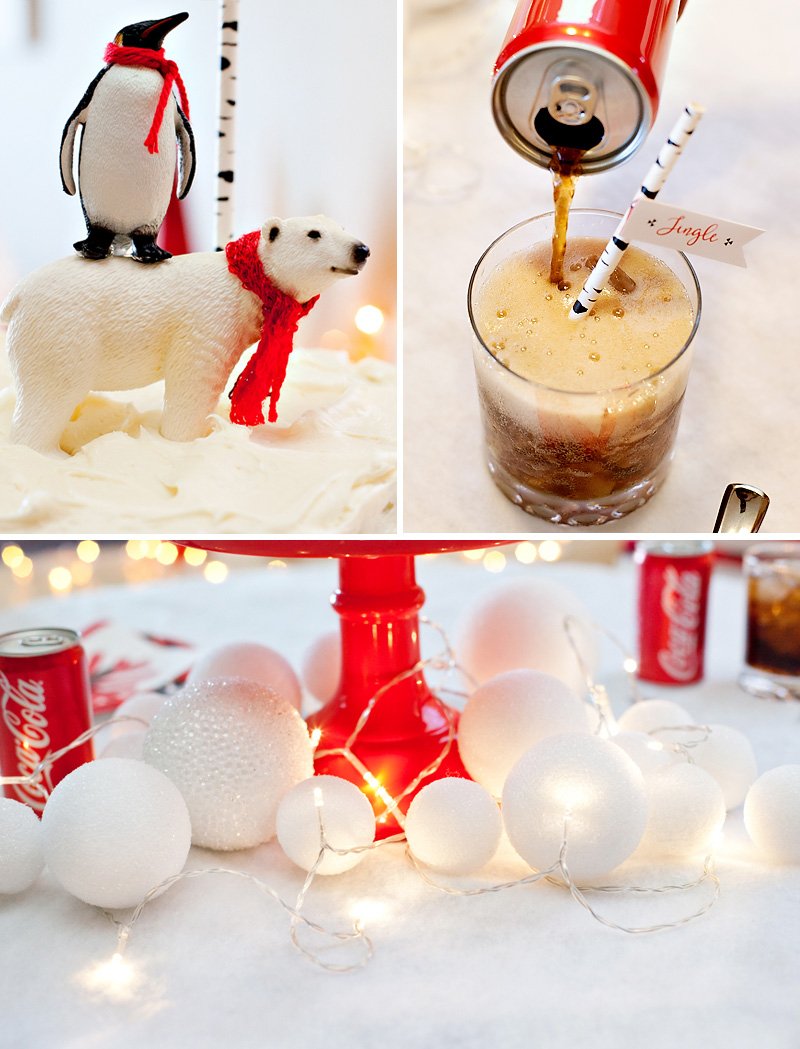 The cake is really the centerpiece of the table, but I added some styrofoam balls (+ one “snow” ornament I had on hand) around the base of the cake stand to add to the snowy feel.

Speaking of snow… I should probably mention that the “snowy tablecloth” is actually quilt batting! I just laid it over my table then cut around the edges to make it round. It definitely doesn’t need to be perfect!

And NOW… it’s time to dig into the cake and *eat up* some of this holiday magic. 😉 Enjoy! 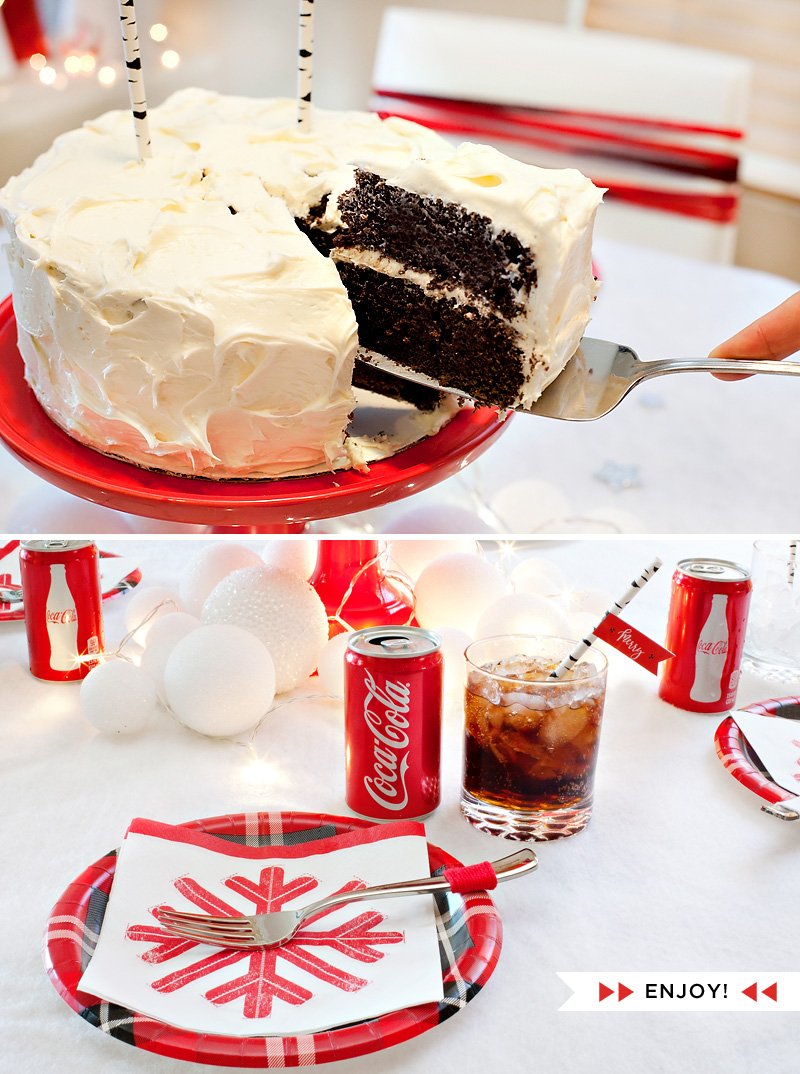 Disclosure: This post is sponsored by Coca-Cola. As always, all thoughts and designs are my own. Thank you so much for supporting the companies that make it possible for me to keep the creative content coming your way!