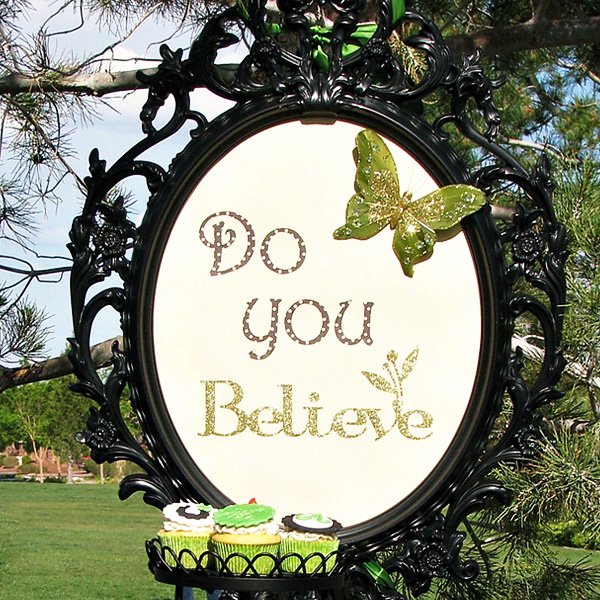 Excited to share a little fairytale magic with you today! This Peter Pan inspired FINDING NEVERLAND Birthday Party that Lynlee of Lynlee’s Petite Cakes created for her daughter’s birthday is full of charming, magical details for boys and girls alike… from Pixie Juice and Pirate Treasure to Neverland Cupcakes, Crocodiles, Mermaid Lagoon Sand Art, and more!

In a nod to the Peter Pan story and the Finding Neverland movie, she even turned the banquet tables into “beds” and used a dresser as the dessert buffet! And the kids even learned out to “fly” by sprinkling pixie dust and jumping on the trampoline… how FUN! Suffice to say, no detail was left undone. 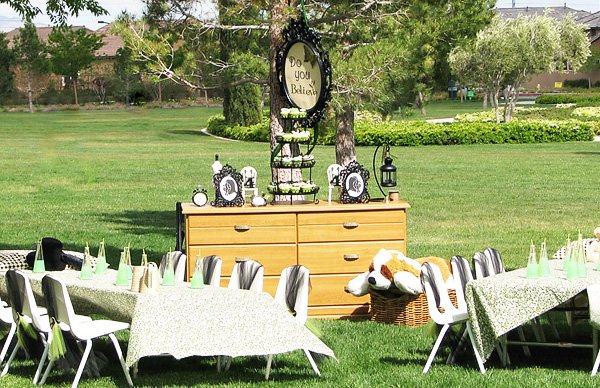 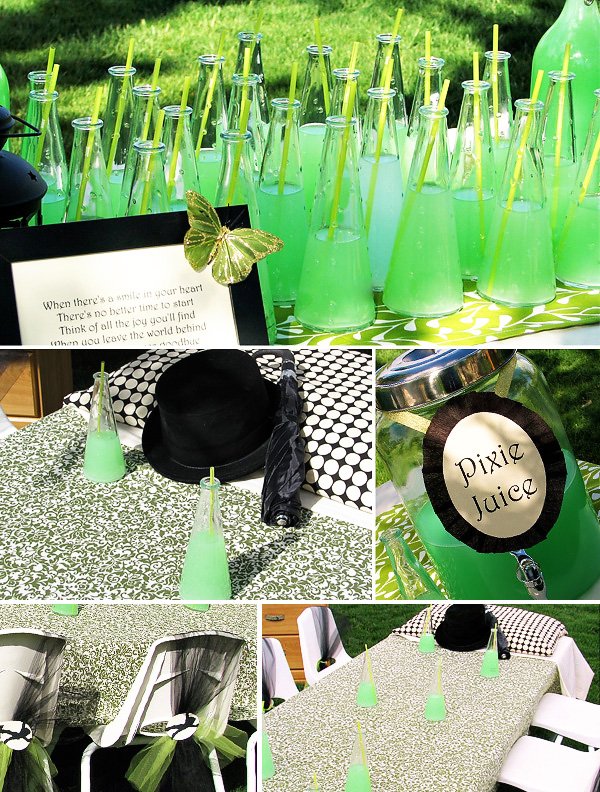 Read on for LOTS {and LOTS!} more magical images + all the whimsical, creative party details! 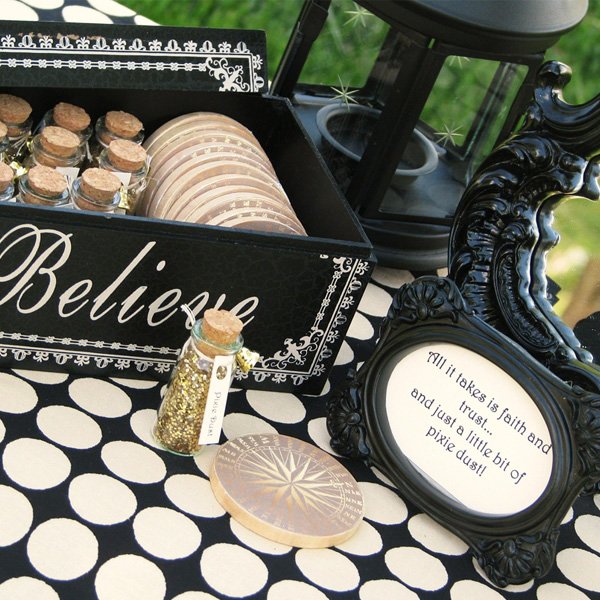 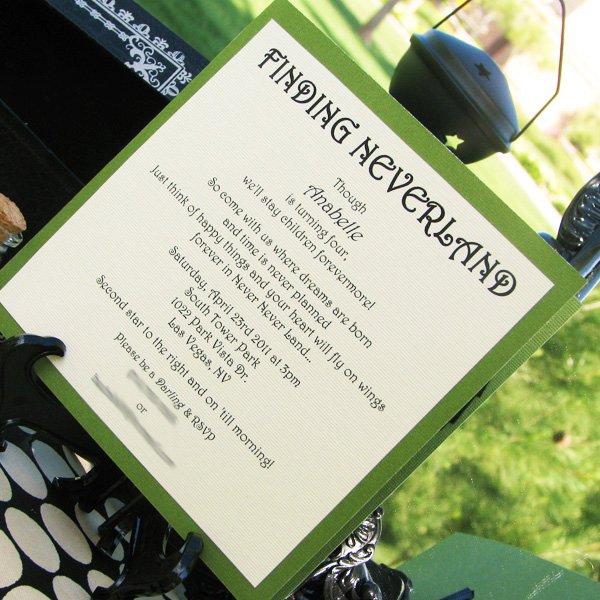 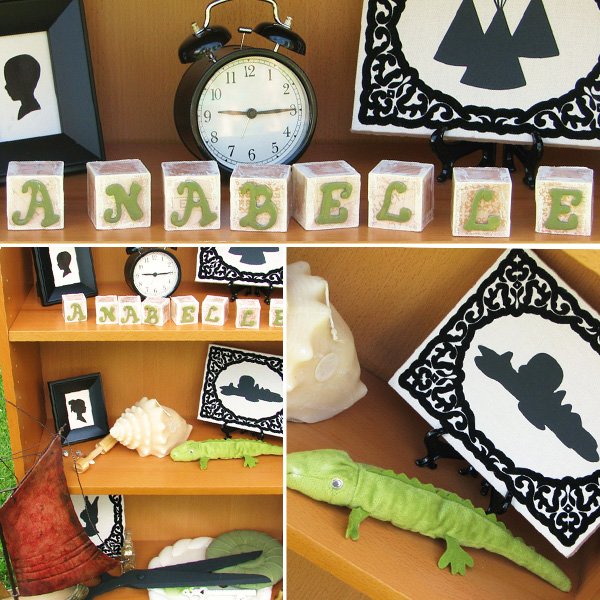 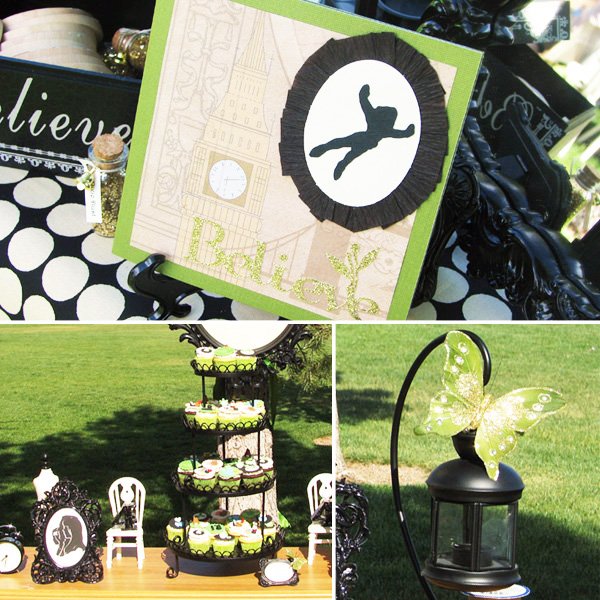 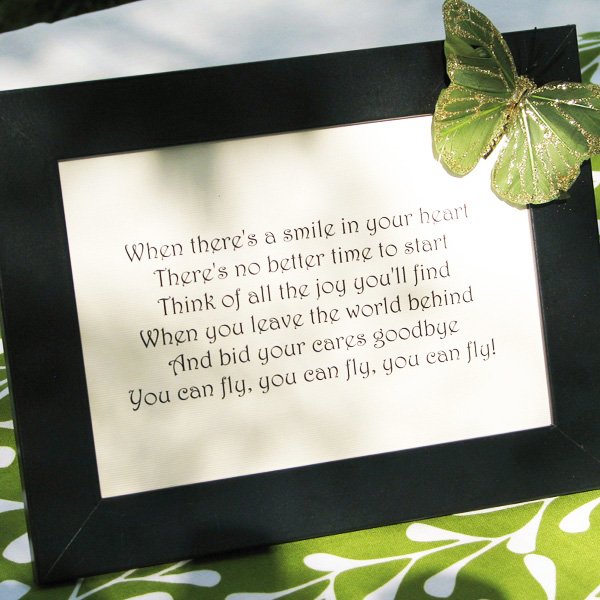 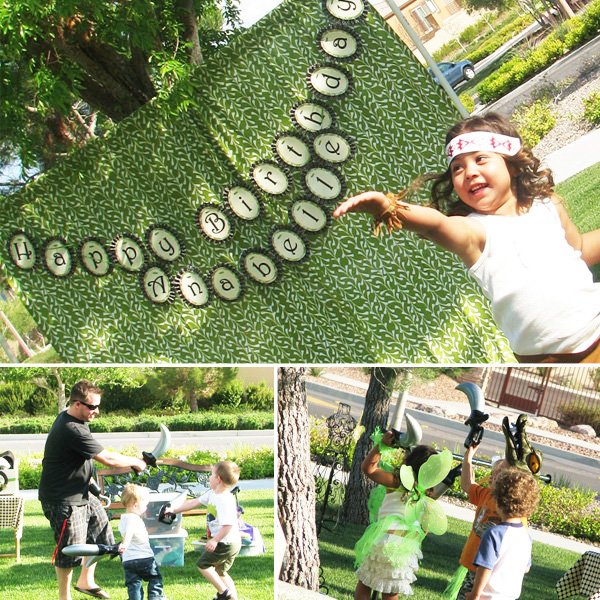 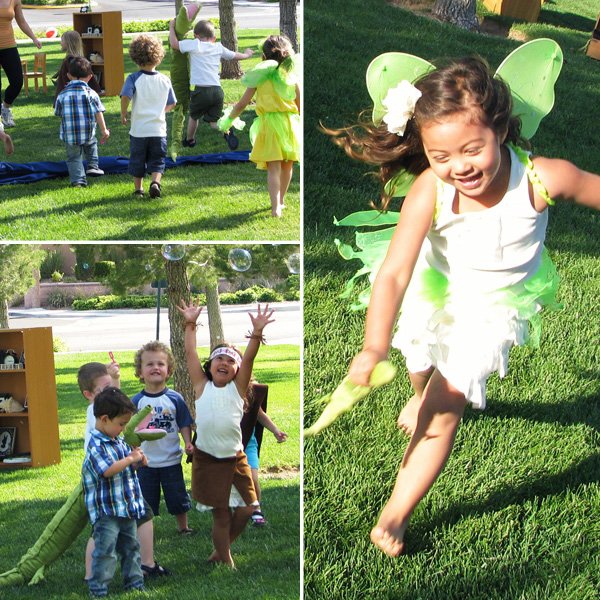 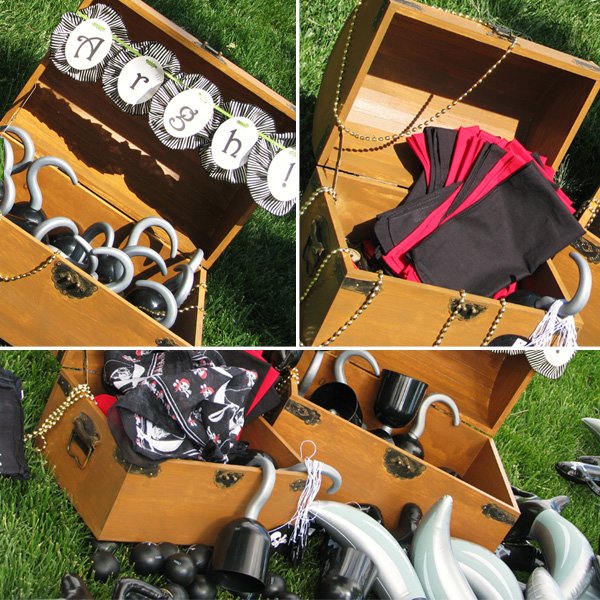 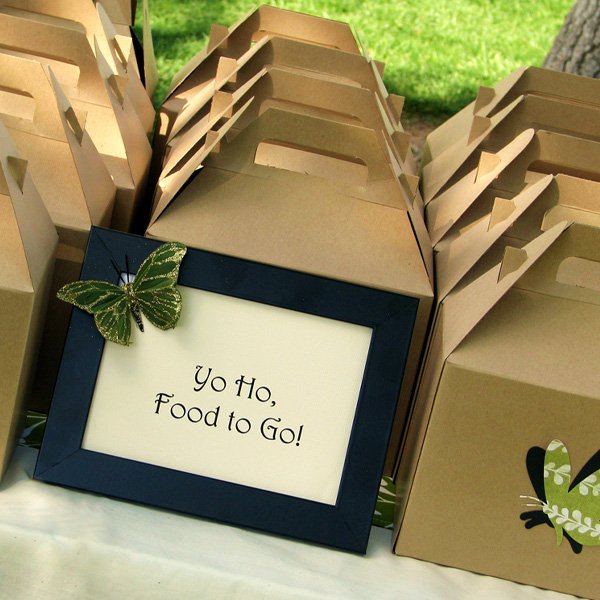 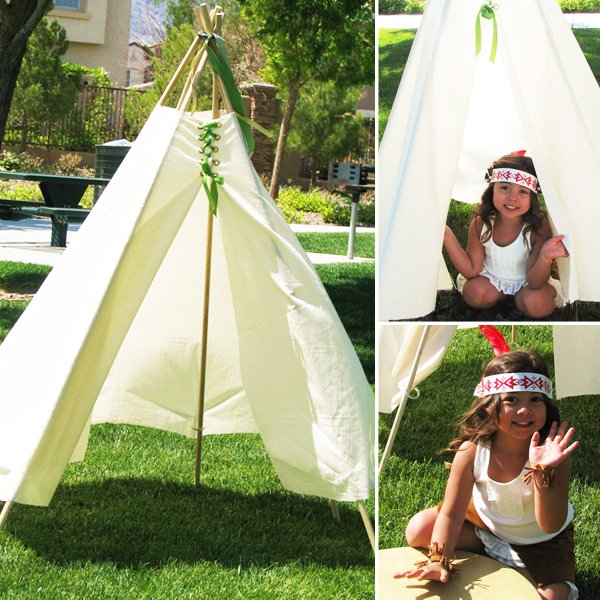 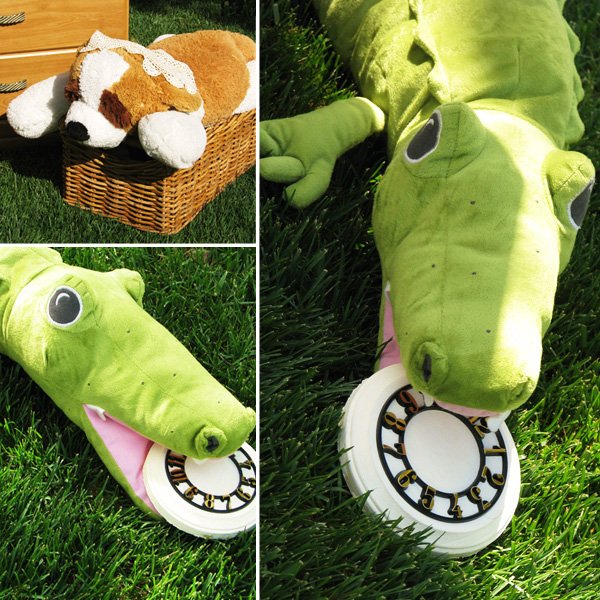 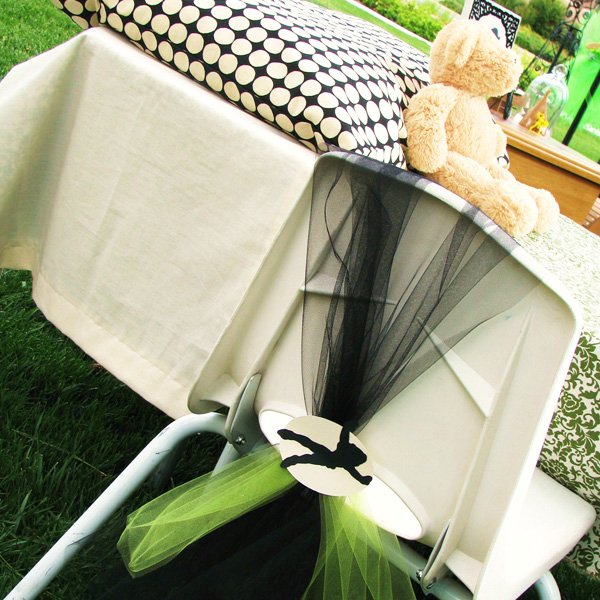 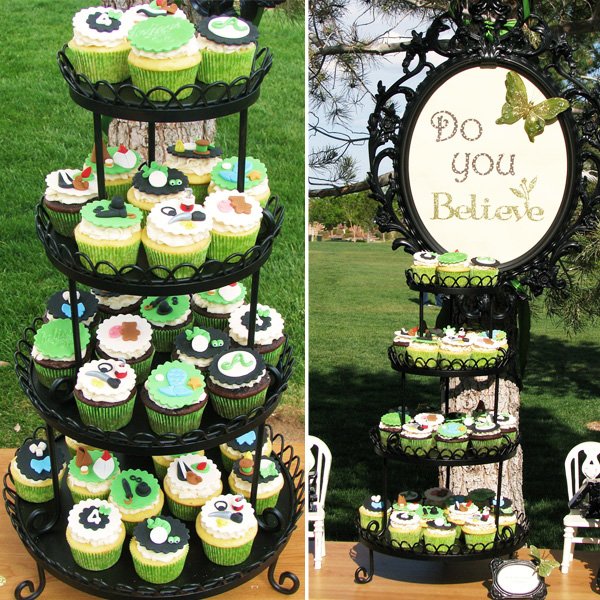 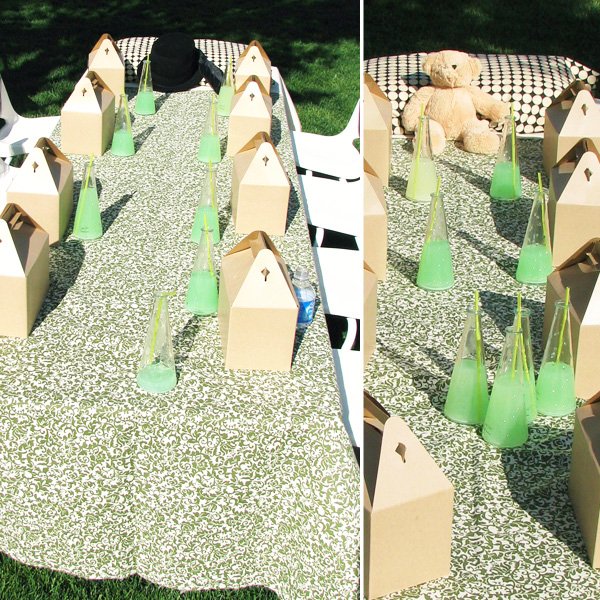 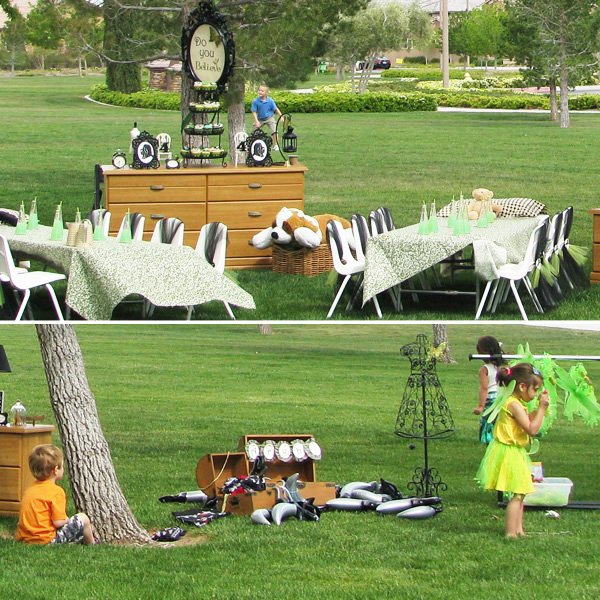 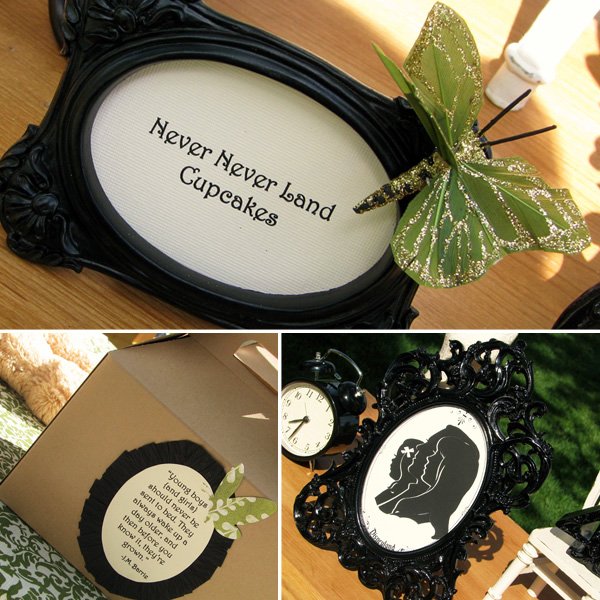 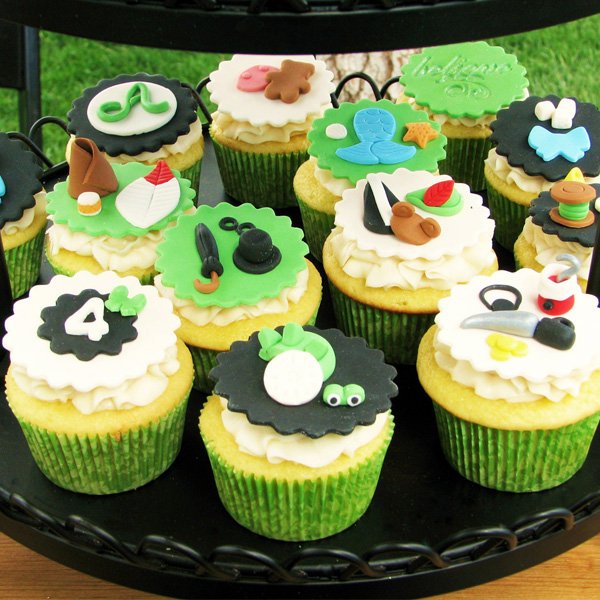 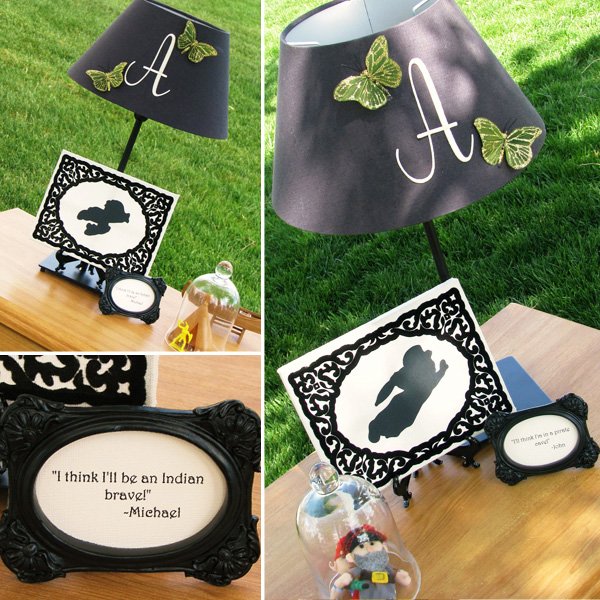 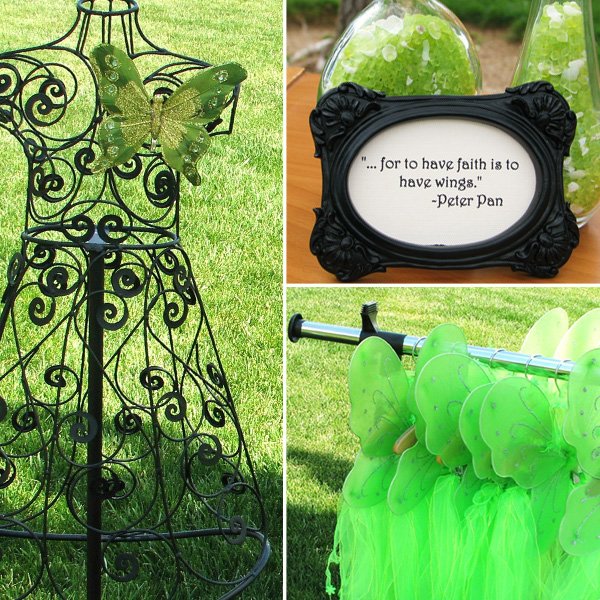 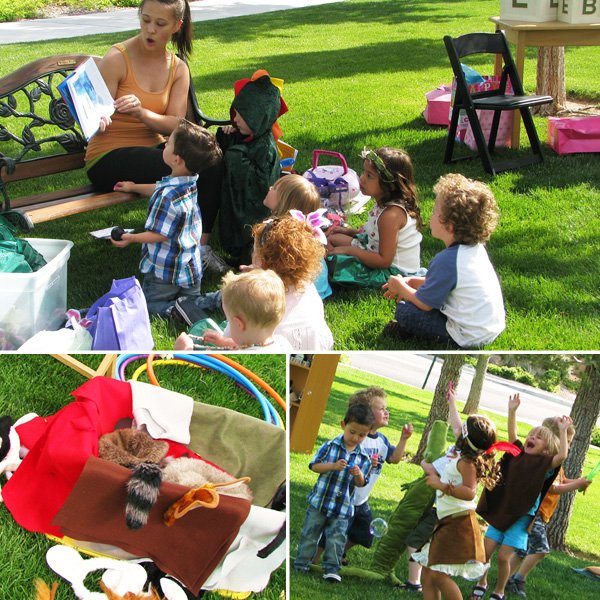 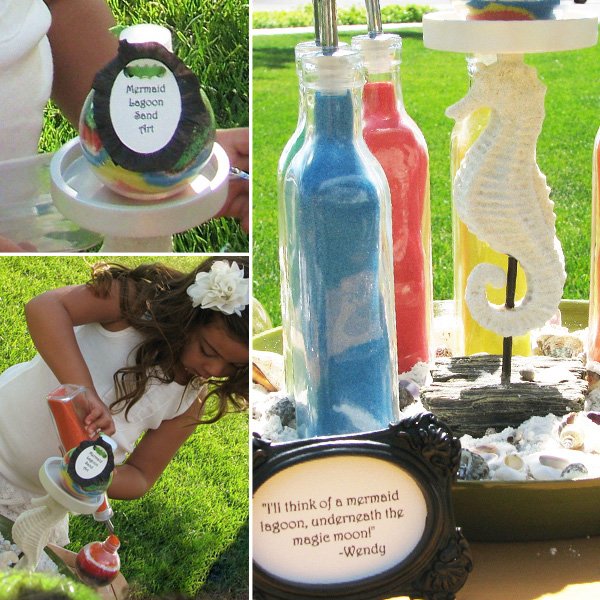 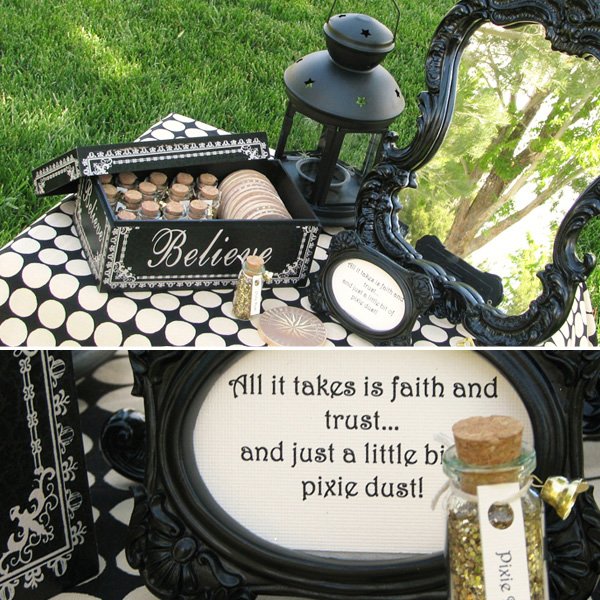 PARTY DETAILS, as told by Lynlee…

“My daughter, Anabelle, was turning four this year and when we were deciding on a theme for the celebration, we wanted to find one that appealed to her and also would work for a co-ed party since many of her friends and their siblings are boys! Thus, we finally settled on a Neverland premise, which would appeal to all the guests – male or female… young or old!

The Peter Pan story provided so many ideas, but also required a little bit of narrowing because of the vast array of possibilities! To aid me in focusing my thoughts, I drew inspiration from one of my favorite movies: ‘Finding Neverland‘. The movie follows Peter Pan’s author, J.M. Barrie, as events in his life in the Victorian era motivate him to write the enchanting play.

From there, I concentrated on the overall Victorian feel with ornate, black décor in the Darling children’s nursery, contrasted with nature and trees at the party’s location to represent their journey to Neverland. I also utilized numerous silhouettes, corresponding to this time period, and also representing Peter Pan’s search for his shadow. I wanted the children to feel as if they were being transported to this magical land and encourage them to believe…

In creating the invitations, I utilized a scrapbook paper background that depicted London’s landmarks (most notably Big Ben) and added a silhouette of Peter Pan flying, along with the word ‘believe’. The images and green, black and cream colors set the mood for the party, while the wording inside invited guests to ‘…come with us where dreams are born and time is never planned… just think of happy things and your heart will fly on wings forever in Never Never Land.’

The party took place at a local park and the focal point included two ‘beds’, anchored by a dresser, to set the mood of the Darling’s nursery. The beds were actually kids tables where they would dine and inspired by none other than Jenn from Hostess with the Mostess! The beds were made to look like they belonged to the Darling boys, John and Michael, and both the décor on the bed and the respective nightstands corresponded to their accessories and roles.

The small chairs were dressed up with black and green tulle with a Peter Pan silhouette. My mother was a tremendous help with her remarkable sewing skills! At the beds, the young guests were offered green pixie juice in vases from Ikea, as well as a lunch served in kraft gable boxes, including small sandwiches, cheese sticks, green grapes and of course, some Pirate’s Booty popcorn! We had additional lunch boxes and pixie juice for the adults at a separate table.

The dresser came from my home and included the dessert, as well as decorations, including silhouette cut-outs of Anabelle, my husband and myself that we had done at a trip to Disneyland! I debated on an entire dessert table selection, but decided to focus on my specialty: cupcakes! The chocolate and vanilla cupcakes were garnished with fondant toppers representing all the characters from Peter Pan. Above the dresser was the ever-so-popular party frame, Ung Drill, from IKEA with the question ‘Do you believe?’

To aid the children in imagining and navigating through Neverland, I hired Ms. Louisa from the fabulous and enchanting Fairytales & Tutus ballet studio my daughter attends to read Peter Pan and transport the kids from the nursery into Neverland. I had fairy wings and tutus available for the girls, as well as pirate gear (scarves, eye patches, hooks and inflatable swords) in treasure chests that my father helped to stain. Ms. Louisa also brought additional costumes, such as mermaids, Indians, and the lost boys, just to name a few! The children were free to choose their outfits, which was so fun and added to the imagination-play, as my daughter had three costume changes throughout the party!

I filled little jars with pixie dust and made little wooden compasses for all the children. After hearing the story, they learned to fly by sprinkling the magical dust and jumping on a trampoline! Ms. Louisa then led them through activities from sinking pirate ships with cannonballs at Skull Rock, jumping over the crocodile, swimming through the Mermaid Lagoon with bubbles and a pow wow at the Indian Camp. Ms. Louisa’s presence at the party was invaluable, as it allowed the kids to play all together and utilize their imagination, while the parents watched and enjoyed without worry. I cannot thank Fairytales and Tutus enough for helping the children (and adults) to believe.

I added to the nursery/Neverland décor with a bookcase and additional furnishings, such as clocks, ships and wooden blocks I made with Anabelle’s name (from a DIY tutorial seen on the Martha Stewart website. I placed quotes from the characters with the décor in small frames and silhouettes cut out with the Disney Classic Cricut cartridge attached to canvases – both purchased from Michaels. Stuffed animals, such as a crocodile and dog to stand for Nana, softened up the decorations. One of my favorite elements included two tee pees we made from instructions on the site Sew, Mama, Sew! Another hit with the kids was a table I set up at the Mermaid Lagoon with plastic bubble bottles they could fill up with colored sand.

Since imagination and costumes were already enormous components of the party, we could not do without a photo booth! With the help of my parents and their piping and sewing talents, we created a backdrop, which I embellished with a ‘Happy Birthday, Anabelle’ sign I made. The props were stored in a mini toy box I bought from Hobby Lobby and painted, along with another frame and a sign to be held up reading ‘believe’.

Lastly, the favors were stored in oversized wooden blocks (also from Hobby Lobby and painted) on a beautiful table my father-in-law made. The guests were sent home with shadow puppets I cut out from my Silhouette and glued on wooden sticks, along with a flashlight and a Peter Pan book to read the story over and over again. And, since it was such an inspiration and a movie that makes me cry every single time I watch it, each family received a ‘Finding Neverland’ DVD with the final quote from the movie: ‘Just Believe’.”