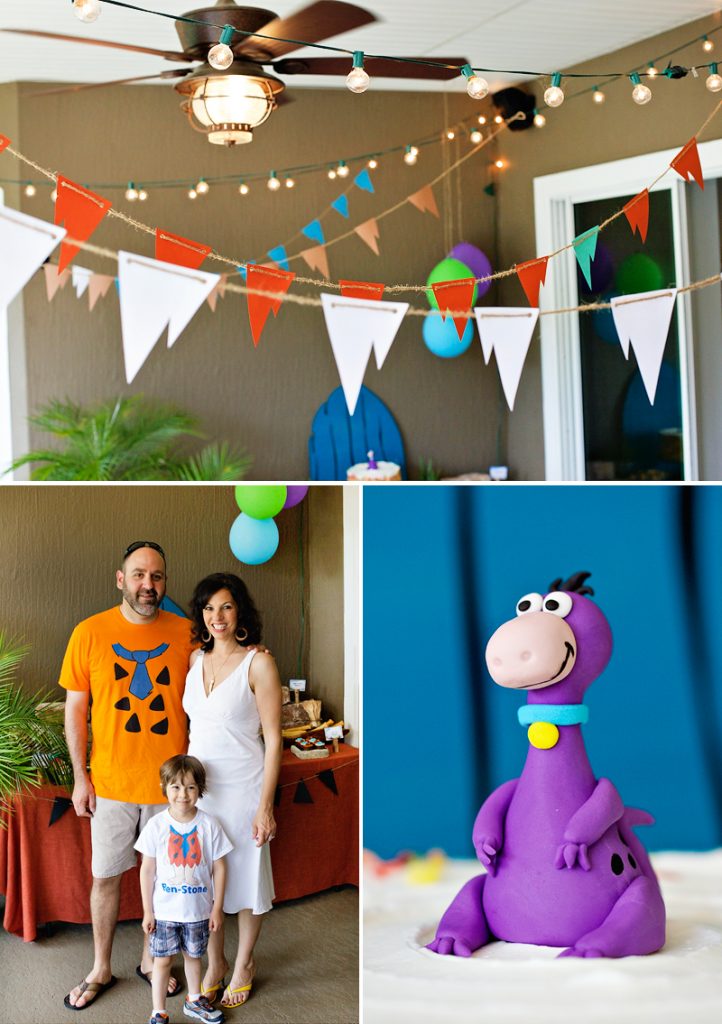 Before now, if you searched for a “Flintstones” party on HWTM, you’d get a ‘not found’ message, but TODAY, this YABBA DABBA awesome 5th birthday celebration will pop right up. :) After 9 years of blogging, it’s very difficult to find a theme not yet explored!

Fortunately, Elissa Stone of One Stone Events threw her son – Ben Stone – a Classic Flintstones Birthday Party that totally {Bed}ROCKS! So, if you loved the show, Fruity Pebbles cereal, or are just feeling nostalgic about the early 1960’s, then prepare to hop into the foot mobile and head back to the stone age in style…

P.S. Love this look? Check out some of our other favorites from Elissa too: How I Met Your Mother, Glamping Birthday and Feathers & Arrows. 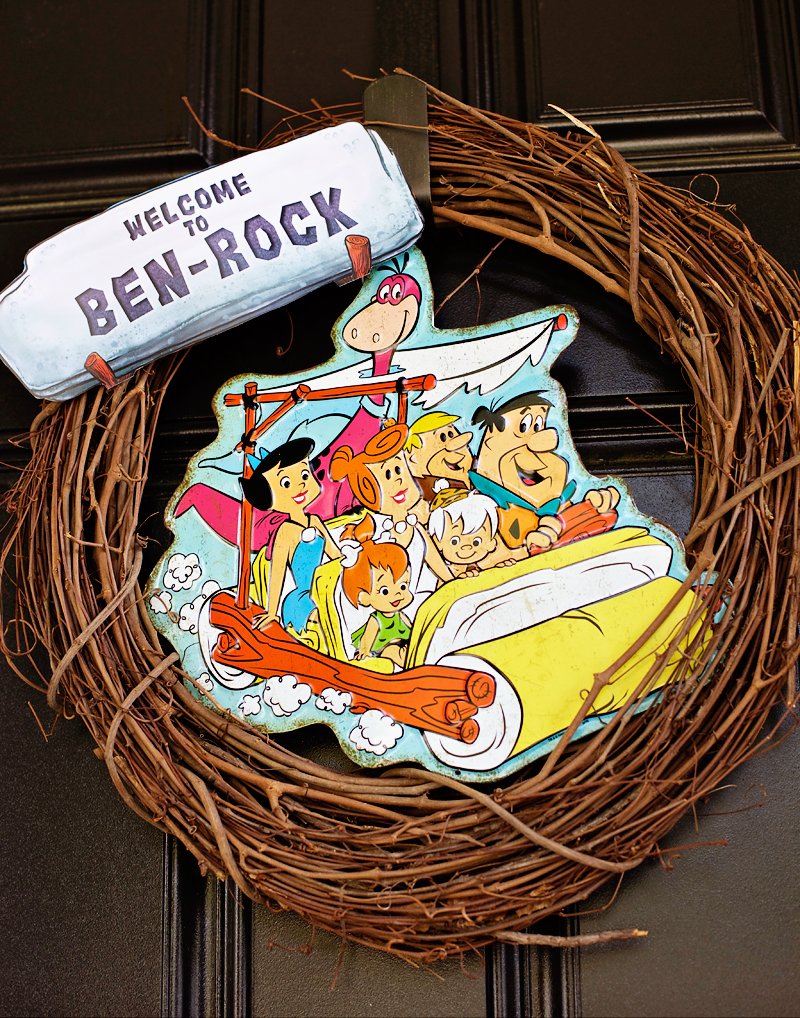 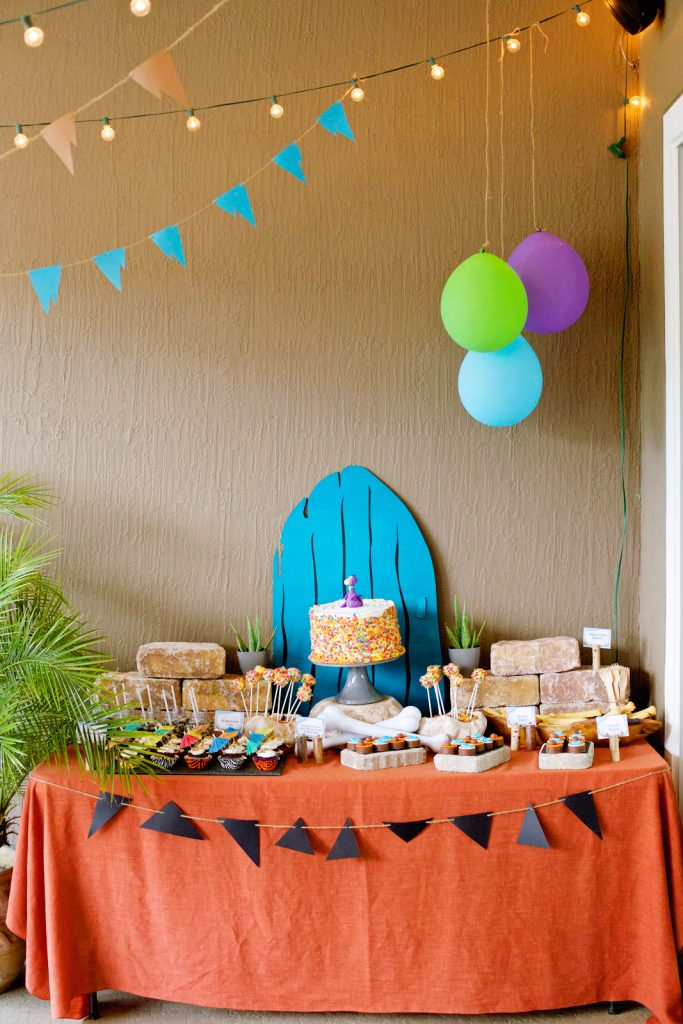 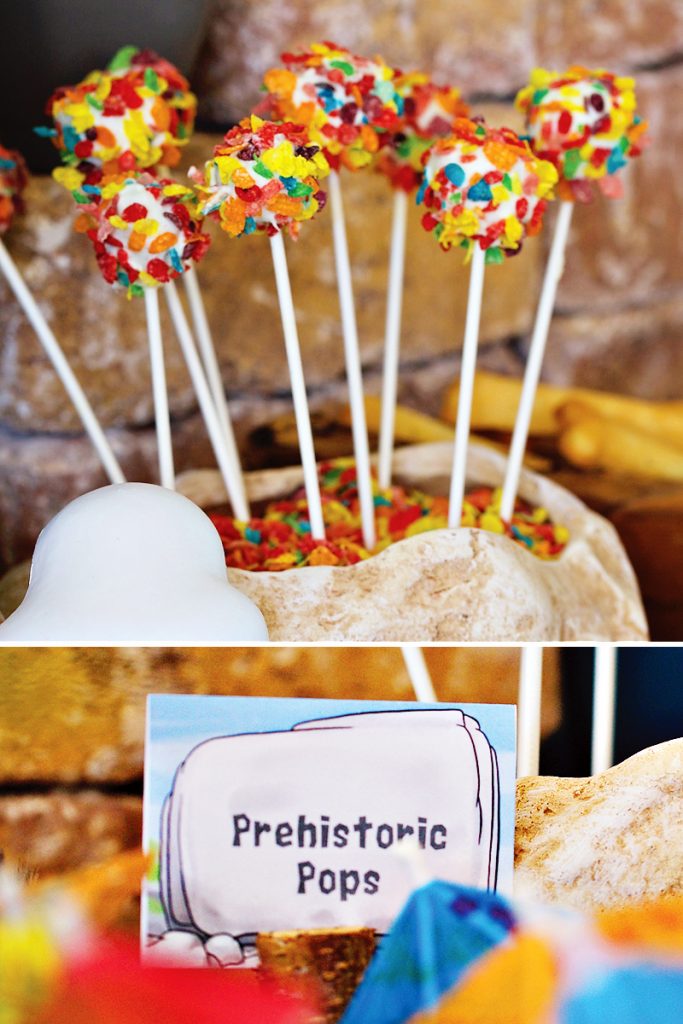 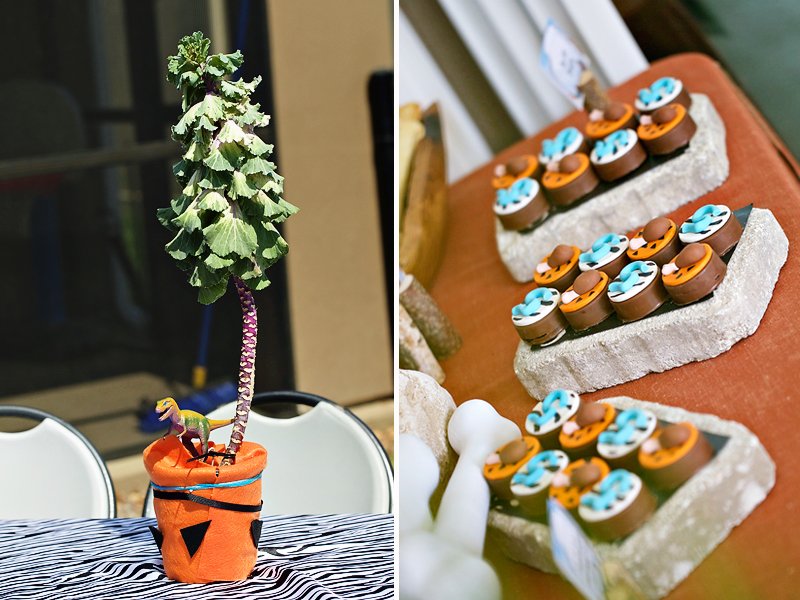 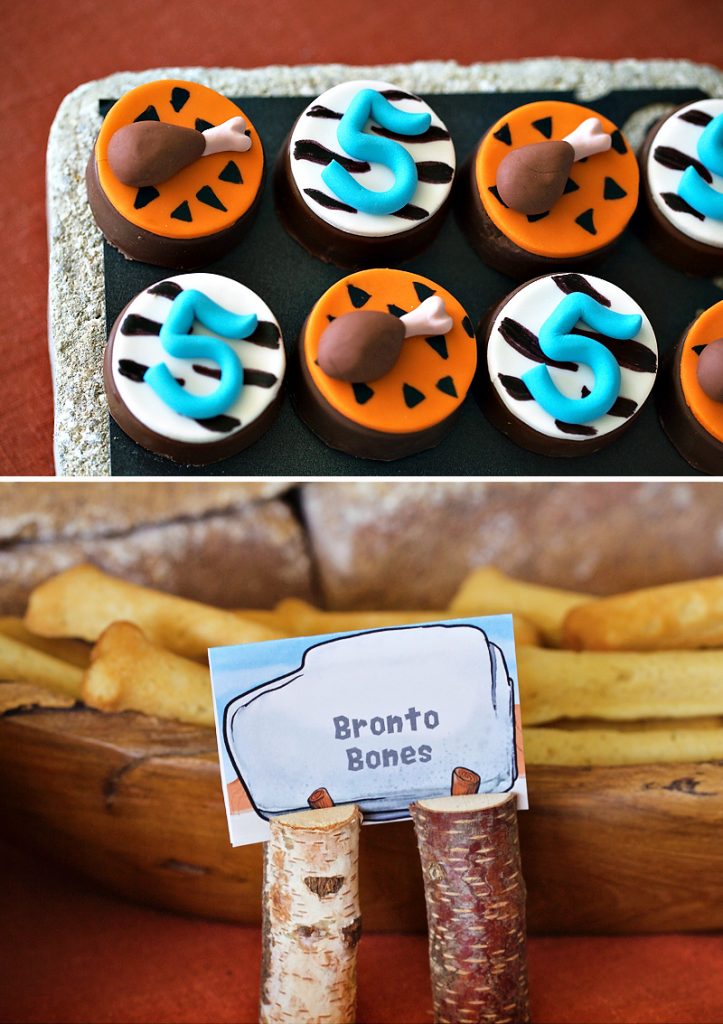 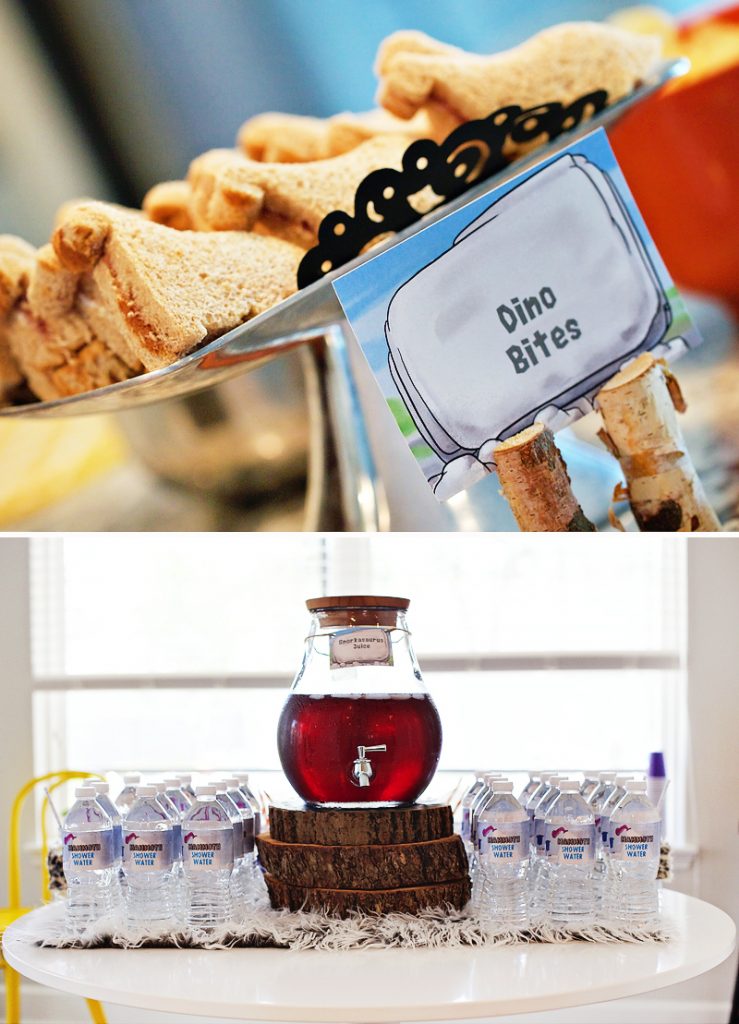 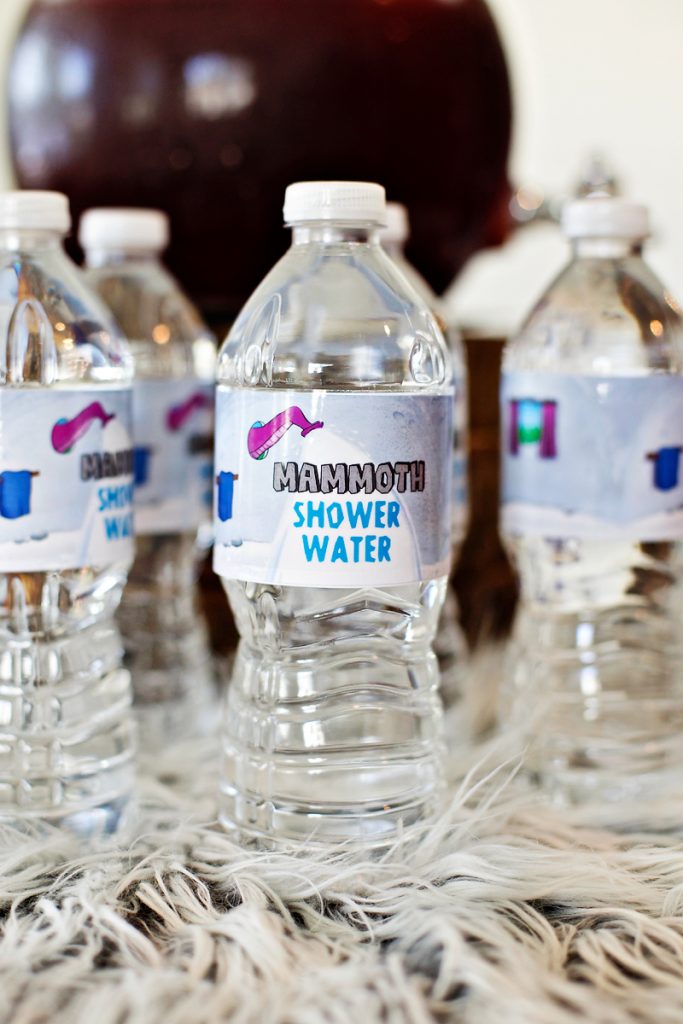 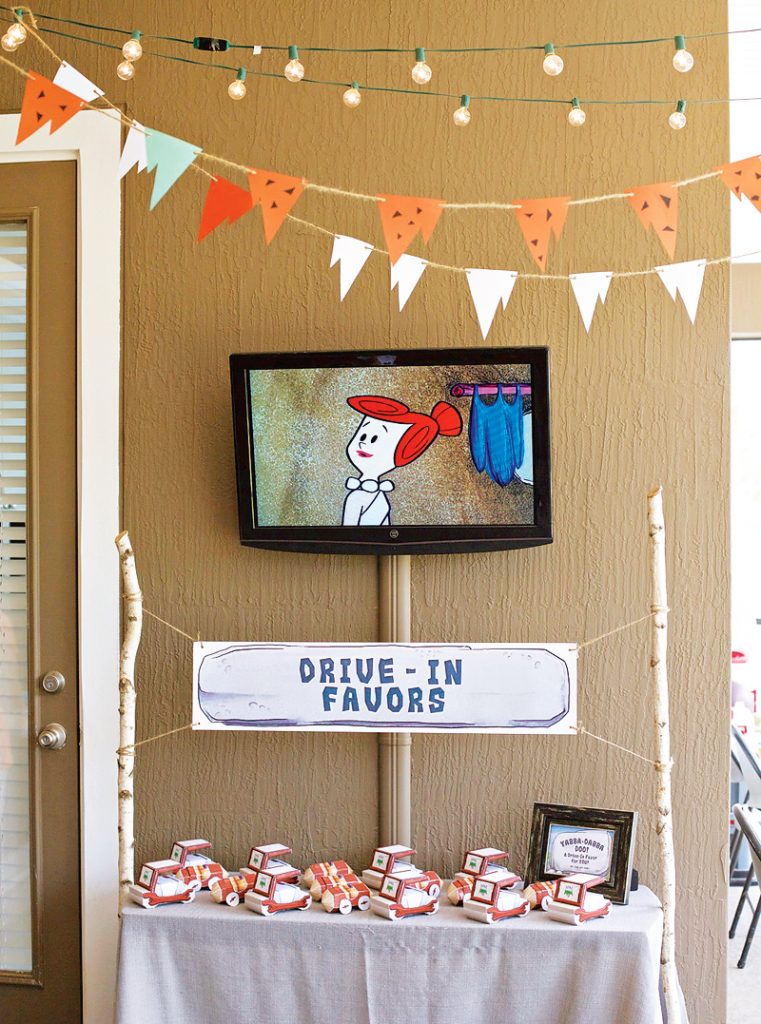 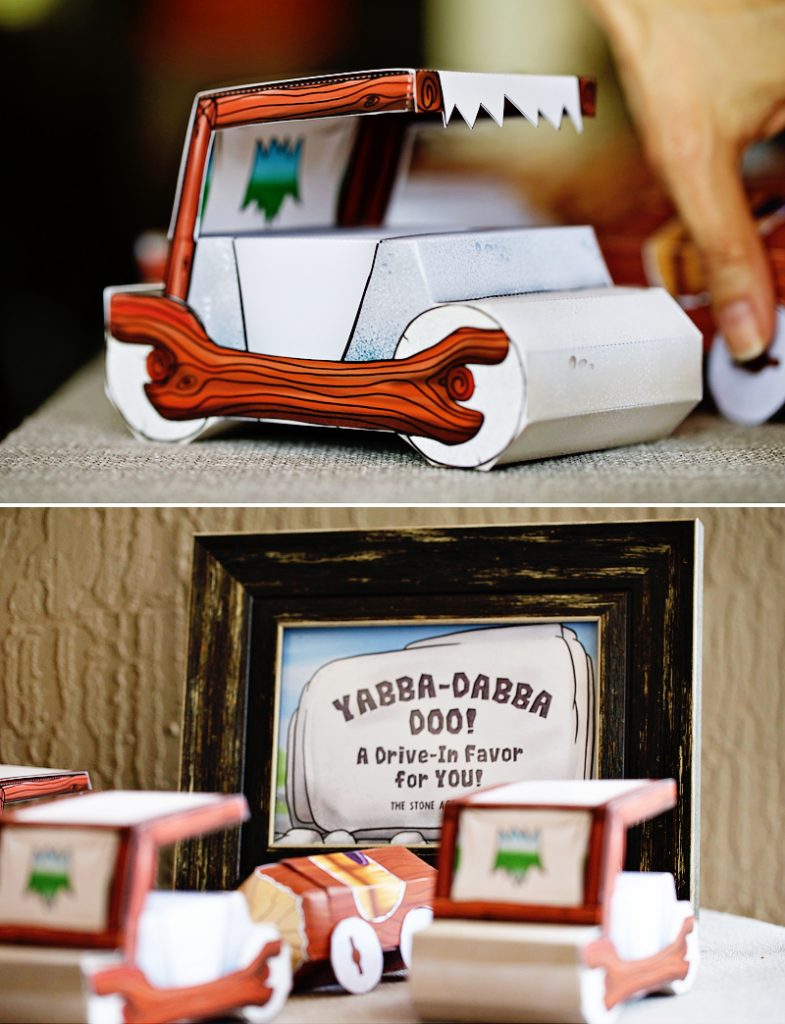 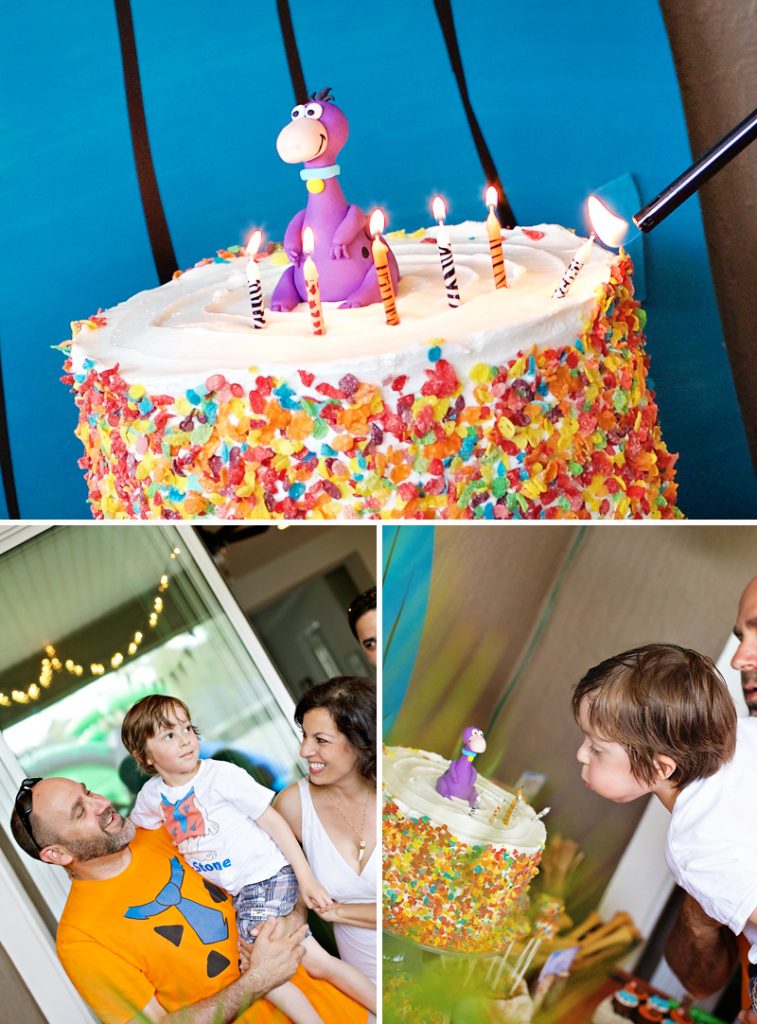 PARTY DETAILS as told by Elissa…

Two years ago, this was one of the ideas I had for our son’s birthday, who was turning 3 at the time. We opted for a ‘Feathers and Arrows’ boy fairytale mash up, thinking we might miss the trend, but it is still going strong.

My son never forgot about the Flintstones theme and insisted on having it for his 5th birthday, even though most of his friends probably didn’t know the Flintstones. Turns out many more of us nostalgic parents show our kids these old cartoons than I thought!

Since our last name is Stone, we thought it would be a fun play on words to use Ben-Stone and Ben-rock, and thus our Flintstones inspired party was born.

This was my attempt at a more ‘simple’ party. I’m really trying to pare it down these days because while adding photo booths, more kid’s activities and grand décor is fun, it’s a lot of work and a lot more money! And also, since my son has a severe food allergy, I had to do all the baking myself (minus the cake, which I had made at a local allergy free bakery). The kids still had a blast, or should I say, a yabba dabba doo time!

I sketched out a drawing of the dessert table, using elements from the original cartoon, including the door from the Flintstone’s house, which I had made by Ten23 Designs, who happens to live in my town! I wanted to use lots of Fruity Pebbles, so I thought of doing the cake pops like that and then went on Pinterest and found this cake covered in Fruity Pebbles and knew I had to have it.

Being familiar with the work of several graphic designers, I knew that no one could master this theme like Piggy Bank Parties. Working with them was a great experience and they went above and beyond for me .I asked them to create a Flintstones car favor box for me and they created two! They were one of my favorite details of the whole party. They also came up with some really cute and clever names for my desserts and food for me. I can’t say enough good things about their dedication, passion and talent.

A local friend who used to have a very successful fondant business created the Dino topper and Oreo fondant toppers for me, which helped give my dessert table a more high end, custom feel.

I kept the tables for extra seating simple with a funky plant and dinosaur centerpiece and found inexpensive linens online. I used lots of animal print and some tropical elements as well. My main DIY projects were the ‘character’ garlands I hand cut and the felt wrapped plants to mimic the characters. The kids spent hours in the bounce house (that had palm trees to match the theme) and did a ‘boulder toss’ (water balloons), and that was more than enough to keep them happy. We had a great time hosting this party in our new house with lots of new friends and neighbors. Lots of good memories were captured by my very talented friend, Lauren.