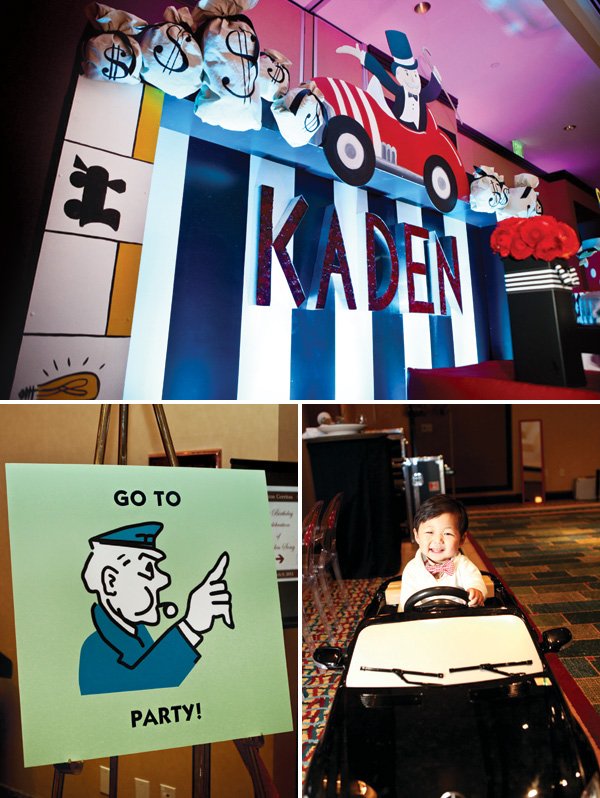 Wait until you see this. Sophia Kim Park of Petite Productions went all out for this incredibly creative Monopoly First Birthday Party. One of the best parts of “Kadenopoly” is the amazing, custom backdrop featuring the Monopoly Man himself, surrounded by bags of money, a giant game board and a 3D ‘Kaden’ sign. Some of the more formal details were also inspired by the Monopoly Man, like the bow tie folded napkins, top hat centerpieces and chocolate dipped tuxedo strawberries. This is one game of Monopoly that I would be happy to play for hours! 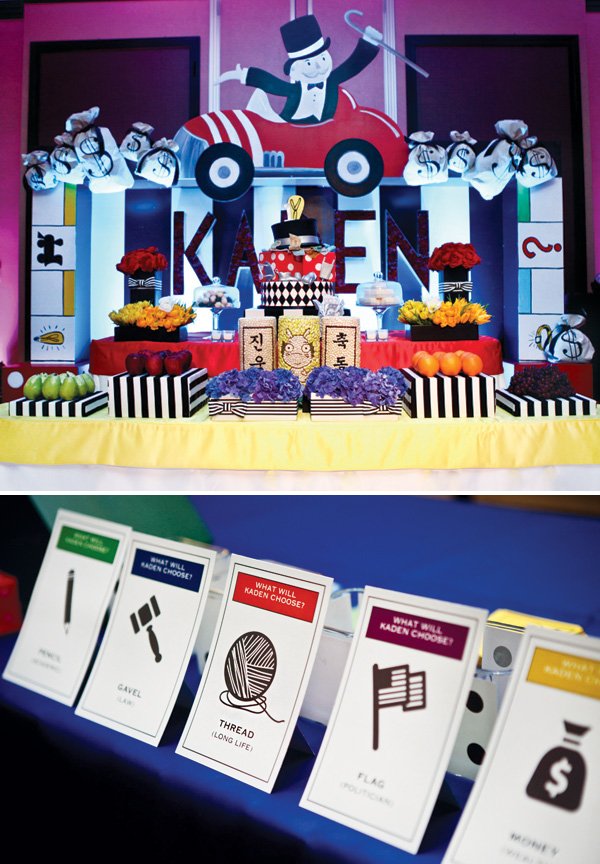 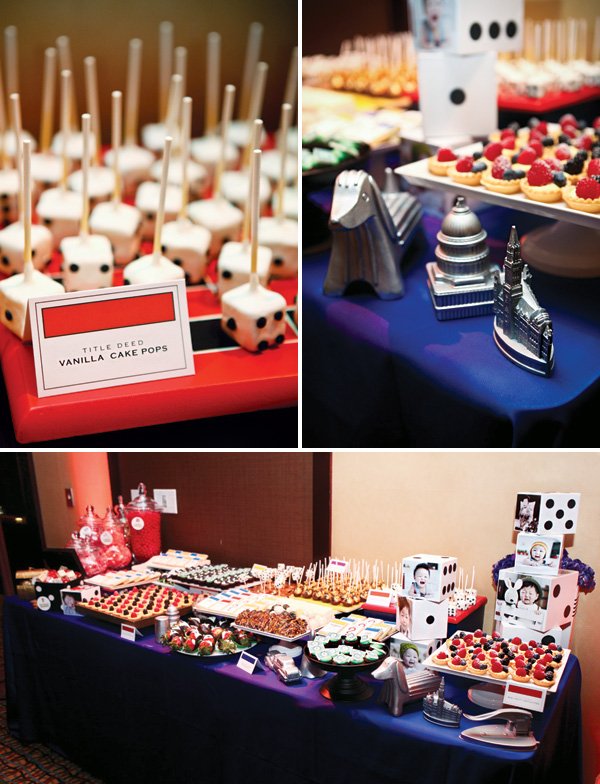 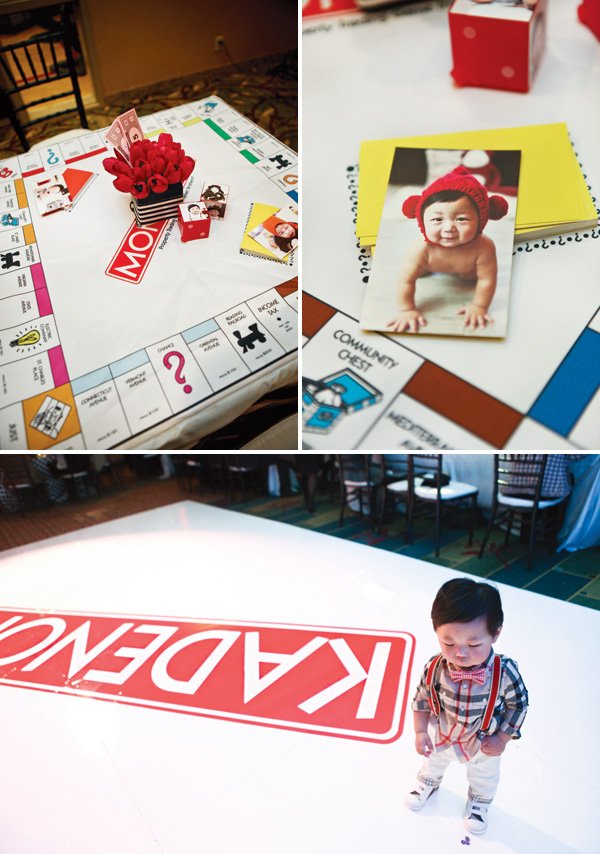 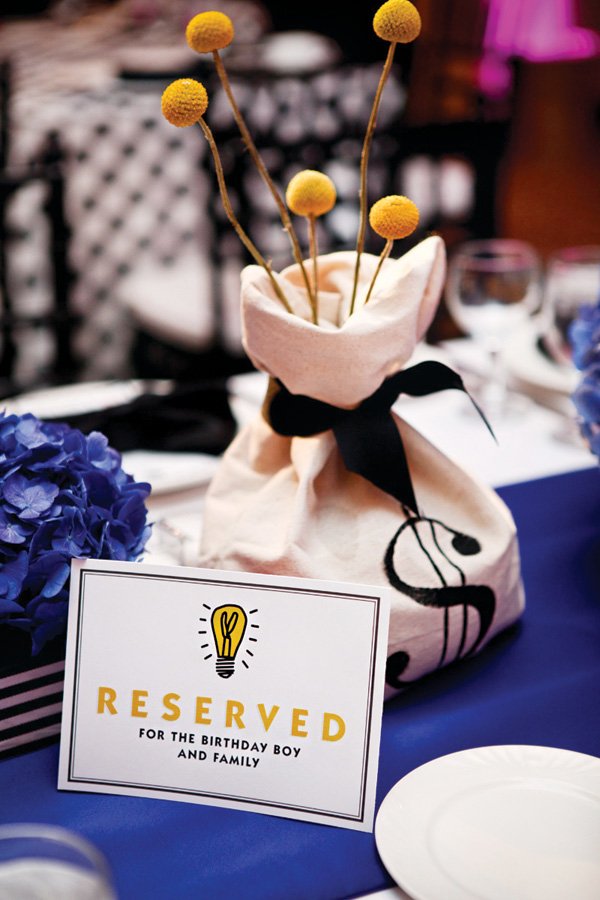 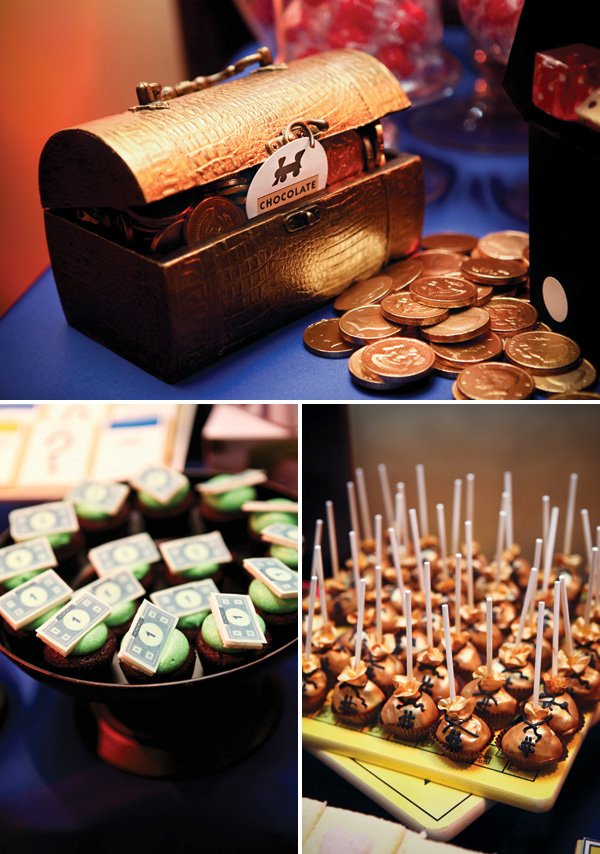 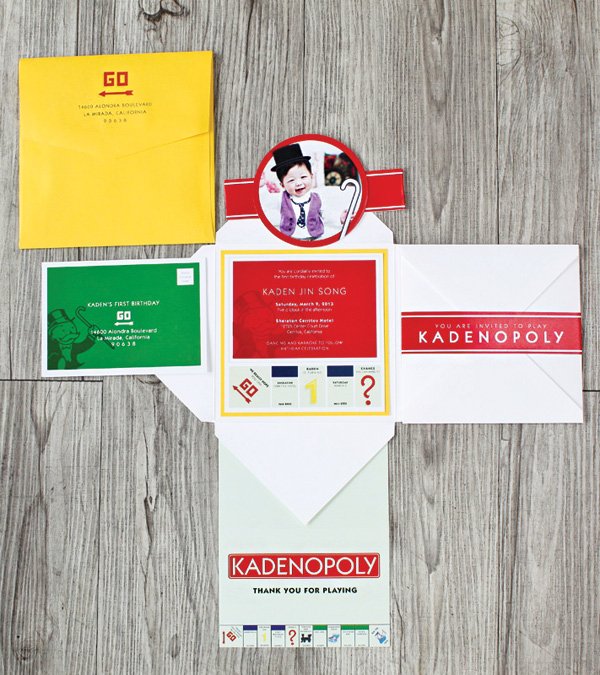 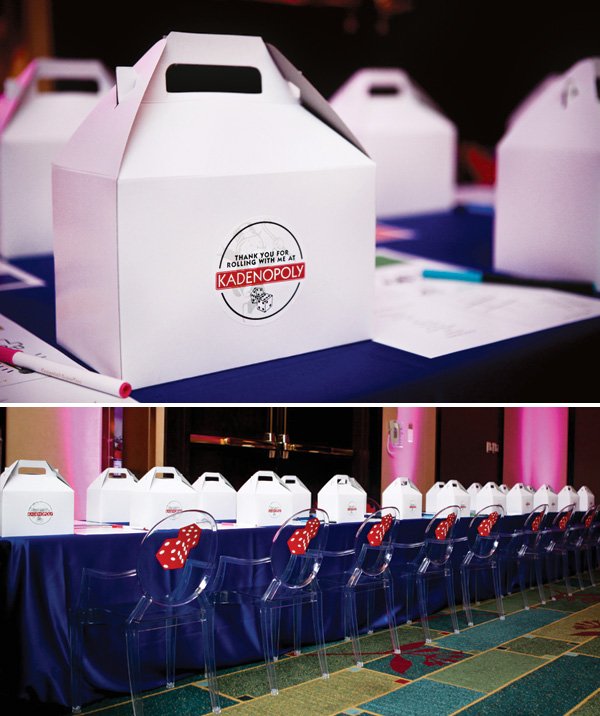 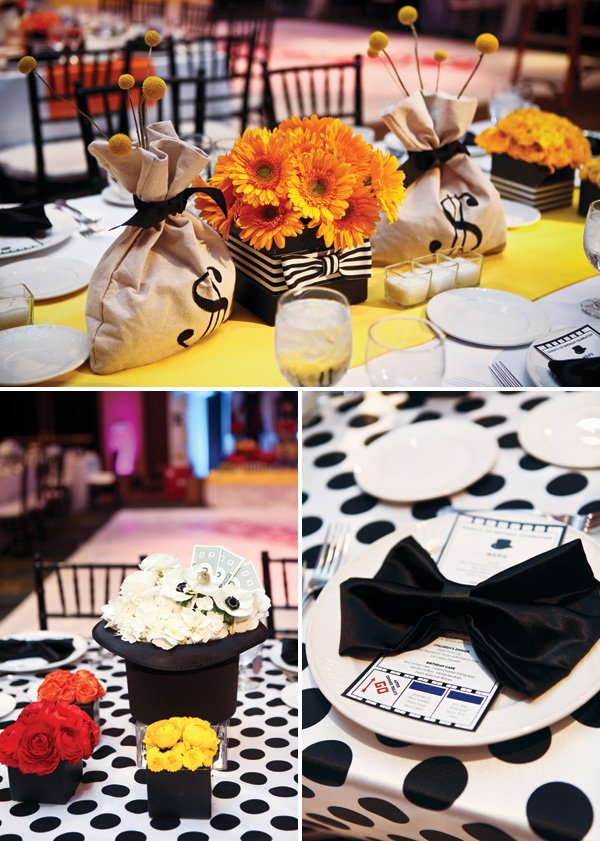 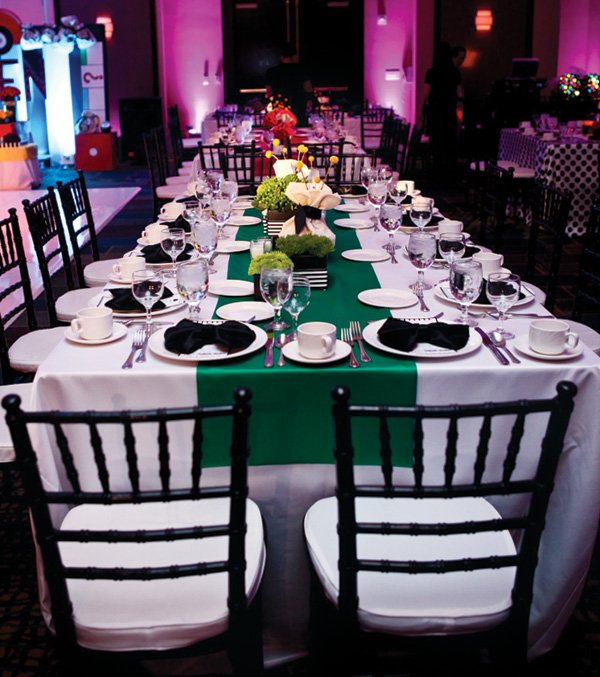 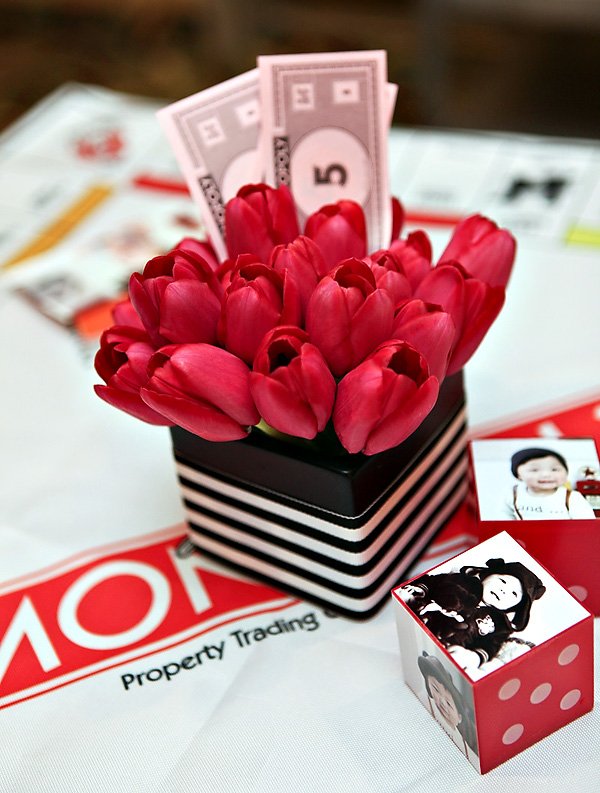 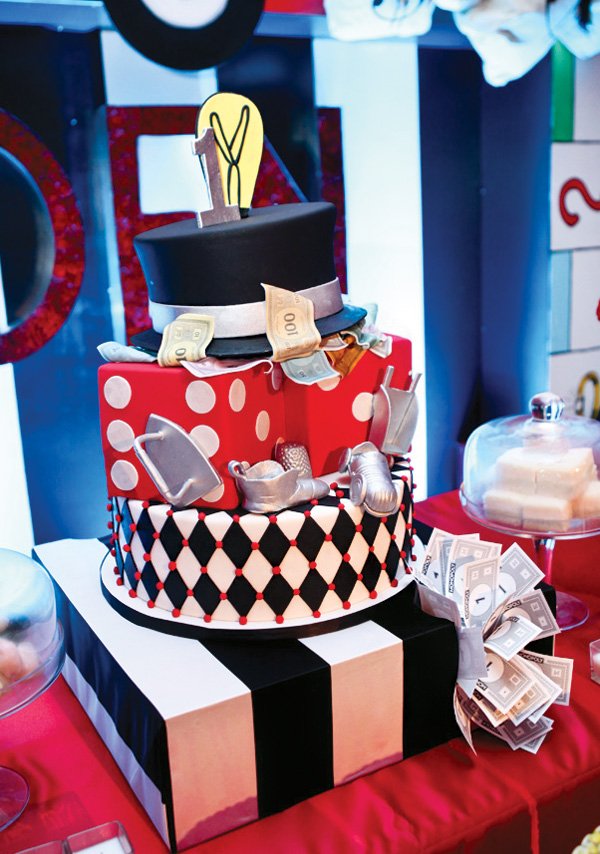 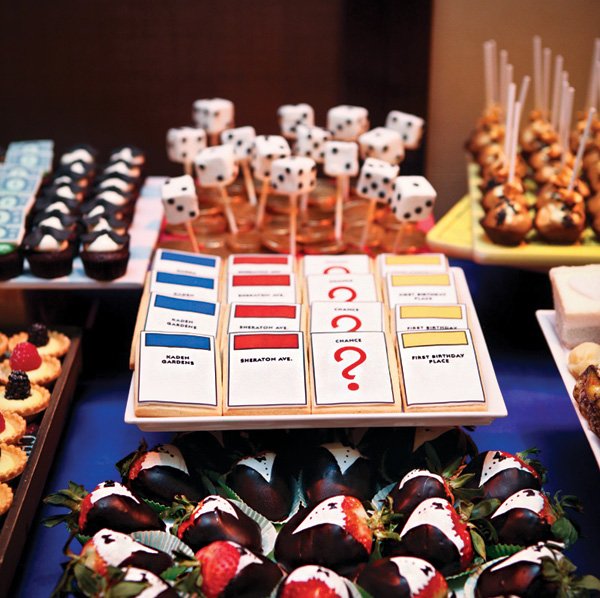 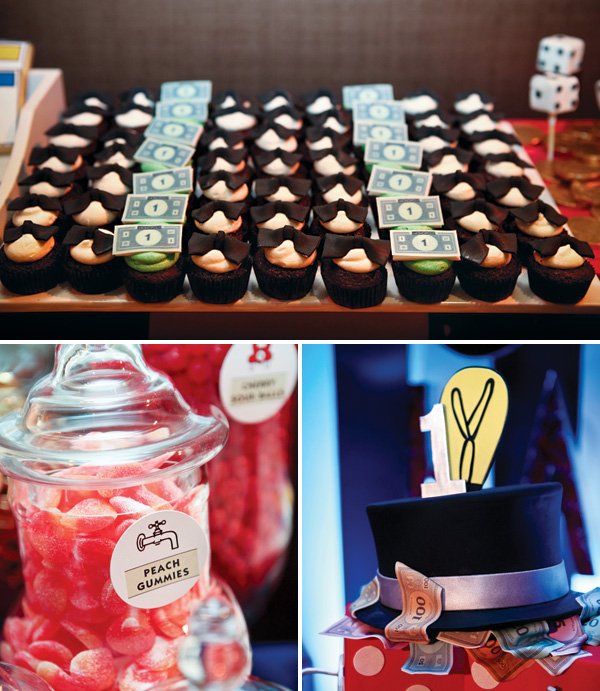 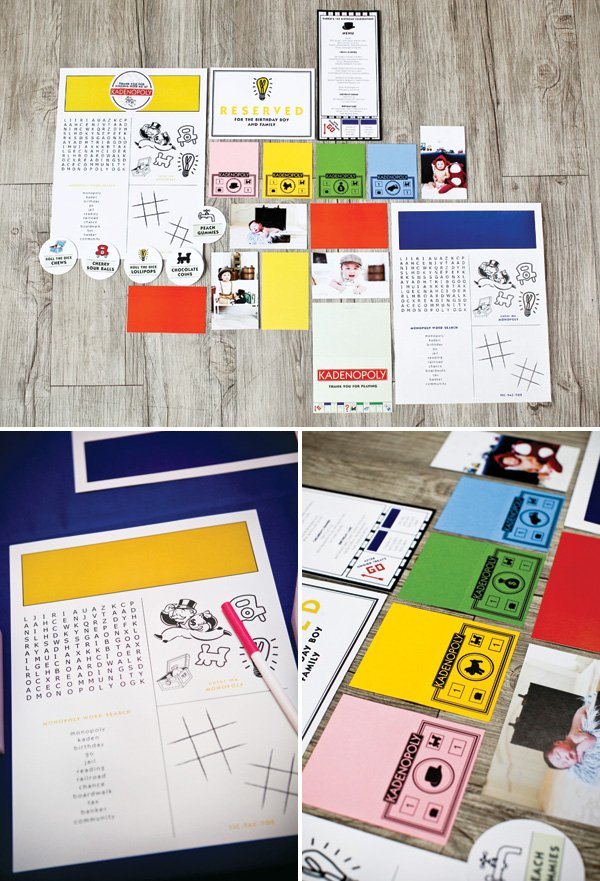 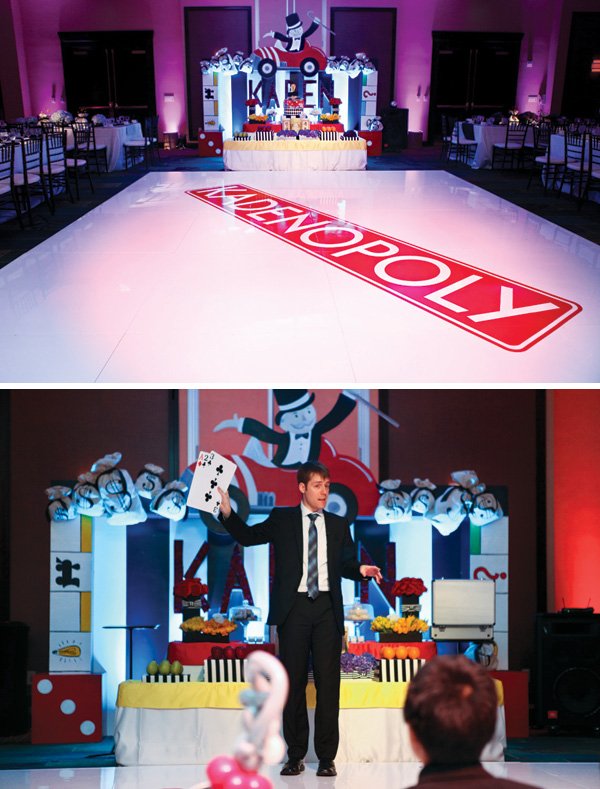 PARTY DETAILS as told by Sophia…

Kaden’s parents were one of the last of their friends to have kids, which made them think many of their guests would not be quite as excited for a baby’s first birthday party. So as added incentive, they decided to have Kaden’s party in the evening and incorporate a
DJ, karaoke, dancing, and of course an open bar to make the kiddy event just as adult-friendly! Kaden’s mom thought the idea of a Monopoly theme would be a great fusion of something formal and mature along with being youthful and entertaining, which was the exact premise they hoped for his party!

DECOR
We had way too much fun conceptualizing the look of this event, all thanks to the famed Monopoly game board! Two main looks were designated for our dining tables. A series of long banquet tables each displayed a solid colored runner to match with the colors of the board game properties. Inviting Occasion artfully arranged floral pieces along with money bag props to specifically coordinate with the runner colors. Additionally, square tables were draped in white and large black polka dotted linen to imitate the game’s dice. Top hats acted as containers for our square table centerpieces, accented with genuine monopoly money and paired with smaller bright satellite pieces.

In the center of the room, a red Kadenopoly decal was positioned on a pristine white dance floor, coordinating with the board game. Also as homage to the Monopoly man, a bow-tie folded napkin was placed at each place setting. And in accordance with Korean culture, a display table was set up front and center, showcasing a birthday cake, fresh fruits, and Korean rice cakes. The highlight of the display was an amazing custom designed and constructed backdrop!

For the foyer space, Kaden’s mom’s business was able to enlarge and print the actual Monopoly board image onto fabric, which was scaled to perfectly cover our square cocktail tables. Extra-large Community Chest and Chance cards revealed images of the birthday boy from his first year on the reverse side.

SWEETS
The sweets display was another fun explosion of themed elements. Kayla’s Kakes created edible pieces of board game art. From dice and money bag cake pops, to customized property sugar cookies, along with chocolate dipped strawberries dressed formally in tuxedos and mini cupcakes with sugar money and bow-tie accents, the display was
styled with themed props, personalized dice boxes, and more sweets and candies.

The masterfully designed cake from Filigree Cakes was a simultaneous celebration of Kaden’s birthday as well as the board game! Each tier paid tribute to components of the game, and was appropriately topped with a bright Electric Company light bulb and big #1.

STATIONERY
While incorporating traits characteristic of the board game, it was most rewarding to work with Cherish Paperie to brainstorm and design all our stationery pieces and develop an arsenal of fun stationery goods unique to Kaden’s party.

For the invitations, a red KADENOPOLY belly band wrapped around the square white invitation cover and a round seal with Kaden wearing a top hat and holding a little cane was pictured on the back side. The cover opened up to reveal the invitation’s bold solid colors and playful twist of words inspired by Monopoly elements.

For the event day different colored Monopoly money cards were used for guests to identify their table assignments and note as entrée selection indicators. Property cards and game spaces labeled our sweets and menu cards also stayed within theme. Our kiddy guests received large poster-sized property “cards” that included coloring spaces, word searches and tic-tac-toe boxes to keep them occupied through dinner. And oversized board pieces with verbiage personalized to the party were used as directional signage throughout the venue to direct guests to the event.

It wouldn’t be complete without a THANK YOU card, which was designed to look like the game’s box cover complete with a “thank you for playing” note to guests and more Kaden-specific visuals.

ENTERTAINMENT
As many of our kiddy guests were self-sufficient in managing their own activities, a separate kiddy area was set up for them to enjoy food, crafts, and goody boxes. Race car tracks were set up for children to race hot wheels and build Lego vehicles and a balloon artist led the kids in constructing their own personal balloon creations as well as
producing balloon art for each kiddy guest.

Although not identical to the game’s Rolls Royce, our birthday boy was introduced in style, driving in for his grand entrance in his posh Mercedes convertible. And for both children and adults, a professional magician provided dinner entertainment with fancy and playful tricks. Once birthday activities concluded, the kids were excused and adults took over the remainder of the evening with karaoke singing, games with prizes, and dancing!

While the game of Monopoly provided a tremendous amount of inspiration for the event, this party was all about KADENOPOLY and celebrating Kaden’s first birthday! No one went to jail in our version of the game — all passing GO and collecting from the bank!