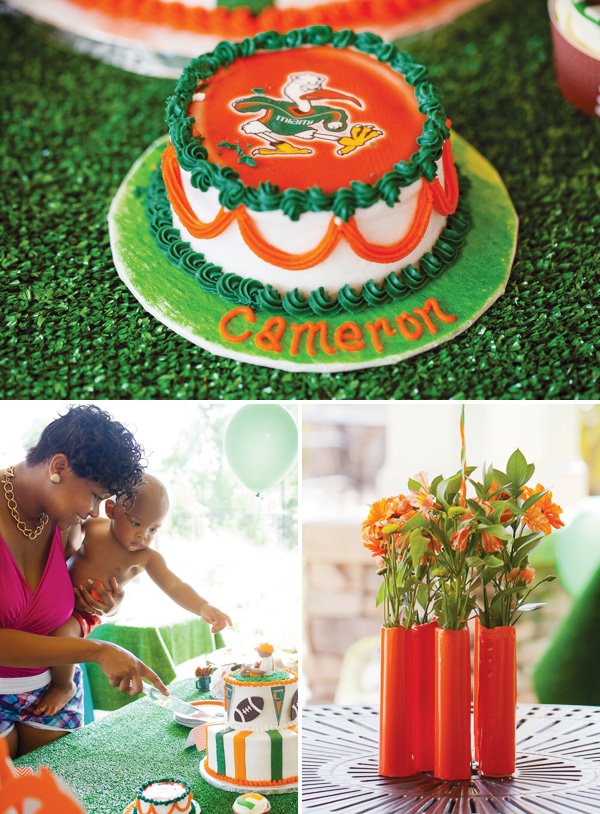 C-A-N-E-S-! Can you guess what the birthday boys’ “future” favorite team will be? The University of Miami Hurricanes! Tiffany of Orange Moon Events & Planning created this “Go Canes” UM Football Themed Birthday Party, with great ideas to kick off your little ones sports themed party, or even Superbowl Sunday… which will be here before we know it! ;) 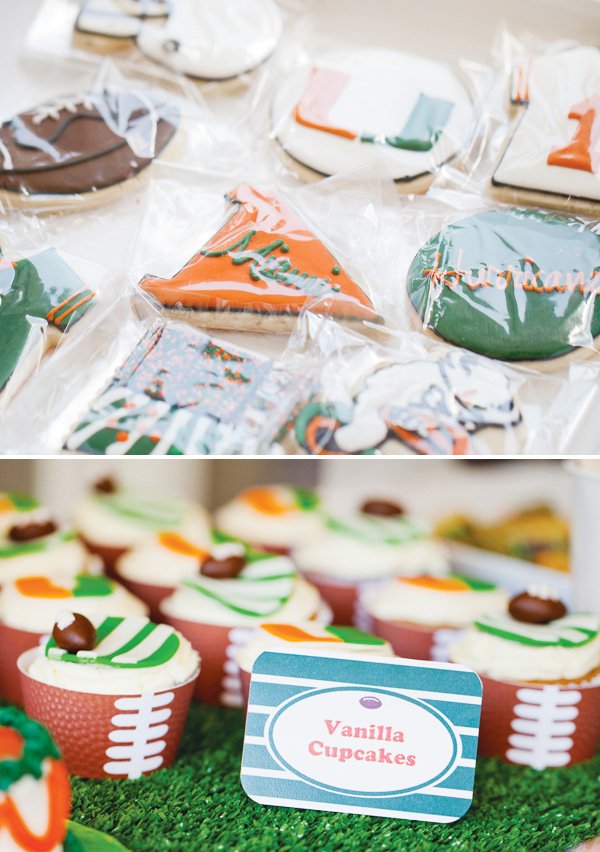 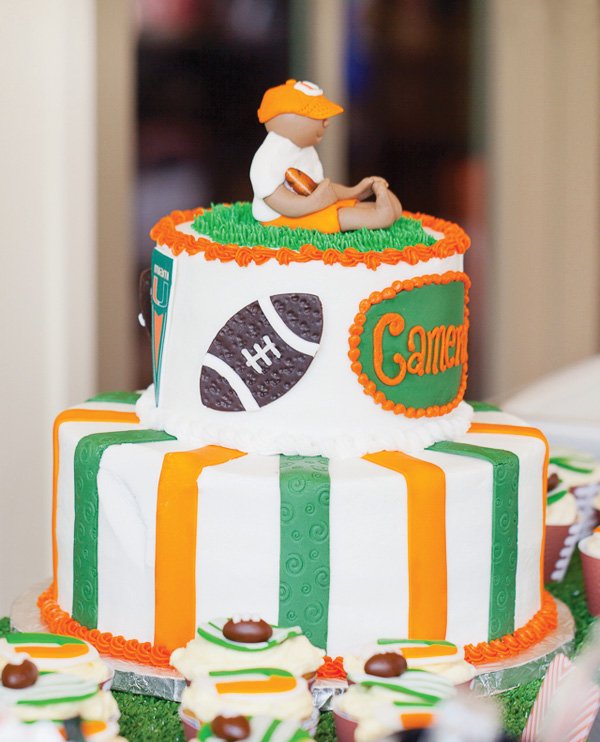 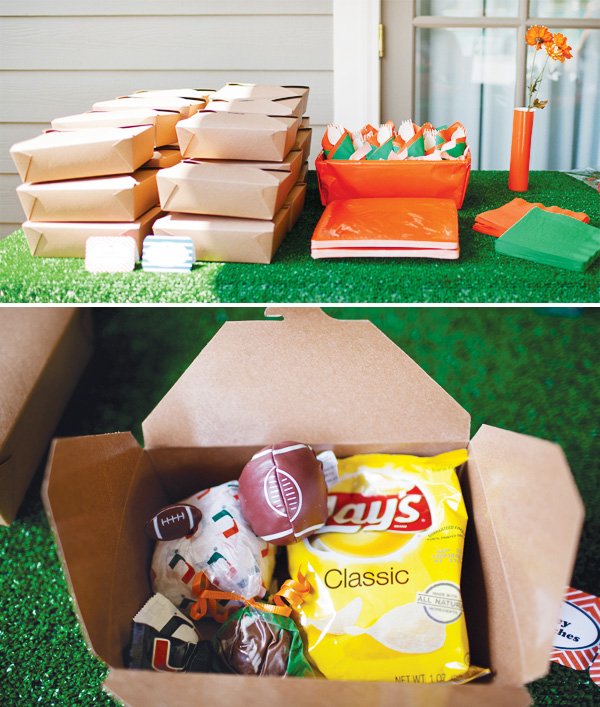 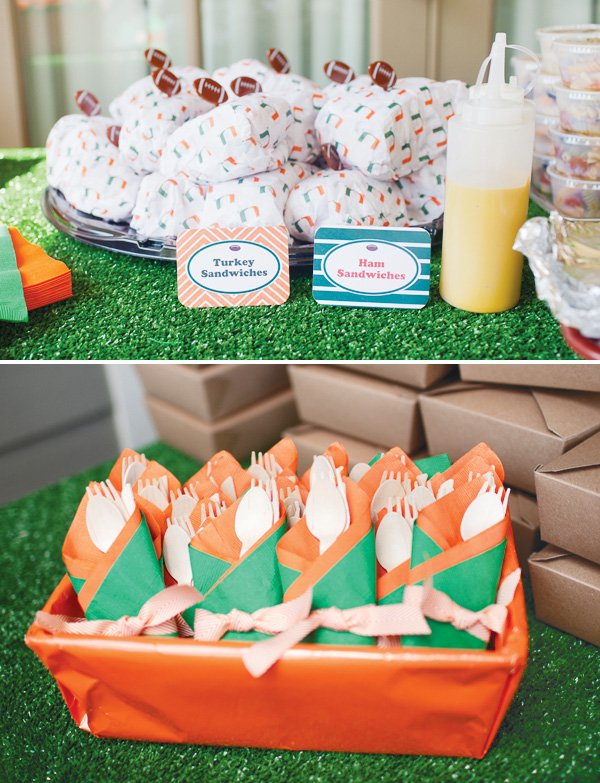 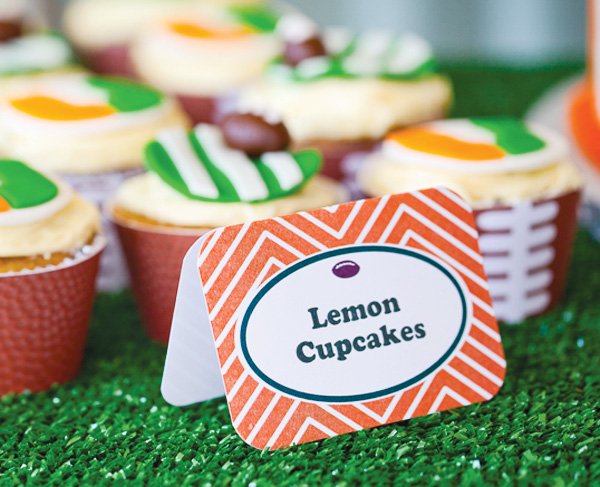 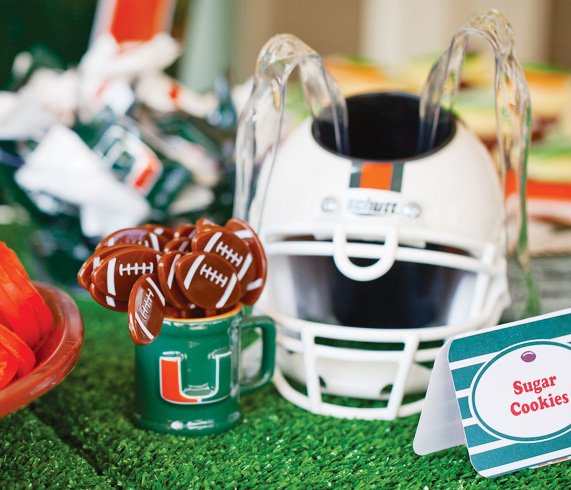 PARTY DETAILS, as told by Tiffany…
:

With football season right around the corner and summer winding down, the two were combined for a football themed pool party (the guest of honor’s “future” favorite team J). This is a focus on the food, drink, and dessert tables.

Mixed orange flowers in bud vases were at the center of each table and artificial turf was used as overlays on the food, drink, and dessert tables. University of Miami paraphernalia were used throughout such as a mini Miami Hurricanes football helmet caddy which held the serving tongs, a mini University of Miami mug which held the football shaped picks, a custom designed “Go Canes” banner which hung over the food table, and dinnerware such as cups and dessert plates.

– Kids Lunch: Since it was a pool party and kids were more preoccupied with playing in the pool than eating, the kids’ lunches were served in squat take-out boxes. Each box included either a ham or turkey and cheese sandwich wrapped in University of Miami tissue paper, a bag of chips and a chocolate covered Oreo, two University of Miami soft mints, and a mini squish football toy.

– Adult Lunch: A tray of ham and turkey sandwiches with the fixings on the side, a bag of chips, and a small cup of pasta salad.

– Drinks: Mini bottled water with custom bottle labels in the school colors and the guest of honor’s name on each label. Also, no football field is complete without the iconic Gatorade cooler full of Gatorade which was also served.

Guests filled gable boxes in the green, white, and orange school colors with various treats from the dessert table. Treats included cupcakes, cookies, and chocolate covered treats. Lemon and vanilla cupcakes were topped with football field and the “U” logo cupcake toppers, and wrapped in football themed cupcake wrappers. Chocolate covered pretzel sticks and chocolate covered Oreo cookies were drizzled with orange and green colored white chocolate. Miami Hurricanes themed sugar cookies included different shapes such as a football, helmet, jersey, stadium, pennant flags and circles with the school name and logo, and the team’s mascot, Sebastian the Ibis. The 2-tier cake matched the theme and school colors and was topped with a fondant version of the guest of honor with his “U” hat and holding a football.