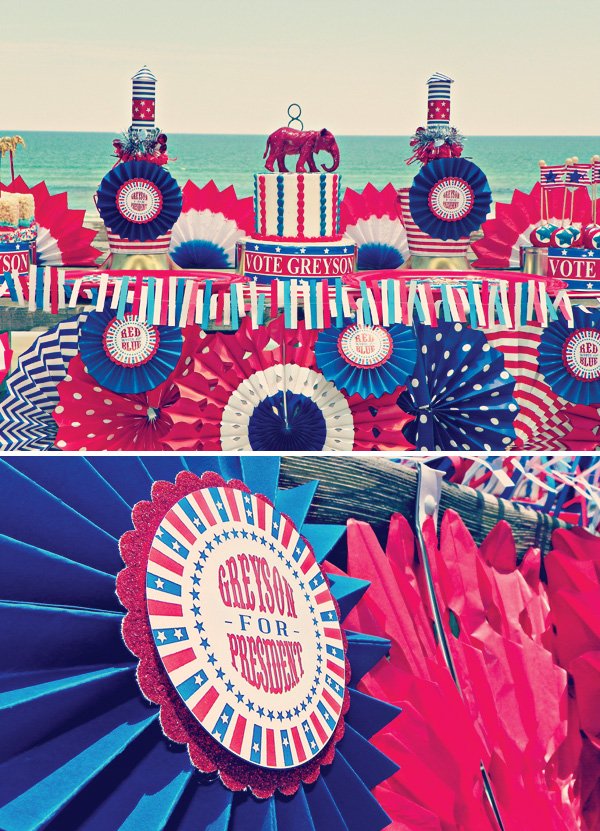 Every year, Natalie of Southern Belle’s Charm encourages her son to pick his birthday party theme + three party wishes (Read all about her cute birthday idea in her details!). For his 8th birthday, Greyson chose a presidential theme and requested it to be thrown on the beach with his family in attendance. Being the most amazing mom ever, Natalie was up for the challenge of a “destination birthday party” and worked her magic & planned this amazing “Greyson for President” Patriotic Birthday Party! They day was perfect & Greyson lived his dream of being president for the day! :) 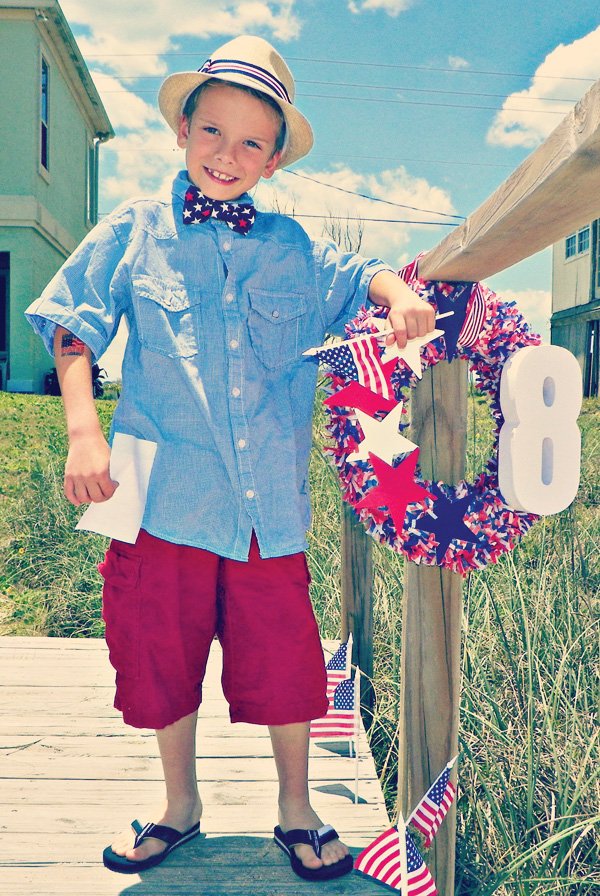 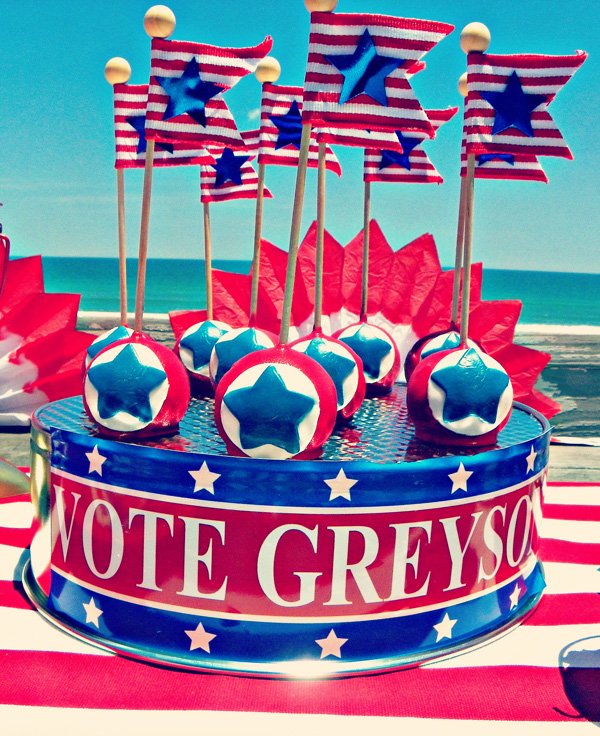 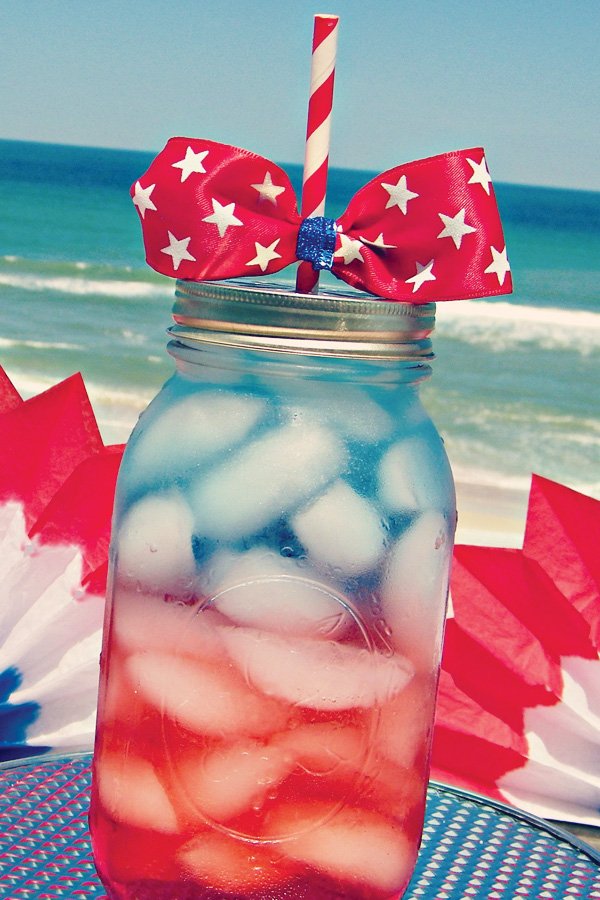 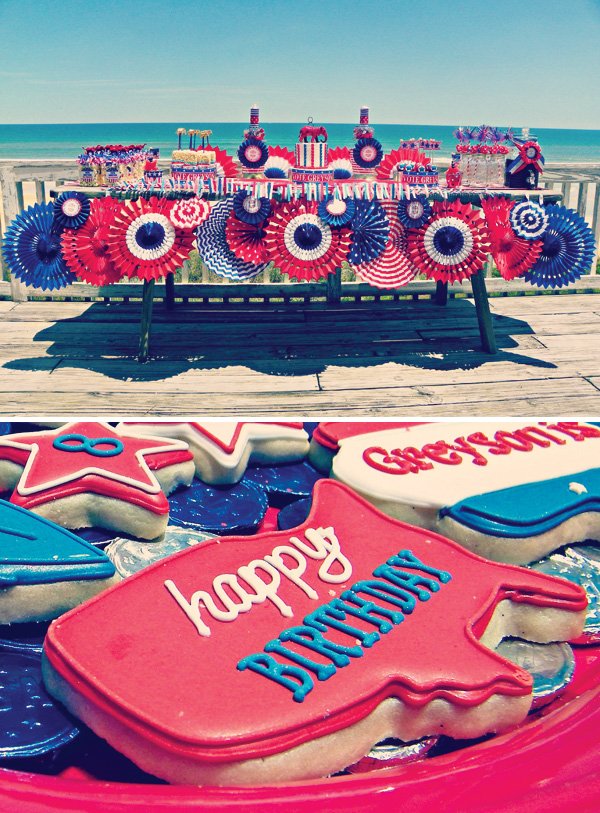 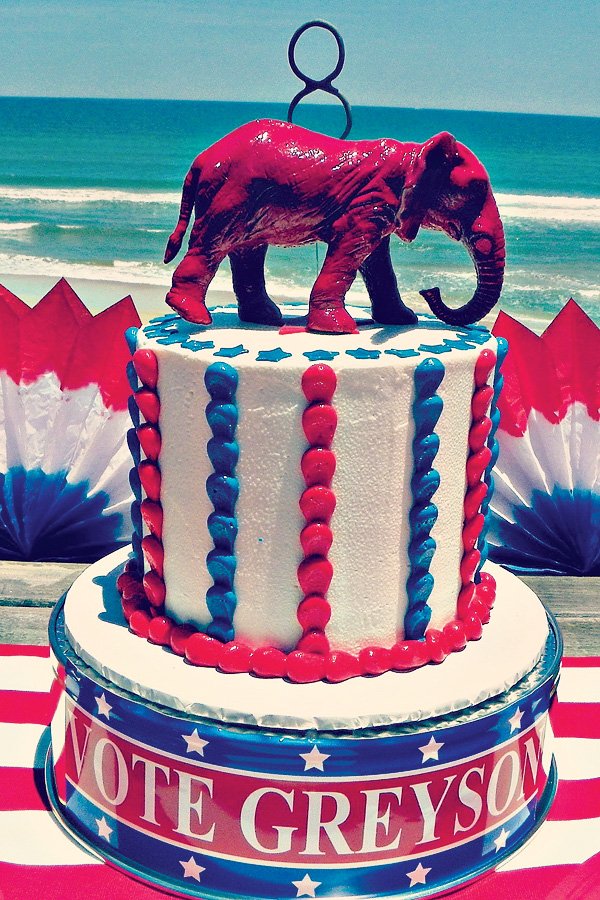 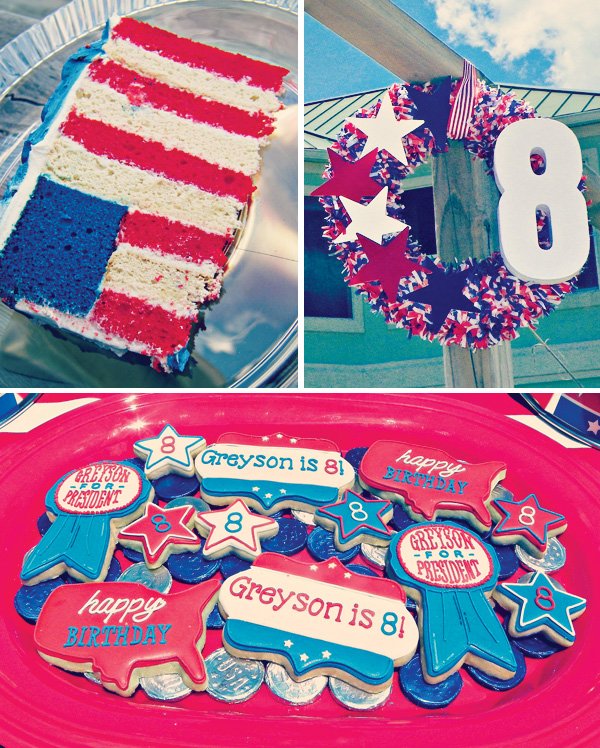 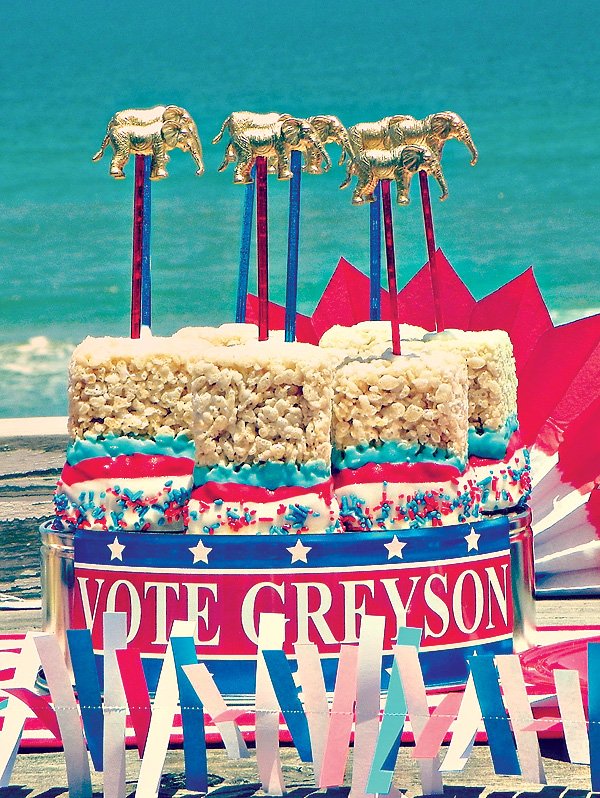 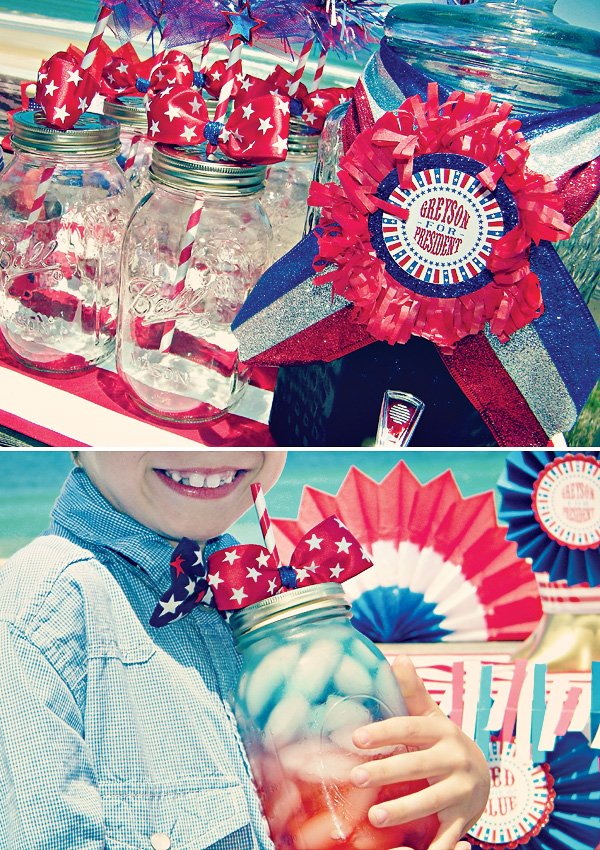 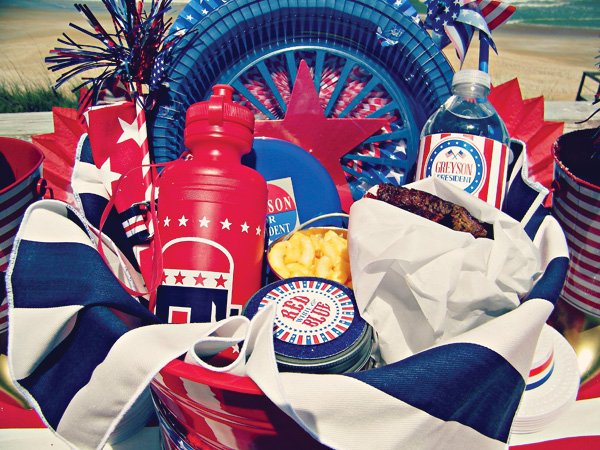 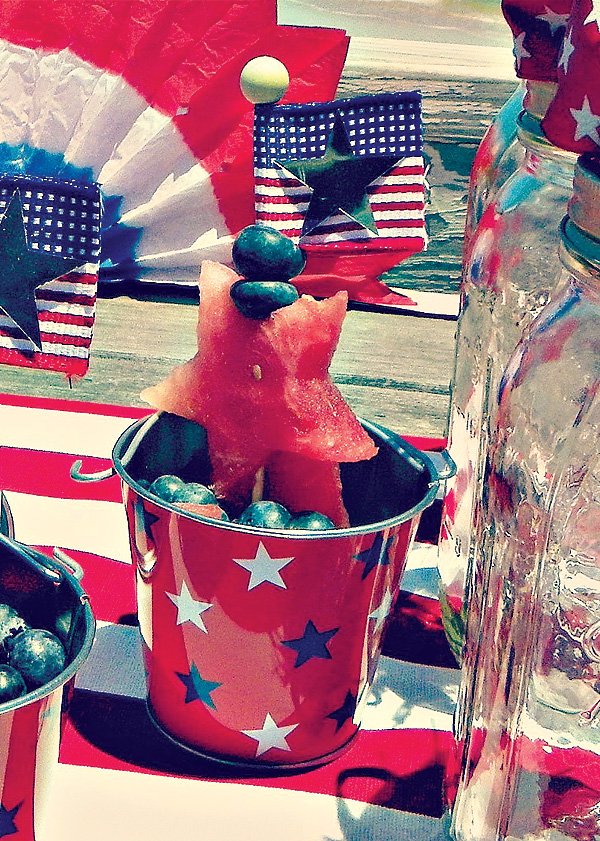 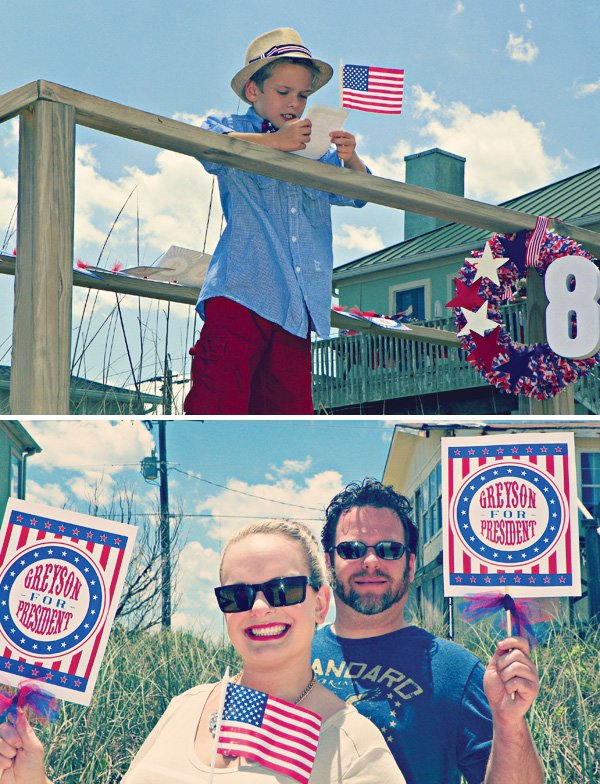 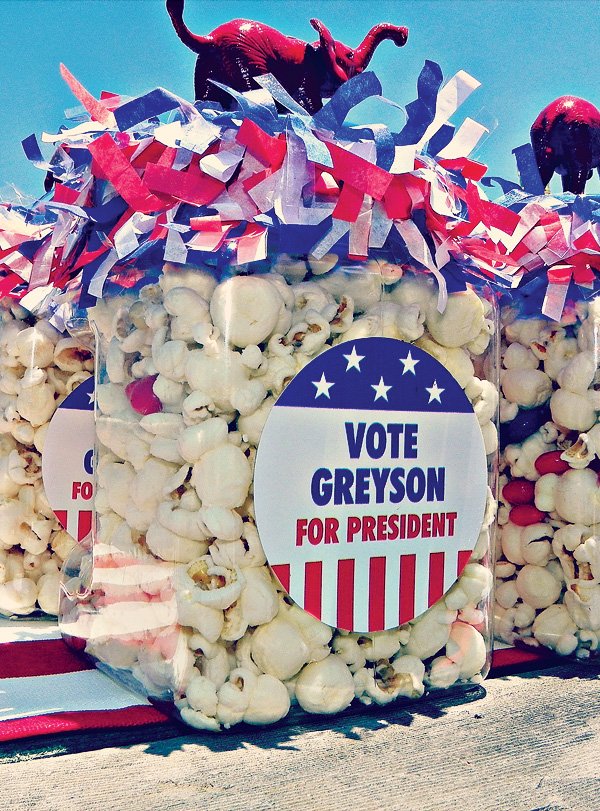 PARTY DETAILS, as told by Natalie…

Greyson really wanted his grandparents, aunt and uncles to be at his party so he asked me if I could host the party while we were vacationing in May. Who could say no to that gorgeous face…so I committed to planning a destination birthday party at a Beach House in Florida. Then I got to thinking and realized this would be a great opportunity to take you along for the ride. Explain how I go about designing a theme, cultivating an atmosphere and virtually designing a party. I do this for clients all the time – so why couldn’t I do this for myself? With any party, there are lots of props and serving pieces that are used. I was able to ship some items and repurpose others. It was definitely a learning experience that I will do again!
I am a firm believer that children should choose their own party themes. The imagination and creativity of a child’s mind far exceeds our own and I love to use them to help create the parties. So this year, I asked what he wanted the theme of his party to be and you have to know I always hold my breathe as I ask. When I say that he has a very creative imagination – I am not exaggerating. Drumroll please… Greyson has chosen the theme {Greyson for President}. Yep, you read that right – he wants a party all about campaigning and winning a Presidential election. Let me give you a little back story on why this theme was perfect for him. My sixth cousin was Abraham Lincoln and as a family we have always been very proud of that fact. He was such an inspirational man and influential President. Greyson has been fascinated with that fact since he was about four years old. Most little boys dream of being a firefighter or race car driver – my son has wanted to be President of the United States since he was very young. He is infatuated with history and the Presidency. He even has a copy of the Declaration of Independence in his room! His teachers boast that he will be President someday – they laugh that he campaigns at school and truly loves getting to know everyone.  So it was fitting that he would ask for this theme one day.

Every year, I allow Greyson to choose three wishes that he would like at the party. It has to be within reason, but I love allowing him to take part in his special day. Sometimes, the three wishes help me to create a theme if he is struggling and sometimes they are incorporated into his party. This year, I was excited to see what he would say:

Well needless to say, I was ecstatic with his wishes. The ocean as a backdrop to the party was just what I wanted to hear. Lunch was served as a Southern Picnic in Baskets with blankets on the beach. And yes, there was a vote and he gave a fitting acceptance speech.

I wanted to keep with the tradition red, white and blue but added hints of silver and gold metallic. With the bright blue ocean in the background, the colors sparkled on the table.  When we arrived at the beach house, I hunted around for a table that would display the sweets table. I found a worn wooden picnic table that was perfect! I added a red and white stripped runner along the table with rockets in sand buckets as centerpieces. I wanted height for the displays so I found springform cake pans at the local store for very cheap and used them to display the bumper stickers I had made. I used paper fans and pinwheels to add the punch I needed along the front of the table. Then used a paper banner to finish off the look.  There were mason jars with sparklers in the paper straws, mason jar dispensers for sweet tea with a ribbon wrapped around the front, flags, bowties, and lots of strips.

In honor of my southern background, I wanted to lunch to be served on the beach. Each guest was given a bucket lined with a striped cloth that included their clear plate with star, napkin wrapped silverware with a ribbon belt to match the birthday boy’s hat, a mini mason jar filled with baked beans, a tin filled with macaroni and cheese, Texas brisket wrapped in parchment paper and closed with a “Vote for Me” sticker, and a water bottle. I included the beach activities in the bucket as well: Vote for Greyson Frisbees, Bingo Game Cards with bubblegum USA coins as markers, flag beach balls, pinwheels and water toys. Sweet tea was served as well as a layered Red and Blue drink for the kids.

With the ocean as a backdrop, the guests were able to spend the day playing Frisbee, beach blanket bingo and play in the water. It was an all day affair and everyone left a littler tanner than they came. Before the party was over, Greyson made his acceptance speech. A crowd formed cheering him on with signs and flags. Several groups playing on the beach, stopped to congratulate him. It made his day!

With the party being on the opposite side of the country and limited supplies, I had to make all of the DIY projects in advance. All of the paper products, banners, flags, signage, and decorations were made by me and shipped to Florida. I was able to squeeze in just enough time for a 10 minute wreath. I used foam tubing I found at the home improvement store and turned it into a wreath shape. Then using duct tape secured it in place. I wrapped the wreath with tissue fringe and then added the stars. With thrifting, I found the #8 cardboard number and added it to the corner, tied a bit of ribbon to the top and it was ready to go. The wreath was packaged in my luggage and was perfect to add to the landing for the acceptance speech.