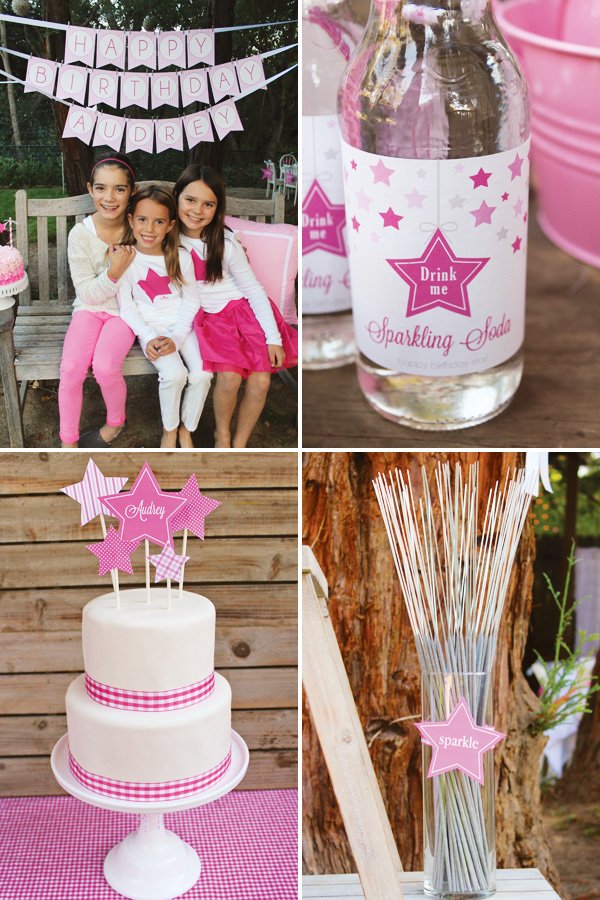 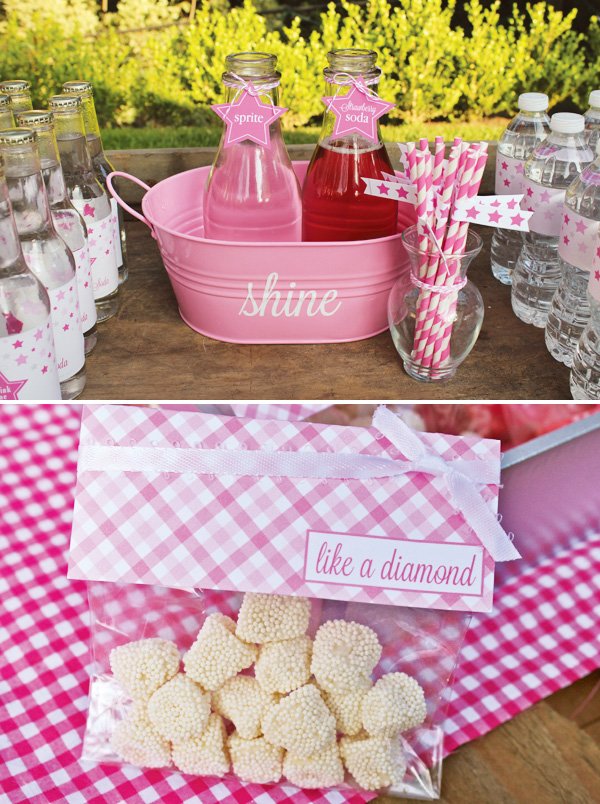 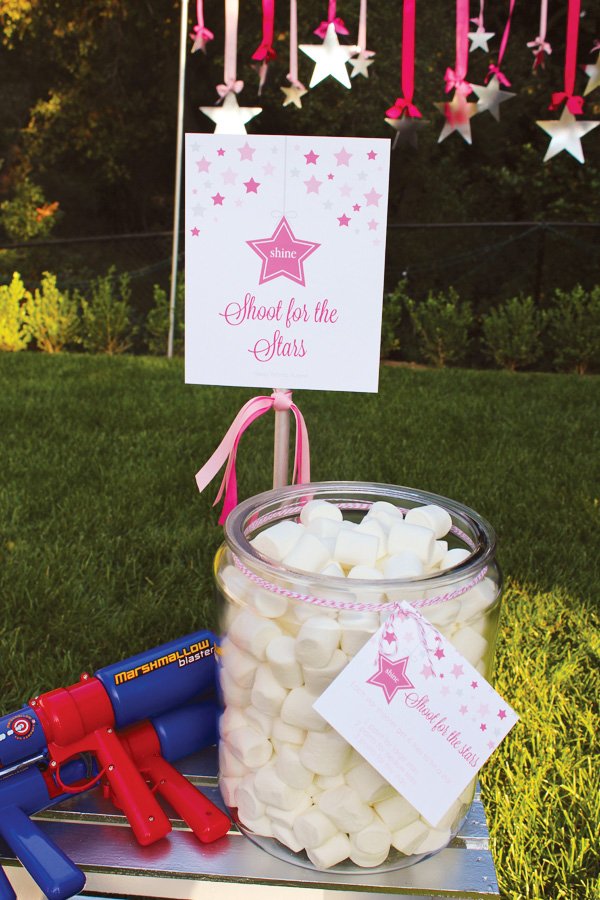 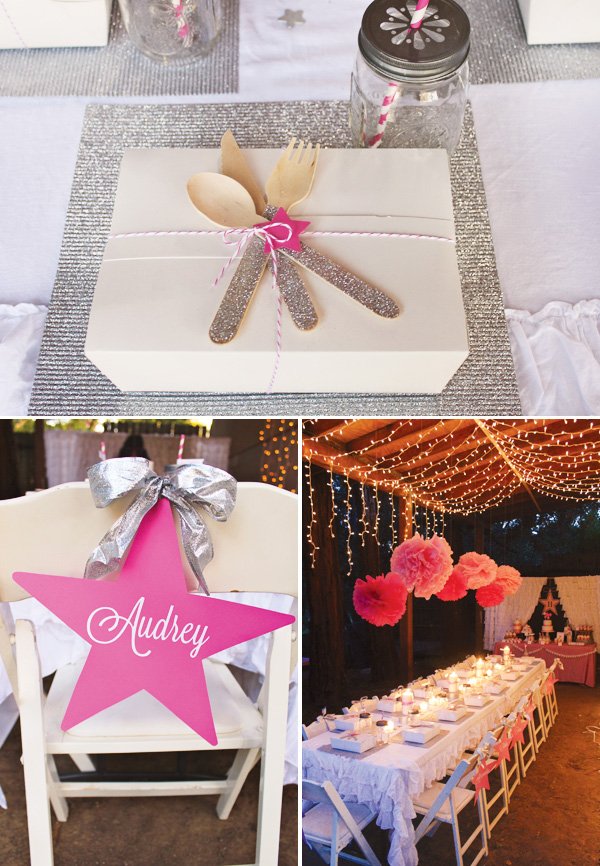 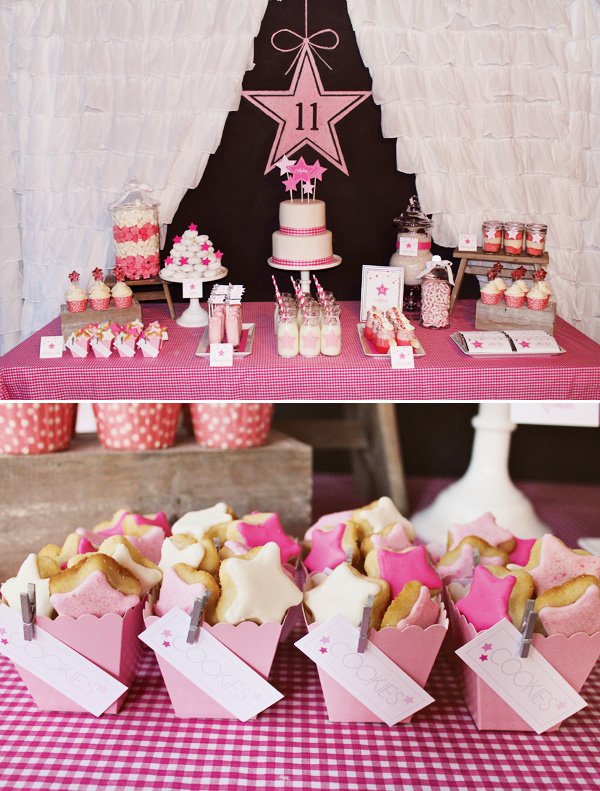 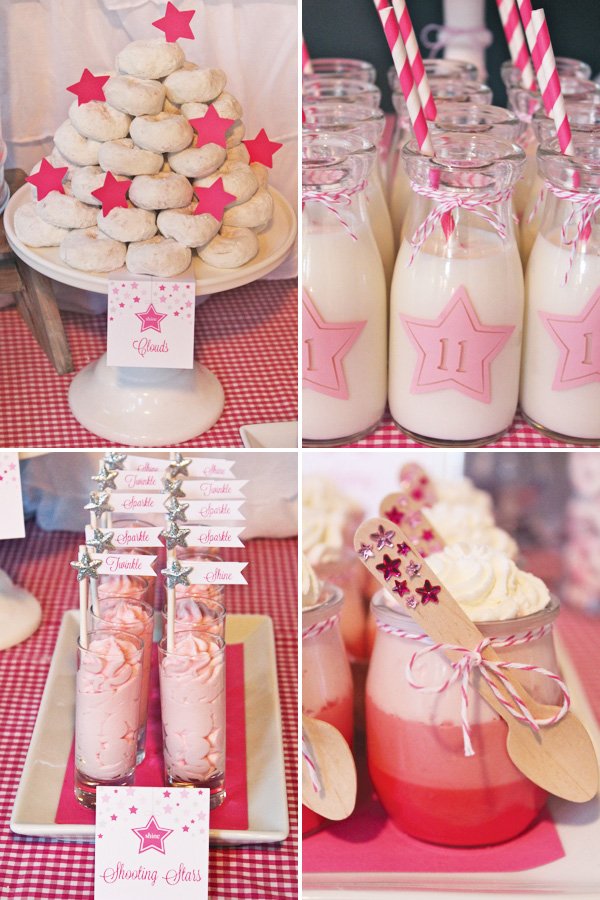 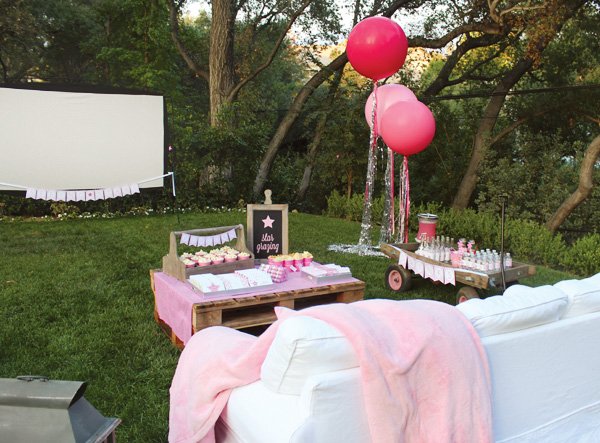 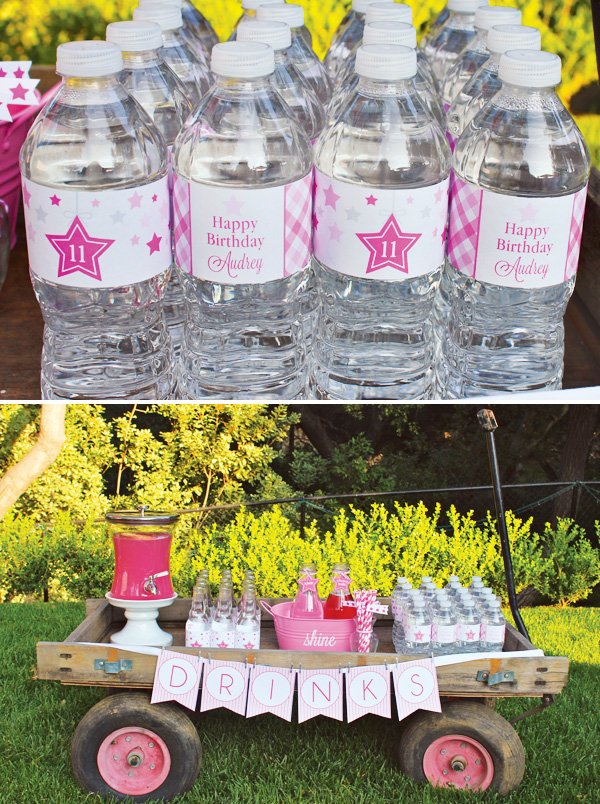 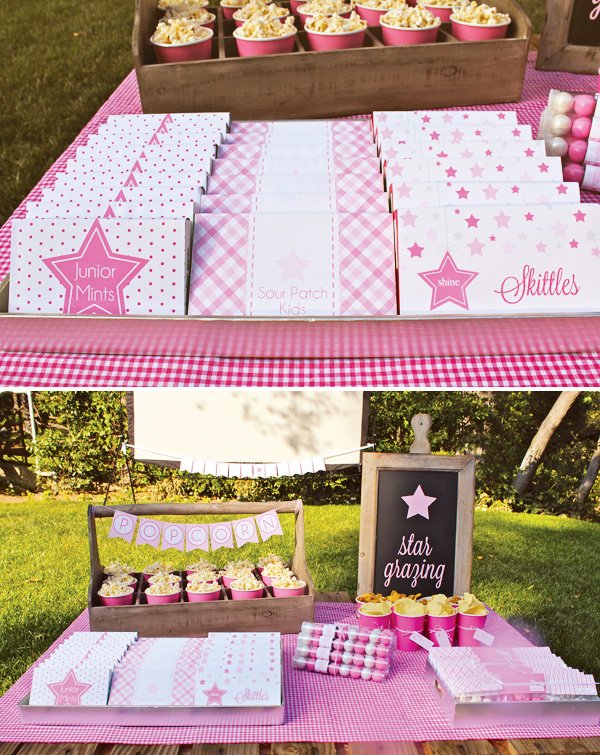 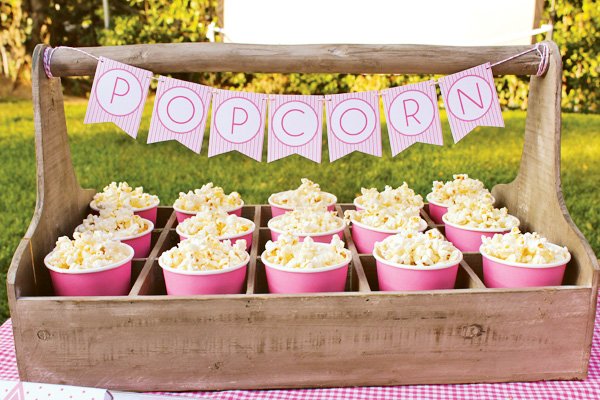 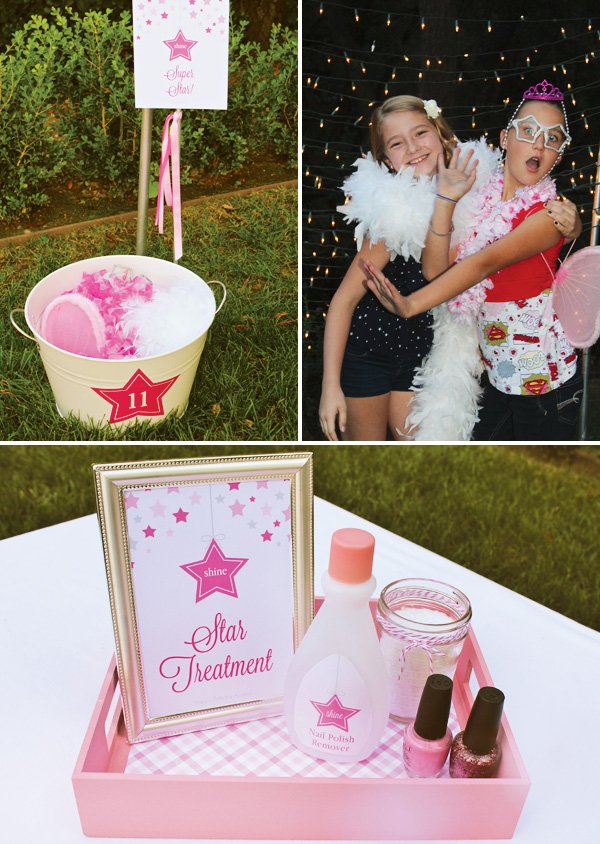 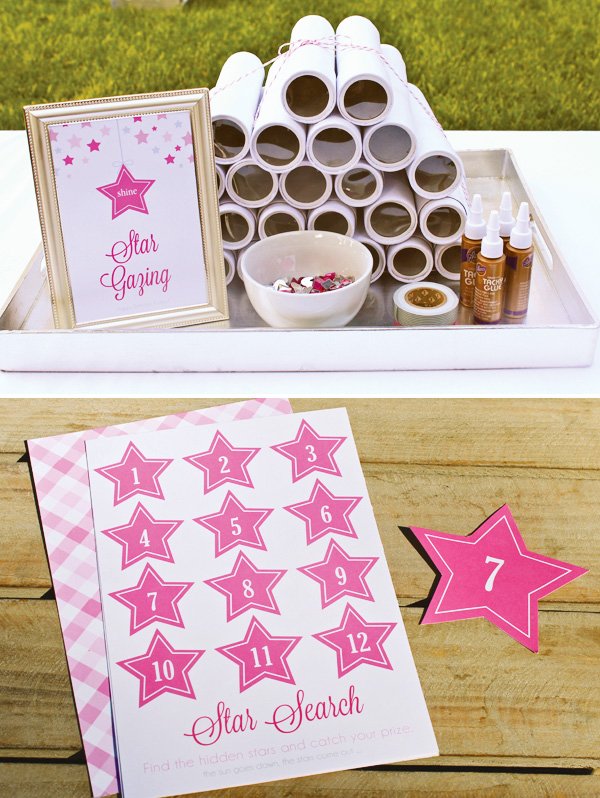 PARTY DETAILS, as told by Jenny…
:

I styled this party for my daughter, Audrey’s 11th birthday. She brings so much sparkle to our lives and her personality really shines so a star party was just the perfect theme. Since she is getting older, I wanted to keep the party as girly and sweet as possible while she will still let me. We used several shades of pink, silver and a lot of sparkle in all of the printables and decorations. Everything at the party dealt with stars!

We set the dinner table under an over hang in the back of our yard. I draped over a dozen strands of twinkle lights over the table and down the wall to create a beautiful, star like mood. Once the sun set, the area truly sparkled. The table was covered with ruffled tablecloth and I used glittered scrapbook paper for the placemats. Each place setting had a takeout box with dinner inside. I glittered wooden utensils and attached them to the box. For the backs of the chairs, I cut out pink stars and used my Cameo Silhouette machine to cut out the girls’ names. I made pedestals out of wooden star cutouts and round boxes for the candles. Pink pompoms in two shades of pink hung over the table.

The backdrop of the dessert table was a plywood board that I painted with chalkboard paint. I then traced a star that matched the invitation and filled it in with pink colored chalk. Ruffled curtains framed the backdrop. The centerpiece of the table was a two tiered chocolate cake decorated with gingham ribbon and star toppers that matched the other printables. The dessert table consisted of a Milky Way, which was milk bottles decorated with stars that I also cut from my Cameo machine. There were shooting stars, stars in jars with wooden spoons decorated with star jewels, “star”berry cakes in mason jars, clouds (donuts), cupcakes with star suckers, star bars, star marshmallows, star dust and cups of star cookies.

The girls did many activities including:

– Shoot for the stars: Using marshmallow guns, the girls shot at stars hanging on a frame I made out of PVC. Each girl got 6 marshmallows and received points for hitting different sized stars.

– Star treatment: the girls did their nails in pink polish of course.

Once the sun went down, the girls watched a movie on a big screen set up in the yard. We moved our couch outside and I sewed a bunch of pillows in pink fabrics for the girls to lie on. I made the “star grazing” table for the movie area out of old palates. The candy boxes were wrapped to match the party printables. We had mini cellophane bags of Star Bursts, like a diamond, and little star candies. The girls also snacked on popcorn and chips and took home tubes of pink colored gumballs.

The drinks were set up on an old wagon that we had. Luckily, it had pink wheel rims. The girls picked from “star”berry soda, sparkling soda, lemonade and personalized water bottles.

I always make a mini “smash cake” for my kids- a tradition from their first birthday. For this party, I did a mini pink ombre cake with star bunting. The girls all had big sparklers that held while we sang.

I made star t-shirts with the word shine on them for each of the girls again using my Cameo. A framed signed told that girls that Audrey thanked her lucky stars for having them as friends.

Audrey had such a fun birthday- it was beautiful, girlie and a little bit of glam- just like her. All of the printable were done with patterns and shades of pink. Invitations, food labels, water bottle wraps, candy box covers, and more can be found here.