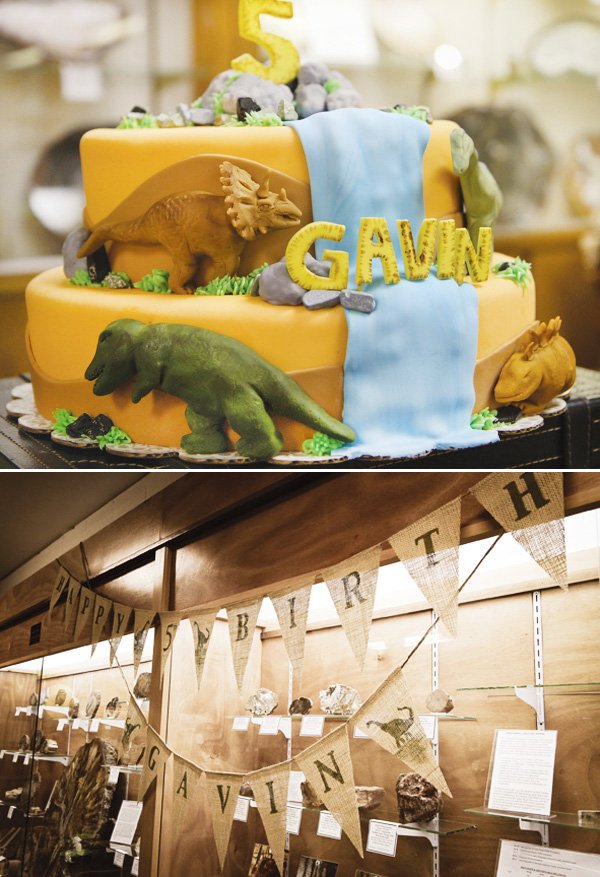 Are you ready for a ridiculously creative adventure? Well, check out this super fun AND educational Indiana Jones Lost Dinosaur Egg Adventure that Chrystal brought to life for her son Gavin’s 5th birthday! Every detail of this dinosaur party was planned to perfection… it was even held in the petrified wood room at the local museum! 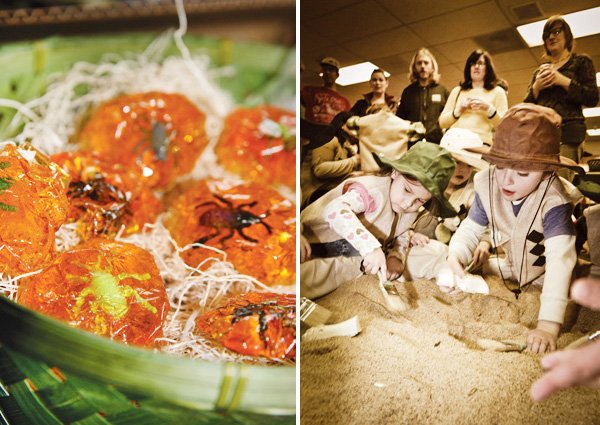 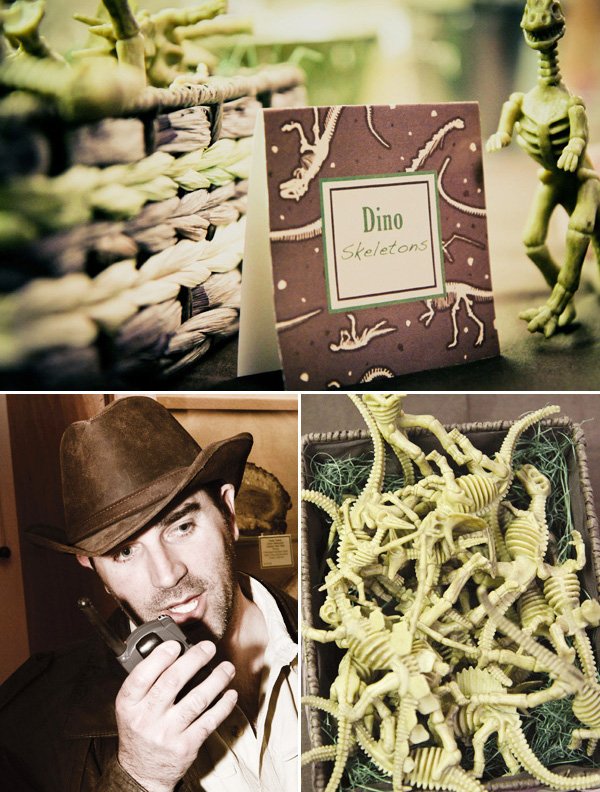 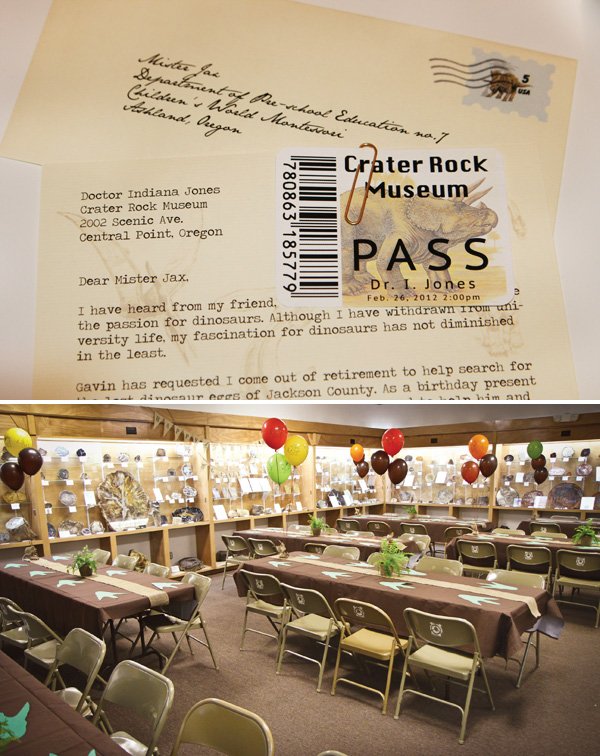 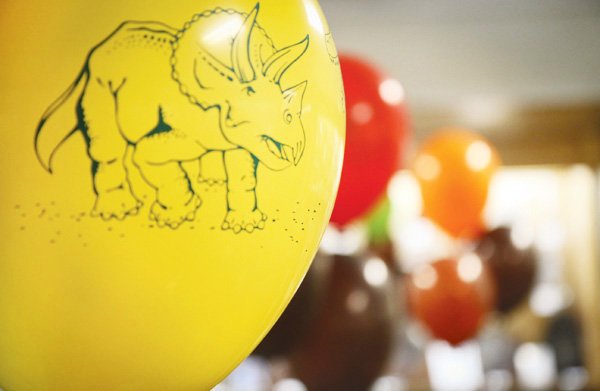 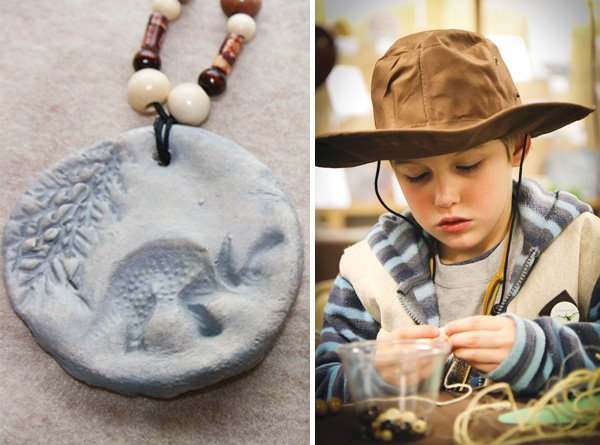 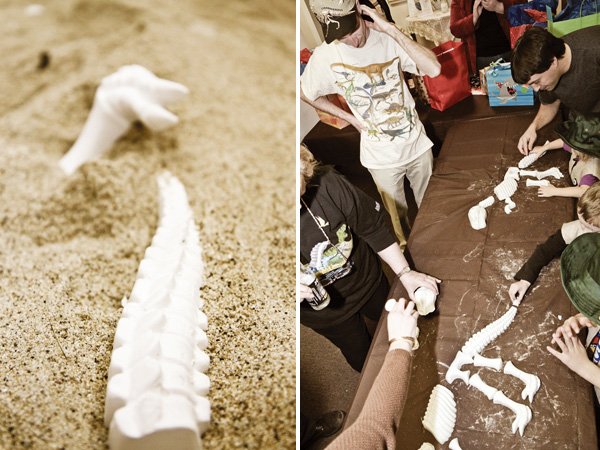 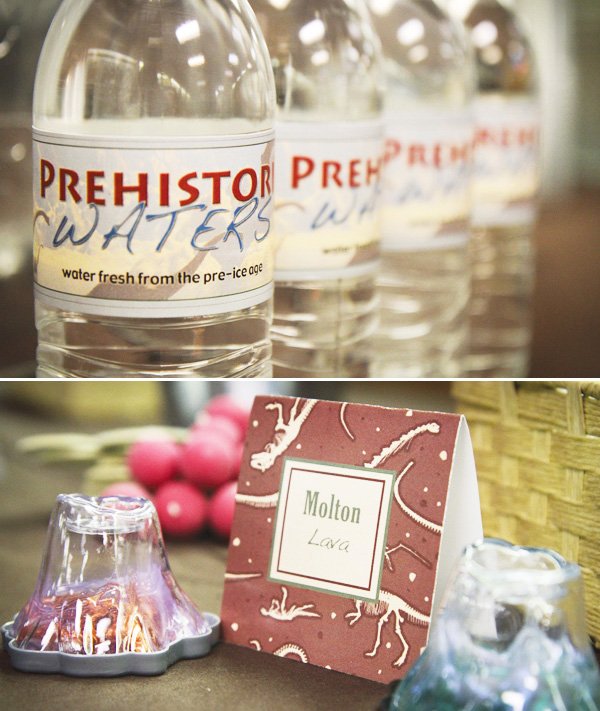 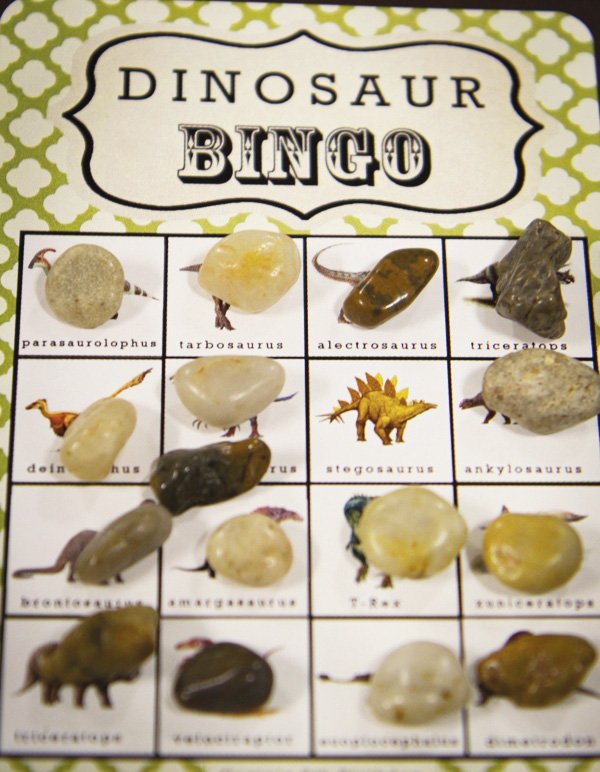 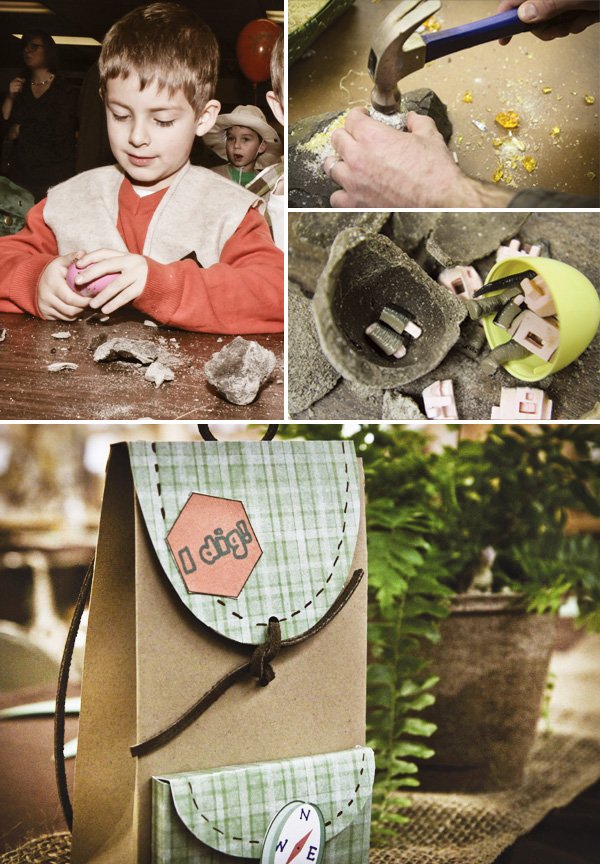 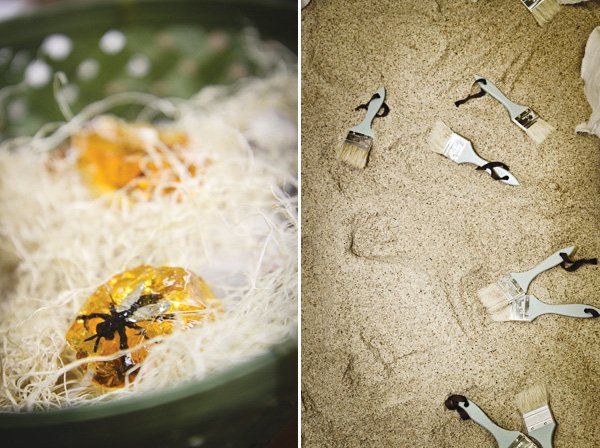 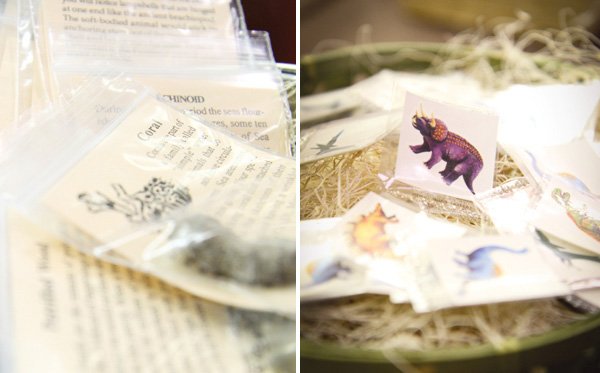 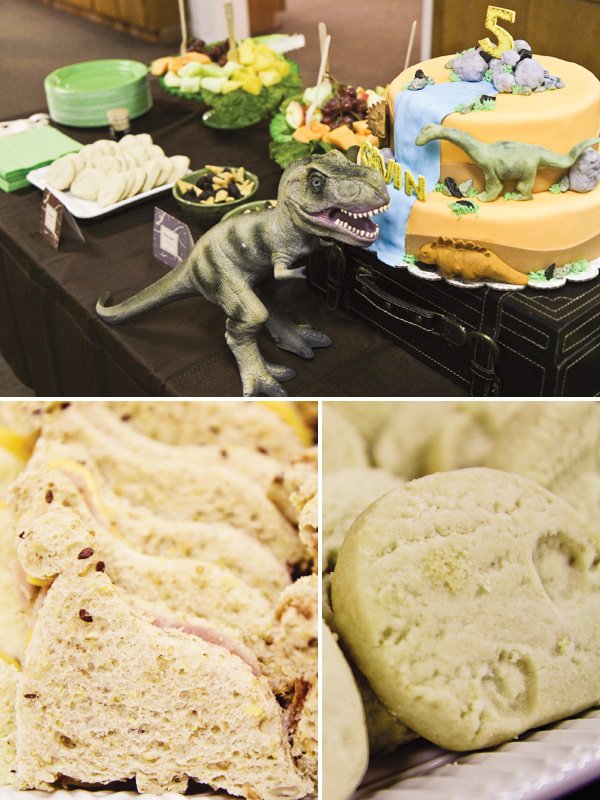 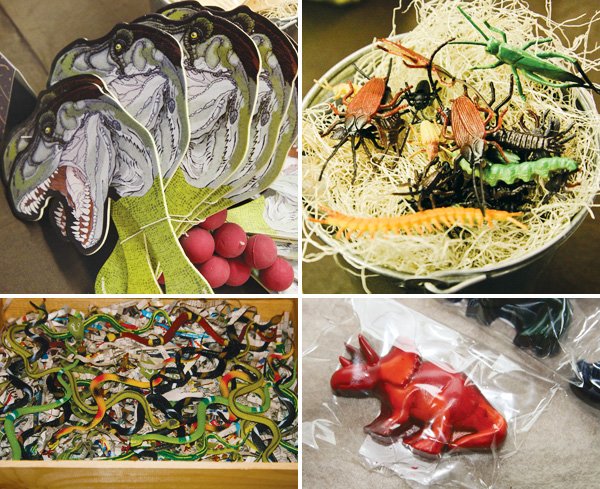 PARTY DETAILS, as told by Chrystal…

The invitation was a letter from Doctor Indiana Jones himself, inviting the kids to help him search for the long lost Dinosaur Eggs of Jackson County. Also included with the letter was a ticket to the museum attached with a large gold paperclip. The letter was then sealed in an envelope complete with a canceled dinosaur stamp.


We rented out the petrified wood room out at our local rock and geological museum. The natural backdrop of the room was incredible- full of all kinds of interesting artifacts from our earth which intrigued all the kids. We hung a rustic burlap banner that was seen immediately upon entering the room.

The tables were lined in dark brown paper table cloths with a burlap runner. In addition we had T-Rex footprints running down the tables. Dinosaur balloons and ferns accented the tables. The room was definitely fit for any budding paleontologist/adventurer.

No party is complete without food! We had dinosaur shaped sandwiches in both Peanut Butter & Jelly and Ham & Cheese. There wasn’t a single one left at the end of the party! We also had plates of fresh fruits and vegetables, fossil cookies that were a basic shortbread cookie that either had dinosaur prints in them or foot prints running across them. An unexpected party favorite that everyone raved about were the Dinosaur Claws. There were simply Bugles with the tops dipped in chocolate.


As children began to arrive, we had a station set up for smashing Amber and Crystal Geodes. I created faux Amber and encased plastic bugs within each one. The final product was brilliant and looked like the real deal. Plus it smashed into pieces perfectly. Kids were thrilled to pry the bug out. The items were smashed by the kids by using either another rock or hammer. This activity was closely supervised and no little fingers were harmed in the process. Kids got to keep their bug and some fragments from the Crystal Geode they smashed.


Once everyone had arrived the official party could begin. All children were instructed to take a seat. Then, none other than Doctor Indiana Jones came up to address the children. My poor husband had to memorize a long script for the entire party. However, getting to dress up as Indiana Jones seemed to make up for that! It made for quite the production.

Here is a snippet of some of his introductory lines:

“Hello everyone! As you know I have long been retired. I just got so tired of all of the dirt, snakes and most of all the DANGER! However, as a favor to my young friend Gavin, I have come out of retirement to hunt for the long lost Dinosaur Eggs of Jackson County… Before we can even begin to find these eggs though, I need to make sure all you kids are proper archaeologists. I wouldn’t feel right sending you off on this mission without the proper tools and education. I have for each of you an official archaeologist vest. As you can see there are 3 blank brown diamonds. Before you will be an official archaeologist, you must earn 3 pins for your vest, buy completing my 3 tasks. Along with the pins you will also earn a special tool you will need for the expedition.”

He then instructed the kids to line up. He shook each of their hands and asked them their names. He then handed them each their official archaeologist vest that I had sewn. Much to my surprise the kids were not shy at all and were extremely eager to meet him.


After they had their vests on and were seated at the tables, Indiana Jones announced they would play Dinosaur Bingo to learn all the names of important dinosaurs. I created Bingo Cards with various Dinosaurs on them. Each child was handed a tied up burlap back full of small rocks to use as markers. The game was set-up so there were only four different cards. That way, groups would all win at certain times. Once a child had their card full they came up to Indiana and got their first pin on their vest and also an explorer hat!


The next task was to create a fossil necklace which is best explained by Doctor Jones himself:

“All of you kids did a great job! I feel confident that you guys will now be able to identify some of the dinosaur relics we may happen to come across in our hunt. Now, it is time for me to teach you all about Fossils. Does anyone already know what a fossil is? Well fossils are the preserved remains or traces of animals, plants, and other organisms from the remote past… even dinosaurs! Here I have many fossils that I found in my younger years during an expedition in the Go-bee Desert. I would like to gift these to you. I feel they are very lucky and I hope they will bring you luck as well. Please take them and decorate them with these beads as you see fit. Then wear this. We will need all of the luck we can get on this expedition.”

Kids then presented their finished necklace to Dr. Jones, and earned their 2nd pin and a Fossil Brush.


The 3rd and final task was to go on an actual dig. We set-up a sand box with 2 sets of cast plaster T-Rex dinosaur bones hidden within it. Kids were instructed to use their brush and each find a bone and bring it to a table and work with their teammates to form a dinosaur. They then had to tell Dr. Jones what type of Dinosaur it was. After both dinosaurs were together all kids got their 3rd pin and a travel back-pack for their adventure. They now had officially passed Dr. Jones educational course.


It was then time for Cake. The pictures of the cake basically speak for themselves. It was gorgeous with amazingly carved realistic dinosaurs. One fun thing I found were candles that have a flame that actually matches the color of the candle. The flames were surprisingly vibrant and really fun.


After cake was done, Indiana Jones got the following call on his walkie talkie for all to hear:

Scientist: Dr. Jones, Dr. Jones – Are you there?

Scientist: I have been informed that the dinosaur eggs are located at the Crater Rock Museum?

Indiana: Really? What an odd coincidence. That is exactly where we are at. My new team has just earned all their pins. These little kids have impressed me. They should make an excellent team for this expedition. Tell what you know about the dinosaur eggs.

Scientist: I heard smugglers hid them in a shipment that arrived to the Crater Rock museum. The smugglers worked for the museum and went missing shortly after, and have never been seen since. I believe the eggs may still be there. Yesterday our team recovered a clue when inspecting some old files from this case.

Indiana: It’s not a map is it? We do not follow maps to buried treasure and X never, ever marks the spot.

Scientist: No, it is just a clue on a small note card that reads. “This water doesn’t come from a mountain instead it comes from a…?”

Indiana: “This water doesn’t come from a mountain instead it comes from a…? That’s it? That’s all you have? What’s the rest?

Scientist: I don’t know Indiana. It doesn’t say anything else? Do you think that is enough for you to find the eggs?

Indiana: I am not sure, but I will tell the kids and we will see what we can figure out.

The kids then went on a wild scavenger hunt. Finding goodies of chocolate coins along they way, but in the end they finally solved the final clue. Only to find a long lost crate that is covered in none other than… snakes! Oh no Doctor Jones hates Snakes! He then backed away, and the kids quickly dug through those scary snakes to reveal the long lost Dinosaur Eggs! Each kid then smashed the eggs and reveled a smaller egg that contained the parts of a three-dimensional dinosaur puzzle for them to put together later.


At the end, the kids were invited over to the favor table with their back packs in hand and fill them up with various prizes including: Molten Lava Putty, Dino Paddles, real fossils with descriptions, Creepy Crawlers. Dino Tattoos, and Dino Skeletons.