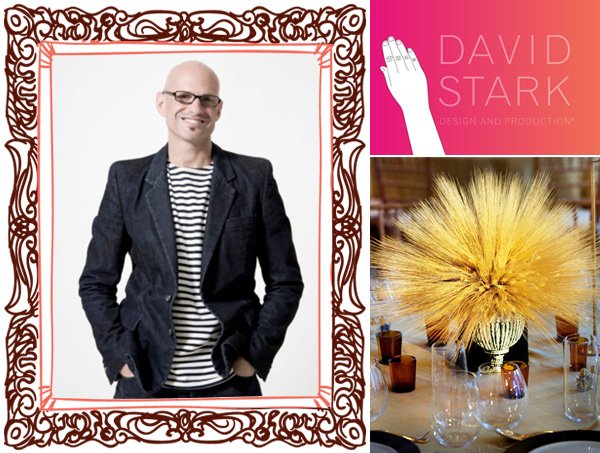 I recently had the honor to pick creative guru DAVID STARK‘s brain for some of his favorite fall holiday entertaining tips. True to form, his suggestions were anything but run-of-the-mill!

Read on for some cool, outside-the-box ideas from this highly accomplished celebrity event producer… including a fantastic, graphics-inspired Thanksgiving centerpiece that could easily be tailored to Christmas tables as well, and the cutest Turkey-and-gourd napkin fold idea that both young and young-at-heart dinner guests are sure to love. ENJOY! :)

HWTM: You are known for your creativity and imagination. Can you share an idea for a Thanksgiving table centerpiece that’s unexpected and “outside-the-box (or cornucopia!), yet still appropriate for the holiday?

David Stark: “Thanksgiving is the perfect time of year to use dry wheat to create a centerpiece that is both seasonal and really unusual.  We use glass cylinder vases but transform them with a graphic that we print out on a computer printer with a trompe o’eil image of an antique urn.  The illusion is modern and cool!  And people are often surprised because wheat  is generally not on the top of their list of floral materials!” 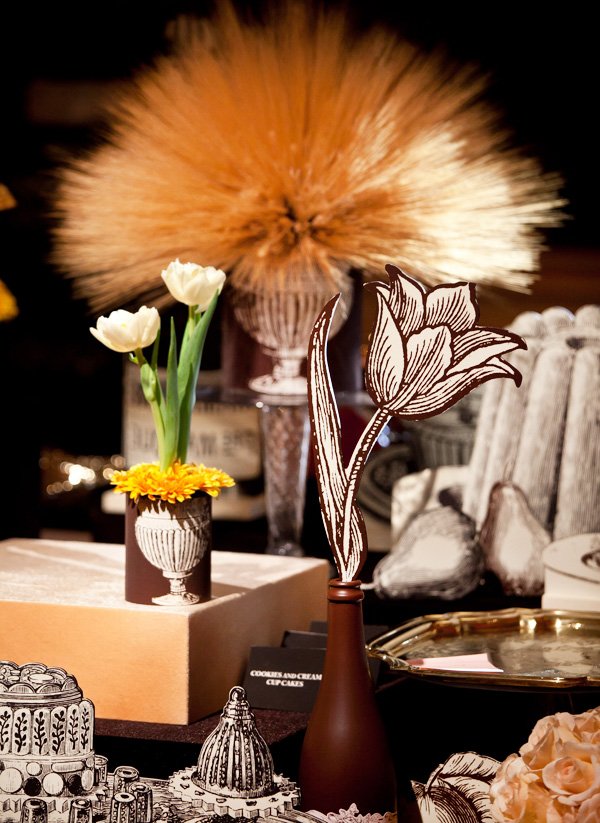 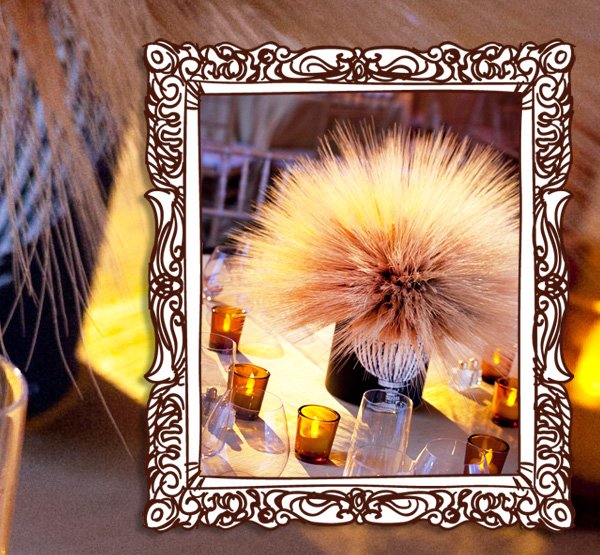 HWTM: Chairs are often dressed up at large events, but those gorgeous covers usually come with a big price tag attached. What are some creative ways that readers can decorate the chairs surrounding their own Thanksgiving table without breaking the bank?

David Stark: “One of the easiest tricks, and we do it often, is to fold an inexpensive throw or pashmina and drape it over the backs of the chairs.  You can use colors or neutrals, patterned pieces or solids, and the throws do wonders for both creating a “look,”  and transforming the chairs.  They also play double duty as a wrap if anyone is feeling a chill.  I like to make sure that the throws are all folded to the exact same size and are placed evenly on each chair so that the lines are crisp and clean. 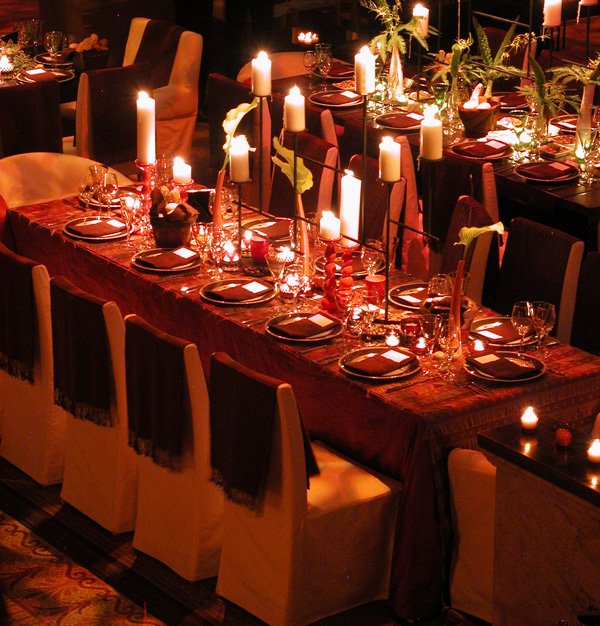 For a summer party, striped, terry beach towels are great fun, but when the chill hits in the Fall, cozier knits are the way.  If you are feeling especially generous, you can monogram or embroider the throw with each guests name and have the piece play double duty as a gift and their seating card!”

HWTM: Thanksgiving is traditionally celebrated with close friends and family. Do you have any thoughtful ideas for personalizing the party decor or place settings for your guests?

David Stark: “I love to have each of the details that are party throwing necessities become special moments.  The place card is a perfect example.  Rather than simply a standard card, I love for that to be an object or for the card to be attached to a special surprise.  We recently created a party for an animal lover and at each place setting, a special cut and folded paper animal became both a special jewel and the place where the guest’s name was written.  Each table had different animals, and the guests marveled over how something so simple could give such personality to the dinner.” 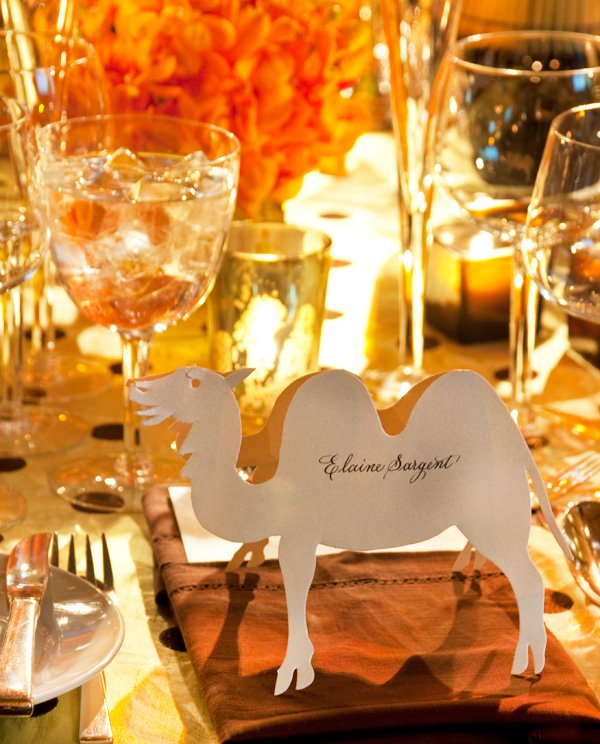 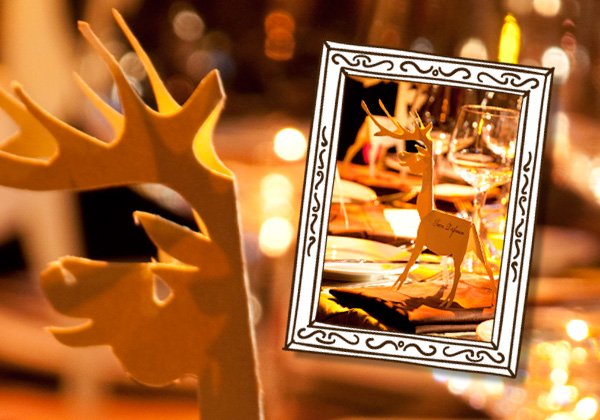 HWTM: If you were to sit down right now and plan a Thanksgiving party for your own friends & family, what color palette and style would you go with and why?

David Stark: “In some of the recent, larger weddings that we have designed, we have really been embracing foliage as a decorative feature.  It used to be that clients could only see the magic in flowers, but we are now seeing grand arrangements of foliage as equally chic.  I am in love with brown and dark foliages and we have been lassoing Plum and Pear foliage in equal measure for these affairs.   I would immediately go this route for my own  Thanksgiving décor  – albeit on a MUCH, MUCH smaller scale…. 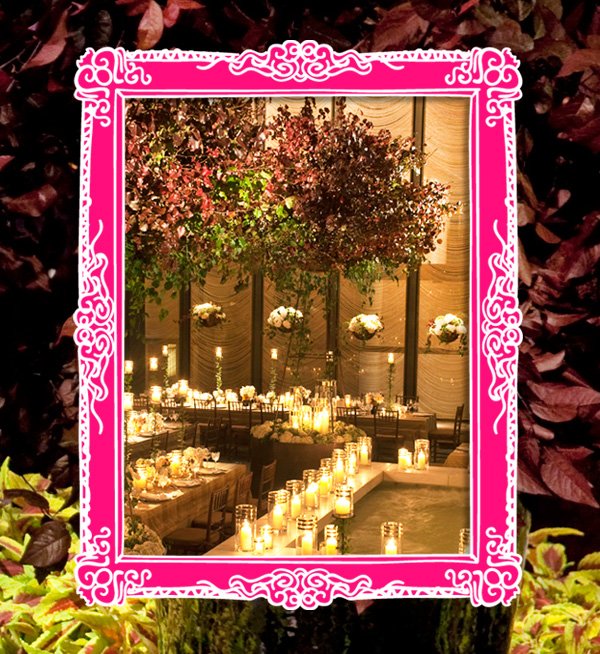 …I would mix in some more light hearted touches to make the table less serious.  One of the napkin folds we created for our book, Napkins with a Twist transforms the napkin at each place setting into a Turkey’s tail fan of feathers while a curvy gourd becomes the bird’s body.  I look forward to Thanksgiving every year so I can pull this trick out!  My nieces and nephews LOVE it.” 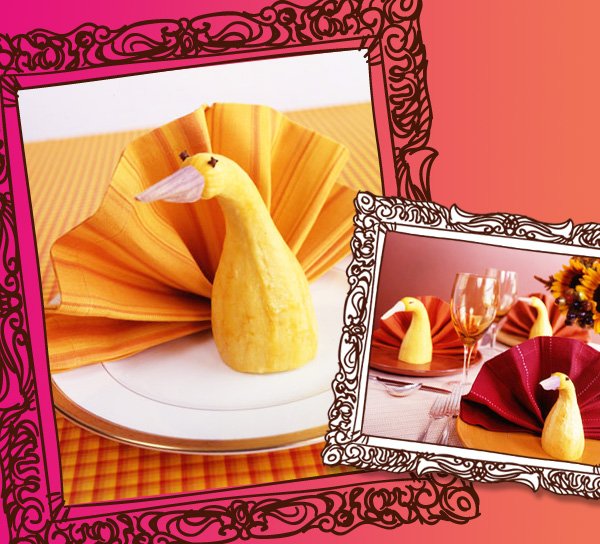 HWTM: What are the hottest trends that you’re seeing in table coverings this season? (i.e. specific colors or patterns, textiles, patterned tablecloths, ways linens are being displayed or utilized, etc.)

David Stark: “We’re seeing (and using) a lot of natural, neutral materials enhanced with touches of metallic and subtle sequins.  Sisal next to nubby raw silks and linens with embroidery, burlap juxtaposed to metallic gold.  It’s the juxtaposition and confidence of mixing rustic and natural with metallic and fancy that is creating a look that feels fresh and chic.”

David Stark is a renowned New York-based event producer as well as President and Creative Director of David Stark Design and Production. This full service event design and planning firm is celebrated for the innovative, imaginative events it creates fora wide range of high wattage celebrity clients such as Beyoncé Knowles and Jon Stewart, major corporations such as Target, TBS and Condé Nast, as well as high visibility fundraising galas for the nation’s most elite not for profit organizations.

In April 2010, Stark released his latest book David Stark Design; a visually stunning monograph that documents David Stark Design and Production’s design philosophies, conceptual process, and breadth of work put forth since the Company’s inception in 2005. His previous books include Napkins with a Twist, To Have & to Hold: Magical Wedding Bouquets, and Wild Flowers: Projects and Inspirations. Check out his latest collaboration with popular retailer West Elm right here.