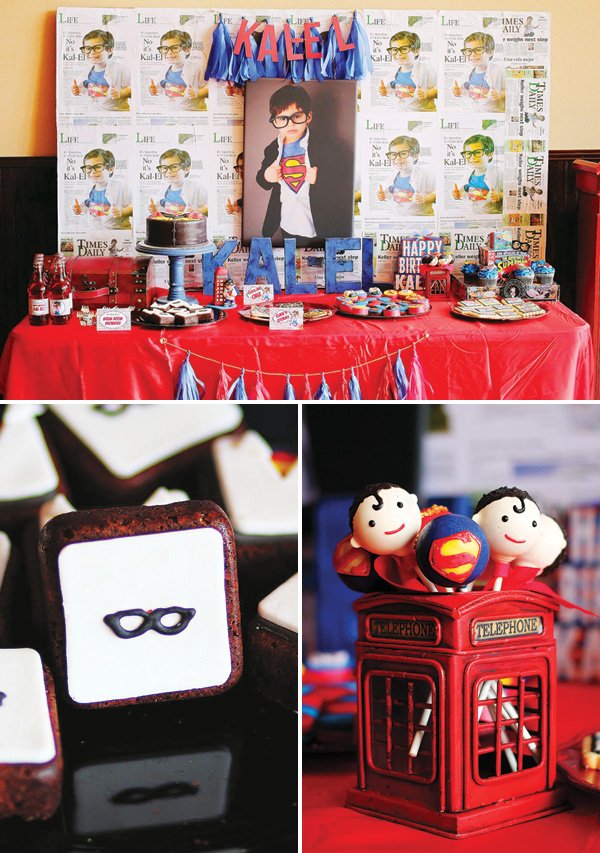 When your love of Superheroes extends to what you name your kids, it becomes pretty obvious what their first big party should be! Lauren Borquez of Capes and Crowns styled this {Man of Steel Inspired} Superman Birthday Party for her son, Kal-El, who’s name is inspired by the name Clark Kent was born by on planet Krypton :). Lauren took every aspect of Superman’s life and flew with it — from a bright green Kryptonite candy table, to a Smallville inspired farm table! 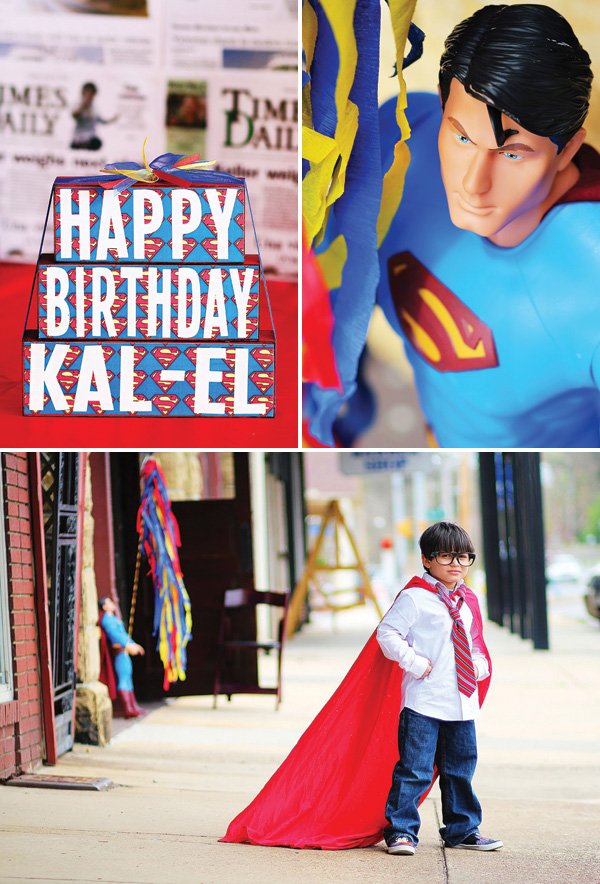 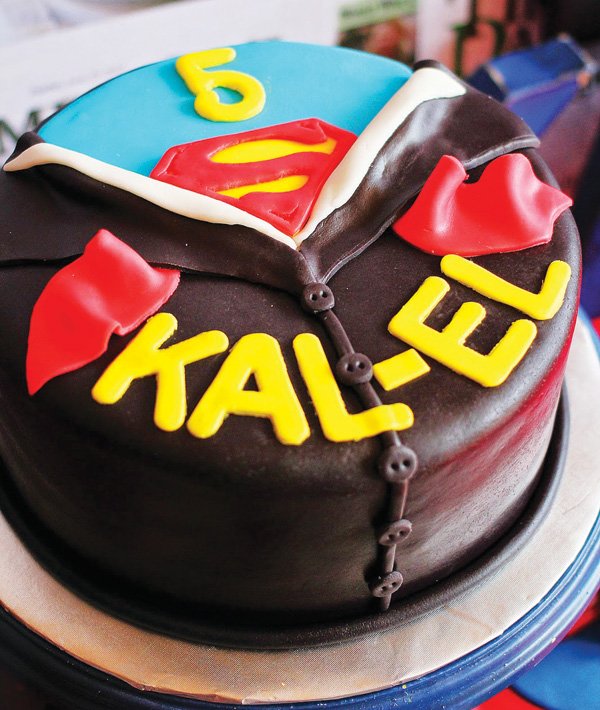 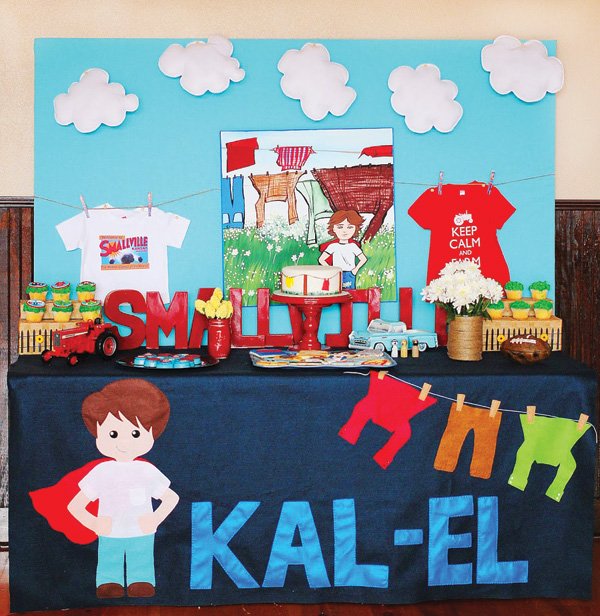 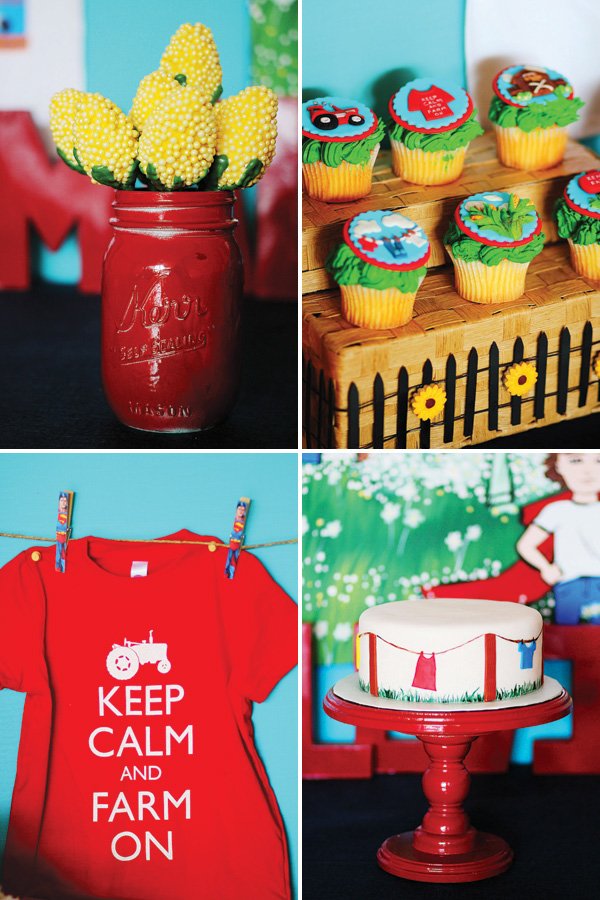 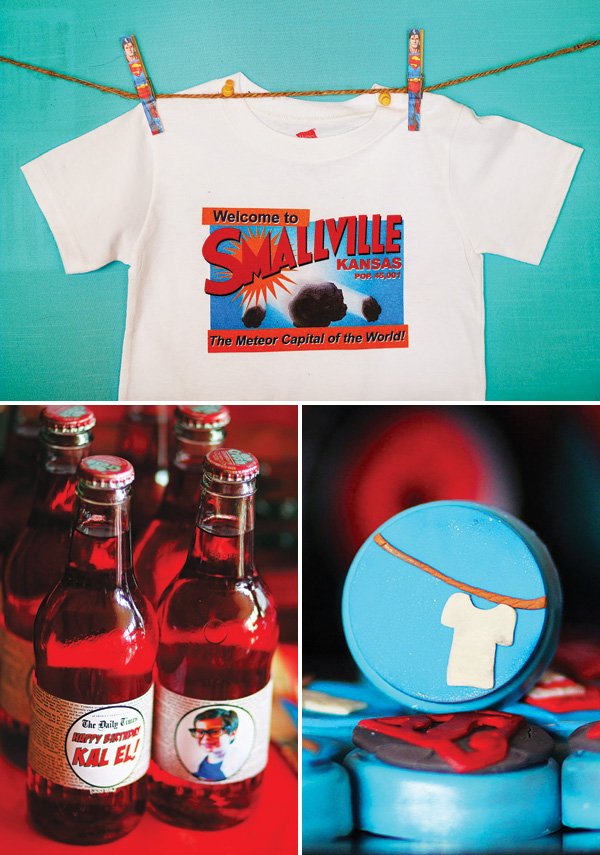 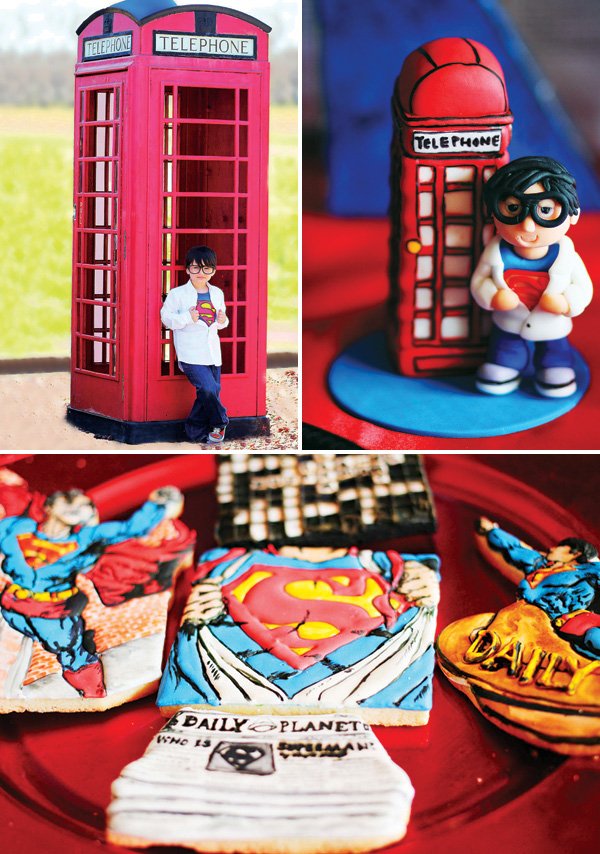 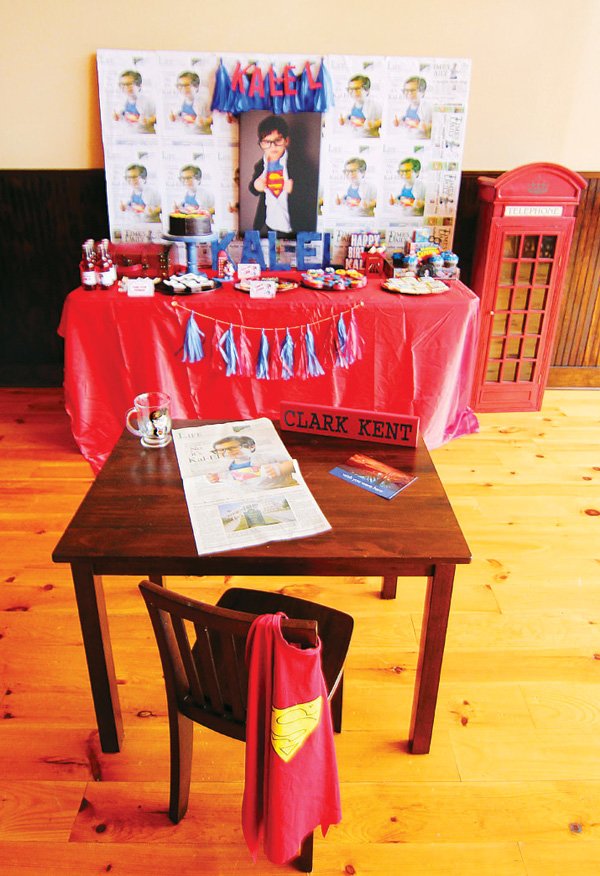 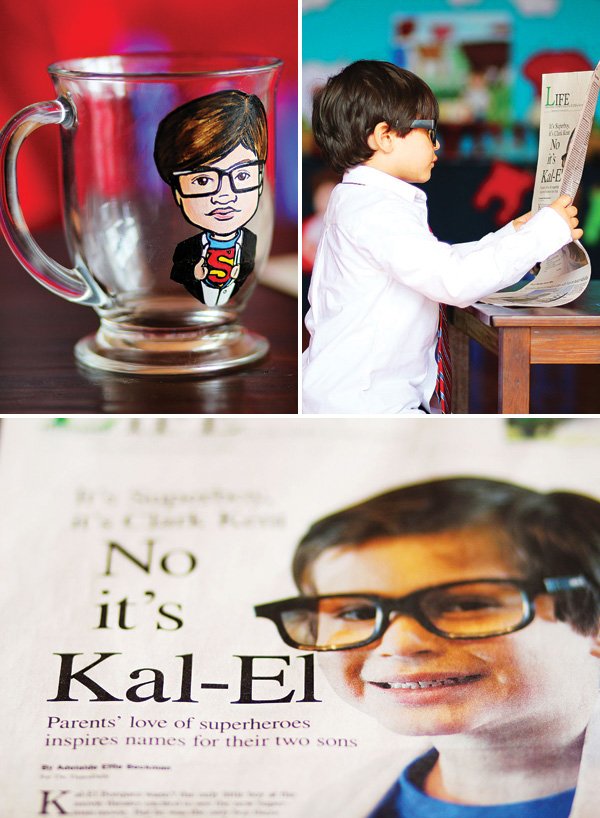 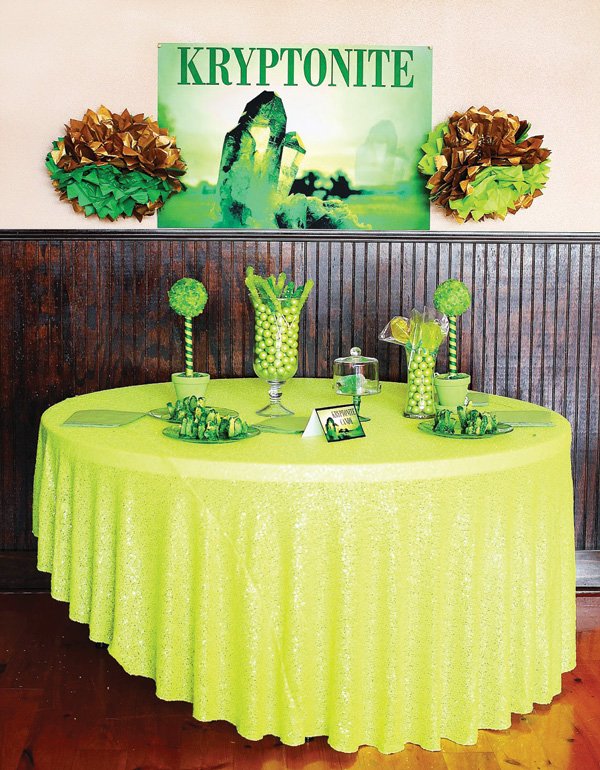 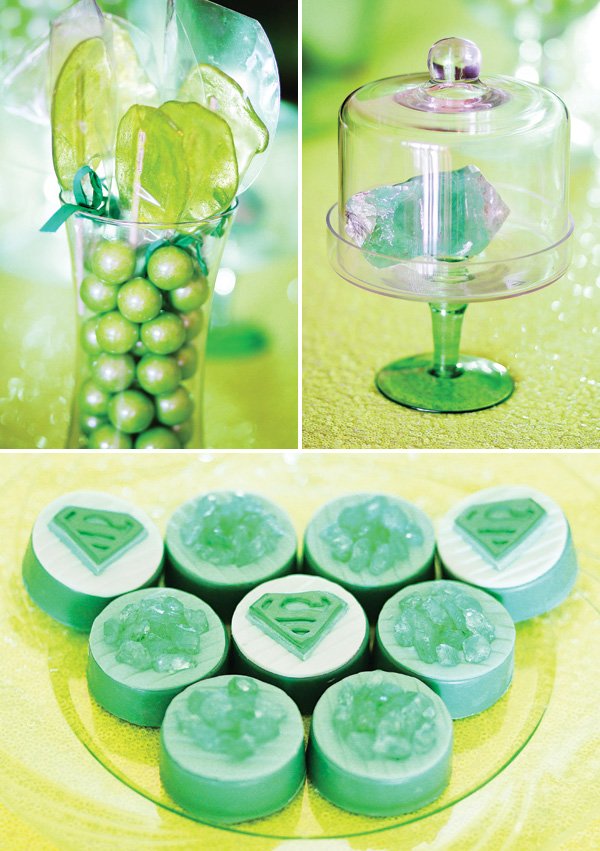 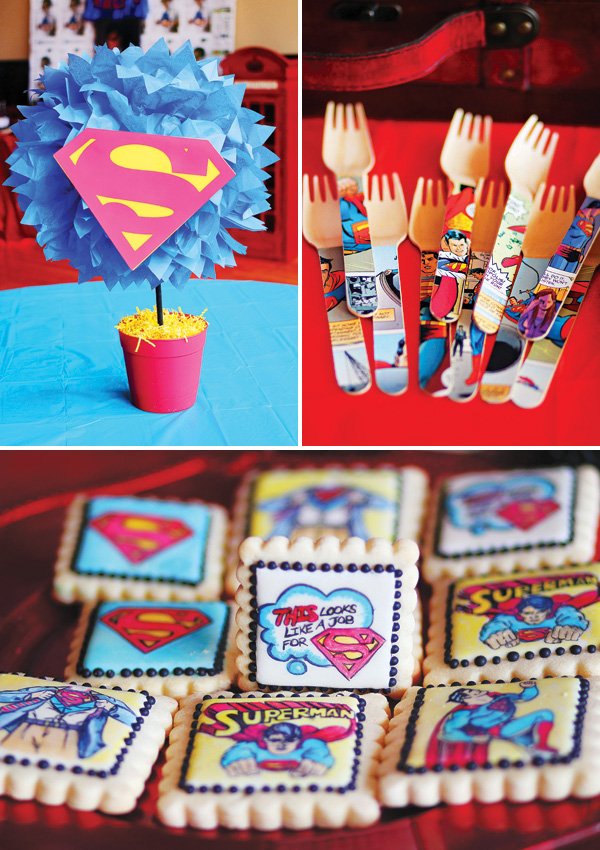 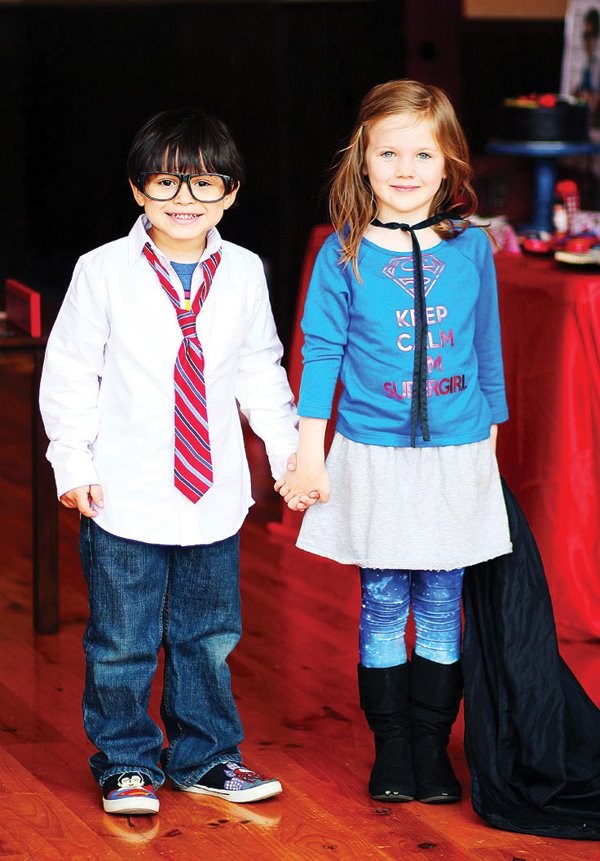 PARTY DETAILS as told by Lauren…

I feel like I have been waiting to plan this party ever sense my first born took his first breath and we named him Kal-El! The day finally came! This event was my largest undertaking and without a doubt my most sentimental party thus far. I wanted to pull from all elements of Superman. Vintage, modern, and especially the most recent Man of Steel movie! I knew I had to narrow down to 3 tables. Trust me, I could have easily done more!

For the first table I knew I wanted to incorporate his feature in our local newspaper because that was such a special thing for them to feature him and cover why Chris and I decided to name our children after Superheroes. I decided to mod podge the article (because who am I kidding, we bought like 100 papers) to the backdrop and then showcase one of his portraits over it. The table represented The Daily Planet — Clark’s job with the newspaper. I wanted superman elements all over the table because Clark is really Kal-El. :) I just didn’t want anything overt or commercial looking so I focused on various aspects of his life. One of my favorite details of the main table was the simple satin table cloth hinting at Superman. My most favorite had to be Clark’s “office desk” complete with professional nameplate in the front. I also placed Kal-El’s article on the desk, along with a coffee mug in his likeness. If you look closely at the post card on the “Clark” desk you will also notice there is a post card. It says “wish you were here”….it’s a picture of Krypton. :) Perfect reminder of “home” at work.

My next table would cover Clark’s/Kal-El’s young life in Smallville, Kansas with Jonathan and Martha Kent. I wanted to showcase everything that made his early years special. The backdrop was based on a very emotional moment in the movie for me. A young Kal-El, being raised as Clark in a conforming but mostly loving world, amongst a clothes line in the middle of the country, with a make-shift cape made from a sheet hanging to dry he found his identity. Even as I child he some how understood his calling and that scene foreshadowed it. I had an amazing artist I found online paint her version of that scene on canvas for me. I then bought shirts and carried the clothes line element all the way across the backdrop.  For the cookies, I had farm and Kansas elements, I also requested quote cookies. I got about half way thru opening them and got to the cookie that said” the world’s too big mom” Not going to lie I cried like a baby :) There was also a dog in that scene that can be seen running with Clark as he plays on the farm. I wanted this event to represent Kal-El in the same way so I had peg dolls created in the likeness of our 3 dogs. Everything felt so personal. It was just what I envisioned.

Lastly, and just for fun, I made sure to have a candy table. Sugar can be the enemy for parents so what better than a kryptonite table to indulge their sweet tooth! The green really popped and I think it was the perfect note to end on!

This was a huge milestone birthday — the big 5 — not sure how much longer he’ll want his party planning momma making a dessert table fuss over him so I knew I had to make it extra special. These beautiful images were created by Danielle McCann.