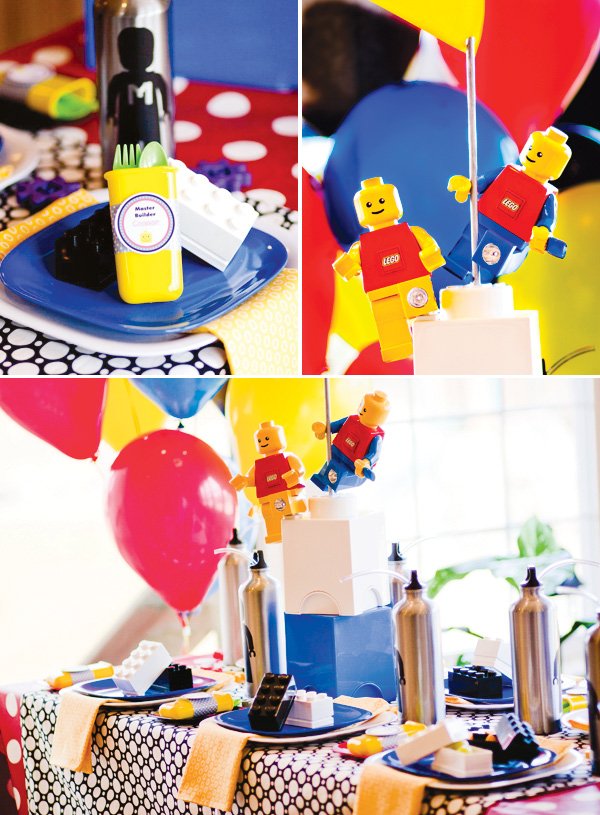 Are you ready to learn how to build a super fun LEGO party? Well Giggledust Parties is here with the inside scoop! Jamie dreamed up a fantastic Master Builder LEGO Birthday Party for her son’s 7th birthday. This is SUCH a great theme idea that opens the door to lots of creative activities for those energetic boys. ;) 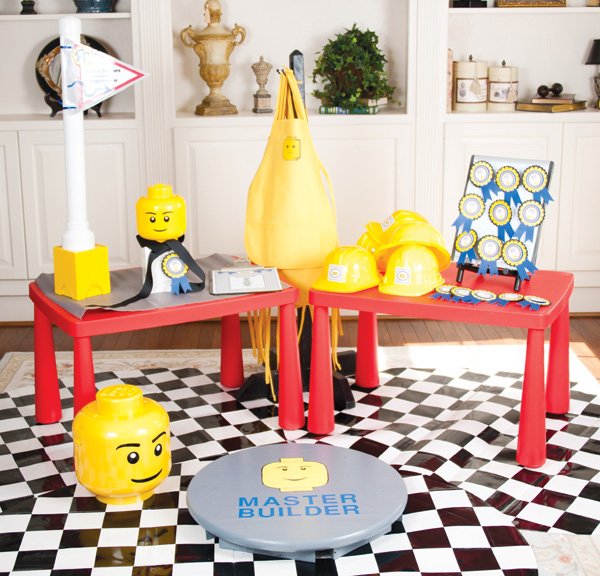 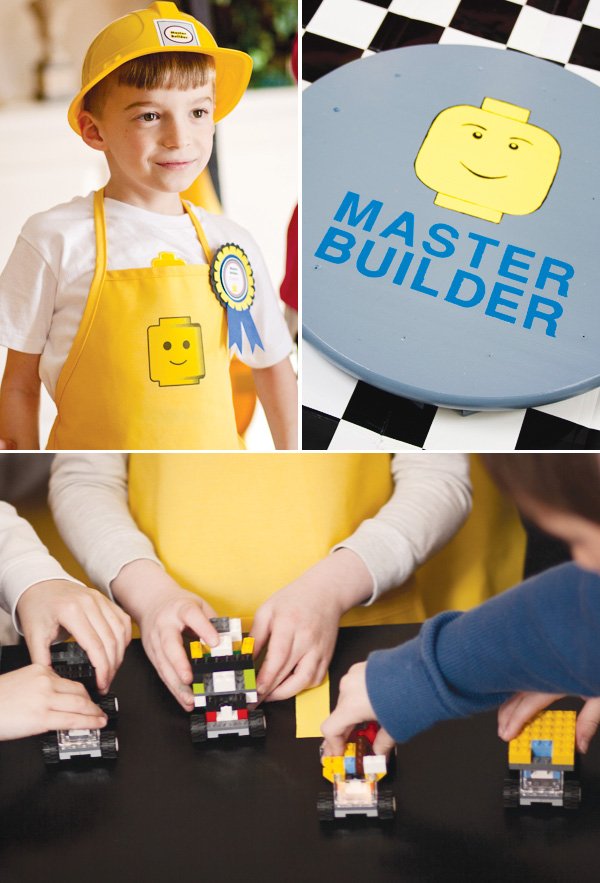 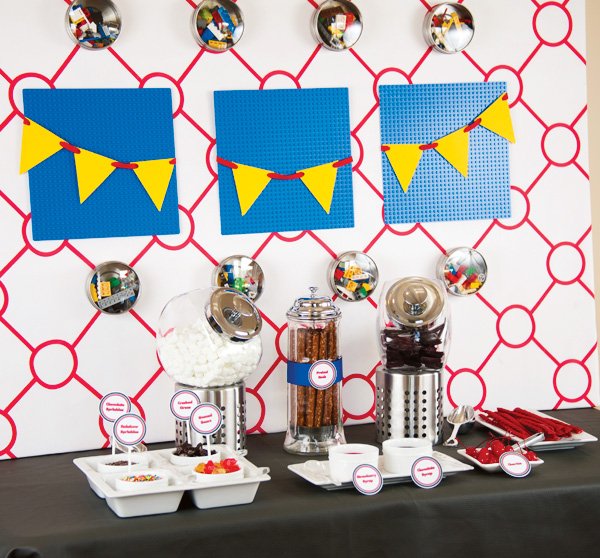 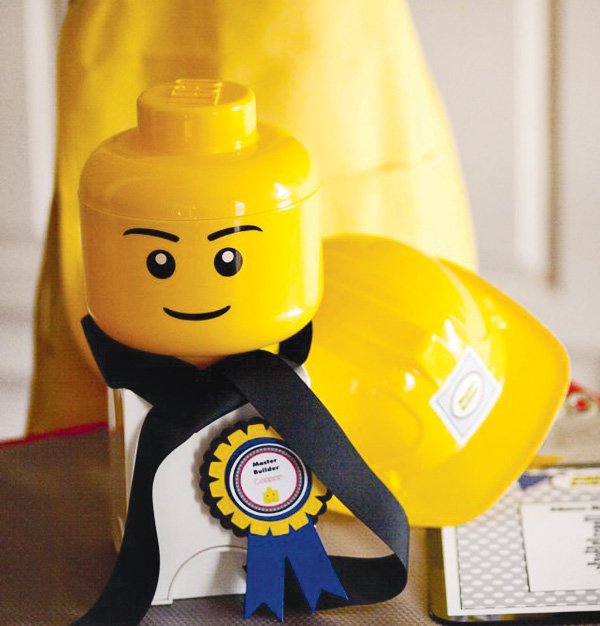 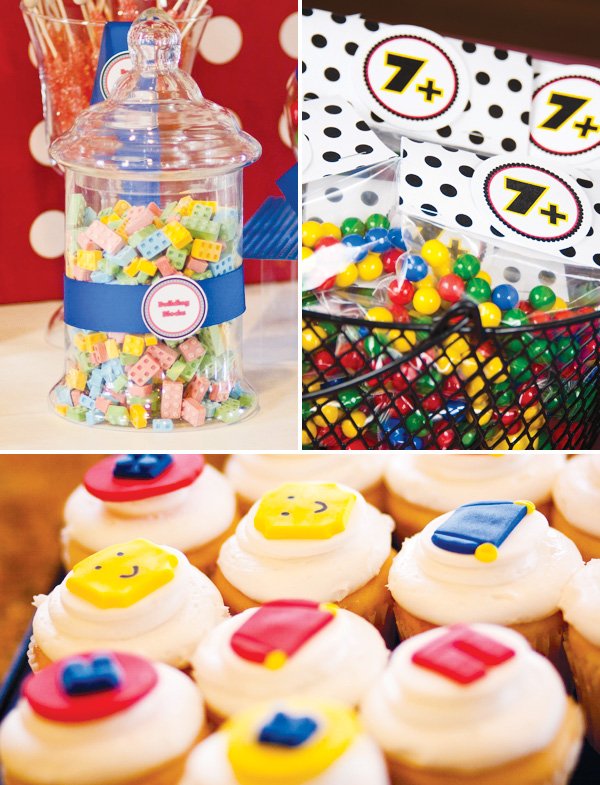 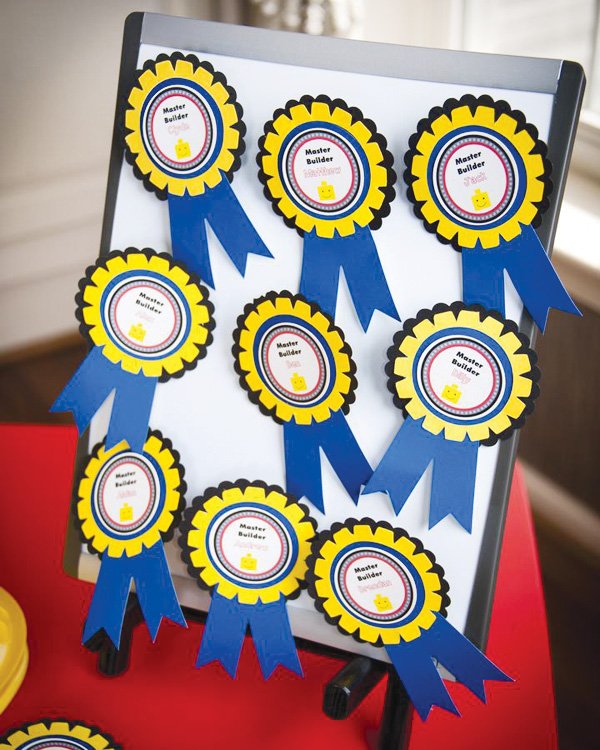 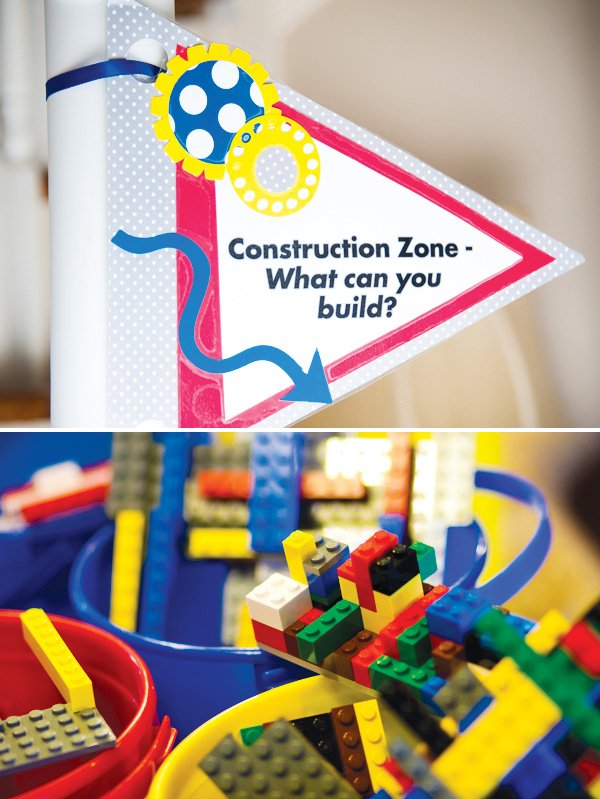 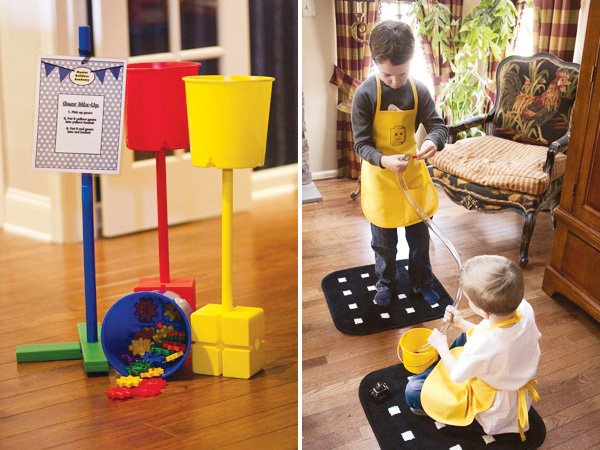 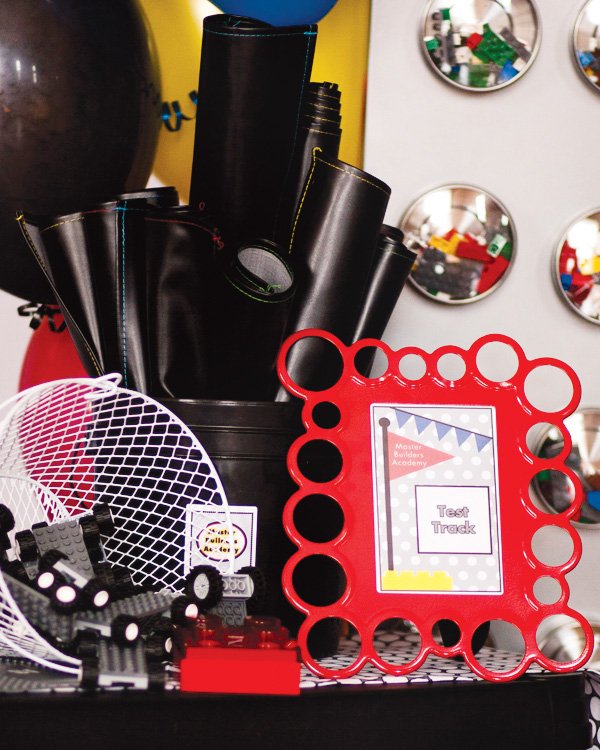 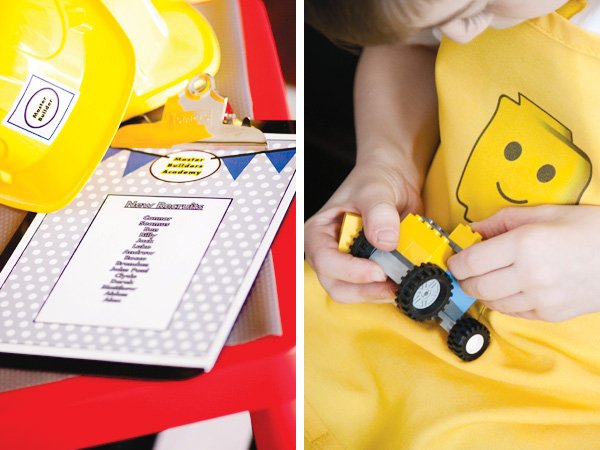 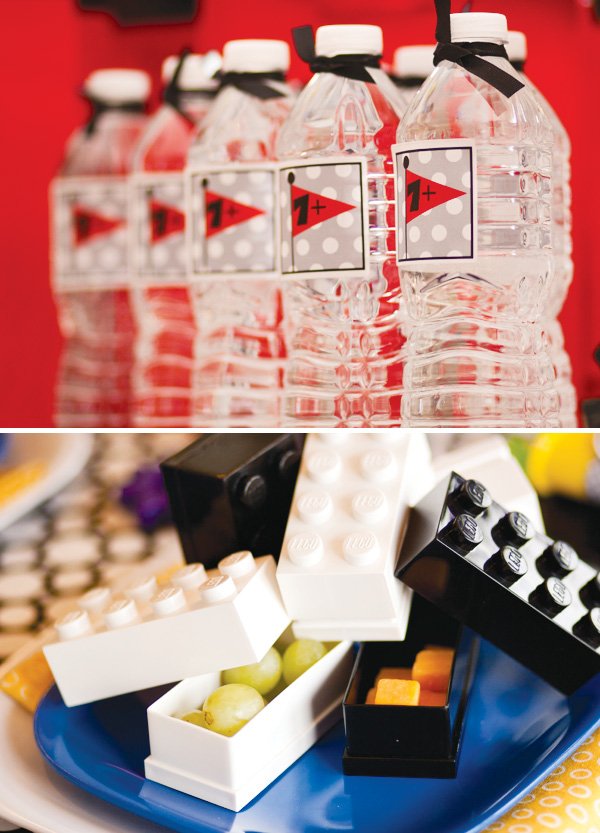 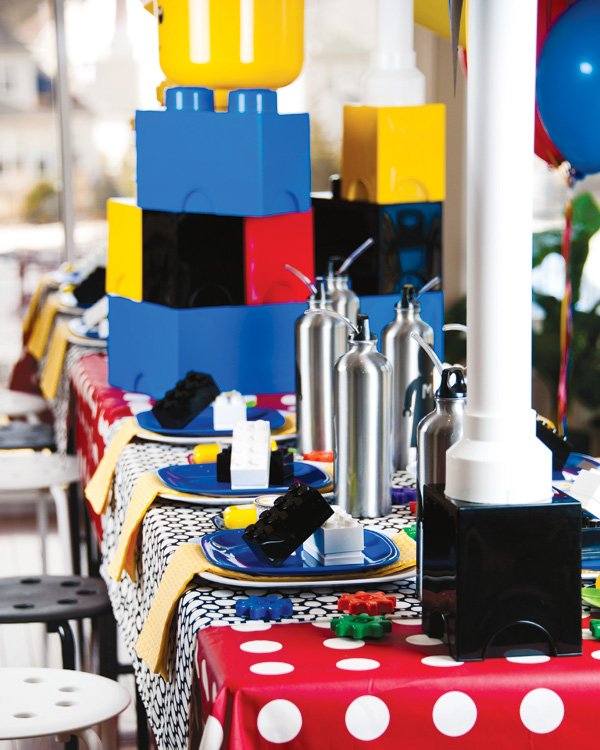 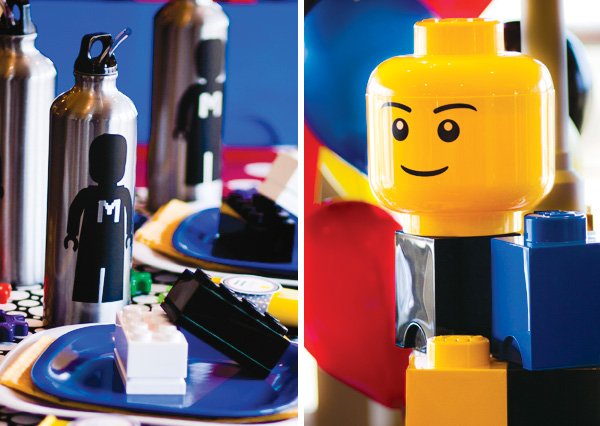 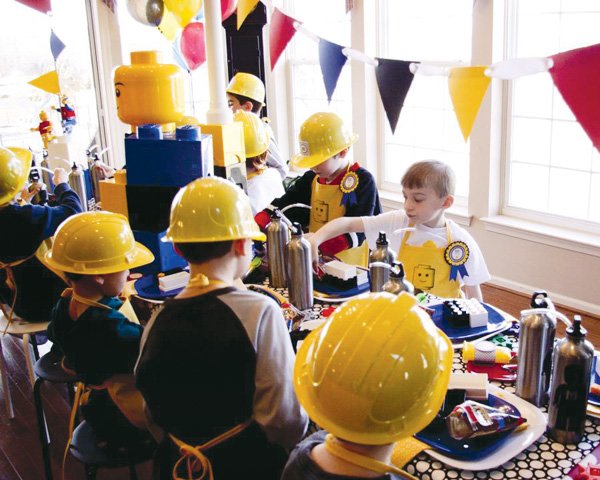 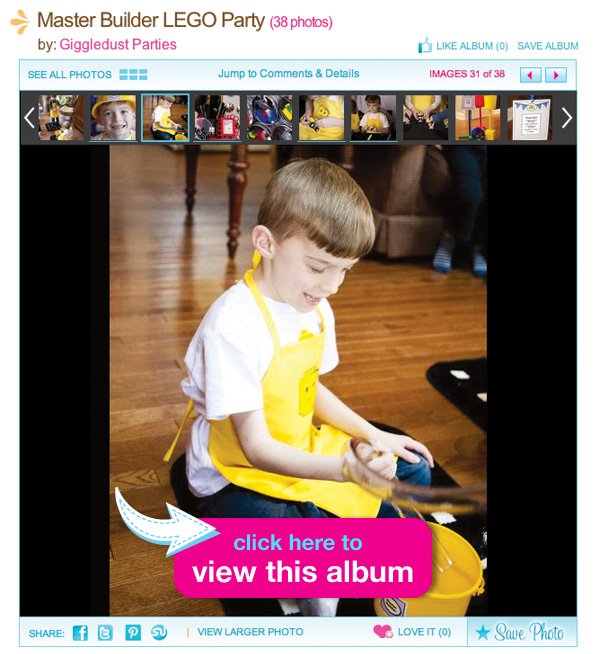 PARTY DETAILS, as told by Jamie…
:

For my son Connor’s 7th Birthday, he wanted a LEGO party. Connor loves LEGOs and will sit for hours following the instruction booklet step-by-step until the kit is complete! He gets such joy out of building the sets that I wanted the focus of his party to be on “building” and narrowed the LEGO party theme to becoming a master builder.

Our family visited Legoland Florida this past fall and the tabletop decor was inspired by the entrance to the park. It is so colorful and looked like so many creations that have been built in my house using every LEGO my son could find. To recreate the feel, I used the LEGO storage containers from The Container Store to build my own LEGO tower complete with a LEGO man head, colorful banner and flagpole with the sign “Master Builders Academy.”

The tablecloth was a combination of the large red polka dot fabric from IKEA and table runners I made from a black and white fabric I purchased at a local fabric store. I also found a great yellow and white fabric that was used to make the napkins for the table. The red, black, white and yellow color combo gave the table a playful look! The melamine plates were purchased at Target several years ago and were the perfect color combination for LEGO! Guests were excited to find grapes and cheese cubes in LEGO snack containers from The Container Store. The drink containers were purchased from Etsy and had a vinyl LEGO man decal with an “M” for Master Builder. My husband drilled out holes in the caps and I bought icemaker tubing for straws! It made it much easier and neater for the young guests to not have to unscrew the tops!

As guests were arriving, I had lots and lots of LEGOs ready for the boys to start building. Once everyone had arrived, we kicked off the party by letting the boys know that they were going to become master lego builders at the party. The first step was for the guests to go to the registration area where they were given their LEGO apron. From there, we moved on to the Master Builder Training. For guests to become a master builder they needed to complete a series of ‘tests’ that highlighted the skills a master builder needs – 1. be able to follow directions, 2. work as a team, 3. build and test a lego carr and 4. have a “good eye” for detail.

There were stations that the boys went through to complete each of these activities. For the following directions test, we set up an obstacle course where guests had to follow step-by-step instructions to complete. I purchased an activity set from a school supply company and used it to put together 4 games. The kids loved this and really cheered on their friends as they made their way through the course. For the work as a team test, I was inspired by the fabulous activity at Anders Ruff’s LEGO Party, we had boys feed legos thru plastic tubing to their teammate and once complete they had to ring a cowbell. For the assemble and build activity, my husband build a test track where the boys built their own lego race car and had to send it down a track to make sure it worked. We provided the boys with the car base and they built the rest of the car. They loved watching their creations zoom down the track! For the good “eye” activity, we went on a treasure hunt for the missing lego. Clues were left throughout the house and the guests had to follow them together to find the missing lego. I found these adorable rings with googly eyes at the party store that were the prize for finding the missing lego.

Once all of the boys completed the activities, we had an award ceremony where each guest stood on a raised platform and was given a Master Builder construction hat and award medal. We then went to the LEGO table where lunch and cupcakes were served. We sang happy birthday and guests enjoyed a make your own sundae bar and candy buffet. Connor and his guests had a great time! I knew it was a success when my son asked for the same exact party next year! :-)