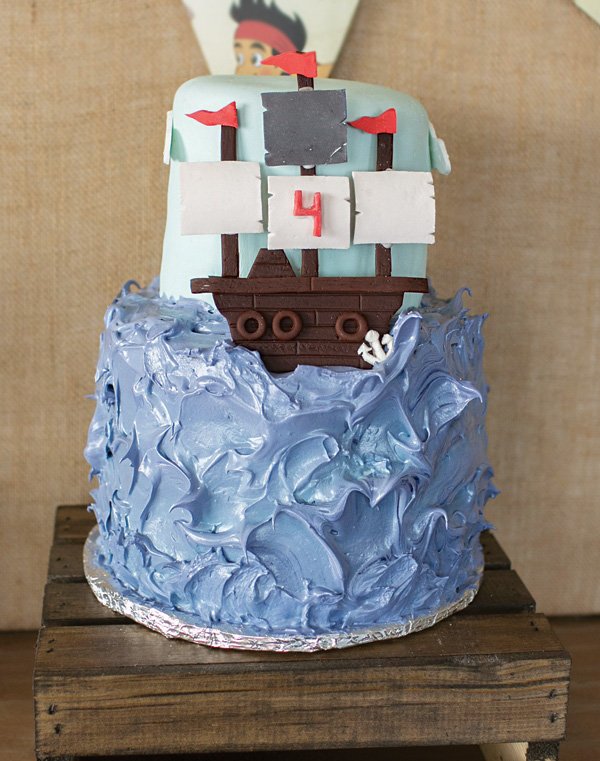 Xiomara Roman of A Styled Fete has a son who loves the Disney show, Neutral Jake & the Neverland Pirates, so she claimed her #1 Mom title and threw this awesome Neutral Jake & the Neverland Pirates Birthday Party! This party has a treasure chest FULL of cute ideas — most of which would be so easy to replicate! Like that treasure map table runner, so clever and you know kids would go crazy over it! If you’re looking for more Neverland Party inspiration, be sure to check out these other posts as well: here, here, here and here. 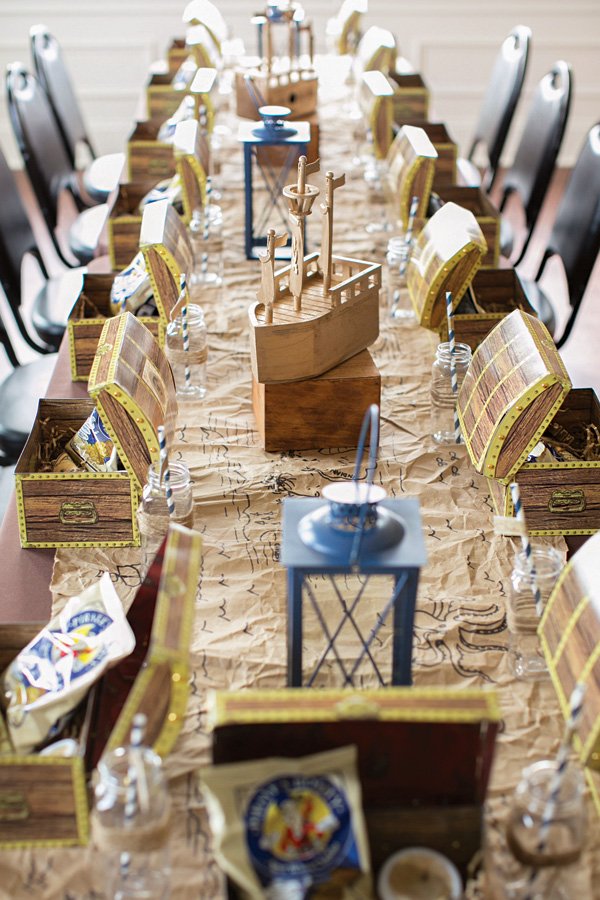 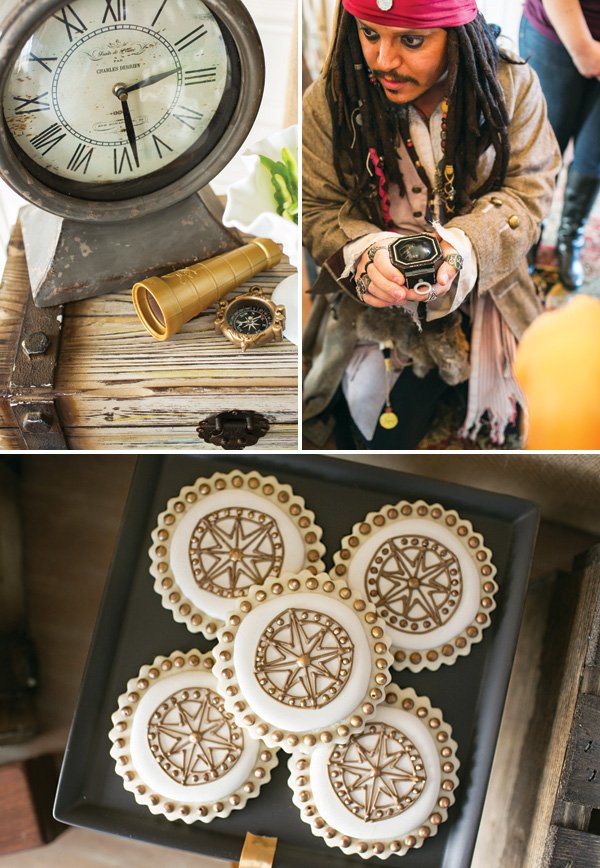 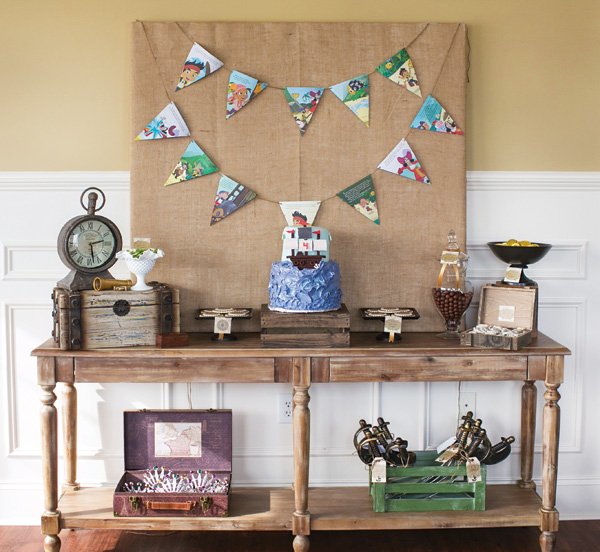 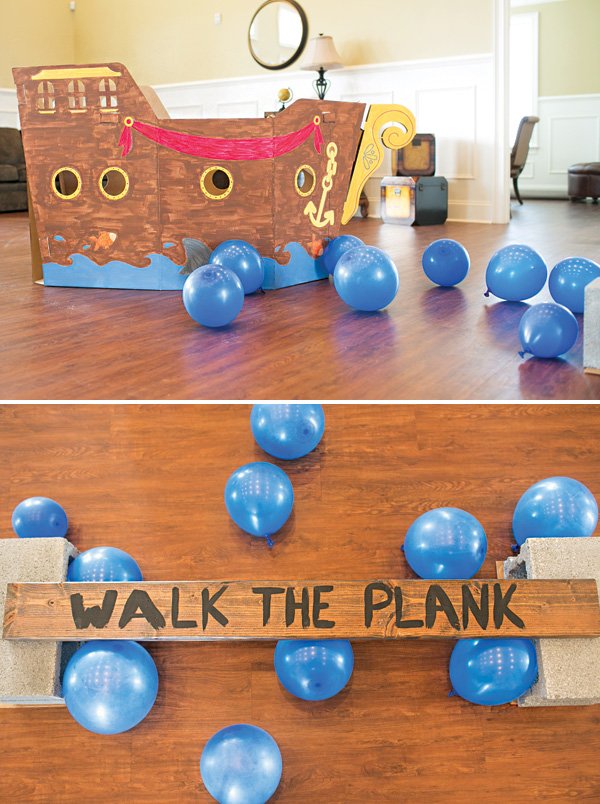 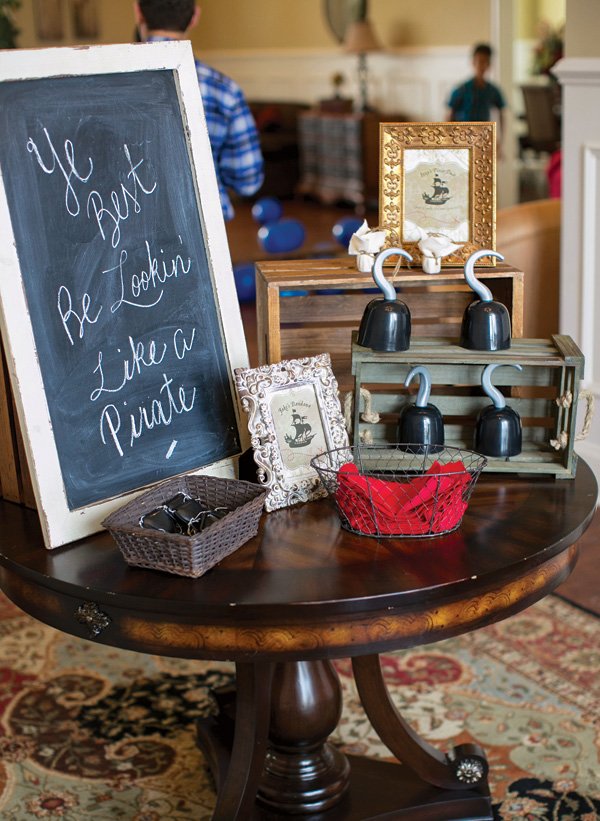 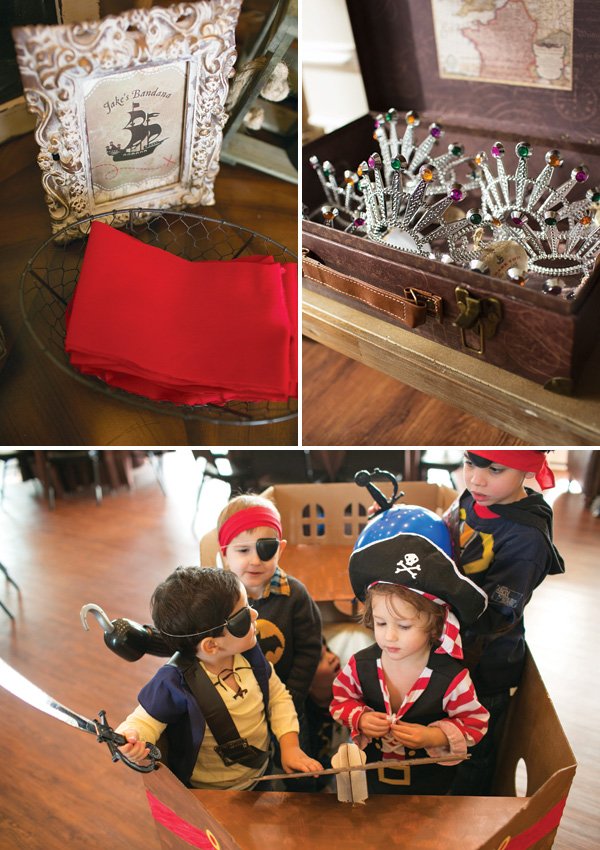 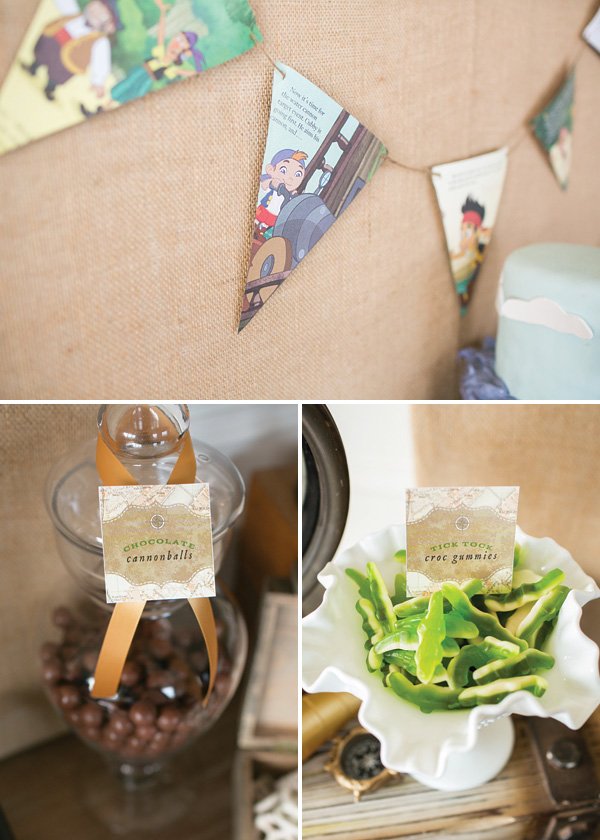 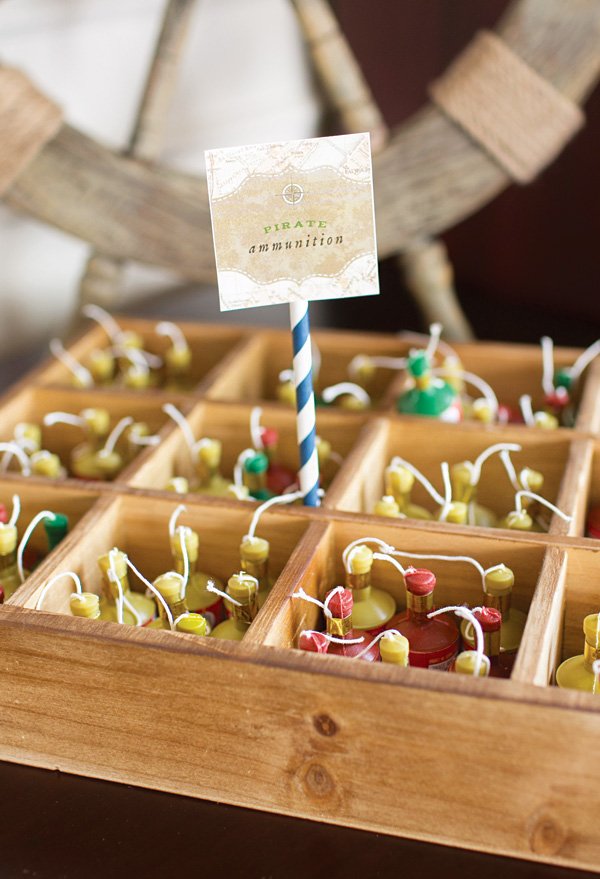 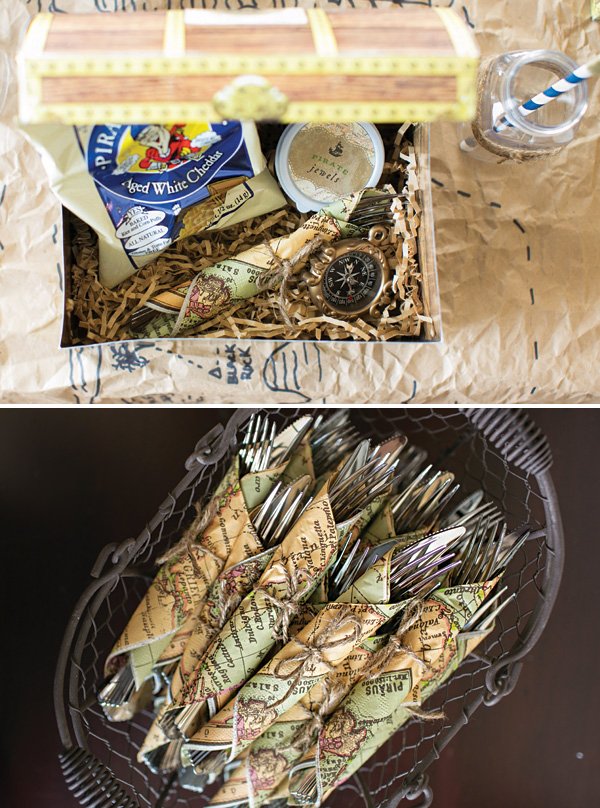 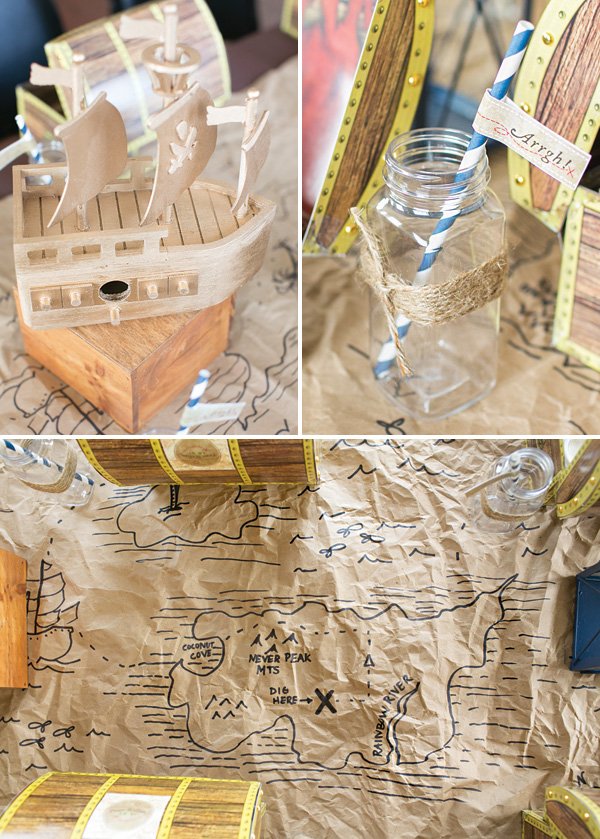 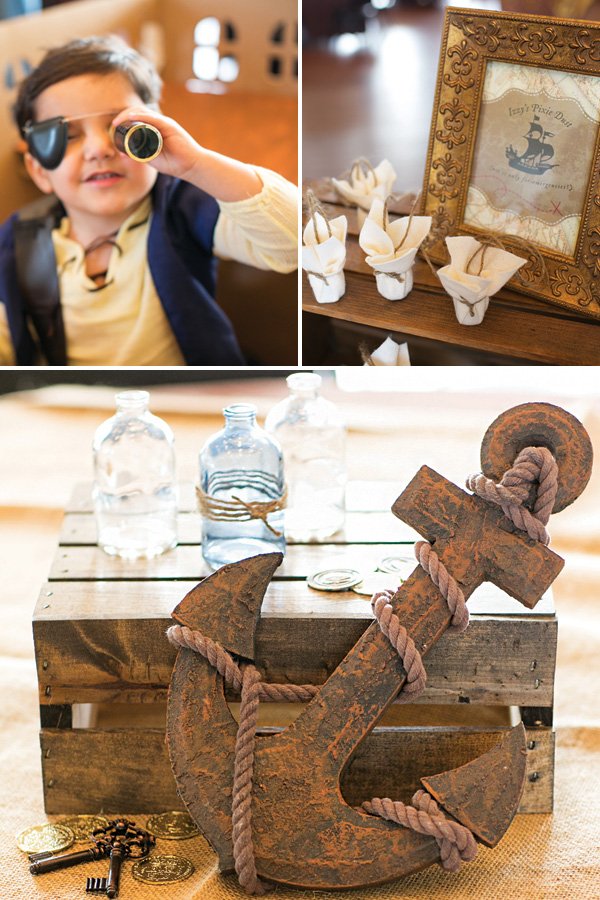 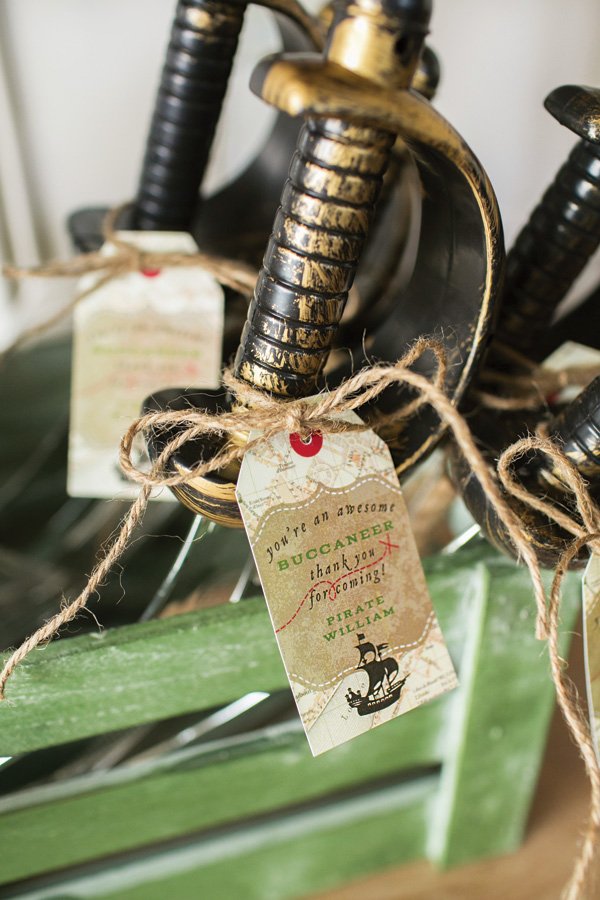 PARTY DETAILS as told by Xiomara…

This year we decided to go with a Pirate inspired party for William’s 4th Birthday. He loves to pretend he is Jake (from Jake and Neverland Pirates) and go on “treasure hunts” around the house, so a pirate themed party seemed like the obvious choice for him. I found some really cute napkins that looked like a map and I was immediately inspired to design the party around them. I loved the idea of a neutral color palette with hints of green, gold and navy blue. I am not a fan of skulls and I realize that they are a staple on every pirate party out there but I really wanted something more subtle but that would still say “pirate party.” Anders Ruff designed the perfect printables for the party using a vintage map, compass and pirate ship graphics. All the party details were beautifully captured by Stacy Hart Photography.

We encouraged our little guests to come dressed as pirates. When they arrived to the party, they were greeted with a table set up with eye patches, Jake’s bandanas, hooks and Izzy’s pixie dust necklaces for everyone to wear.

One of my favorite elements I created for the party was the huge “treasure map” table runner for the kids table. While I am obviously not an illustrator, I had so much fun drawing all the islands, sea creatures, pirate ships and coming up with silly names for all the creeks and lagoons on it. The kids really enjoyed it too!

I also purchased cardboard treasure chests for each of our little pirate friends and arranged them on the kids table. The treasure chests contained pirate booty, “pirate jewels” (fresh fruit cups), a rolled “map” (napkin with silverware) and a toy compass. I used navy blue lanterns and gold wooden pirate ships for centerpieces.

The adults tables were decorated with wooden crates, glass bottles with jute, gold coins, skeleton keys and an anchor.

I used a two tier gray washed console to set up the dessert table and a burlap covered canvas for our backdrop. To bring in some of the “Jake and Neverland Pirate” details, I made a pennant banner from storybook pages which I feel was a good way to incorporate it into the party décor. The desserts consisted of the cake that resembled a pirate ship at sea, cannon balls (chocolate malted balls), chocolate gold doubloons, skeleton bones (white chocolate pretzels) and crocodile gummies arranged next to a vintage clock (tick tock croc gummies). Perhaps my favorite sweet treat at the table were the beautifully detailed compass cookies by Sweet Goosie Girl which were not only gorgeous, but yummy too!

At the bottom of the console I arranged the party favors. Each boy took home a pirate sword and every girl received a pirate princess tiara, both with a coordinating thank you tag.

No pirate party would be complete without a pirate ship! I knew William and his friends would love to play pretend inside a pirate ship. I found one online and painted it to give it a more realistic look. Although painting the ship was more time consuming than I had anticipated, it was worth all the extra work. The kids absolutely loved it! Next to the pirate ship, the kids had so much fun walking the plank.

Since my little pirate loves adventure, we hired a pirate entertainer to come to the party. He made William captain for the day, gave each child a pirate certificate, lead them on a treasure hunt and made balloon swords. The kids loved the balloon sword fight! After this, they got to fire their “pirate ammunition” which were actually party confetti poppers.

I decided to make a pasta bar for the party. William’s favorite food in the world is mac n cheese and the pasta bar idea seemed like a good way to serve everyone a dish they could customize to their liking. It was not only delicious but also fun and interactive! We had three choices of pasta: “sea” shells, penne, spaghetti and three choices of sauce: homemade meat sauce, alfredo and cheese sauce. Toppings included grilled chicken, sautéed onions, peppers, mushrooms, broccoli, parsley and grated parmesan cheese. We also served a salad and bread rolls. The kids sipped on some apple juice from plastic milk bottles adorned with jute.