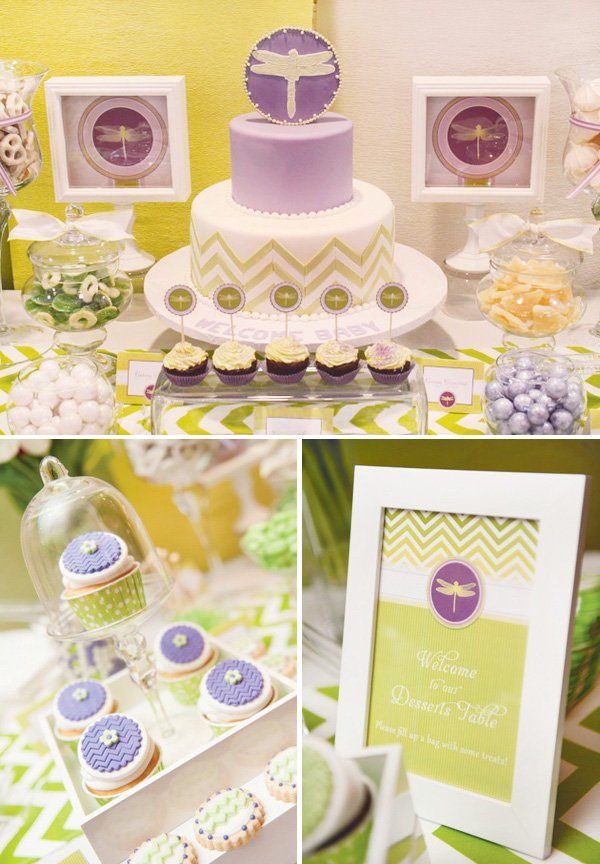 Sarah of Dreamers Joy Events & Design created this charming Dragonfly Baby Shower for her sister and brother-in-law. (She also threw them a gender reveal party… what a nice sister!!) The vibrant green, white, and purple color palette and cool ombre chevron pattern lent such a fresh and modern vibe to this sweet celebration. And speaking of sweet…we’re loving the abundance of stylish desserts too! ;) 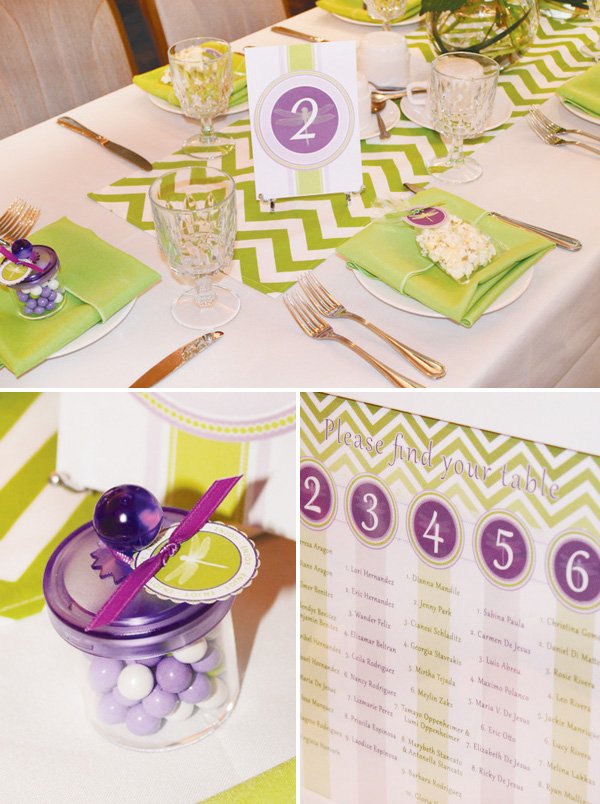 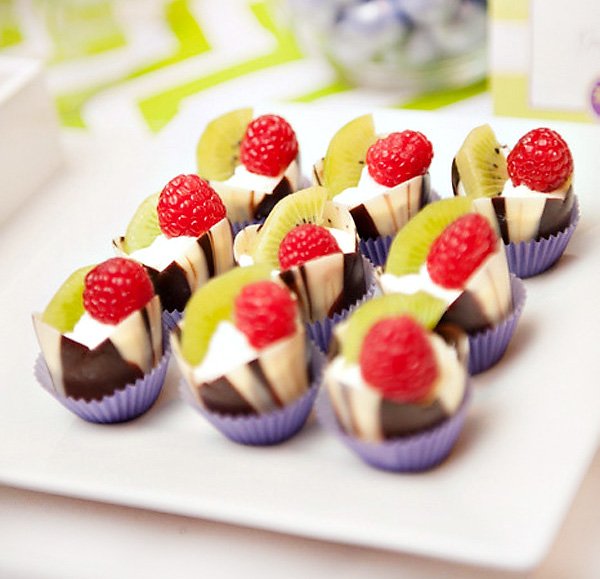 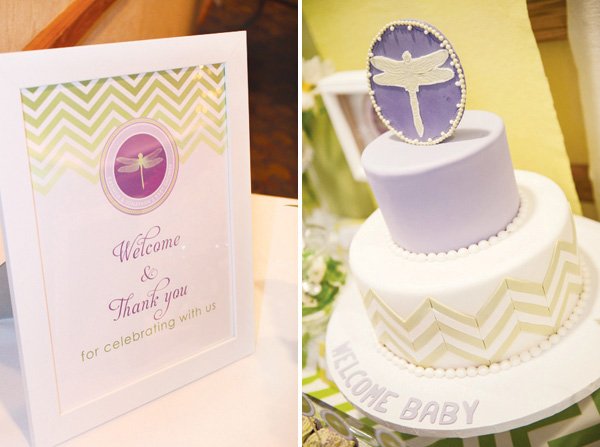 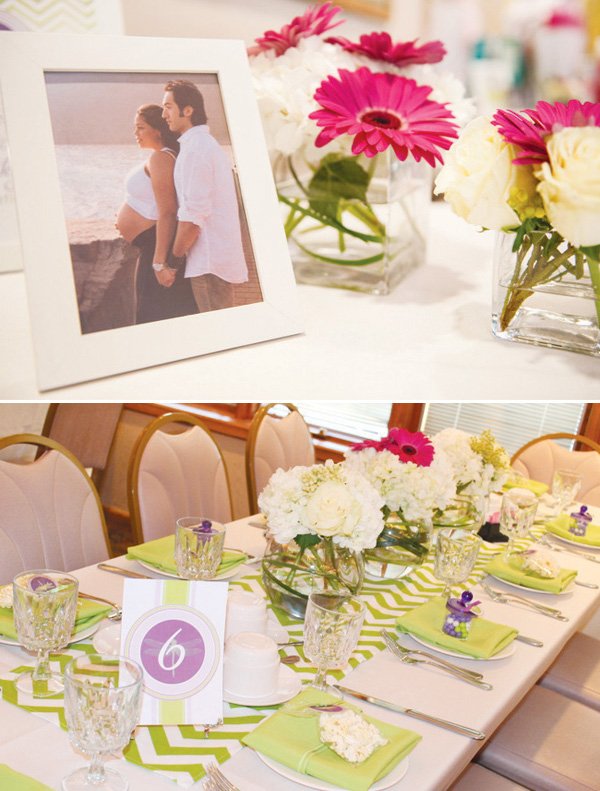 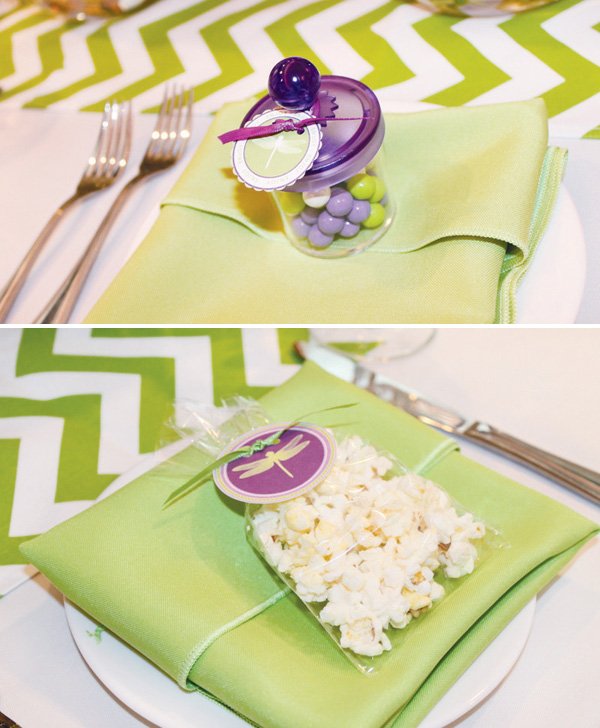 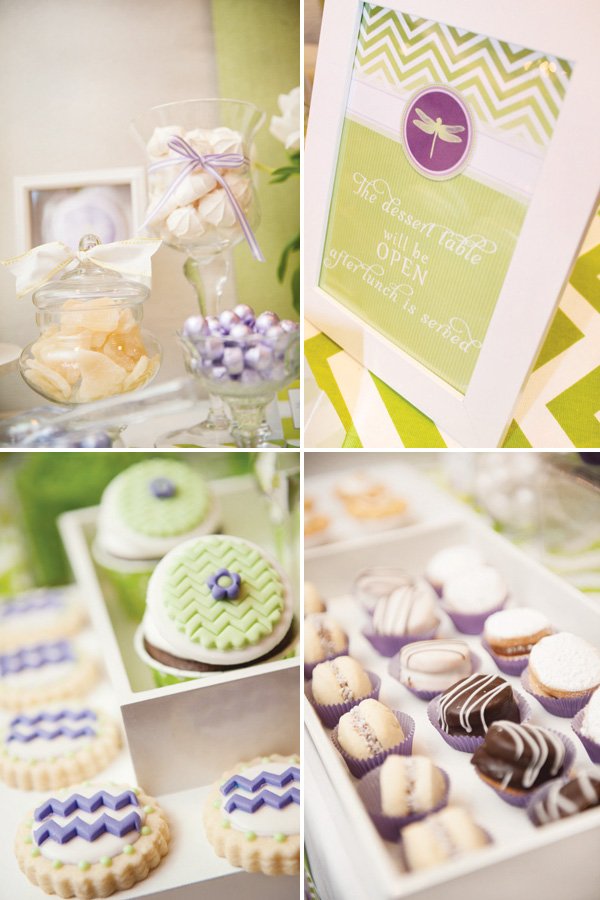 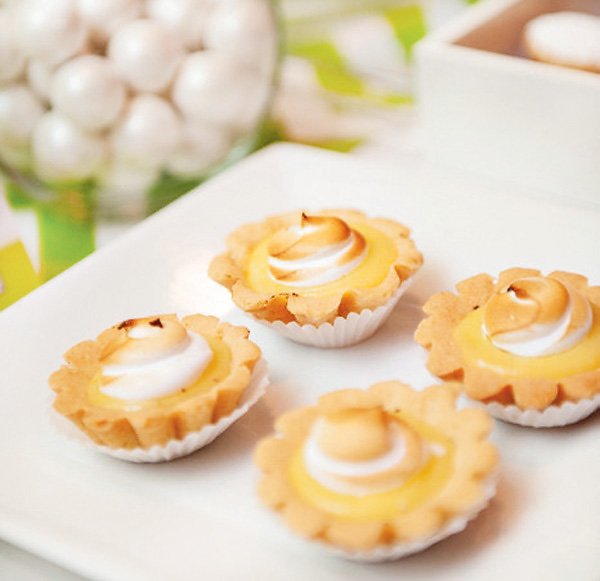 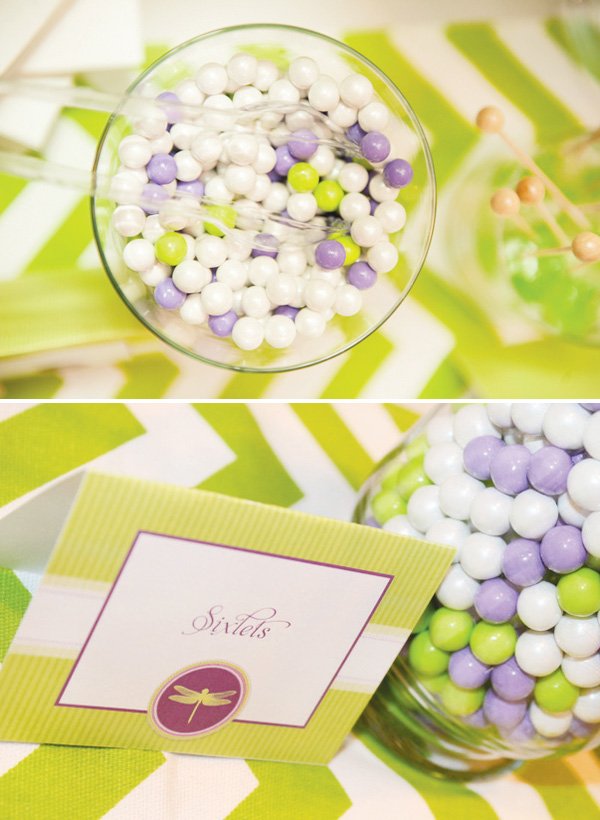 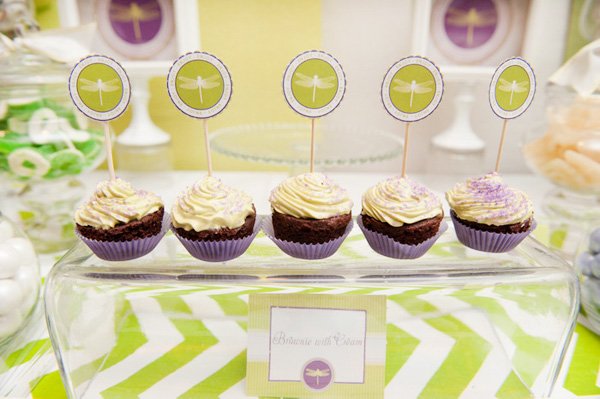 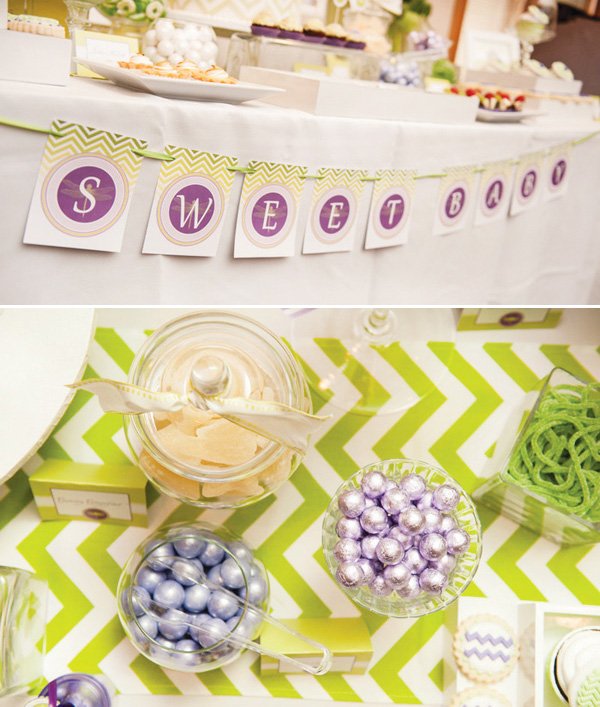 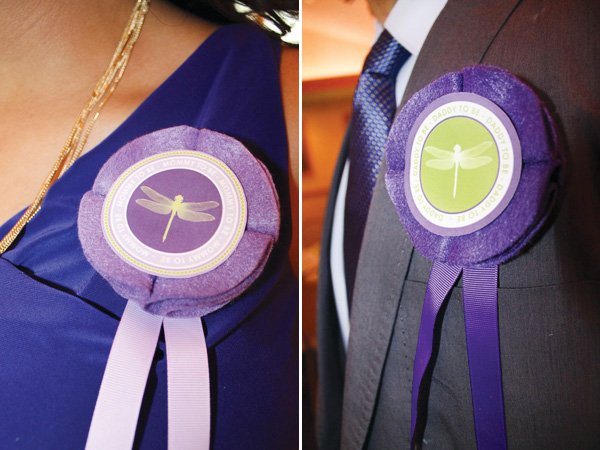 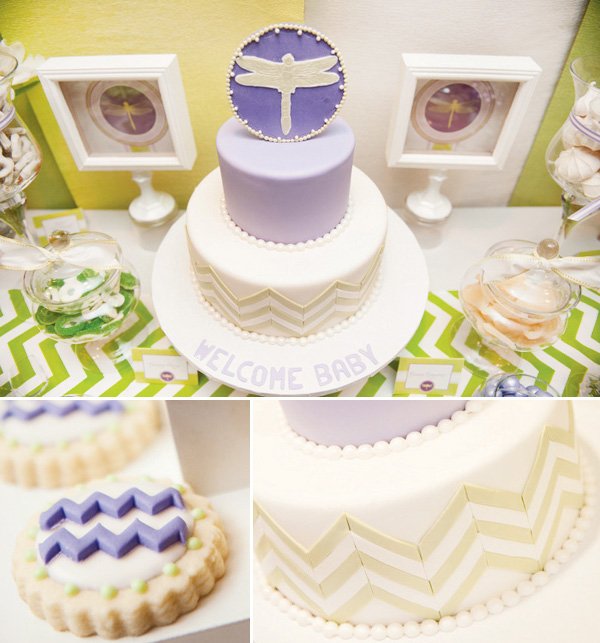 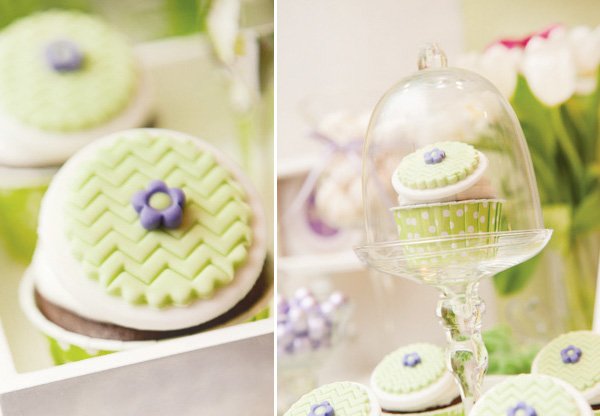 PARTY DETAILS, as told by Sarah…

This was a coed baby shower designed for my sister and brother-in-law who are expecting their first child, a baby girl in May. Dragonfly was the chosen theme, which was perfect…

In my research, I found out that in some parts of the world dragonflies symbolize change, self realization, maturity and a deeper understanding of life. I had also done a Gender Reveal party for them in which we used different tones of green, white and tan, so we decided to keep the green/white palette and then added purple to make it fun and girlie. We also incorporated the use of the Ombre Chevron pattern from the invitations, to the printables (both designed by my friend Wendy of Green Beansie Ink), table-runners and treat bags. The style of this party was kept fresh, modern and delicate enough for someone celebrating a girl’s baby shower.

I really hadn’t seen much done with this theme so I contacted Wendy Oliver of Green Beansie Ink, to help me bring this theme to life by designing the invitations and printables in using the green ombre chevron pattern, a single dragonfly and pair it with two shades of purple. These were the same colors used throughout the baby shower. Arlene St. Hilaire of Sweets by Arlene, designed the adorable chevron sugar cookies and cupcake toppers which everyone really enjoyed. The fondant cake which was designed by Dulce de Leche Bakery had a nice shimmery finish and was topped with a delicate green dragonfly, which perfectly matched the style we were going for. All of the lovely photos were captured by Chanu Kim of CIK Studios. (Some photos taken by me were contributed)


The table was dressed in white linen with the modern chevron table-runner over it and a banner that read “Sweet Baby” in the front. We served assorted candies including gumballs, sixlets, chocolate covered pretzels, meringue, vanilla and chocolate cupcakes, brownies with cream, Lemon meringue, raspberry+ kiwi chocolate cups, and sugar cookies. The cake took center stage. On each side of the cake I used two wooden hand painted shadow boxes which each held one dragonfly inside. I also added two perfectly tall arrangements to complete the look of the table. The arrangements consisted of white tulips and a single purple gerber.


We had 7 tables, all dressed in the white linen, chevron table-runners and mint green napkins. For each table setting we added either a cute small container with candy matching the themed colors or mini popcorn bags which were all adorned with a cute dragonfly label.

I made 3 fishbowl centerpieces for each table which consisted of white hydrangeas, roses, purple gerbers and lillygrass inside. The guests were allowed to take the centerpieces home which really put a big smile in a lot of those who did. ;)