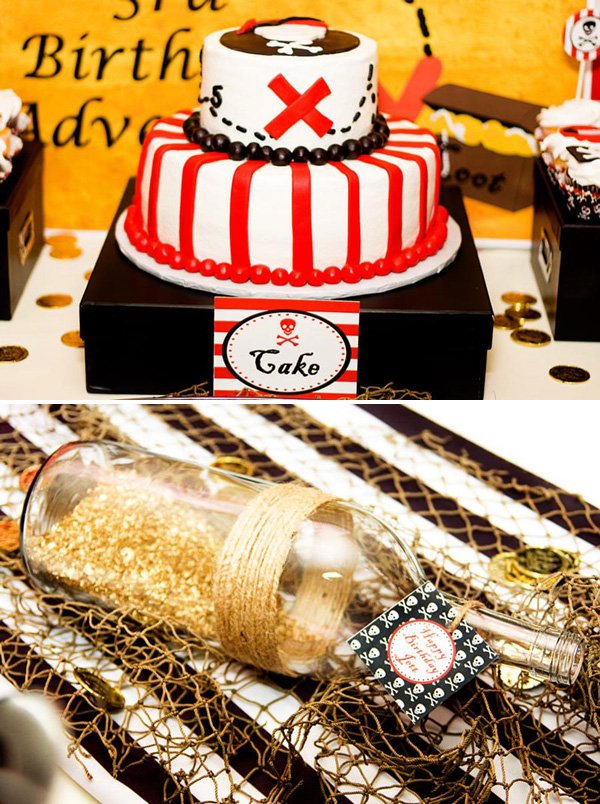 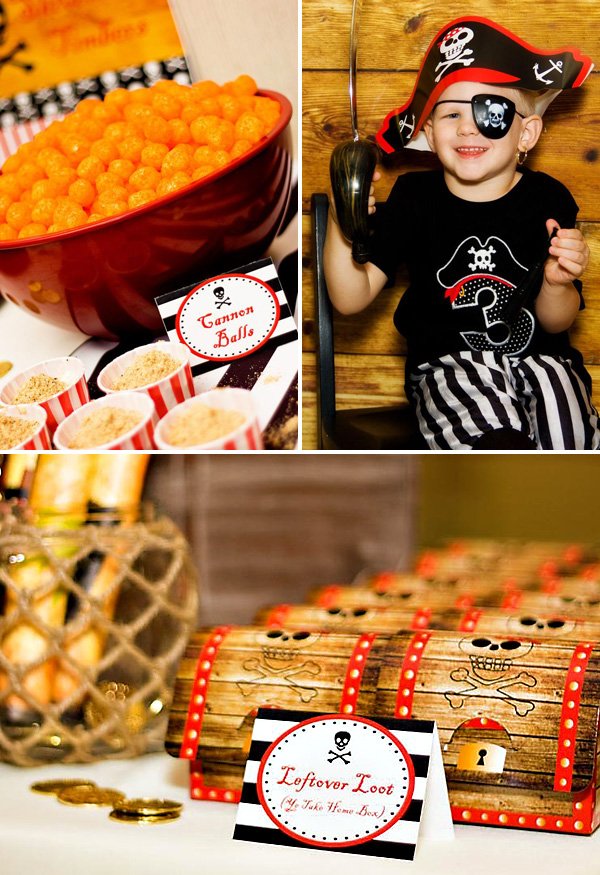 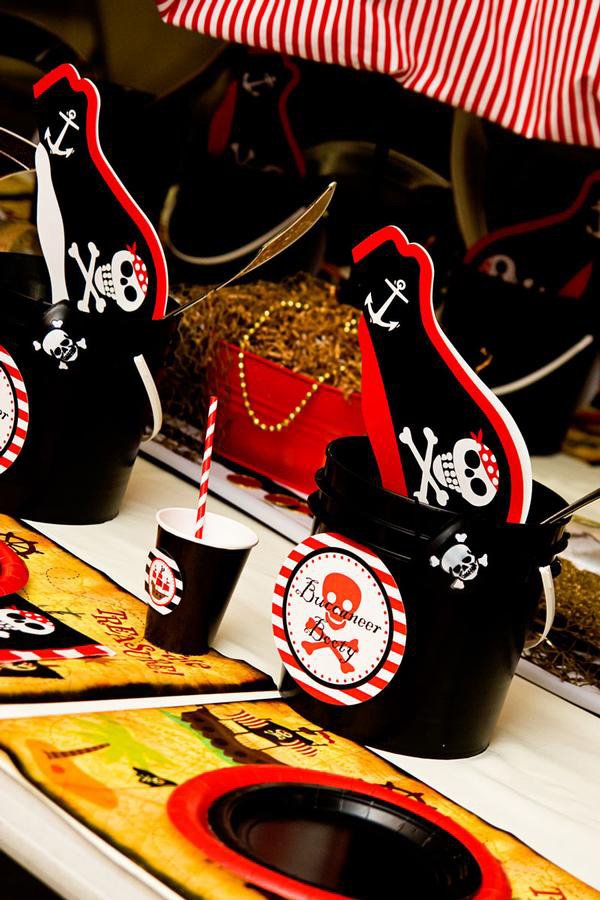 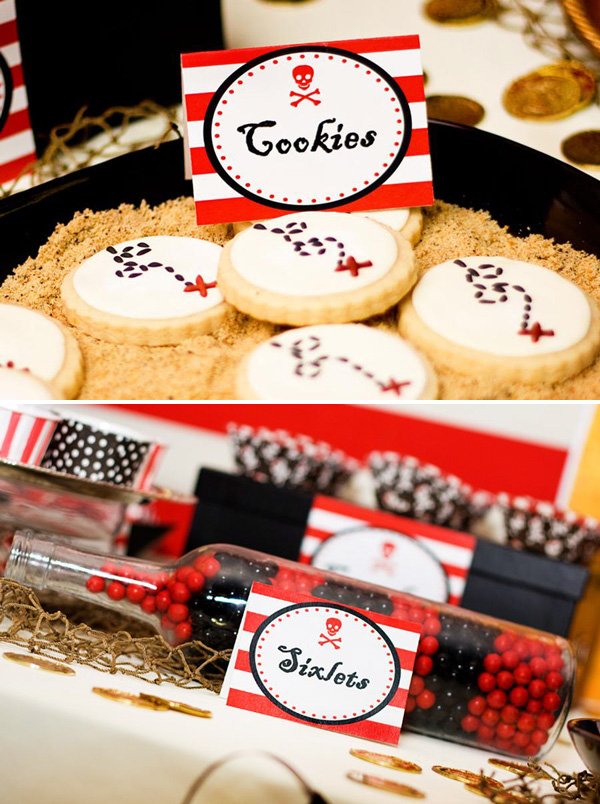 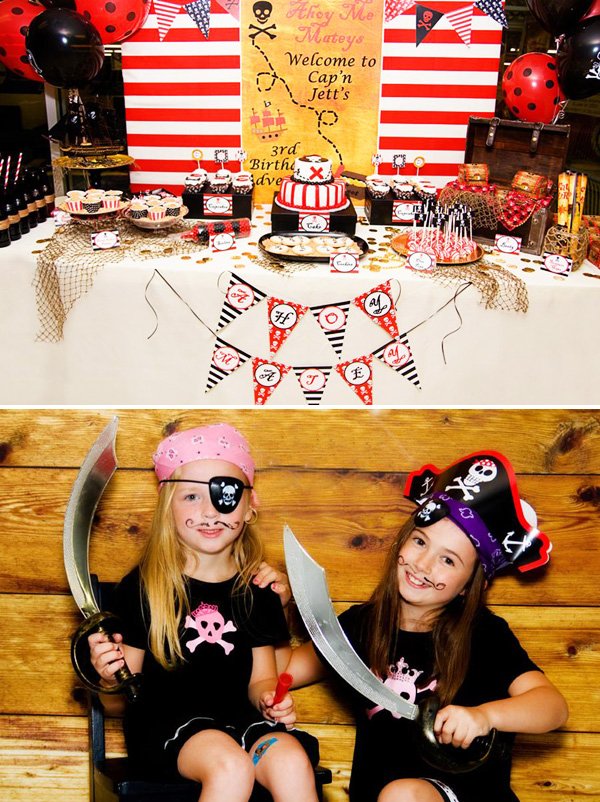 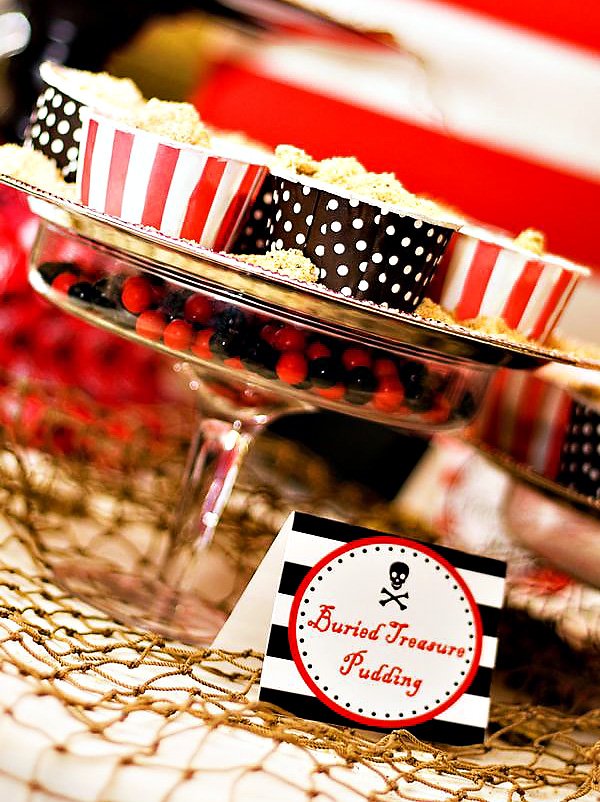 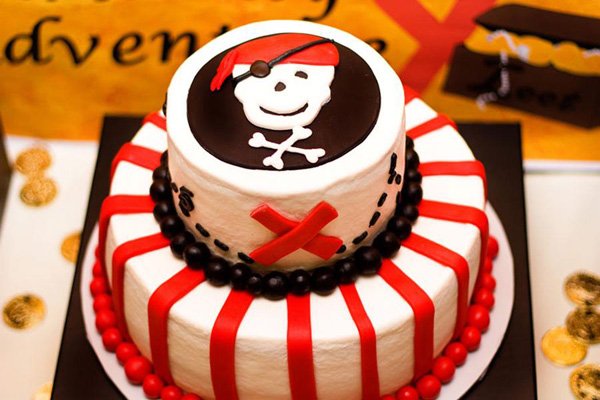 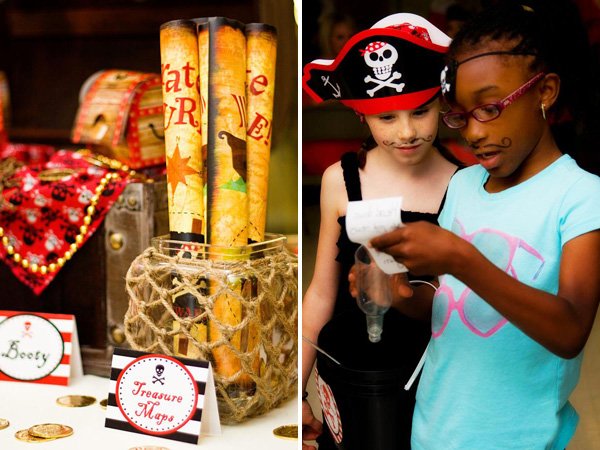 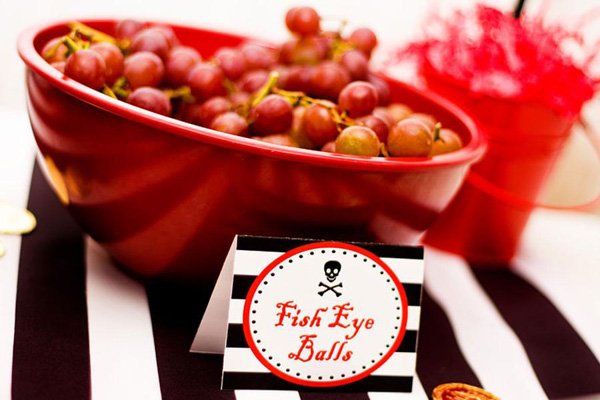 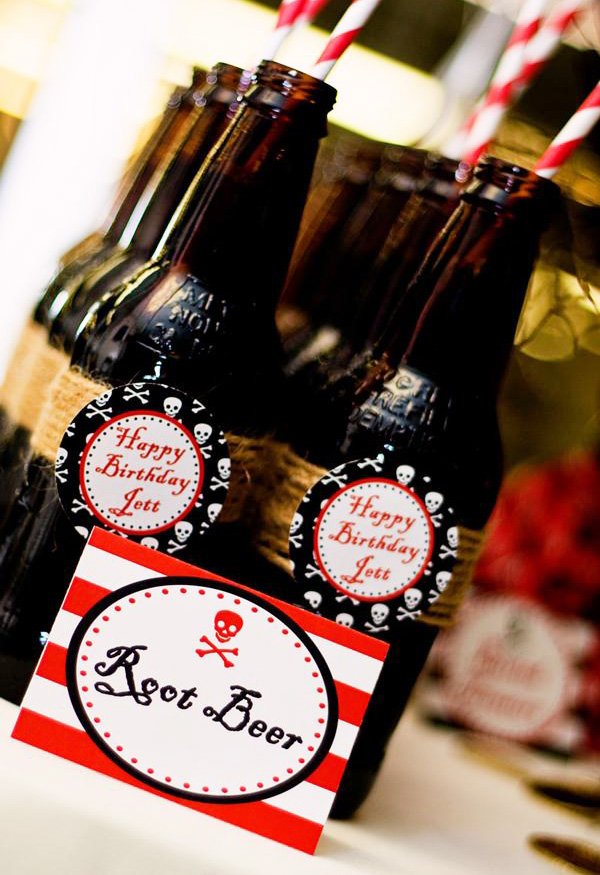 PARTY DETAILS, as told by Kara…


Ahoy Matey Argh you ready for a Pirate Adventure?!?! I made this Pirate Party for a sweet little boy, Jett for his 3rd Birthday Bash! Some of the activities during the party were: pirate dress up, photo booth, tattoo parlor, treasure hunt, plank walk, and more! Annye Newmann from Faith Photography did such a fantastic job capturing every little detail of this party!


The guest were invited with a message in a bottle style invitation. They were rolled up, tied with twine, and placed in a bottle filled with some sand. The bottles were purchased at Oriental Trading Company and the bottoms easily popped off to get things in and out.


Once the guest arrived they were given their pirate loot buckets full of fun pirate attire for them to put on and a sword for the treasure hunt I would take them on later. Once the kids were all dressed up they made their way to the Jolly Roger’s Tattoo Parlor where they received tattoo’s and a mustache! They then made their way to the photo booth to take some fun and goofy pictures.


After everyone was ready I took them on a treasure hunt that went from clue to clue leading them to walk a plank, swim through a shark pool, and fight off buccaneers. The last clue lead them to the x marks the spot where they found the buried treasure chest. Everyone then filled their buckets with loot. I wrote the clue on paper that I had torn and burnt to make it look like an old treasure map and placed inside message bottles with sand inside.

The last part of our Pirate Adventure Party was to eat all of the yummy sweet treats from the dessert table! Before the kids went home they were given a treasure chest goody box to fill with leftover sweets. Everyone went home with a ton of pirate attire, loot, and sweets!


I used two large foam boards from Hobby Lobby which I duct taped together and then wrapped in a red and white stripe outdoor fabric. The poster and all of the other paper goods came from my Printable Pirate Party collection. I made some of the small stands with Dollar Tree items. I used a treasure chest I purchased from Hobby Lobby to fill with Pirate Loot and goody boxes. The treasure maps were actually placemats I purchased at Hobby Lobby and place in a jar I found at Ross already decorated. I wrapped root beer bottles in twine, added a party logo, and paper straw from The Bakers Confections. The pirate ship is from Hobby Lobby and was paced on a cake stand made from Dollar Tree items. I used black photo boxes from Hobby Lobby to give some height throughout the table. For the seating table I made a sail out of large dowel rods, twine, hot glue, and fabric for the middle. Each place setting had a treasure map placemat to anchor the plates, cups, and pirate loot bucket (which was full of their pirate attire).  I placed a bunch of fish netting, pirate gold coins, and gold jewelry throughout the party; all of which was also purchased at Hobby Lobby.


The adorable cake was made by an amazing women, Jennifer. I showed her a cake inspiration I found on Pinterest and she replicated it perfectly! All of the fantastic cookies were made by my best friend Alyssa from Bonbon Du Jour. The Oreo pops were made by my friend, Lauren, they are always everyone’s favorite sweet to eat at any party I ever throw and are always gone in a flash! I purchased the cupcakes from Wal-Mart for cheap and then spice them up with the fondant toppers from blank and a few of them with cupcake toppers made from the party logos in the shop. I made edible sand by blending up Vanilla Wafers and Oreos. I placed the sand on several platters throughout the dessert table and used it to cover pudding in some adorable baking nut cups from The Bakers Confections.