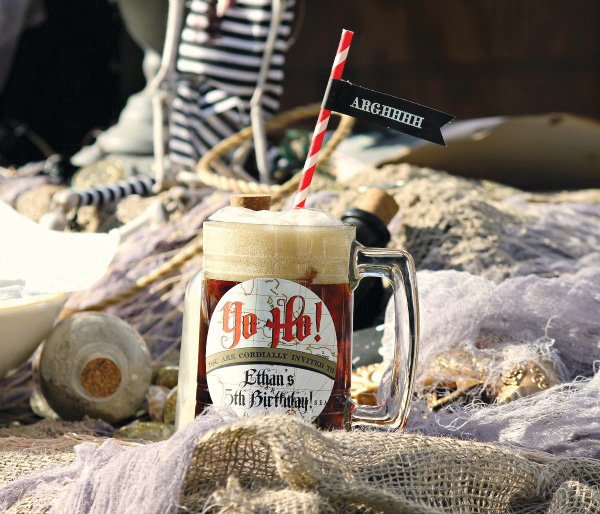 Event stylist & paperie designer Loralee Lewis definitely has a knack for bringing magical stories to life in {truly amazing!} party form, and this PIRATES OF THE CARIBBEAN birthday party that she created for her son is another shining example. In the party details below, Loralee talks about the important role that adventure and heroism plays in a young boy’s life, and how – with this party – she “…wanted [Ethan] to be transported into a land of adventure where he and his little friends couldn’t be anything but five year old heroes.” Mission accomplished!

From rummaging through Davy Jones’ locker for playful pirate disguises to hunting for buried treasure and tossing water balloon “canon balls”, this birthday celebration has ADVENTURE written all over it (in ye ole blackletter fonts, of course!). Ready to jump on board the recap? Here we go! 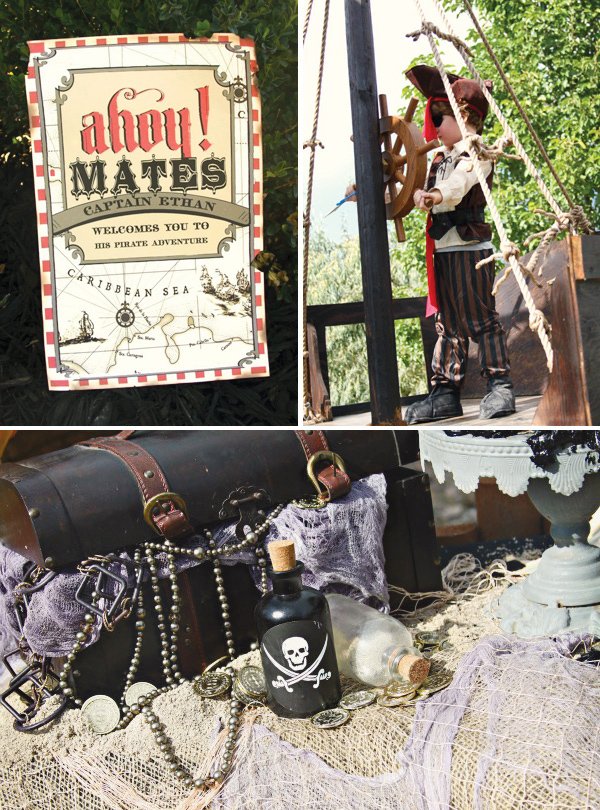 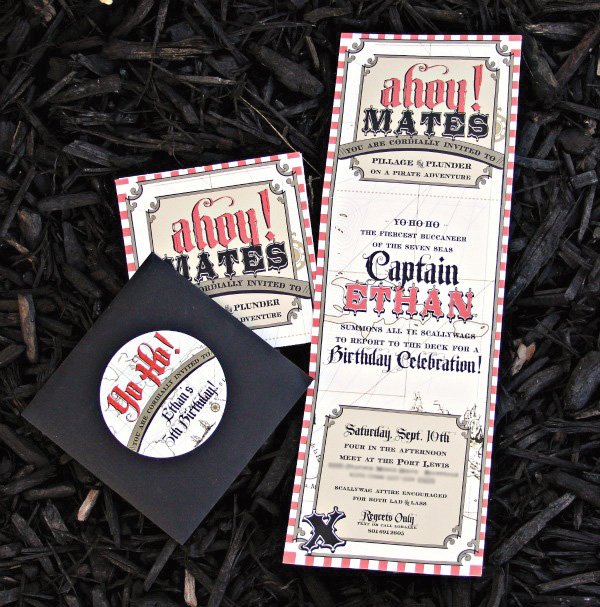 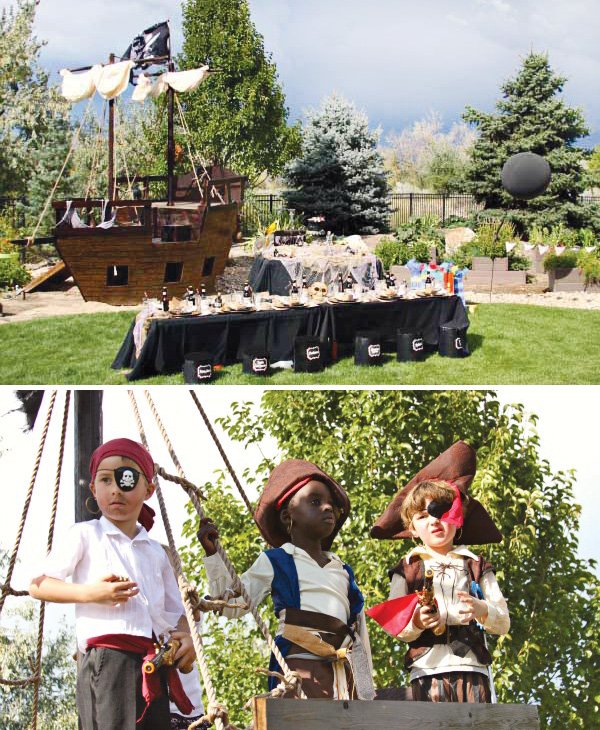 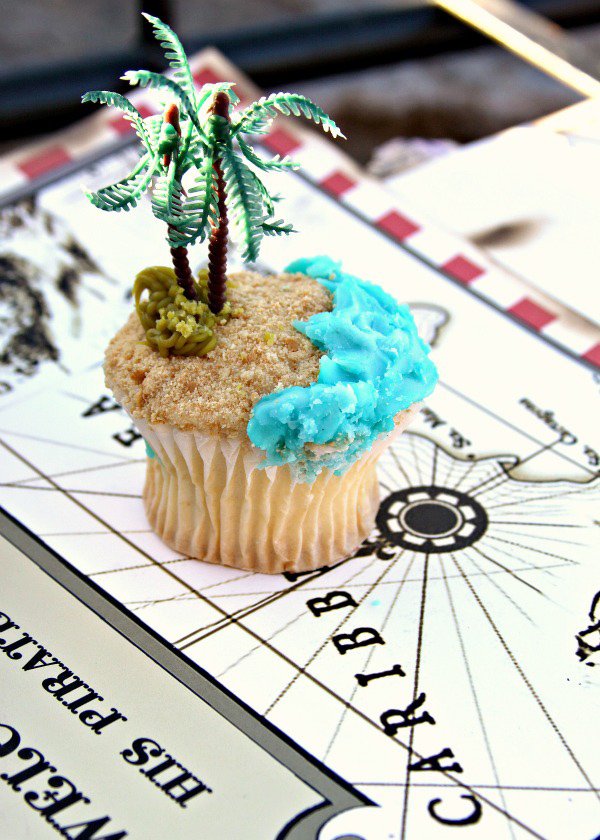 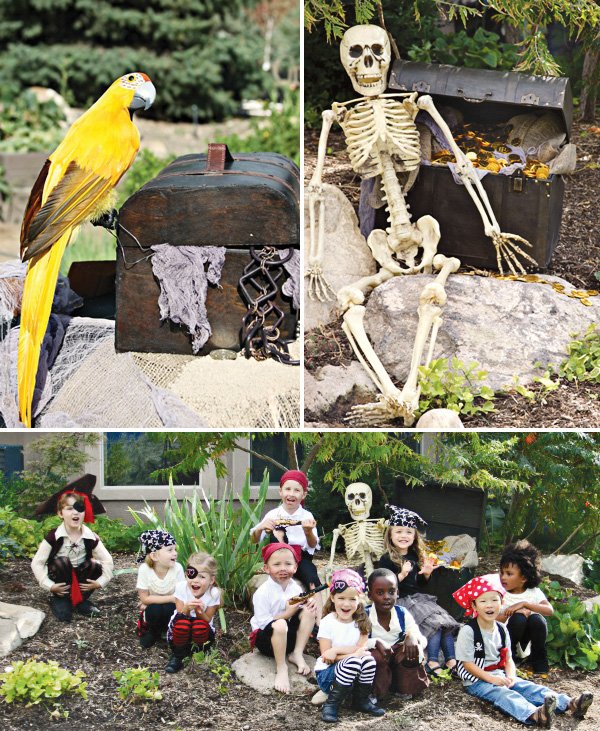 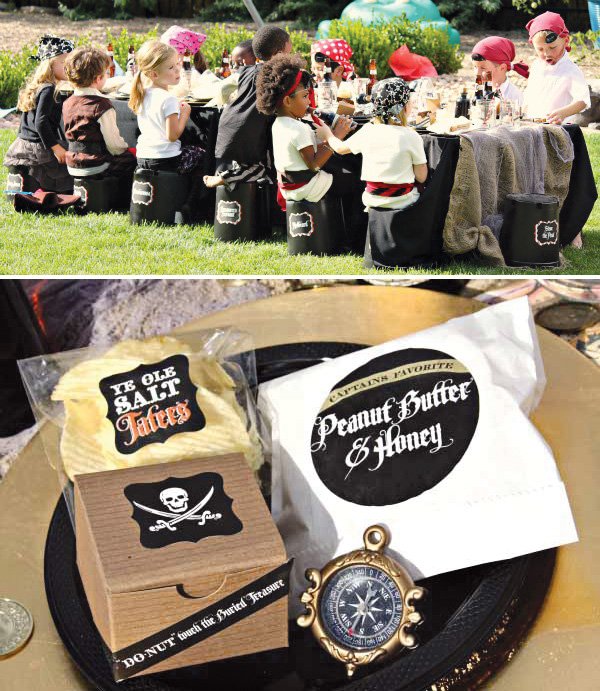 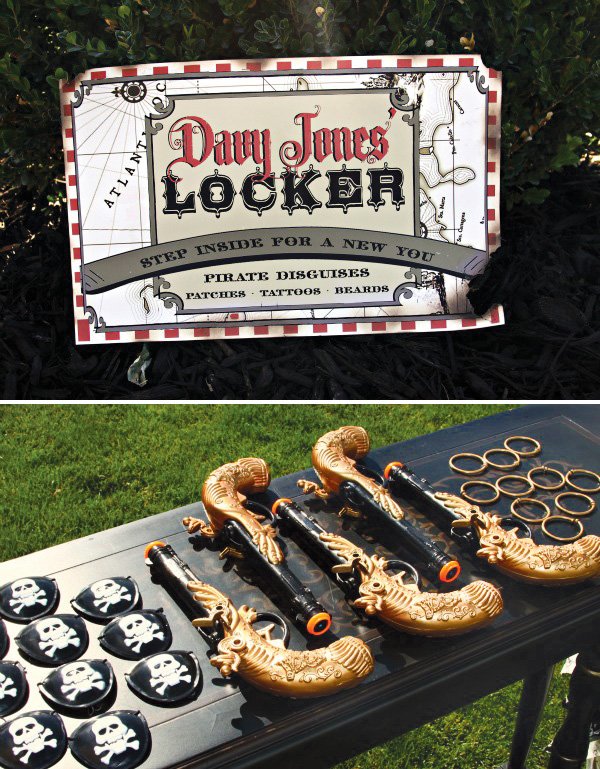 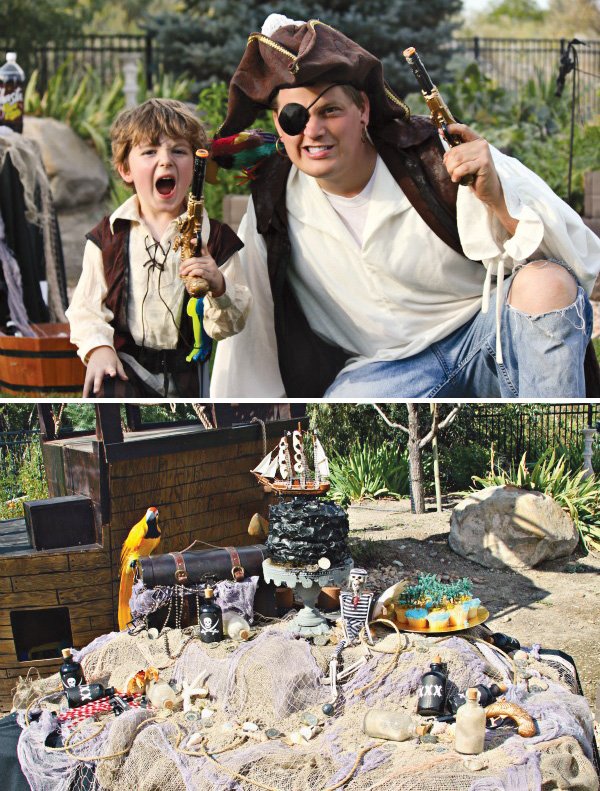 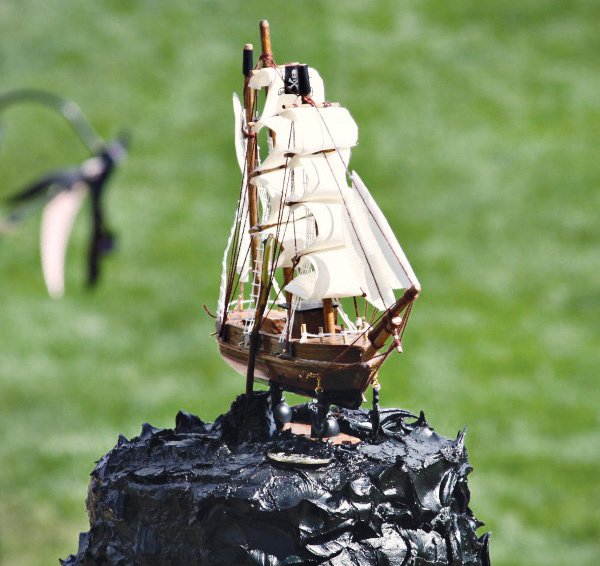 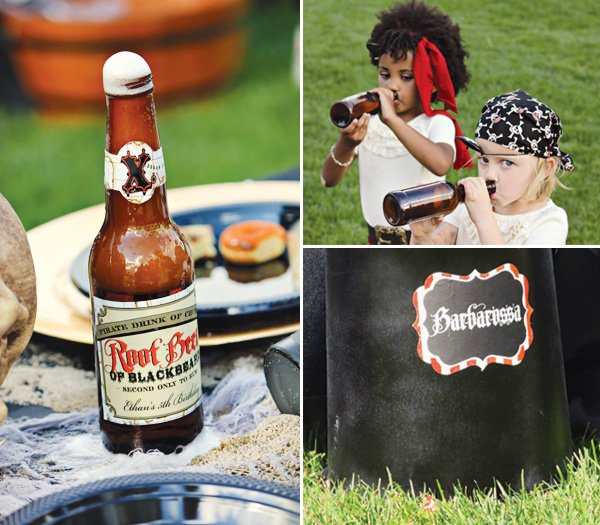 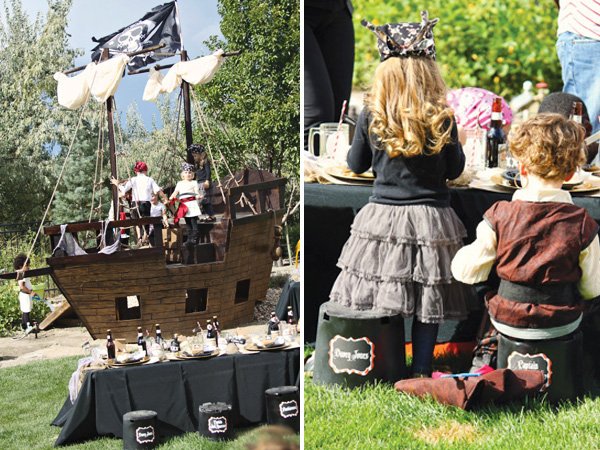 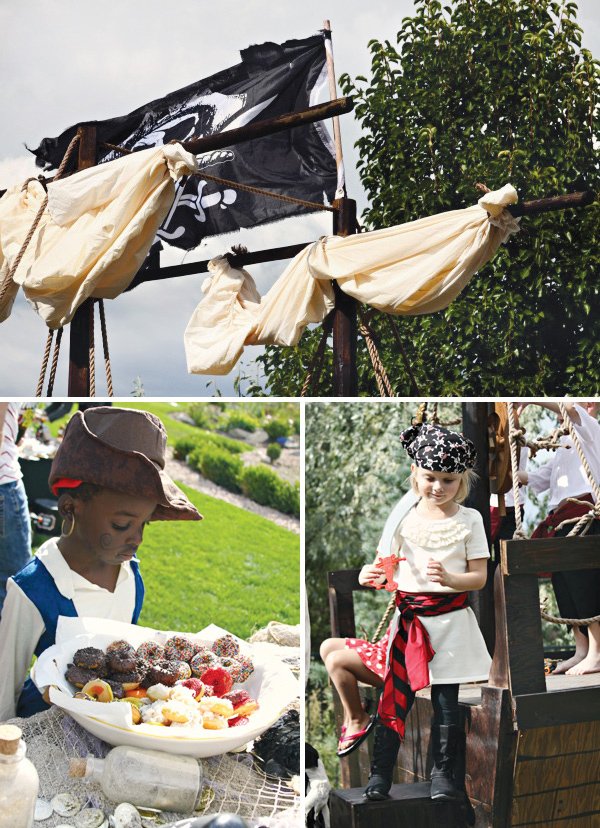 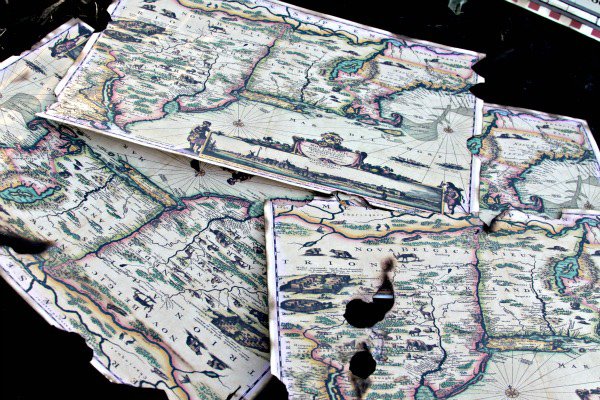 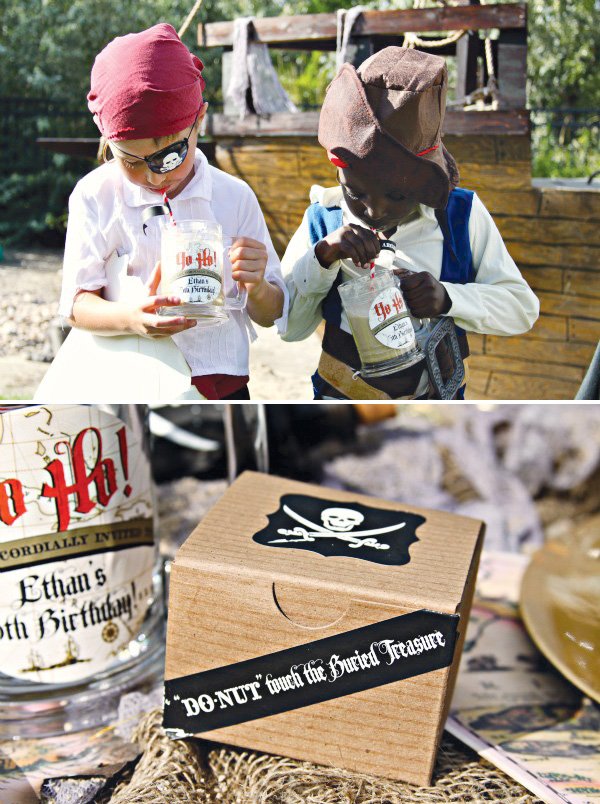 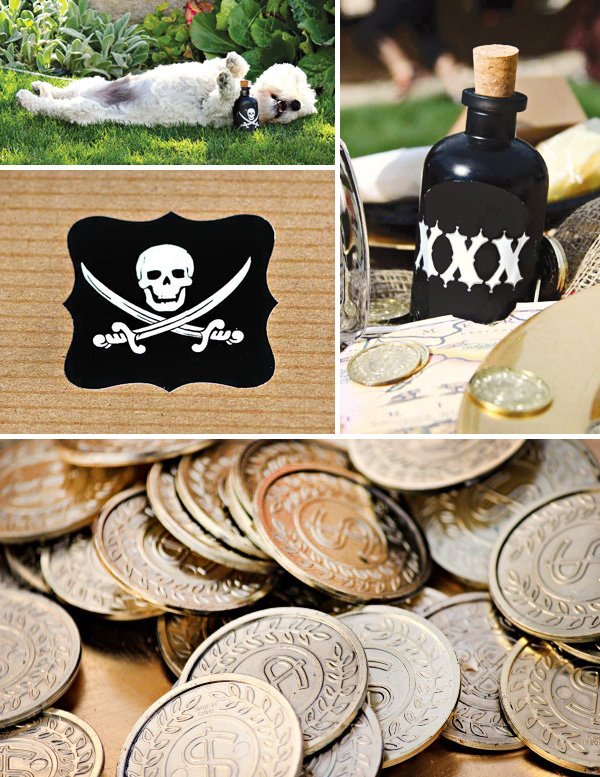 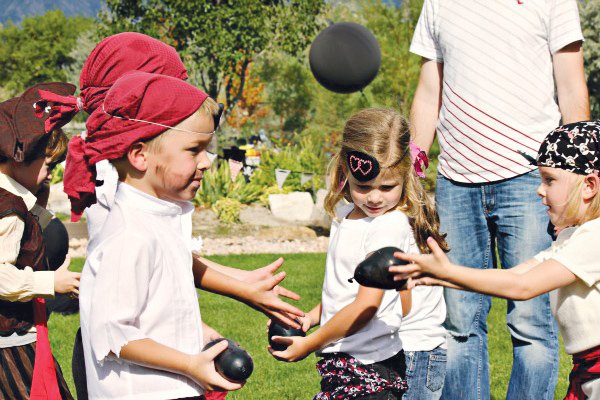 PARTY DETAILS, as told by Loralee…

A few weeks back, we held my dear Ethan’s 5th Birthday party. We waited for the school year to begin, in order for all Ethan’s swashbuckling scallywags to attend. Since he had waited all summer, I knew we had to have a pirate party to remember. I’ll be honest, five years ago when I found out for sure that my first little child would be a boy – I worried endlessly about becoming a mother of the male species. I came from a family of all girls and I love sparkles and shopping more than most people love their own children. The whole G.I. Joe and Transformers bit scared me. I didn’t know if I could tap into the little boy psych. But now two little boys, one princess, and a lot of prayer later – I do understand one key to raising little boys…or at least a small portion of it. Give your little boys adventure and make them your hero. When my little boys feel like heroes and are knee-deep in adventure – that’s when they are the most content and I can’t wipe the smile off their faces. That’s what I tried to do for Ethan’s birthday. I wanted him to be transported into a land of adventure where he and his little friends couldn’t be anything but five year old heroes.

DISGUISES
I created a “Davy Jones’ Locker” area where all the kids could step in to become a true pirate! We had pirate scarves, fake tattoos, eye patches, pirate (water) pistols, and gold earrings.  I also drew fake mustaches and beards on all the kids with black eyeliner pencils. The kids loved getting all decked out for the party!

PIRATE SHIP & PLACEMATS
The magnificent imagineer and owner of Rhino Design Lab, John Christensen,  designed, created, and built Ethan’s Pirate Ship Playhouse!  He does a ton of work for me  and my parties and I am never happier than when working with him.

For placemats, I created 11X17 antiqued maps for each setting.  The kids then used these to find the hidden treasure!  I “forced” Mr. Lewis get out a blow torch and antique all the signs, placemats, and posters.

FOOD & DRINKS
I am huge fan of pre-prepared servings at children’s parties.  For Ethan’s lunch I served his favorite, Peanut Butter and Honey sandwiches in prepackaged white bags with a label.  Along with Root Beer with personalized labels, potato chips with little stickers on them saying “Ye Ole Salted Taters” and a mini treasure box of tiny donuts with a little tag that said ” ‘Do-nut’ eat the buried treasure.” My best friend forever, Alison Daines, made all the tiny mini doughnuts for the buccaneer’s lunch. A special thank you to her! Having a place setting for each child made lunch simple – which I love.  The banquet table was made from two other tables stacked end-to-end and lowered to preschooler height.  We sat them all on “barrels” (black potting plant buckets) labeled with famous pirate names.  For dessert, we had root beer floats for all the kids. The buccaneers looked adorable toting around their huge mugs with root beer mustaches saying “Arrrgh!!”  I now highly recommend root beer floats for every pirate party!

GAMES
Of course, we had a treasure hunt! A must at all pirate parties. I also purchased round black water balloons and the kids loved playing toss the canon ball.  This was fun because they didn’t get soaking wet in the early-fall weather, but still got a little splash which they enjoyed. My brother-in-law dressed up like a pirate and basically stole the show with the kids.  They played “Tug-a-war with the Pirate” using a huge long hemp rope and also played “Follow The Pirate”.  Very few children left without a photo with “Captain No Beard.”