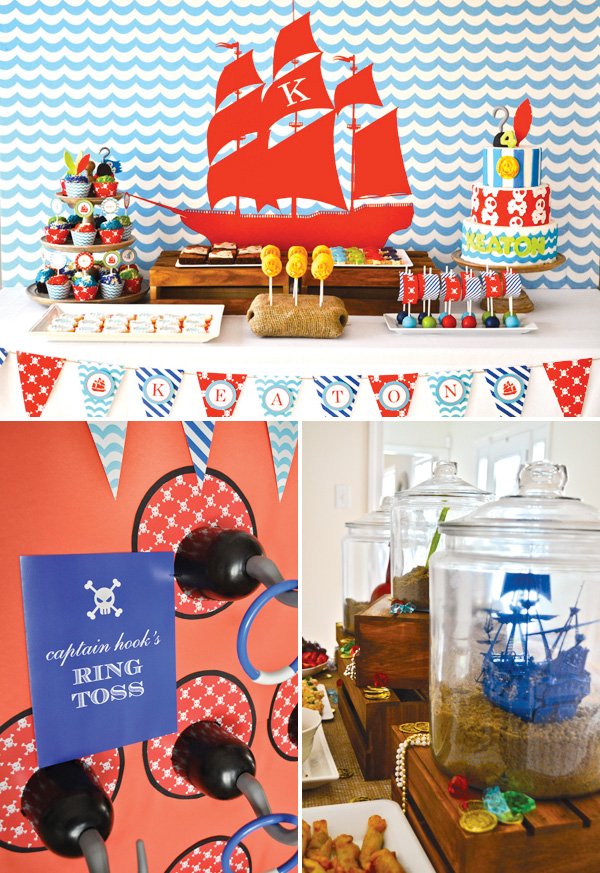 It’s a pirate’s life for me… at least if it looks like THIS that is! ;) Fondant queen Charynn of Two Sugar Babies and party guru Kelly from The Party Dress teamed up to create this fabulous Preppy Neverland Pirate Party for Charynn’s son, who requested a Jake and the Neverland Pirates theme for his birthday. The contemporary skull-and-crossbone and “wavy stripe” patterns were such a great choice for this modern spin on pirate parties! 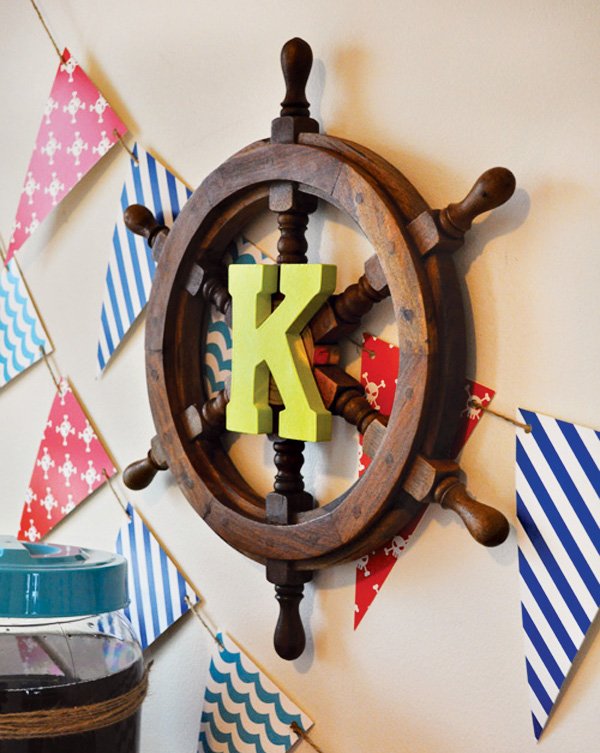 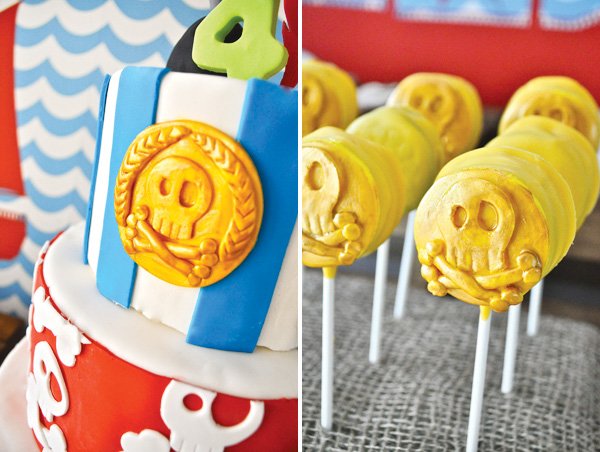 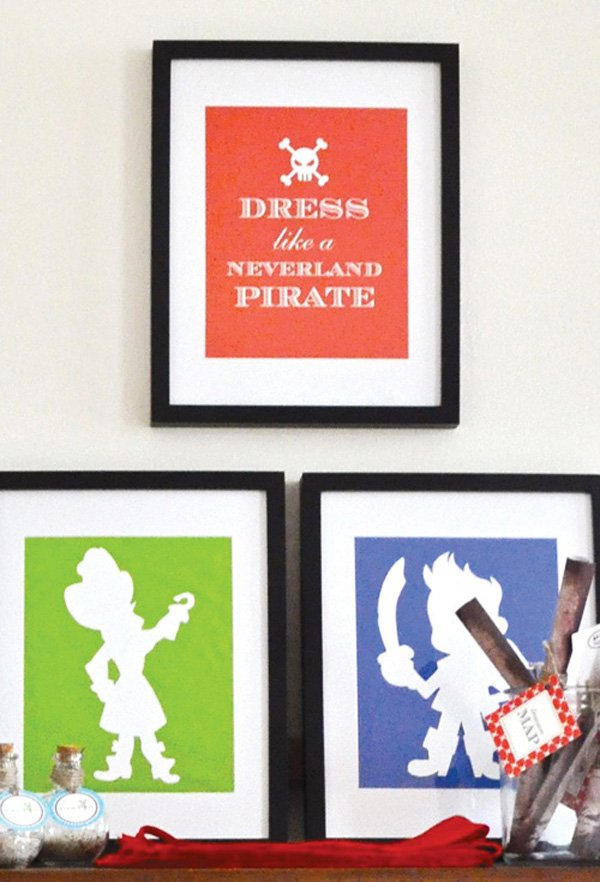 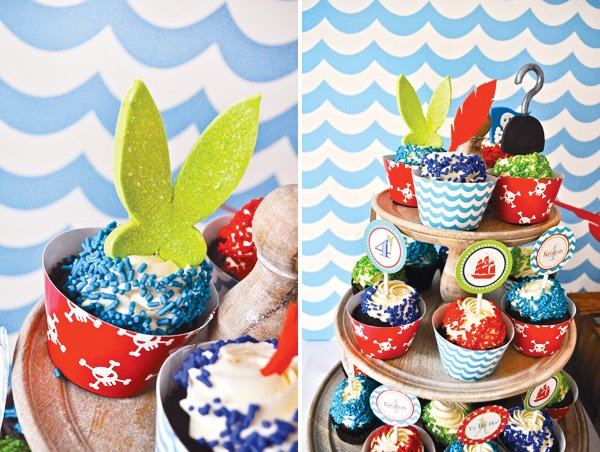 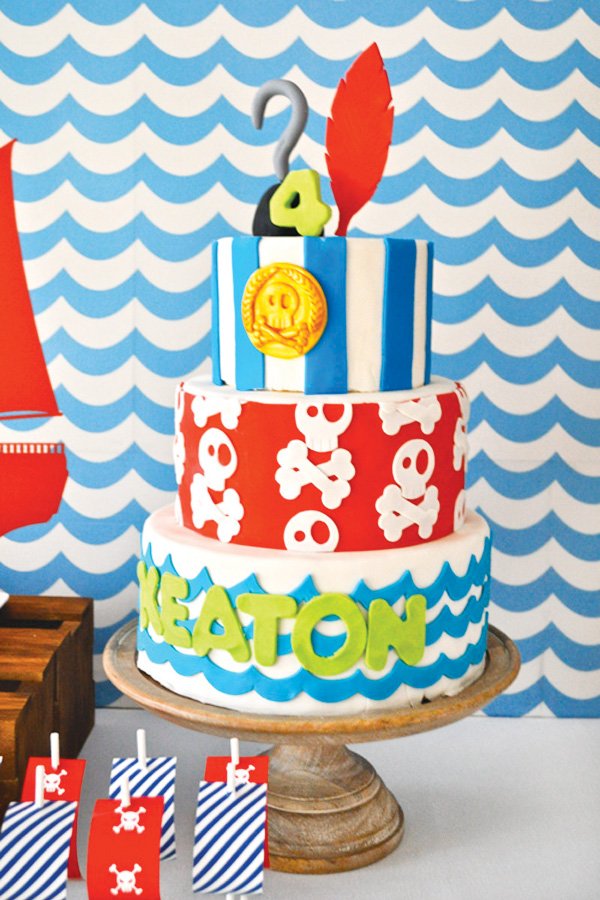 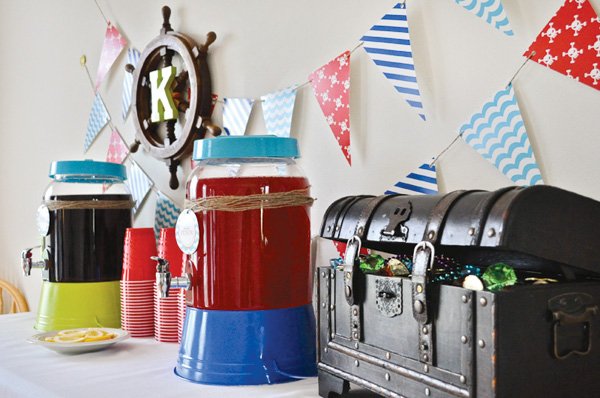 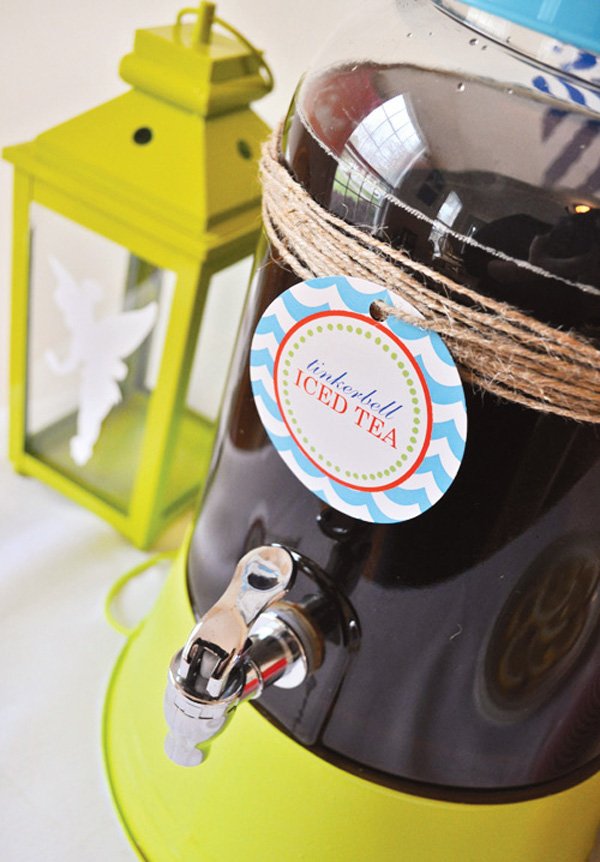 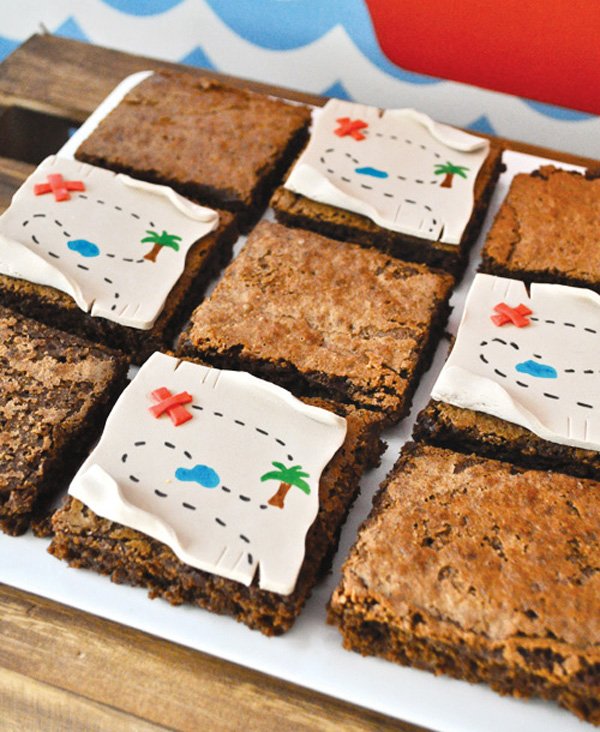 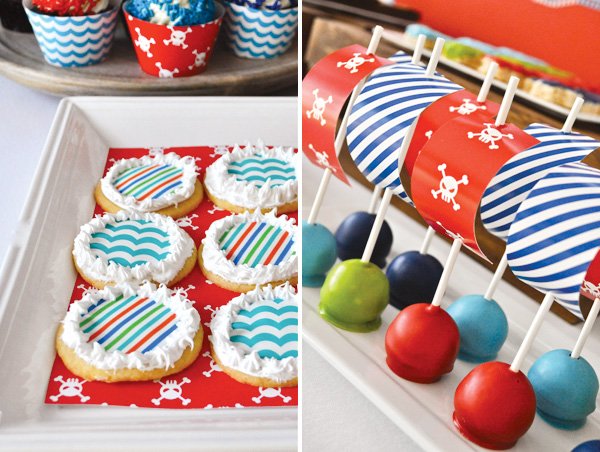 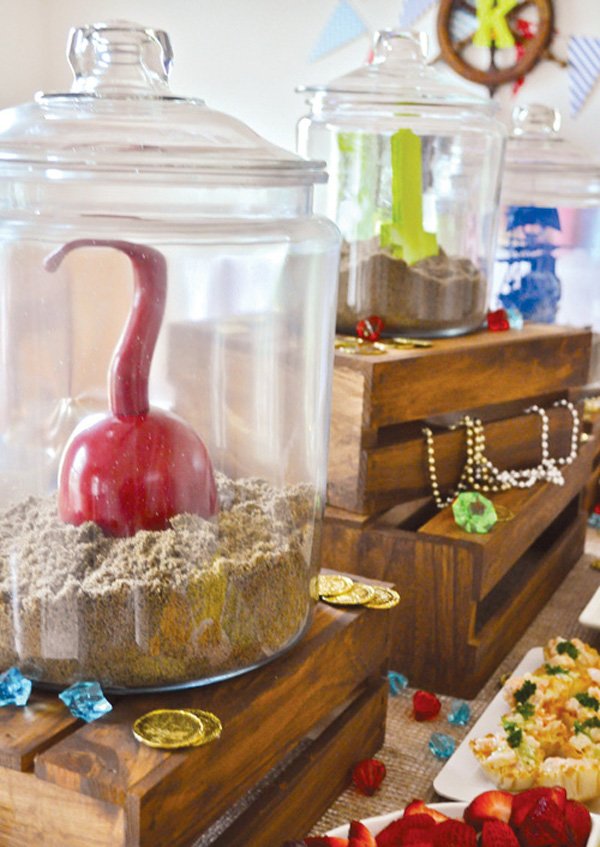 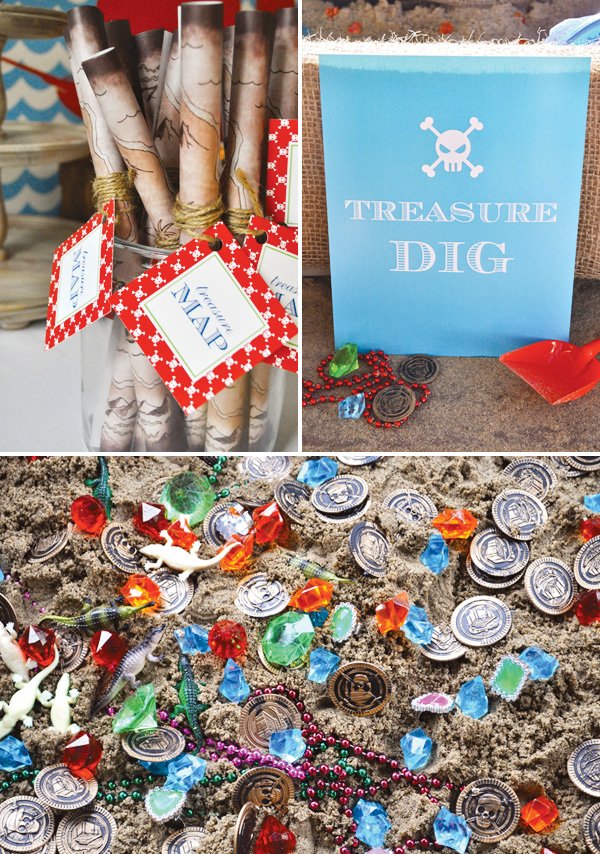 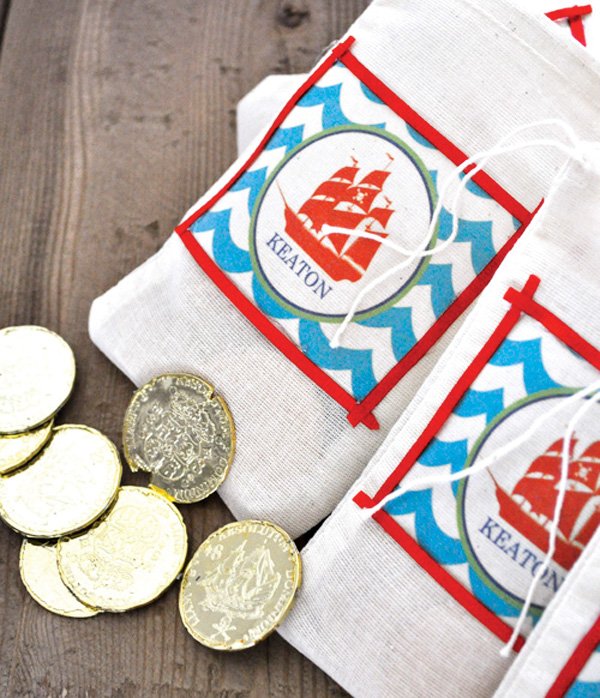 This is Charynn, owner of  Two Sugar Babies, and Assistant Editor of The Party Dress Magazine. I am excited for you to finally see my son’s birthday party! In keeping with the tradition at my house (my kids NEVER pick a birthday theme that is easy to find accessories for), Keaton chose “Jake and the Neverland Pirates.” I used to think that them picking a “hard” theme, but now I realize that it’s the best kind of party to have! Kelly of The Party Dress and WHHostess assisted me in planning this party and I think we stayed true to our theme of throwing a stylized character party. We carried a modern pirate theme throughout the party, using graphic patterns of aqua blue waves, red and white skull and bones, blue and white stripes (from Jake’s ship sail) and also a red pirate ship silhouette. Then we added elements of Neverland with pirate hooks (Captain Hook is Keaton’s favorite character), red feathers, and a couple of character silhouettes.

We came up with a few distinct displays for the party: the dessert table, a buffet table centerpiece, a drink table, and a Kid’s area, including a Neverland Pirates dress-up station, games and personalized favors.


For the dessert table, Kelly had a custom piece of fabric made to use as the backdrop featuring the aqua wave pattern and the pirate ship. She also made personalized cupcake toppers, coordinating cupcake wrappers and “sails” for the cake pops. I updated cupcakes from our favorite bakery with sprinkles to match the party, and added character elements by making fondant Tinkerbell wings, a red feather, a pirate hook, and a pirate flag. I also created edible image cookie toppers in the party patterns, fondant treasure maps for brownies, and fondant gold doubloons to cover the front of chocolate covered oreos. One of my favorite elements of the party was the 3 tier cake I created using the patterns from the party, and red feather and pirate hook cake toppers, which I personalized with Keaton’s name and a “4”.


For the buffet table centerpiece, I originally wanted to use “ship in a bottle” pieces in some way, but Kelly and I came up with a modern interpretation: I spray painted a toy ship, pirate hook and a green Peter Pan sword solid, bold colors and placed them inside large jars with sand on the bottom. I stacked them on custom stained wooden boxes and scattered bright jewels, gold doubloons, pearls, and necklaces to complete the pirate ship look and feel. The drink table backdrop was also one of my favorite elements. I made banners using twine and WHHostess patterned papers, and added a lime green “K” to a pirate ship wheel as the focal point. It’s something Keaton can use in his bedroom! I displayed “Tinkerbell Iced Tea” and “Pirate Punch” in large drink dispensers, and filled a pirate chest with loads of “treasure” to finish the display.


The Kid’s Area was the highlight of the party. I used character silhouettes I made and a custom “Dress like a Neverland Pirate” sign made by Kelly to frame the dress up area, where the kids used to pirate hooks, eye patches, pirate hats, red sashes, compasses, toy telescopes and treasure maps to transform themselves into Neverland Pirates and go on a treasure hunt. I also built two different games to entertain the kids: a treasure dig sandbox and Captain Hook’s ring toss. The kids were sent home with personalized gift bags filled with gold doubloons, small bottles filled with pixie dust, Neverland Pirates coloring pages, and the costume pieces in white gift bags with personalized “Thank You” stickers.