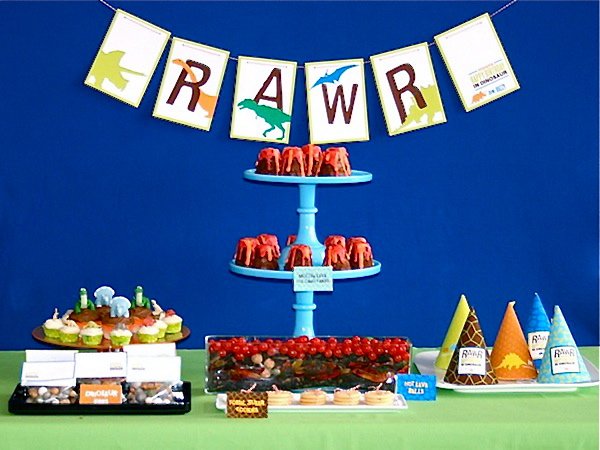 Dinosaurs extinct? Not in this fabulous feature! I am pretty positive that any kiddo that attended THIS party {by Debbie of Wants and Wishes Design} had a RAWR-ing good time.  The color scheme?…Fun & Fresh!   The treats?…perfectly themed to draw you into the land where these dynamic creatures are alive and partying!

This pre-historic party was complete with mini-molten volcano cakes exploding with deliciousness, decorative party hats came to life with dino-spikes and guest “archeologists” (kids) were sent off on a hunt for dinosaur eggs! 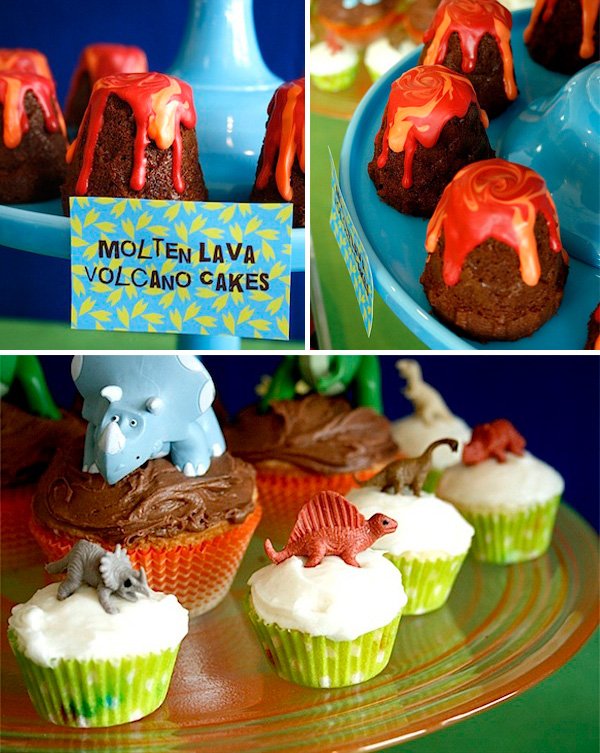 Read on for more festive pics of this RAWR-ing fun party! 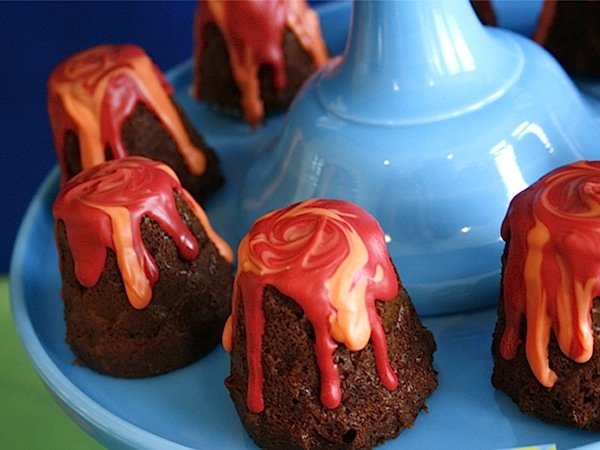 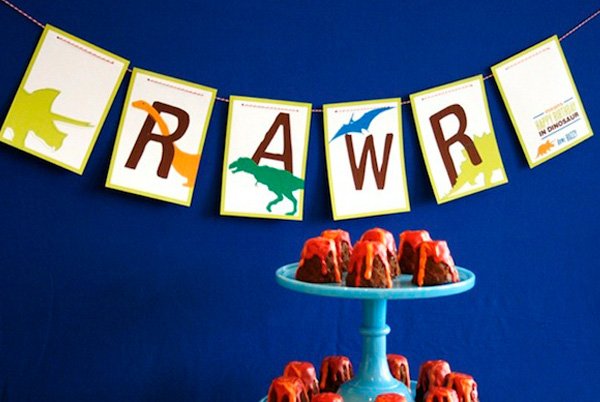 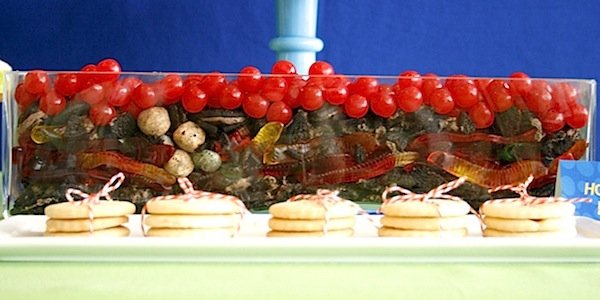 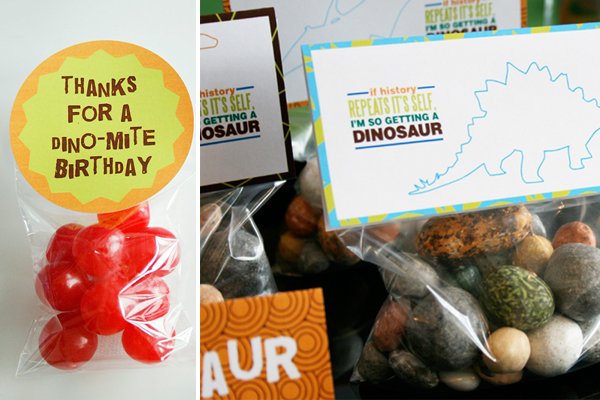 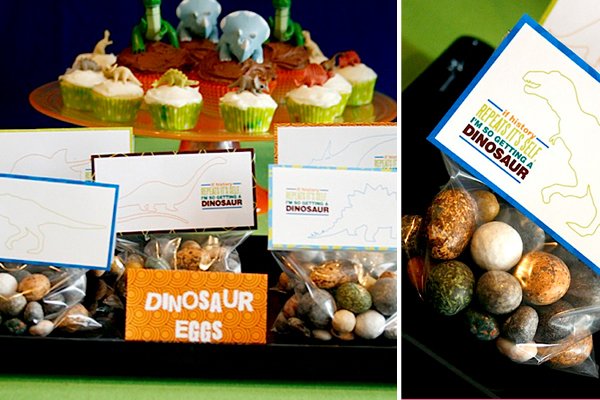 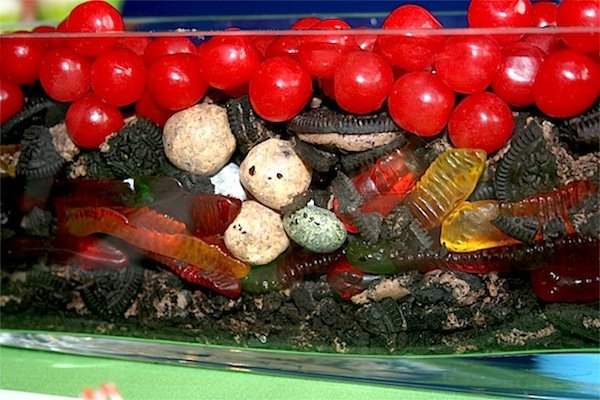 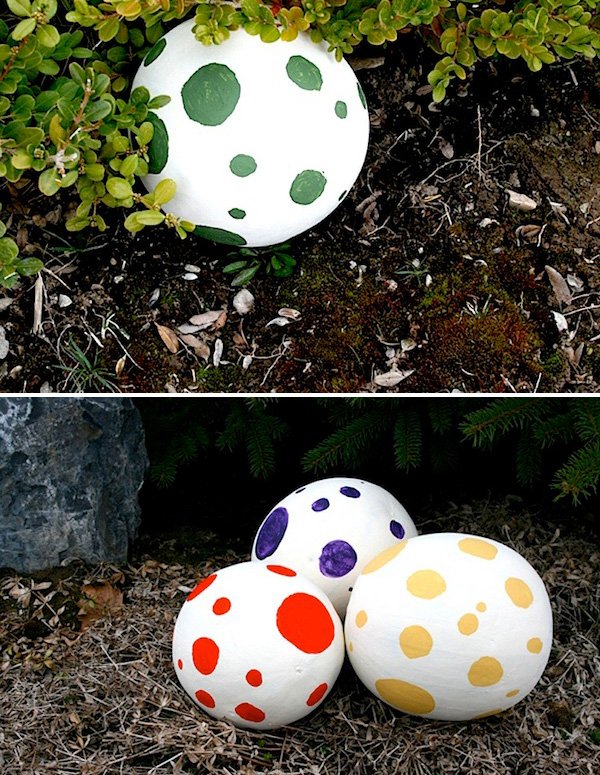 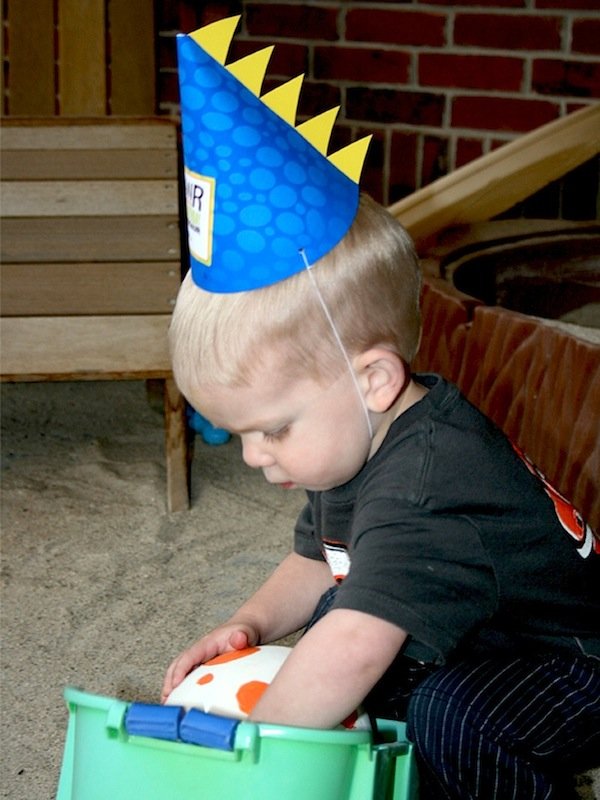 We had a lot of fun & exciting desserts. I made exploding molten lava volcano cakes as individual treats for each of the guests. These were a huge hit and so easy to make! (Step by step directions & recipe are also available on my blog.)  The other desserts we had were cupcakes topped with dinosaur toys that they could play with, dinosaur fossil sugar cookies, a hot lava trifle {which is layered crushed chocolate filling Oreos, gummy worms, a small cluster of chocolate dinosaur eggs, crushed Oreos and cherry balls for the lava balls}, and if history repeats itself, I’m so getting a dinosaur’ favor topper with chocolate dinosaur eggs!

Another big hit were my dinosaur party hats with spikes down the back. We had a wide range of ages and all the kids loved wearing them. Some even took their dinosaur party hats off while we had the dinosaur egg hunt because they didn’t want it to get ruined (it was a really windy day).

For the dinosaur egg hunt we transformed mini watermelons into dinosaur eggs and hid them around the backyard. Here’s the step-by-step tutorial. The small watermelons worked great because they are big and heavy, but not too heavy for the kids to carry around. Some of the guests took the dinosaur hunt very seriously and loved playing with their dinosaur eggs, carrying them all over and placing them in wagons and all kinds of containers! It was a fun little hunt and then we ate the watermelon as part of lunch.

We served dog-o-saurs (hot dogs), chips and watermelon (from their ‘dinosaur eggs’). The party was a huge success and all that attend had a roaring good time!”

About the Author: Rebecca

REBECCA PROPES, the creator of of Fresh Chick Design Studio, turned her love of details and girly things into a passion for parties. With a degree in interior design, Rebecca made a huge leap to leave the corporate world and explore entrepreneurship upon the arrival of her second baby. Needing an outlet to express her harbored design skills and creativity, she launched her blog and Etsy Shop in May of 2010. Opening up her shop gave her the opportunity to work from home and turn creative efforts towards designing party goods, art prints and much more. In her free time, she dreams up DIY design projects to be completed throughout her home where she resides in Gilbert, AZ with her husband and two – (soon to be three!) – boys. Rebecca’s fun, outgoing, contagious enthusiasm has helped make her business a success. She recently had her best friend join forces with her to help expand the ”Fresh Chick” brand. Rebecca is beyond thrilled to be joining a team of super talented contributors that grace the party world with such a recognized site as HWTM.