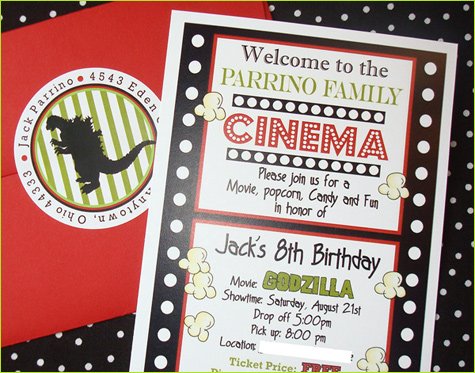 Lori from Little Beane Boutique sent over these photos from a Godzilla themed birthday party she recently thew for her son… how FUN is this?!

She created a “home movie theater” setting for the party and an AMAZING buffet of themed movie watching treats – from Godzilla Oreos and Popcorn Boxes to Atomic Fireballs and Pop Rocks! 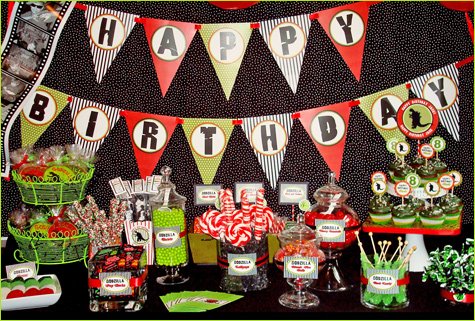 And because Lori couldn’t find any ready-made Godzilla party supplies, she made everything herself! (Want to order something similar? Visit her Etsy shop here.) 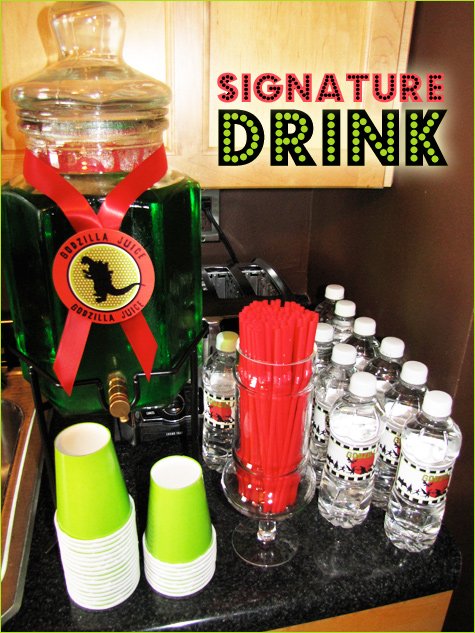 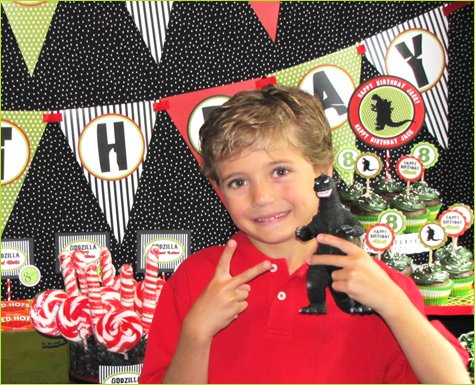 “My son was very adamant that he wanted a Godzilla theme for his birthday. And although I love planning parties, hearing the theme “Godzilla” nearly made my knees buckle as I thought… what in the world can I do with this theme?!

I searched the stores and internet for ideas, and quickly realized there was nothing to be found… no Godzilla decorations, no balloons, no plates, no napkins, no wrapping paper… NOTHING!!

SO… after some brainstorming, I came up with the idea of having a Godzilla Movie Night Birthday Party. We invited about 12 of his friends over to watch a Godzilla movie and I created a candy buffet full of fun treats for the movie…. the kids had such a blast! 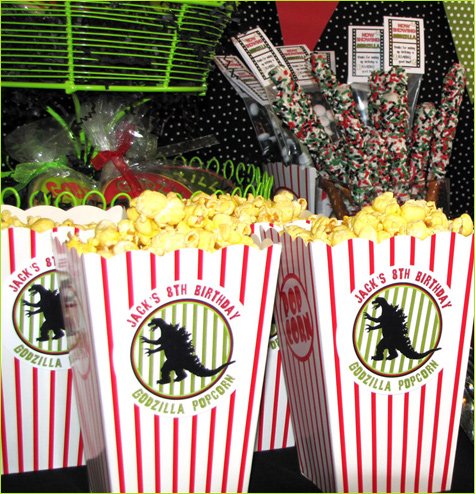 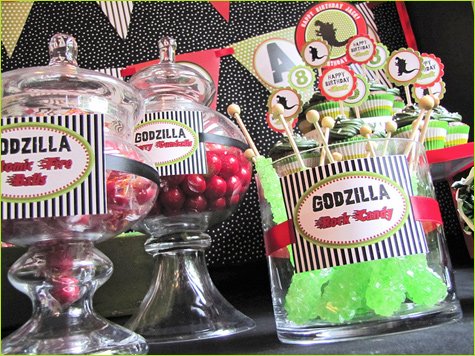 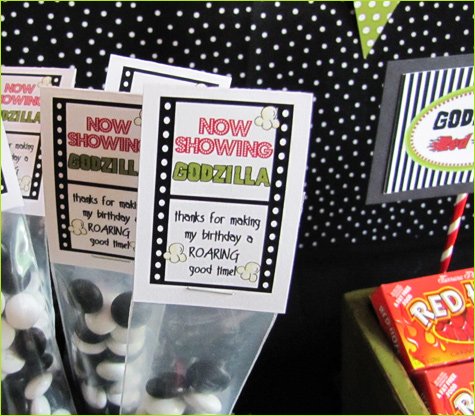 Since I design invitations and paper goods, I pretty much made everything for this party myself, but I have to give a BIG THANKS to Lori at Lori’s Place Gourmet Delights for the absolutely amazing Godzilla cookies she made for me, and also to Amy at Sweet Celebrations for the yummy chocolate and sprinkle-coated Oreos and pretzels! 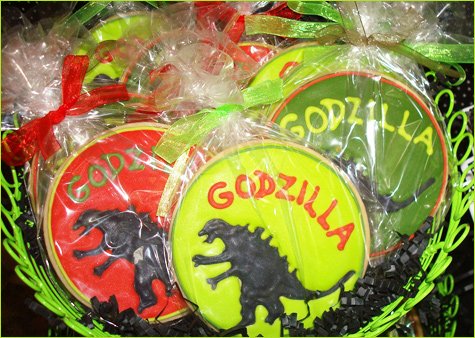 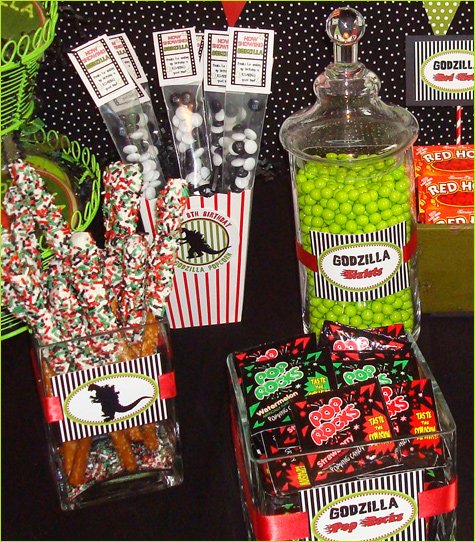 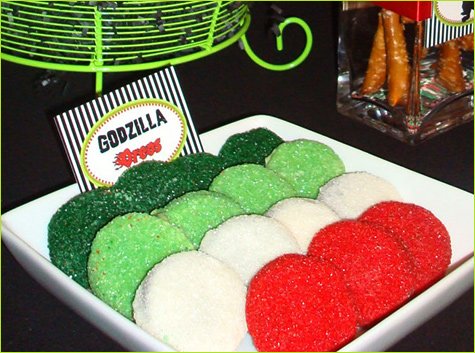 For the paper elements, I stared by creating the “birthday logo”, which all the paper goods and cookies were designed to match.

I also created silhouettes of all the Godzilla Characters that my son loves and placed them over a Japanese flag background….then I had a 4 ft poster of this design printed by Zazzle. All of Jack’s friends that came to the party got to signed their name on the poster – and he now has it hanging in his room!

I also made a “Happy Birthday” banner, candy jar labels, favor bags, cupcake toppers, and large cupcake topper. (There are several other designs available in my shop.) 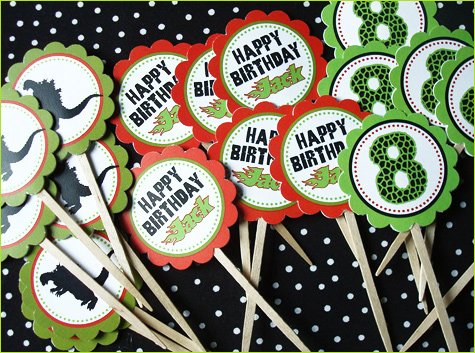 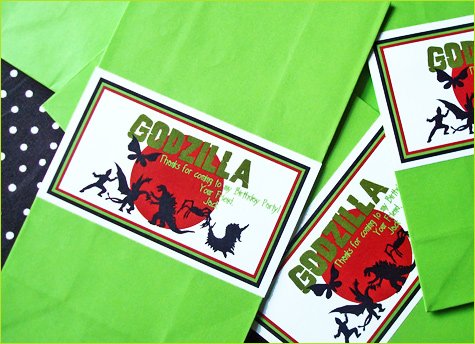 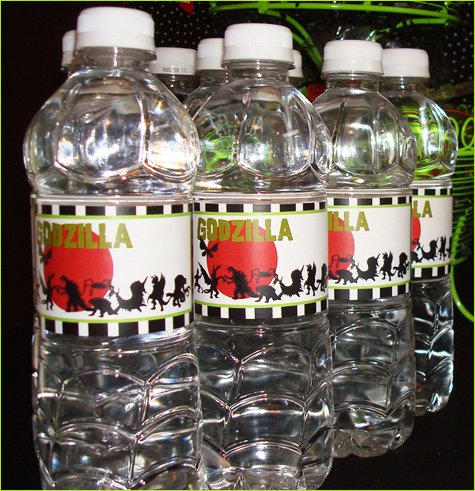 I also made the 4-ft film strip poster of my son, which hung next to the birthday banner and featured different photos of him from the past year. I thought the film strip concept fit in nicely with the idea of it being “movie night”, and this made for a nice keepsake from the party!

For the cupcake stand, I lined 2 stands I already owned with a beautiful textured paper that resembled “Godzilla skin” and trimmed the edges with a satin red ribbon. 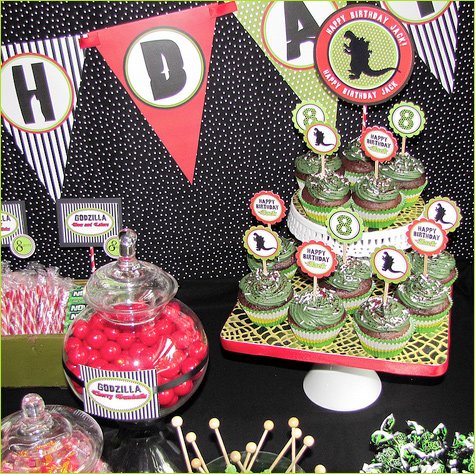 The colors for the party were olive green, lime green, red, black and white. I tried to find candy in those colors and that was also somehow representative of Godzilla… Atomic fire balls and red hots for the fire and rock candy sticks and Pop Rocks for the explosions! 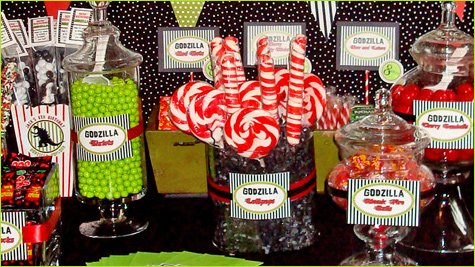 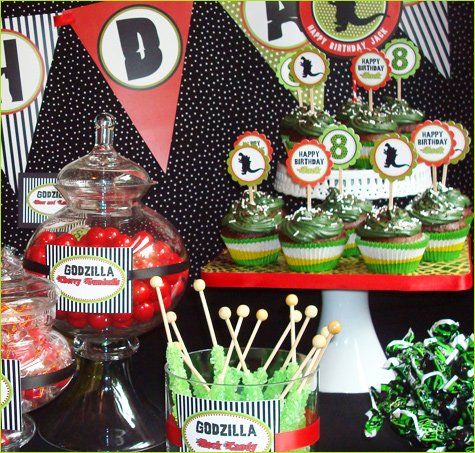 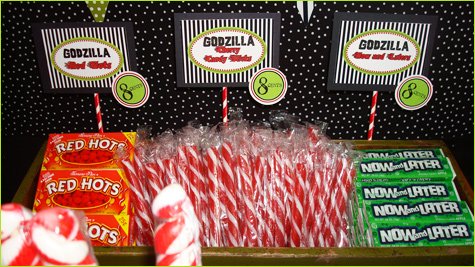 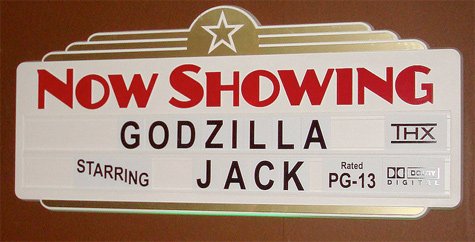