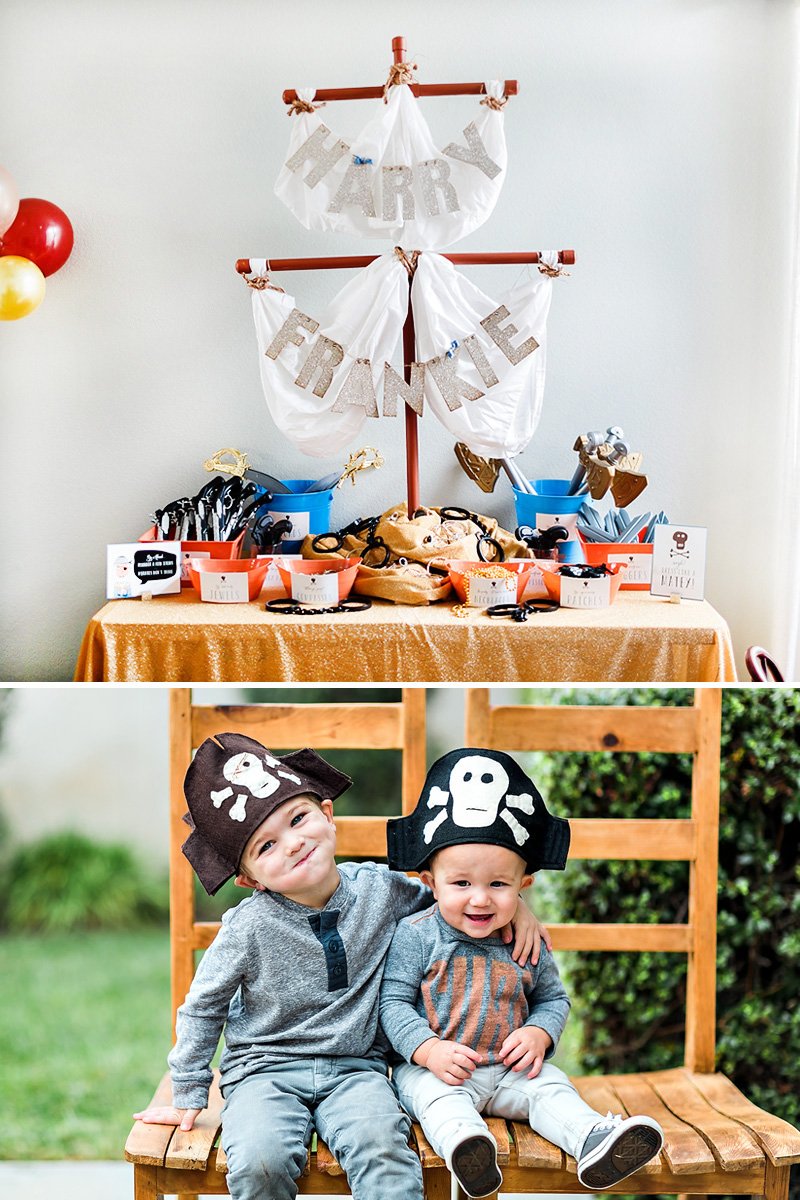 I can always count on talented duo Karrie and Elizabeth of Posh Paperie to take a popular theme and re-invent it with their signature {and insanely awesome!} designer touch. In this case, it’s cool illustrated cartoon pirates + whimsical nautical elements that set the tone a Rad Illustrated Swashbuckler Pirate Party for Karrie’s 4 year-old and 1 year-old birthday boys. 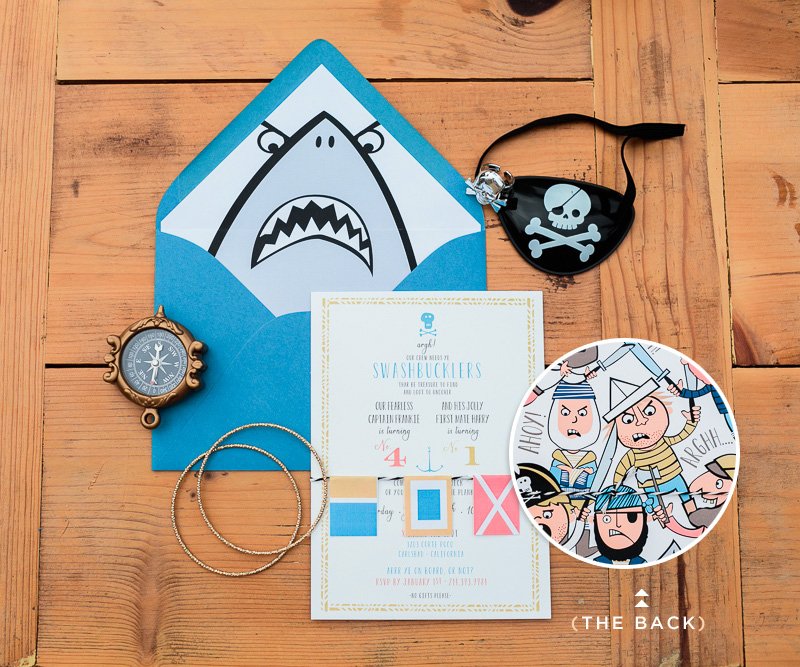 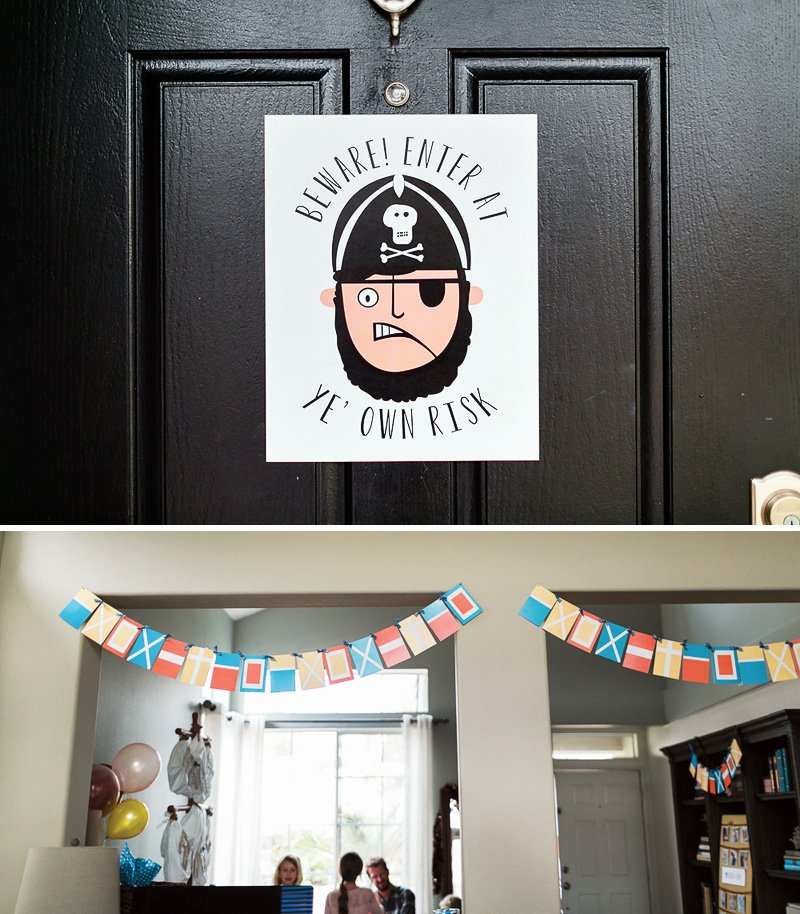 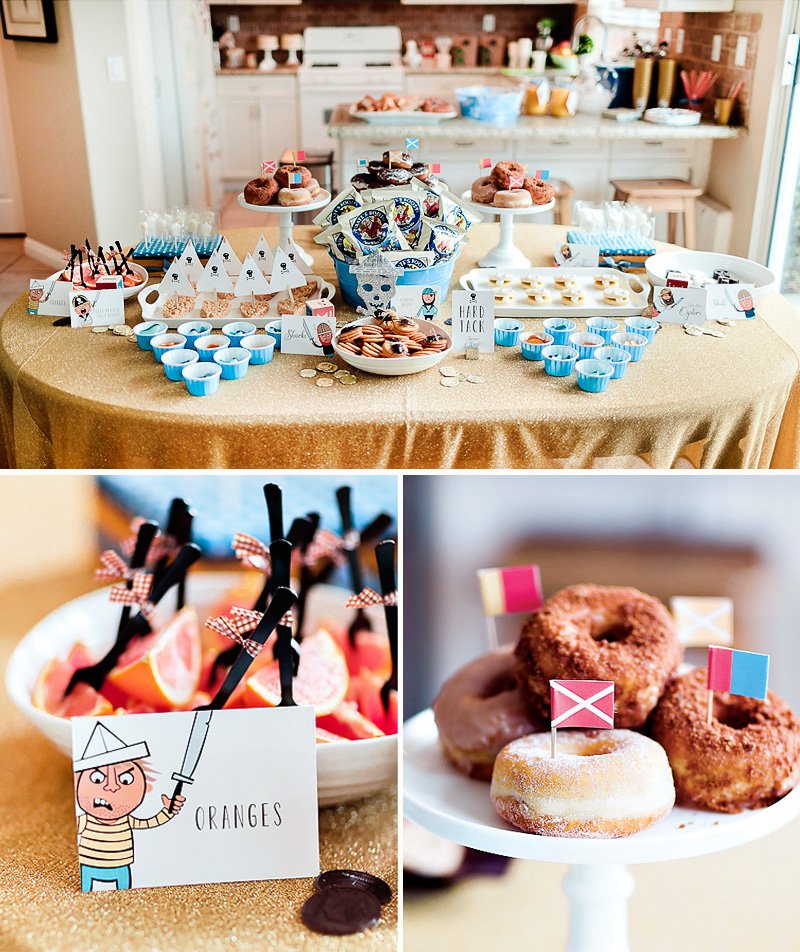 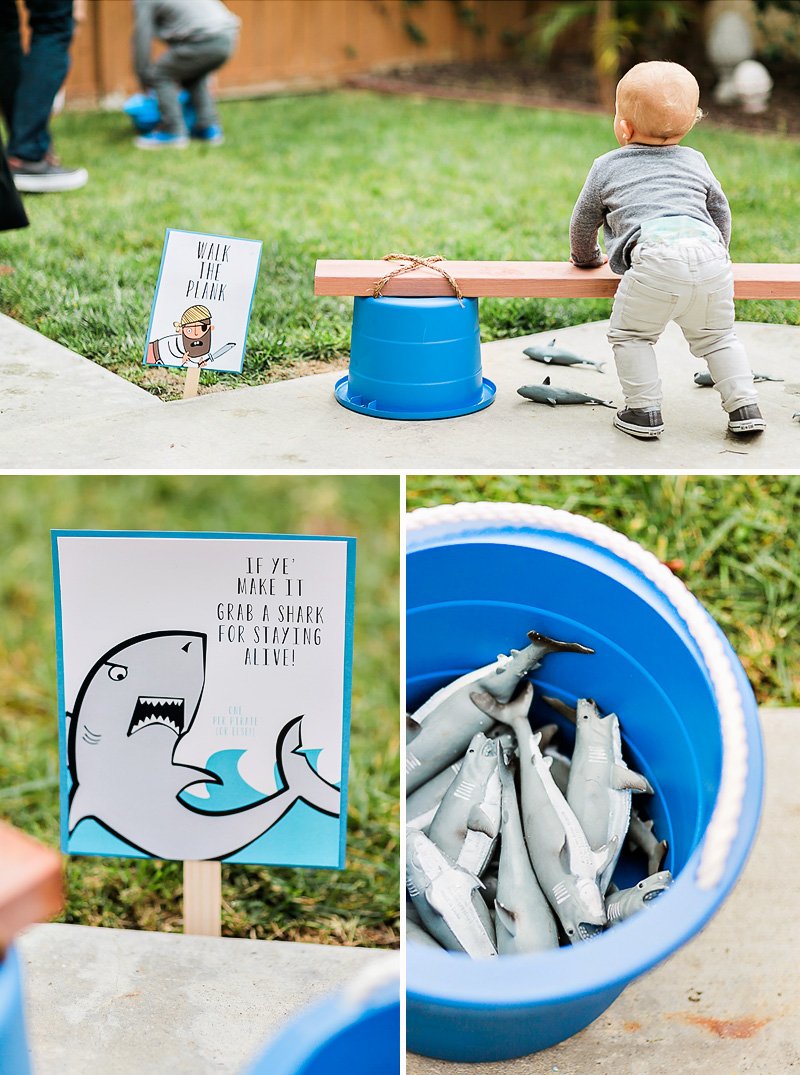 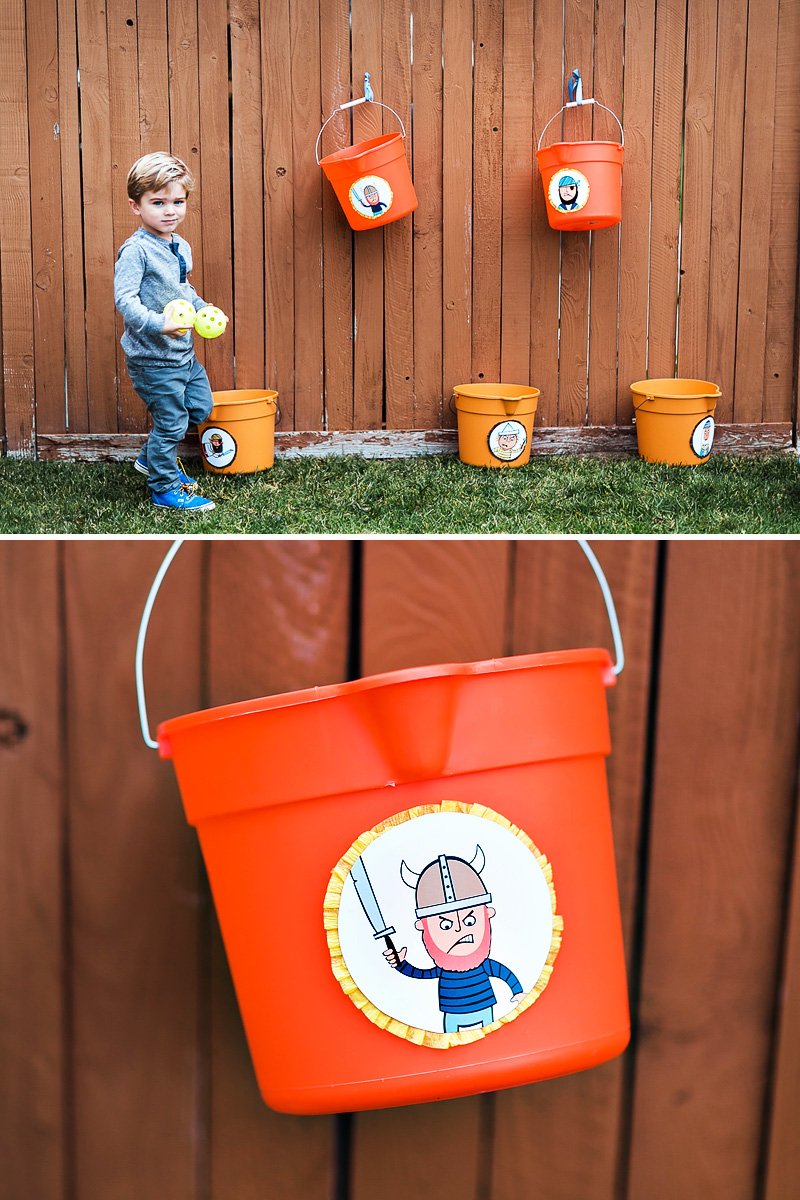 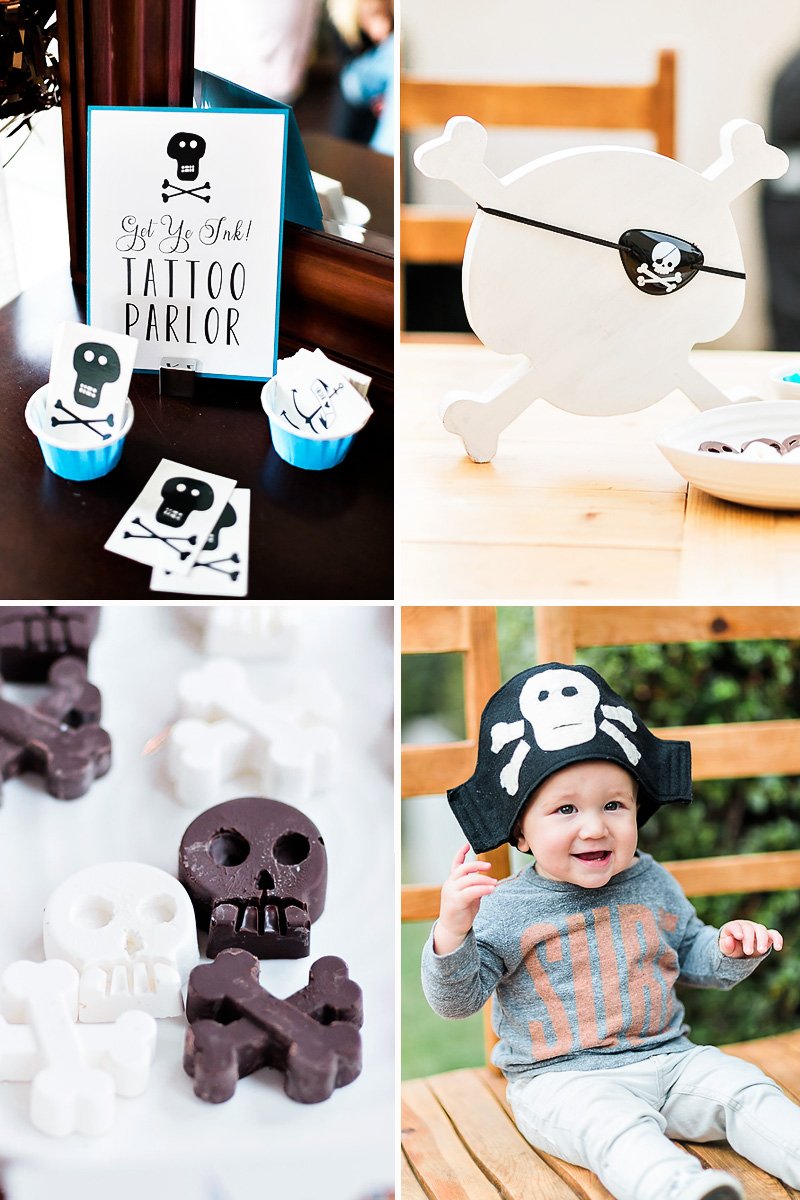 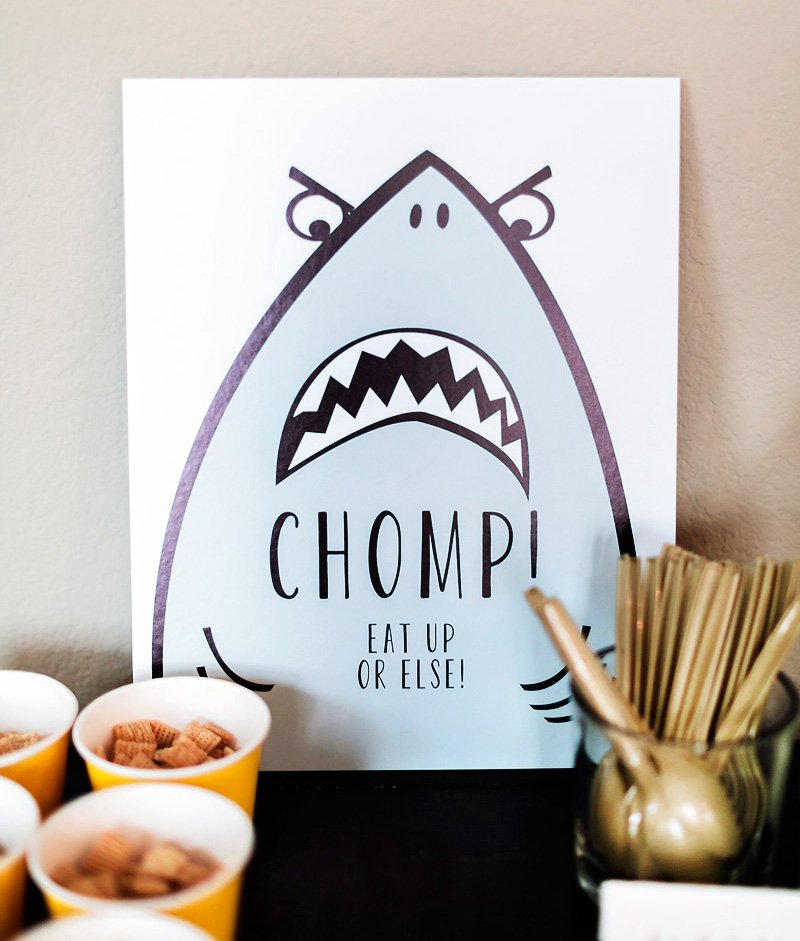 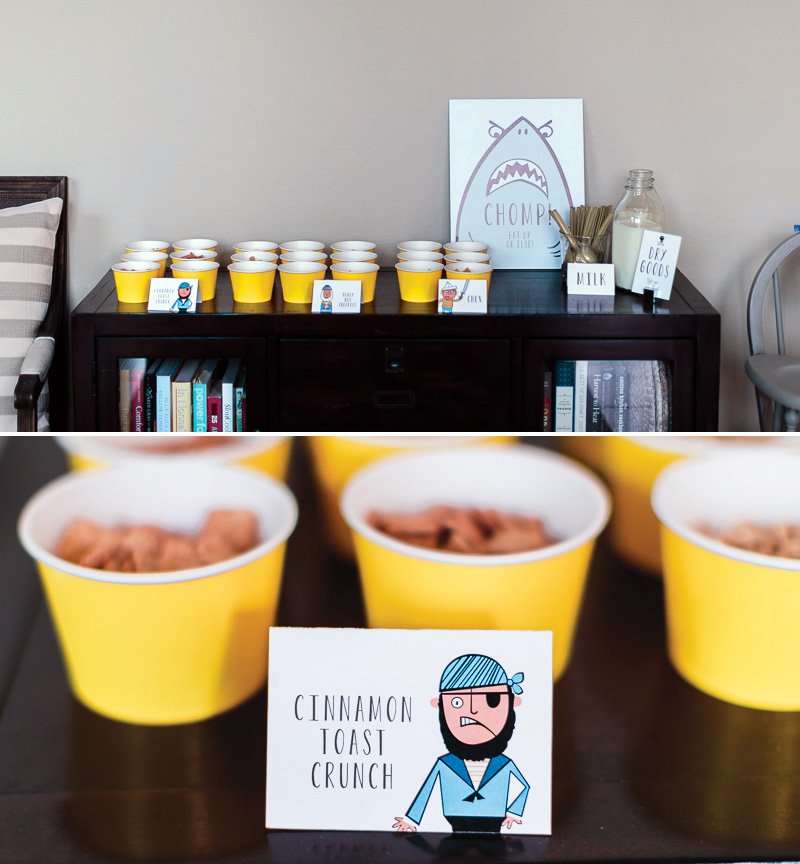 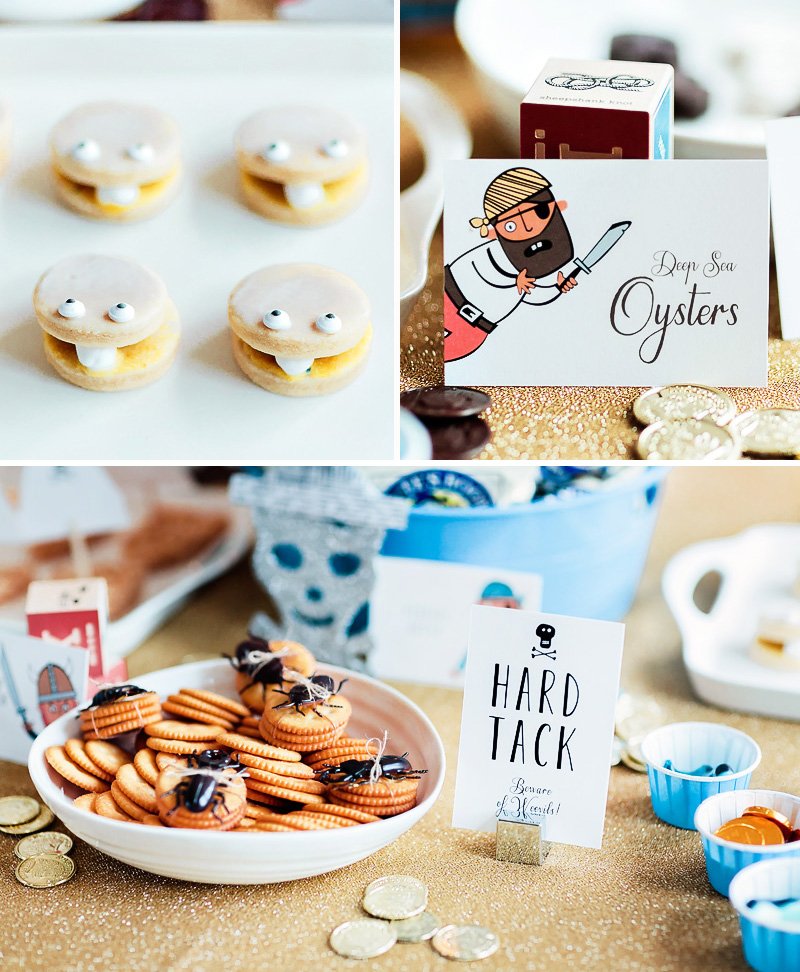 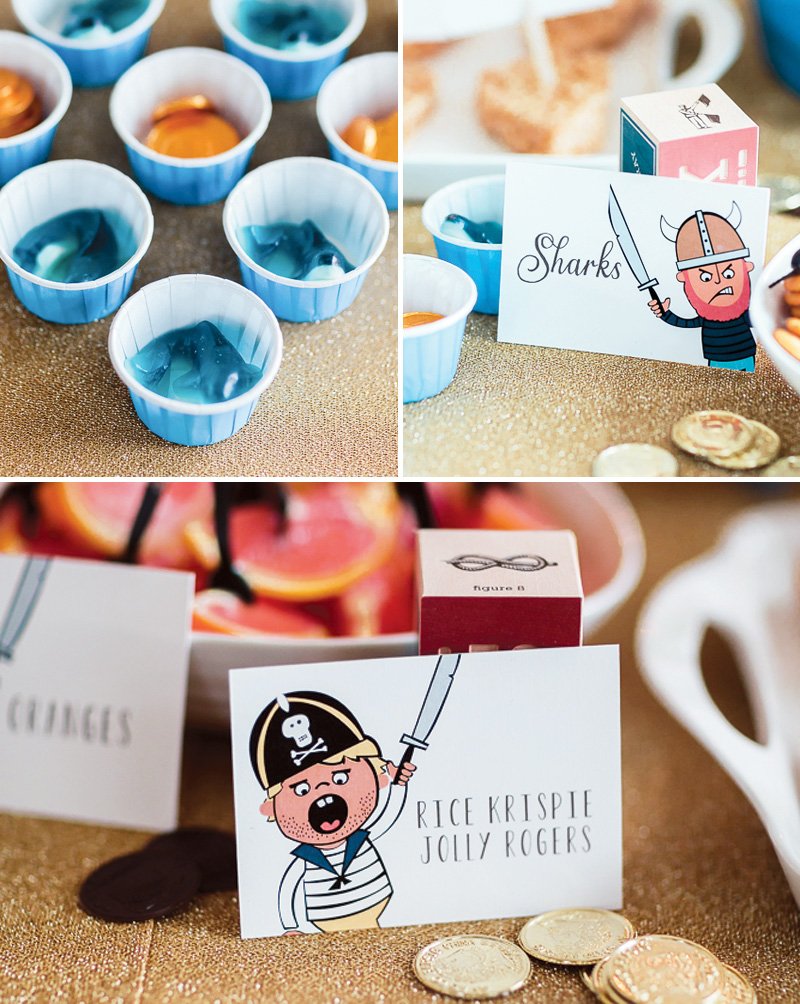 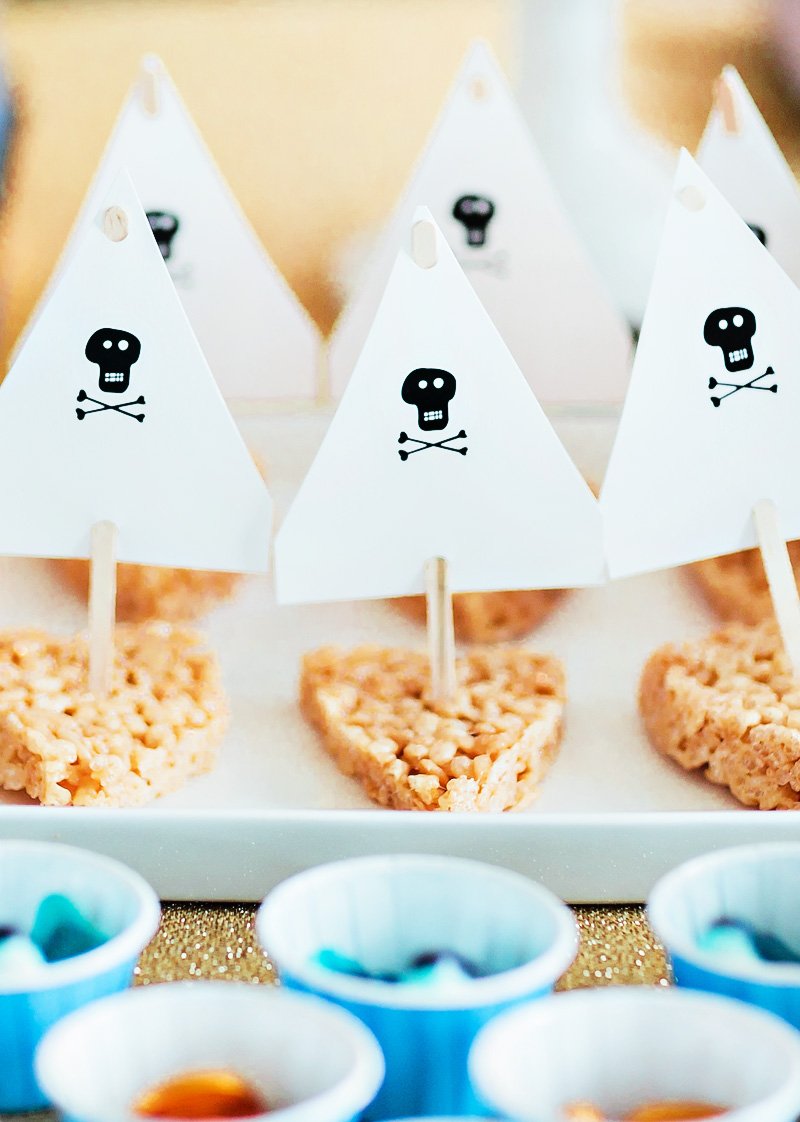 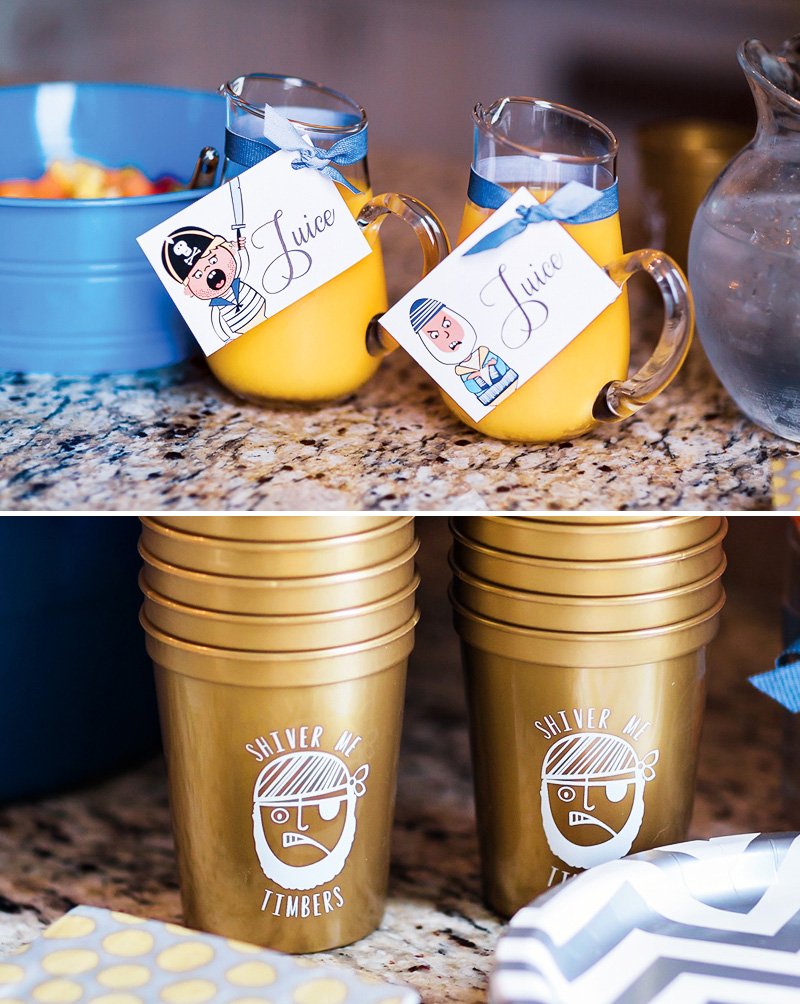 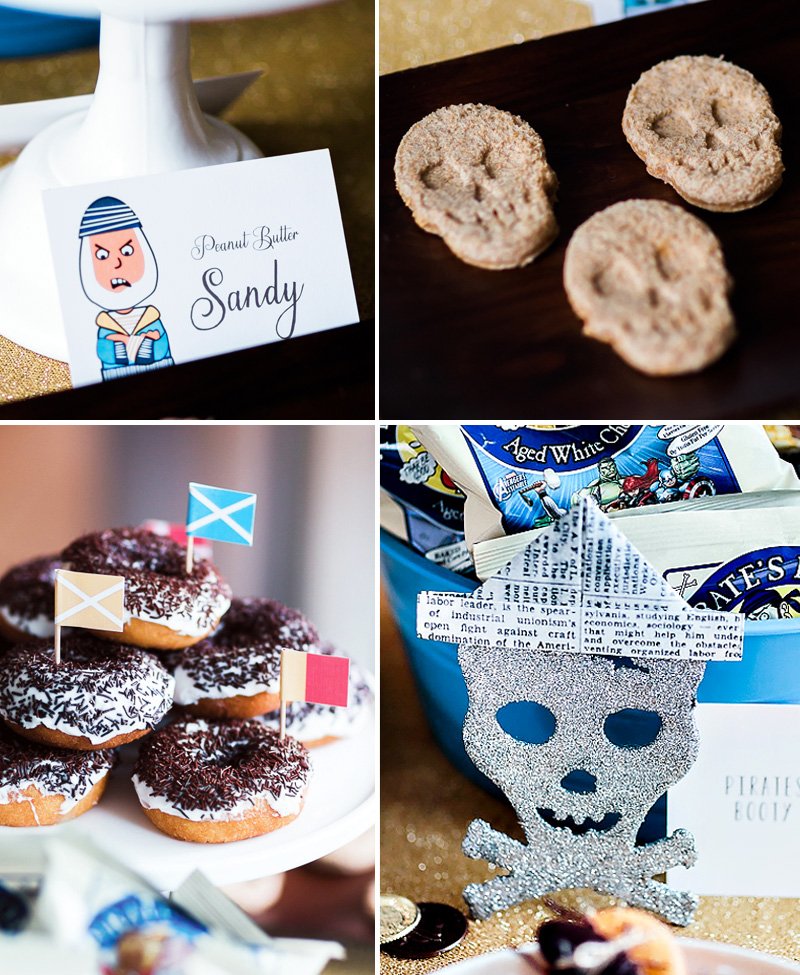 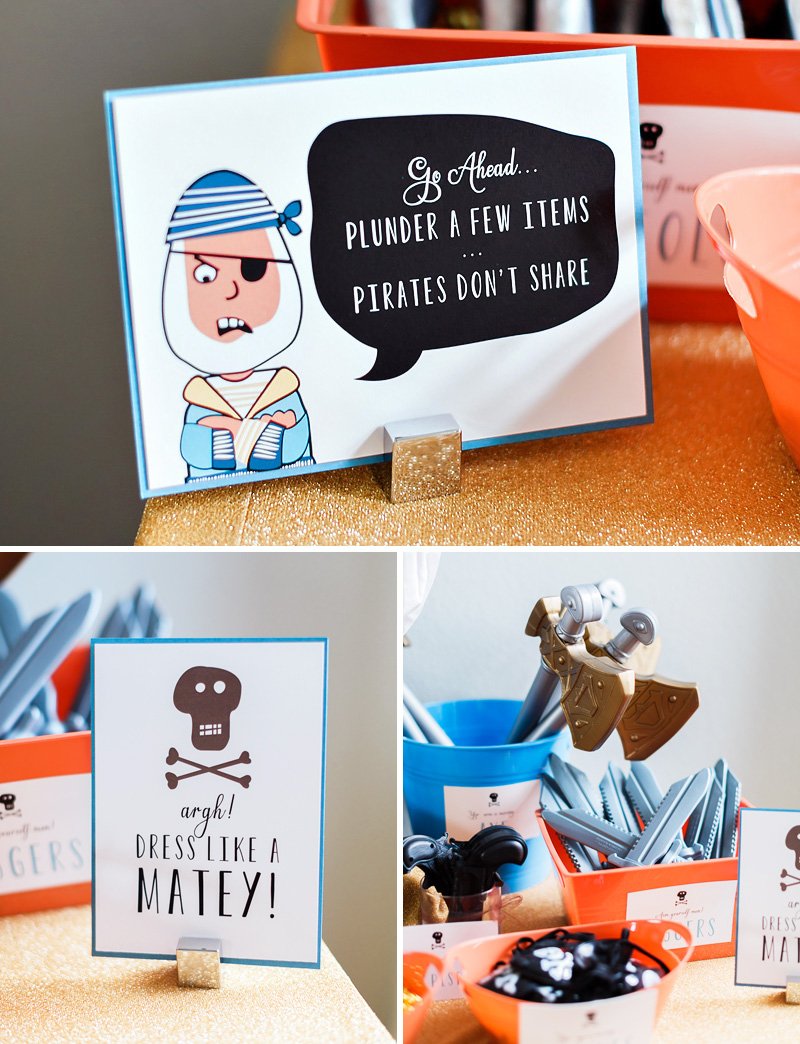 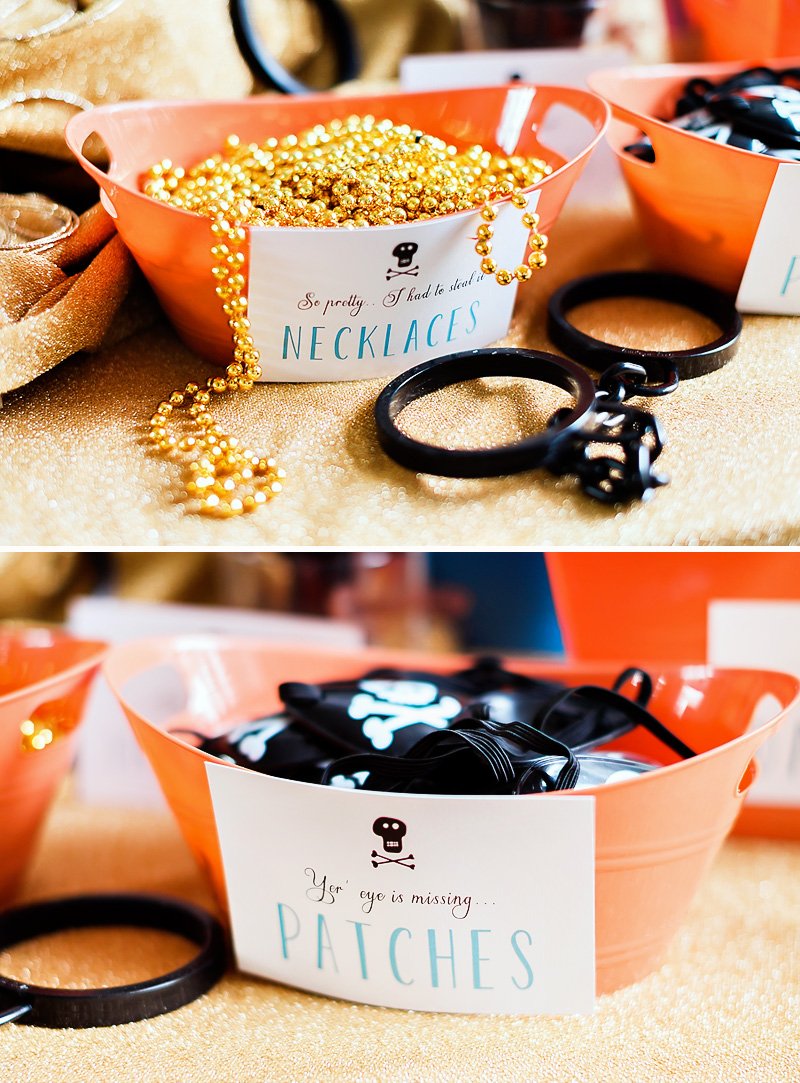 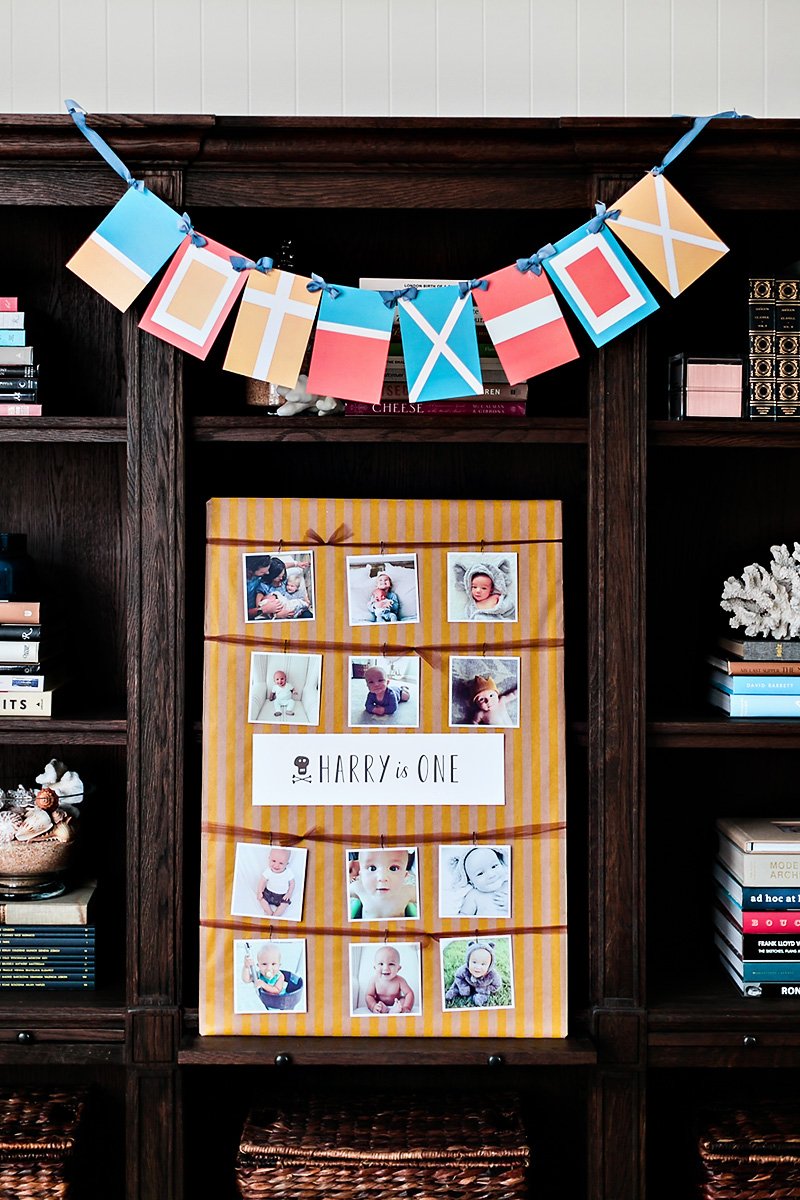 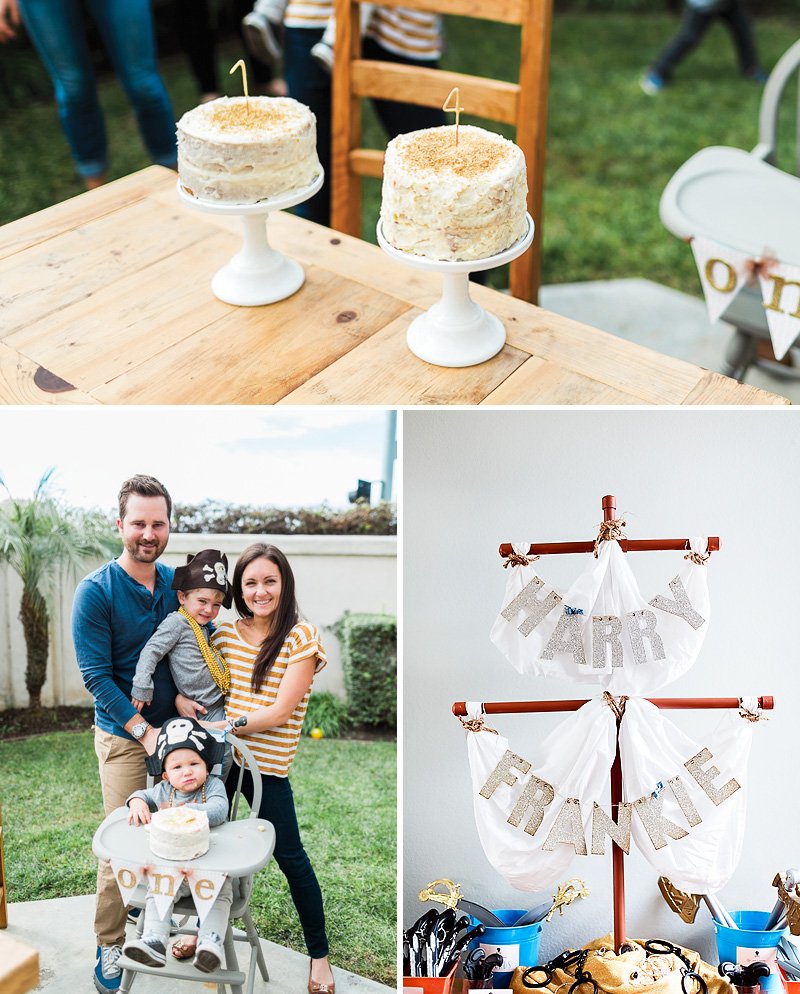 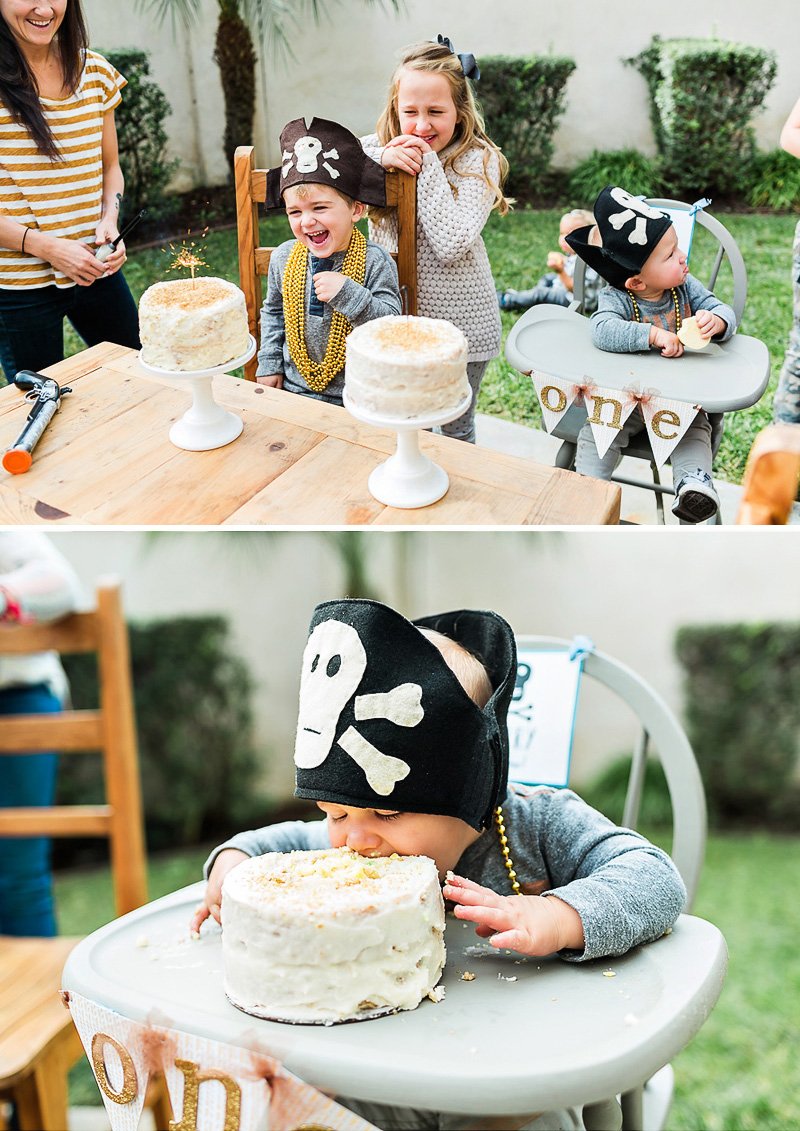 PARTY DETAILS, as told by Karrie…

Frankie has been obsessed with pirates these days and all things ninja, that is why we went with the “swashbuckler” theme. I didn’t want to do the typical black and red pirate party theme since that is what everyone does, plus my tiny pirate loves blue and brown!

I tried to tie in some nautical elements because I wanted it to still have a fun and playful feel since I was combining my two boys birthdays! Frankie was turning 4 and Harry was turning 1. Since Harrison was only turning 1, I didn’t want the party to be too “old” for him, so I made sure to add in some whimsical elements.

For the invitation, the front had all the info and the back had all the pirates you see throughout the party! We had a tiny marine flag banner wrapped around the invite too, just to add a fun embellishment. The liner was my favorite!! A giant shark bite!

We had a giant gold X in front of the house for X marks the spot, and glitter pirate skulls with a twist! I made tiny newspaper hats for them to give them a nautical feel. (We are actually selling these in our Etsy shop!)

My dad made a pirate mast, so that our “loot” table could look like a ship!! Each tiny pirate got to load up with jewels, costume pieces, and weapons!

Since the party was at 10 am, we had a variety of brunch items: a cereal bar ( Frankie’s favorite cereals), VG’s donuts, orange slices, rice krispie “boats”, clam cookies, and my favorite: hard tack! I read that pirate would have to eat the hard tack out of the barrels and the weevils would get all in their stale bread… and the pirates ate it anyways!!!
So, I just had to include it in our brunch set up!!! Oh, and obviously “pirates booty!” I had to get custom cups in gold, so it looked like our party was full of treasure!

We played walk the plank and each kid got a squishy shark if they made it across!!! We did a scavenger hunt throughout our neighborhood of gold coins that we hid for the kids to hunt out and find! I also set up a “bucket and ball toss” just something all the tiny little babies would be into, that way they had something to throw the balls into, and just hang out in the backyard :) We also had custom tattoos for the boys to put on… (and their mamas too!). (Also in the Etsy shop!!) My favorite one was “I love mom” haha!! Classic for these tiny pirates!!

And of course, my last and FAVORITE detail is when harry went FACE FIRST into his cake! haha! Gosh I love that kid.. and he LOVES food :) no doubt about it.