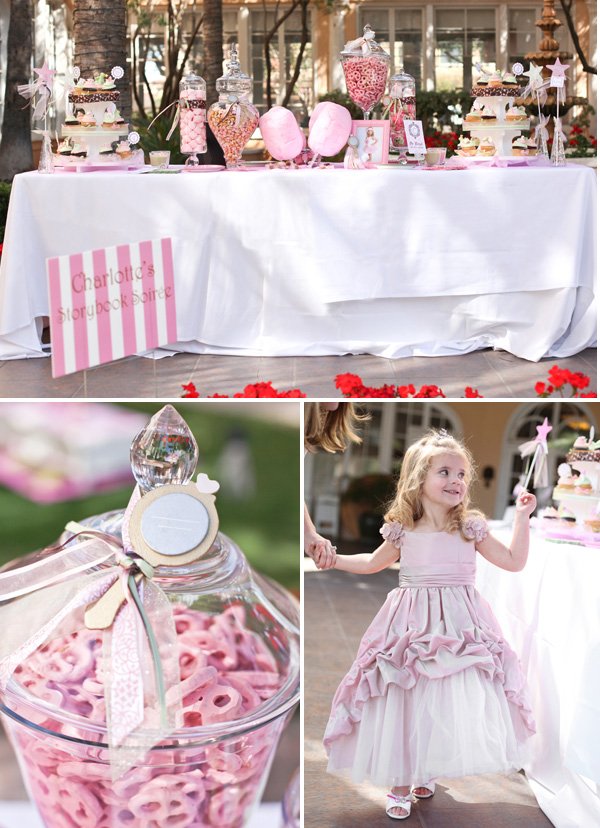 Everyone seems to be smitten with the Royal Wedding these days, but when it comes to moms and their daughters, there are actually “royal princesses” running around all the time! And speaking of that, I’m seriously just head over heels for this sweet Royal Princess themed party (designed by Nicole, the birthday girl’s mom, and photographed by Diana Elizabeth)… for more than one reason.

FIRST, there’s the obvious: it’s ridiculously adorable and definitely looks like a fairytale! Let’s start with the dreamy cupcake toppers, shall we: frog prince, castle, glass slipper, storybook, princess wand… all the key players! And then of course there’s the fabulous graphics, the special storytime setting, the “Royal Ball” (pink bouncy balls), and much more. 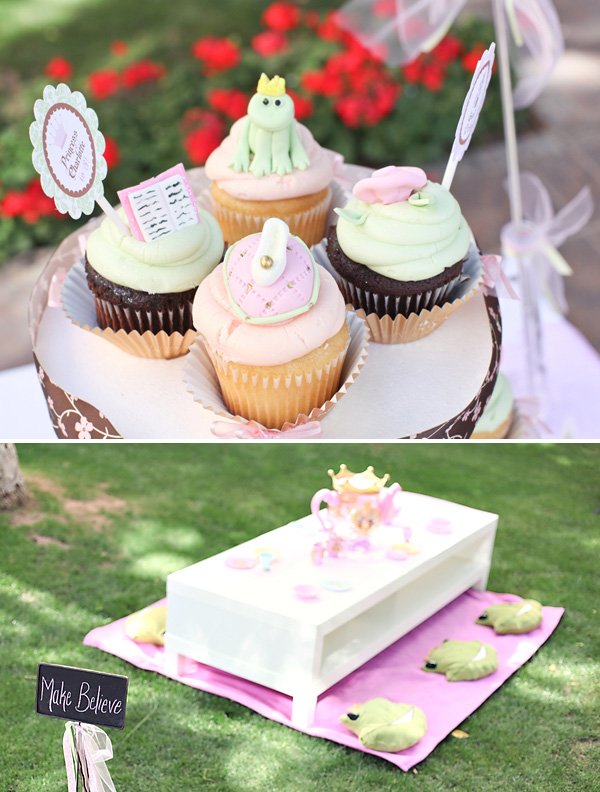 NEXT, there’s the special meaning behind this party… which has a something to do with why mom really went all out for this party. If you have a few extra minutes, please take the time to read through the reason (which is at the bottom of this post), and is explained by Charlotte’s mom. 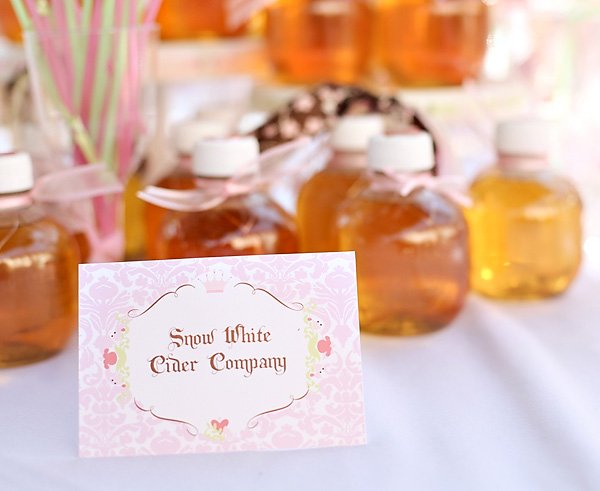 Read on for lots more absolutely lovely, whimsical images + all the party details, as told by both Nicole and Diana… 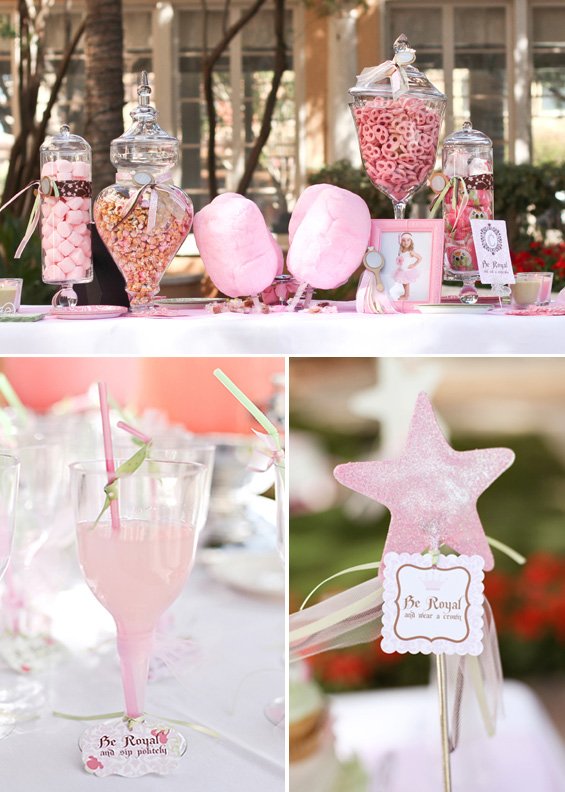 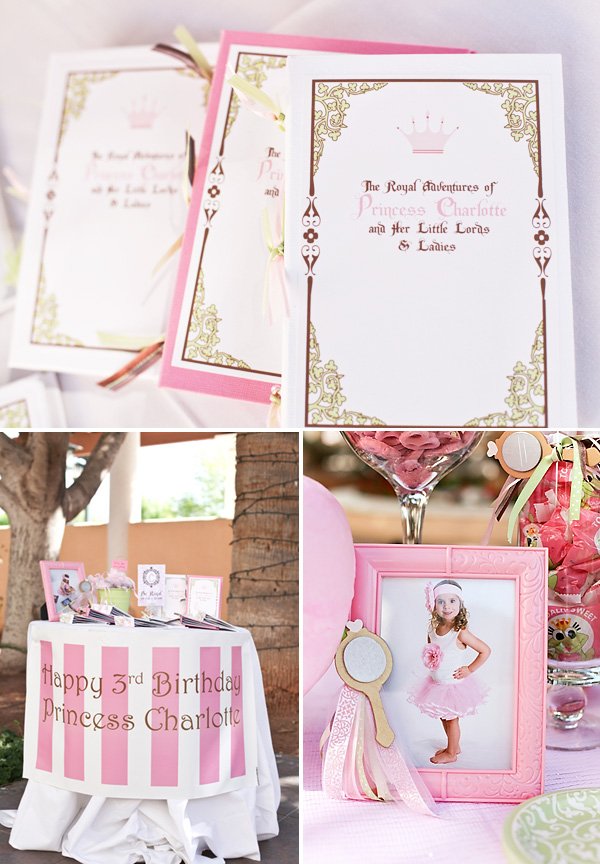 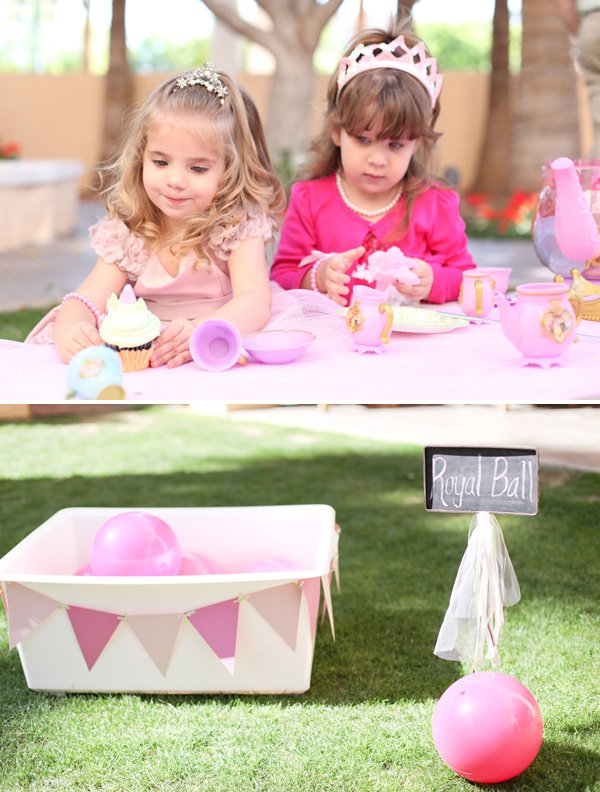 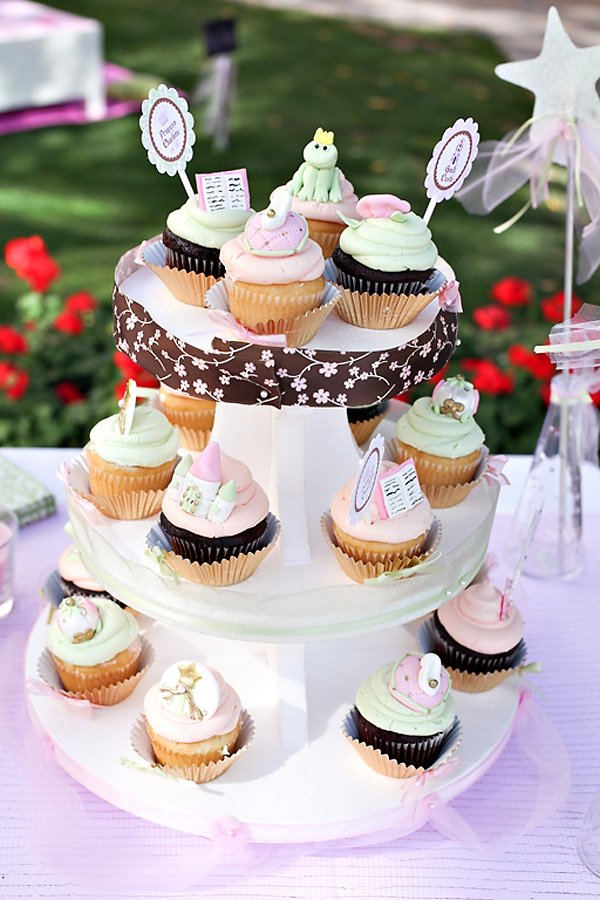 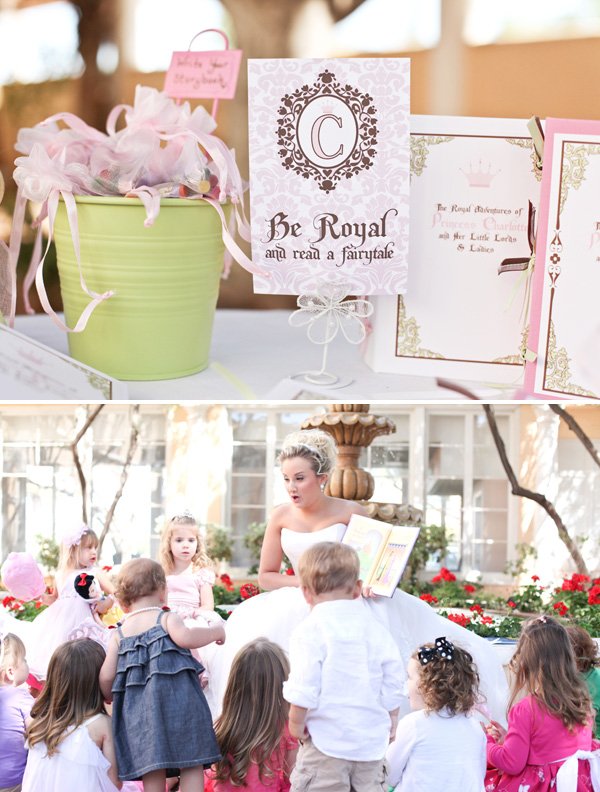 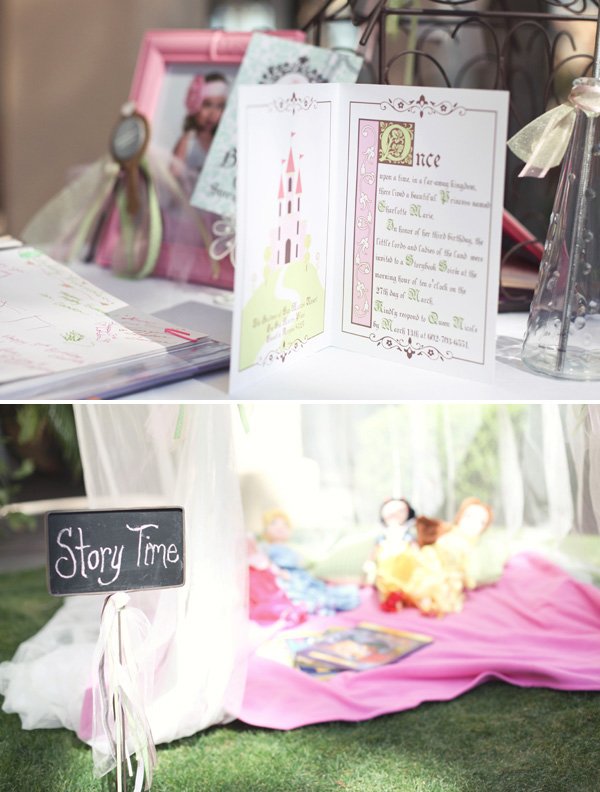 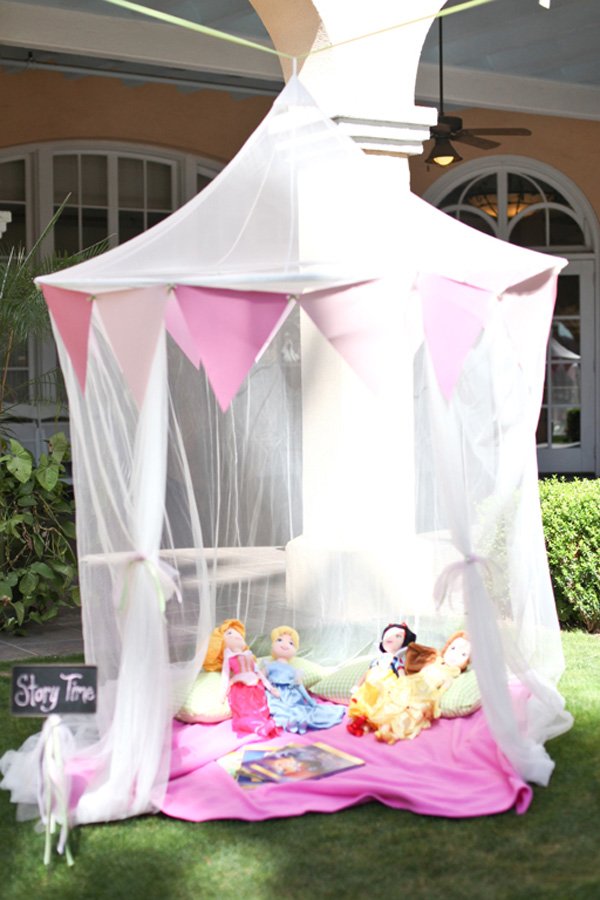 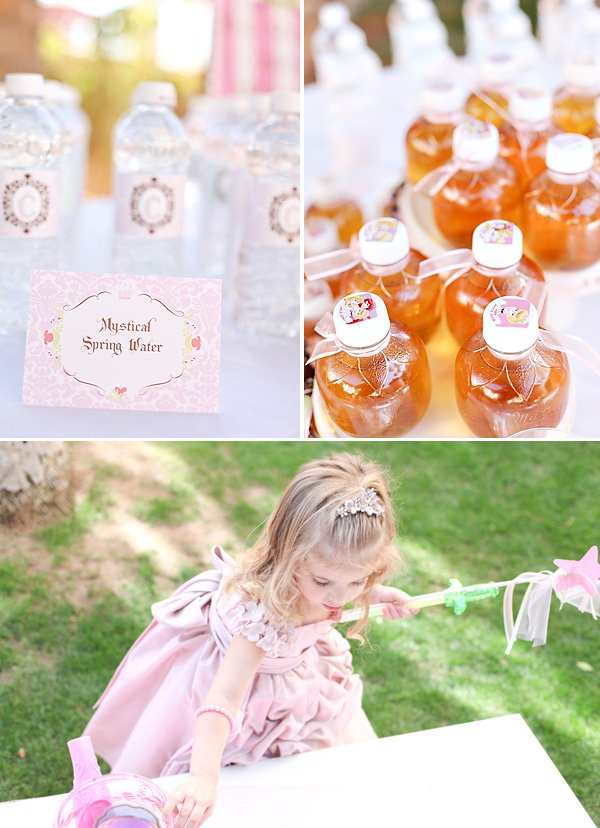 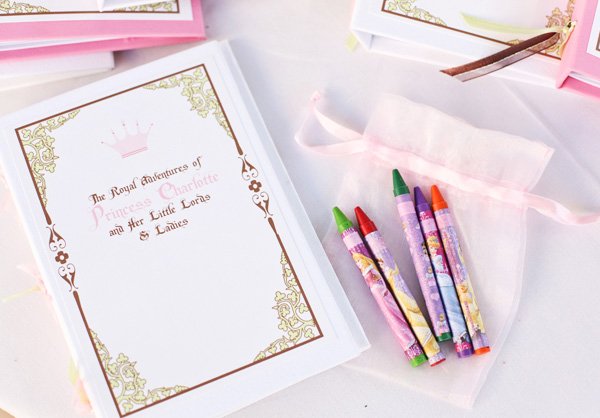 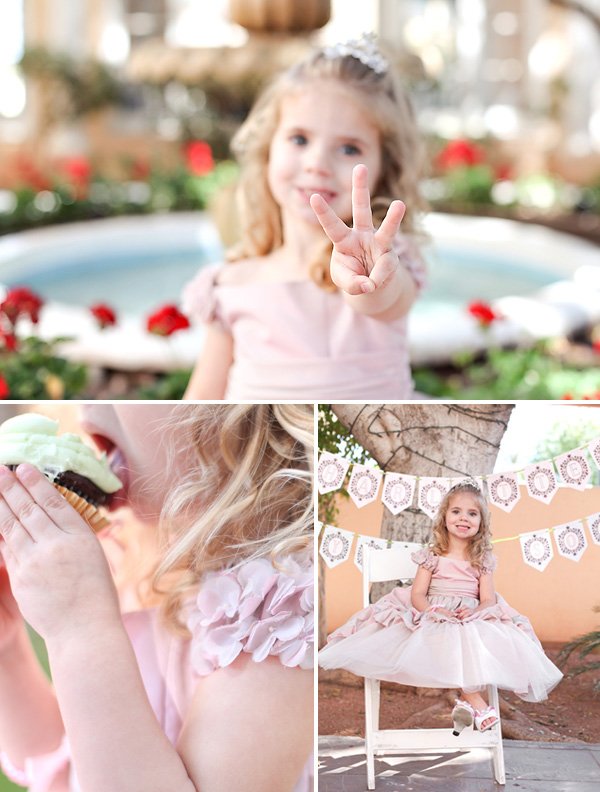 PARTY DETAILS, as told by Diana…

“Hear yee, Hear yee! Princess Charlotte turned three recently and celebrated at the San Marcos Resort in Chandler.  This little girl is very special. Charlotte entered the world as beautiful as ever, with a cleft lip, and incredibly loved.  She had surgery early on and you can barely notice the small scar above her lip.  She’s full of energy, she’s incredibly smart (mom used to be a teacher) and she wants to be a Princess, of course!

Every year Charlotte celebrates a birthday, all gift donations go to Barrow Cleft and Craniofacial Center at Saint Joseph’s Hospital.  It’s just another way for Charlotte and her family to give back.  Charlotte’s story is so important that mom and dad have mentored couples who find out their child will be born with a cleft lip.

All this to say, this lovely little Princess deserves a fun, whimsical, 3rd birthday at the San Marcos Resort in Chandler!  The day was filled with lots of pink, Princess things, sugar and cupcakes, and crowns, of course.  Happy Birthday Charlotte, to many more!

There were stations of fun. Sweets station, an area to lounge in and read Princess books with your favorite Princesses, and an area to write your own fairytale!

All signage was purchased from Papercandee on Etsy

Oh, and don’t forget the real-life princess who came to read to the guests!  She used to be Cinderella at Disneyland! =)

To view more CLICK HERE TO SEE THE SLIDESHOW!”

“Charlotte’s third birthday party was intended to be a low-key, neighborhood park SUPERHERO themed party, but one month before the date her auntie Tonia asked her, ‘Really? Not a princess party?’  From that moment on, Charlotte’s mind did not waiver from a soiree fit for a princess. My party-planning world was flipped upside-down.  The only silver lining, I own a bridal boutique, so at least I had one detail covered… the gown!

We decided on hosting an early afternoon Storybook Soiree after I was inspired by the Storybook invitations created by Desiree from Papercandee.  You know when you’re watching a classic Disney film and they flip the first few pages of the storybook??? Yeah, her invitations are just like that. Perfection!

The location was the gardens at San Marcos Resort , a turn-of the century hotel (that’s OLD for Arizona) that keeps an impressive list of guests; Fred Astaire, Joan Crawford, Bing Crosby, Clark Gable, and now our little princess; Charlotte.  With shade from a towering tree and two bubbling fountains, it was not hard to be inspired!

I stopped at IKEA just for the basics and walked out with a white media bench, a large plastic tub, an outdoor insect netting tent, 6 frog prince chair cushions, lanterns, candles, vases, straws, buckets, and so much more!  The large plastic tub turned into a holding bin for a dozen pink, plastic balls.  Pink pennant garland was added and a chalkboard sign declared it the “Royal Ball’. Get it?  The insect netting tent became a whimsical castle with coordinating pennants and sheltered a pink fleece blanket, two plaid pillows, four Disney princess dolls (if your daughter doesn’t have them… go get them from the Disney Store) and classic Disney storybooks.  An antique-like vanity was adorned with painted-metal buckets filled with goodies for the little ladies, tiaras, wands, pearl bracelets and necklaces; swords, and crowns for the lords. The low media bench was placed on a pink fleece blanket and surrounded by the frog prince pillows.  Set daintily on the top was the most adorable tea set purchased at the Disney Store.


Desiree from Papercandee accessorized every aspect of the party with coordinating signs, favor tags, labels, coloring book covers, cupcake toppers and of course, the banner ‘Charlotte’s Storybook Soiree’.  She played up the ‘Be Royal and…’ theme and had lots of fun with the thematic beverages (Snow White Cider Company, Mystical Spring Water).

The party was intended for Charlotte and her friends.  Everything was at kid level and nothing was off limits.  You want five wands, a crown, two swords, and a dozen cupcakes? Sure!  Kids traveled from the ‘Make Believe’ tea party to the ‘Dress Up’ vanity to the ‘Story Time’ castle and ‘Royal Ball’ play area.  Some of the more refined (older) ladies chose to pick one of the hand-made storybook favors and crayons and start their own ‘Once Upon A Time.’  When the clock struck eleven, a real princess arrived, sat on the edge of the fountain, and read princess stories to dozens of awed eyes and ears.

Charlotte’s birthdays are very important to us; no doubt a reason to celebrate.  On the day that Charlotte was born, we saw her little cleft lip and palate for the first time.  Two surgeries and countless doctor’s appoints in the first year had us saying, ‘If only we survive the first year!’  As the first birthday approached, we decided to thank the team of doctors at Barrow Cleft and Craniofacial Center at Saint Joseph’s Hospital each and every year.  Guests were asked to bring a donation to the center in lieu of presents for the birthday girl. After the party, Charlotte makes her annual trip to the hospital to share the joy and grace that we get to see each and every day.  I know Daddy thinks Mommy goes outrageously overboard, but if you saw her sweet smile as she entered the party you’d agree.  It’s worth more than the money spent; she’s got a million dollar smile!”