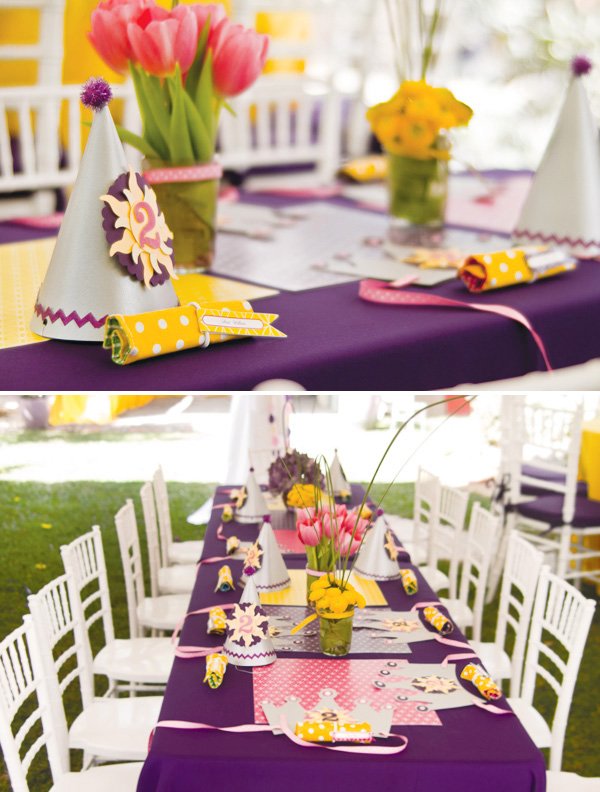 Ready to get all tangled up in birthday FUN? Good… because this gorgeous Tangled inspired birthday party that Laila of Two Tiny Loves created for her daughter is exactly that – colorful, whimsical, and filled with tons of beautiful & creative movie-inspired details!

Some of my favorite elements include the clever layered bricks “tower” that was used to display the food, the fabulous DIY yarn ball chandelier hanging from the top of the tent, and the creative yarn “Rapunzel braids” that adorned the brick tower AND each of the favors. Also loving the “modern princess” vibe of the paper printables that Laila designed herself, as well as the pretty handmade birthday hats and princess wands. And of course there’s the amazing princess tower cake that definitely deserves a shout out – I think it would be more properly described as an “edible work of art”! Check this out: 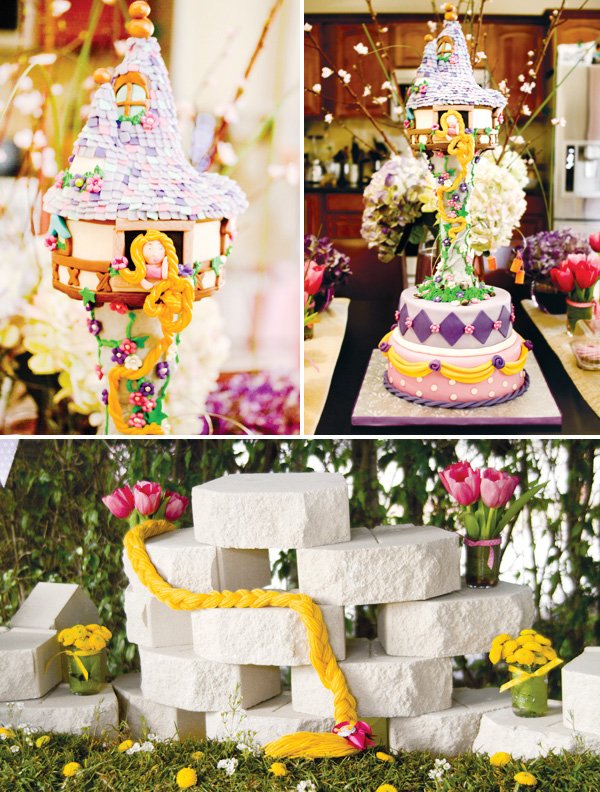 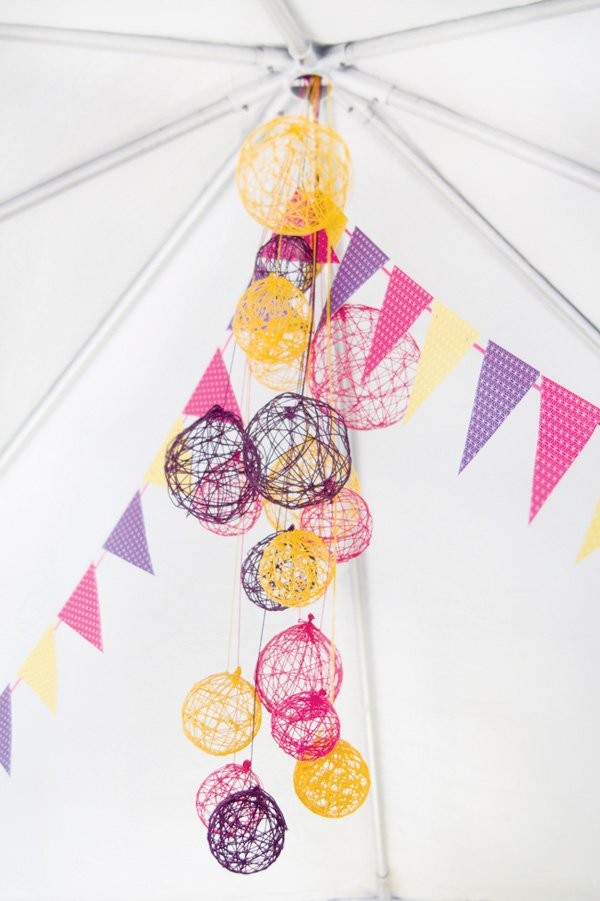 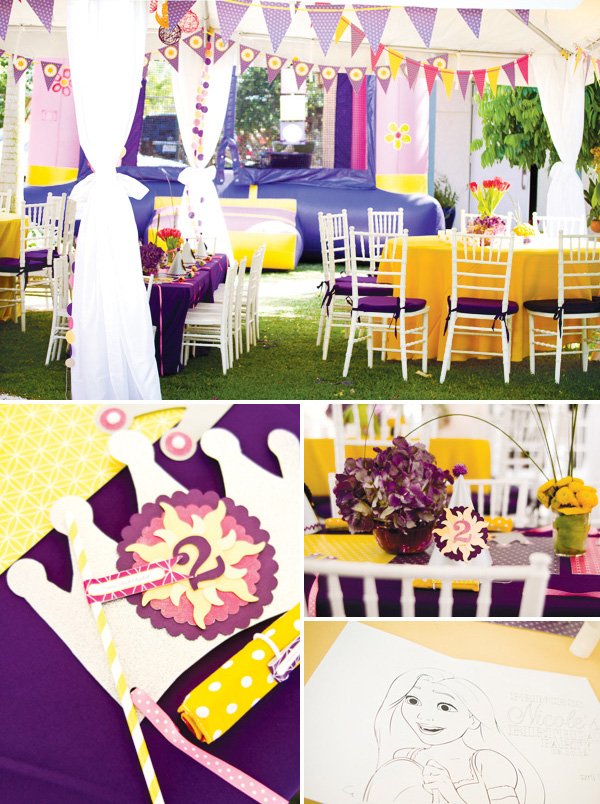 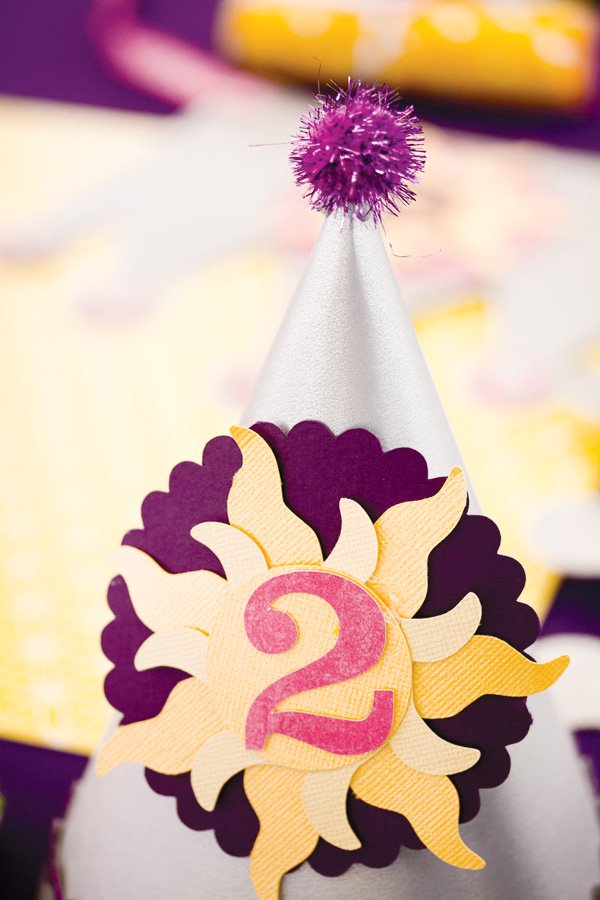 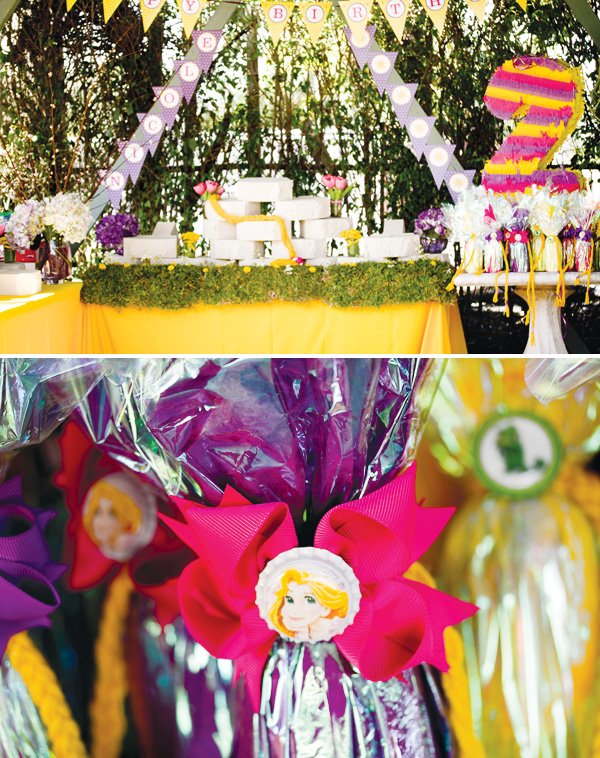 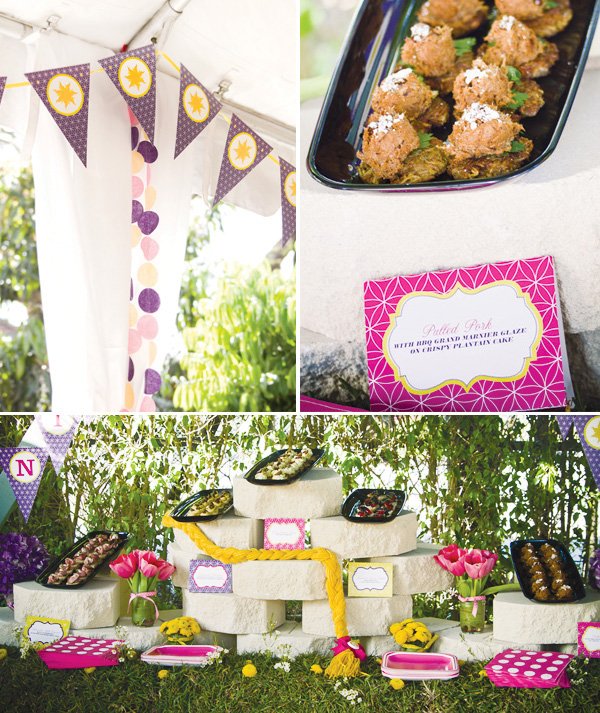 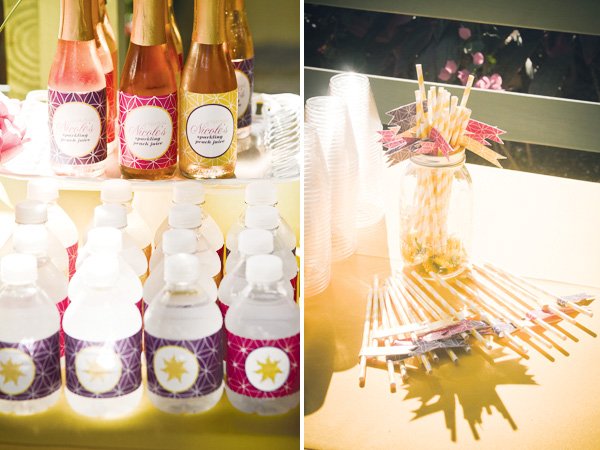 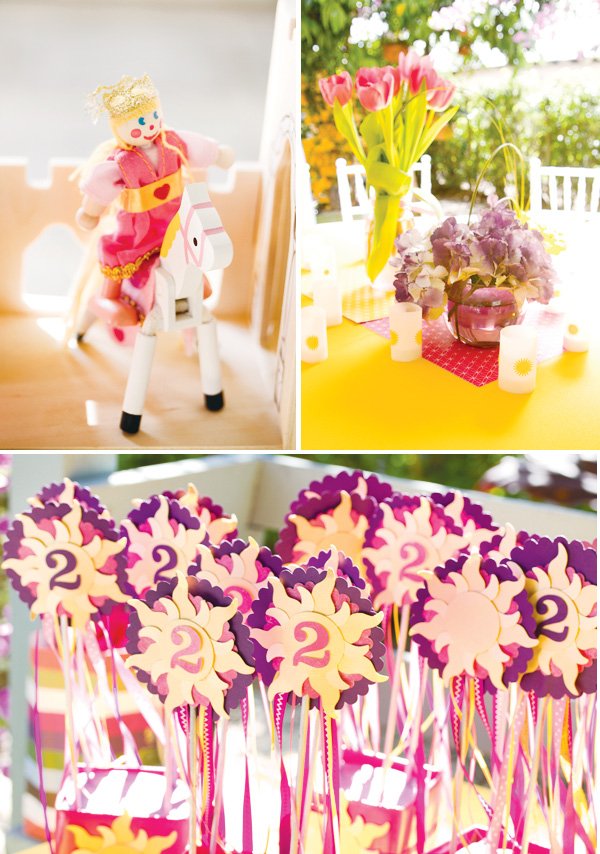 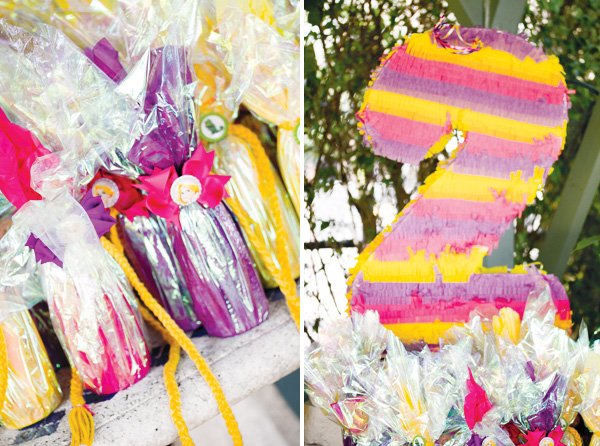 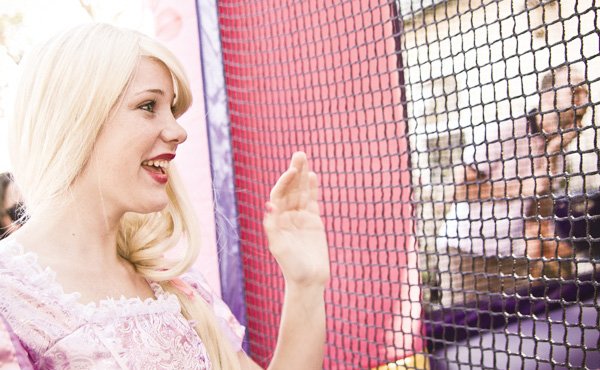 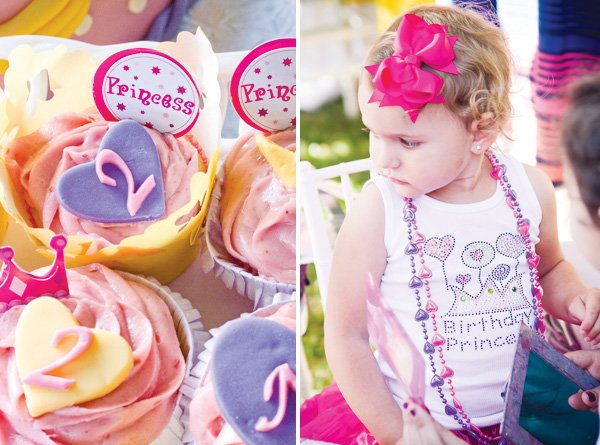 Being a graphic designer and having just launched my own line of party printables on etsy, I put a lot of thought and effort into planning my daughter’s second birthday party. I had everything ready to go and when I showed it to my little Nicole, and told her it was for her birthday she said “mommy no, cesi Punzel party”, which in Nicole’s lingo means Mommy no, princess Rapunzel party”. So I was back to the drawing board and having to throw the one party I was never thrilled about doing: a princess party.

I thought long and hard about how I could incorporate the theme without having it be the Disney princess everywhere. I also was in a dilemma since lilac is probably my least favorite color ever. So i made the executive decision to use brights instead of the pastels seen throughout the movie. I knew that the most evident way to convey “Tangled” was to do braids so I came up with the idea of braiding yarn around the party favors and enlisted in the help of talented Yoli from Yoli’s Bowtique to create bows with bottlecaps with Rapunzel on them. For the boys we did flat bottlecaps with Pascal on them. I used the oversized number 2 piñata I ordered from Abita Achie on Etsy to stand and decorate the back part of the table designated for the party favors. I wanted Nicole to be and feel like the princess so I made a little sign that read Welcome to Princess Nicole’s second birthday party and purchased a tank top that read birthday princess for Nicole to wear with her favorite petti skirt.

I am lucky enough to be surrounded by talented people. Chef Vicente Navarrate and catering designer Joanna Navarrete from Table Catering helped me come up with the beautiful food table and the unique menu for the party. I hand braided a 6 foot braid that was tangled around the custom built tower that held the food for the adults. Under the tower were 4 squares of real grass adorned with fresh cut flowers. The kids food table was decorated with a Melissa and Doug Castle set and the wooden dolls that match the castle. I ordered a mini version of the Summer Wind Collection and Summer Wind II Collection from Dainty Delights. The cookies which I named Rapunzel’s royal cookies were scattered inside the castle for the children and parents to find and eat.

We live in Miami and throwing the party in our backyard is always a risk since we never know when it’s going to rain here. I decided to rent a tent and proceeded to use the Chandelier Tutorial on HWTM to make the balls that I strung from the middle of the tent and made into one big chandelier. I then did a 12 yard pennant banner of the patterns I used in the invitation in the three colors in my palette and strung it from one side of the tent to the next. I knew I wanted to incorporate the sun, so I created a purple sun pennant banner that I strung from 3 sides of the tent. Each banner was 3 yards. I decided to use yellow linens for the adult tables and purple (plum) ones for the kids table. I worked with a florist who helped me create the perfect small centerpieces for the tables and food tables. The tables were finished with tea light lanterns from Recession Home. There were 18 lanterns per table and those tables glowed once the sun started to set.

I ordered small crayon rolls from Felt Like Celebrating and I made a personalized flag with every kids name on it, used as place card. I made party hats for the boys and crowns for the little girls. Each child also got a personalized straw (to make it easy for the parents to know who’s drink it was). Knowing that entertaining two year olds can be a little bit rough, I decided to make coloring mats for each one of them. I illustrated Rapunzel and Pascal (each on a separate side of the mat) and wrote Princess Nicole’s second birthday party, the date and art by on them. Once they were done with one side, the kids were able to flip over and draw the other. I also handmade little wands for each of the kids and put them in small cube blumeboxes which I wrapped with ribbon and a sun and placed them next to the drink tables. For the kids, my mother in law found sparkling peach juice at the grocery store that looked like small champagne bottles. We made labels with crack and peel paper and put the bottles on a square cake stand besides the food. The water bottle labels where adorned with sun labels.

I also hired Rapunzel to come and sign and play games with them. She did face painting and danced around with them. Talented baker Brantley Jaramillo from Sweet Brantley’s Cake Designs worked on the tower cake. She incorporated my bright colors. The cake was also purple on the inside once it was cut! How adorable were the little lanterns hanging from it and all the detail in the tower? I was in absolute awe when I saw it!

The bounce house had a sign that read the adventures of princess Nicole and her little lords and ladies which was inspired by the little books in Charlotte’s Princess Soiree on HWTM. The invitation has 3 layers: the flat 5 x 7 invitation, a fold-over purple pattern, a ribbon and sun set on top of that. They were sent in purple envelopes with wrap around customized labels that read Lady or Lord and were addressed from Princess Nicole.

We had a lot of fun at our bright and festive party!