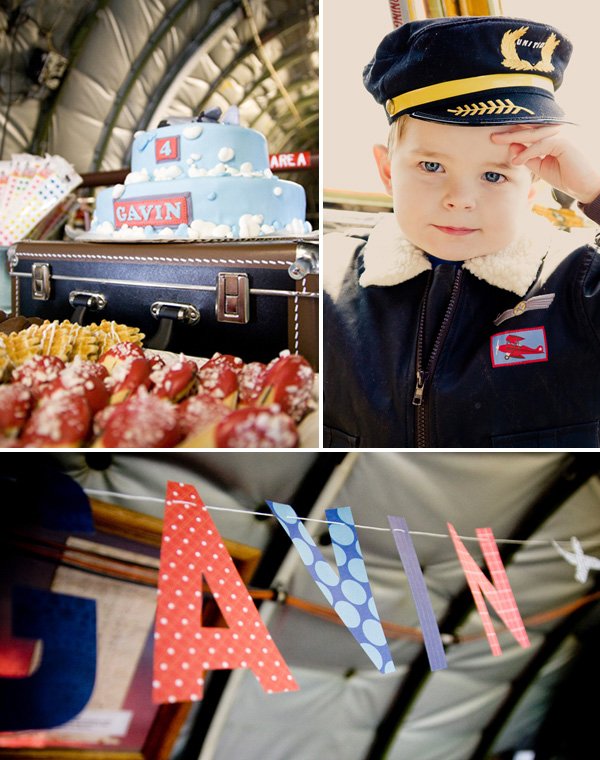 Chrystal Guyette did such an AMAZING job bringing this VINTAGE AIRPLANE theme to life for her son Gavin’s birthday – from the “boarding pass” invitations mailed out envelopes fashioned from old atlases, to clever “in-flight meal style” lunches and bags of blue cotton candy adorned with cloud shaped marshmallows!

The party was actually held inside a historic KC-97 airplane that sits at their local airport (what a fun venue for the kids!), and guests participated in creative activities that were outlined in their “Junior Pilot Training Manuals”. Dad even dressed up as “The Captain” and stamped their manuals every time they completed a task! 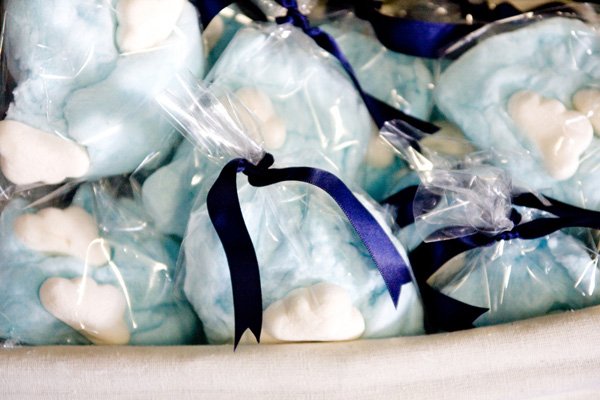 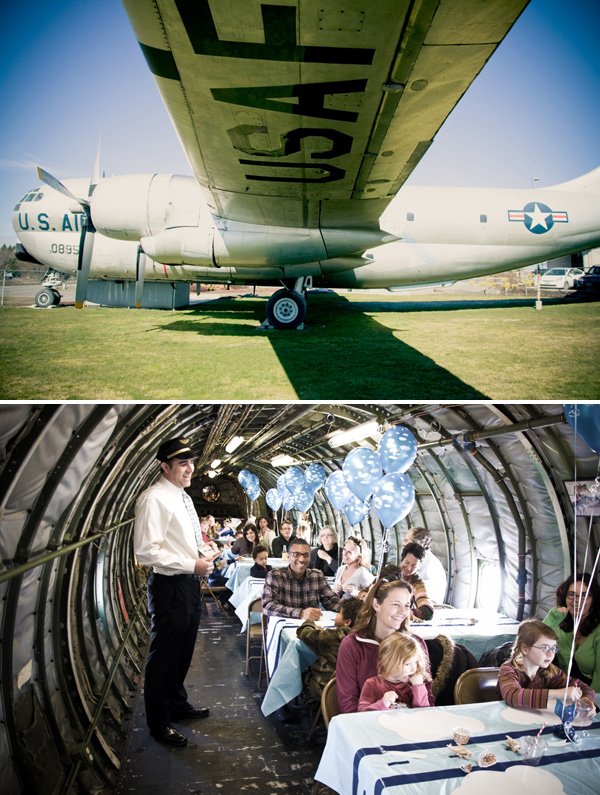 Read on for lots more fun, inspiring images – including adorable “Jumping Geronimo” toy parachuting frogs! – plus all the creative party details from Chrystal… 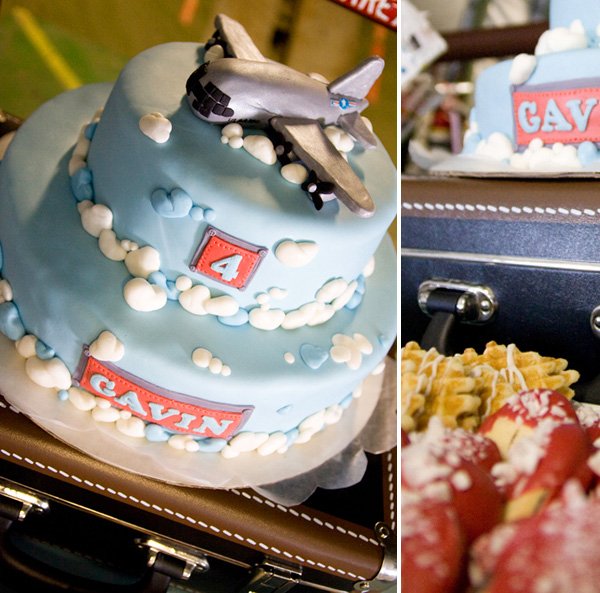 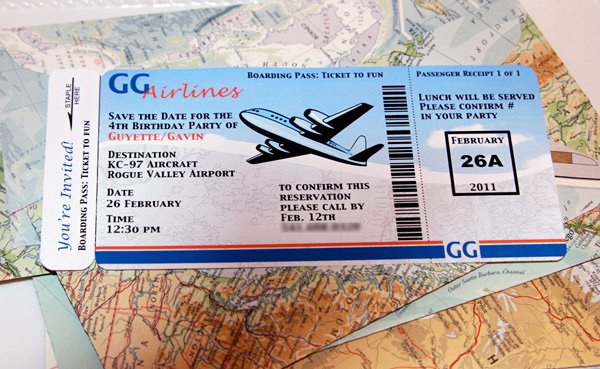 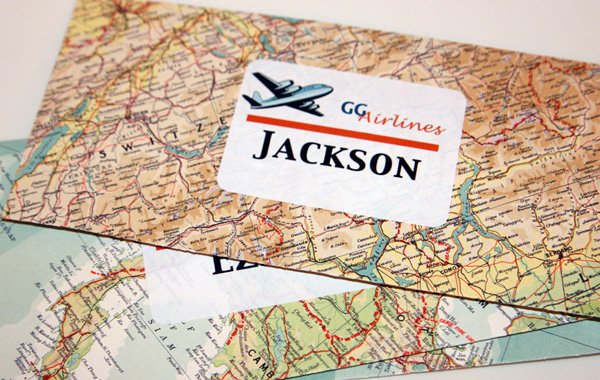 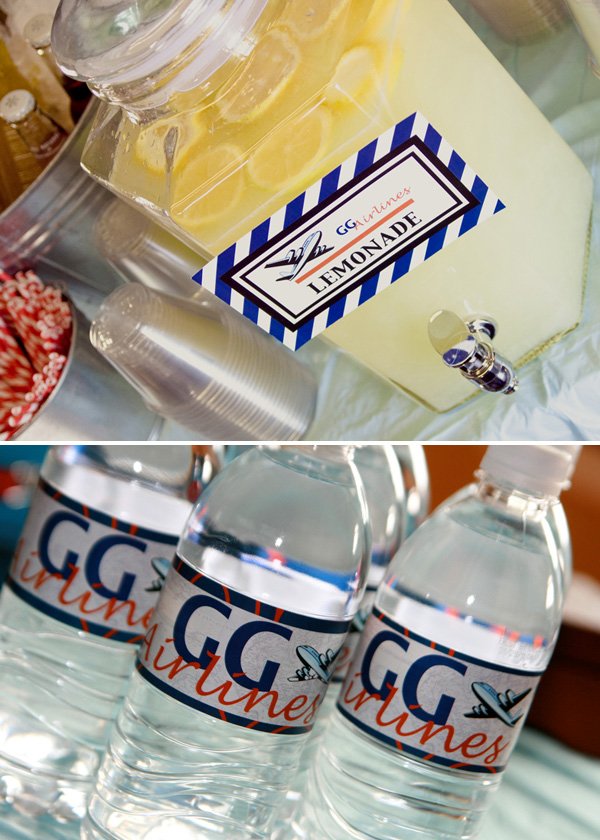 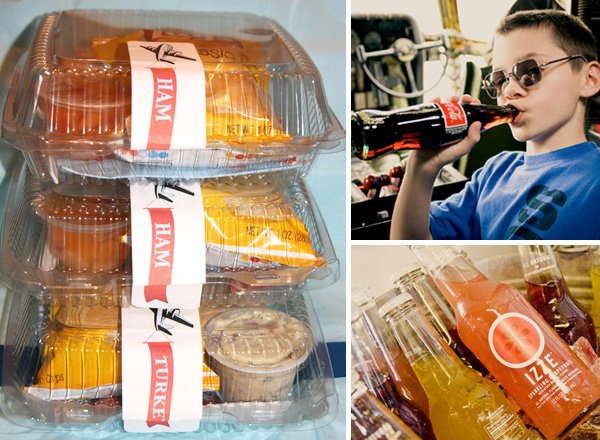 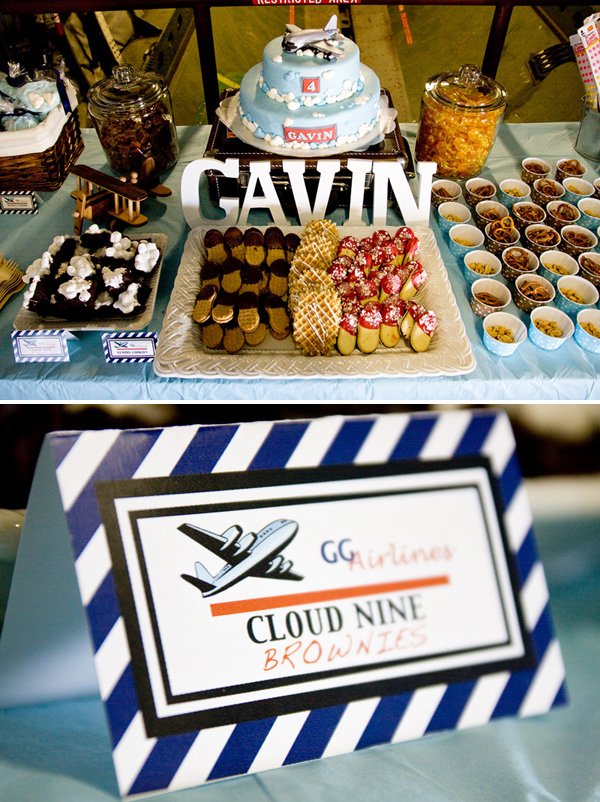 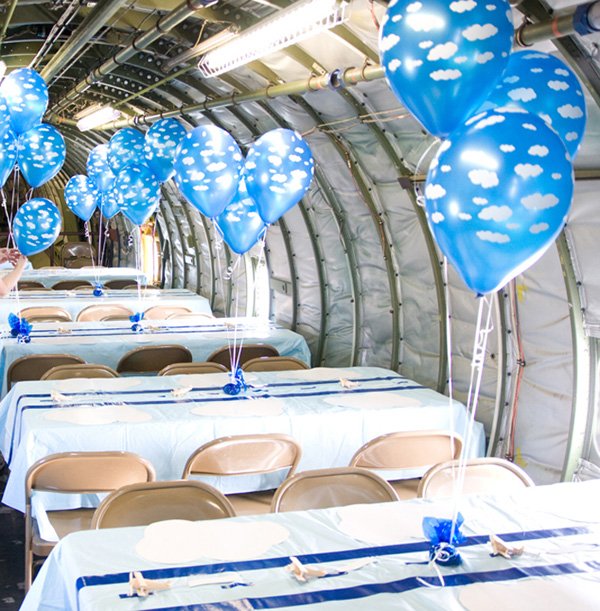 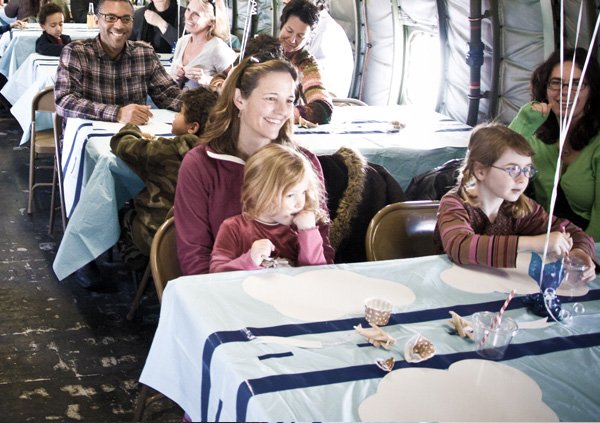 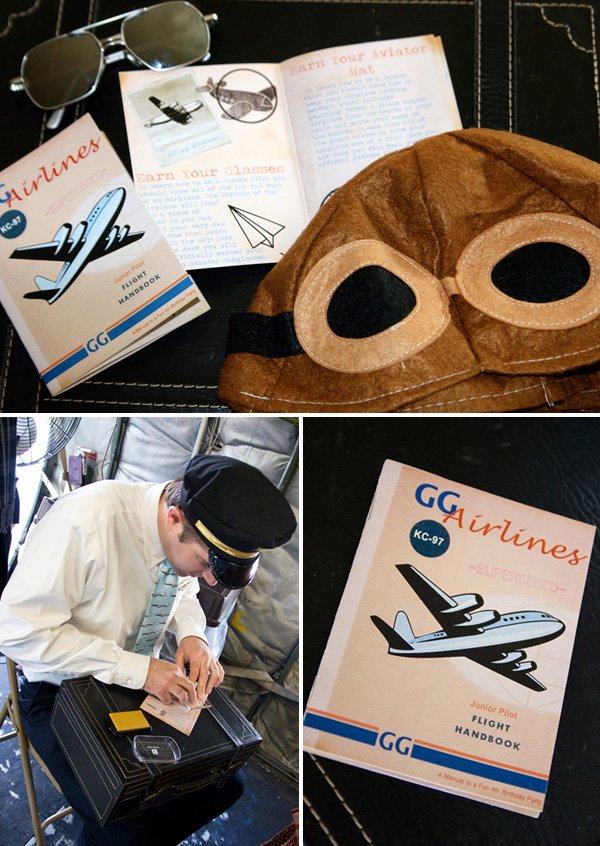 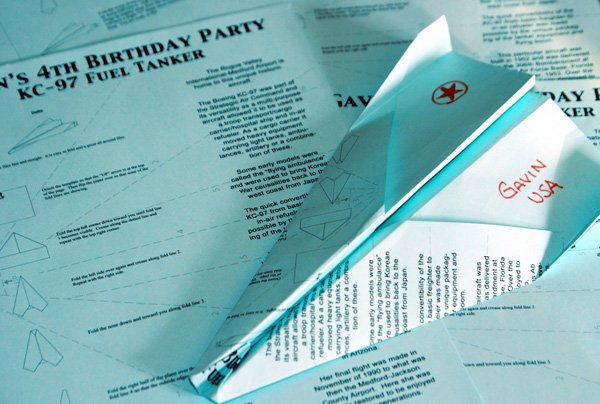 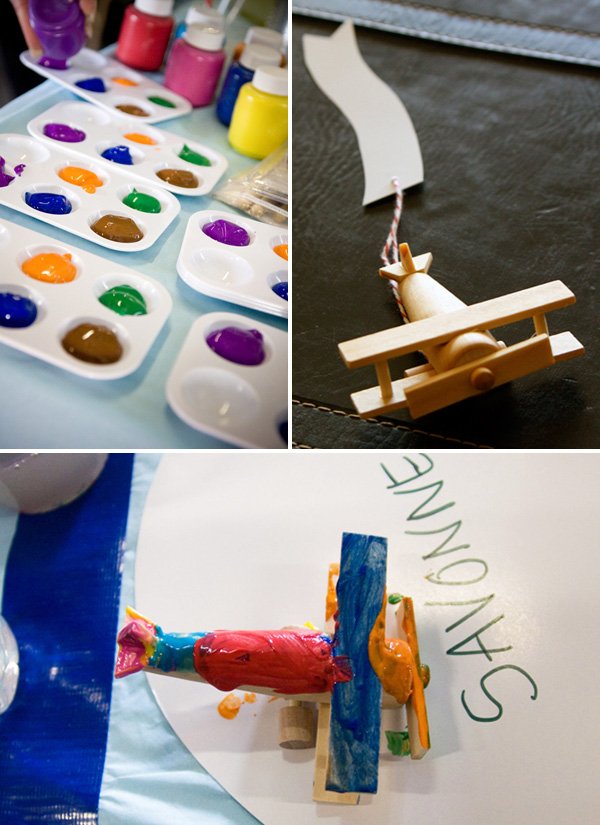 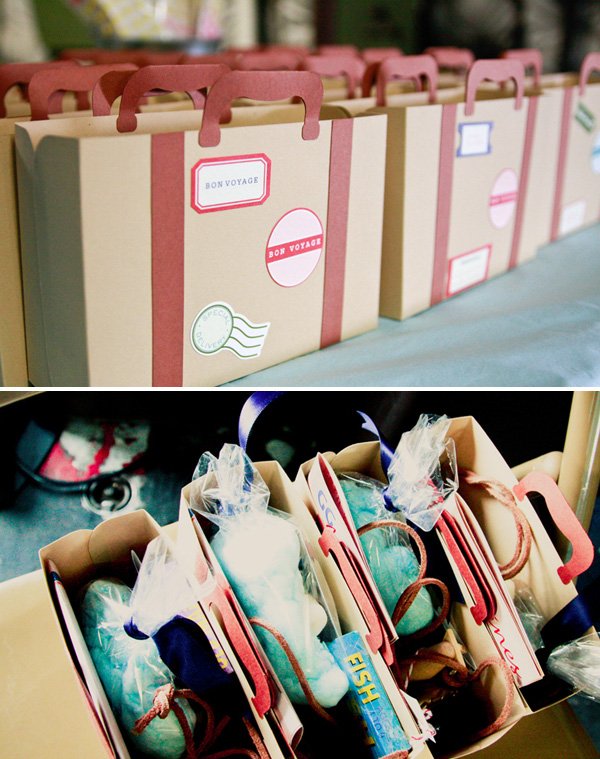 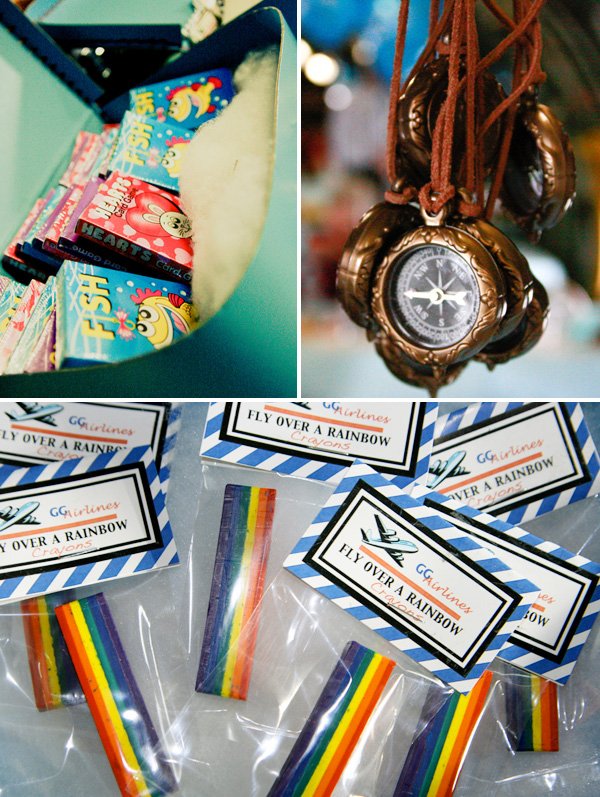 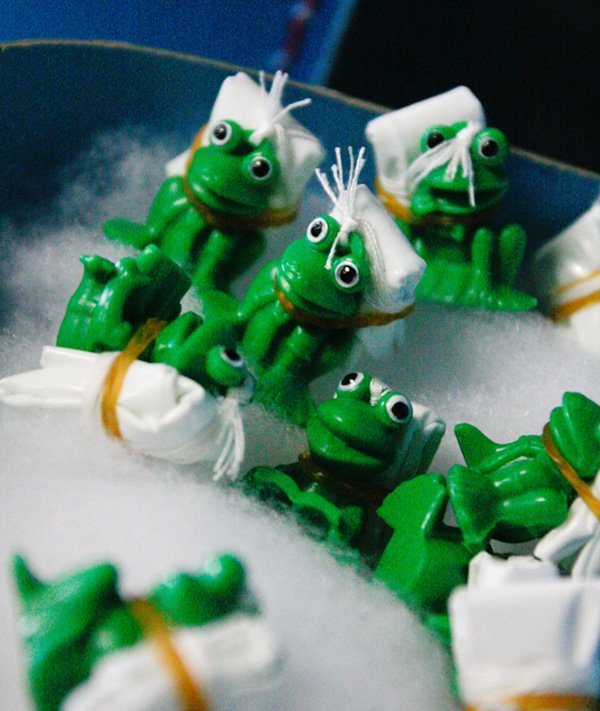 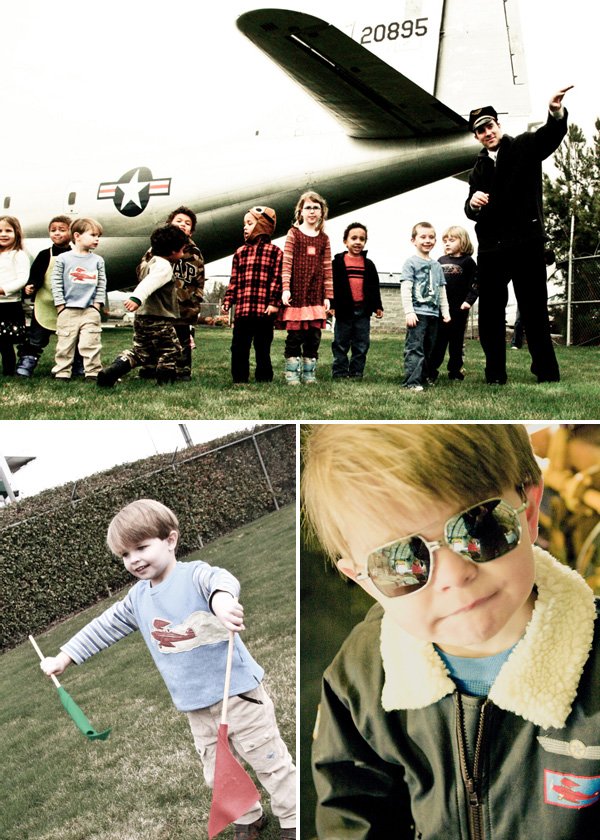 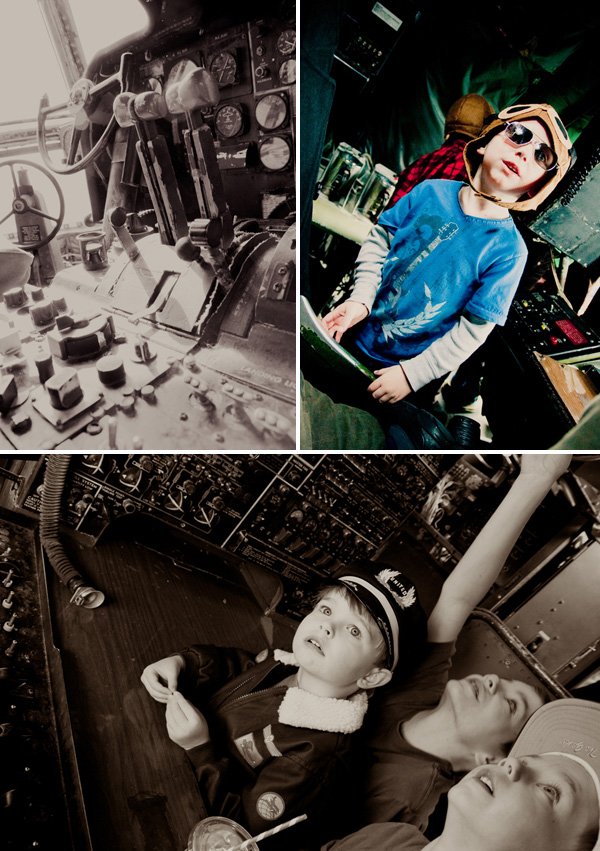 PARTY DETAILS as told by Chrystal…

“For my son Gavin’s 4th Birthday Party, we rented out a historic KC-97 airplane that sits at our local airport. It served as a unique venue and the kids had a blast playing with all of the controls in the cockpit.

To set the theme for the party, I created invitations to look like real boarding passes. Each of them were sealed in envelopes made from old atlases. I referred to similar invitations that others have made in blogs to help come up with the wording for them.

The amazing interior of the plane created a great backdrop for the party! I decorated the tables with light blue paper table cloths. We ran dark blue tape down each cloth to look like runways.  I cut large white clouds out of heavy glossy cardstock to serve as placemats for each place setting.  The center of each “runway” was lined with small wooden airplanes with banners attached to them using baker’s twine.  Bright blue balloons with white clouds on them were placed at the center of each table.

The cake topper was skillfully created to replicate the KC-97 airplane where we held the party.  Molded clouds were then added to the cake below the plane. Alongside the cake I placed cookies, old-fashioned candy buttons, caramels, and butterscotch. I created Fluffy cloud bags out of blue cotton candy with white could marshmallows placed into each bag.

For drinks we used plastic airline cups and lids, and served classic Coke, lemonade, and Izze Sparkling fruit drink. We used red, striped straws for the kids and adults to drink with.

The children were greeted by my husband, who pretended to be ‘The Captain’. He handed out Junior Pilot Training Books. Throughout the party the children were to follow the book and pass each task in order to complete their mission to become a Junior Pilot. After each task they earned a special prize to help with their future flights!

The first task was to learn how to ‘Build an Airplane’. The children were each given paper to make paper airplanes.  The paper had the history of the KC-97 airplane and folding instructions with dotted lines to fold their plane.  After this first accomplishment ‘The Captain’ stamped each of their books and handed out their very own aviator sunglasses.

The second task was to learn how to ‘Paint an Airplane’. The children each took one of the wooden airplanes form the table. They wrote their names on the banners and were given smocks to keep them clean.  Paint was handed out and some beautiful planes were created. After this task, their books were once again stamped and they earned their very own aviator hats made of felt.

After that, the future Junior Pilots all took a lunch break. Each lunch was made to look like an airline lunch, and contained a variety of sandwiches, chips, and snacks.

Their next task was to earn a compass. We strung compasses onto leather lace, so the kids could wear them around their necks. To earn the compass, the children had to take a lesson in navigation, so outside we went to play a game of ‘Red Light, Green Light’. I created red and green flags to look like classic airplane navigator flags.

The final task was to take a test flight with their paper airplane, and all of the kids practiced getting their planes to fly as far as possible.  After that the Pilot signed certificates in the back of their books.  They were given little paper suitcases to pack up all kinds of additional goodies including ‘Jumping Geronimo’ parachuting frogs, “In Flight Entertainment” cards of various kids card games, and also ‘Fly over a rainbow Crayons’.”