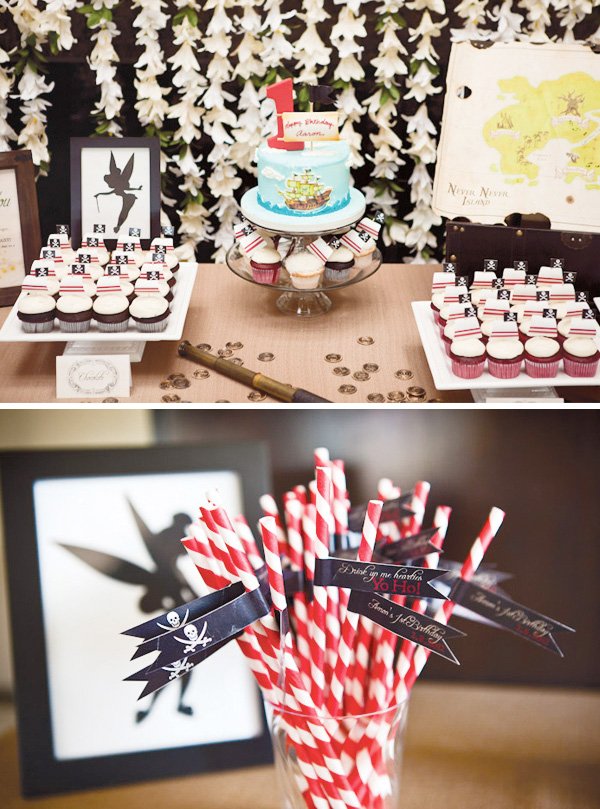 A Pirate Birthday Party…. with a Neverland twist! As a huge fan of Jackie Culmer‘s style already, it’s not the least bit surprising that the latest party she dreamed up is wonderfully creative and full of imagination! {Check out some of her other work here and here.}

As Jackie explains below, “The feeling of the party was to be vintage, classic storybook, with the feeling that we were going away to Neverland.” Mission accomplished! I love how each table was named for a place in Neverland, and how guests were greeted with a “pathway” of glittered stars – or “pixie dust“. And from framed modern silhouettes of fairies and crocodiles to fabulous personalized Root Beer labels, custom straw flags, and more – there’s some serious style in these paper details! Speaking of paper details… you can download a free printable of the cute pirate sail cupcake toppers right here. :) 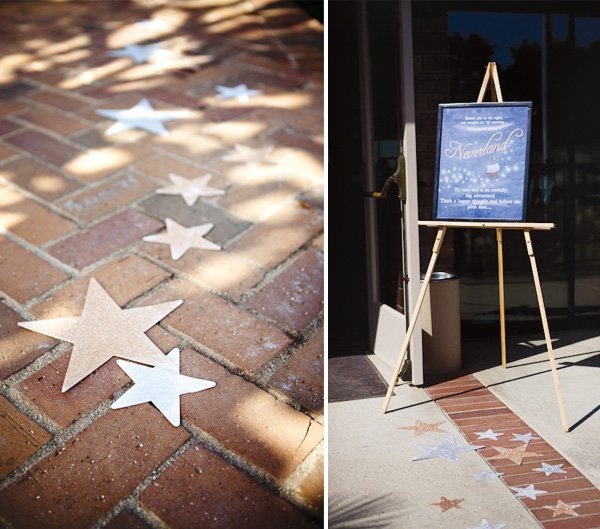 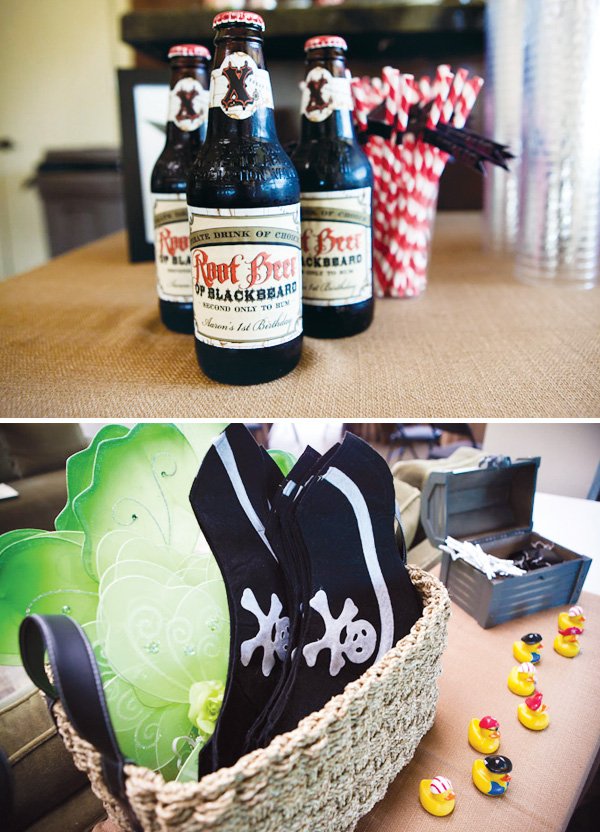 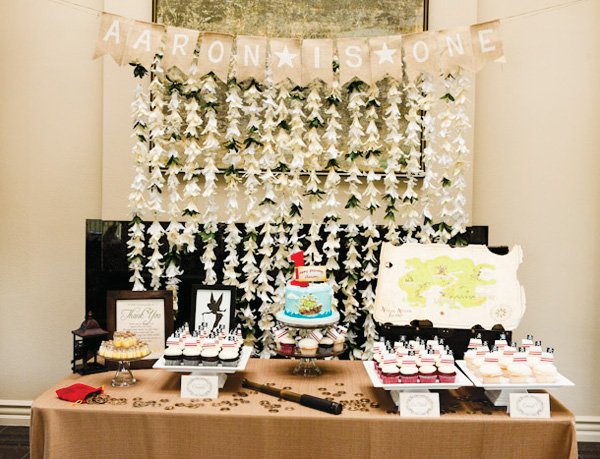 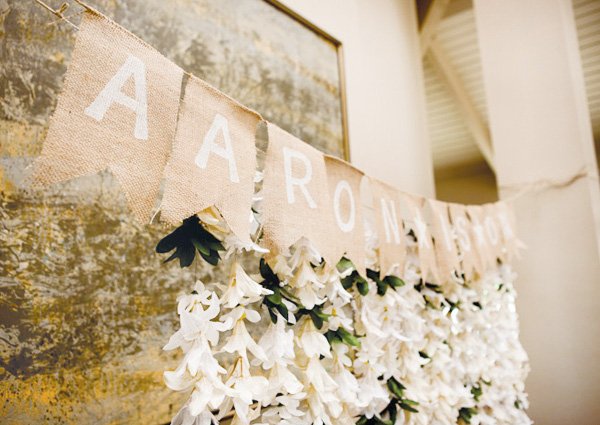 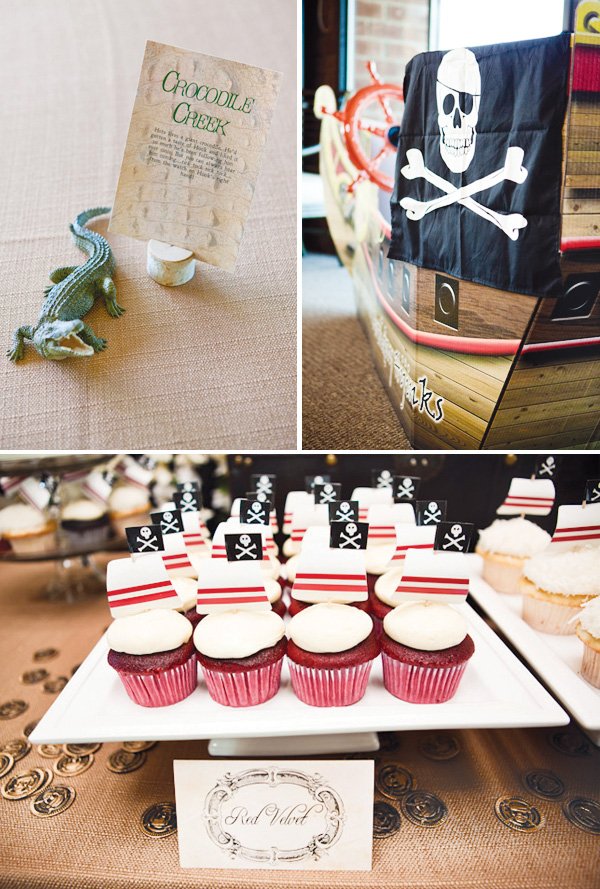 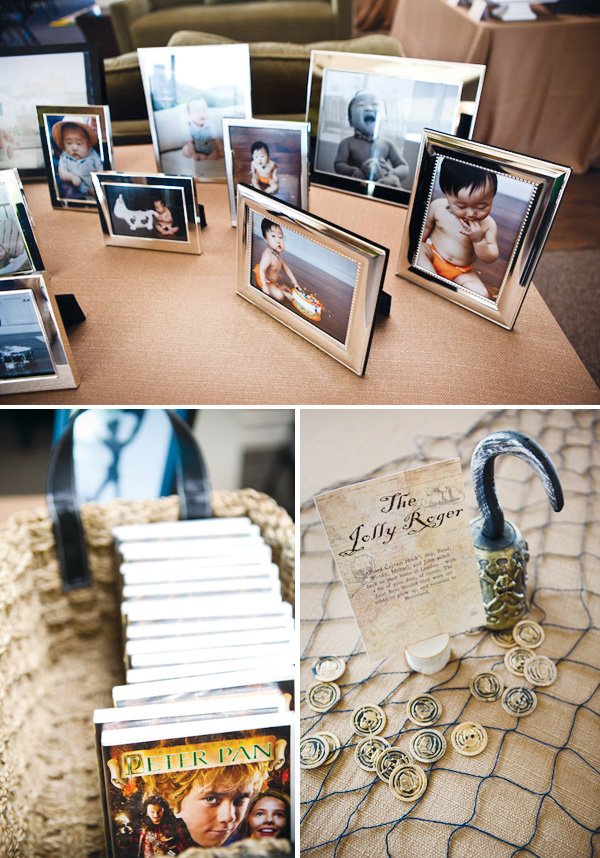 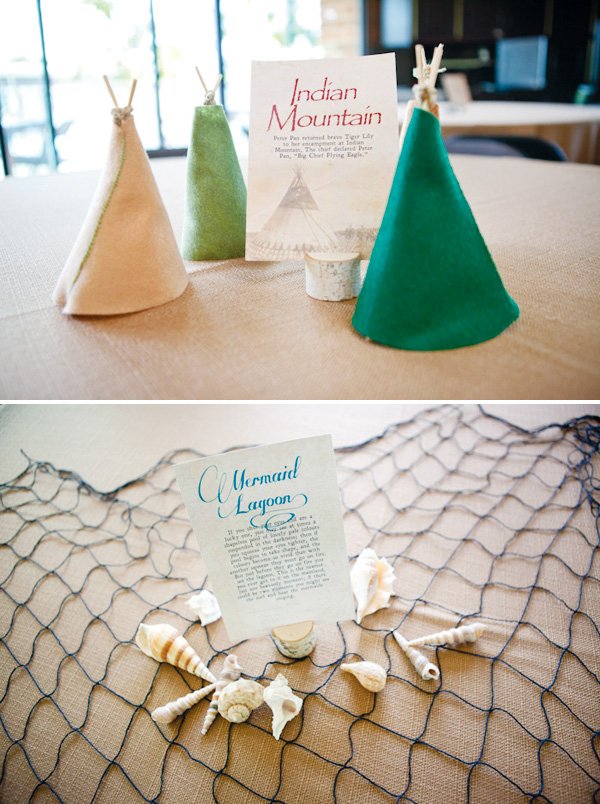 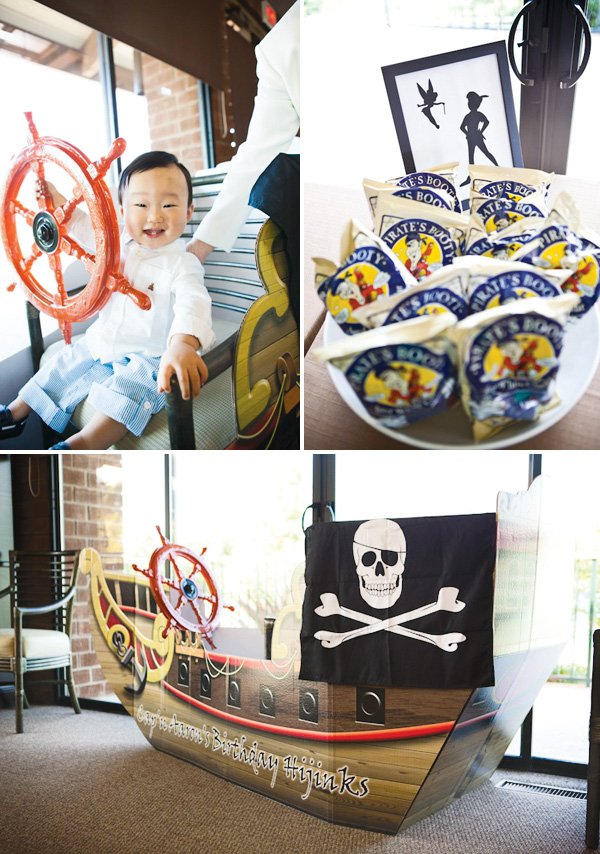 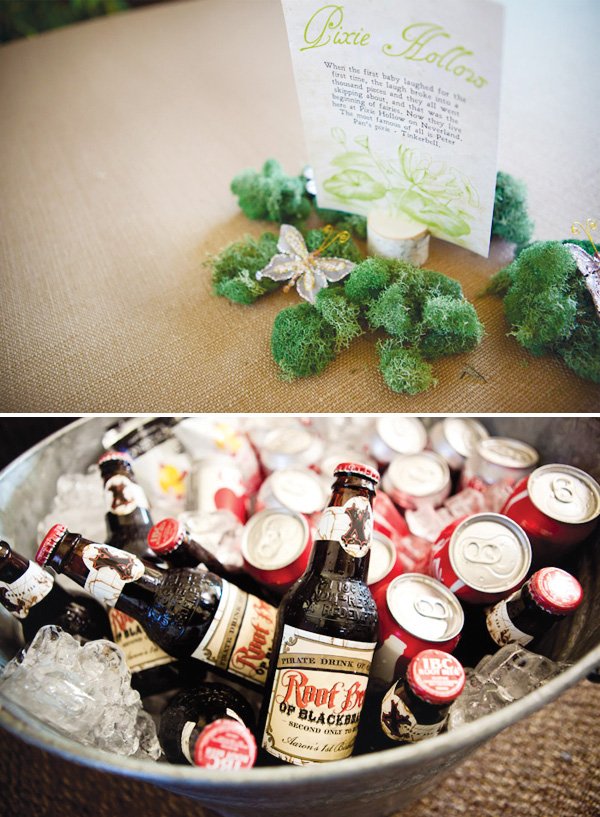 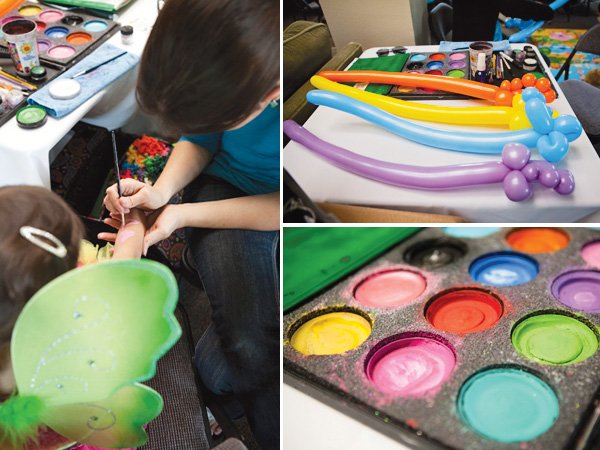 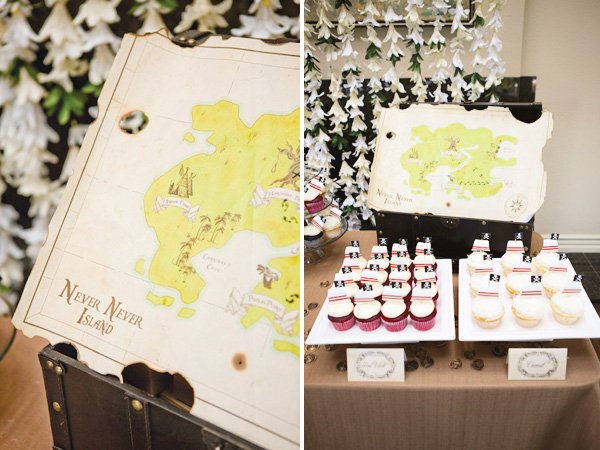 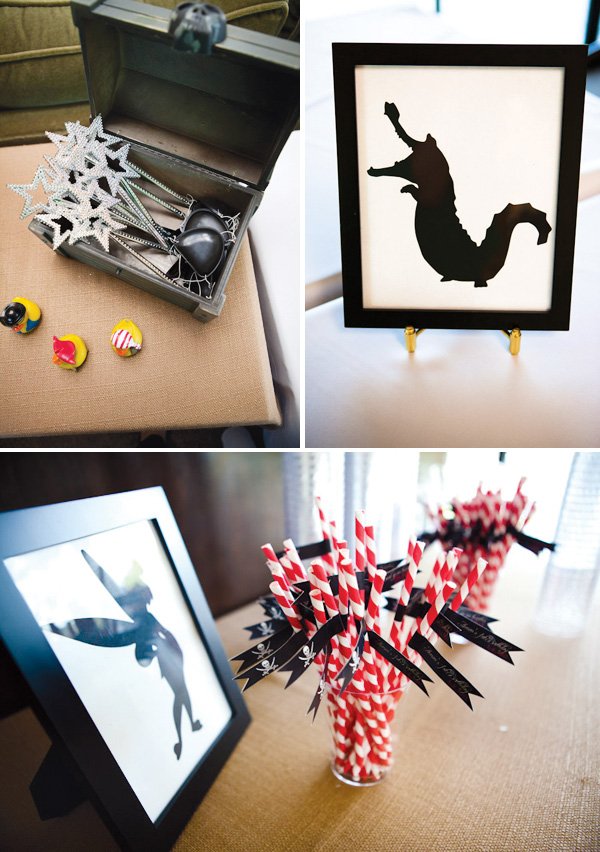 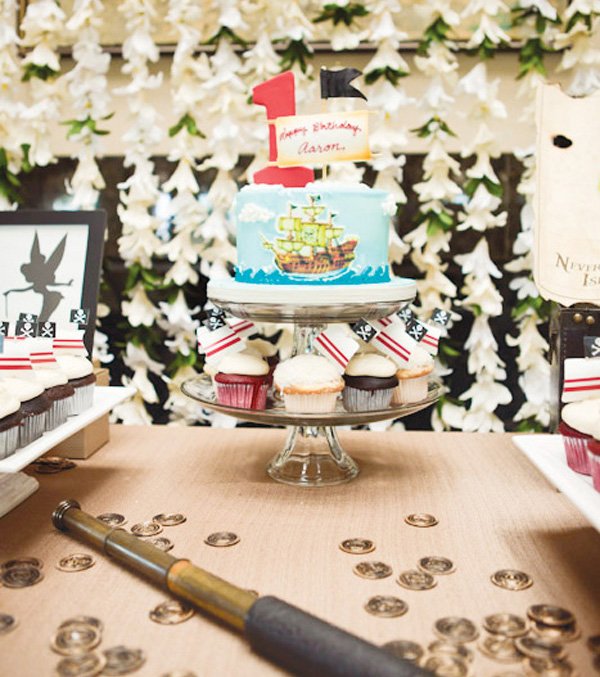 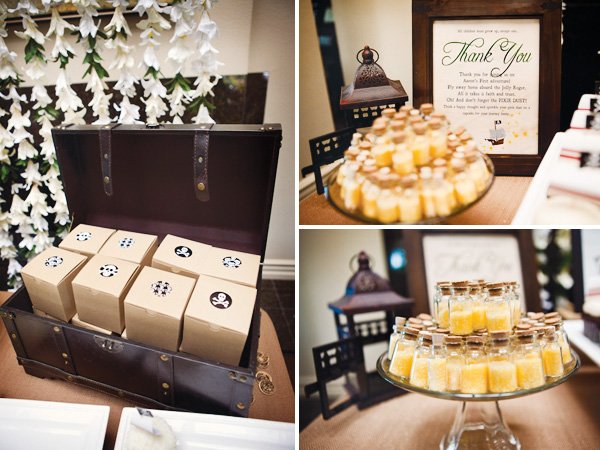 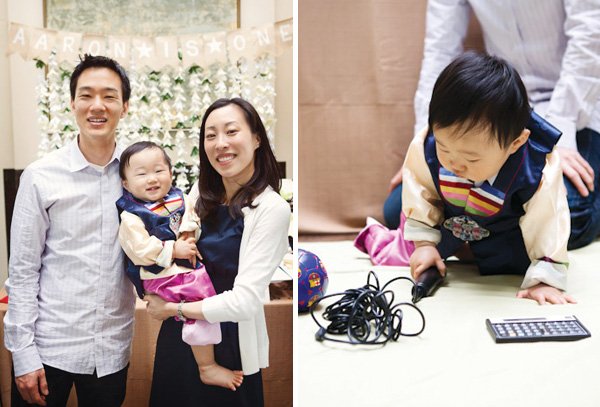 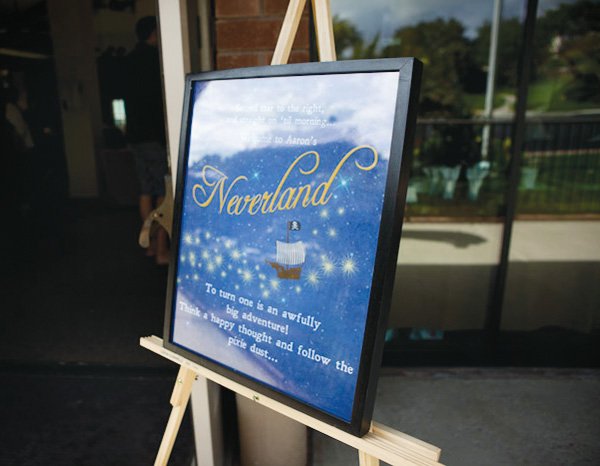 PARTY DETAILS, as told by Jackie…

My client wanted a pirate themed first birthday, and I had been watching Disney’s Peter Pan and Jake and the Neverland Pirates lately with my own daughter and decided to put a Neverland twist to the pirate theme. The feeling of the party was to be vintage, classic storybook, with the feeling that we were going away to Neverland.

The invitation was designed to look like an old book , and the inside included a vintage map of London as a background to the text inviting guests to fly away to Neverland with the birthday boy who had decided he did not want to grow up on his first birthday!

Welcoming the guests to the party was a pathway of glittered stars (an idea taken from Martha Stewart.com) mimicking a trail of pixie dust. I designed a custom welcome poster and changed up one of the lines from the book, “To die is an awfully big adventure.” to “To turn one is an awfully big adventure. Each table was covered in a rustic linen cloth and named for a places in Neverland: The Jolly Roger, Pixie Hollow, Skull Rock, Mermaid Lagoon, Indian Mountain, and Crocodile Creek. I designed each table sign to look like the beginning of a chapter in the book.

The cake/cupcake favor table was to be “Captain Hook’s desk”…we had an old lantern with some pixie dust trails where Hook had locked Tinkerbell up, the map of Neverland with Tinkerbell’s footprints leading to Peter Pan’s hideout, and Treasure Chest, and various other pirate objects strewn about. The backdrop was also inspired by a backdrop BLHDN, but I instructed my client to make her own with a tutorial from the Ruffled Blog. Guests were served amazing food from the gourmet Kogi Food truck (as the family is Korean), and younger guests had fun playing in a pirate ship from ShinDigz, dressing up in pirate hats and eye patches, fairy wings, and wands, and visiting the balloon and face paint artist. Along with DVD’s of the live actions Peter Pan film, guests were treated to “Jolly Roger cupcakes.” In order to fly home with your cupcake, we provided guests with their own “pixie dust” (sanding sugars) to sprinkle.