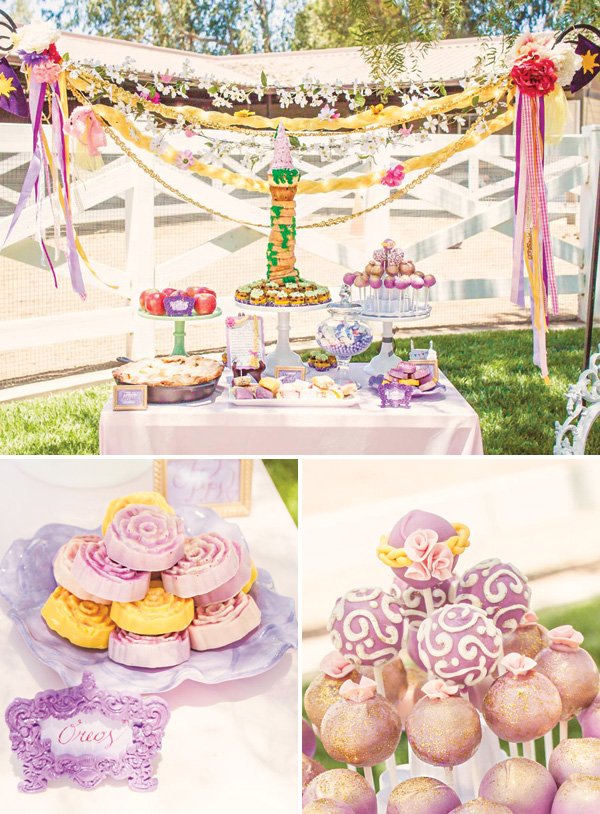 Rapunzel, Rapunzel let down your hair… and get ready to party! Heather Equitz of Heather Equitz Designs whipped up a truly magical celebration with this Whimsical Tangled Inspired Rapunzel Birthday Party for two adorable little girls. Tangled fans will certainly appreciate all of the thoughtful touches from the movie – from pretty purple wildflowers, tons of lanterns, and long braids of golden hair to a cameo from Rapunzel herself. I am especially loving that amazing ivy covered tower donut cake — it definitely defies the laws of gravity! 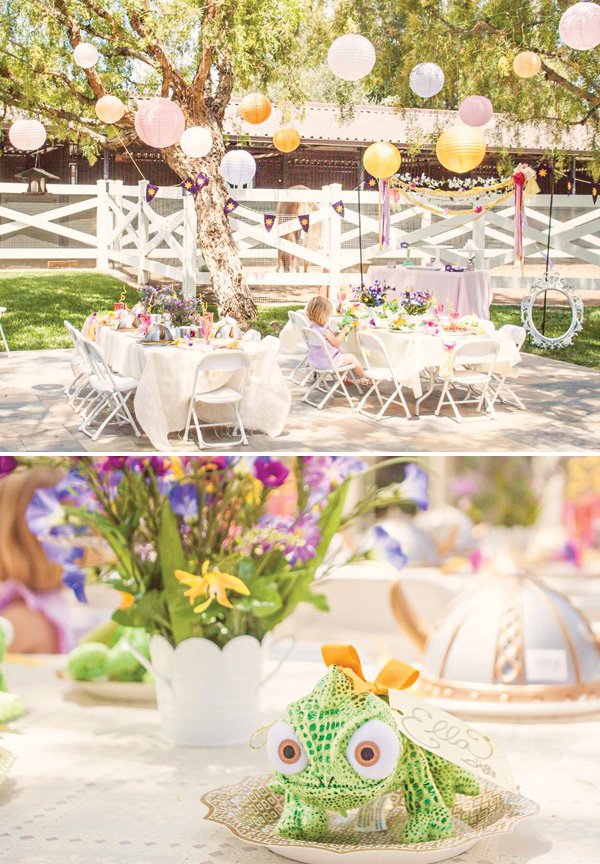 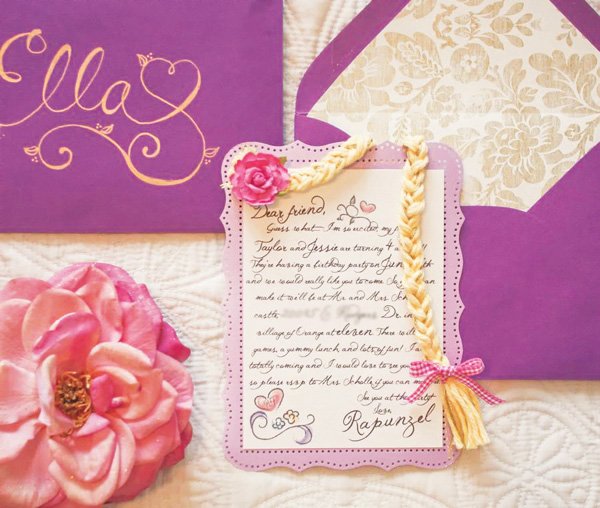 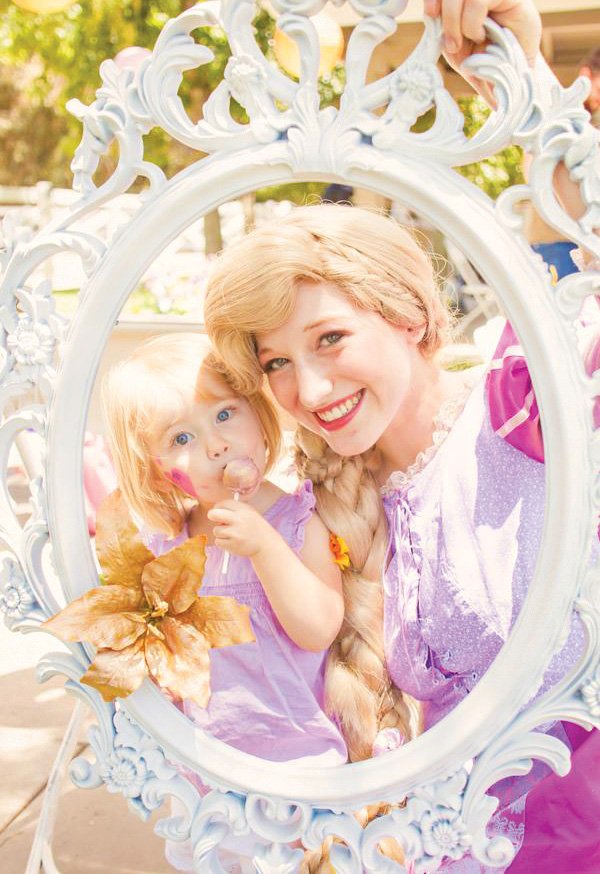 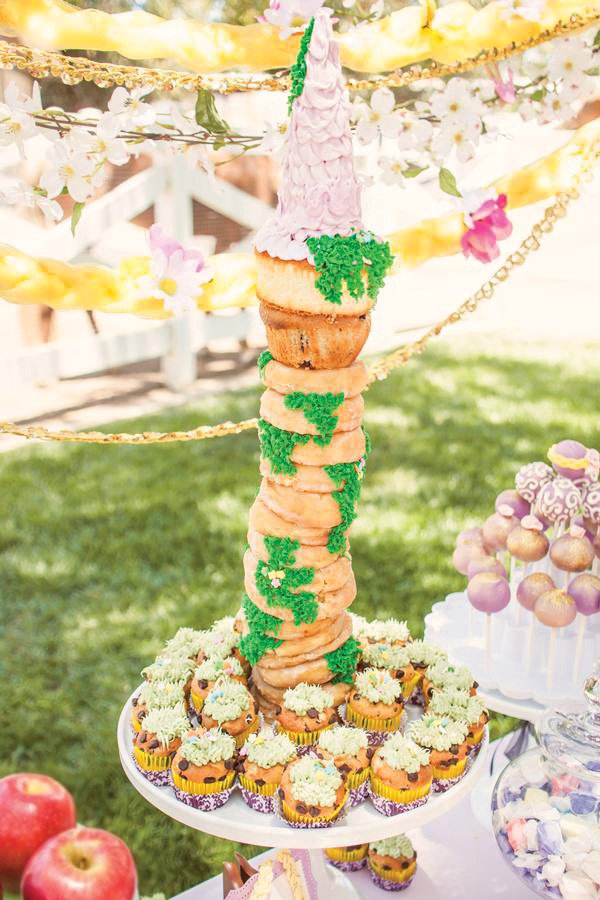 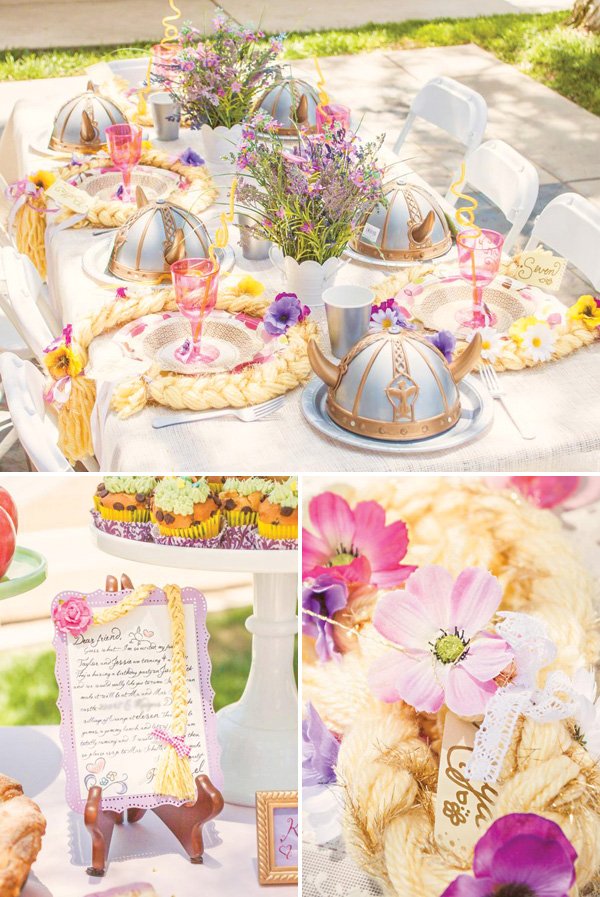 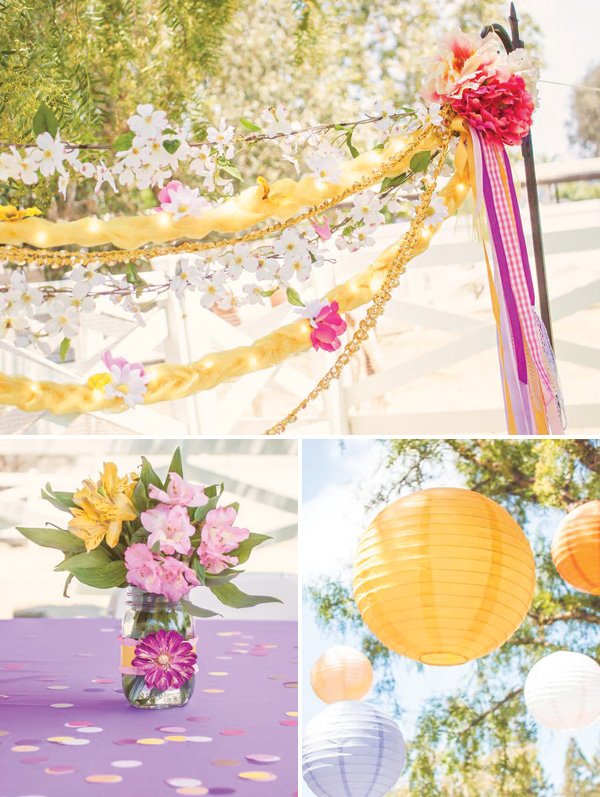 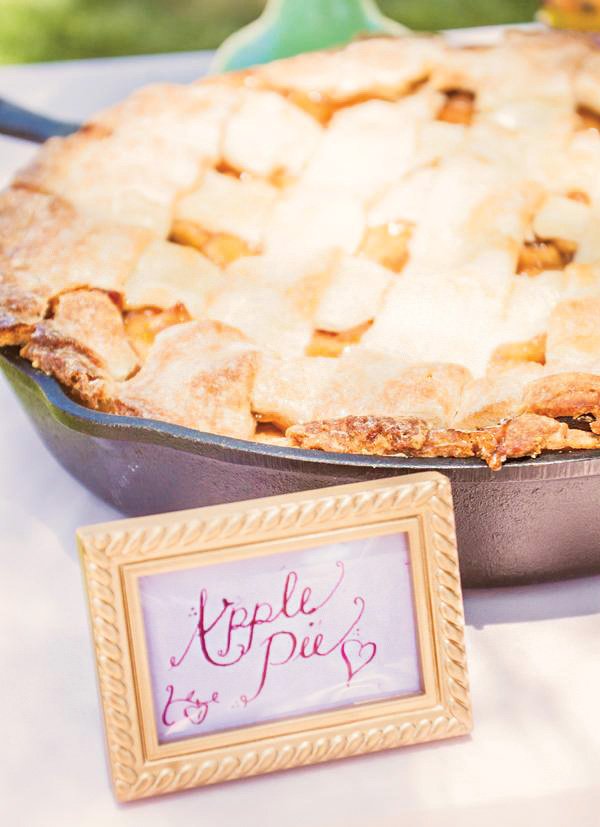 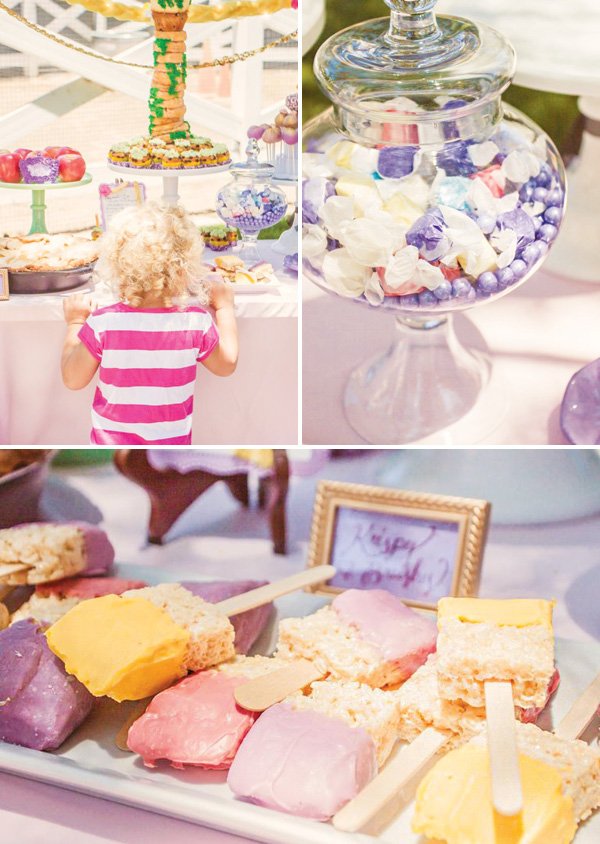 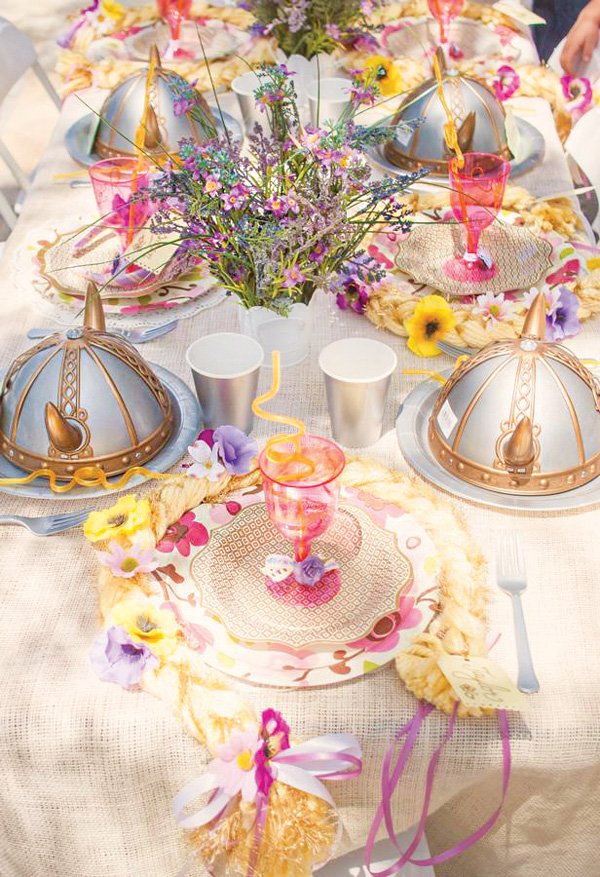 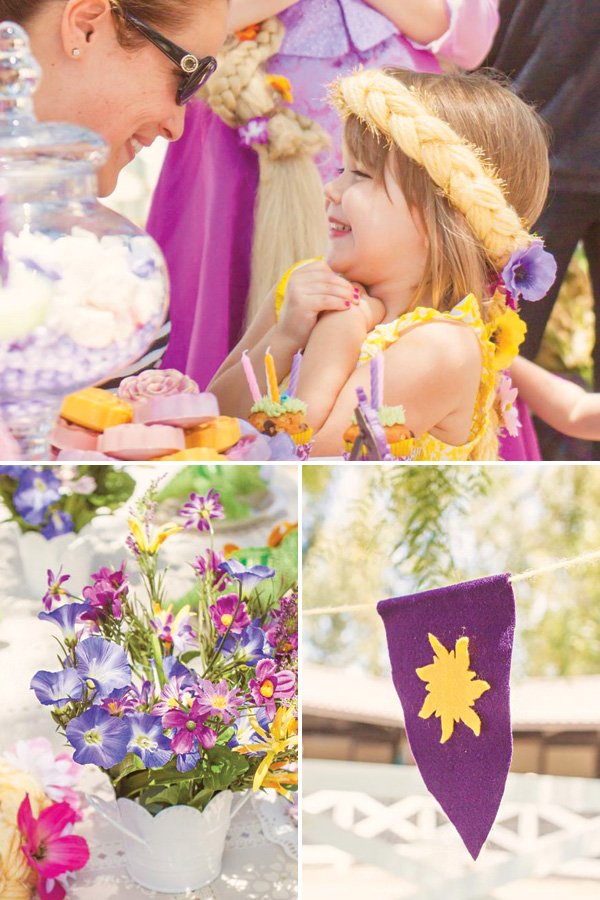 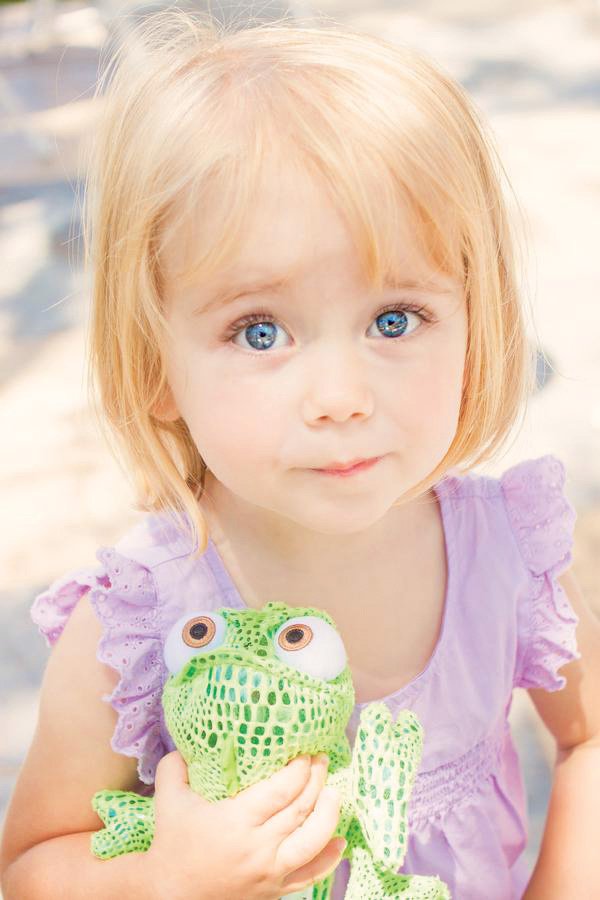 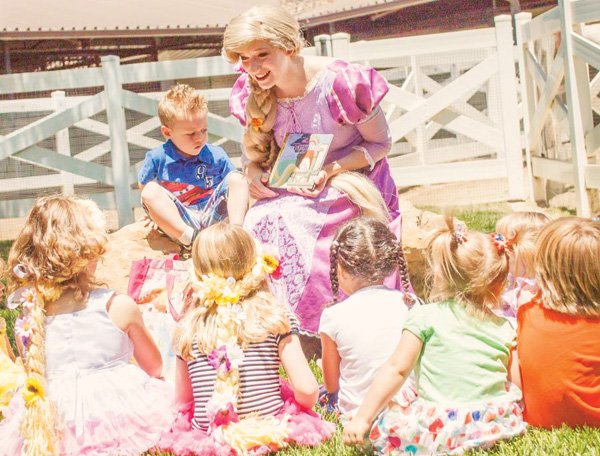 PARTY DETAILS as told by Heather…

The visuals in Tangled are so magical, so when I was approached to style a dual birthday party for two adorable little girls I was thrilled! The clients residence where the party was located was a dream in and of itself! Lots of space, bright light, and green grass.

The custom invitations were in a hand written letter format from Rapunzel to each guest inviting them to the party. The letter was adorned with doodles and sketches, just like Rapunzel would have done. A cotton braid wrapped around the letter. Each envelope was hand lettered with the guests name in gold ink.

I started with the children’s tables. We wanted to incorporate as much of the movie’s charming details as possible, so first thing was first… lanterns, lots of them! I wanted the kids to feel like they stepped into something magical. So, my husband and I (he’s a trooper) along with the birthday dad rigged a system of invisible threads tied together between the canopy trees to form a lattice in which to suspend our lanterns. A few lanterns were spray painted at the bottoms with gold to simulate a glow. They were a hit!

On to the tables. I always make sure never to add fresh flowers in water to little tables for the sake of the parents sanity, so I used sprays of silk wildflowers in low vases… like what I imagine Rapunzel would collect on her first trip out of her tower. Each place setting was packed full of detail. Paper plates that were reminiscent of the heroines painting style and ornate gold dessert plates for the girls and silver plates for the boys (no girly stuff for them… all viking!). Girls received hand lettered cups with yellow crazy straws that mimicked Rapunzel’s locks (which also served as place cards). The favors were placed on the tables and included viking hats for the boys, hand made Rapunzel braid wreaths for the girls, and mini Pasquales for the little ones.

The dessert table was also packed full of details. A Tangled doughnut tower was the centerpiece and was accompanied by Krispy Treat paintbrushes, chocolate chip muffins, rose chocolate covered Oreos, Maximus’s apples, cake pops, and Rapunzel’s apple pie. The backdrop was my favorite part! Lots of tulle was used to make a very long glittery braid with flowers and butterflies, then I wove LED battery powered “fairy lights” into the braid to make it glow! Ribbon, lace, and flower garlands topped it all off.

Last but not least the activities! Rapunzel made her grand entrance and did a wonderful job telling stories, singing, and interacting with the kids who were absolutely smitten. The birthday girls wanted a pinata, so I thought it only fitting that they hit it with a mini cast iron skillet! This was slightly heavy for the little ones but, with a parents help, they thought it was a riot! Rapunzel gave them useful pointers on how to use a skillet while they were hitting! Priceless.

The smile on each tiny guest sparkled. This was one of those parties that made me wanna be a kid again and it’s by far one of my favorite projects.